Setouchi Triennale 2019, Back After 3 Years
Setouchi Triennale is nothing short of a miracle, created by islands on the Seto Inland Sea that overcame environmental pollution and aging population with the power of art. The international art fest, taking place at 12 islands and two ports, will mark its fourth edition this year. And for the first time in three years, we'll have a chance to see islands with their own unique stories and vibrant artworks that are in perfect harmony with them.
Abandoned Sea Meets Art
Japan has its own Mediterranean Sea. The one in Europe is surrounded by three continents. And Japan's version, Seto Inland Sea, is situated in the middle of Honshu, Kyushu and Shikoku. The sea as tranquil as a lake has some 3,000 islands of varying sizes. Inhabitants of those places can't get anywhere without traveling through Seto Inland Sea, and marine products from these waters help them make their ends meet. 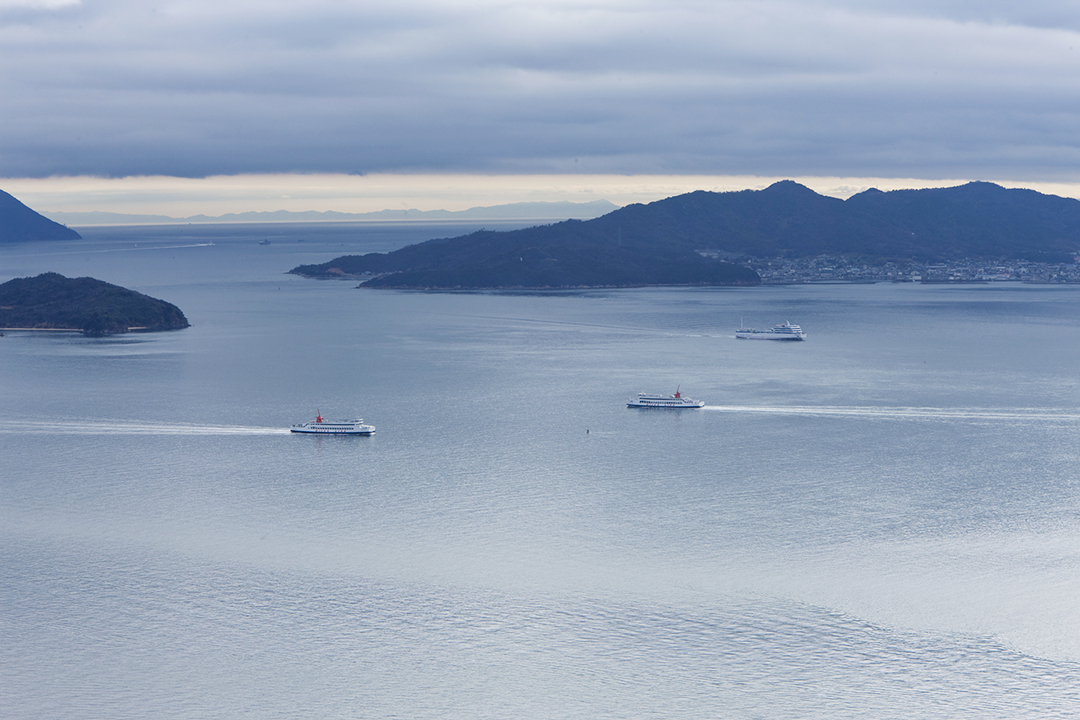 When Seto Inland Sea began suffering from rapid industrialization, islands were badly affected as well. Starting in the 1960s, the sea was covered in waste. One by one, people left these hopeless islands. And it was the sheer drive and determination by an entrepreneur that put an end to this. Soichiro Fukutake, chairman of Benesse Holdings, a Japanese firm with a focus on correspondence education, leaned on the power of art to restore life and nature in the region. He invited renowned architects and artists to abandoned islands and opened art museums. He turned deserted homes into outdoor art installations. And he couldn't have asked for better results. As tourists started flocking to these islands, they became rejuvenated. Residents led efforts to improve the environment as well.
And in 2010, to commemorate the recovery of the sea and to support continued artistic endeavors, Setouchi Triennale was launched. Islands on Seto Inland Sea soon became the popular destination for artists around the world. 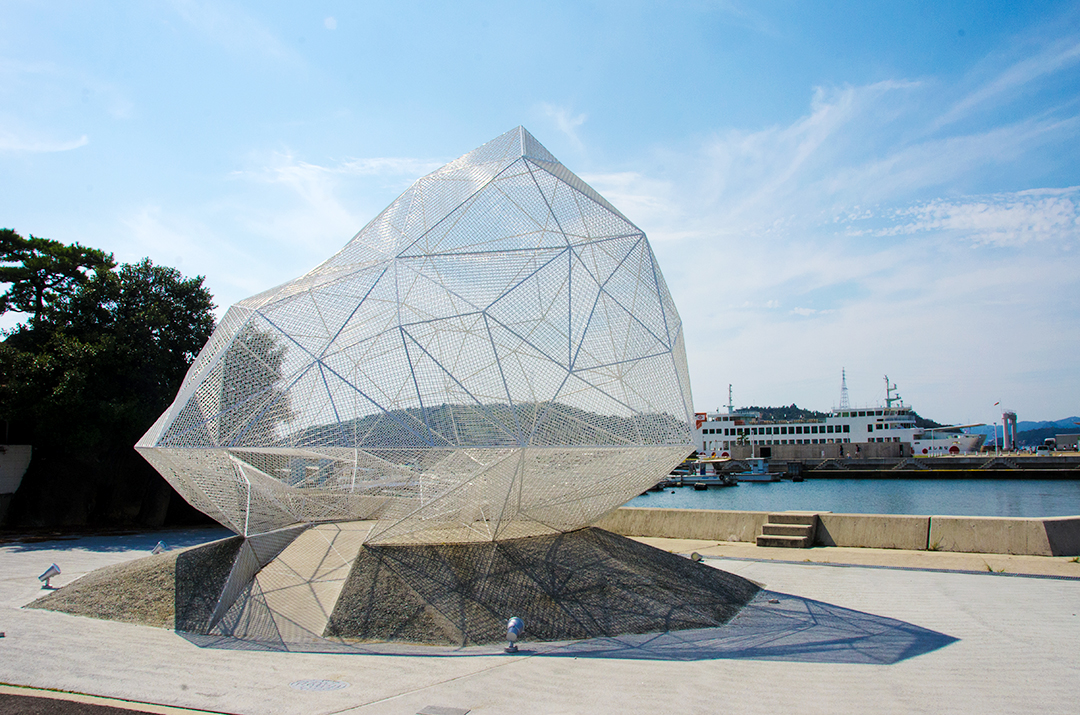 Contemporary Art Festival That Tells the Stories of Islands
Held every three years, Setouchi Triennale showcases some 200 video clips, installations, photographs and paintings, against the backdrop of islands and ports of the Seto Inland Sea. Thanks to its unique concept and high quality of the artworks submitted, the festival has attracted about 1 million visitors for each edition.
But the real value of this festival isn't simply about exhibiting works by famous artists. It's about elevating the history and culture of these islands into an art form. These 3,000 or so islands each have their unique story to tell. And Setouchi Triennale uses the contemporary art as the medium to tell the rest of the world about the beauty of these islands and to help improve living conditions for the residents. 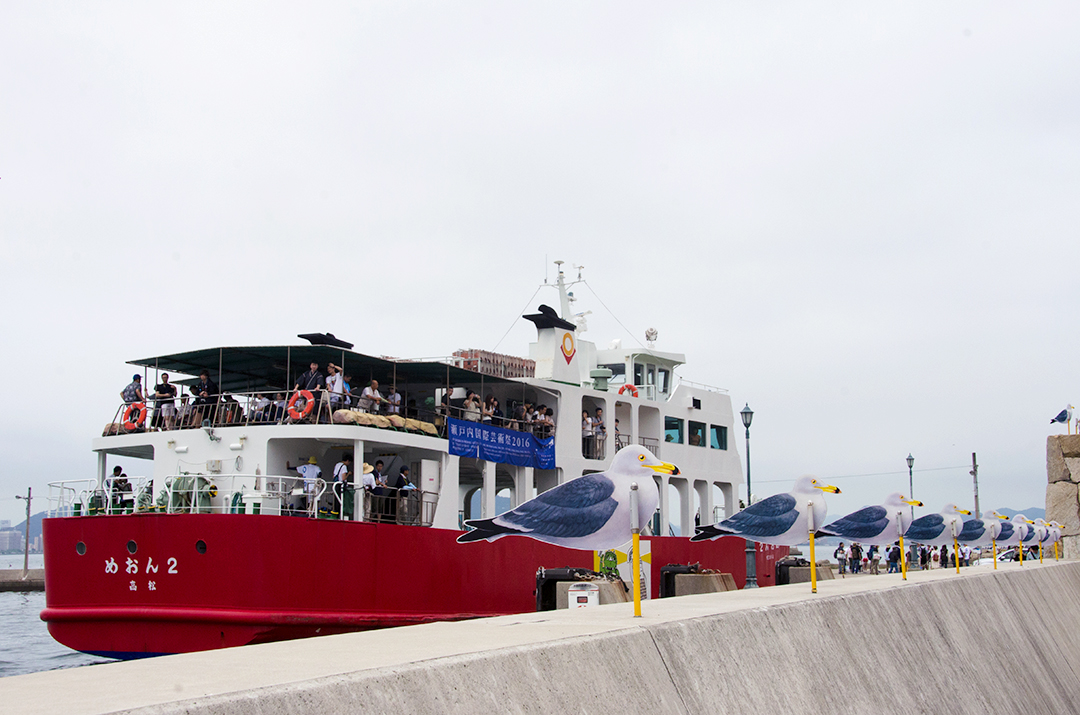 In 2019, the fourth Setouchi Triennale will be held across 12 islands and two coastal cities. This is a perfect opportunity to gauge the state of contemporary art in the wide open, natural surroundings. Let's take a sneak preview into five islands to watch during this year's festival. They're all within an hour from Takamatsu. You should set up your base camp there and spend half a day to a day on each of these islands.

Naoshima: Where the Miracle Began
Naoshima, the starting point of the project that ushered in rebirths of Seto islands, has been coping with environmental pollution since a copper smelting factory opened there in 1917. Following his father's wishes, Fukutake built an international camping ground there. 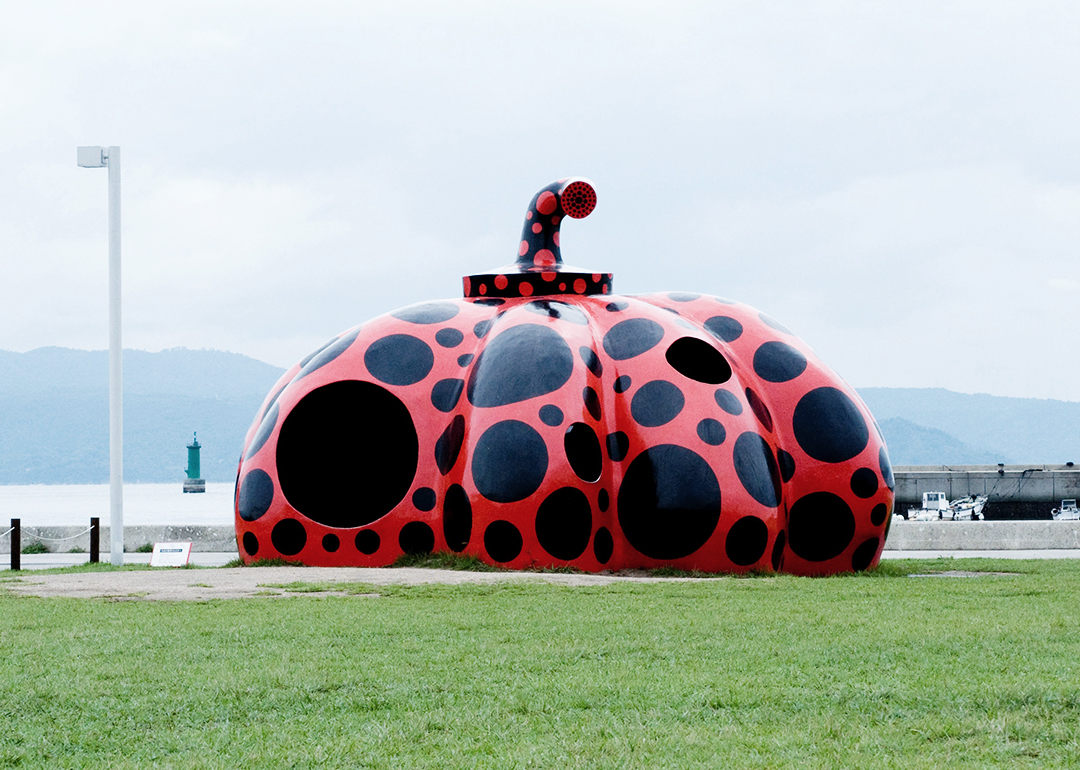 In 1992, Benesse House Museum, which combines an art gallery, a hotel and a restaurant, opened on Naoshima. Then the reservation-based Chichu Art Museum and the Lee Ufan Museum, known for its Oriental beauty, followed. The Ie Project, which turned old homes into installation art, and 'Red Pumpkin' and 'Yellow Pumpkin,' installations by Yayoi Kusama set up along the beach, will catch your eyes. The 2019 Setouchi Triennale will make the most of existing facilities, and will also expand participatory projects in conjunction with local schools. You'd need a full day to really enjoy Naoshima.
Teshima: From Island of Waste to Island of Prosperity 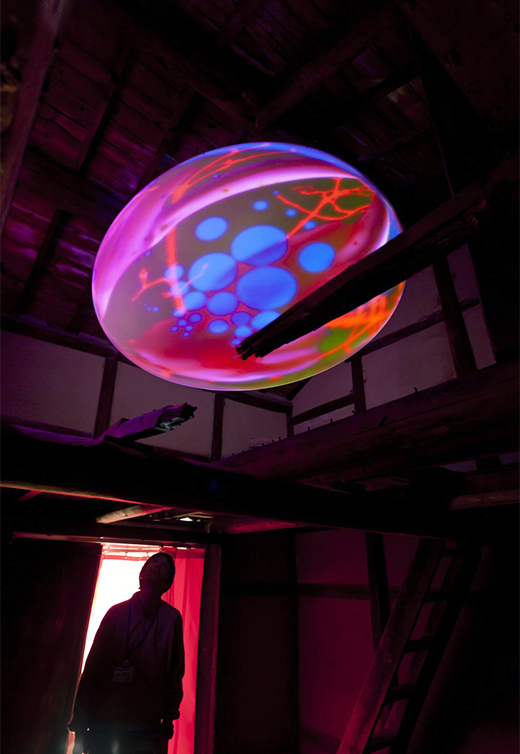 Your First Color by Pipilotti Rist © Photo by Osamu Nakamura

Teshima, which means 'the prosperous island,' was a rare fertile ground on the Seto Inland Sea for rice and fruits. But it was later revealed that a nearby city was illegally dumping industrial waste there for 15 years starting in 1975, and Teshima came to be known as the island of waste. When agricultural produce from Teshima got pushed aside, residents there lost their livelihoods, and the population gradually declined. But in 2010, under the guidance of Fukutake, the Teshima Art Museum opened, and some distinctive installation pieces began popping up across the island. The recovery was underway, both for the nature and people who lived there.
'Distant Memory,' created by the Japanese installation artist Chiharu Shiota with the help of the local residents, is the one piece that stands out on Teshima. They created a tunnel with some 600 pieces of old wooden fittings. They may seem all randomly arranged, but each piece contains memories of people who once used them. 'Your First Color' by the Swiss video artist Pipilotti Rist is also an impressive work of art. This year's Setouchi Triennale will feature existing artworks alongside never-before-seen pieces. We recommend you start your journey from Takamatsu early in the morning and spend about half a day on Teshima. 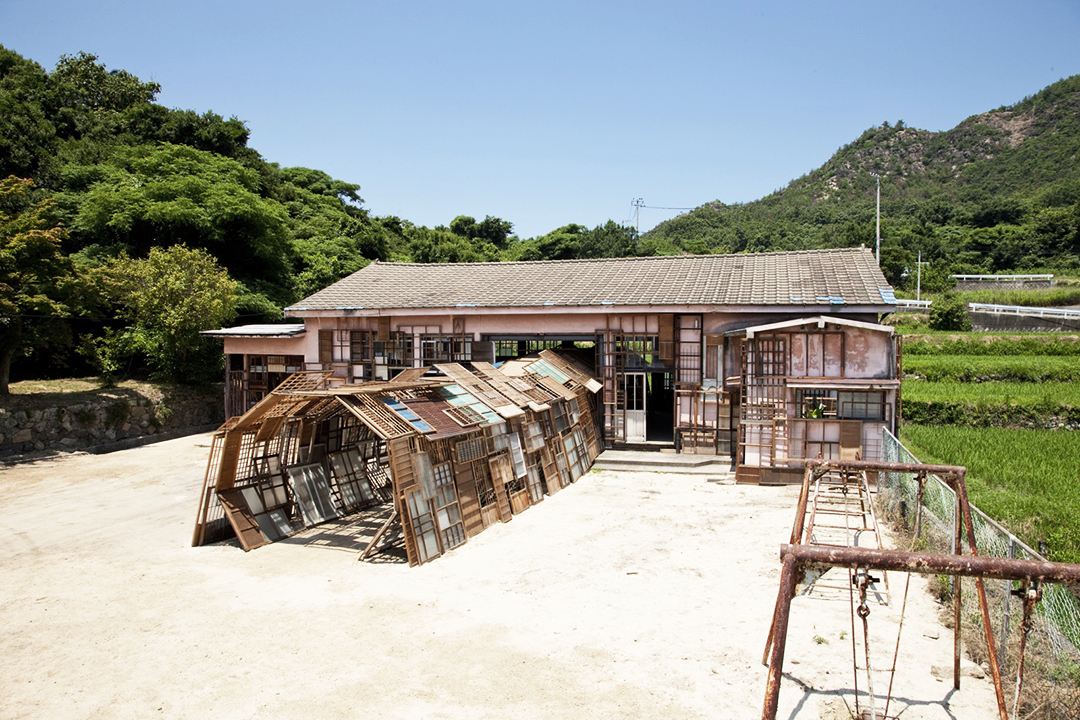 Ogijima∙Megijima: Islands for Cats and Demons 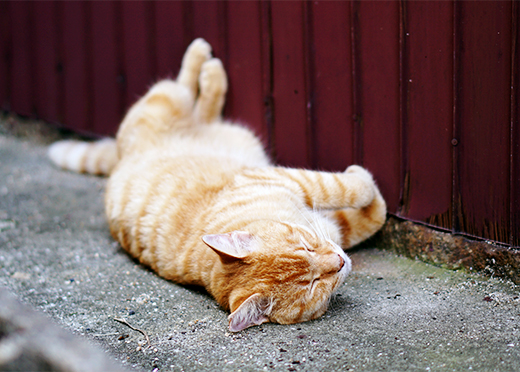 Ogijima, just 4 kilometers in circumference, has so many stray cats that it's called 'the Cat Island.' As it joined the Setouchi Triennale in 2010, many installation pieces were erected across the island, and alleys wee dotted with colorful murals. Walk through some quiet fishing village, say hello to cats along the way and check out artworks hidden in different corners. For this year's Setouchi Triennale, you'll see more homes turned into art pieces.
Megijima is an island for demons. In 1914, a huge cave was found on Megijima, and it resembled the one from the 'Legend of Momotaro,' a Japanese folklore. This year's art festival will showcase many pieces related to Momotaro's legend. A store popular among local residents will also showcase its artistic side. If you take a ferry from Takamatsu bound for Ogijima, it will pass through Megijima. You can visit both islands on the same day. 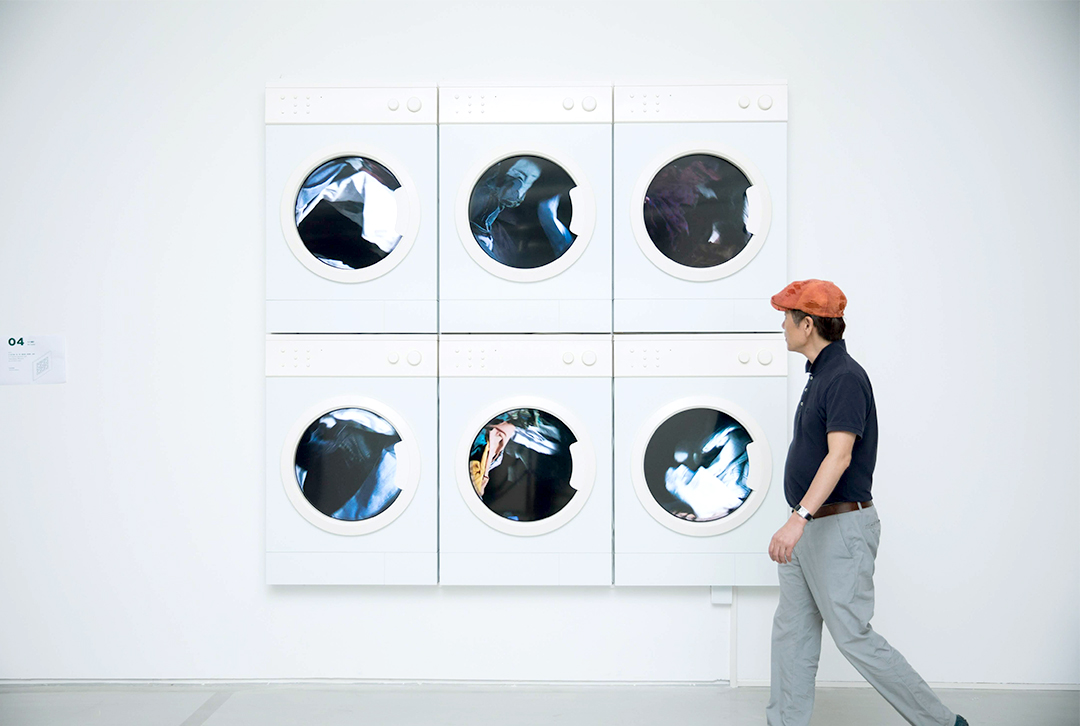 Oshima: Art Heals Wounds
Oshima has a tragic history as a leper colony, where those suffering from leprosy were forced into a sanatorium, much like Sorok Island in Korea. Oshima Seishoen, a national sanatorium that opened in 1909, is still in operation for patients who have nowhere else to go. The Setouchi Triennale allowed the locals here to connect with visitors by exhibiting everyday items for patients and using the sanatorium and its facilities for art. Accustomed to discrimination, patients got to experience new life by coming in contact with people from the outside world at the triennale. This year, artworks will continue to help heal wounds and plan a better future for the island. This year, 'Beautiful Distress,' a video by the Dutch artist Christiaan Bastiaans about lepers, will bear watching. Works on Oshima will be exhibition on the second Saturday and Sunday of the month. You have to book your visit by e-mailing to info@koebi.jp. 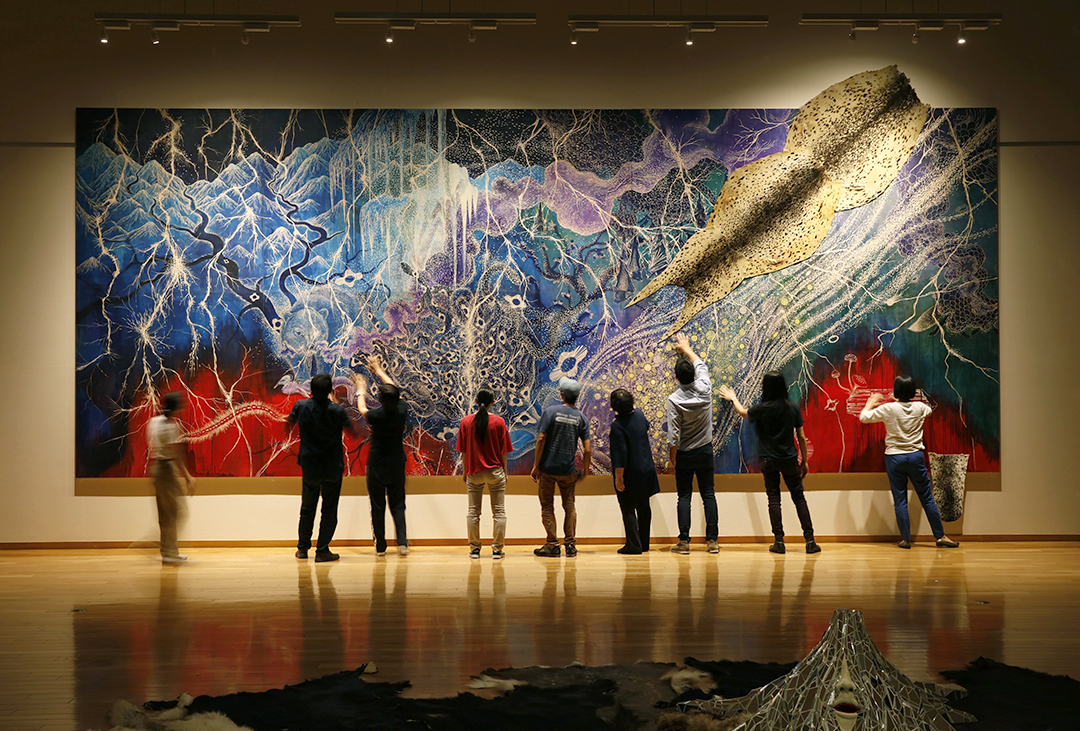 Information: How to Best Enjoy Setouchi Triennale
Buy your 'Passport' for the full experience of the Setouchi Triennale. It will cover all museums except for Chichu Art Museum and Lee Ufan Museum. The '3 Season Passport' will give you access to the first three seasons of 2019, and the '1 Season Passport' is valid for one of spring, summer or autumn. Go see the artworks that paint the beautiful picture of the Seto Inland Sea, and savor the precious meeting between art, people and nature. 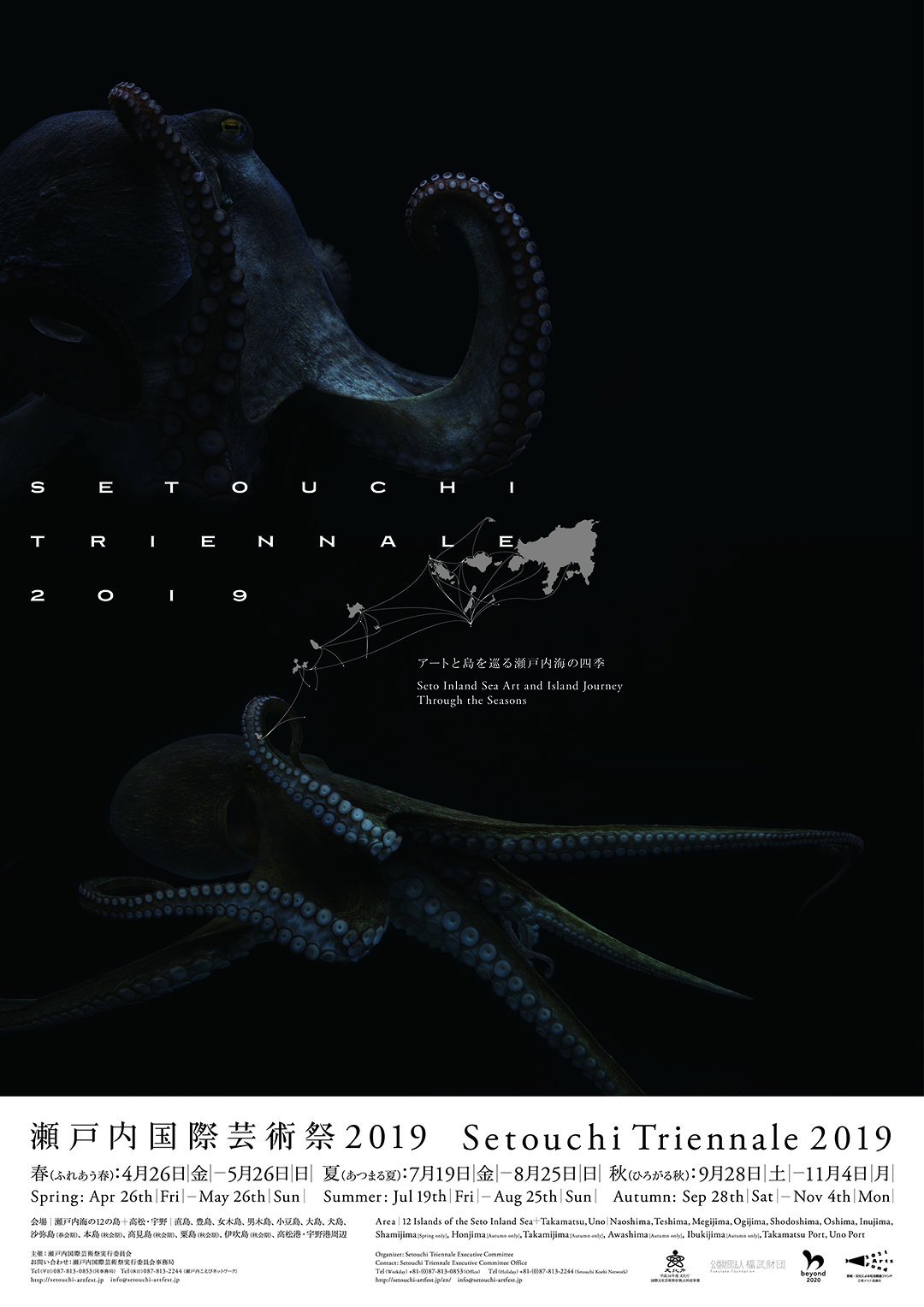