One-of-a-Kind Glass in the World
Ahwon Gongbang is a metal craft studio opened in 1983. They not only deal with metal arts, but also feature craft items using other materials such as these glistening glasses. 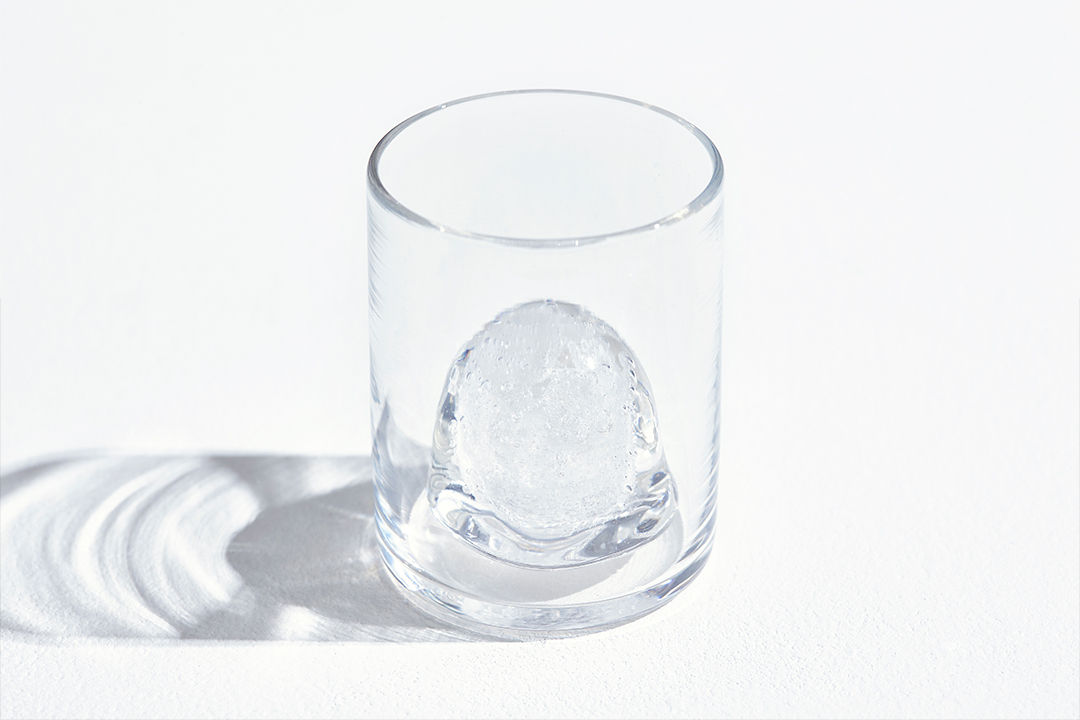 Lee Tae-hoon’s Icy Glassware
A teddy bear with wads of cotton coming out of it. It is no ordinary stuffed animal. This teddy bear is made of glass, not fabric. Artist Lee Tae-hoon encourages fresh imaginations to be formed in regards to ordinary objects. The small glasses appear to have a frozen ice cube inside, giving a feeling that whatever goes in there would always be kept cool. 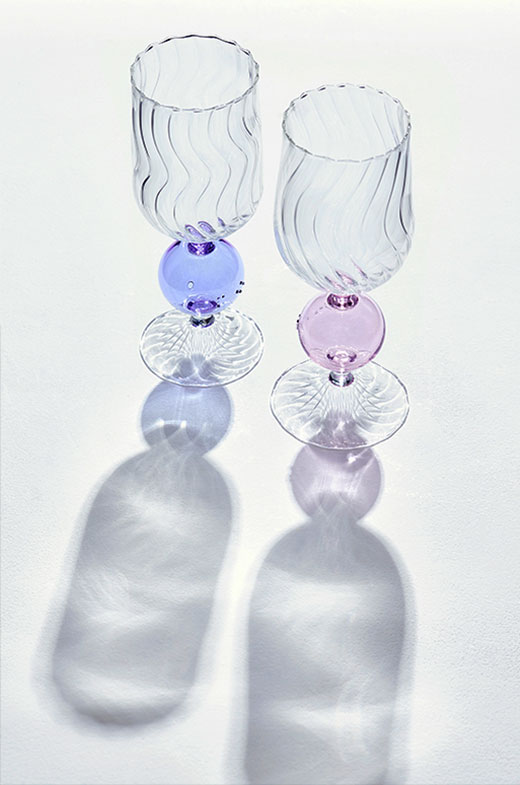 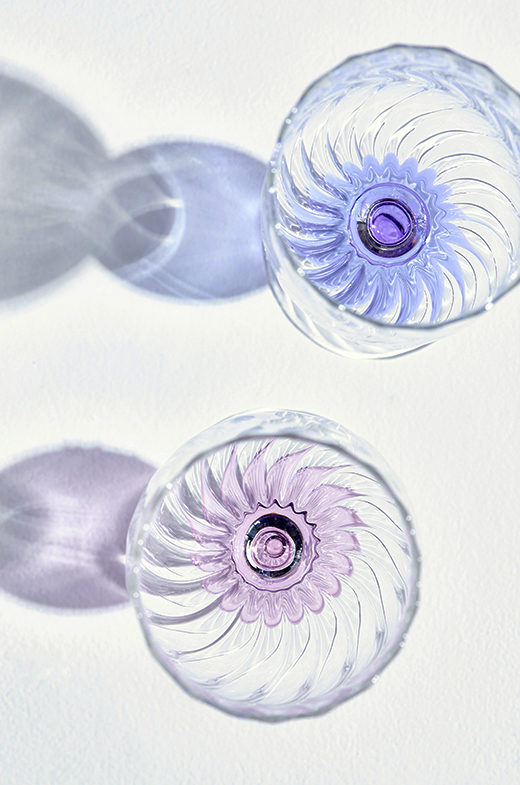 Jo Hyun-young’s Wine Goblet
Artist Jo Hyun-young creates works resembling fairy tales. Her collection is lovely. She would attach a unicorn or a white horse on the foot of a wine glass, or add raised letters that look like air bubbles on the glass to deliver a message. This goblet wine glass features the latter technique. Tiny balls on the curvy stem work as braille, and the subdued color of the glass is alluring. The wavy patterns decorating the bowl and the foot add liveliness to the dining table, like a spring flower that has just bloomed. 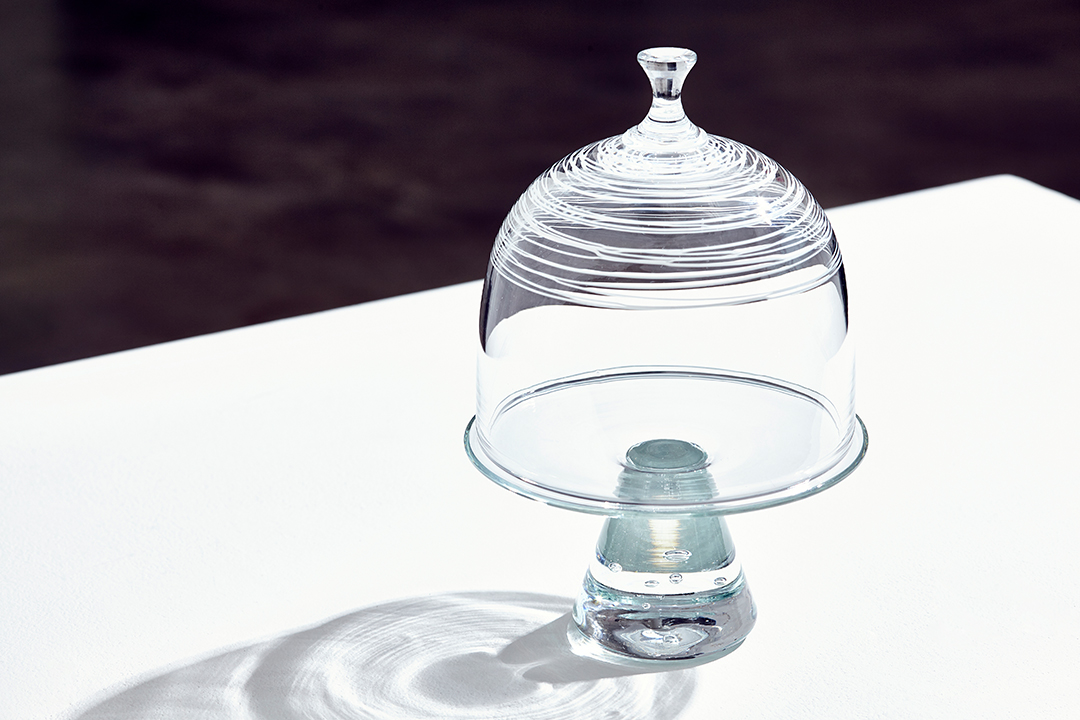 Jung Jung-hoon’s Cake Stand & Dome
A cake stand and a dome by artist Jung Jung-hoon emphasize fine, wavy lines that look like tree rings or water rings. Putting a white cake on the stand will help reveal its true value as the shadow of the glass design would be reflected on the cake. Jung Jung-hoon is known for using neat silhouettes and vivid colors including blue and green for his works. He uses the glass blowing technique, and is a member of Grigo Glass Studio in Icheon, Gyeonggi Province. 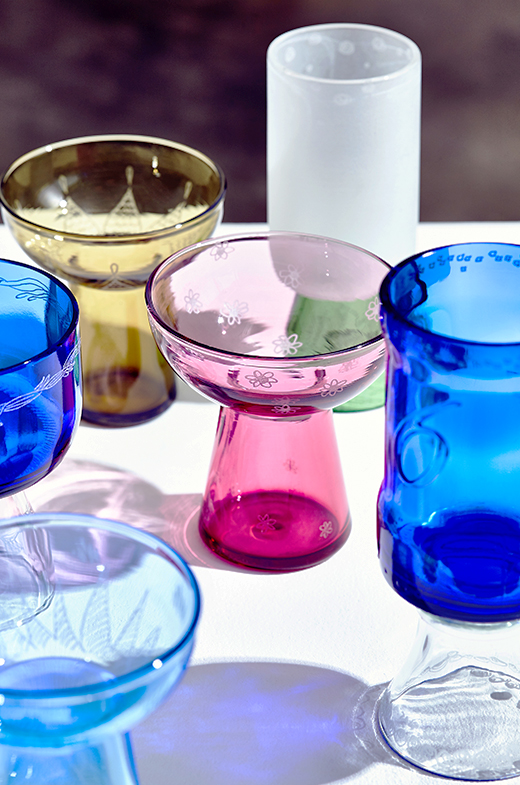 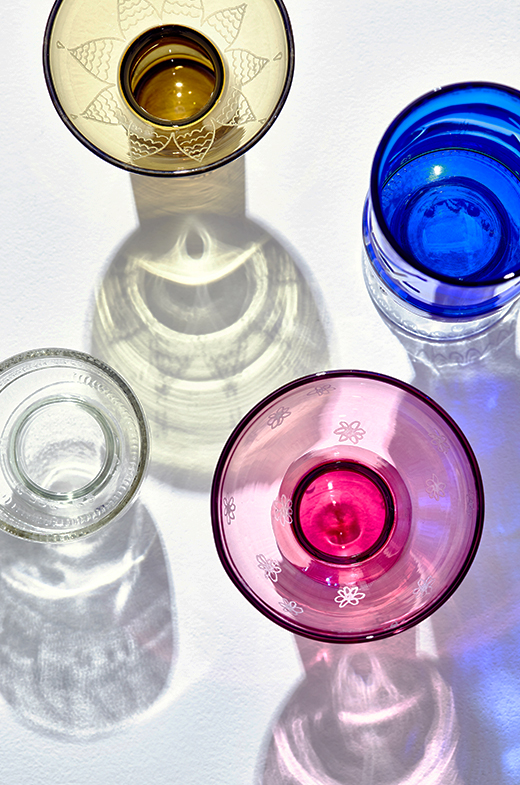 Park Seon-min’s Upcycled Glass
Artist Park Seon-min’s project began with collecting old glass bottles no longer used. She deconstructed and repurposed those bottles. The apple juice bottle became part of the glass, and the beer bottle was transformed into a vase. Glasses and bottles upcycled that way are welcomed back into our lives with a new form and a fresh purpose. 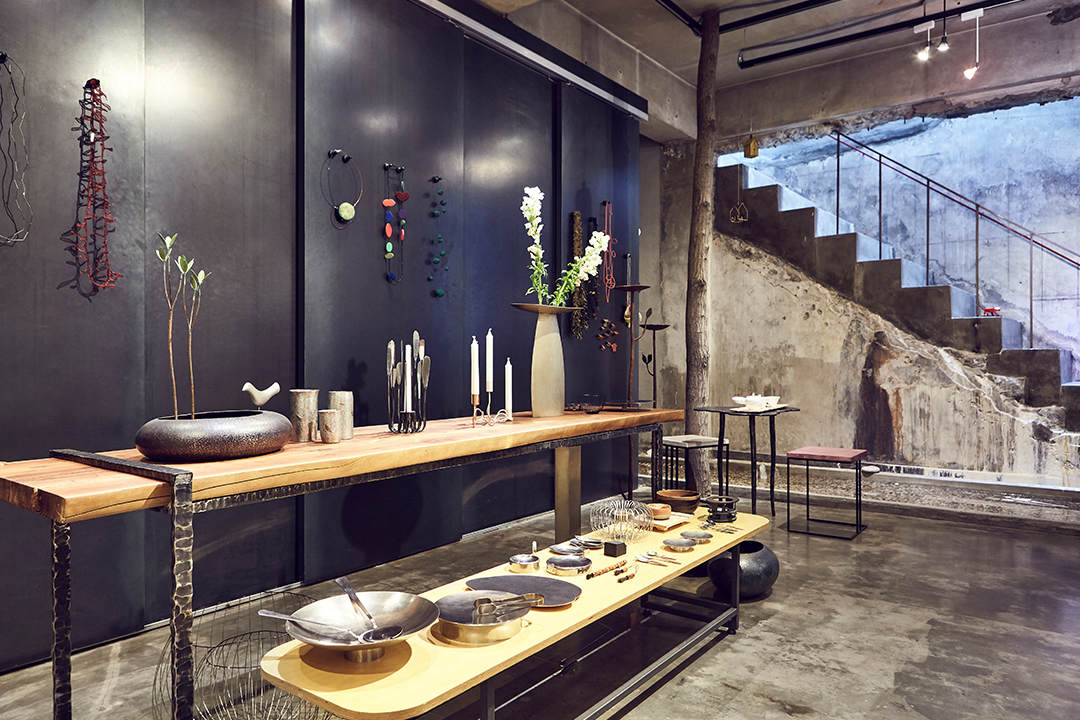 Meeting Venue for Busy Hands, Ahwon Gongbang
Ahwon Gongbang opened its doors in 1983 in Insa-dong, Seoul, as a specialty shop handling metal crafts. The studio began as a shop for metal artist Roh In-ah to showcase and sell her works. Her sister, CEO Roh In-jeong, took charge of the management and sales at the studio. Since then, Ahwon Gongbang has been run by six sisters including the artist and the CEO. Back then, due to the lack of places accepting metal crafts as a viable business option, words spread about Ahwon Gongbang and metal artists began flocking to the Insadong studio. More than 30 years have passed, and the studio is now bigger and has a wider variety of craft items and artists on its roster. In 2011, it opened a branch functioning also as a gallery in Samcheong-dong, Seoul.
If you take a closer look at craft items featured at Ahwon Gongbang, you will find an array of pieces that go well with sentimental works by Roh In-ah. On the other hand, the studio also offers items that are of the opposite characteristics. “As time goes by, I became thirsty for new materials and designs. ‘This is how young artists worked,’ I thought. As I began learning about and getting drawn to the materials and design styles that I had not used before, the type of items featured at the studio became much more diverse. There are no set rules or standards,” Roh explained. 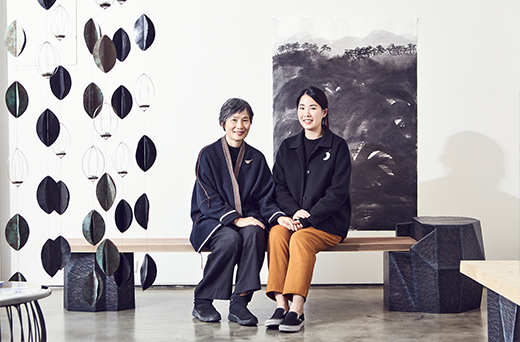 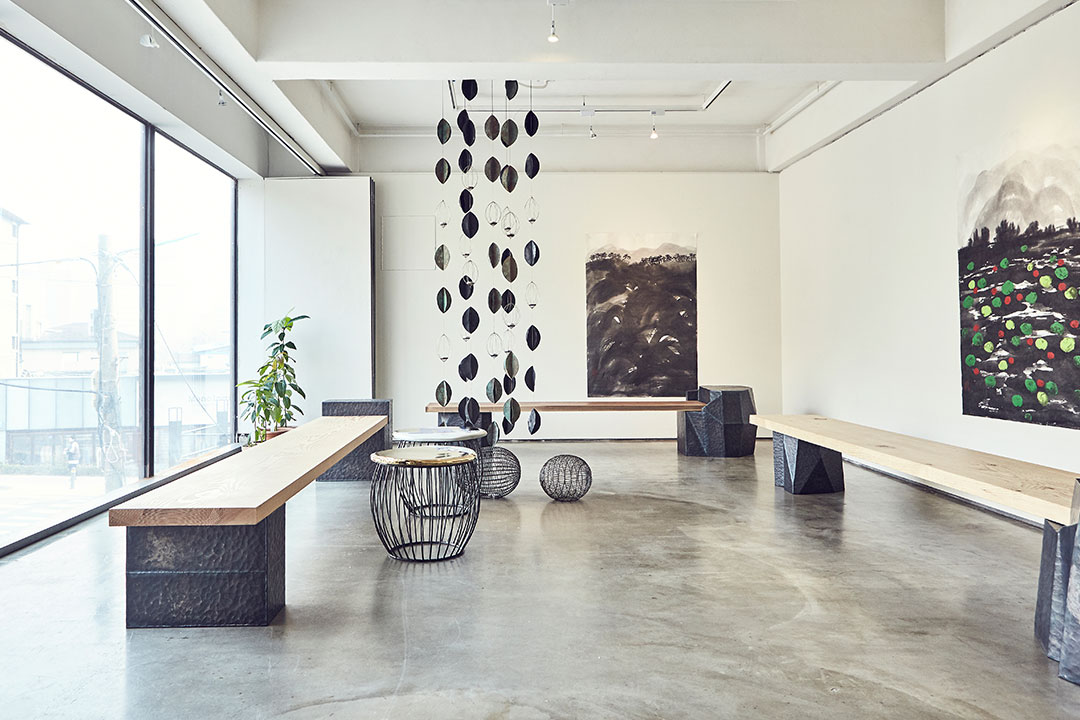 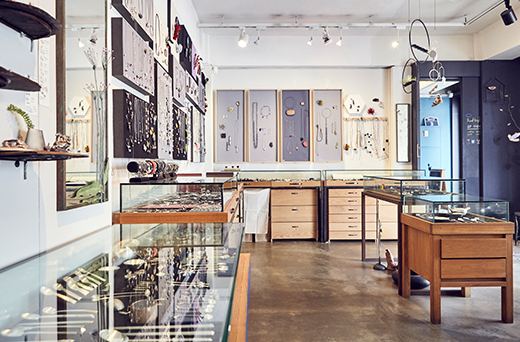 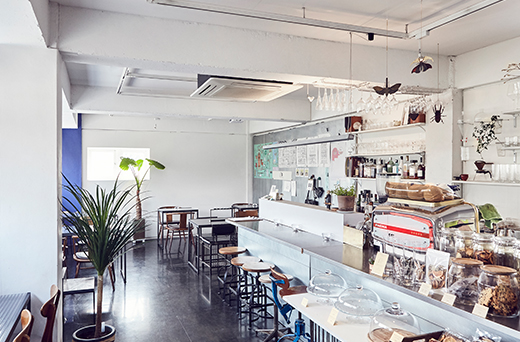