A history of Jeju’s haenyeo, a living cultural heritage with a remarkable story of overcoming adversity
If you’re looking for the people that most represent Jeju Island, look no further than its unique female divers, or haenyeo.
Our diving culture isn’t quite as unique as we thought!
As you may know, haenyeo — which literally translates to sea women — refers to female divers who dive into the sea without any equipment to harvest seafood like oysters. The process is called “sea harvesting.”
Historically, the practice wasn’t that common as Korea was an agricultural country, despite being surrounded on three sides by the sea. During the Joseon Dynasty, the government actively backed the farming industry and suppressed other industries.
Some notable figures did try to promote the fishing industry — Sin Suk-ju lobbied for the commercial growth of the industry and Chong Yak-chon published “Jasan Uhbo,” a marine biology book — but they failed to attract much attention.
The lack of modernization meant that the only way for people to catch fish and seafood was either through line fishing, casting a net or gathering seafood at low tide. Jeju’s haenyeo method is no different — not only have divers been using the same method since the Three Kingdoms Period, but they’ve never really put much effort into introducing it in other regions. Sea harvesting only really began to spread across the Korean Peninsula after the Joseon Dynasty ended. 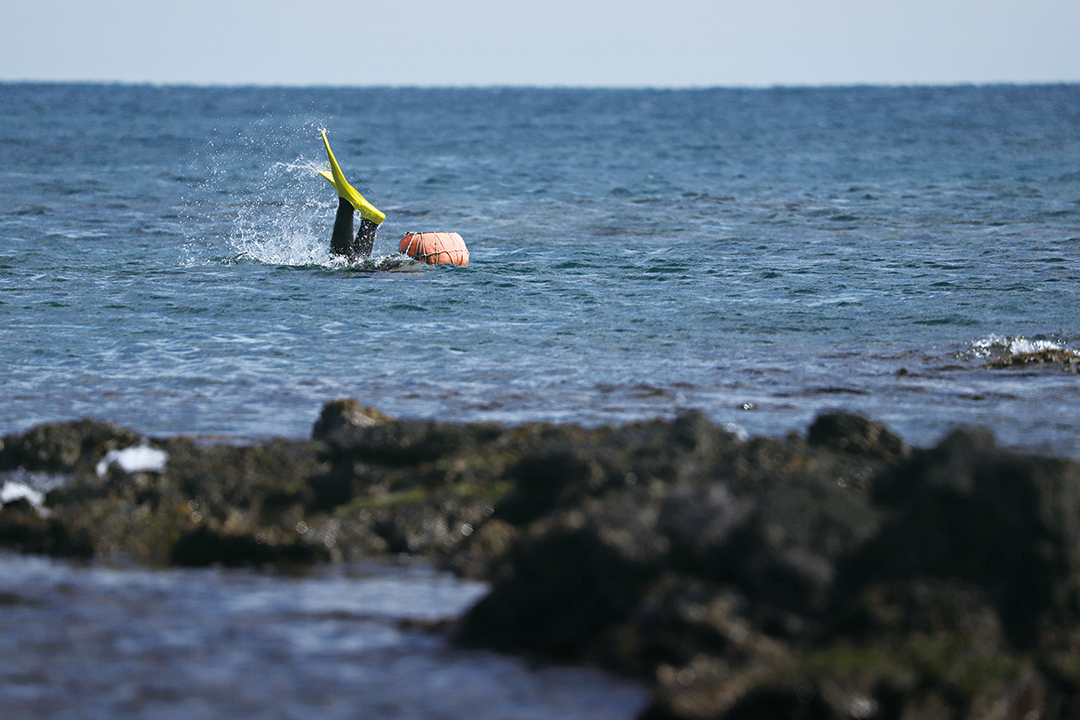 Across the Korean Peninsula, Jeju has its own unique seafood harvesting method. But look a little further afield and you might be surprised to discover that similar techniques exist in other parts of Asia. Japanese novelist Shiba Ryotaro attributes this Asian diving culture to the Kuroshio zone in his book “Tamna Account of Travels.” 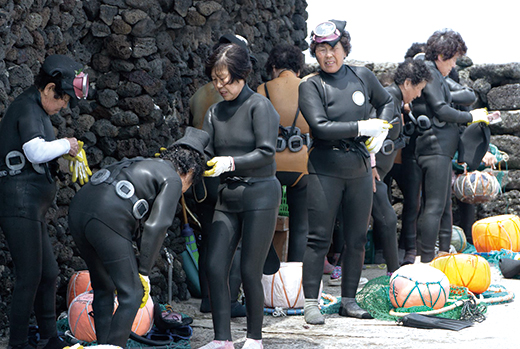 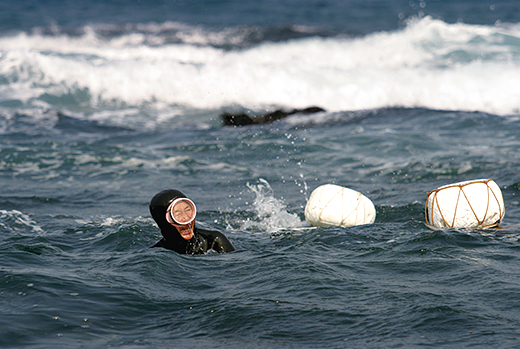 Jeju’s specific culture of sea harvesting may be unique to the Island, but across Asia similar methods exist. In Ryotaro’s book “Tamna Account of Travels,” the author attributes this trend to the Kuroshio zone, or the range of countries positioned within the Kuroshio Current.
The Kuroshio Current brings warm water heated at the equator up through the eastern Philippines, along the coast of China and up to the seas around Taiwan, Korea and Japan. As the current hit the southern corner of Japan, it divides into two, with the Korea Current continuing up to hit the bottom of the Korean Peninsula.
As the Kuroshio Current prevents the water from getting too cold, it allows divers to dive. As a result, Vietnam, Jeju, Okinawa, Kyushu, Seto Inland Sea and Thailand all have their own sea harvesting cultures. We have even seen haenyeo-trained celebrity divers compete with Okinawa’s Ama, or male divers, before. 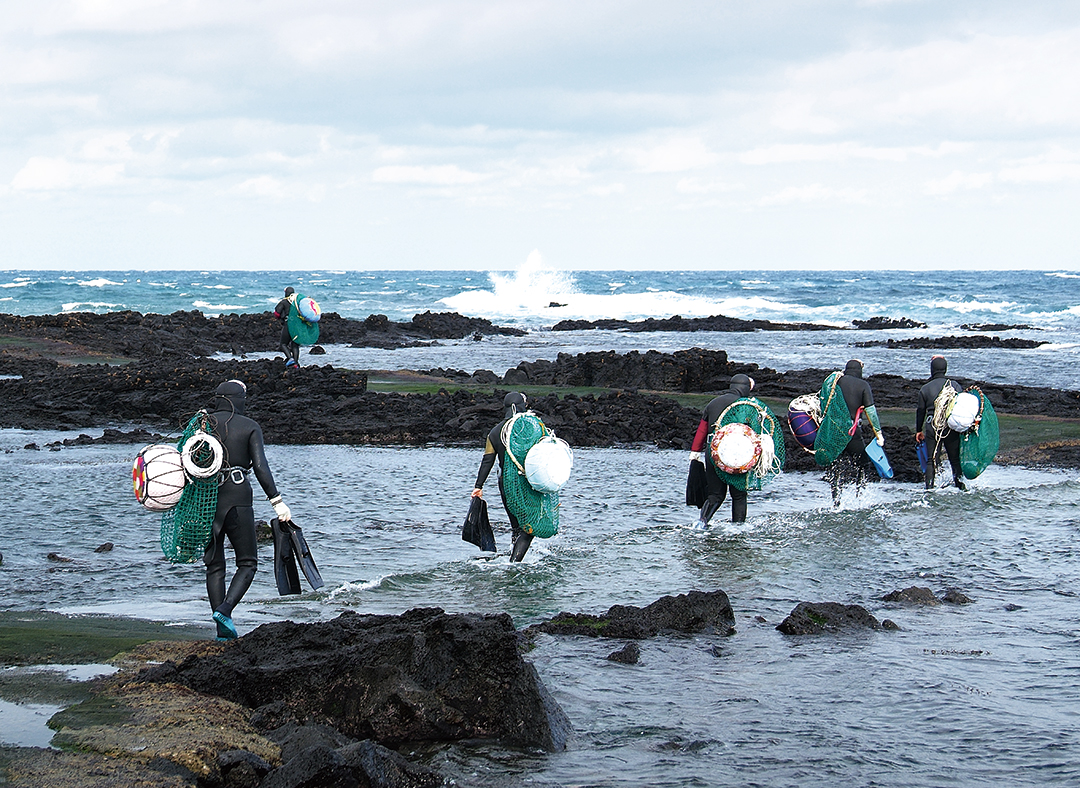 Haenyeo off to sea © haenyeo museum

Why female divers?
Even in the Kuroshio zone, haenyeo culture is not normal. Korea and Japan are the only two countries to have a female diving culture. But in Japan, there are also quite a number of male divers. Due to this, Korea is the only country where female divers are entirely responsible for sea harvesting.
But that wasn’t always the case.
In “Samguk Sagi,” a historical record of the Three Kingdoms of Korea, there’s a record that “Jeju presented pearls to the king during the Goguryeo term.” Since sea harvesting was the only way to find pearls at the time, it can be estimated that sea harvesting in Korea started during the Three Kingdoms Period or earlier. But it is unclear whether the divers at that time were male or female.
During the 21st year of Taejo of Goryeo’s reign (AD938), he absorbed Jeju into Goryeo, ending the island’s Tamna Dynasty. King Sukjong of Goryeo strengthened his grip on Jeju by reforming it into Tamna district. After Yun Eung-gyun, who was sent to Jeju at the time, saw both male and female divers working naked, he banned all naked diving on the island. This edict also proves that at that time, there were both male and female divers on the island.
Things don’t seem to have changed much in the Joseon Dynasty. Male divers at the time were called pojak, and rowers, or gyukkun, also went sea harvesting. Female divers were generally married to either a pojak or a gyukkun. Pojak and gyukkun mainly harvested abalone and sea cucumber deeper in the sea while haenyeo mainly harvested agar and seaweed. There were female divers that harvested abalone, but according to Jeju pastor Lee Ik-tae’s “Ji-yong Rok” written in 1694, there were about 800 female divers harvesting seaweed but only 90 haenyeo harvested abalone.
However, as government quotas increased on abalone, pojak and gyukkun started running away to the mainland to avoid the difficult task. In 1629, a law was introduced banning people from Jeju from moving to the mainland, staying in place until 1923. Still, the number of male divers continued to decrease and in a desperate bid to meet the quota, more and more women began to dive for abalone and other deep-sea seafood.
An old Jeju saying that roughly translates to “making money in hell to support children in the world” shows how dangerous the haenyeo’s work is. Another saying, “born as a woman because they couldn’t be born as a cow” makes it clear how difficult life was for the women on Jeju Island. 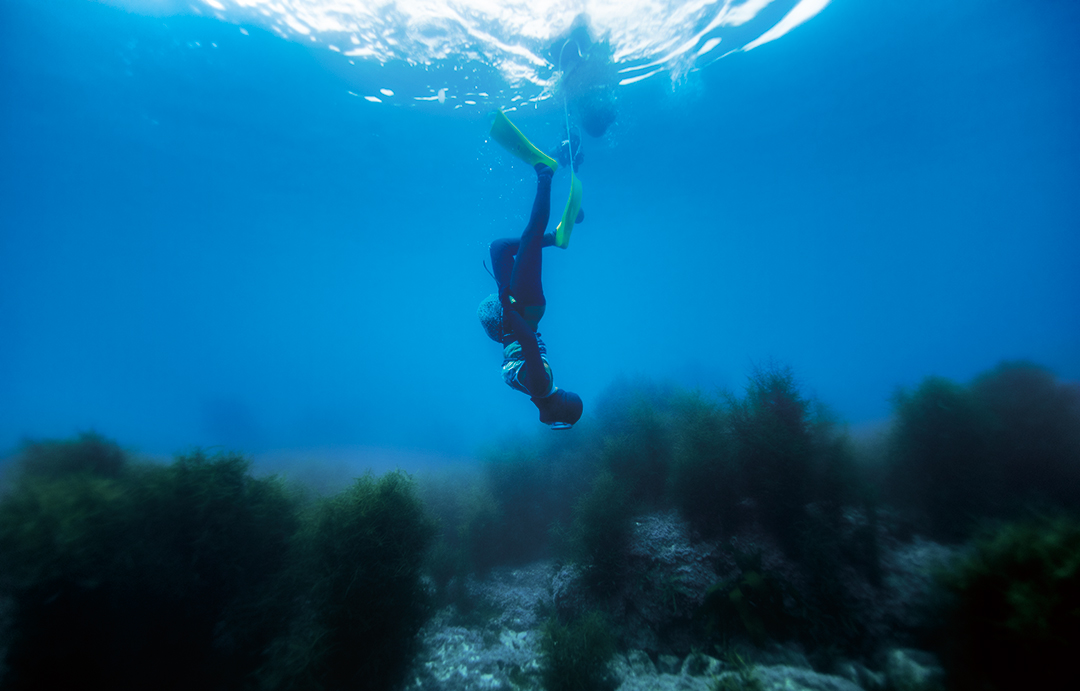 The sound of their breath
When divers dive for about seven hours a day or dive to as deep as 10 to 15 meters, they sometimes get decompression sickness, which in the worst cases can lead to death.
An old Jeju saying that roughly translates to “making money in hell to support children in the world” shows how dangerous the haenyeo’s work is. Another saying, “born as a woman because they couldn’t be born as a cow” makes it clear how difficult life was for the women on Jeju Island. Since their job is so dangerous, haenyeo started working together in groups, rather than on their own.
Depending on their ability, haenyeo are divided into three groups. The highest ranked haenyeo harvest in the deep sea while younger and less experienced divers work in shallower areas. Traditionally, an older, higher-ranking haenyeo gives a handful of seaweed, known as a gaeseok, to a younger diver. This exchange is an old way of saying “let’s help each other and get through this alive.”
Haenyeo typically dive for one to two minutes at a time. When they float back up to the surface, they make a unique sound similar to a whistle. This breathing technique is a way of releasing carbon dioxide from the boxy and taking in oxygen. When this noise is produced by 30 to 40 haenyeo at the same time, it creates a powerful, otherworldly sound. 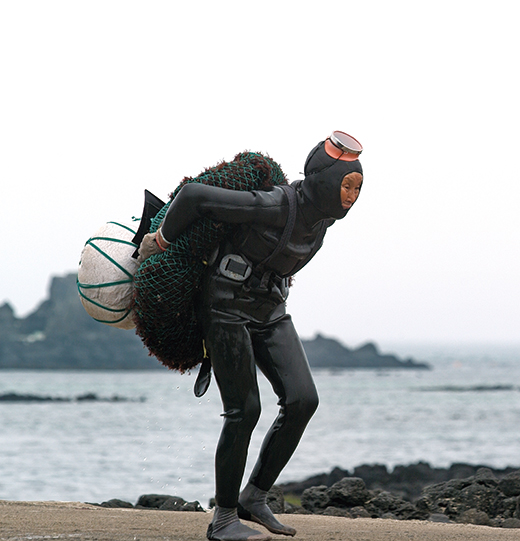 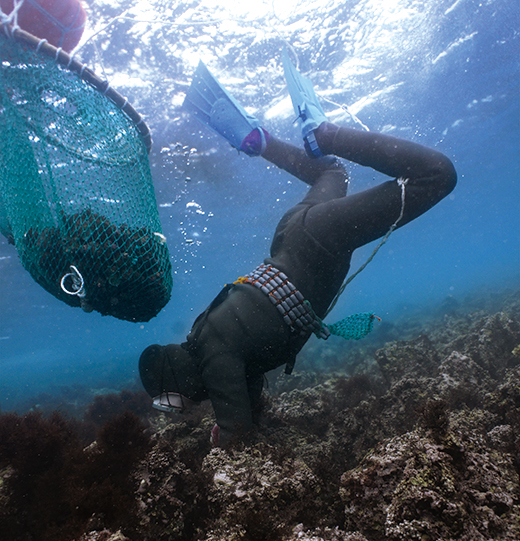 Haenyeo all have their own diving suit and equipment. Traditionally, it was made up of a top and bottom section, but since the 1970s they have been diving in rubber suits. A traditional haenyeo working song describes the divers as carrying their spirit box on their back and a gourd on their chest.
The guard they carry on their chest is better known by the name taewak. It’s a buoyancy device that helps the haenyeo to move to where they want to harvest seafood and also allows them to rest without having to worry about staying afloat. The taewak is round in shape, but flat on the front and back to make it easier to carry. For this reason, it is artificially shaped.
Haenyeo also carry stones and pieces of lead on their waist to fight the buoyancy. Aside from their spirit box and gourd, haenyu also carry bitchang to scrub off the abalone and a rake to dig on the oceanfloor. In 1931, thousands of Jeju haenyeo fought against the Japanese with their bitchang at Sehwa, Gujwa and in Seongsan. Due to this incident, more than 100 people were jailed.
In 1998, the Jeju haenyeo anti-Japanese movement monument was built in Gujwa and in 2006, a memorial park for the Jeju haenyeo anti-Japanese movement around the monument was created.
A whistle-like sound is made to quickly let out carbon dioxide in the body and draw in oxygen. When this noise is produced by 30 to 40 haenyeo at the same time, it creates a powerful, otherworldly sound. 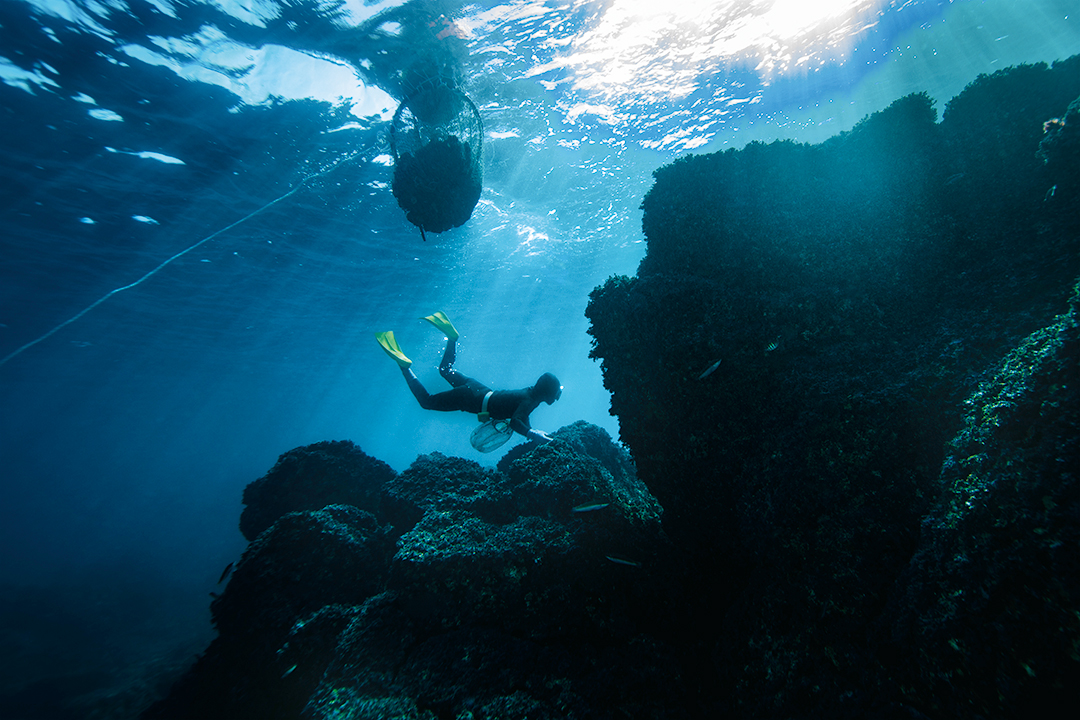 Haenyeo deep in the water © Shutterstock

From Jeju, to the Korean Peninsula, to a global cultural heritage
Today you can see haenyeo divers not only in Jeju, but in Busan and other parts of the country as well.
The Korean haenyeo culture was spread by Jeju immigrants in 1923, after the restriction on their movement was lifted. Migration across Korea started in the early 20th Century and was in full swing by the end of the 20th Century. Starting from 1910, groups of Koreans started moving around, rather than just individuals.
During the 1910s, Japanese traders gathered groups of haenyeo and took them to Busan in December every year, according to the lunar calendar. From Busan, Jeju’s haenyeo moved to various fishing villages across the Korean Peninsula. Sometimes, groups of Koreans from Jeju would pool their money to buy a fishing boat and move to the mainland on their own, but this was less common. The ratio of forced versus voluntary migration is estimated at about 6 to 4. 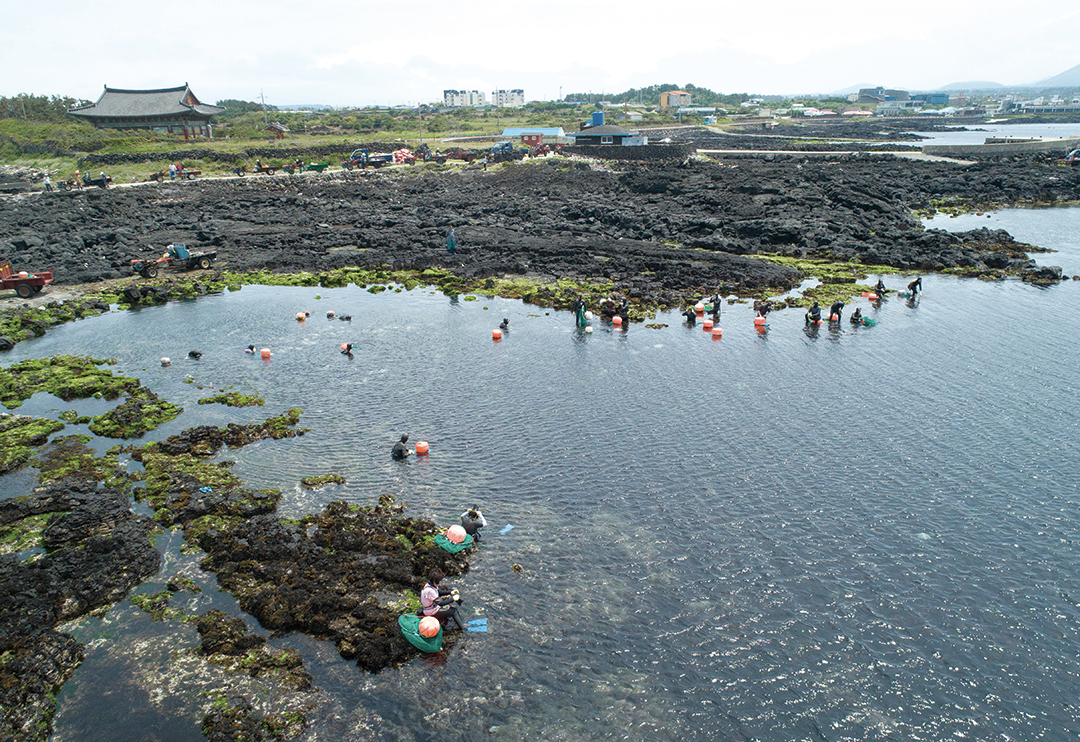 Haenyeo at shore to work on akane, the original source for agar-agar. © haenyeo museum 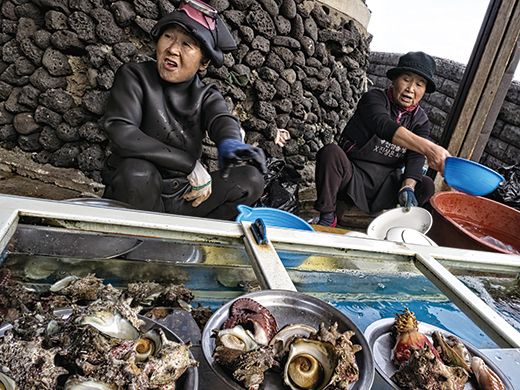 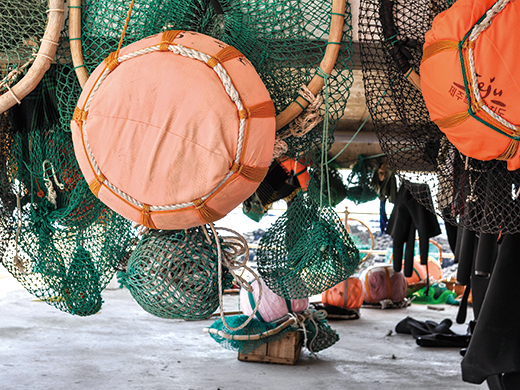 Haenyeo selling her harvest from muljil. Tools for muljil are there, too. © Shutterstock

Across Korea you can see two kinds of sea harvesting. Some haenyeo head out to sea by boat in order to reach deeper water, while some head straight into the water from land. The different techniques really depend on location — in southern and western Korea, divers tend to head out in boats because there are so many islands, while to the east and on Jeju divers tend to head straight into the shallower waters and make their own way out. Both of these techniques originate from Jeju.
The difficult lives of the haenyeo and the turbulent times they went through have now created a cultural tradition in Korea. The haenyeo’s song is Jeju’s first intangible cultural asset, their suit and equipment is the island’s 10th cultural asset ad the haenyeo fishing industry is Korea’s first national fishing heritage. Haenyeo are Korea’s 132nd intangible cultural asset and the haenyeo culture has been inscribed on the UNESCO cultural heritage list. 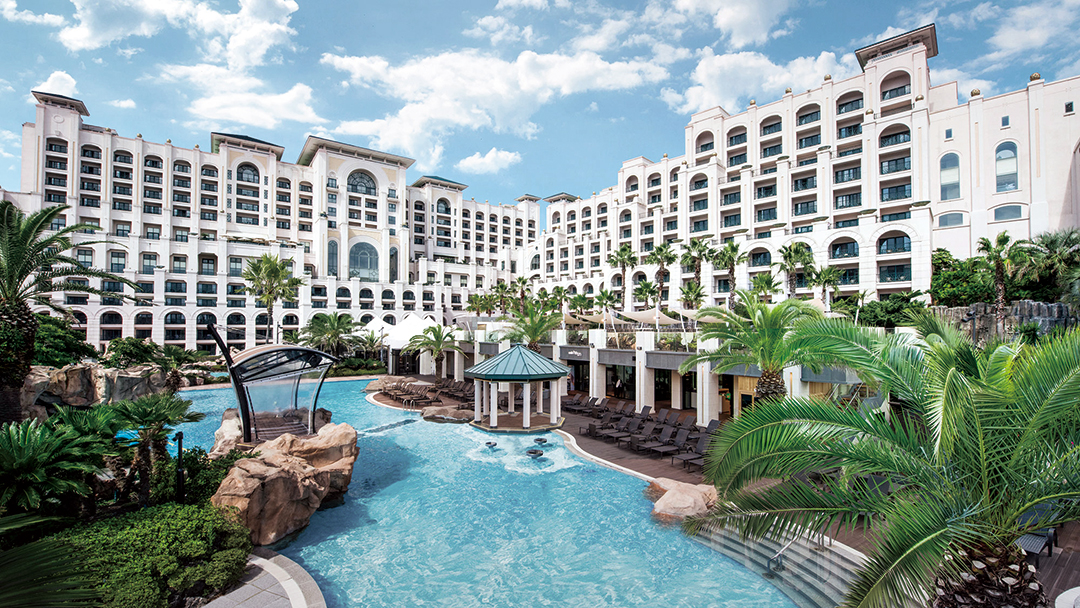 Place to stay on Jeju: LOTTE HOTEL JEJU
Located in Jungmun, Jeju, LOTTE HOTEL JEJU is a resort with 500 rooms. Using South Africa’s “Palace of the Lost Sea” as its model, LOTTE HOTEL JEJU offers an exotic mood, well blended with Jeju’s gift of nature. Some of its popular areas include the eight restaurants and the lounge, heated pool that is open in all season, and many other facilities.