City from Architectural Photographer's Perspective
Standing from the same distance as others, architectural photographer Choi Yong-joon sees different things. Viewing ordinary things from a fresh perspective is a good starting point for any trips.
Most of us live our lives not paying much attention to our surroundings. It's nearly impossible to study every little detail living in a bustling and chaotic city. But there are some people who manage to discover the beauty hidden amidst all that. Choi Yong-joon, an architectural photographer, puts the city in a new frame with his camera. His first photo book published in May 2019, “Location," features images taken from Seoul, Busan, Incheon, Tokyo, Osaka, Hong Kong and Milan between 2015 and 2018. He also used tools such as Google Earth and 3D maps to locate beautiful spots of these cities and took photos.
The cities Choi captured are at once familiar and unfamiliar, representing a peaceful world built on horizontal and vertical lines in pastel colors. He distills complicated cities through his own frames, allowing the viewers to identify attractive moments. While his photos may not serve as maps to help you locate places, they will definitely serve as the holes through which we view our surroundings differently — much like what Japanese poet Shuntaro Tanikawa once said about poems being able to transcend differences between numerous languages spoken on Earth and to make a wind hole on our consciousness. We allowed Choi to let us see our city and buildings from new perspectives. 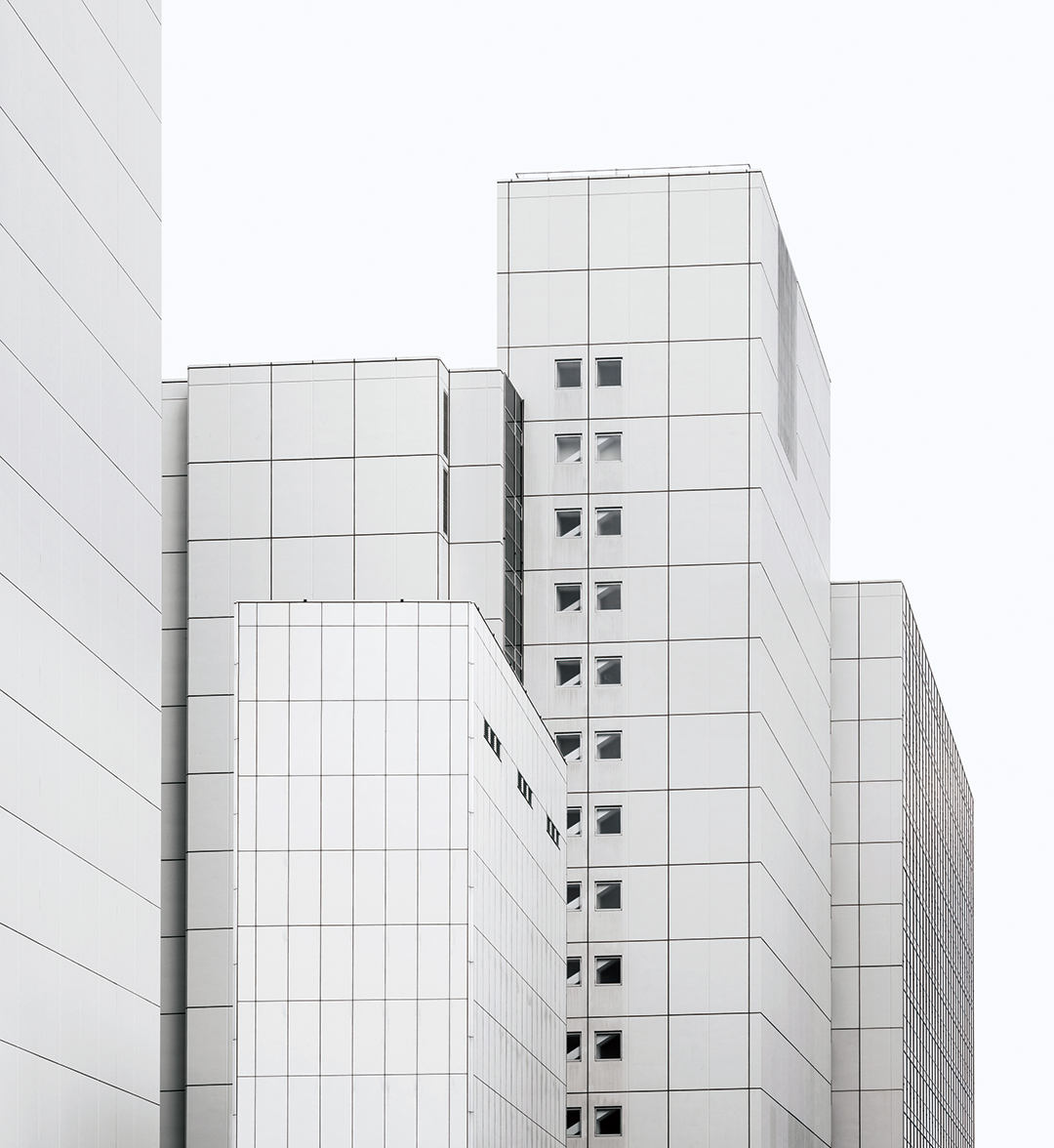 “I wanted to present cities viewed from a perspective expanded by the tool (map).”
Choi Yong-joon, architectural photographer
Q. I understand you majored in French literature at university. How did you end up becoming a photographer?
A. I took more interest in photography and architecture lectures than classes for my major. I mostly read photo books, architectural books and oversize import books at libraries, and I realized there was a whole new world out there. I wanted to be an architect and also wanted to be a photographer. But I couldn't do both. I chose photography because it took me relatively less time to educate myself.

Q. You've long been taking pictures of buildings. What is it about buildings that draw you to them?
A. When I first decided I wanted to become a photographer, I enjoyed seeing works of artists who mostly shot buildings. I was influenced by early works of Thomas Ruff, particularly interiors and exteriors of German residential buildings, by Candida Hofer, and by buildings and cities taken by Stephen Shore and Ed Ruscha. 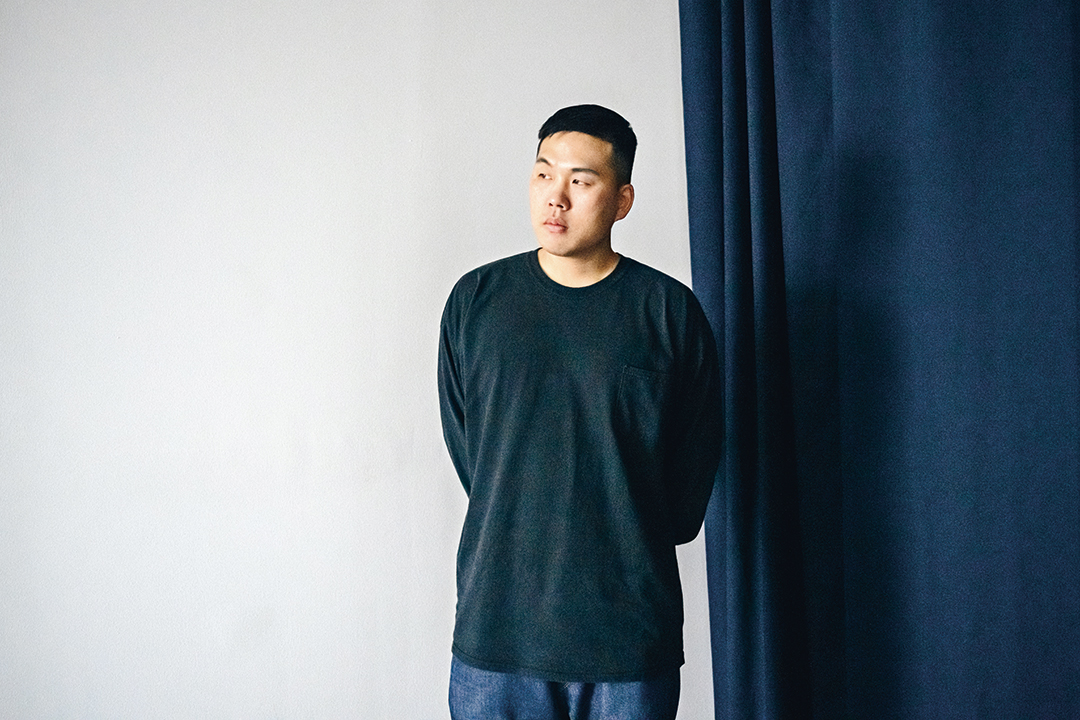 Q. Do you have any particular approach or style you prefer when taking pictures of buildings?
A. Rather than focus on aesthetics of particular buildings, I pay more attention to the building's relationship with other structures around it or its context within the city. From places where the building makes connections with surrounding structures or some random areas that don't necessarily reflect the intent of the architect, I try to identify spots that I can capture with my camera. Rather than a complete form of building, I, as a photographer, find it more interesting to discover unexpected sides when I look at particular points of cities or buildings' interiors and exteriors.

Q. What types of buildings grab your attention?
A. Obviously, I like well-designed, sleek buildings. But as a photographer, I am drawn to buildings that seem hastily constructed but that still entertain and inspire me in some unexpected ways. 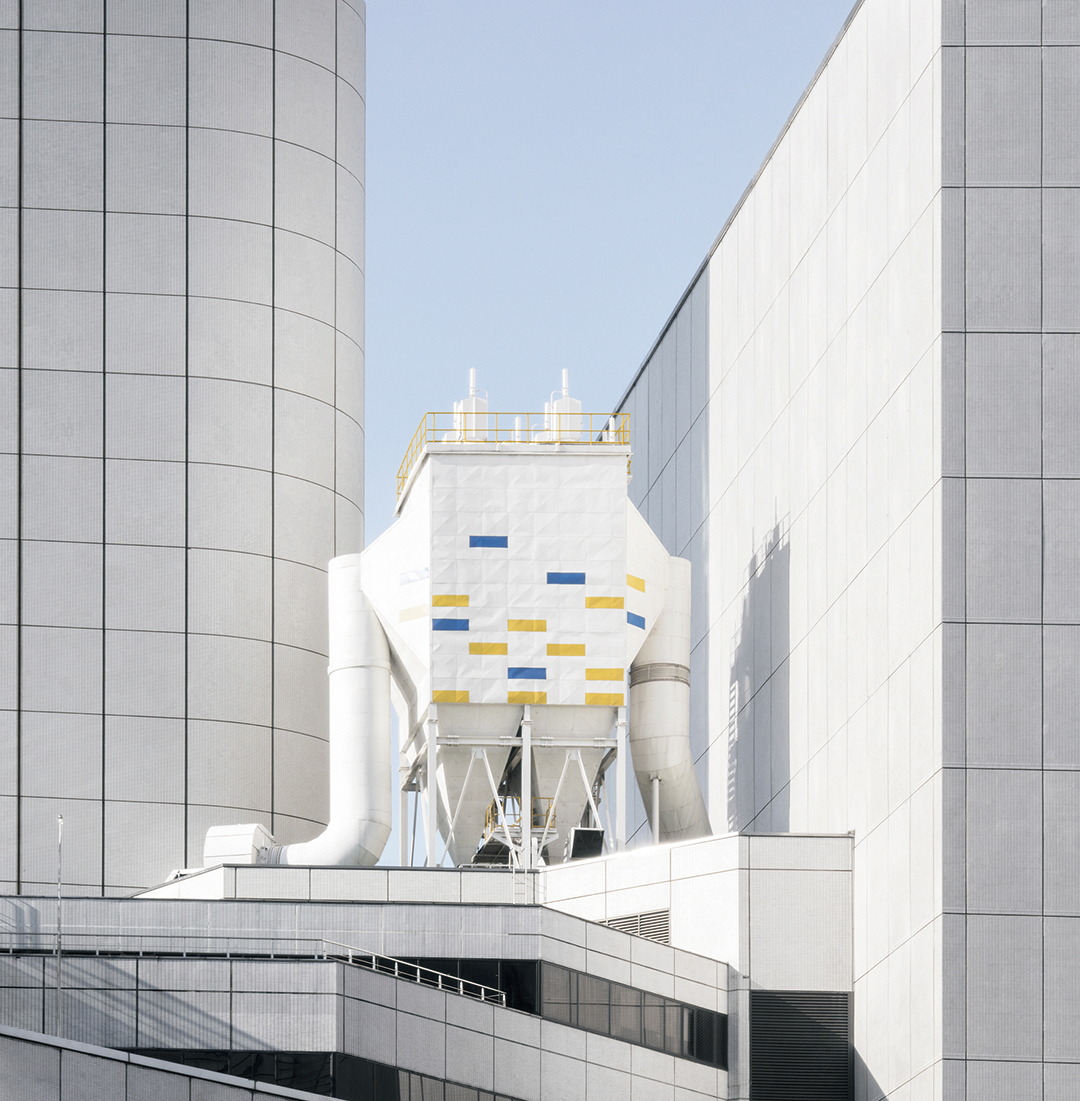 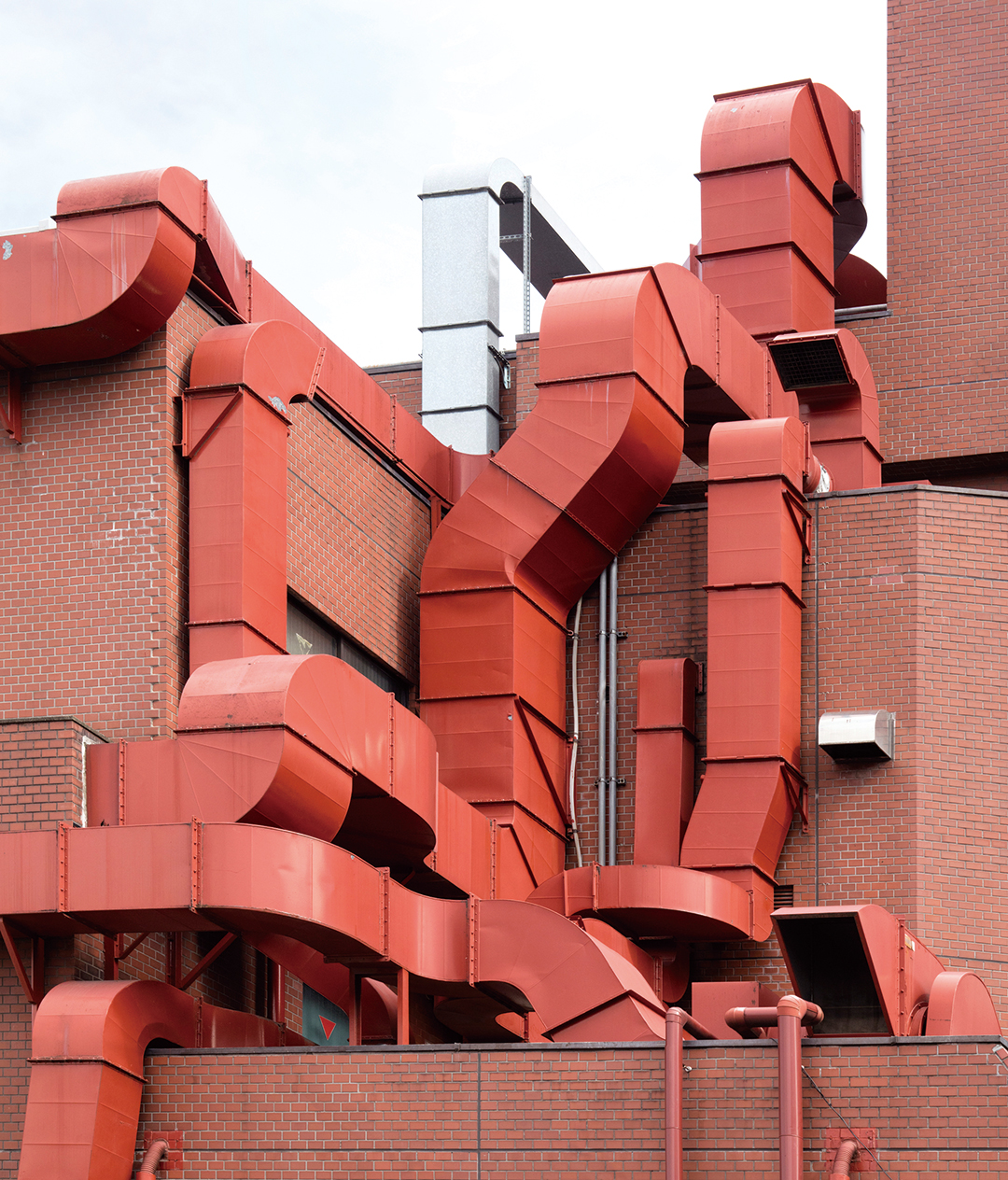 “As a photographer, I am drawn to buildings that seem hastily constructed but that still entertain and inspire me in some unexpected ways.”
Choi Yong-joon, architectural photographer 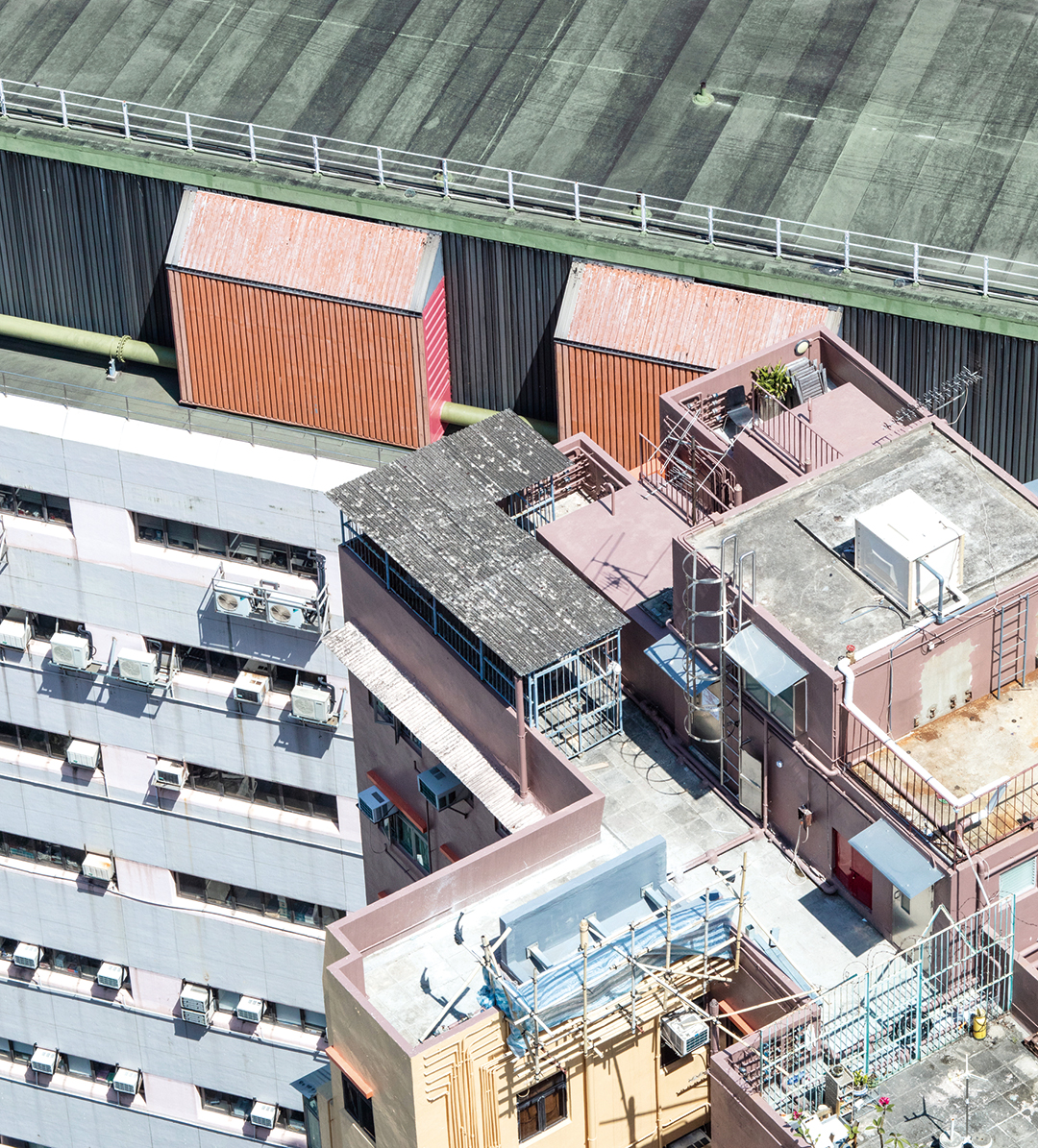 Q. How did your 'Location' series come about?
A. I've enjoyed studying maps since I was a child. It's just fun. I've also kept track of how online map services have evolved since their inception. Around 2015, Google came up with the 3D map. I used to check it out for fun but I began using it for work as well.

Q. It seems like an original way of researching your locations. Can you tell us more specifically how you go about your research and how it prepares you for the shooting?
A. Google's Street View isn't any different than checking out a place on foot. The satellite view is just a flat floor plan seen from above. But if you use the 3D map, you can check out places from all sorts of angles, like you're flying over them, regardless of altitude or locations. So I would save screenshots of places that I liked and determine whether it was possible for me to take pictures or not before taking action. 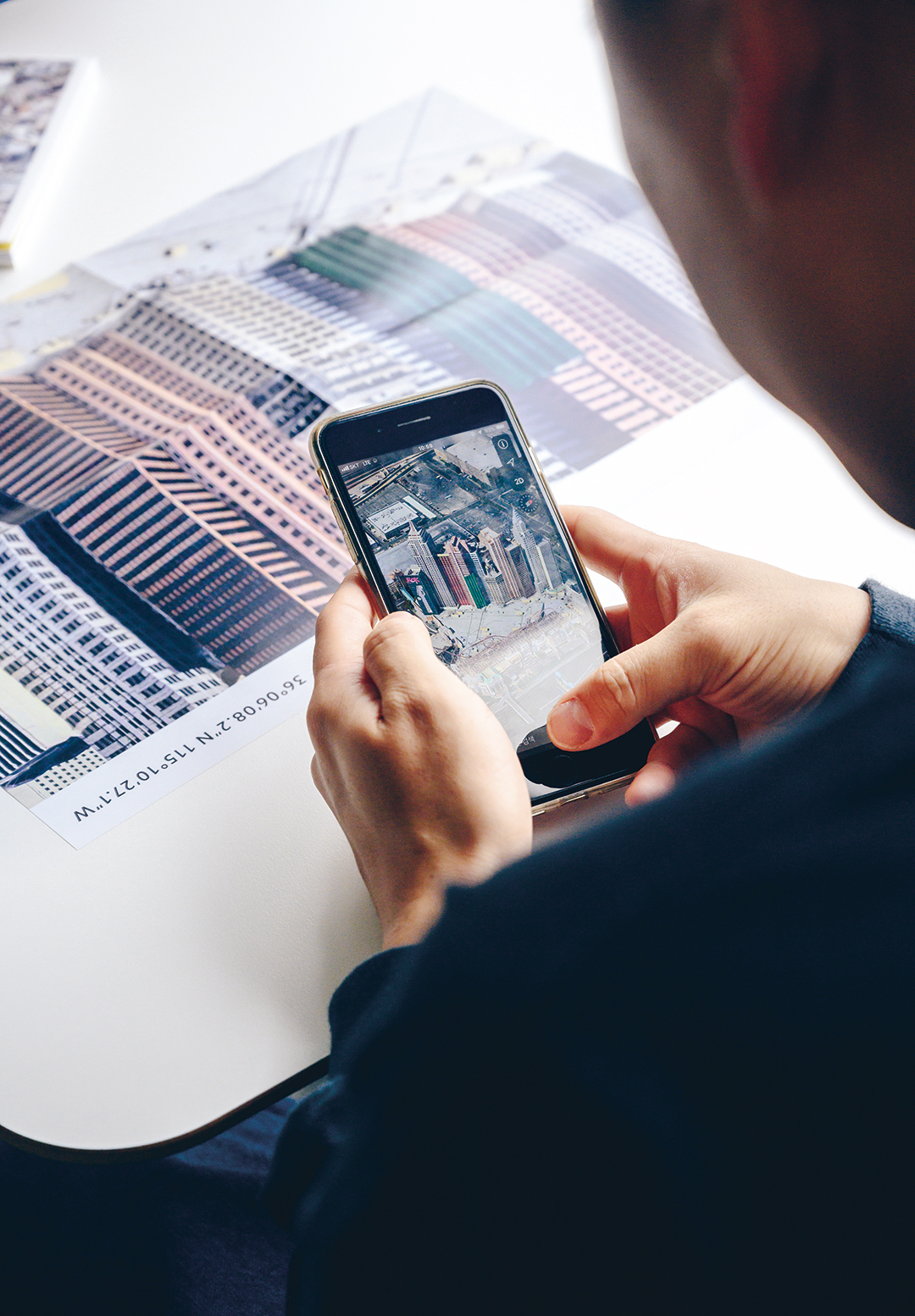 Q. How do you decide if you can actually shoot a place or not?
A. For instance, from this picture, you can pick out a baseball field, a tennis court and a fire station. I thought I could take photos of this area 100 percent. There is an observatory at the top of a nearby building. I figured I could get something from there, and I tried to see what would be the best angle for me. If I stand on the northern side and try to see the south side, then, the backlight would make things a bit difficult. I studied the 3D map and decided on my angle. 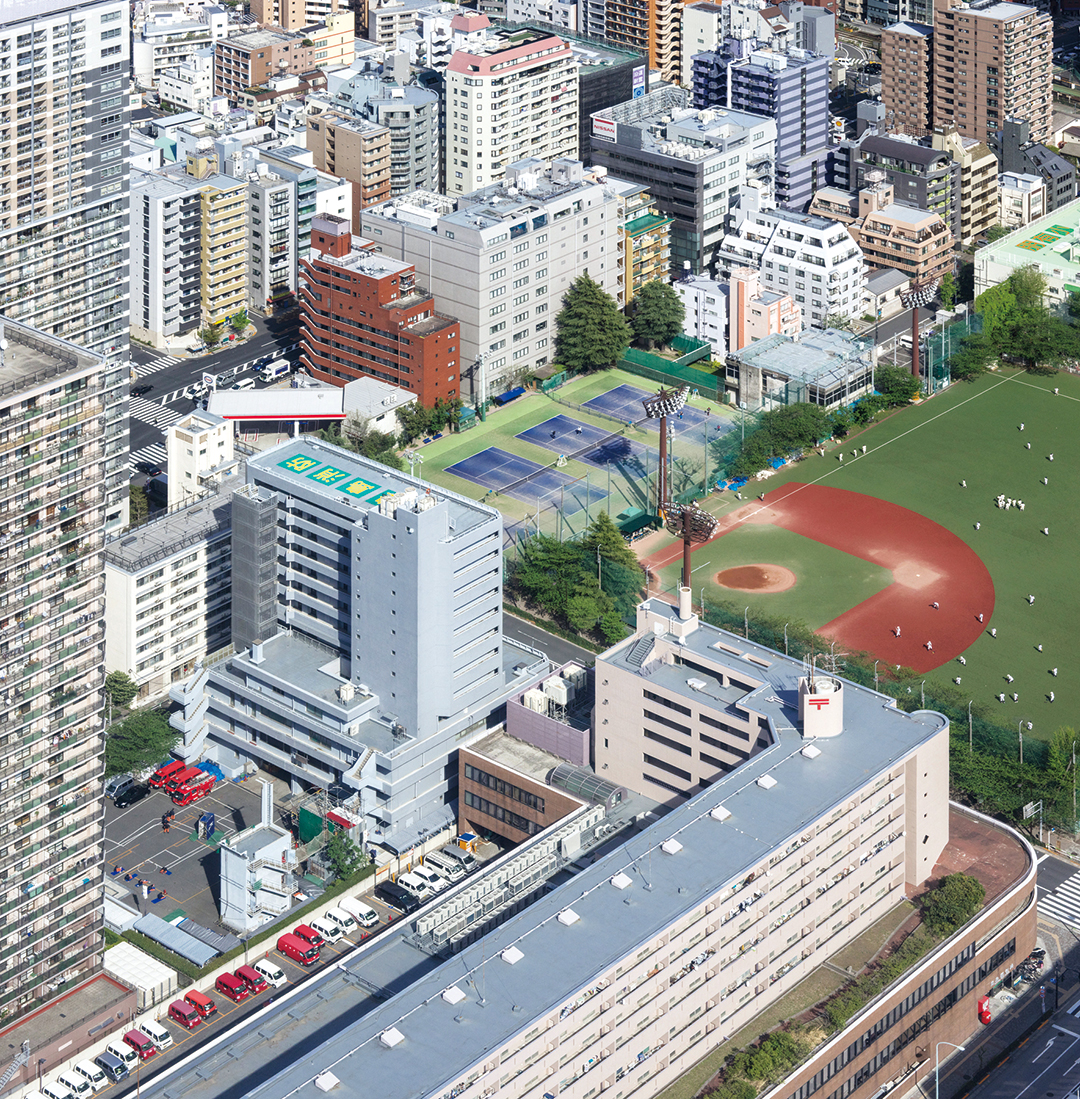 Q. That's quite painstaking. But shooting itself probably didn't take that much time.
A. I have to figure out the amount of light I am going to get at which hour of the day before I visit my locations. Because I plan almost everything beforehand, it doesn't take that much time to shoot. But there were days when I thought the sky was going to be clear and then it was all cloudy from the top of the building. When I didn't quite get the results I wanted, I have revisited some sites.

Q. I am sure you've encountered some unexpected things on your locations. Do you have any incidents that stick out?
A. I got caught by security guards so many times. Fortunately, they've never called police, and I managed to get out of trouble unscathed. When I have to take photos without permission, I make sure to dress as neatly as I can.

Q. “Location” is your first photo book. What kind of book did you want to make?
A. Generally, books with pictures of cities or buildings tend to be oversized, heavy and almost formal. I suppose there are reasons for that. The bigger the photos, the better it is for readers to see them. If I had published a book on my won, I would have produced something more basic in a hardcover. But the publisher 'April Snow' first came up with a proposal, I wanted to do something different. The publisher wanted a book where photos blended in with the overall design and texts of the book, and I also wanted someone to guide me into a direction that I didn't expect myself to go. So we ended up with a book small enough that you can carry it around, and in terms of its design, it's one of a kind. If you think of it as purely a photo book, you may find this even a bit strange. We selected about 150 photos first and then picked out the ones that we thought fit into the overall flow of the book. 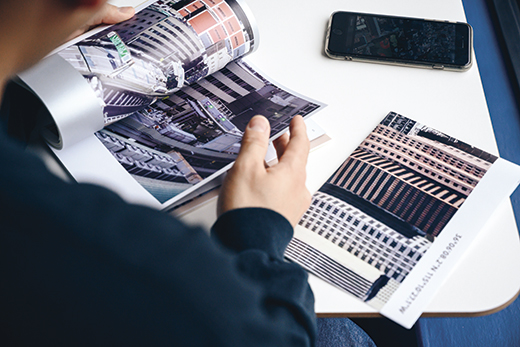 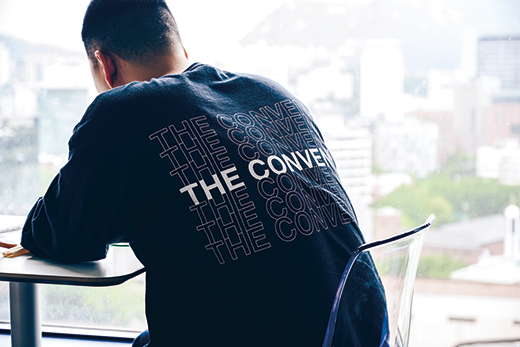 Q. There are precise grids and bright colors. What did you want to demonstrate with your 'Location' series?
A. Cities viewed from a perspective expanded by the tool (map).

Q. Without store signs, it can be hard to tell Seoul from Tokyo. Do you want your viewers to be able to identify places by looking at your photos?
A. It doesn't matter. If they are, then it's great because we can have the common ground. If they don't have any clue, it's still fun in its own way.

Q. While working on the 'Location' series, what did you learn about Seoul that you didn't know before?
A. I hate to admit it, but other than downtown areas, other parts of the city all look the same. It's almost like one place has been copied and pasted on to another. The city's packed with apartment buildings, stores and commercial districts near subway stations.

Q. What's the image of Seoul that you have on your mind?
A. I think Seoul is a city in which many different shapes of buildings have been randomly arranged, without any direction about overall urban development. I don't know if it's a strength for Seoul, but it sure is an interesting aspect of the city. There's an irony to buildings that have been erected without context or order. There is something absurd to them to the point of being interesting. For instance, a warehouse-style factory in Gasan Digital Complex has an extension to the front that has an entirely different, classic finish. I don't think you can find anything quite like it outside Seoul. 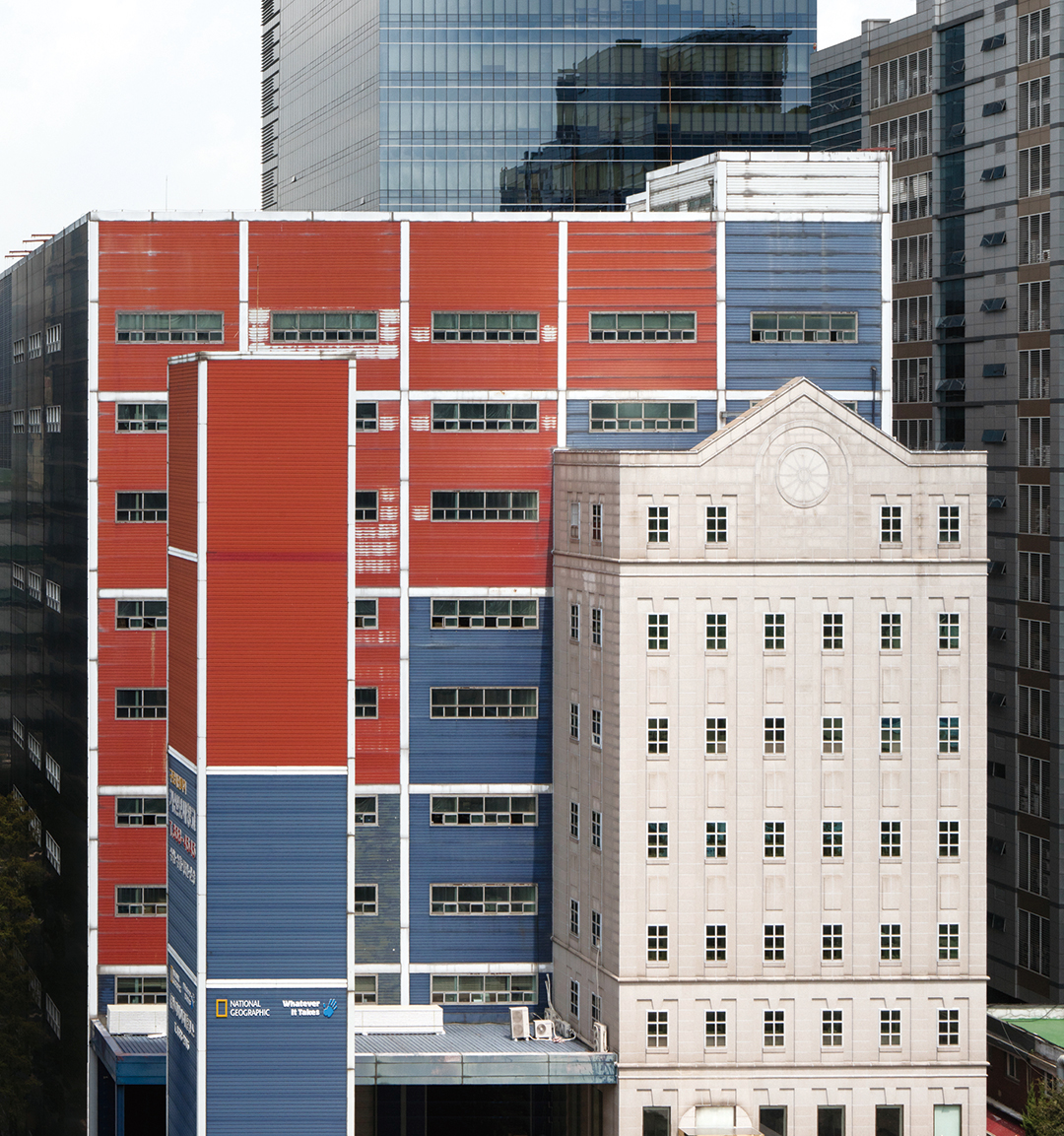 Q. What's your favorite building in Seoul?
A. 'Samil Building' by architect Kim Chung-up. I like the way it looks now, but I prefer pictures of the building from the 1970s when it was first erected.

Q. Is it included in “Location”?
A. I have taken pictures of it but they didn't make the book. I left off most of the photos of famous buildings.

Q. “Location” must covers East Asian cities, other than Milan. What are some of the cities or buildings that you'd like to shoot in the future?
A. I didn't mean to stick to East Asia at first. If I had to find a reason, I guess the traveling is easier. But also, East Asia offers just that much more objects. Most buildings in Seoul and Tokyo are done in contemporary style. For European cities like Paris and Barcelona, urban planning was done in the 1800s, and buildings constructed under those plans have given their cities an identity. And there's little room left for interpretation for photographers. No matter how you shoot Paris, it's still Paris. But most East Asian cities were hastily developed and have contemporary buildings that were randomly erected. So you can always find interesting points. 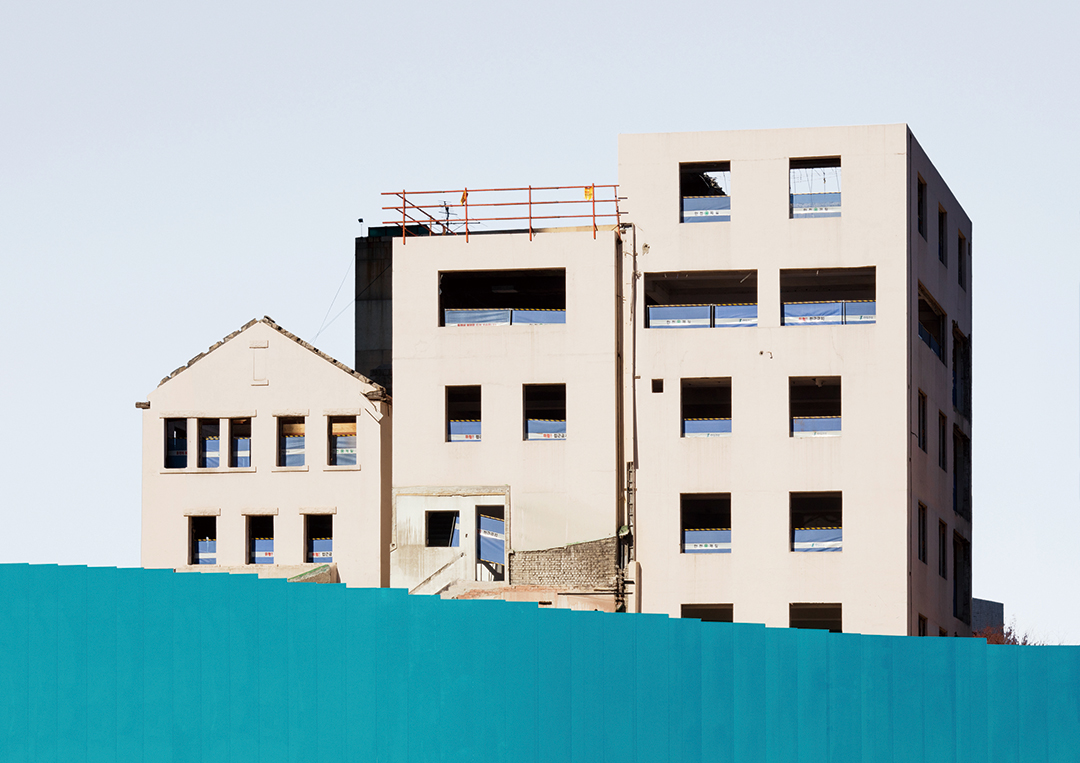 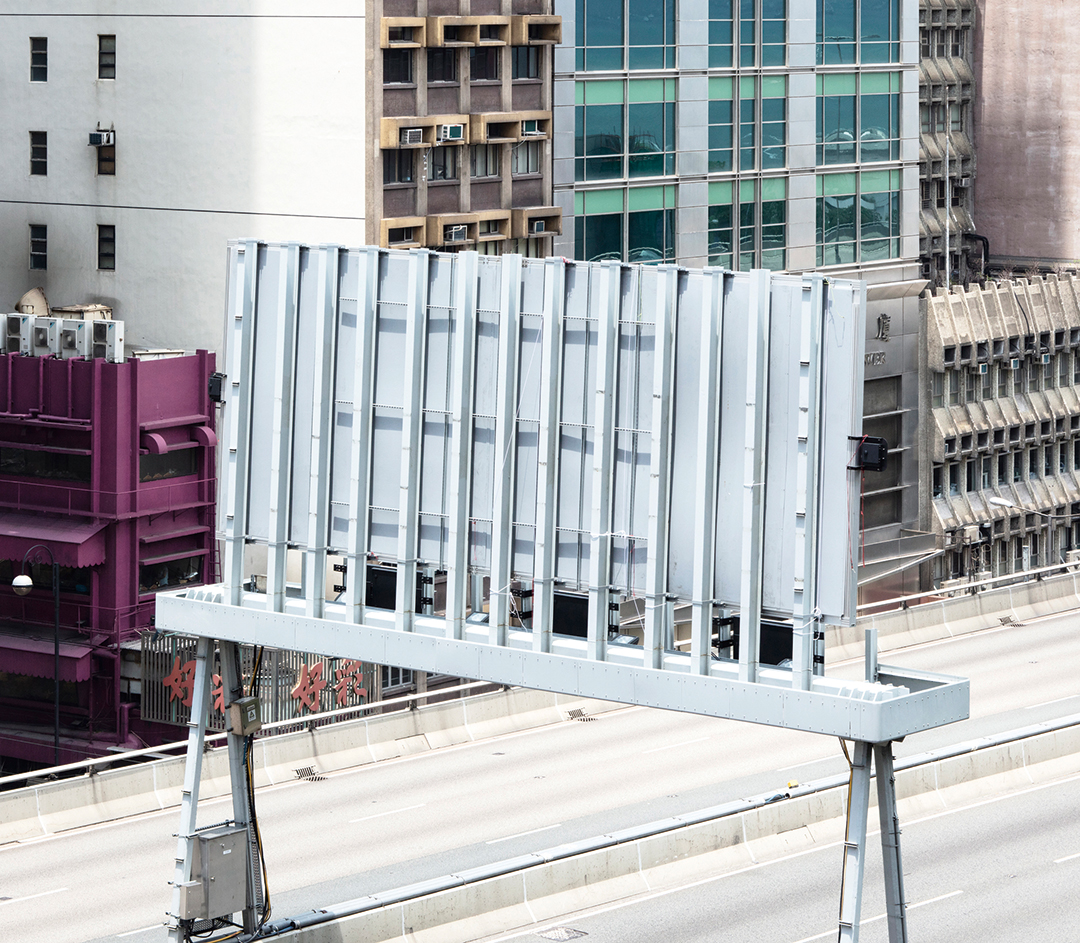 Q. Where do you usually draw your inspiration from?
A. I am inspired by other photo books more than anything else. It's been that way since the beginning.

Q. If an ordinary person like me were to discover new things about cities or buildings, what do we have to do?
A. I am no different. I search the Internet to gather as much information as I can on cities. And it's always better to travel far and wide.