[BRIEF HISTORY] Myanmar’s former capital, Yangon
How was Yangon, Myanmar’s commercial capital, home of the golden pagoda and a place of painful colonial history, created?
01
BC 3000: About 5,000 years ago, humans first started living in Myanmar. Yangon, located with the sea to the south and the Irrawaddy River to its side, was a perfect spot for early settlers. The Irrawaddy River basin was home to the Anyathian tribes of the Paleolithic era. Over the years the Bamar people of eastern Tibet and the Mon Austroasiatic people moved into the area.
02
BC 500: Shwedagon Pagoda is not only the biggest treasure in Yangon, but the biggest treasure in all of Myanmar. According to oral history, about 2,500 years ago, Thuwanna Bhumi, the kingdom of the Mon people, was in Yangon.
Two merchants from this country met Buddha in India and asked for alms of honey-filled rice cakes. Buddha expressed his appreciation by giving them eight strands of his hair. The merchants presented Buddha’s strands of hair to the kind of Thuwanna Bhumi. Then, at a flat hill in Yangon, the king built a sanctuary to enshrine the hair. The Lotte Hotel Yangon is located just north of the Shwedagon Pagoda.
03
638: The Kingdom of Pagan begins in the year 638. There are some who claim that Myanmar was established as the Kingdom of Pagan in the year 107, but no evidence of this has been found. The kingdom was in confrontation with the southern country of the Mon people, but in 1044, the two sides were unified as Myanmar.
Myanmar is a multiracial nation, with more than 100 ethnic groups residing in it. The Bamar people have the highest population at 68 percent, followed by the Shan people at nine percent and the Karen people. Since there only about two percent of the population are Mon, they are underrepresented but were the first to accept Hinayana Buddhism and constructed a high qualify civilization in South Myanmar. The Mon were the ones to introduce rice farming to the region. Yangon was originally home to the Mon people, founded as “Dagon.”
04
1372: In 1277, the Mongolian military attacked the Pagan Kingdom. The Pagans fought back but were destroyed in 1310. But the Mongolians were also pulled out of Myanmar around 1310. As a result, Myanmar was divided between the Inn Wa dynasty, comprised of the Shan people in the north and the Bago dynasty, comprised of the Mon people in the south. The two sides fought for about 250 years.
The Bago dynasty was established as a country in 1372. King Binnya U reconstructed the Shwedagon Pagoda at 18 meters tall and Queen Binnya Thau later extended the height to over 40 meters. King Hsinbyushin later extended it to its current height and Queen Shin Sawbu dressed the Pagoda with gold equivalent to the weight of a body while king Dhammazedi dressed the Pagoda with gold equivalent to four times the weight of himself and the queen. During the Bago dynasty, Yangon was developed into a port city. 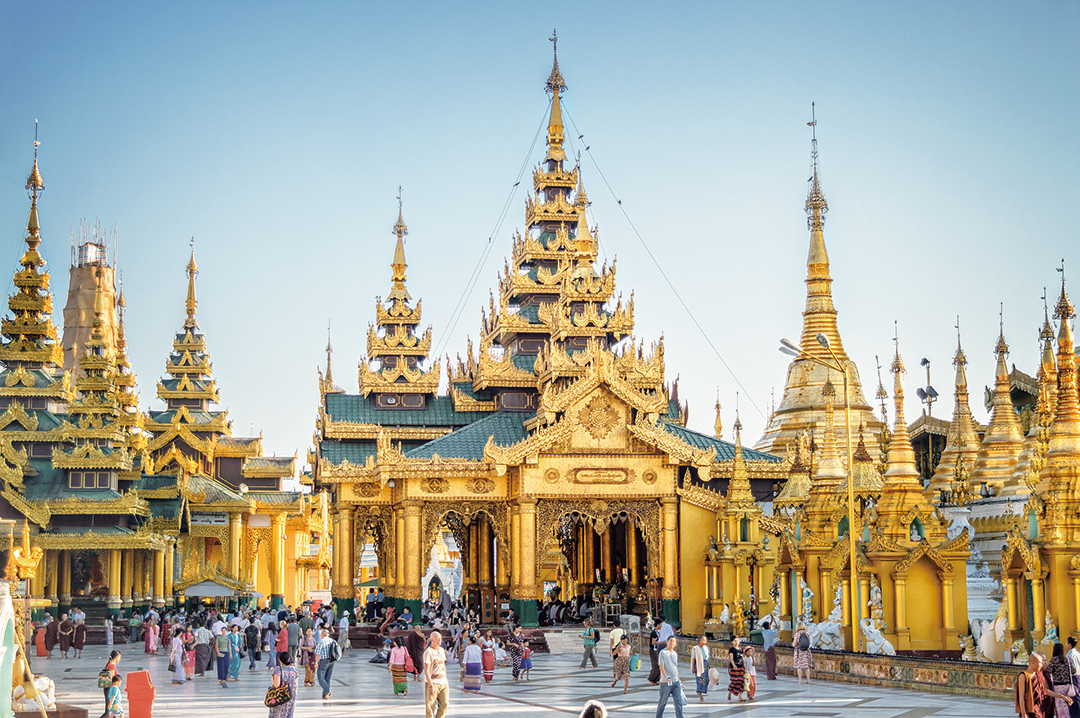 05
1755: King Alaungpaya establishes the Konbaung Dynasty in 1752. The king, who captured Dagon in 1855, renamed the city as Yangon, which means the end of war. As King Alaungpaya destroyed Bago, the capital of the Mon people, Yangon developed into the largest city in southern Myanmar. Also, during the Konbaung Dynasty, a lot of the Mon people immigrated to Thailand and the rest assimilated with the Bamar people.
06
1824: The first Anglo-Burmese War breaks out. British workers in east India were arrested for invading Myanmar while hunting elephants, triggering the first Anglo-Burmese War. The British naval force captured Yangon and the Irrawaddy River, advancing to right below the capital. The war came to a conclusion with a peace treaty at Yandaboo. In the treaty, Myanmar agreed to cede parts of their territory and to allow the British military presence in their capital city. Following the treaty, the British constructed a number of buildings and the Immanuel Baptist church in Yangon. 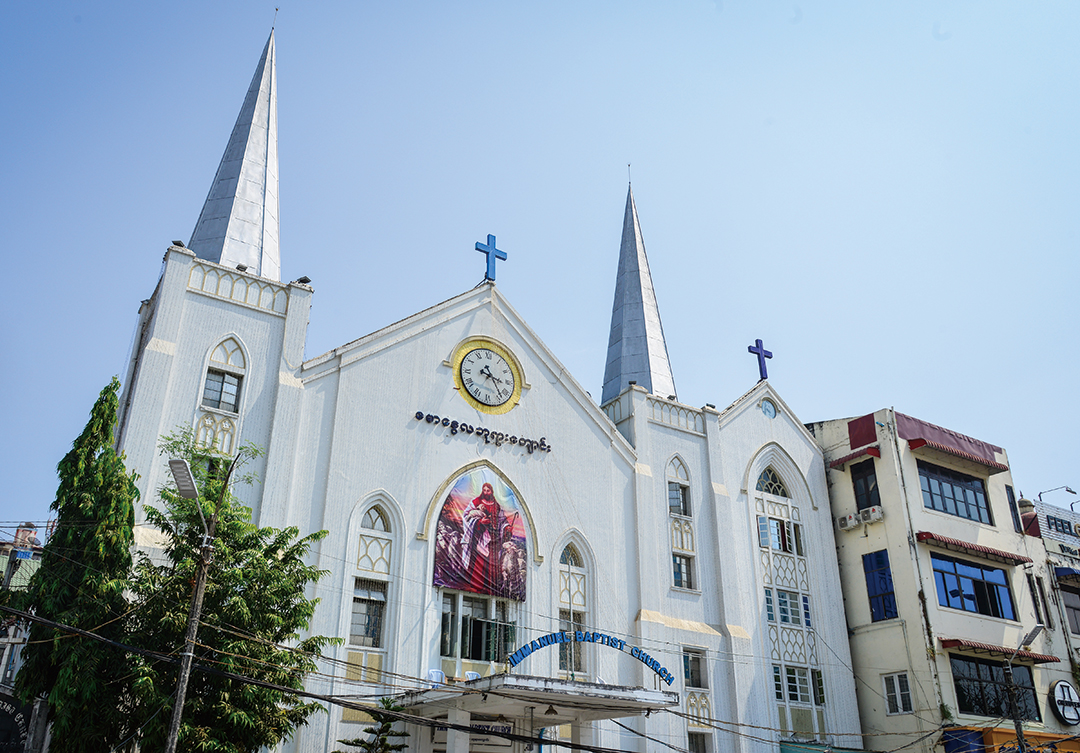 07
1852: The Myanmar government detains a British citizen for not paying a fine. This incident, as well as an incident where a low-ranked British officer was challenged for riding his horse to the government office in Yangon, prompted the second Anglo-Burmese War. At the time, it was a common law even for royalty to dismount when heading into the government office. Just like during the first war, the British captured Yangon and used Shwedagon as their military headquarters. As the British won the war, they began to rule southern Myanmar as British Burma.
08
1853: British Burma moves its capital from Mawlamyine to Yangon. Under military engineer Lieutenant Alexander Fraser’s design, Yangon is modified. Centering on the Sule Pagoda, which is close to the harbor, the city was divided into sections. Starting from this point, Yangon developed into an international port city that connected India and Britain.
09
1857: British armed forces resist the Indian Rebellion of 1857. Bahadur Shah Zafar, who was involved in the rebellion, was arrested and his son and grandson were executed immediately. The British armed forces exiled Bahadur Shah Zafar to Yangon and, in 1862, he died there. He hoped to be laid to rest in India at his ancestor’s grave, but was buried in Yangon. As the British didn’t release the location of his grave, the spot wasn’t discovered until late in the 20th century. 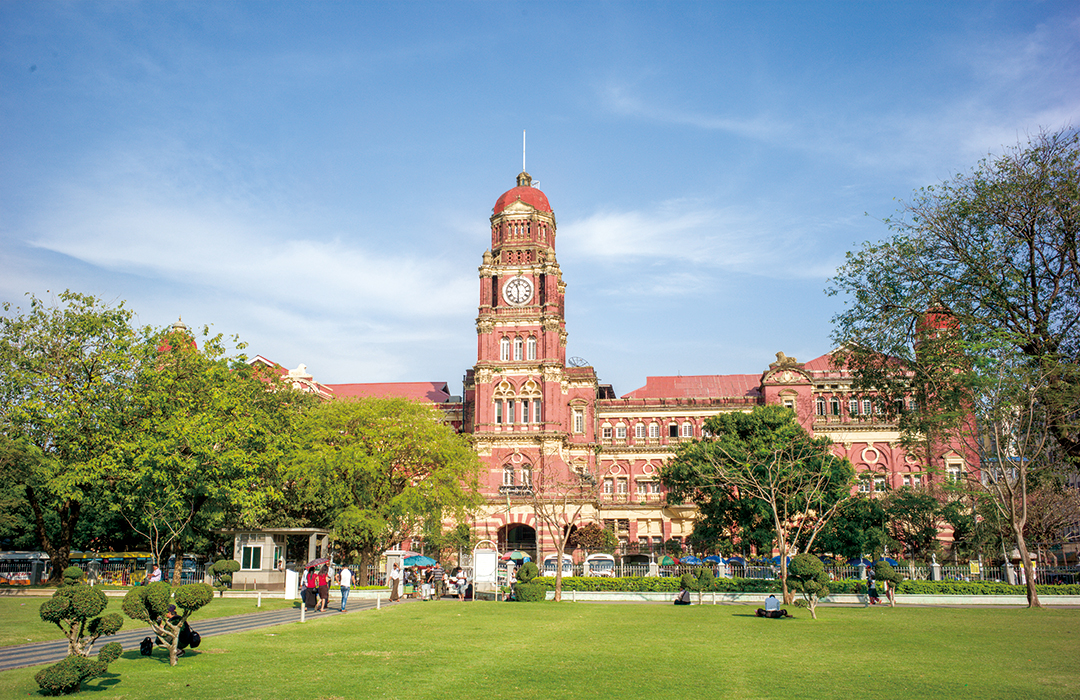 10
1883: The British establish the Royal Mint in Yangon. As the people in Myanmar weren’t used to money, they were very taken aback by the idea of exchanging rice for paper. Myanmar’s agricultural economy was dominated by British, Indian and Chinese moneylenders and agricultural products were sold to the foreign markets, through Yangon harbor.
11
1885: The British try to prompt another war. Despite taking over southern Myanmar, the British seemed intent on another war. They demanded the country give up its diplomatic rights, and the Myanmar king accepted the requests.
The British pretended they didn’t hear the response so they attacked the capital and captured it. The king and the queen were carried off in a cart and banished to India. Myanmar became a British colony and was incorporated as part of British India. The governor stayed in India and a chief executive officer, who was sent by the Indian governor general, was sent to Yangon to rule Myanmar. Yangon was given a new British name, “Rangoon.” 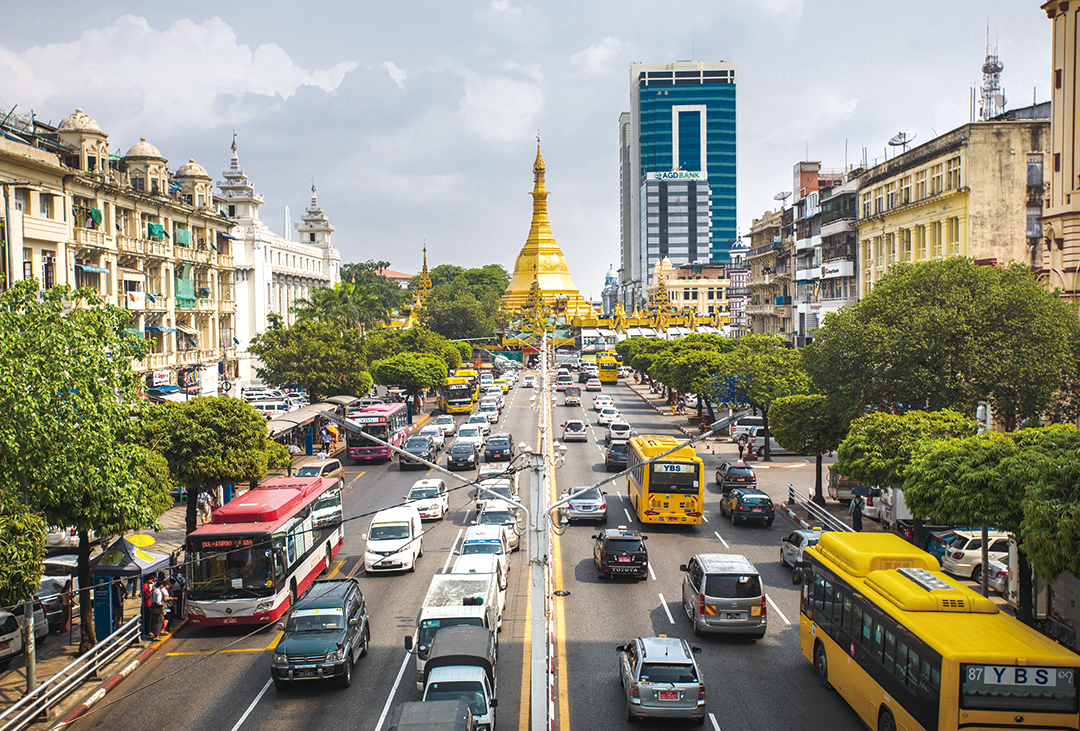 12
1887: A railroad that connects Yangon and Pyay is created. A railroad track from Yangon [the capital during the Konbaung Dynasty] to Mandalay was completed in 1889. The following year, they railroad was extended to Myitkyina and, in 1907, the track continues to Lashio, Pathein and Mawlamyine. Yangon arose as the center of the railroad transportation network.
13
1920: Myanmar’s oldest university, Yangon University, is established. This is an affiliated college of the University of Calcutta, which was established back in 1878 by the British colonial administration. It became Yangon University in 1920, when University College and Judson College were merged. Following this, the majority of Myanmar’s institutions of higher education were registered as affiliated organization of Yangon University. But after the 1960s, the majority of the affiliated universities broke away to become separate schools.
14
1937: Myanmar is finally separated from India. A lot of problems occurred as Myanmar was included as part of the Indian state as a lot of Indians immigrated to Myanmar, dominating the country commercially. Right before WWII broke out; more than 50 percent of the residents in Yangon were Indians. Due to this, Myanmar continued its liberation movement and, in 1937, the British government officially approved Myanmar’s separation from India. 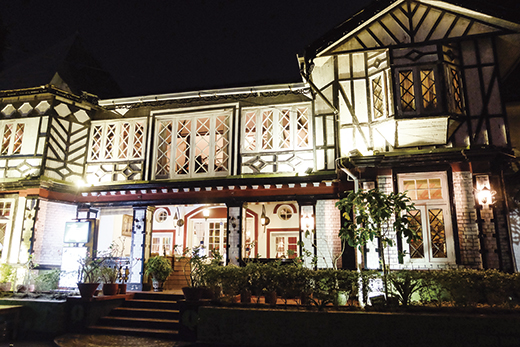 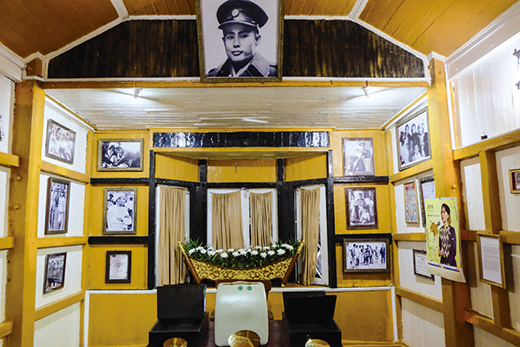 15
1948: Aung San, the father of Myanmar’s independence, and 30 young men had military training in Japan to prepare for their final war against the Britain. Myanmar’s independence army allied with the Japanese armed forces to fight against Britain. As Singapore’s front line collapsed, British armed forces retreated to India and, in 1942, Myanmar was liberated from Britain.
But their ally, Japan, started to colonize Myanmar. Aung San allied with the former enemy, Britain. In March, 1945, the Burmese army of 10,000 soldiers was created to fight Japan and successfully reclaim Yangon. On Jan. 4, 1948, Myanmar officially declared its independence from the United Kingdom. 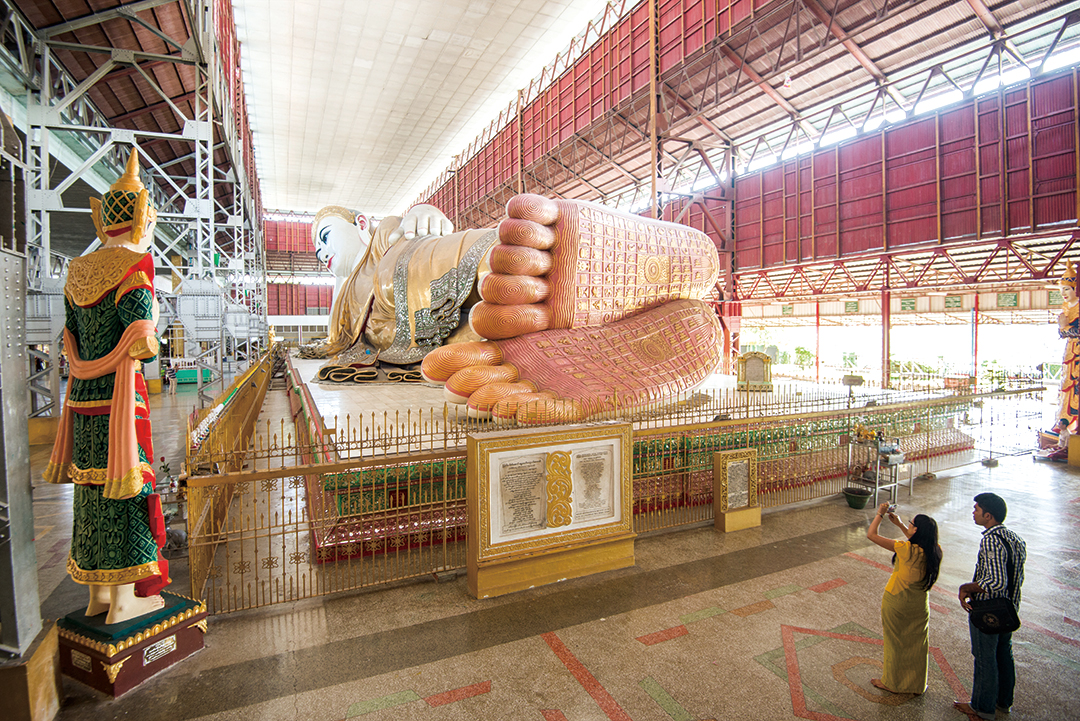 16
1973: A new Buddha is completed. In the northeastern valley of Shwedagon is Kyauktawgyi Buddha Temple. This temple is famous for its huge reclining Buddha, which is 67 meters long and 18 meters high. The reclining Buddha was first built in 1907, using a donation from the family of a member of the national assembly. As it eventually collapsed due to the high temperature and humidity, it was completely demolished in 1957. A new reclining Buddha began to be built in 1966 and was completed in 1973. 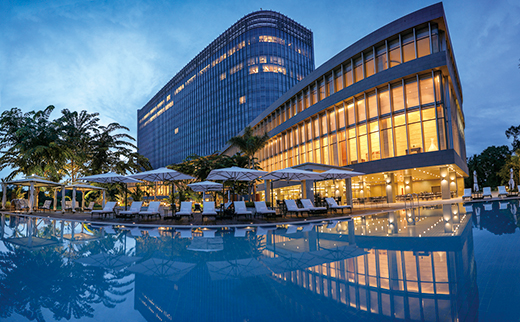 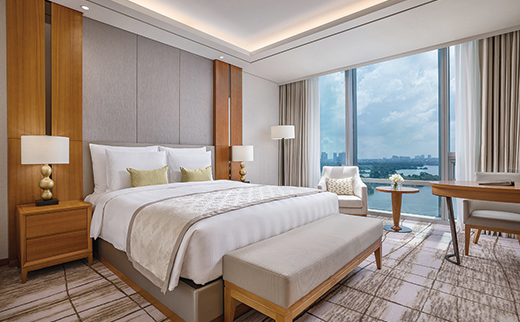 Where to Stay in Yangon: LOTTE HOTEL YANGON
LOTTE HOTEL YANGON is located north of the Shwedagon Pagoda, a sacred place, and south of the Inya Lake, the largest lake in Yangon. Guests can see the beautiful Inya Lake from their rooms and the hotel has its own grand banquet room for events and seminars as wells as various restaurants. It also has outdoor facilities like an infinity pool and pool bar, providing a comfortable rest for all hotel guests.