Chamorros Embrace History of the Pacific
There are people who have established a megalithic culture independently, harbored the first European-style city in the Pacific, and are living in the westernmost American territory. They are known as Chamorros. Although they form the largest ethnic group in Guam, there is no single descendant with pure Chamorro blood left on the island.
Why Did Humans Settle in the Pacific?
The Pacific Ocean is so vast that it takes up a third of the surface area of the earth. It is also deep enough to contain half of the water that exists on earth. Then, when did humans start dwelling in the islands scattered around this beautiful yet mysterious ocean?
Since the first appearance in East Africa around 2-5 million years ago, human ancestors constantly moved northbound and eastbound. About 60,000 years ago, they reached New Guinea and Australia after tracing along the eastern coastline of Indonesia, yet to be under water. However, they soon got trapped on land surrounded by deepening waters. Unable to move on foot, they built ships to get to other Pacific islands. 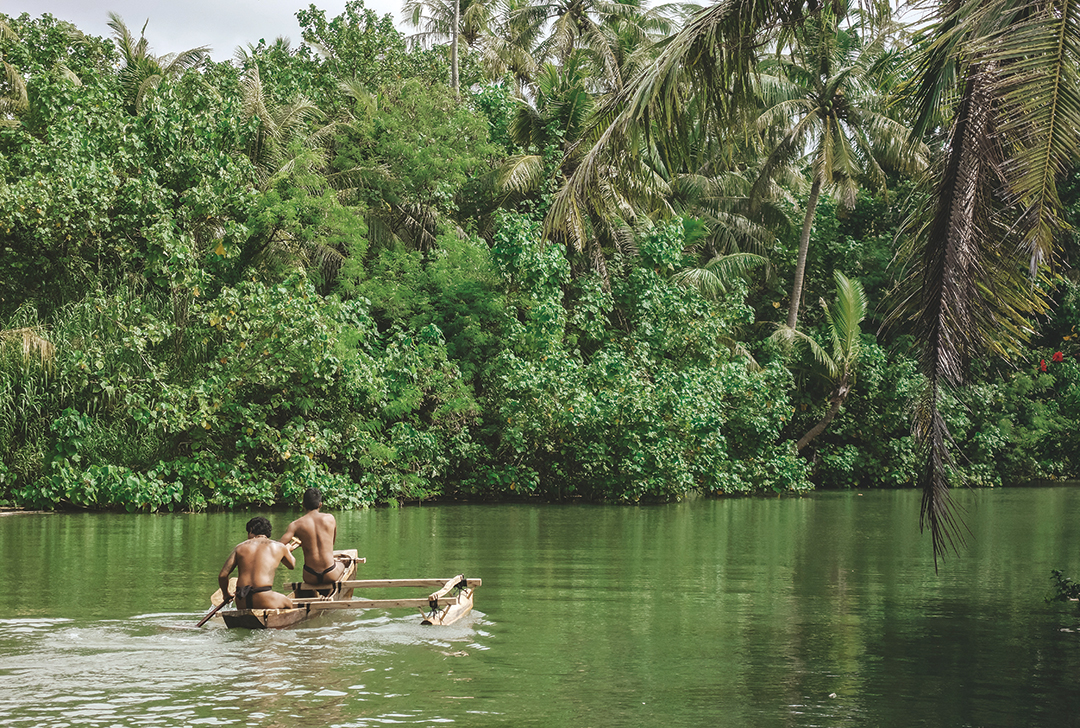 The islands of the Pacific are categorized into three: Micronesia, Melanesia, and Polynesia. Meaning small(Micro) islands(Neos), Micronesia lies south of Japan. South of Micronesia is Melanesia where dark-skinned(Melos) people lived. Papua New Guinea and the Solomon Islands belong there. East of Micronesia sits many(Poly) islands including Hawaii. The categorization is necessary due to the fact that natives of these islands have each formed different cultures, having moved in during different time periods. 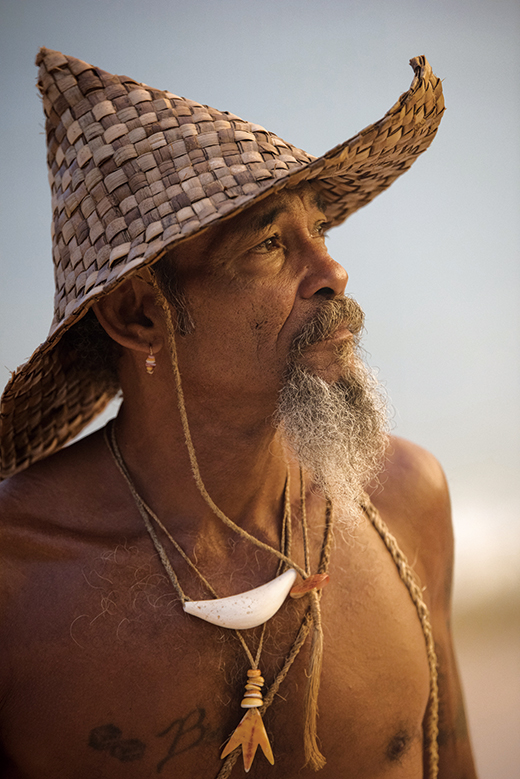 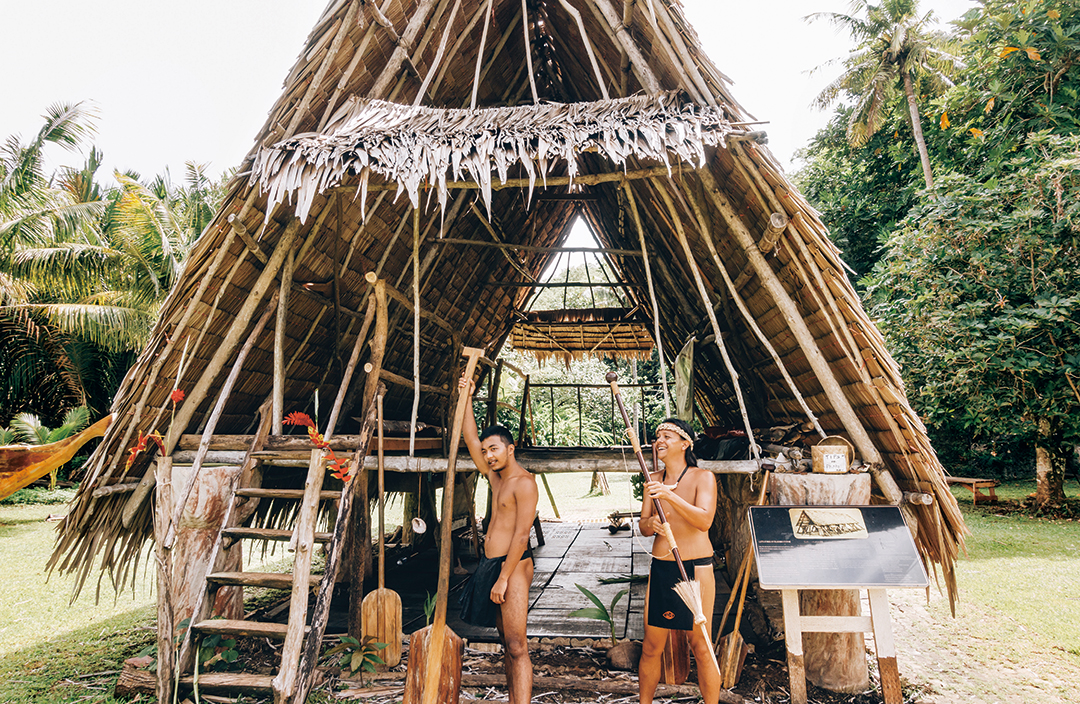 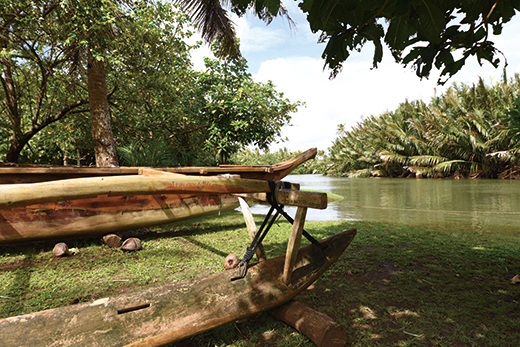 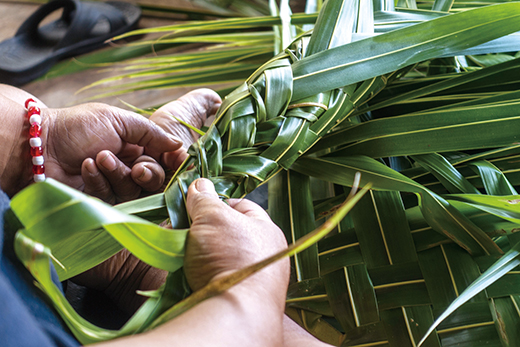 Chamorros in the Latte Age
Since 2,000 B.C., Chamorro people have established a hierarchical society, dividing its people into four classes of chamorri(leaders), matao(nobles), achaot(demi-nobles), and manachang(commoners). The upper class lived in the coastal areas, controlling marine resources, while the lower class worked in agriculture in farther inland areas. Chamorros consistently developed their culture. They made pottery and extracted salt from seawater. They made ropes using coconut husks, and explored on canoe outside the boundaries of the Mariana Islands.
The ancient era of the Chamorros is called the Latte Age. It is derived from the fact that they established a megalithic culture, exemplified through latte stones. Built for the first time around 500 B.C., a latte stone is a pillar(haligi) capped by a stone capital(tasa), looking like a large mortar. A smaller latte stone is about a meter high, while big ones reach as high as five meters. Chamorros used to build a thatched roof house on top of latte stones of a similar size, forming two lines. Between four and seven stones were arranged in a line. The size and number of latte stones indicated the resident’s social status. 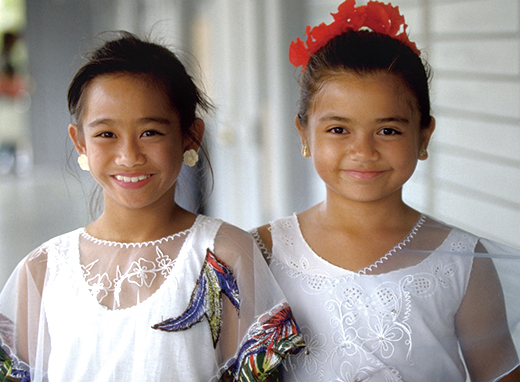 Traditional cultures of Micronesia have a few common traits. Being a strictly matriarchal society, Micronesians cherished the sibling relationships. Adoptions and the sharing of childrearing responsibilities between extended family members were frequent. The familial bond between those who share the house and food was incredibly strong. The same goes for Chamorros. Under its matrilineal tradition, Chamorro people buried their ancestors between latte stones when they died. They literally lived over their ancestral graves. Such closeness to ancestors have contributed to the birth of a powerful shamanistic culture. They had shamans, makahnas and kakahnas, who sang to the spirits of ancestors and suruhanas and suruhanus who used medicinal plants to treat sick people. There are various legends and folklore about ancestors and taotao mona, the guardian angel, in Chamorro culture. Science and cultural anthropology have failed to explain the ethnic origin of Chamorros. Even so, Chamorro people accurately pronounce Puntan, referring to the first settler in Guam. It’s a reminder of the power of an orally transmitted folktale.
Chamorros Under the Spanish Influence
Since March 6, 1521, the history of Guam and Chamorros has completely changed its course. European regimes in the 15th century sailed around the world, searching for spice in the East. After Portugal gained control over the eastern sea routes and monopolized the spice trade, Spain endeavored to pioneer a new trade route. The two names representing such efforts by Spain are Columbus and Magellan.
After Columbus landed in America in 1492, Spain engaged in marine expedition in full scale. Magellan left Spain in 1519 to sail around South America and cross the Pacific, reaching Guam on March 6, 1521. Hundreds of canoes surrounded the Magellan fleet, but there was no physical collision. Magellan’s company presented iron to Chamorros and received food and water in return. After spending three days in Guam to fix their ship, the fleet left the island.
In 1565, Governor-General Legazpi, appointed by the Spanish government to take charge in the Philippines, claimed the Mariana Islands for Spain. Although it signaled the beginning of Spanish rule that lasted for 333 years, it was initially for nominal reasons. It was in 1668 when Father Diego Luis de San Vitores, a member of the Society of Jesus, landed on Guam, that the situation changed. 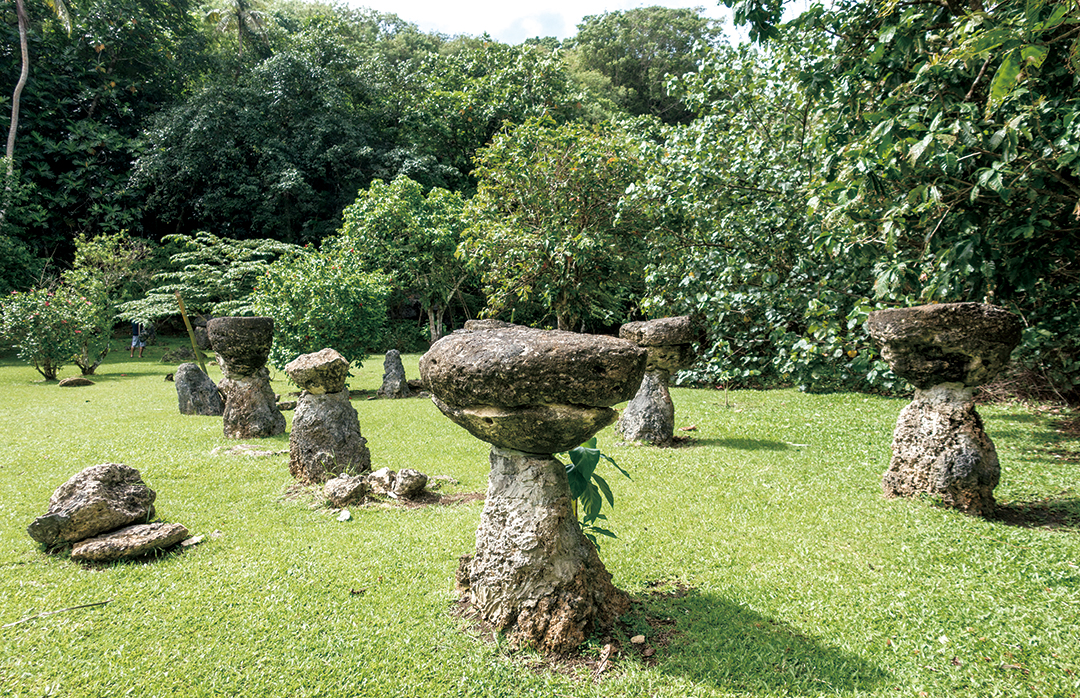 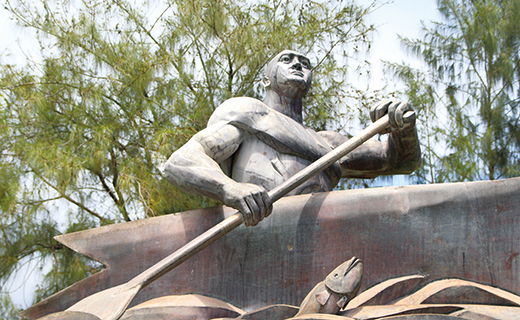 A monument for Gadao, a legendary Chamorro chief © Shutterstock 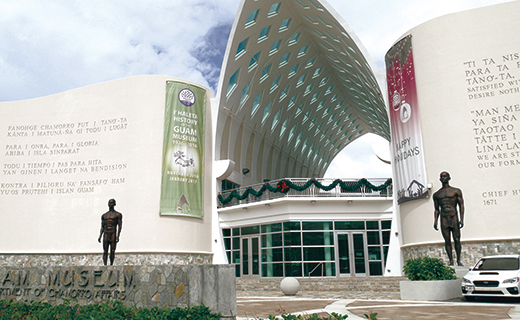 Entrance to the Guam Museum © Shutterstock

San Vitores did not approve of the Chamorro tradition of worshipping ancestors. Their liberal culture allowing Chamorros to socialize in nudity, or to divorce or remarry only seemed to be an evil practice that had to be rid of.
San Viteros, determined to spread Christianity, succeeded in converting many Chamorros to Catholicism. He even built the first Catholic church in Guam in 1669 on the land he had been gifted by Chief Quipuha. The Dulce Nombre de Maria Cathedral Basilica in the village of Hagåtña, destroyed during WWII and rebuilt in 1959, is still a popular tourist destination today. Some Chamorros, however, were angry with the way Spain and Catholic missionaries ruined their tradition. In 1672, San Vitores was murdered after baptizing the daughter of a Chamorro chief. Spain sent its troops in retaliation, which led to the Spanish-Chamorro War. José de Quiroga y Losada, who came to Guam in 1679 as an acting governor, ruthlessly trampled on the Chamorro people until his death in 1720.
The village of Hagåtña became the seat of the Spanish government and the first European city in the Pacific. Chamorro people who stuck to their tradition became the target of suppression and the population of the Mariana Islands started to show a sharp drop. It was to the point where only several thousands out of the entire native population estimated to be around 100,000 to 200,000 were believed to have survived colonization. Currently, 80 percent of the Chamorro language is thought to have derived from Spanish. It is clear how powerful the influence of Spain must have been on the Chamorro folks. 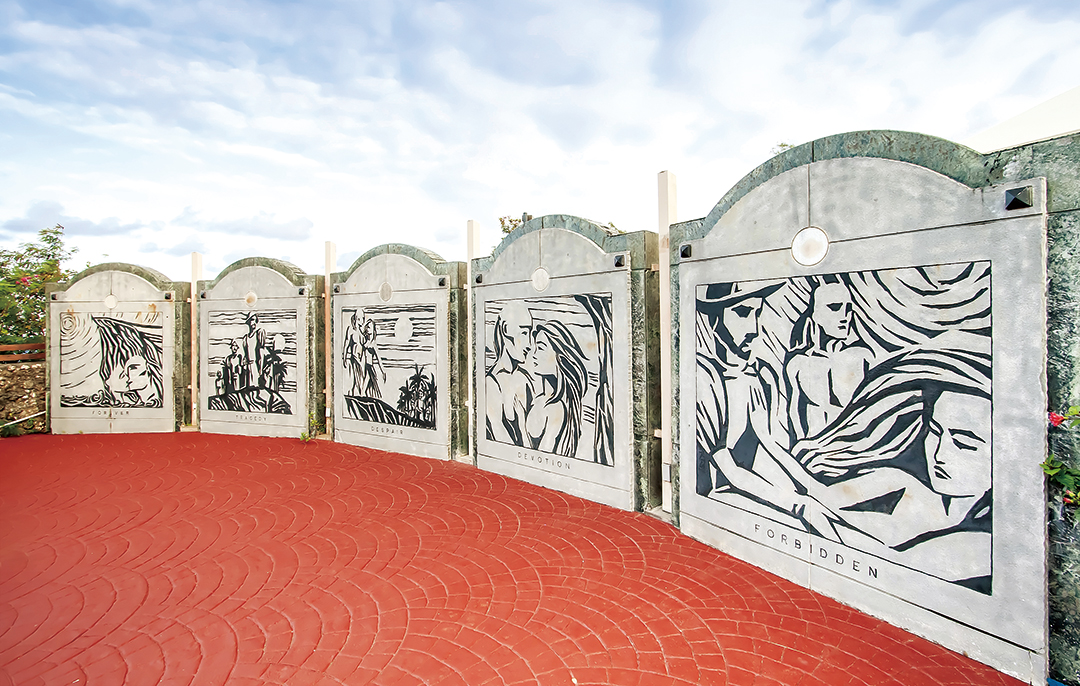 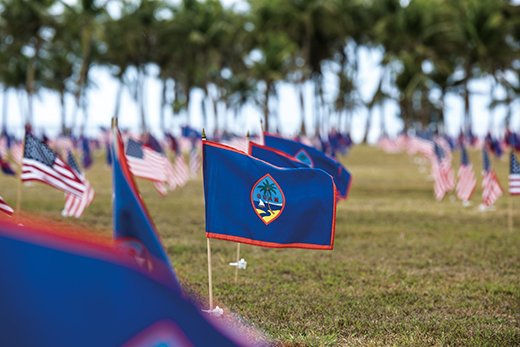 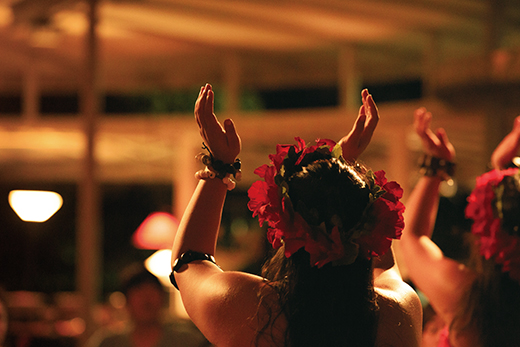 Chamorros After Spanish Rule
In 1898, Spain engaged in a war with the U.S. over Cuba. Several months later, Spain got defeated, ceding the Philippines and Guam to the U.S. government, which later highlighted the fact that Chamorros had revolted against the Spanish rule to preserve their tradition. Guam’s flag of U.S. territory, enacted in 1918, sums up the history and culture of the Chamorro people. The red border represents the blood of the Chamorros and the blue surface, the Pacific Ocean. The center almond-shape emblem is originated from the traditional shield used by Chamorro ancestors. Inside the emblem is drawn the Hagåtña River flowing into the sea where a ship is sailing, as well as a sandy beach and a coconut tree. They all symbolize what’s important to Chamorros--venue, food and material for weaving, and transportation. The landform at the back is the Puntan Dos Amantes(Two Lovers’ Point) cliff where, legend says, two Chamorro lovers tied their hair together and leapt to their death after the girl was forced to marry a Spanish officer. 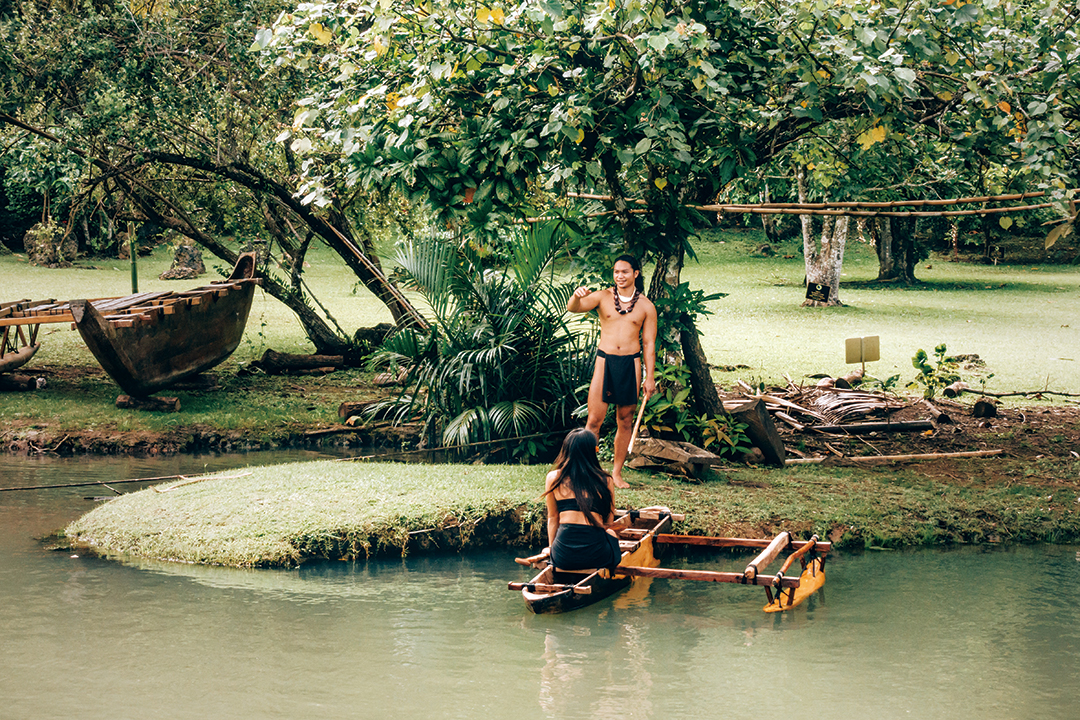 Guam was under Japan’s control for a while during the Pacific War but America reclaimed it after the war. The foreign regimes continued to affect Chamorros and their culture. Yet, it never became completely Spanish or American. In the Age of Exploration, Spain spread crops from Latin America to the world, including corn, potato, sweet potato, tomato and pepper. Pepper is crucial in cooking traditional Chamorro cuisines. Japan also affected Chamorros’ diet during its brief occupation. Chamorros add onion, pepper and coconut to meat, marinated for 3-4 hours in soy sauce and vinegar, for their traditional barbecue dish. Kadon pika is similar to Korea’s braised spicy chicken. Finadene sauce uses lemon and spicy pepper with soy sauce. Philippine-style pancit noodles and red rice pie show how the present Chamorros have been adapting, with continued influence from foreign cultures. The government complex adopted both Spain’s architectural style and the Latte Stone heritage. Traditional Chamorro instruments are used to play Latin music. In the Chamorro village, a night market opens every Wednesday. The Guam Museum is featuring a year-round exhibition entitled, “The Journey of the Chamoru People.” The Chamorro culture can be found everywhere in Guam, and it’s constantly evolving. We also continue to be fascinated by a culture that embraces the hurtful past and reinvents itself over and over again. 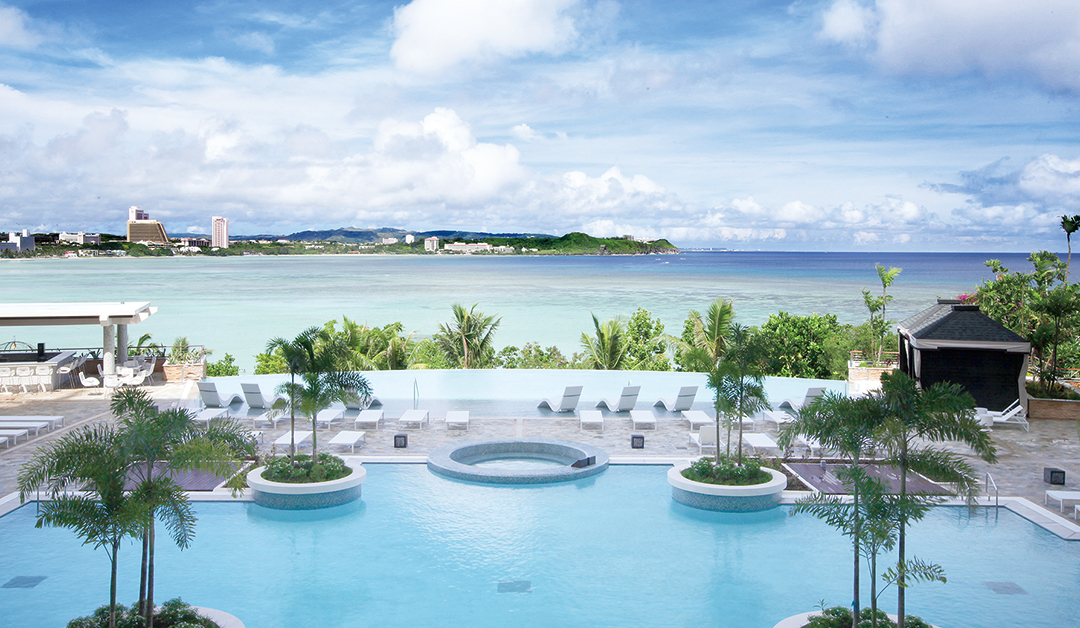 Where to Stay in Guam: LOTTE HOTEL GUAM
Located in front of Tumon Beach known as Guam’s top vacation venue, LOTTE HOTEL GUAM boasts a scenic ocean view. In close proximity to various restaurants, cafes and shopping malls, the hotel is popular among family vacationers. Guestrooms featuring a comfortable yet chic, modern design, an outdoor swimming pool with the view of the horizon, and various hotel facilities provide you with the best relaxation opportunity in Guam.