Finding Viktor Tsoi in Russia
In what was known as the Soviet Union, now Russia, Viktor Tsoi was not just a singer of Korean descent, but a legend. We looked for traces of Viktor Tsoi who became a myth after dying from a car accident 29 years ago.
“Blood type - on the sleeve / My serial number - on the sleeve / Wish me luck in the battle / wish me: / Not to be left lying on this grass / Not to be left lying on this grass/ Wish me luck / wish me / wish me luck!”
From the lyrics of “Blood Type,” translated in English

In 1988 when Americans were raving about the movie depicting a battle in Afghanistan between thousands of Soviet Army troops and Rambo, a retired US soldier, young people in the former Soviet Union watched Viktor Tsoi fighting alone against drug dealers in the movie and sang along to a song from its soundtrack “Blood Type.”
Voice of Youth, Viktor Tsoi
Viktor Tsoi(spelled Victor Choi in English) was a singer and actor most loved by the young Soviet population in the 1980s. Known as “everything to everyone,” it is hard to define him as just a singer. The mid 1980s was a period when perestroika(restructuring) and glasnost(openness) began in the Soviet Union, after the Cold War with the U.S. ended. When the socio-economic situations in the country stagnated beyond repair, Mikhail Gorbachev, then general secretary of the Communist Party, carried out systematic reforms in regards to market liberalization and nationalism. Unfortunately, it did not bring the changes that had been intended. Government officials became irresponsible, and businesses and workers became unmotivated, which led to decreased productivity. It was difficult to expect an efficient society. The policy of the government did not affect real life, and young people were confused. Their desire for reformation and change grew uncontrollably. It was in a way natural that the strong melody and revolutionary lyrics of Viktor Tsoi pierced through to the heart of desperate young men and became their love song. 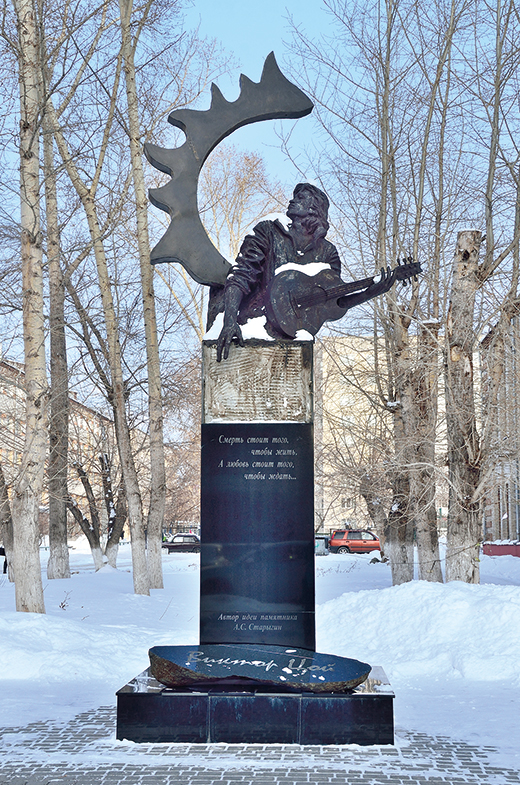 A commemorative plaque for Viktor Tsoi in Barnaul, Russia © Shutterstock

"Our hearts demand changes. To our laughter and to our tears. We're waiting for changes."
Lyrics from 'I Want Changes'
Rock Music Boy From Leningrad
Viktor Tsoi was born in 1962 in Kazakhstan, moved to Leningrad(St. Petersburg at present), and spent his childhood there. His father was a second-generation Soviet-Korean and his mother a Ukraine-born Russian. Viktor Tsoi was a third generation Kareski, roughly meaning Koryo-saram(ethnic Koreans in the post-Soviet states). He liked to draw as a child and later attended an art school. He had artistic talent as he used to sell handmade wooden dolls or portraits of the rock group Led Zeppelin on the market. 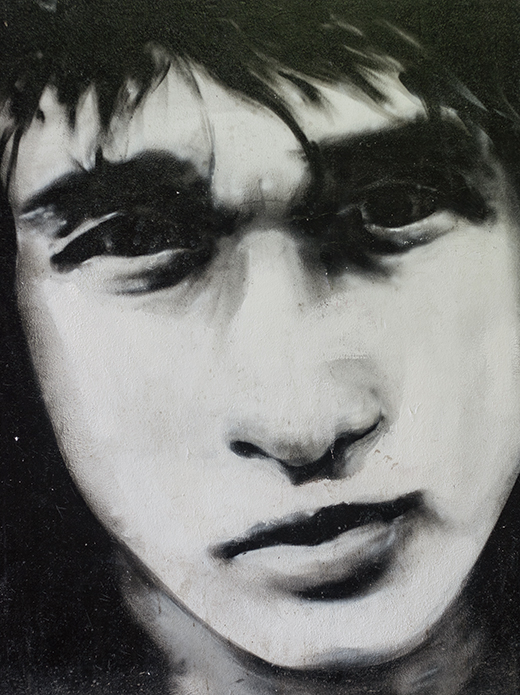 A mural of Viktor Tsoi by a fan © Shutterstock 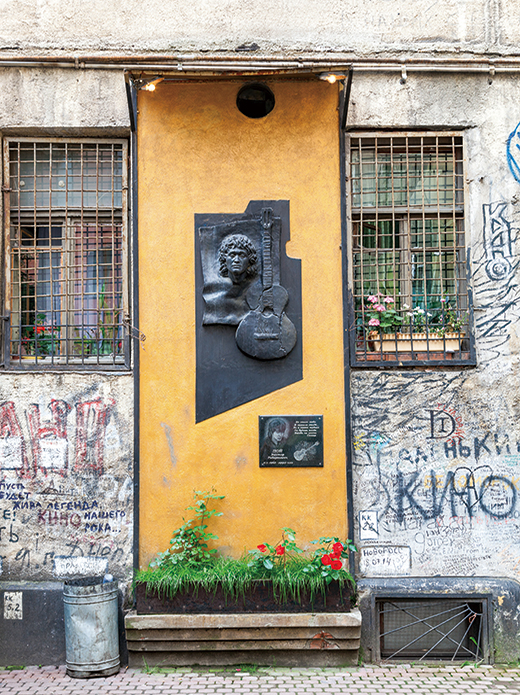 He was especially fond of rock music. He played the guitar and wrote songs while working at the boiler room of an old apartment. The trend of new wave music from the West reached the Soviet state as well. He was particularly engrossed in the music of rock band The Smiths. In 1982 at age 20, Tsoi met guitarist Alexei Rybin. Having much in common regarding their musical aspiration, they formed a rock band named Kino which later had four members. Kino in Russian means film. They usually performed at a club or a bar, and quickly became popular among young customers. The band had a demo tape, but having the same price as three bottles of vodka, it was circulated in public as a poor-quality copy. 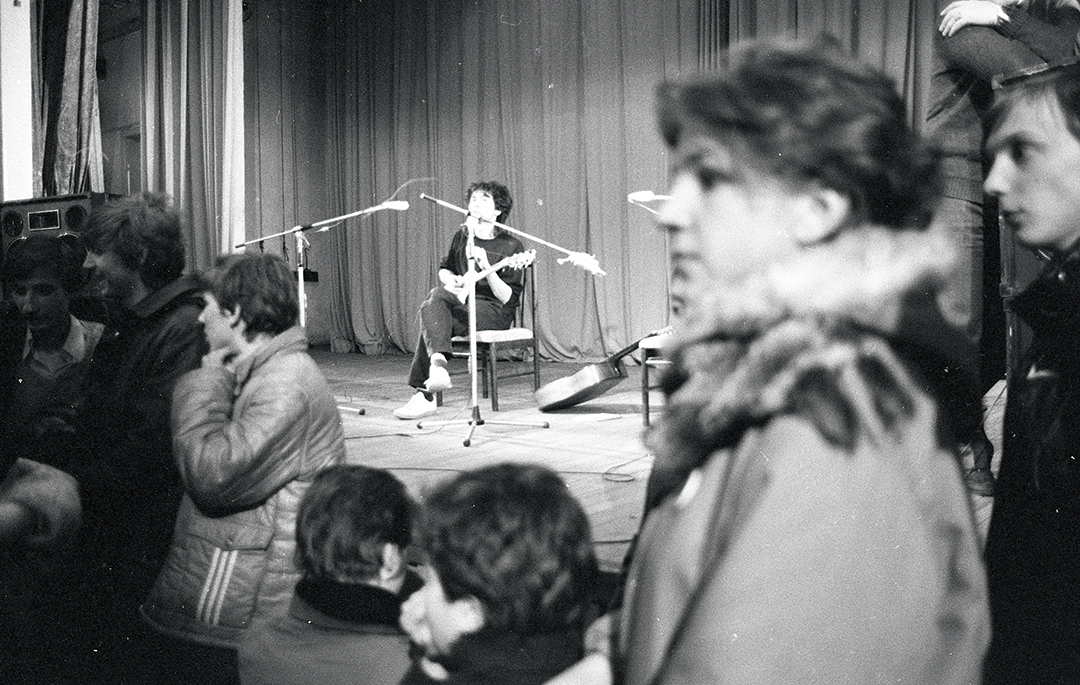 Kino and His Dramatic Life
Viktor Tsoi and the band Kino gained fame through a movie. The ending of a popular Soviet film in 1987 featured a live performance of Kino. The song they played “I Want Changes” became an underground anthem for young men, and was sung on the street. The refrain of people expecting changes struck a chord with many frustrated citizens. Although the lyrics were vague about what kind of changes were anticipated, young people and the media associated the line with social changes. Afterwards, Viktor Tsoi starred in several other films and remained successful. It wasn’t so much about his acting, but more Viktor Tsoi himself and what he symbolized. The 1989 movie recorded 15 million viewers. In a 1989 survey by the movie magazine Soviet Screen, Viktor Tsoi was named the Best Actor of the Year.
In his heyday of continued hits and favorable reviews, Viktor Tsoi died a sudden death. On August 15, 1990, he was involved in a car collision in Riga, the capital of Latvia. It wasn’t clear if he crossed the centerline due to fatigue or lack of caution. The only certainty after the accident was that he was gone. He was 28. His death had the Werther effect in the country, with some fans choosing to take their own lives. It was like in a movie--the way he died and how his fans said goodbye to him. 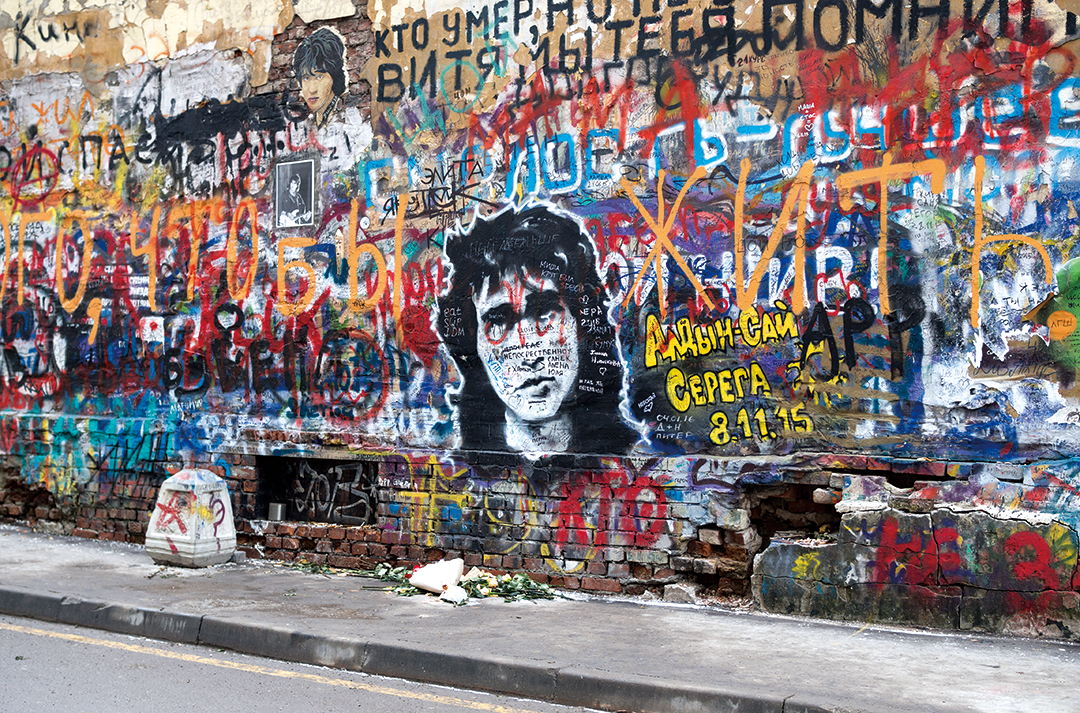 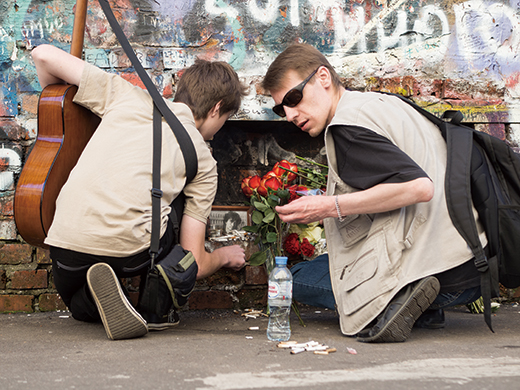 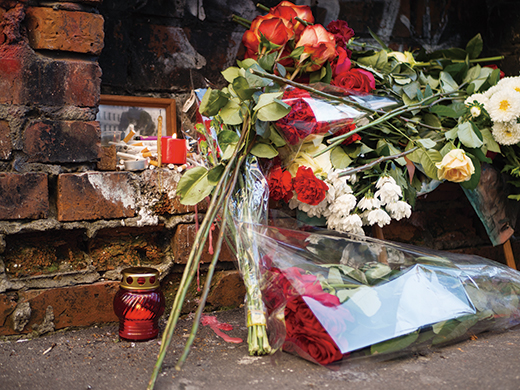 Encountering Viktor Tsoi on the Street
It’s been 28 years. Russians, however, still remember Viktor Tsoi and miss him. After his death, he was inducted into the Hall of Fame for Soviet singers. It was only after Vladimir Vysotsky, a legendary singer loved by all Soviets. You can easily feel the sentiment toward Viktor Tsoi in the former Soviet area such as Moscow, St. Petersburg, and Belarus.
Viktor Tsoi was buried at Bogoslovskoye Cemetery in northern part of St. Petersburg where he grew up. He loved Leningrad. He even sang about it. “What I loved was the moon and the stars of Leningrad. I do not like Moscow,” read his lyrics. When you enter the cemetery, you can hear the music of Viktor Tsoi from the distance. Follow the music and you’ll reach his gravesite. There are still fans who will sing in front of his tombstone, which is behind a heap of flowers from his fans. Even in Moscow that he didn’t like, there are many who commemorate his legacy. On Arbat Street in Moscow, an entire wall is dedicated to Viktor Tsoi. Called “Tsoi’s Wall,” it is covered with drawings, messages, his lyrics and flowers from his fans. Some of the messages claim that he hasn’t died but just went for a cigarette. Every August around his memorial day, Viktor Tsoi’s music resonates around the wall. As flowers and cigarette butts pile up at the wall, more and more fans gather in memory of him and mourn.
According to Russia’s internet portal Yandex, the cumulative time that Viktor Tsoi’s music was played from its music service exceeds 1,000 years. It will take that much time before his memory fades. 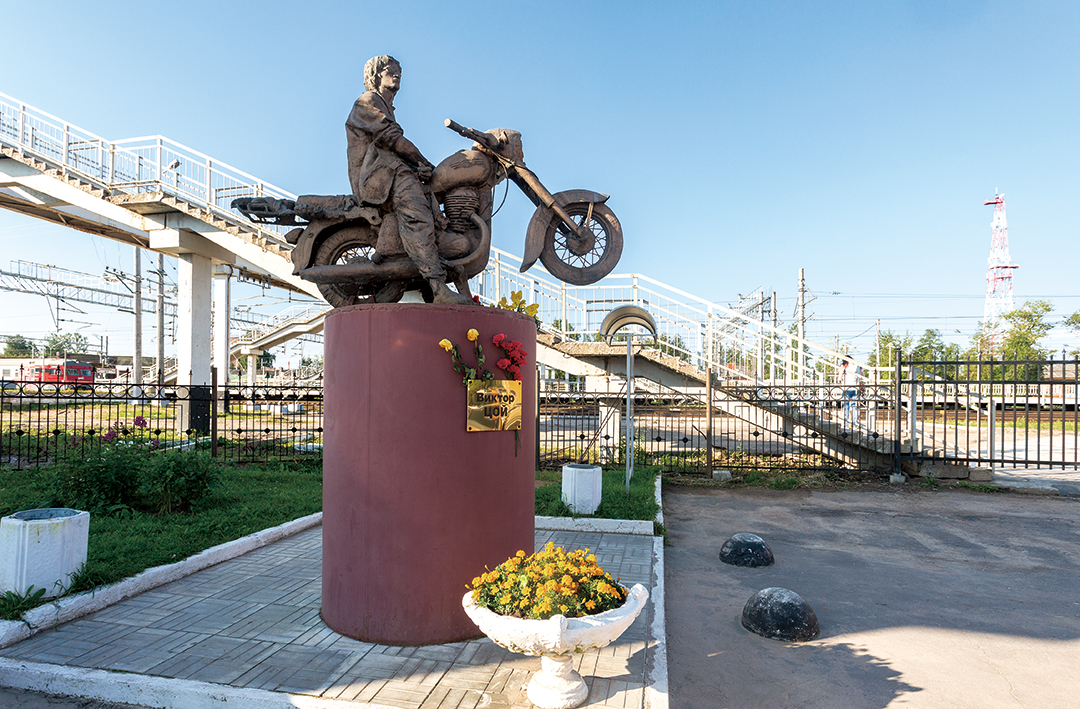 Statue of Viktor Tsoi in Okulovka in Russia © Shutterstock

Where to Stay in St. Petersburg: LOTTE HOTEL ST. PETERSBURG 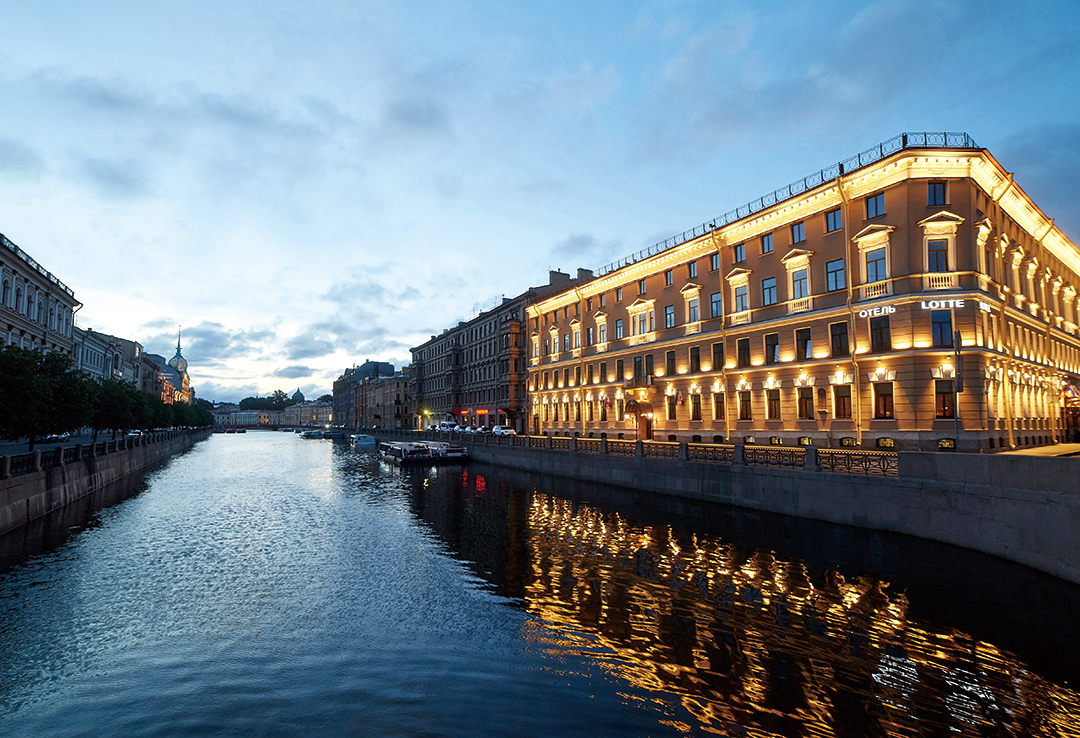