Strange World of Haegue Yang
Haegue Yang presents a world built on her own abstract language in the solo exhibition "When the Year 2000 Comes." It’s a show that encapsulates Yang’s thoughts and great interest in a wide range of space-time that she’s been studying over the past quarter century.
A strange world of Haegue Yang popped up in the middle of Samcheong-dong in Seoul. “When the Year 2000 Comes,” a solo exhibit by Yang scheduled to run through Nov. 17 at Kukje Gallery, encapsulates Yang’s thoughts on a wide range of space-time that she’s been exploring over the past 25 years, and also her interest in many different fields such as history, culture and society. In this hybrid space where contrasting concepts, such as time and space, ancient times and modern era, and folklore and civilization freely converge, breaking conventional wisdom is par for the course. You can feel the future through the past. You can turn linear time upside down. You can also witness objects that have been freed from gravity’s control. The moment when disorder becomes order, Yang’s controversial space will come at you like a universe on verge of a huge explosion.
This exhibition has brought together multisensory components of Yang’s works, which transcend international boundaries and eras. As you enter the gallery, you’ll be greeted with the song by Min Hae-kyung titled ‘AD 2000’ (1982). The song, which defines the year 2000 as “a happy year when every dream comes true,” is hopelessly hopeful. “When AD 2000 comes, it’ll be time to travel to space / We’ll ride a rocket and fly between those stars / It’ll be an endlessly happy world without war / saba (saba) saba (saba)…” If you read between the lines of these naïve words, you’ll recognize all sorts of times and tenses. The past (1982), the future (2000) and the present (2019) are all tangled up. From the gap between the collision of reality and hope – summarized in the words ‘saba saba’ in the 1980s – and space-time that can only be explained as ‘wormhole’ in science, Yang discovered the justification for her exhibition: that time, which you once believed as absolute, could be relative and theoretical. 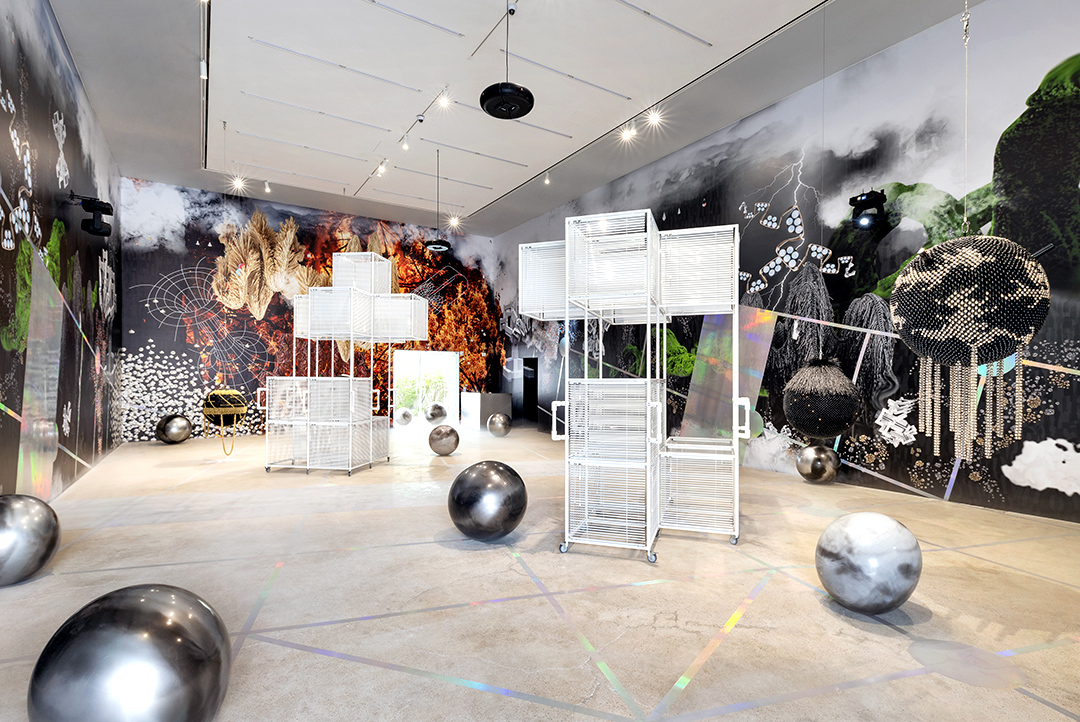 Once inside, works that show Yang’s present will stimulate all five senses. Standing before you are two 'Sol LeWitt Vehicles (2018),' which combine her ‘Sol LeWitt Upside Down,’ a large installation made of blinds unveiled at a solo exhibit at Leeum Samsung Museum of Art four years ago, and ‘Dress Vehicles (2011~),’ a sculpture that people can put on like clothes and control. Four pieces of ‘Sonic Gym (2019)’ sculptures hang from the ceilings, creating echoes and sounds. And as you walk between scented gym balls through smokes that create a mysterious atmosphere, you’ll be hearing some sort of sound. During the inter-Korean summit in April 2018, the two leaders chatted at the end of a bridge. The moment came to be known as the ‘Dobodari Conference.’ Yang extracted sounds of the camera shutters going off and birds chirping to create her effect. But the work isn’t simply about peace on the Korean Peninsula. “This was the most-watched live TV event since the moon landing, and I was overwhelmed by it watching it in Berlin,” Yang said. “The moment that the camera was capturing and the moment I was watching it unfold were the same, but also different. It came to me like this momentous situation that transcended particular place and time.” 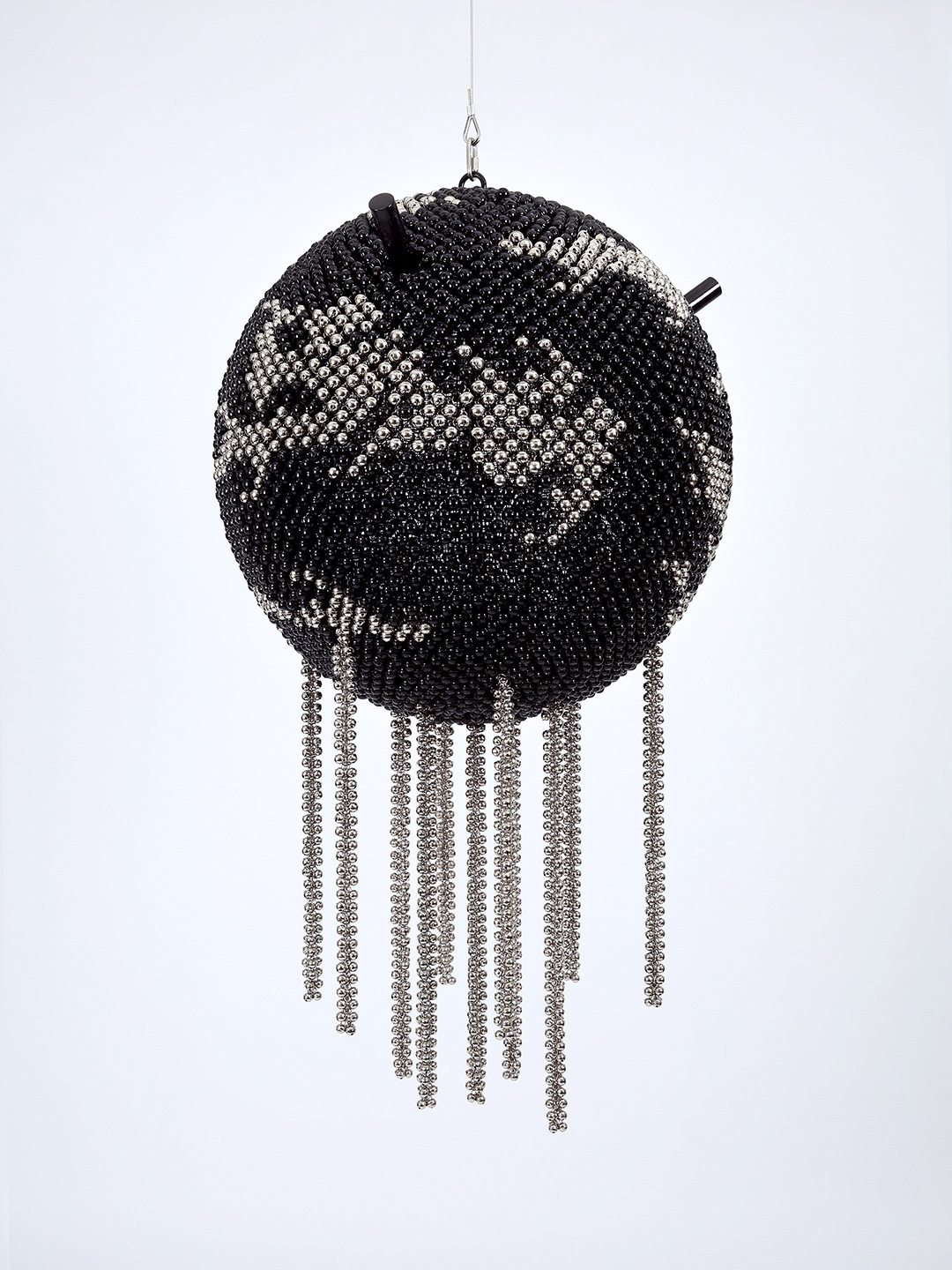 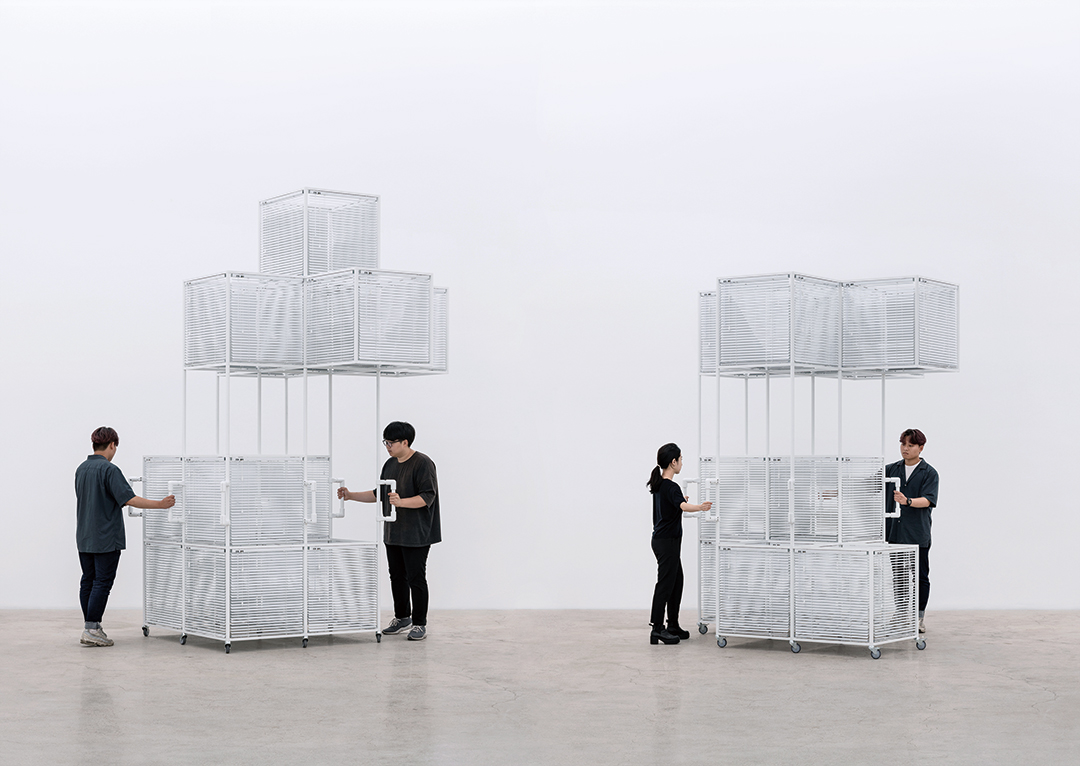 The abstract language unique to Yang – whereby she arranges and juxtaposes elements that don’t seem to go well together or that aren’t related with each other – is evident in this exhibition. ‘Incubation and Exhaustion’(2018), the wallpaper that enclose sounds and movements at the front of the gallery, was inspired by the Occitan region in France. Distinct features of the Provence region, where the pagan traditions and high-tech industries co-exist, are depicted in a collage. Interestingly, the mixture of all sorts of objects – Mexican peppers, German garlic, surgical robot, rainbow, lightning, bubble and cushion pact – doesn’t look out of place in Seoul. And this is where the universality of Yang, known as an eccentric thinker, shines through. ‘A Chronology of Conflated Dispersion – Duras and Yun’(2018) is a collection of texts that may be difficult to spot but must not be missed, for it enriches the context of the whole exhibition. After studying Korean composer Isang Yun and French author Marguerite Duras, Yang decided to crosscut chronologies of the two figures who are of different gender and different backgrounds and who have no historical connection. Yang discovered “connection that transpires when the artistic life and the historical life of an individual meet.’ And Yun and Duras, who never met each other, are brought together by Yang. 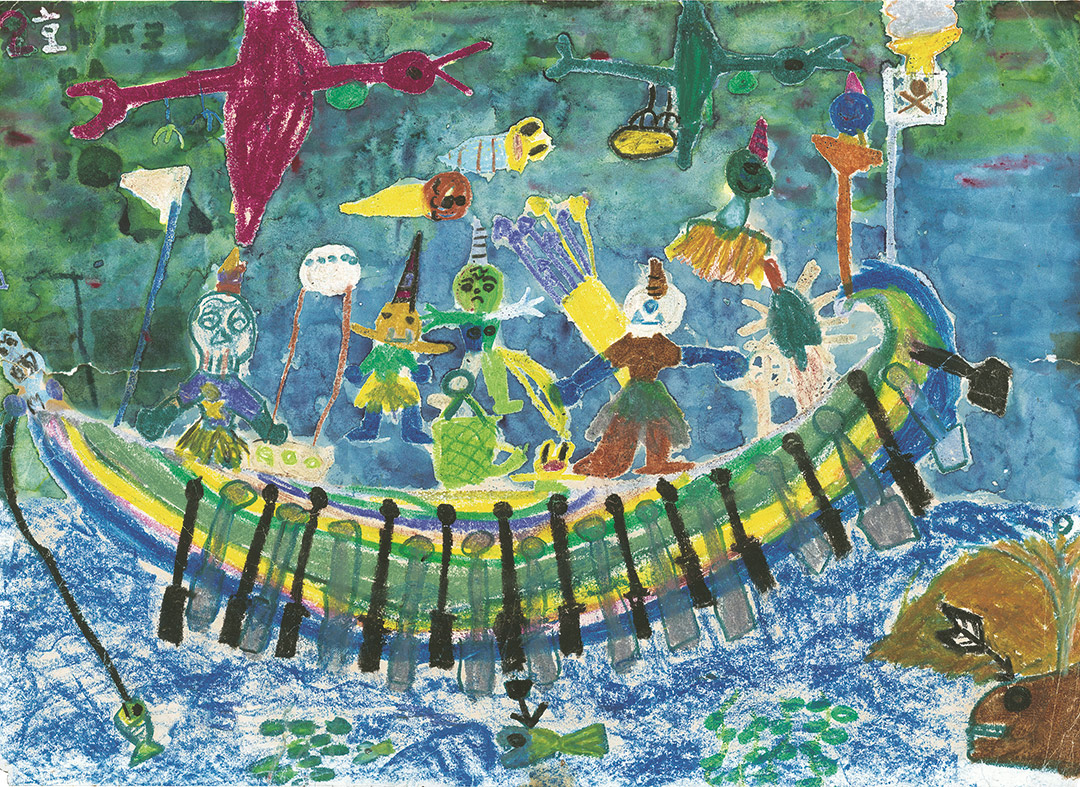 Where the song ‘AD 2000’ provided the auditory guidance to the exhibition, the painting ‘Treasure Ship’ offers the visual direction. Yang drew it with her younger siblings when she was six years old. Rather than the house, family or flowers, Yang drew archaeopteryxes and monsters with a horn. With a glimpse of her personal history, Yang delves into the primitive and mythical elements of ‘strange figures.’ Come to think of it, Yang has often magically traveled between the ancient times and the modern era. This is no different than thinking outside the box. Yang has made a career out of breaking down barriers between things that are supposed to be different and contrary to each other and things that are divided by the rest of the world as black and white. It’s also the essence of the ‘community’ that Yang dreams of. Yang herself said, “This exhibition is about how far Haegue Yang the artist has come, and offers a candid story about the reality of Haegue Yang."

※ “When the Year 2000 Comes,” Yang’s first exhibition in Korea in four years, will run through Nov. 17 at Kukje Gallery.