The Hermitage Cats
The Return of the Prodigal Son by Rembrandt is a masterpiece on display at the State Hermitage Museum in Russia. Guess who is guarding this precious oil painting? It’s none other than the royal cat guards with 250 years of history.
Cats Make a Landing in St. Petersburg
The Hermitage Museum in St. Petersburg, Russia, is one of the most beloved places among art fans across the globe. It’s a historic venue where some three million artworks are being exhibited. Interestingly, the museum has been relying on fluffy troops for the safety of its collection for well over two centuries. 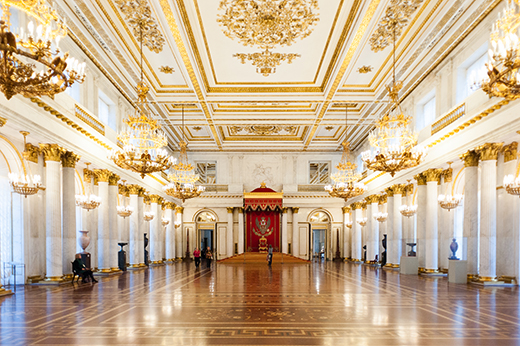 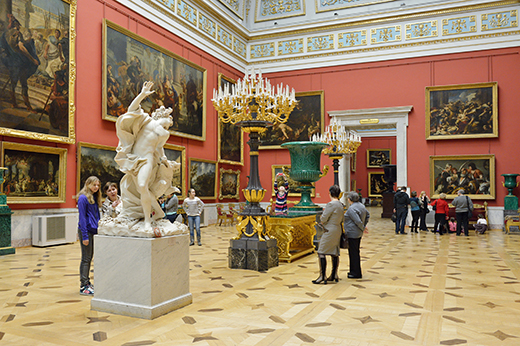 Art works on display at the Hermitage Museum © Shutterstock

In the early 1700s, what is now Russia’s northwestern territory belonged to Sweden. Peter the Great of Russia had an ambition to increase the nation’s naval presence and invaded a small fortress of Sweden along the Neva River, subsequently occupying it. The tsar planned to build a new city there by reclaiming the marshland as it was connected to the Baltic Sea. However, the plan presented a major obstacle due to the lack of stone in the area. A stone levy was placed on carts and boats passing the city to build foundations. That wasn’t enough either. In the end, even the bodies of those who had died in the process of city construction were thrown into the swamps. That’s how St. Petersburg got the eerie nickname of “a city built on bones.”
After the death of Peter the Great, his daughter Elizabeth Petrovna took the throne following a complicated power struggle. In 1754, architect Bartolomeo Rastrelli was ordered by the empress to rebuild the Winter Palace as the official residence for the imperial family. Catherine the Great, who came to power in 1762, had a detached palace built next to the Winter Palace and named it “Hermitage,” meaning a private abode. The empress used this space to showcase her collection of artworks and jewellery and opened it to foreign ambassadors to treat them. The palace served the purpose of showing the world the glory of Russia. The St. Petersburg palace at present is the result of reconstruction using bricks and stone, after it was destroyed in fires and wars over the course of history. Back in the 1700s, wood was the main foundation material. Sitting on what was once a wetland, the palace made of wood resulted in rat infestation. That is when Catherine the Great ordered to organize cat guards to prevent rats from damaging artworks. The tradition of feline employees has since become a legacy of the Hermitage Museum. 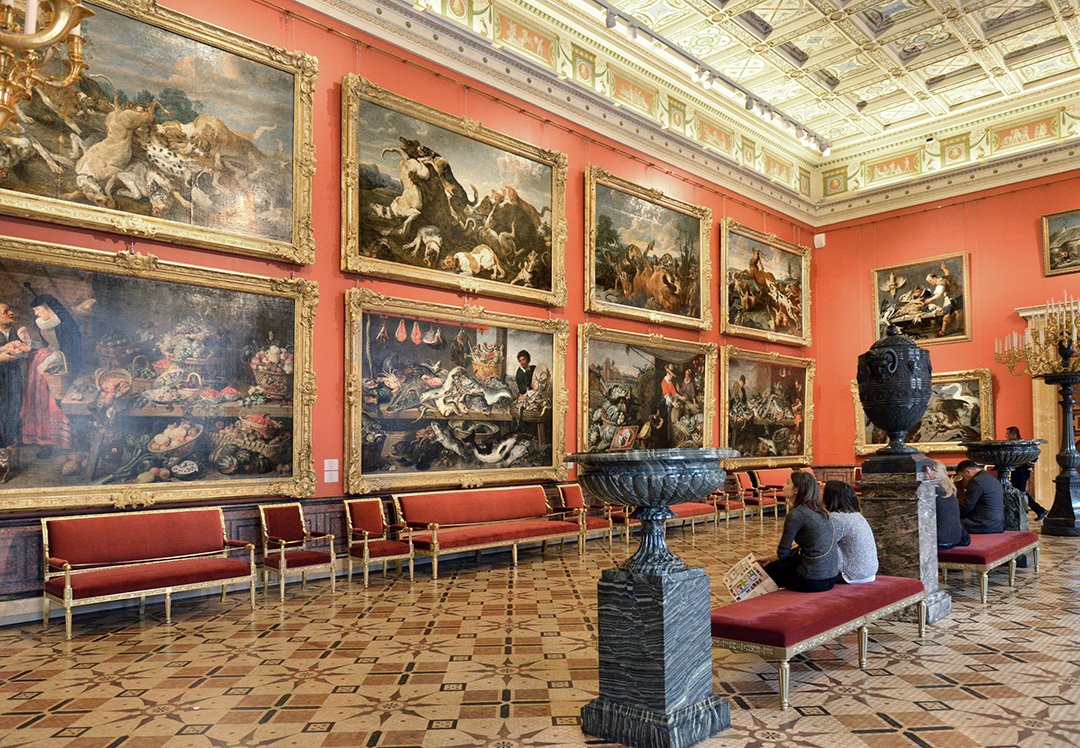 Visitors at the Hermitage Museum © Shutterstock

Palace Pet No. 1, Basil
According to the legend, it was Peter the Great, not Catherine II, who had brought a cat into St. Petersburg for the first time. Russians say the first cat guard at the Hermitage Museum was a cat named Basil, and the cat is believed to have been adopted by the emperor during his trip to the Netherlands. Some say the cat stayed with the young Peter since the time he began learning advanced shipbuilding skills at a shipyard in what was then Holland, while some say the emperor bought the cat from a Dutch merchant in 1724 right before his death. But the stories are just stories. The first documented record of a palace pet in St. Petersburg is from the Elizabethan regime. In 1745, Elizabeth of Russia ordered Kazan’s governor-general to send 30 cats, capable of catching mice, to her palace. Although it was before the completion of the Hermitage, it is meaningful as the first official record of a cat being raised in St. Petersburg. From that period on, royal cats have received special treatment along with strict health monitoring including neutering. As the newly-built city of St. Petersburg had a lot of wooden structures on a wetland, it was natural that cats became a necessity. As Catherine the Great, an enthusiastic art collector, took power, cats no longer just roamed the palace. They began roaming in official capacity, protecting the galleries. 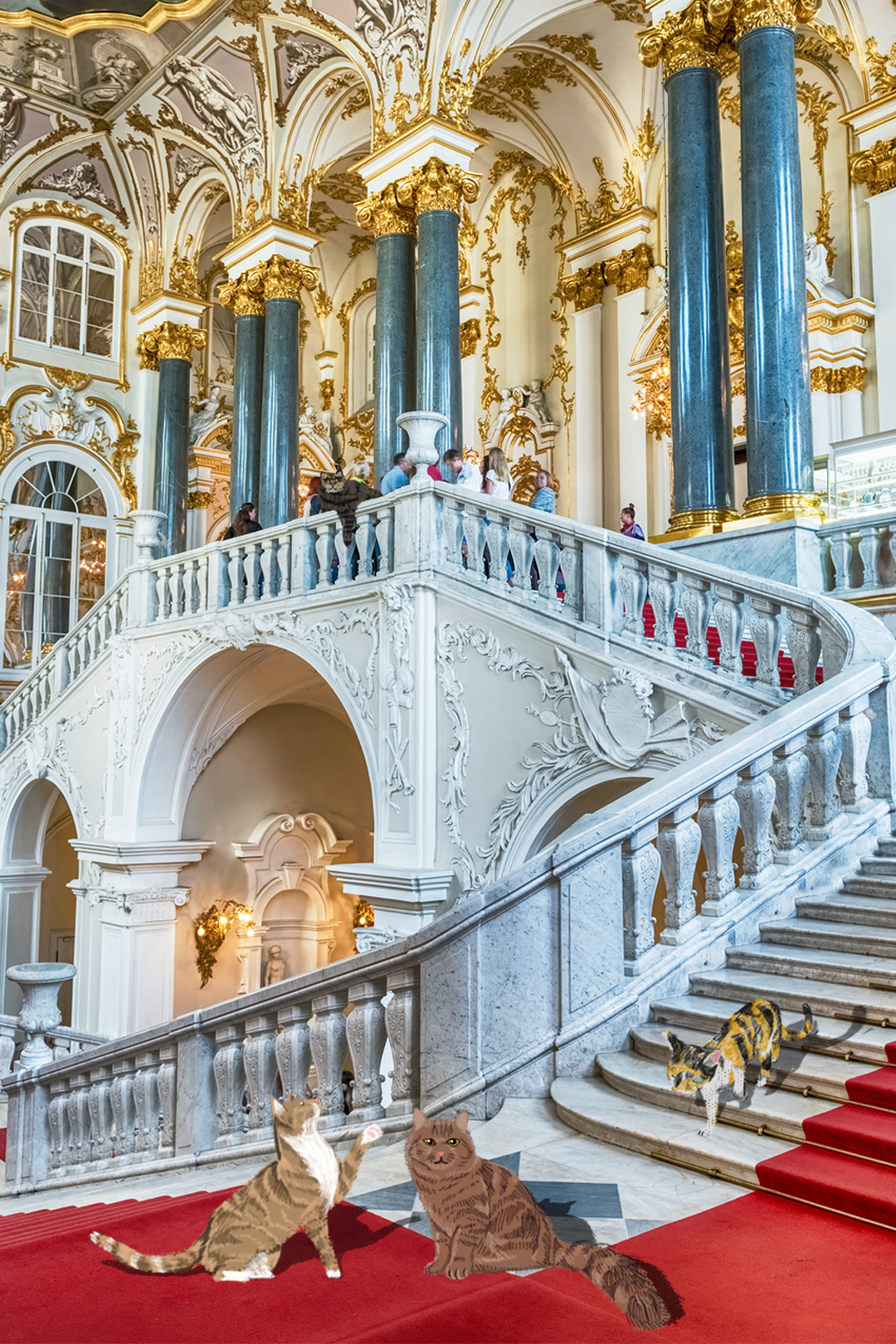 Cats standing guard at the museum

No Easy Life for Russian Cats
After the 1917 Russian Revolution, the Bolsheviks nationalized major palaces and high-end mansions, and turned them into museums open to the public. In and around St. Petersburg, the Winter Palace, Alexander Palace, Stroganov Palace, and Yusupov Palace became a museum.
In 1941, Germany broke the German-Soviet Nonaggression Pact, besieging Leningrad, former St. Petersburg. Three years of what’s known as the “siege of Leningrad” ensued. Trapped in the city, Russians survived on whatever food they could find. Tailed palace guards at the Winter Palace were no exception. For about 900 days, tens of thousands of people starved to death. The bigger problem was the infestation of rats following the disappearance of cats. The siege ruptured in 1944, but sanitation in the city was still a serious problem, as rats stole whatever crops and vegetables humans had left. An emergency supply of cats was made from a city 300 kilometers south of St. Petersburg. It was with the demise of Nazi Germany that Russian society started stabilizing.
In November 1945, the Hermitage Museum reopened its doors to the public. However, there were still rats to deal with. In the early 1950s, the Soviet government issued a general mobilization order for cats. Over 5,000 cats were transported to St. Petersburg from Siberia, which is several thousand kilometers away. Some of them were assigned to the Hermitage Museum as palace guards. St. Petersburg celebrated the victory of the Soviet Union in the war, erecting cat statues in various places of the city to symbolize glory, peace, and stability. Naturally after some time, cats became vermin. In the 1960s, as cats began roaming inside the gallery, where they were prohibited from entering, some voiced their opinion that the museum can be better protected with chemicals. However, a study found out that cats were more effective in terminating rat infestation than chemicals. So feline guards returned to the palace after a short retirement. They did not win back special treatment as before. Unlike the previous Imperial Russia regimes, the new government provided no health checkups or separate meals. 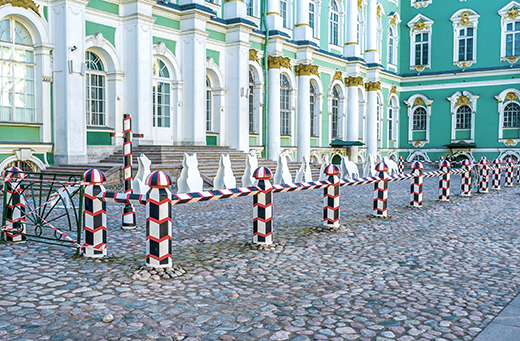 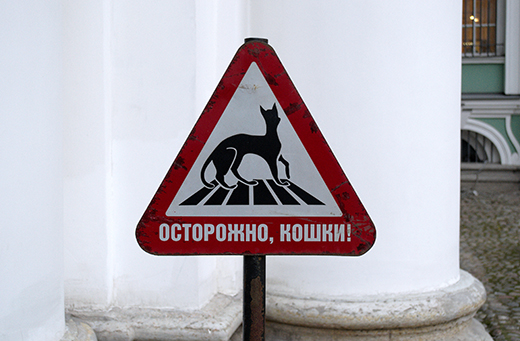 Signs showing cats at the museum

Popularity of Fluffy Guards at Its Peak
With the collapse of the Soviet regime in the early 1990s, almost all funding to the Hermitage Museum stopped. Mikhail Piotrovsky, a long-time director of the museum, said there was a time when they had no money to fix the roof. Maria Haltunen, who is now the museum’s press secretary for cats, found a bunch of malnourished cats in the basement of the gallery in 1995. She started a fundraising campaign asking people to donate one ruble for the palace cats to pay for cat food and medical expenses. Director Piotrovsky also supported her cause. He allowed the basement where hot water pipes run through to be used for cats.
As time passed, the wound from the bygone era slowly healed and St. Petersburg regained stability as the busiest city in Russia. Tourists from all over the world began flocking to the city and the Heritage Museum was no longer in financial trouble. The recovery brought back the traditional benefits for cat guards. It also involved the official acknowledgement that cats are part of the museum. Now they have ID cards and health notes for a more organized pet management.
As people freely visited the museum, more of them became attracted to the felines stretching and yawning on the bank of the Neva River. With the increased volume of visitors to the Hermitage, some would even seek St. Petersburg to meet the famous guards. Dutch artist Erik van Lieshout has received favorable reaction at various biennales when he released his video artwork on the Hermitage cat community, which he had observed for nine months while living with them in the basement of the museum. The soaring popularity of these animals prompted the museum to register the trademark of the “Hermitage Cats” collection featuring cat-related artworks of the Hermitage. Included in the collection are Bronze Statue of the Goddess Bastet from fifth-century-B.C. Egypt, Figurine of a Cat from 12th-century Iran, and a Japanese wood print from the mid-19th century. In addition, contemporary artist Eldar Zakirov created a series of oil paintings depicting cats in court costumes. On its online shopping mall, the museum currently sells various cat supplies as well as feline-themed office supplies and groceries. 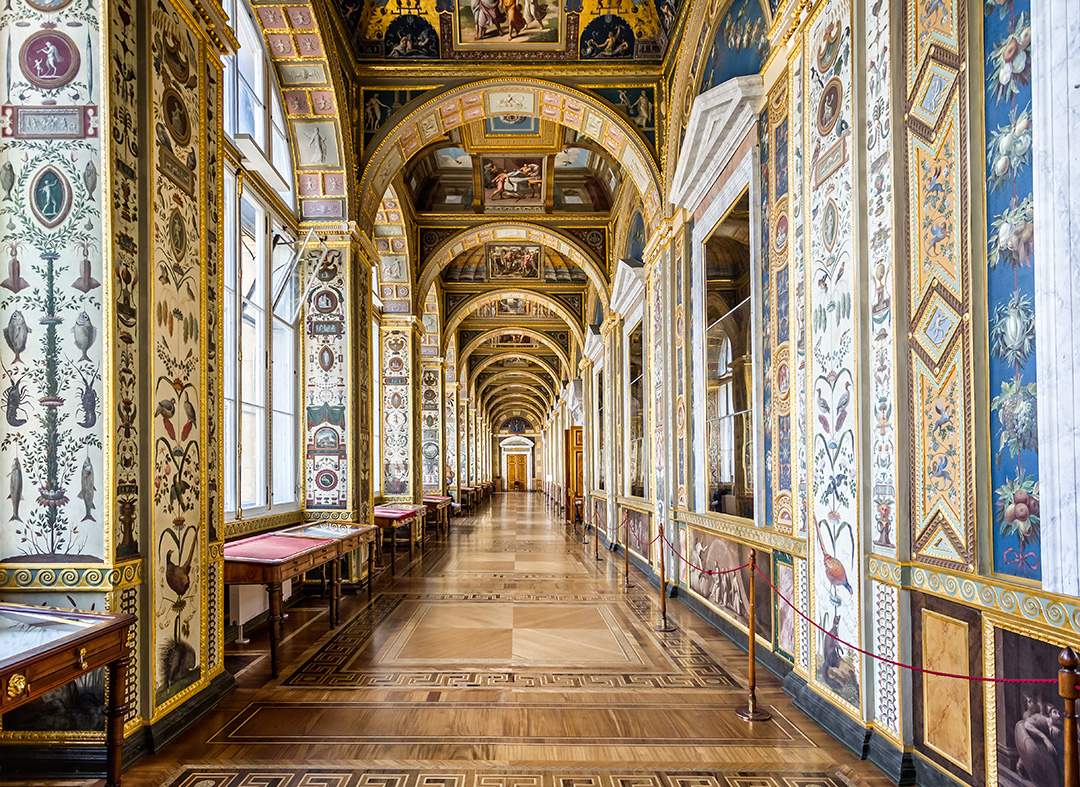 Inside of the Hermitage Museum

Mousers Preserving History
At present, the Hermitage Museum relies on 60-70 cats as palace guards. In 2014 when the Winter Palace marked 250 years since construction, the museum set up a plan to limit the number of feline force to 50. If the number goes over the limit, the cats were going to be put up for adoption. The plan is not yet successful. In fact, it’s not just in St. Petersburg that you can witness collaboration between a museum and cats. The British Museum, opened in 1759, also has an experience keeping cats to get rid of mice. Well before 1960, stray cats in London had infiltrated the basement of the museum, and started wreaking havoc in the 1970s as the number of cats went over 100. The British Museum, after careful consideration, decided to only keep six of the mousers in its basement and kick out the rest. Since then, the museum has had between four to seven cats at a time and after the 1990s the feline surveillance ended with the introduction of a new style of mice eradication. The first-ever privately-run museum in Beijing, Guanfu Museum, also garnered attention thanks to the six cats living in it. To read about them, you can find a translated version of a book about cats living in the Chinese museum. The Hermitage Museum, however, has the longest-running history of this unique human-feline relationship. Its effort to use cats as a link connecting the past and the present, and to embrace the contemporary life and culture as a form of art definitely deserves applause. It seems like the Hermitage cats will only get more popular and eye-catching. 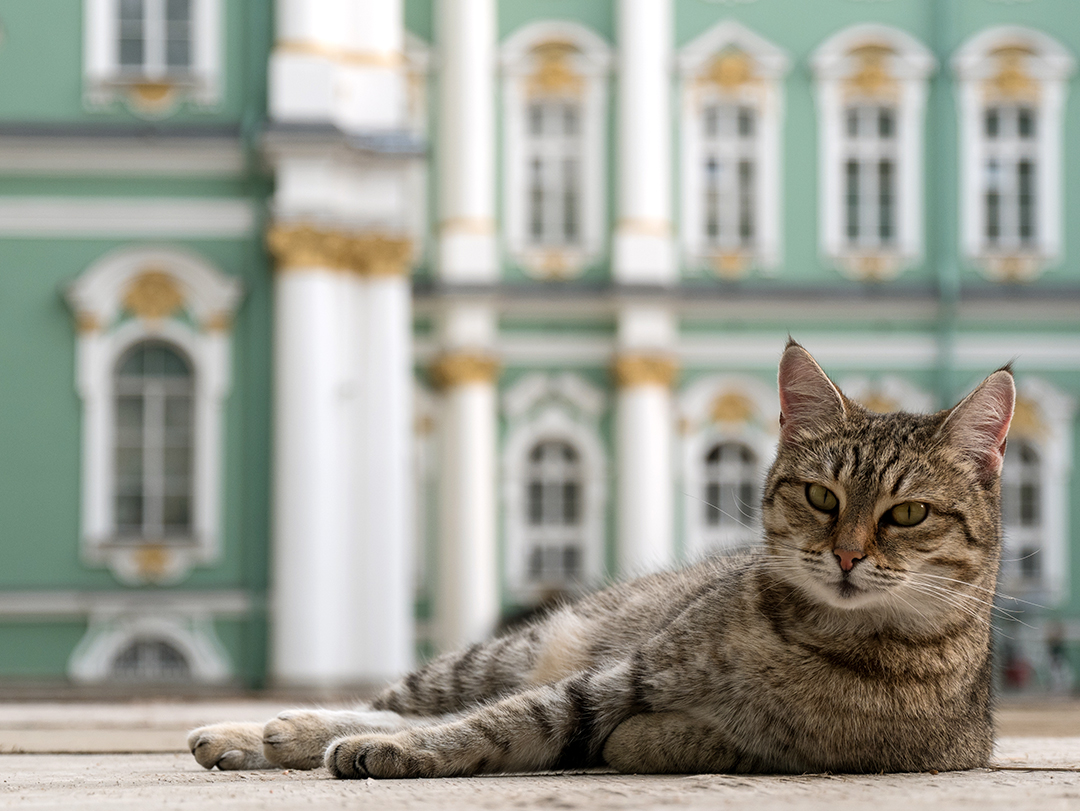 Where to Stay in St. Petersburg: LOTTE HOTEL ST. PETERSBURG 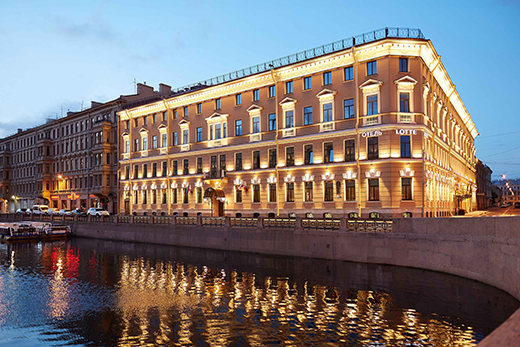 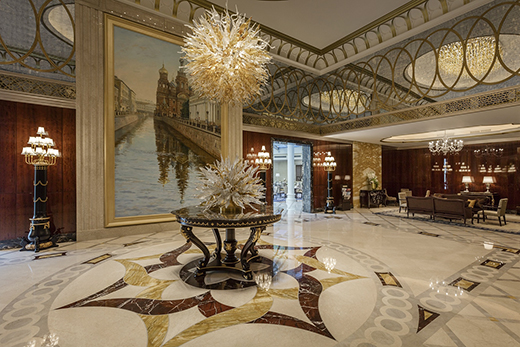 LOTTE HOTEL ST. PETERSBURG is located just across St. Isaac’s Square, the most famous venue in St. Petersburg. The hotel is housed in a remodeled historic building built in 1851. The main street of Nevsky Prospekt, Hermitage Museum and Mariinsky Theater all sit nearby. Inside the six-story hotel with a basement, a total of 150 guest rooms of 10 different types are available, as well as various restaurants and facilities.