Trip to Busan Spurred by BIFF
Come October, the City of Busan is filled with waves of films. The Busan International Film Festival, or BIFF, is one of the most prestigious film festivals in Asia. Here are what you shouldn’t miss at the 24th BIFF this year and what you can do for fun while staying in the port city.
Busan, City of Romance and Films
Korea’s No. 1 tourist destination Busan has one of the best nightscapes in the country thanks to the unexpected combination of ocean, mountains, and towering skyscrapers. Global travel media has given Busan the top spot on its “Best in Asia 2018” list. With Busan, the first thing that you imagine is the vast ocean to the south and the squawking sound of seagulls along with the grating voice of Busan ajime(married women in Korean dialect) repeating “Oiso! Boiso! Saiso!”(“Come! See! Buy!”) at Jagalchi Market. 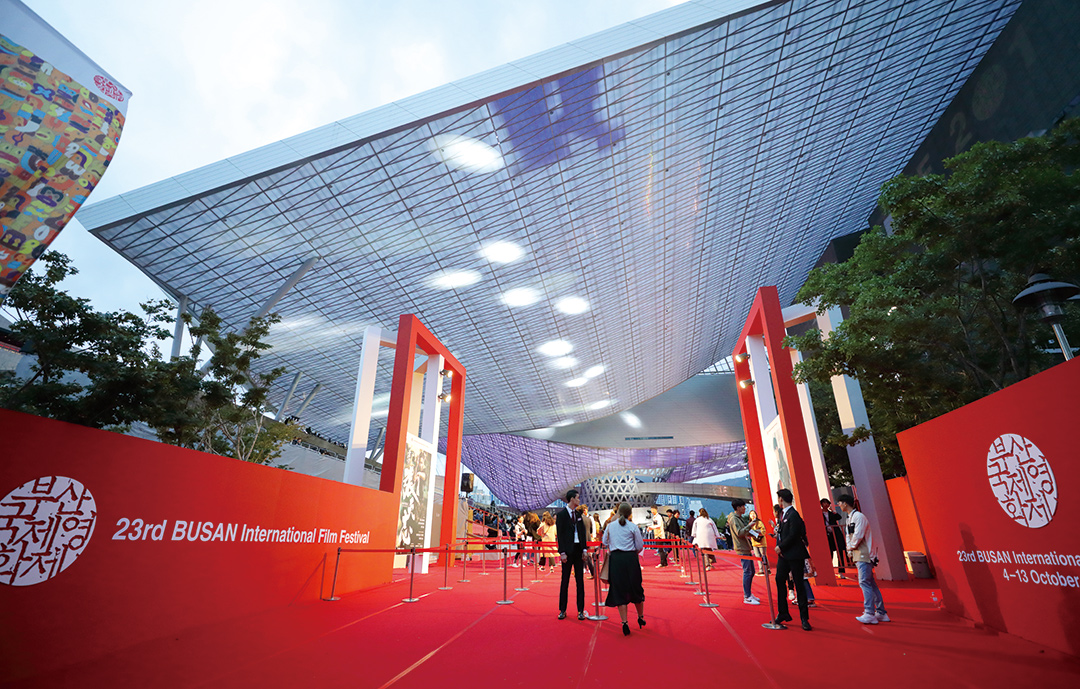 However, Busan has long been known as the city of art. Globally-acclaimed annual cultural festivals including the Busan Biennale, Busan International Dance Festival, and BIFF continue to inspire the city. Particularly the BIFF opening in the first week of October attracts movie fans and tourists not just from Korea but from the whole world.

Famous as the hometown of films, Busan bloomed before Seoul in the theater culture in the early 20th century, and housed 22 theaters during the Japanese colonial era, leading the Korean film industry. Although Seoul’s Chungmuro had once taken away the “hometown of films” title, Busan has regained the glory with the inauguration of BIFF at the end of the 20th century. Back then, it was called PIFF(Pusan International Film Festival), instead of BIFF. On September 13, 1996, the international film festival opened for the first time for the purpose of developing and promoting the Asian film industry and its prospective actors and writers that had been largely shadowed by the Western counterparts. The inaugural event recorded over 180,000 spectators and screened 169 invited films from 31 countries.

Since the early years, BIFF has on average attracted some 200,000 spectators from in and around Korea, growing to become one of the leading film festivals in Asia. Time magazine has chosen the 2014 BIFF as the “Best Film Festival in Asia” in its “Asia’s Best” special edition. 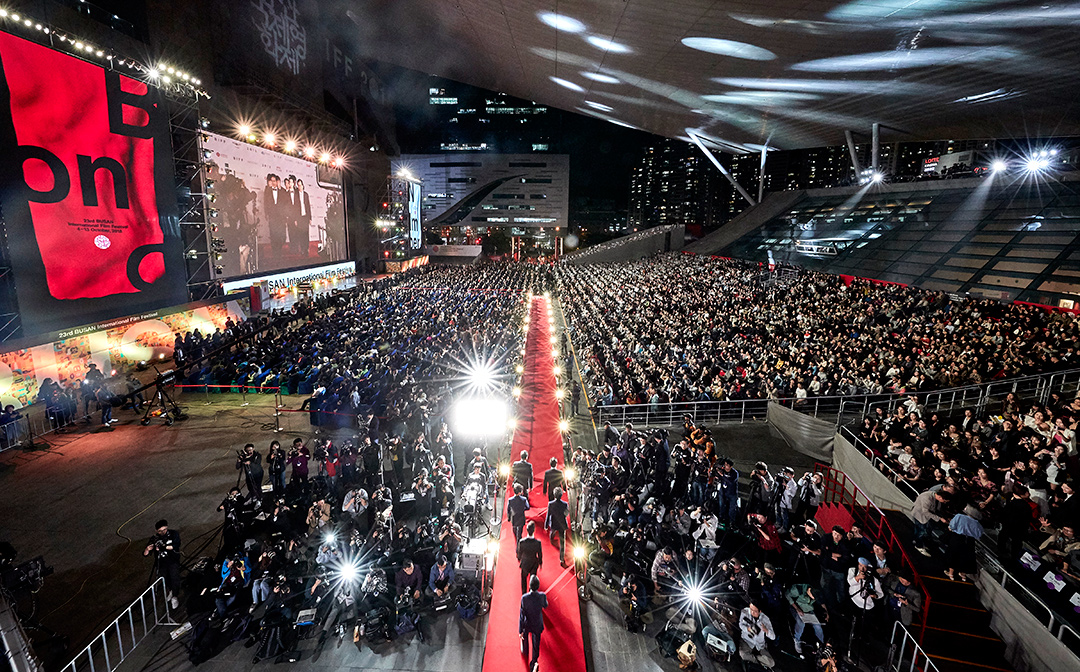 Films Invited From Largest Number of Countries
In this year’s 24th edition of BIFF, a total of 37 screens at six theaters including the Busan Cinema Center, Lotte Cinema Daeyeong, and Megabox Haeundae will be showing films during the opening days of October 3-12. The lineup includes 303 films from 85 countries, including 120 world premieres. The number of invited countries alone is the largest ever, this year.

For the opening and closing films, by Yerlan Nurmukhambetov from Kazakhstan and by Korean director Lim Dae-hyung have been chosen, respectively. is a classic Western-style film, telling a story of a family left behind after the father gets murdered by horse thieves on the way to the market to sell his horse. Last year’s winner of the Cannes best actress, Samal Yeslyamova stars in the film, and Aziz Zhambakiev, who won the Silver Berlin Bear for the camera at the 2013 Berlin International Film Festival, is in charge of cinematography. , the director’s second feature film, depicts reconciliation between a mother, played by actress Kim Hee-ae, and a daughter. Expectations are high on these two films as both directors have each won BIFF’s New Currents Award in the Asian film competition category. 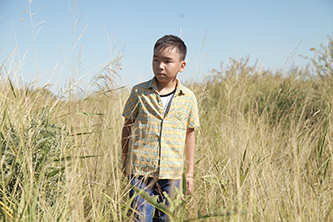 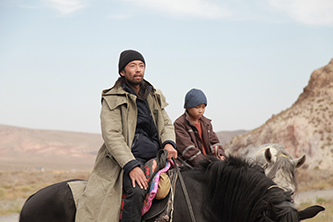 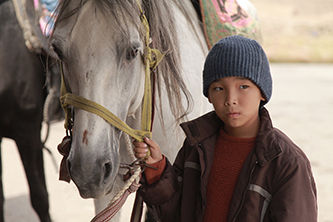 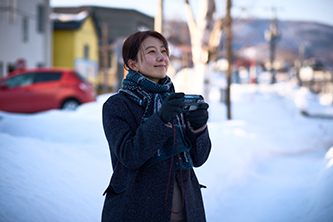 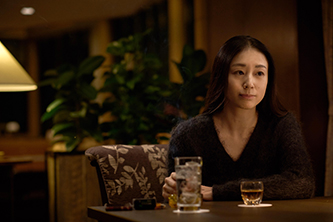 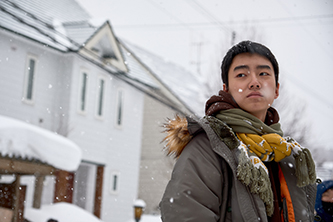 This year marks 100 years in the history of Korean cinema, with various exhibitions and events planned for commemoration. BIFF has also prepared a special program entitled “The 100 Year History of Korean Cinema, 10 Great Korean Films.” Some of Korea’s monumental films such as by Kim Ki-young, by Lee Jang-ho, and by Bong Joon-ho will be featured. Seven of the 10 films will be screened at Busan Citizens Park to make it easy for Busan residents to participate in the event. For your information, BIFF Village on Haeundae Beach where filmmakers, actors, and movie fans could greet each other will remain closed. Due to repeated typhoon damages and complaints from the festival sponsors, BIFF organizers decided to move the Village events such as “Open Talk” and “Hand Printing” to the Busan Cinema Center. 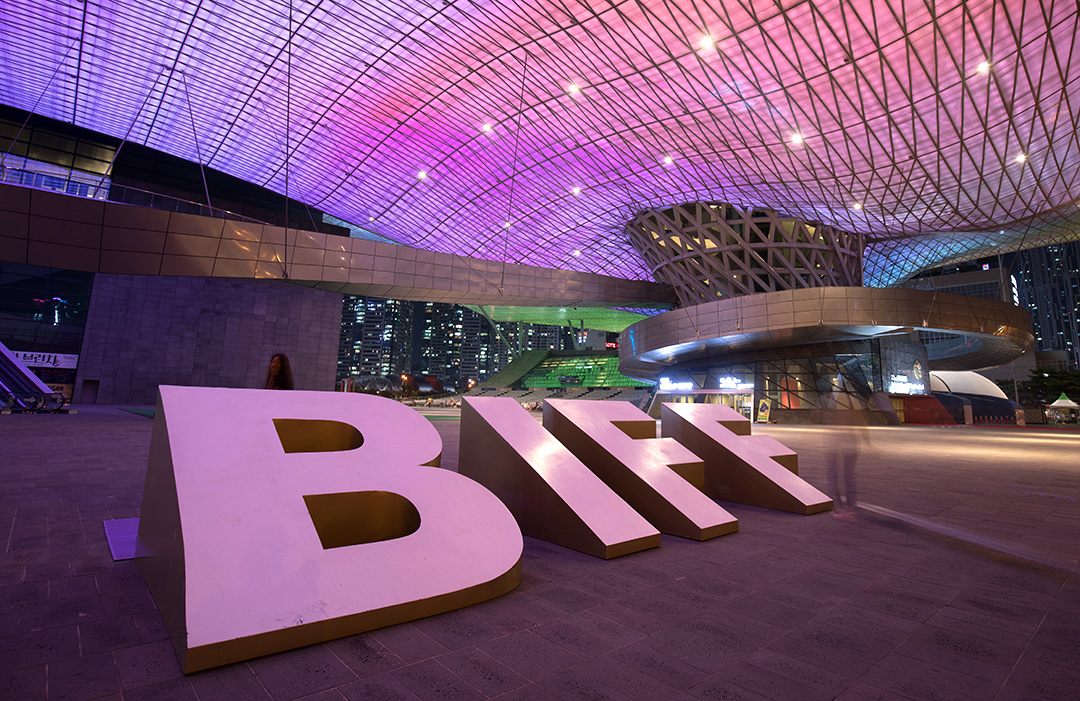 So Much More Than Just BIFF
The beginning of October when BIFF kickstarts is also the start of the real autumn in Busan. Tourist spots in the city will be filled with attractions and entertainments. There is no place like Orangdae Park to watch the sunrise at the day’s beginning. Orangdae is an ecological park located on the coast in Gijang District, Busan. The blue ocean is right in front of you, and you may take a few steps to find the small Buddhist temple of Haegwangsa and a shrine hall called Yongwang-dang surrounded by jagged rock outcroppings and the legendary Wonangdae rock. Photographers love this area.

There are many traditional markets full of unique characteristics in Busan. Gukje Market became even more famous after the release of the same-title Korean movie. Bupyeong Kkangtong Market is a night market equipped with food items from all over the world. Bujeon Market is a huge indoor/outdoor marketplace close to Seomyeon. Gupo Market opens every five days following the tradition that began during the Joseon Dynasty in the same area. Jagalchi Market is well known as a seafood heaven. Some people say the top three would be Jagalchi, Gukje, and Bupyeong Kkangtong markets. Others say Bujeon, Jagalchi, and Gupo markets. Whichever market wins the honor, they all have characteristics and, more importantly, delicious food. If you walk to the top of Jagalchi Market, there’s a lookout giving a panoramic view of the southern coast and Yongdusan Park. 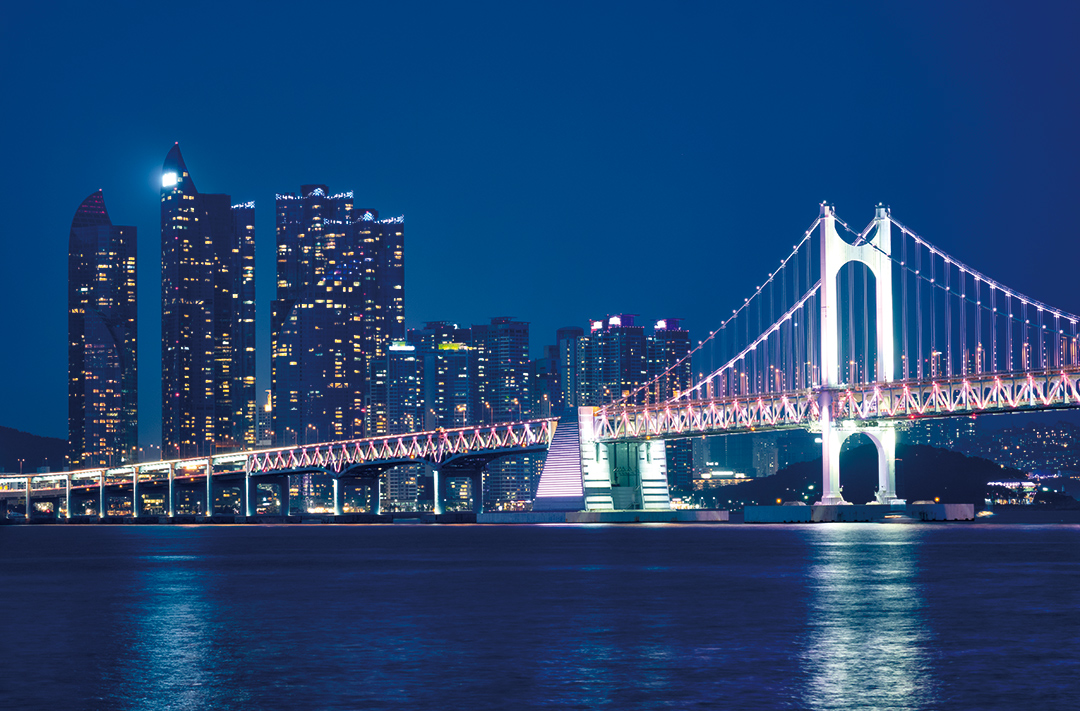 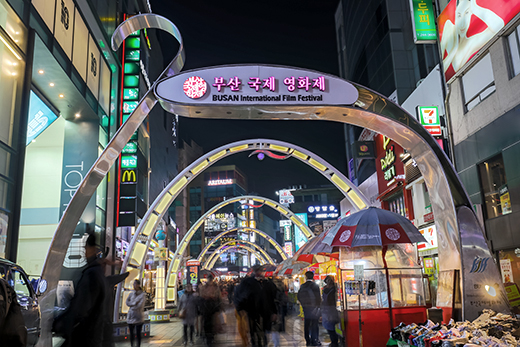 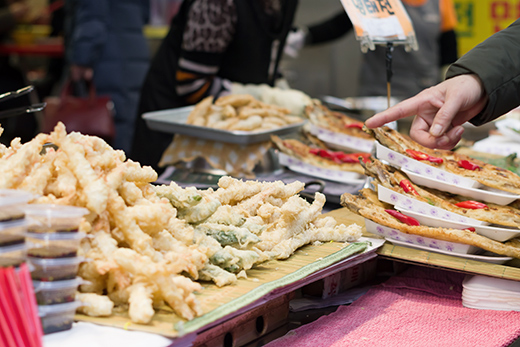 For those who wish to trace back the history of BIFF, there is BIFF Square in Nampo-dong, Jung District. BIFF Square is the place of origin for the 24-year-old film festival. It’s also where Busan’s film culture started forming. The old Busan Cinema is now a multiplex, but the lot is still there, symbolizing Busan’s local theater history. The square is a great place to find a variety of restaurants and when the night falls, the streets lined with pojangmacha(snack carts) near the Lotte Department Store and the equally famous Nampo-dong pojangmacha street stay lit until the small hours, fueling the festive atmosphere of the city.

The fun in attending BIFF does not just come from the films. You gain fresh perspectives and inspirations as you absorb the unique atmosphere of Busan and surround yourself with passionate fans and moviemakers at BIFF. Soaked in the sound of waves and movies, you won’t be able to tell how time passes. That’s the beauty and romance of Busan at this time of the year.
Busan Must-Sees Recommended by Filmmakers 1
Bok Woon-suk, Director of the movie
1 Gamcheon Culture Village
If I were to recommend a place in Busan to visit after watching a movie in Busan, my first choice would be Gamcheon Culture Village. Walking up the cozy alleyway, you can get a view of the downtown, and that’s refreshing.
2 Yeongdo District
The gateway to Yeongdo, the island of Busan, is Yeongdo-daegyo. Busan, seen from above the bridge, is dynamic. The waters around Busan seen from the Bongnaesan Dulle-gil Trail is breathtaking and mysterious. At Taejongdae, including Sinseondae, you can enjoy the autumn of Busan to your heart’s content. 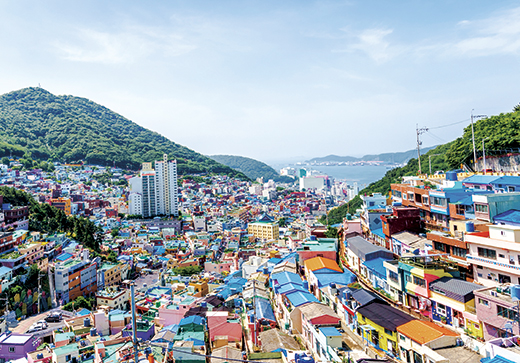 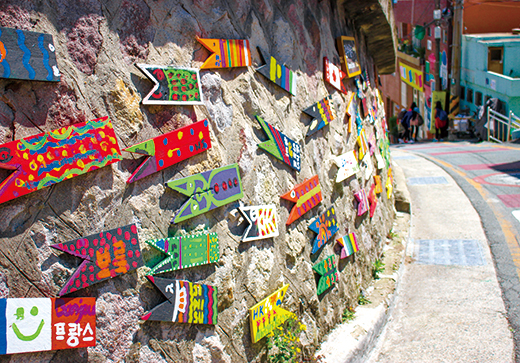 Busan Must-Sees Recommended by Filmmakers 2
Park Byeong-hun, BIFF Publicist
1 Cheongsapo Daritdol Observatory
If you want to see the ocean but do not want the crowd of Gwangalli and Haeundae, I recommend you visit Cheongsapo Daritdol Observatory. It’s relatively empty, giving you plenty of time to enjoy the view. It’s easily accessible, too, as you can get there by taking a village bus from Megabox Haeundae(Jangsan), which is one of BIFF screening theaters. There are many ocean-view cafes around the observatory.
2 Busan Museum of Art
Busan is a cultural mecca with a diverse art infrastructure covering film, art, and music. The Busan Museum of Art is within 15 minutes of the Centum City, where BIFF is held, on foot. During the festival, the museum will hold three exhibitions including . 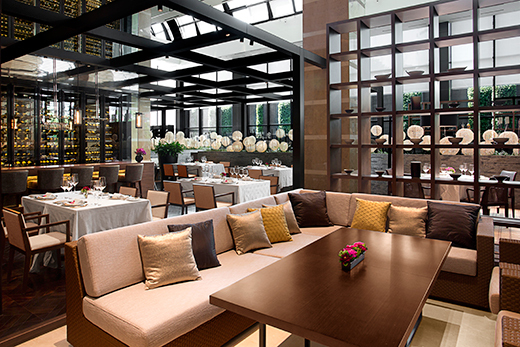 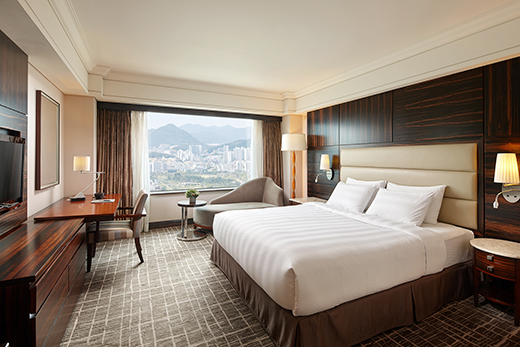 Where to Stay in Busan: LOTTE HOTEL BUSAN
LOTTE HOTEL BUSAN is a five-star luxury hotel in a skyscraper. From Busan Station, it takes 15 minutes by car. From Seomyeon Station on Busan Subway Line No. 1, it’s a walking distance. The hotel has a total of 650 guest rooms that are designed in a modern, elegant style. It’s also equipped with 11 banquet halls with the latest interpretation equipment and state-of-the-art audio & video system. There are a foreigners-only casino, an exotic dome pool and LOTTE Duty Free Shops. LOTTE HOTEL BUSAN has ranked No. 1 for eight consecutive years in the hotel category of the Premium Brand Index(KS-PBI) hosted by the Korean Standards Association. It has also received the “Traveler’s Choice” award given by the world’s largest travel platform, TripAdvisor, for four straight years.
Address 772 Gaya-daero, Busanjin-gu, Busan
Phone +82-51-810-1000
Homepage www.lottehotel.com/busan-hotel