Jeju Island by Yoo Dong-ryong
Following the footsteps of an architect named Jun Itami soon leads to Jeju Island.
The diversity of buildings in Jeju Island runs the whole gamut. Among many places that visitors to Jeju frequent, the structures designed by architect Jun Itami stand out, in particular, for their resemblance to the island itself. Its wind, stone, crest line, water, fog, and layers and layers of old customs, to pick a few. Jun Itami’s spaces form a perfect harmony with the wind, stone, crest line, water, and fog of Jeju Island, making one wonder if they have been there from the very beginning, however long ago it may be. 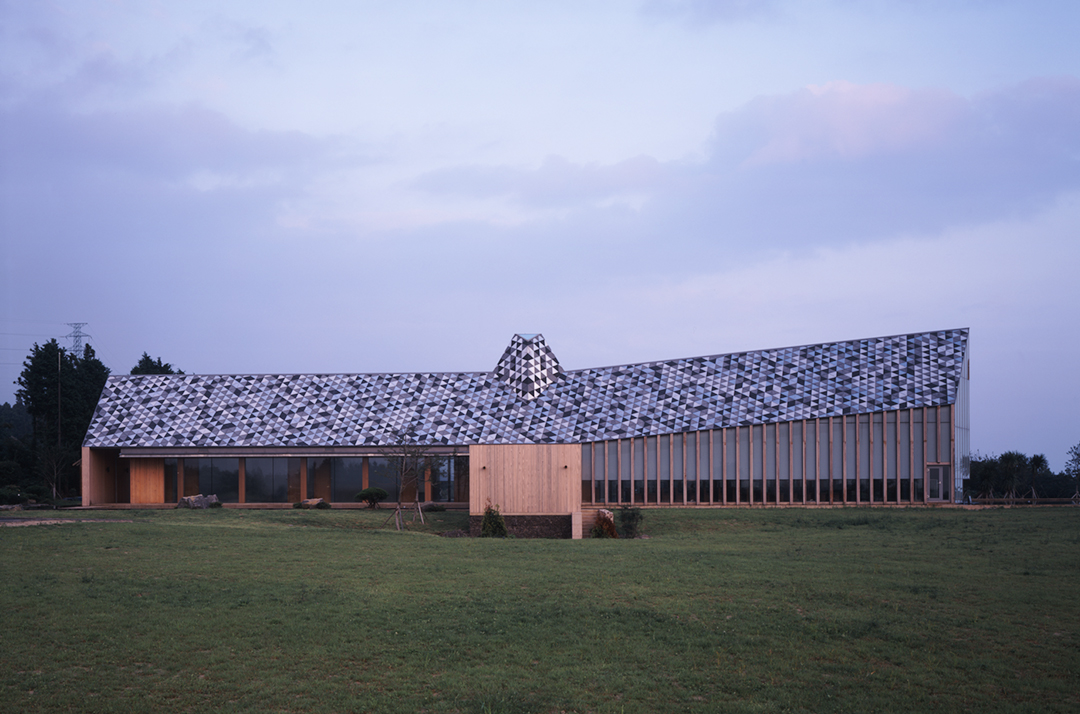 The Church of Sky, resembling the shape of an ark © SATO Shinichi 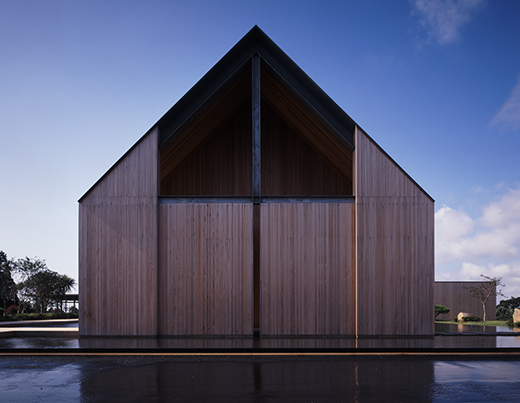 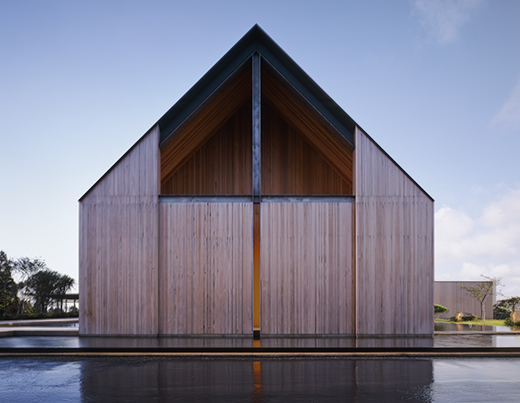 When the light shines through, the church becomes an ark of different sort © SATO Shinichi

Nature Faithful to Being Natural
Jun Itami. His real name was Yoo Dong-ryong. Born in 1937 in Tokyo, Yoo belonged to a Korean family who had moved to Japan from Geochang, South Gyeongsang Province. His family clan was Musong Yoo. Despite a deep-rooted discrimination that would have been far worse than a mere inconvenience, he kept his real name, living his entire life as Korean Yoo Dong-ryong. Jun Itami, a name better known to us, is his pen name. He took “Itami” from the name of Osaka International Airport, connecting Japan to the rest of the world, and “Jun” from the Japanese name of Korean pop music composer Gil Ok-yoon, a close friend of his from his youth. 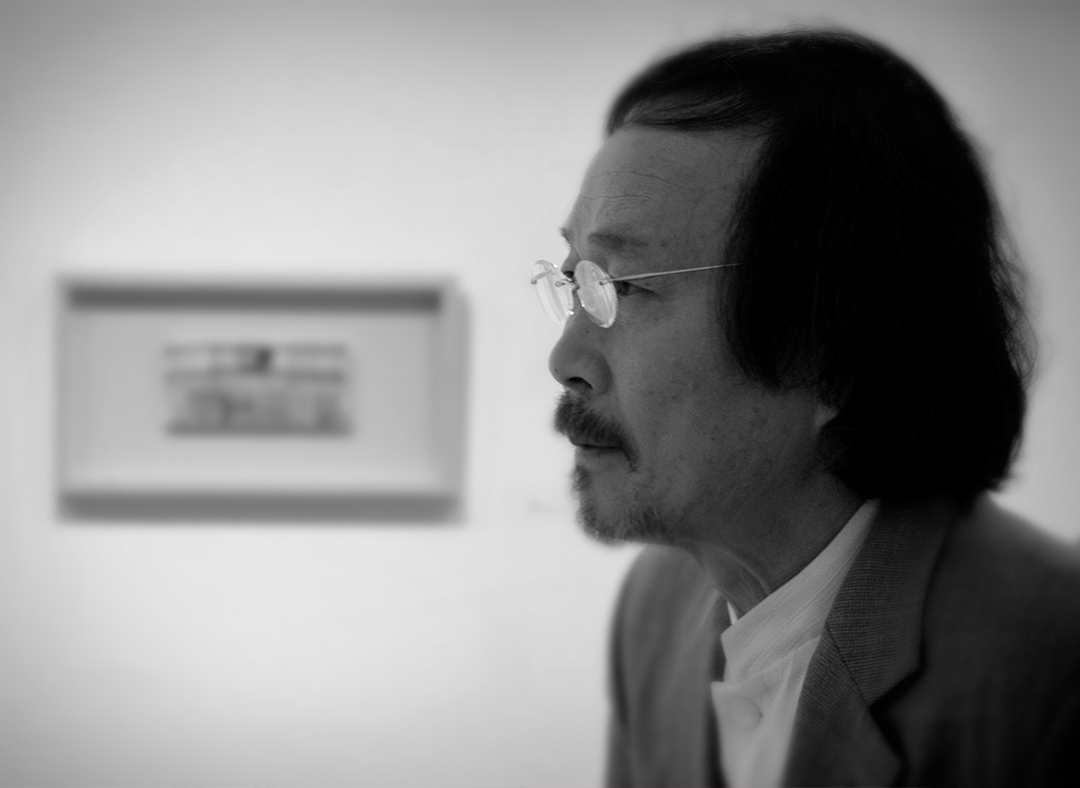 Jun Itami saw architecture with sentimental eyes. He was faithful to the essence of architecture which is to build a space where humans live in harmony with nature. He believed that a human being can only be humble in front of nature and that the space where a person resides or functions should resemble nature itself. He wanted to align the process and action of building with that perspective. Rather than being sensitive to trends, he was susceptible to the flow and balance in nature.
Itami took a keen interest in the properties of materials representing his architectural philosophy. That was why, instead of using trendy materials, he chose somewhat raw, yet weighty textures and elements. He was certain that the architecture (embracing such a perspective and philosophy) would last long. He held his solo exhibition entitled “Itami Jun, un architecte coréen au Japon” at Musée Guimet in France for the first time as an architect. He has received numerous awards including the 2005 Chevalier(Order of Arts and Letters, France), the 2006 Kim Soo-geun Prize, and the 2010 Murano Togo Award(Japan) for the first time as a non-Japanese citizen. These feats were proof that his philosophy and vision were recognized by the global community. 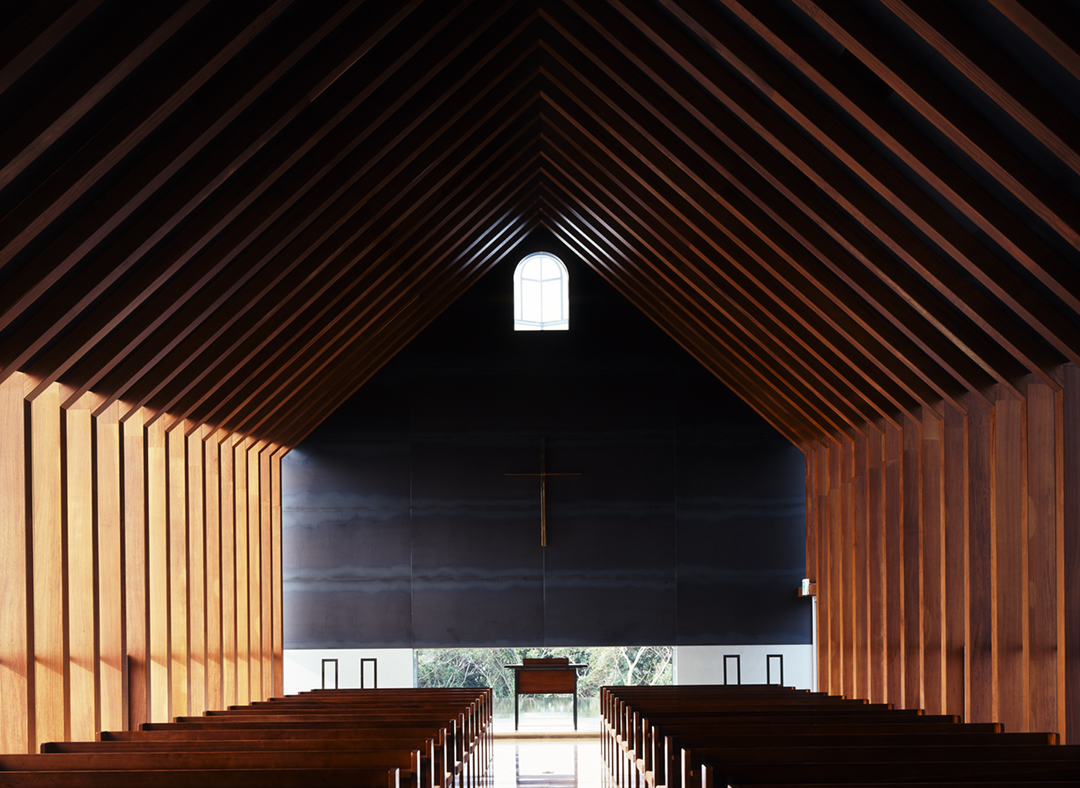 Inside the Church of Sky © SATO Shinichi

“I think about how to extract essence from the context of climate, landscape, and region, and have it permeate architecture.”
Jun Itami, the book “Traces of Hands”
His Vestiges in Jeju
Jun Itami had to constantly travel back and forth between Korea and Japan for his work, but found Jeju Island most appealing. Those who asked Itami to design their buildings knew that his architecture built in accordance with his principle would go beautifully with the exceptional, stunning sceneries of Jeju. That’s why Jeju Island is now home to quite a few Jun Itami buildings.
To name a few, there are the Church of Sky(2009), Duson Museum(2007), PODO Hotel, and Three Art Museums Water, Wind, and Stone(2006). 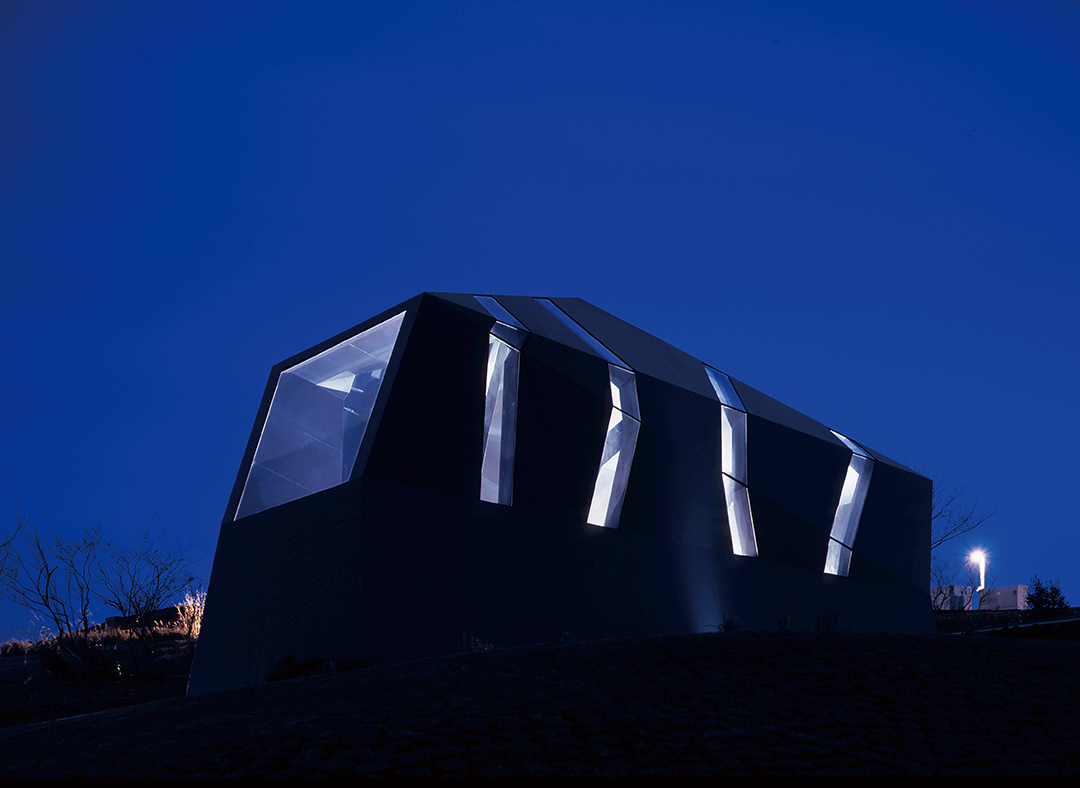 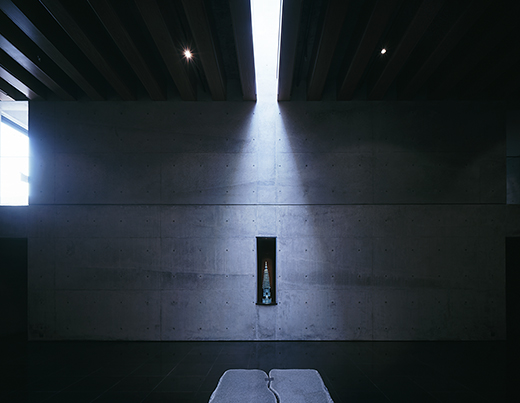 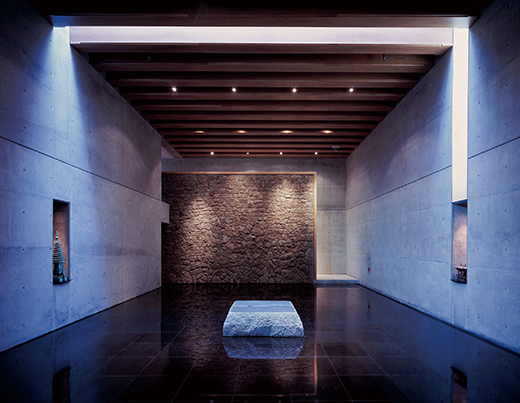 The Three Art Museums, said to have been discussed for the first time while Itami was drinking with the property owner, embraces nature itself as an art. The separate buildings have no art exhibited in them, but symbolize nature in themselves, having been constructed with the materials original to Jeju Island.
The Water Museum literally contains water inside the building. The ceiling has a giant oval hole and the water inside the building directly reflects what the sky shows. All of it can be admired while sitting on a stone objet d’art made by Jun Itami. 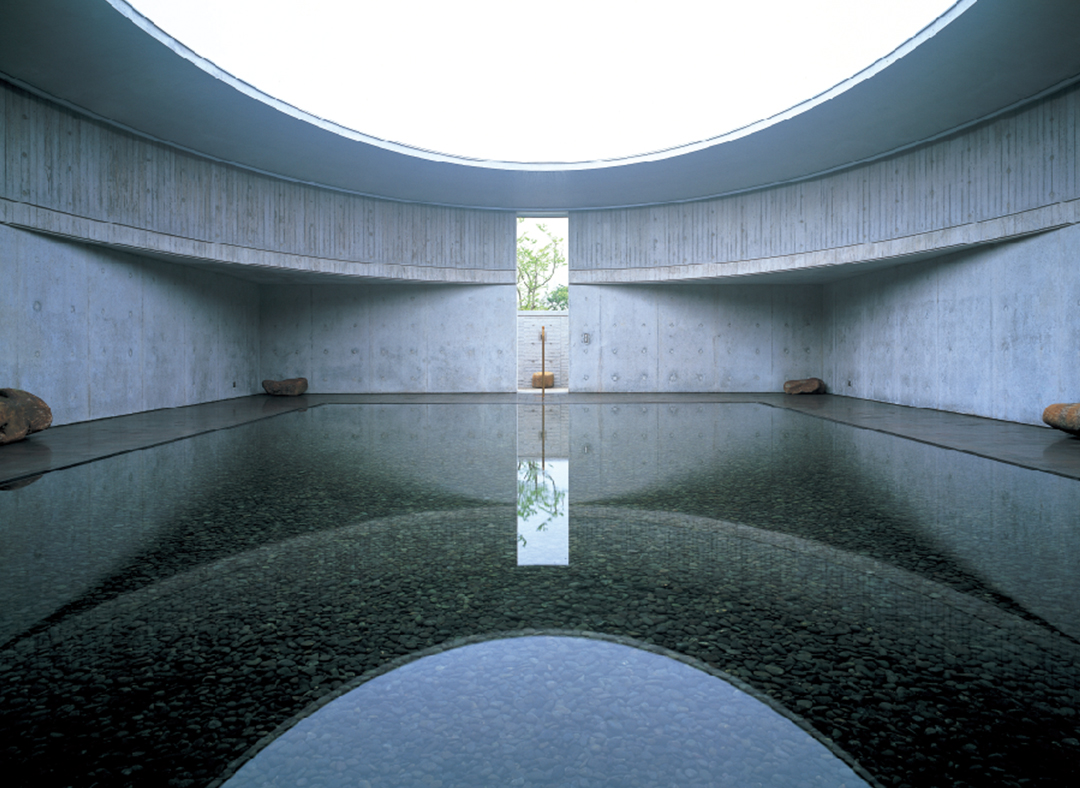 The Water Museum, exuding the tranquility of the quiet surface of water © SATO Shinichi

“A great architecture is a compressed music and the balance between light and shadow.”
Jun Itami

Listen to Song of Wind
At the Museum of Wind, spectators can vividly feel the wind of Jeju. The building’s designed to allow the wind to blow through the wood sidings making up the long hall, a space where one can listen to the sound of the wind in serenity. It’s the museum where the wind is heard and felt, so to speak. The Stone Museum is a rusty metal pane structure with a rock inside. The rock reflects the light shone through a hole in the ceiling and shows the changes in reflection as time goes by. In a way, the museum offers a chance to experience the time of nature that is constantly moving. A Japanese architect by the name of Kengo Kuma once said of Jun Itami that he “has an excellent eye to see diverse lights in the shadow.” The Stone Museum is an example of that. 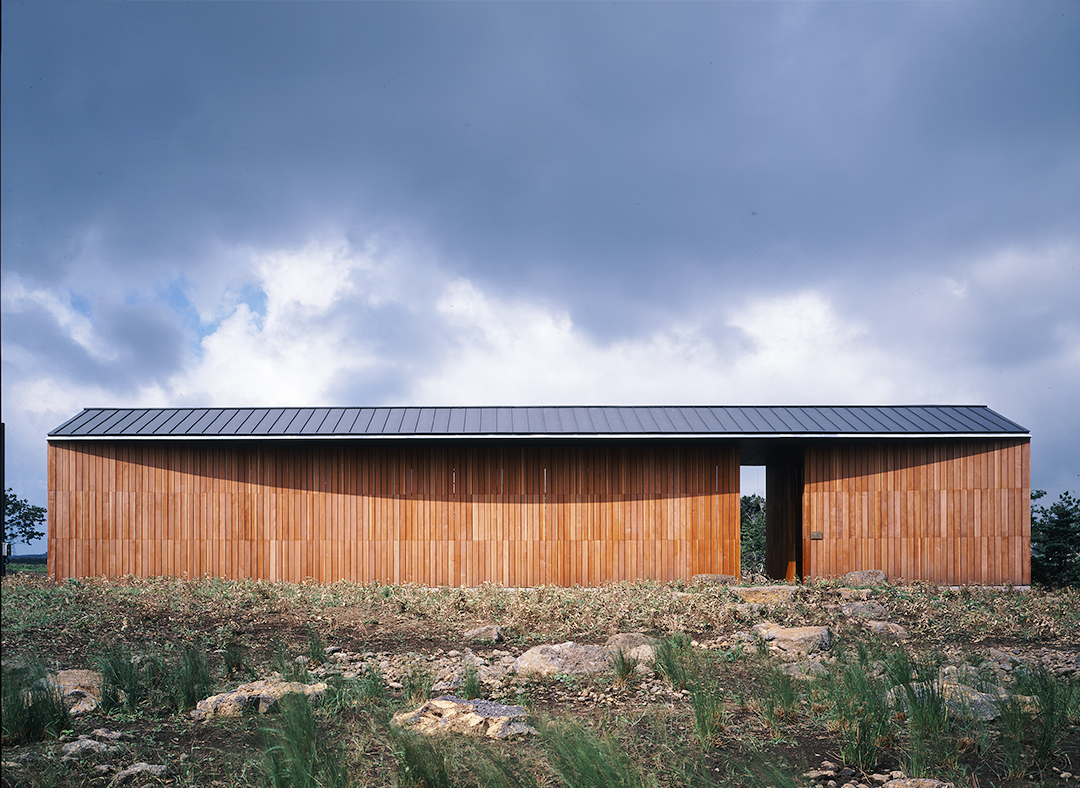 The Wind Museum, where you can hear the sound of the wind through wood sidings © SATO Shinichi

The Church of Sky is called Bangju Church in Korean. “Bangju” means ark and the Christian construction resembles Noah’s Ark, featuring a rectangular building topped with a gable roof. The pool surrounding the church has stepping stones on the side. They function as a gateway to the sacred ark, one might imagine. Architectural critic Lee Ju-yeon has commented on how “the light bouncing off the zinc-tiled roof of the building creates a sensation that the church is embracing the whole area.”

The exterior of the Stone Museum © SATO Shinichi

Meaning of Architecture
Japanese architect Shigeru Ban was close to Jun Itami living in the same neighborhood. Ban emphasizes the meaning of social behaviors by architects. In fact, he insists that there are things an architect must do for society. His building of affordable, yet sturdy structures using paper materials are the result of such beliefs. The meaning of architecture, defined by Jun Itami, was in creating a naturally-balanced structure that does not interfere with the view of nature and of humans. The natural balance among the elements of wind, light, and stone.
Jeju Island has an array of architecture by Jun Itami that have achieved just that. It’s Jeju by Yoo Dong-ryong.
Where to Stay in Jeju Island: LOTTE HOTEL JEJU 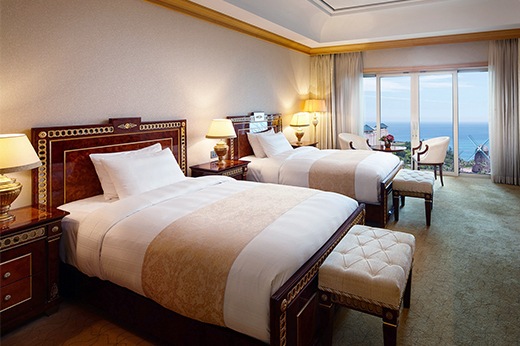 Located in the Jungmun Complex, LOTTE HOTEL JEJU is a resort hotel equipped with 500 guest rooms. Modeled after Sun City in South Africa, the five-star hotel embraces the natural environment and scenery of Jeju in their entirety. A total of eight restaurants and lounges are being operated, and the He:on Spa & Garden, the all-season outdoor spa pool, is a favorite hotel facility for family travelers.