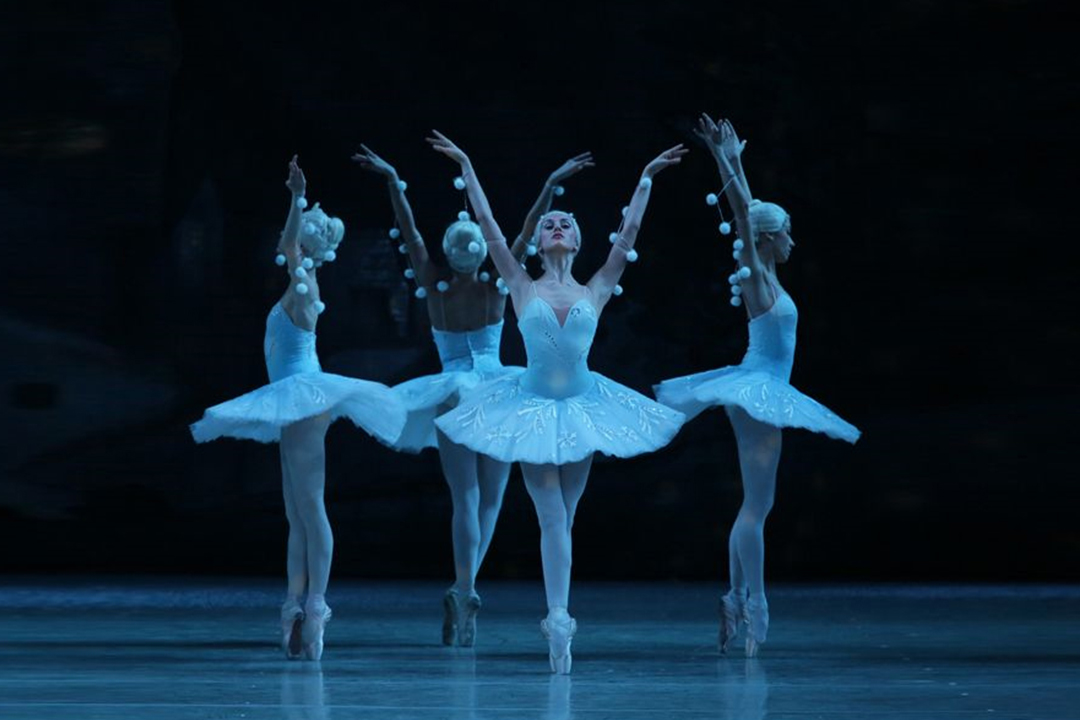 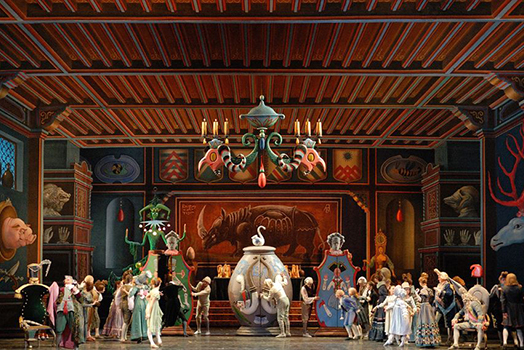 Magic Gifted by Drosselmeyer
“The Nutcracker” begins with a girl named Clara receiving a wooden nutcracker for Christmas from her godfather Drosselmeyer. That night, Clara helps the nutcracker to win the battle against the Mouse King, and follows the nutcracker-turned-prince to the Land of Sweets. The original work of this fantastic ballet is “The Nutcracker and the Mouse King” published in 1816 by German author E. T. A. Hoffmann. In the story, Drosselmeyer is a high court justice who likes to make things with his hands. He’s described as a mysterious figure who often brings children unique gifts. In a sense, the Drosselmeyer character reflects the story of Hoffmann himself. He studied law and worked as a lawyer like his father, despite his wish to become a musician. He led a double life, composing, writing, or drawing at night. Like Drosselmeyer, Hoffmann enjoyed crafting toys for his friend’s children and telling them stories. “The Nutcracker and the Mouse King” was also written for these children, after whom his characters, Marie(Clara in the ballet adaptation) and Fritz, were named.

Interestingly, the life of Tchaikovsky who composed the score for the ballet production strangely overlaps with that of Hoffmann. Tchaikovsky also studied law and held a public position while he passionately studied composition at Saint Petersburg Conservatory. Differently from Hoffmann, however, Tchaikosvky quit his government job after four years, choosing to pursue a musical career only. He was affectionate to his nephews and nieces. Being homosexual, he did not have a child but loved the children of his sister Aleksandra. He even composed a short ballet program for them for a family gathering at his sister’s house, using a plot outline from “The Stolen Veil” written by German author Johann Karl August Musäus. “Swan Lake” is believed to be partially based on this.

The time he had spent at his sister’s house affected the creation of “The Nutcracker.” Tchaikovsky was reluctant to accept the job when the Mariinsky Theatre first asked him to compose the score. He thought Hoffmann’s story to be somewhat childish to be adapted to ballet. Besides, he was personally having a difficult time due to his fame, the parting with his patroness Madame von Meck, and the criticism about his homosexuality. While he was agonizing over the commission, he heard the news that his beloved sister Aleksandra had died. Deeply saddened, Tchaikovsky focused all his emotions on the composition for “The Nutcracker.” The Land of Sweets reminded him of his sister’s house, the Sugar Plum Fairy his sister, Clara and Fritz his niece and nephew, and Drosselmeyer himself. The once happy memories of his family got to live on forever in the magical composition by Tchaikovsky. 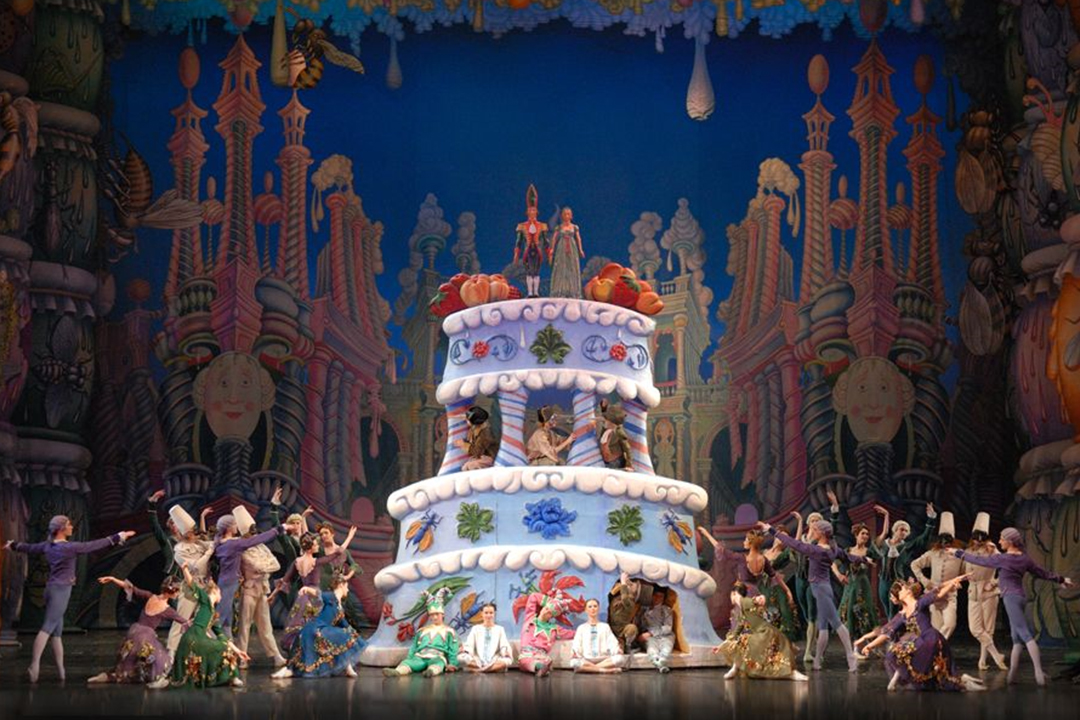 Tchaikovsky and Mariinsky Theatre
Today, Tchaikovsky is acknowledged as a composer who elevated the status of ballet music, once deemed a mere background to dancing. His ballet music delivers the drama and characters vividly at every moment while staying cohesive. Ironically, his top ballet trilogy of “Swan Lake,” “The Sleeping Beauty,” and “The Nutcracker” all failed to impress the audience in the beginning. In 1877, “Swan Lake,” now considered one of the masterpieces in classical ballet, faced criticism after its premiere at the Bolshoi Theatre in Moscow. Various factors contributed to the lackluster start, including issues in choreography and stage management, as well as mediocre performance by some of the dancers. Critics said the score by Tchaikovsky was too heavy and complicated. In despair, Tchaikovsky decided never to compose ballet music again.

Ivan Vsevolozhsky, who was named the new director of the Imperial Theatres in Russia including the Mariinsky Theatre in 1881, recognized that Tchaikovsky could help revive Russian ballet from becoming a mere merriment. He fired the tenured ballet composer at the Mariinsky and persistently asked Tchaikovsky to compose for the theater again. In the end, Tchaikovsky teamed up with choreographer and imperial ballet master Marius Petipa to present “The Sleeping Beauty” in 1890 and “The Nutcracker” in 1892 at the Mariinsky Theatre. Vsevolozhsky and Petipa also contributed to bringing “Swan Lake” back to stage after the death of Tchaikovsky.

“The Nutcracker,” the last one of the Tchaikovsky ballet trilogy, features bright and melodic tunes, unlike the melancholic tone of his previous works. It is worth noticing that he hired a children’s choir for the “Waltz of the Snowflakes” for the first time in ballet music history and used a new musical instrument known as celesta for the “Dance of the Sugar Plum Fairy.” Celesta is a type of keyboard instrument first invented in 1886. It was yet to be popularized in Europe when Tchaikovsky found a unit in Paris. Fascinated by its bright tones, Tchaikovsky allegedly kept it a secret so as to prevent other composers from using it before he did. Thanks to the celesta, he was able to create a lovely, sweet piece of music for the Sugar Plum Fairy. 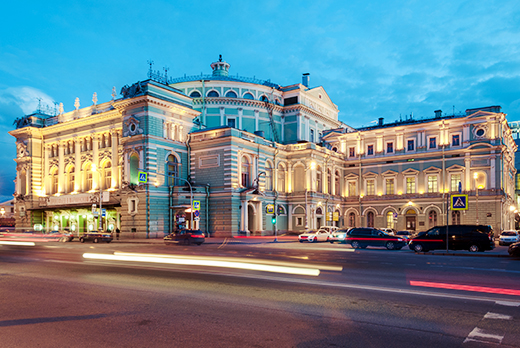 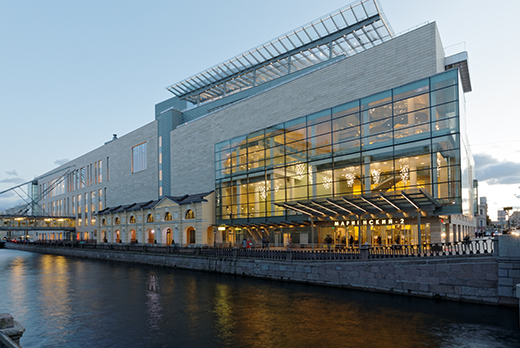 Various Versions of “The Nutcracker”
“The Nutcracker” has two production formats depending on who dances the Grand Pas de Deux(a structured dance duet in which a male and a female perform ballet steps together toward the highlight of the production). Petipa, in charge of libretto and choreography for the premiere, decided to give the Grand Pas de Deux to the Sugar Plum Fairy and the Knight instead of Clara, a young girl, resulting in negative reception. As the first act centered around the young protagonist and the climactic Grand Pas de Deux came out toward the end of the second act, many people found the format unfamiliar. The current popularity of “The Nutcracker” was with the new choreography sequence presented by Vasili Vainonen. In the 1934 version staged at the Kirov Theatre(what the Mariinsky was called during the Soviet era), Vainonen changed the name Clara to Russian-style Masha and had her dance the Grand Pas de Deux as an adult with the nutcracker-turned-prince in her dream. He also added a scene to the end of the ballet, in which Masha wakes up from her sleep, creating a more realistic storyline than the Petipa version. “The Nutcracker” at the old Mariinsky Theatre adopts the Vainonen format. On New Year’s eve, Korean-born Kim Kimin, who was the first Asian ballerino to join the Mariinsky Ballet and is now a principal dancer, will play the prince in the final performance of “The Nutcracker” of this year. 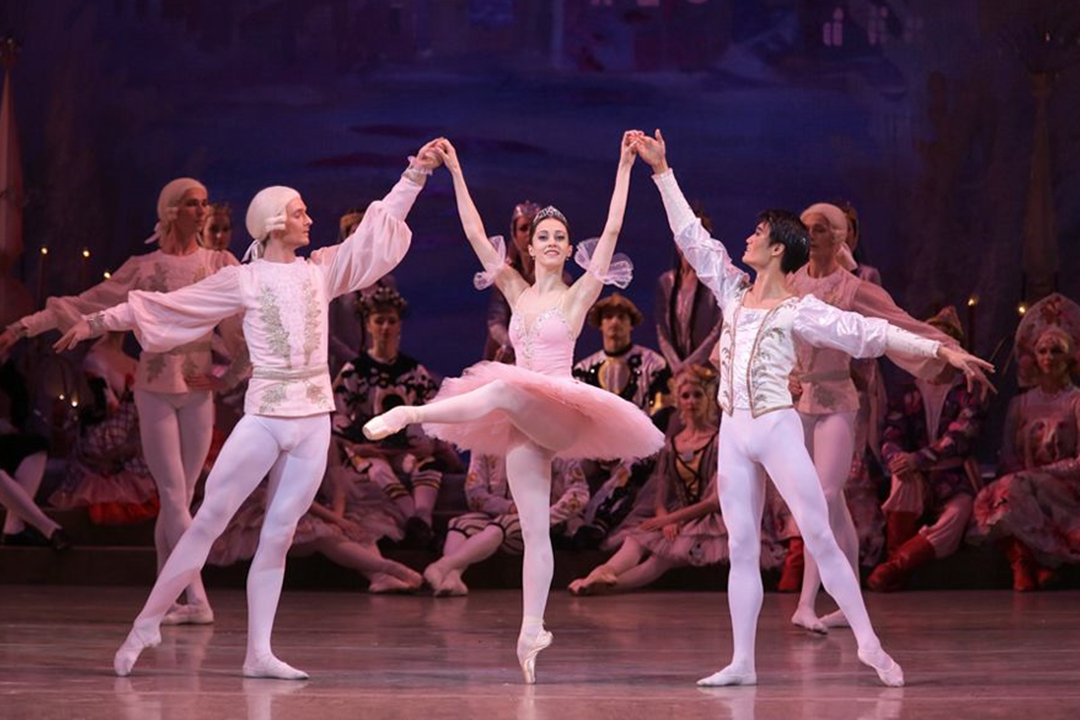 Meanwhile, at the newly-added Mariinsky Theatre, better known as Mariinsky II, “The Nutcracker” is on stage with a rather preposterous interpretation of the original story. Adapted by avant-gardist Mikhail Chemiakin and choreographed by Kirill Simonov, this version was in fact premiered at the Mariinsky Theatre in 2001. Set in a grotesque atmosphere like a nightmare, Masha grows up lonely in a family that favors Fritz and abuses her. The stage sets and costumes designed by Chemiakin represent the insecure, solitary mind of the protagonist. Originally, the “Waltz of the Snowflakes” were supposed to bring a beautiful ending to the first act. The adapted production has a church graveyard in the background and dancers in black outfits covered with snow. Having transformed into a snowstorm, the dancers in black targets Masha who’s leaving for the Land of Sweets. The ending of this prisonic fairytale is Masha never waking up from her dream after refusing to come back to her real world. Children who sat in the front row seats during the premiere were left dumbfounded by this oddly fascinating rendition of “The Nutcracker.” It’s now time for the audience to choose either a romantic dream with the nutcracker or a sinister nightmare this winter. 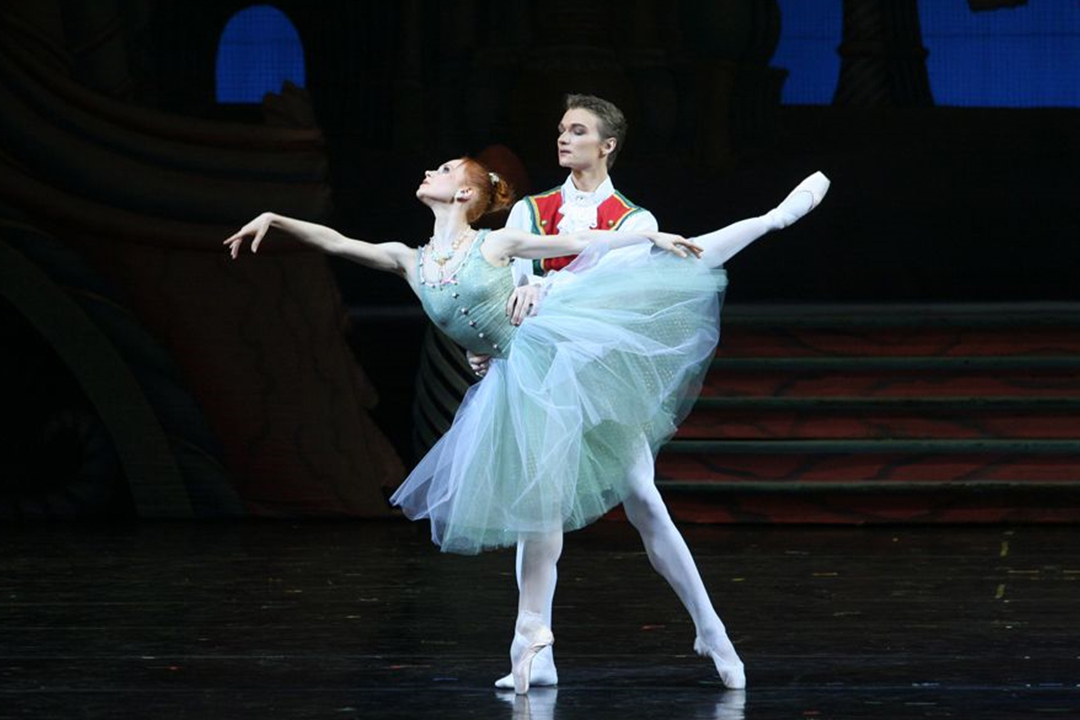 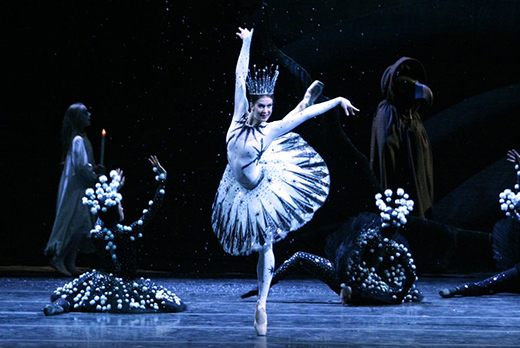 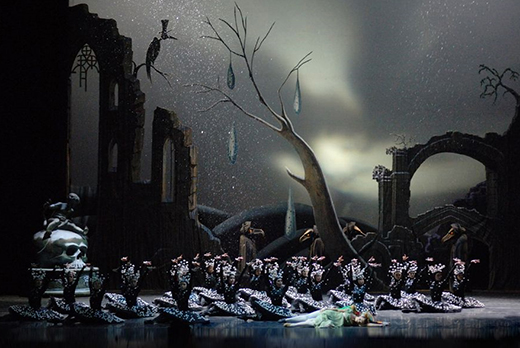 Mariinsky Theatre
Address 1 Theatre Square, St. Petersburg, Russia
Phone +7-812-326-41-41
Homepage www.mariinsky.ru
Where to Stay in Saint Petersburg: LOTTE HOTEL ST. PETERSBURG
Located in a 15-minute walking distance from the Mariinsky Theatre, LOTTE HOTEL ST. PETERSBURG is a remodel of a historic building used as an office by John Quincy Adams, the first American ambassador to Russia. The hotel commands a wonderful view, sitting across from St. Isaac’s Cathedral, the most famous tourist attraction in Saint Petersburg. It’s also close to the Hermitage Museum and Mariinsky Palace. With two restaurants, a roof-top bar, Mandara Spa, and a fitness club, LOTTE HOTEL ST. PETERSBURG is a popular choice among travelers looking for world-class dining options and high-end facilities. A total of 150 guest rooms are decorated in either classical or modern style, and guests may choose one to their liking. 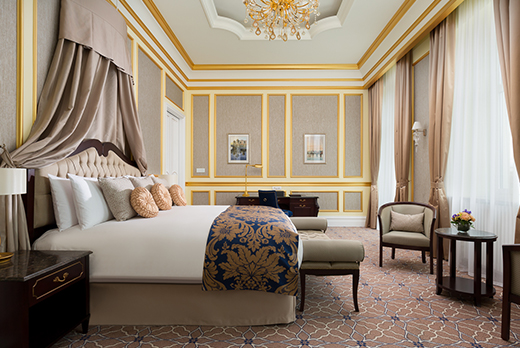 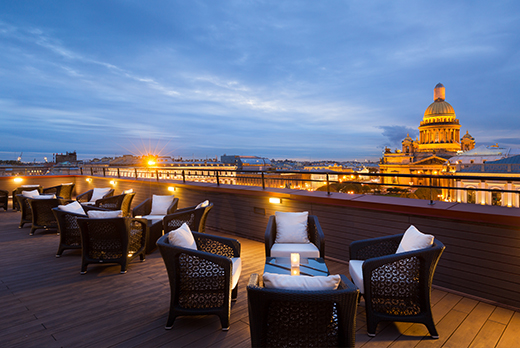