Seosomun Shrine History Museum, Place for Reflection
Seosomun Shrine History Museum has become one of Seoul’s hottest ‘Instagrammable’ places. But it’d be a shame if you just go there to take photos. Architects Lee Sang-rae and Park Jong-min took their cameras to Seosomun Historical Park, where Seosomun Shrine History Museum is located. We let these architects guide us and explore the significance of the museum.
The Intersection Outside Seosomun, Where Life and Death Collided
Hanseong (present day Seoul) in the Joseon Dynasty was different from other East Asian cities of that time. Hanseong had a liberal interpretation of humanistic concepts, and formed its urban space structure in ways that didn’t defy its surroundings. For instance, the four main gates were built with physical directions in mind, but Namdaemun stands far away from its intended direction and faces Seodaemun. And that’s because of the natural obstacle that was Namsan.

In between those four gates, four smaller gates were erected to form boundaries inside and expanding contact with the outside world. Seosomun was put up between Namdaemun and Seodaemun, giving the city three gates within a relatively small radius. The intersection outside Seosomun was the key traffic hub, with Euijuro (the present-day Tongilro that bridged Hanseong and Euijo) coming down from the north along Manchocheon and other roads flowing in through ports of Seogang, Yongsan and Mapo. Naturally, Namdaemun, Chilpae and Seosomun markets were put up along the gates’ boundaries. The area became one of the busiest in Hanseong.

During the Joseon era, the executions of state prisoners were held in a crowded public place, so as to instill fear into the mass. Principal figures from Hong Gyeongane’s revolution, Catholic persecutions, the Gapsin coup and Donghak Peasant Revolution were all beheaded at the intersection outside Seosomun. Seosomun was one of two places (Dongsomun being the other) where the remains of those who died inside the gates could be taken out. The fate of this area was determined as the city was being built.

But it was also a place where life kept people so busy they couldn’t just stand around and watch others get executed. There were bustling markets where people traded goods with the sound of the train in the background. Unemployed men wandered around, while children chirped their way around the neighborhood. It was where people came to live and relax. 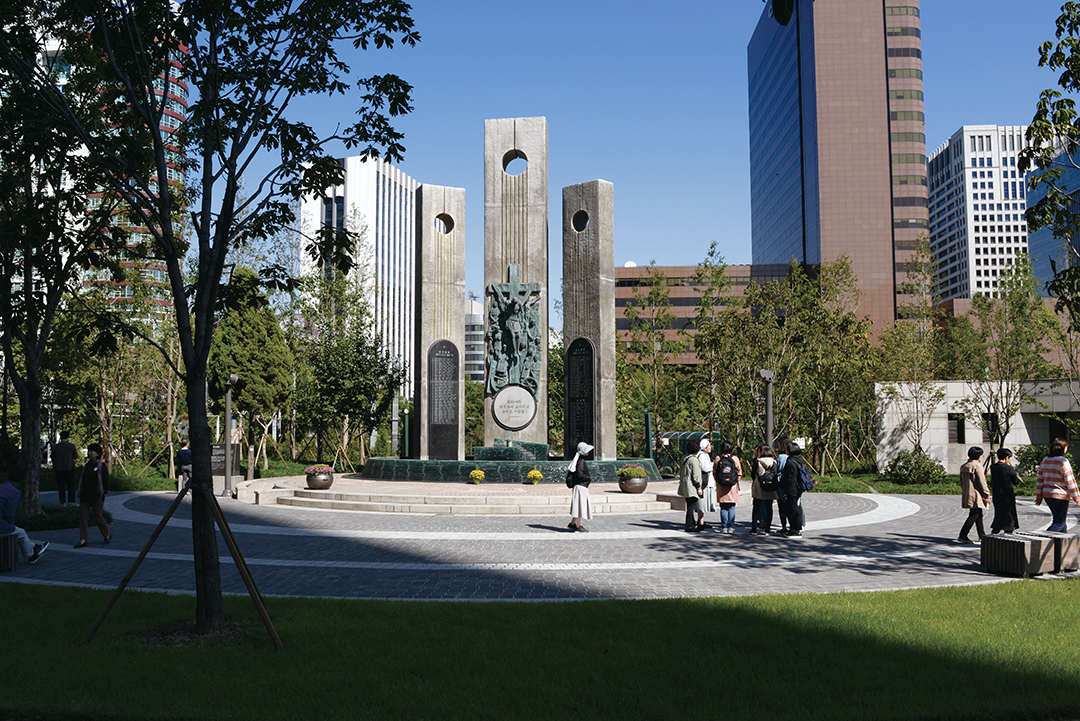 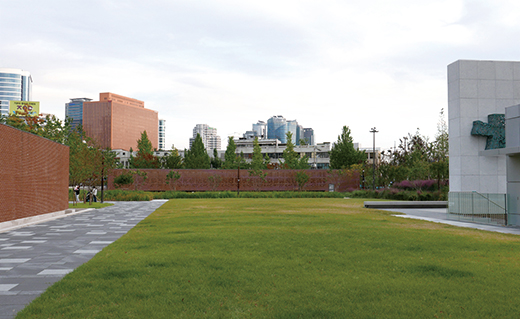 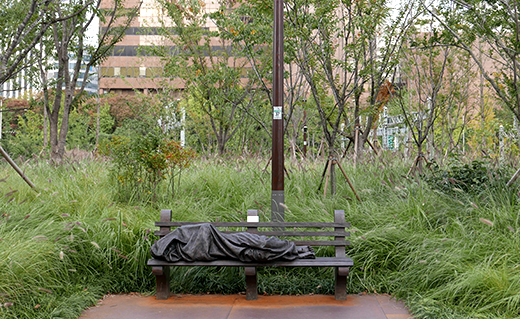 Seosomun Historical Park, Urban Oasis and Memorial
Seosomun Historical Park opened on June 1, 2019, nearly eight years after the Catholic Church led the effort to put together the proposal on July 24, 2011. It’s within walking distance from Jeongdong or Seodaemun toward Seosomun Overpass, and from the Handmade Shoes Street and across Yeomcheongyo, or even from Seoul Station and Jungnim-dong. What used to be Seosomun park, a flower market, an underground parking lot and a recycling center have been partially renovated to become Seosomun Historical Park. The park is above the ground, and Seosomun Shrine History Museum sits below the ground.

The historical park has the memorial tower in commemoration of martyrs who were executed during the Catholic persecutions. ‘Homeless Jesus 2013’ by the sculptor Timothy Schmalz also stands at the park. The commemorative park has restored historical places, including Manchocheon, which flowed along Euijuro and into Han River, and Dukke Well, where executioners were said to have washed their swords after beheadings.

In addition to commemoration, another key objective of this park project was to serve as an urban community park that can bring the meaning of the place and its surroundings into the context of the daily routines. Ground cover plants like pink muhlies, morning lights, birches, locust trees, pine trees and rowans, among other various plants, stand in contrast with the red bricks, exposed concrete made of roughly processed cast and weatherproof steel plate. And they help accentuate the beauty of each other. The building uses metaphor and metonymy to help you remember it. The landscaping takes a more direct approach, as it reproduces trees or sceneries around Manchocheon that carry particular significance. 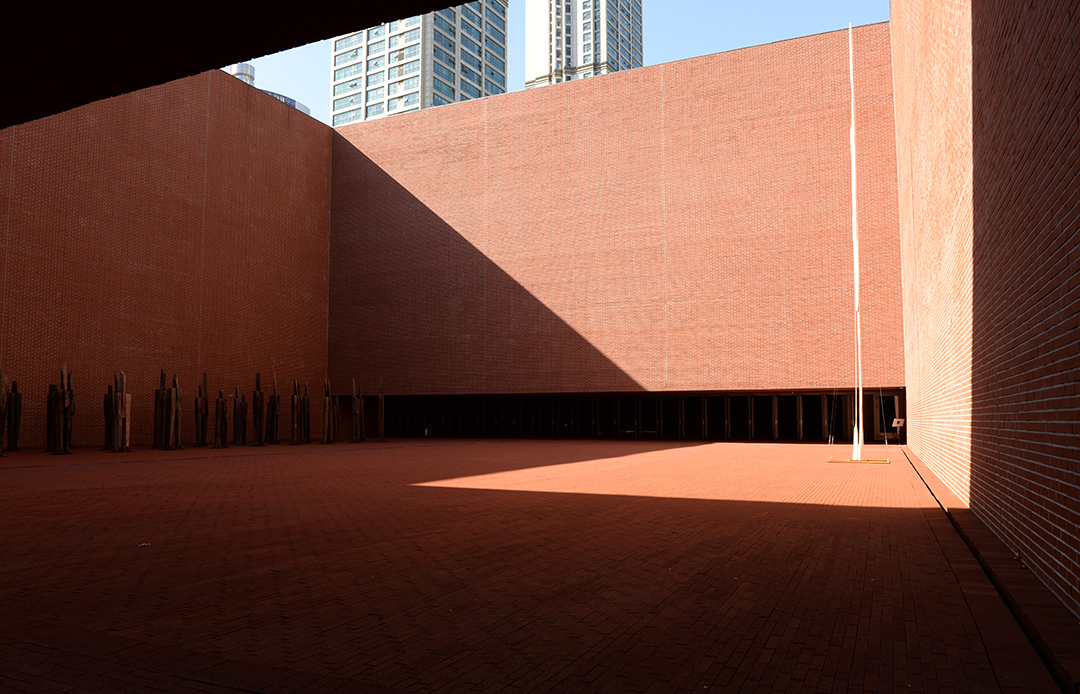 Seosomun Shrine History Museum, the Place for Remembrance
Seosomun Shrine History Museum, situated underneath the park, takes up four underground floors. The recycling center and the underground parking lot have been retained. It has the exhibition space that displays relics and historical records showing the religious significance of the shrine. St. Chong Hasang Memorial Chapel, Consolation Hall and Heaven Square are the metaphorical spaces that allow visitors to experience the essential meaning by breaking down religious significance and historical events. They don’t simply list information. And these places aren’t so much about architectural language. They’re closer to being the theatrical spaces that tear down the barrier between the stage and the actor in the Polish director Tadeusz Kantor style. 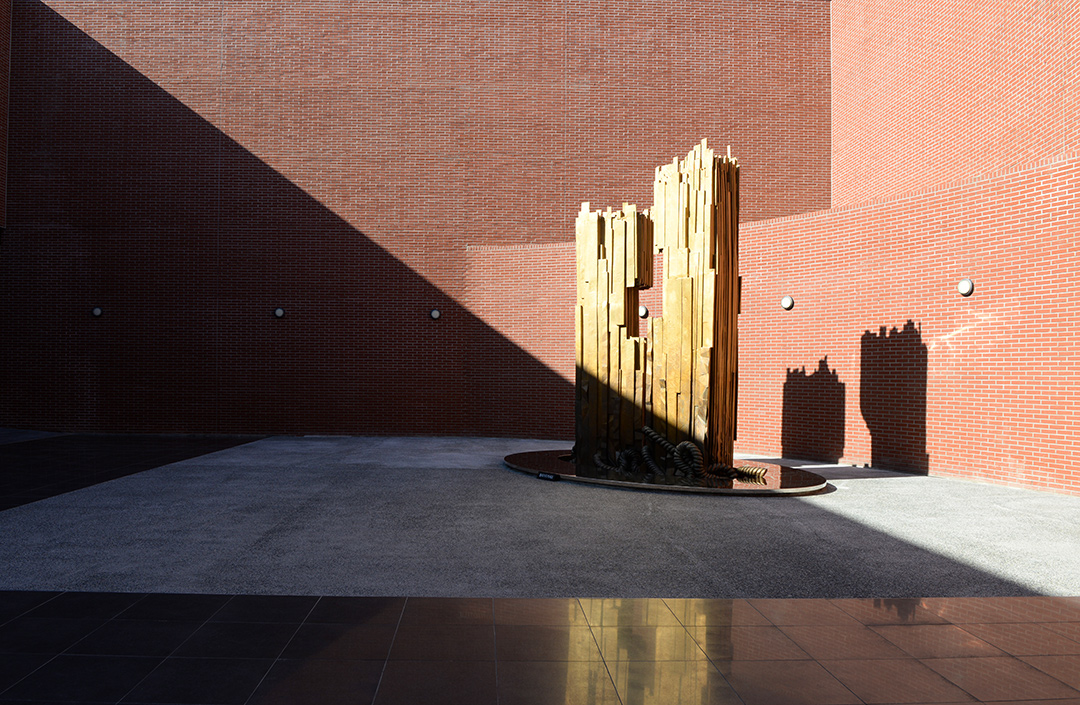 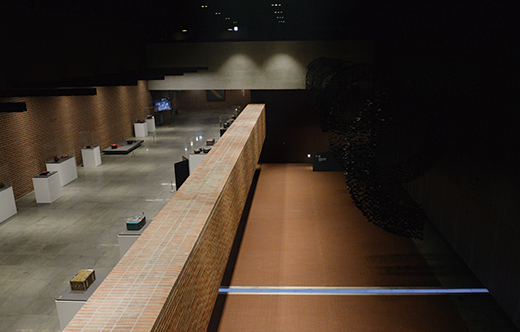 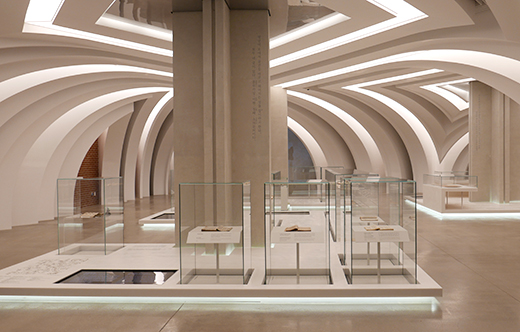 The entrance to the museum lies low and deep. The sculptures in sunken space on the left and different types of images created by individual properties of objects and lights. They help alleviate the pressure you may feel entering the museum and lead you into the religious space. There were limitations inherent to the original building, causing visitors to hesitate as they enter. But it only adds drama to the grand finale that awaits them.
You may feel lost at first but it’s actually a fairly straightforward place to get around. You can use the central stairwell to see the museum vertically. Or you can take the slope toward St. Chong Hasang Memorial Chapel and walk around Consolation Hall. And this is where the key drama of this space comes to life. 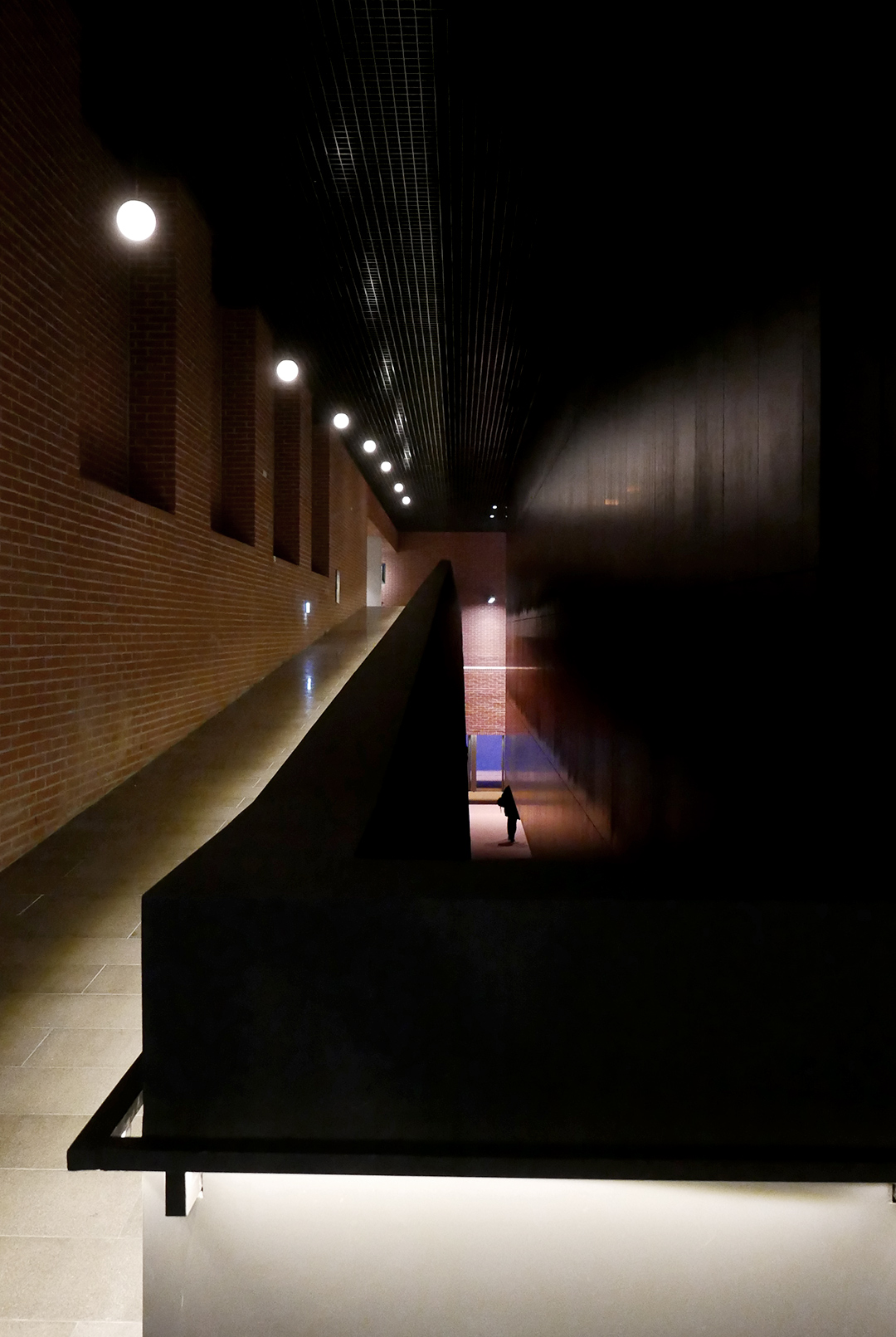 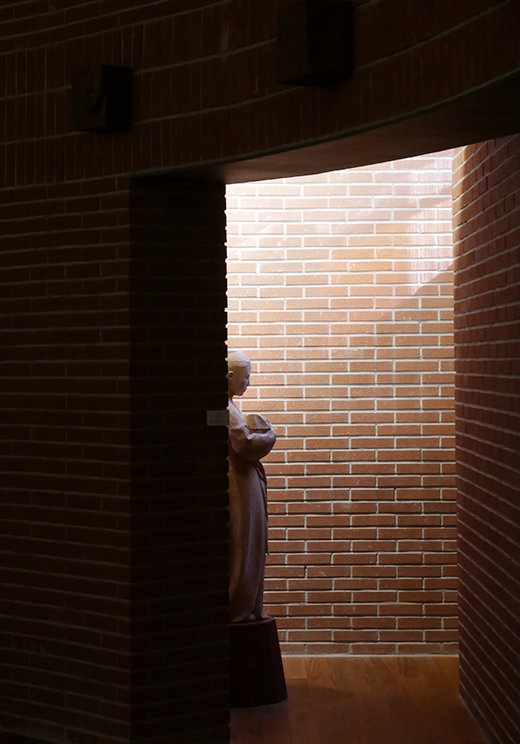 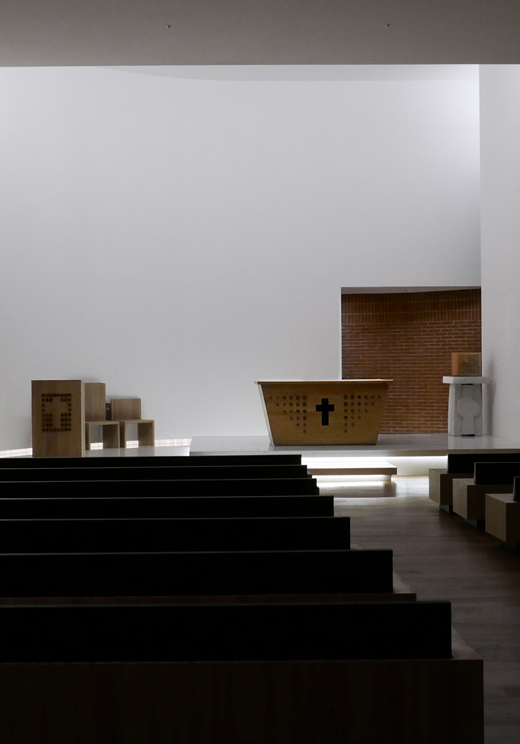 Ramp toward St. Chong Hasang Memorial Chapel and view of the inside of the chapel

The chapel isn’t like Ibadat khana, the house of worship built by the Mughal Emperor Akbar, an atheist who embraced all religions, for his spiritual experience. St. Chong Hasang Memorial Chapel doesn’t express religion as a symbol of authority. Instead, the aura it exudes compels the visitors to go silent and to humbly face their inner conflict. The architect, Yoon Seung-hyun of Interkerd, intended it to be that way. If you just look around the place, without getting conscious of the fact that you’re standing in a Catholic shrine, then you’ll find yourself paying your silent tribute to religious meanings.
If you follow down the ramp and toward the light from the chapel and the sound of a hymn, you’ll reach Consolation Hall, the cube-shaped structure hanging in anti-gravity style. Patterns on the hot steel plate look like teardrops. 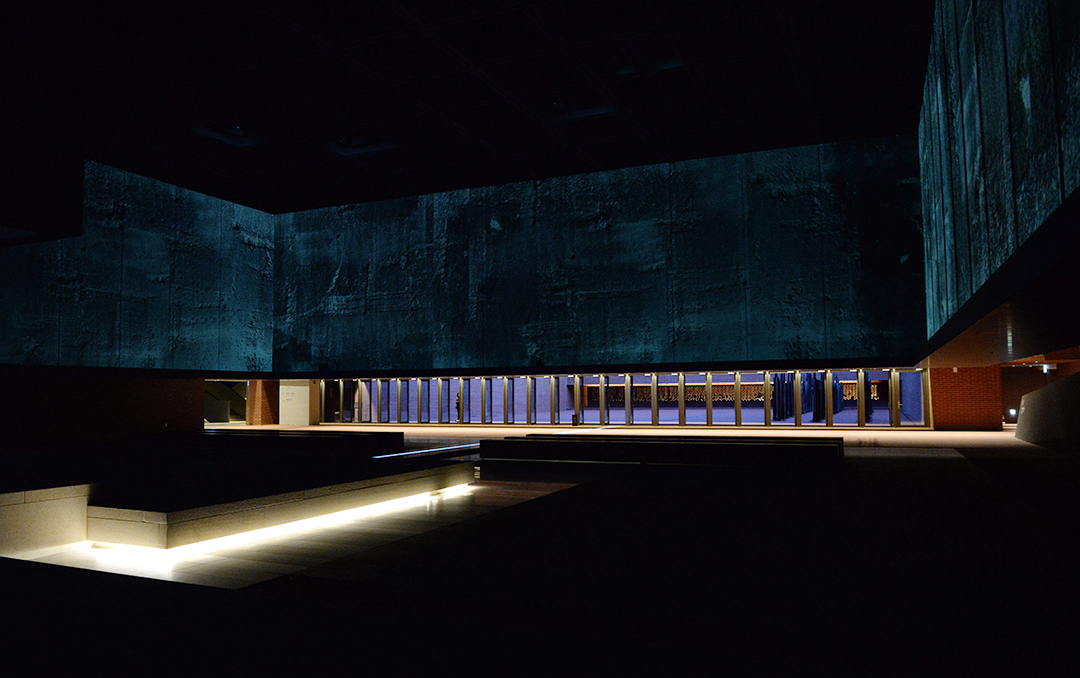 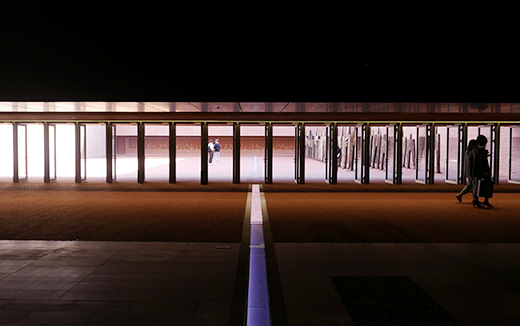 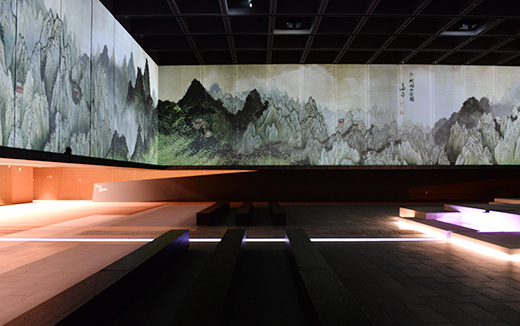 The hanging cube leaves just enough space underneath for people to pass through. And the feeling of snuggly comfort it provides makes you want to take a nap under the bench on a late afternoon. Follow the lights that represent Manchocheon and walk past 24 doors to reach Heaven Square. The red brick structure will finally reveal itself and its purpose. The architect must have intended it to give off a sense of spatial liberation, as if the deaths of martyrs and other good people who were well ahead of their time reach heaven.

‘People on Feet,’ an installation by the artist Jeong In that represents 44 martyrs, stands among red bricks to make you feel emotional in some peculiar ways. The spirits of the decapitated people blend in with the pure, rectangular space and the well-paved bricks against the backdrop of the blue, autumn sky. To be there is to cleanse your soul.
It will feel like the blessed ones ‘who hunger and thirst after righteousness’ from Matthew 5:6 will come to life at the memorial tower. This is not some apocalyptic scenery, but rather a well-written tragedy that will make you think about the meaning of life and of being alive at the end. It’s not Shakespearean tragedy where everyone suffers, but more Greek, Sophoclean tragedy where people realize the meaning of life and wisdom of life when they’re driven to the end. 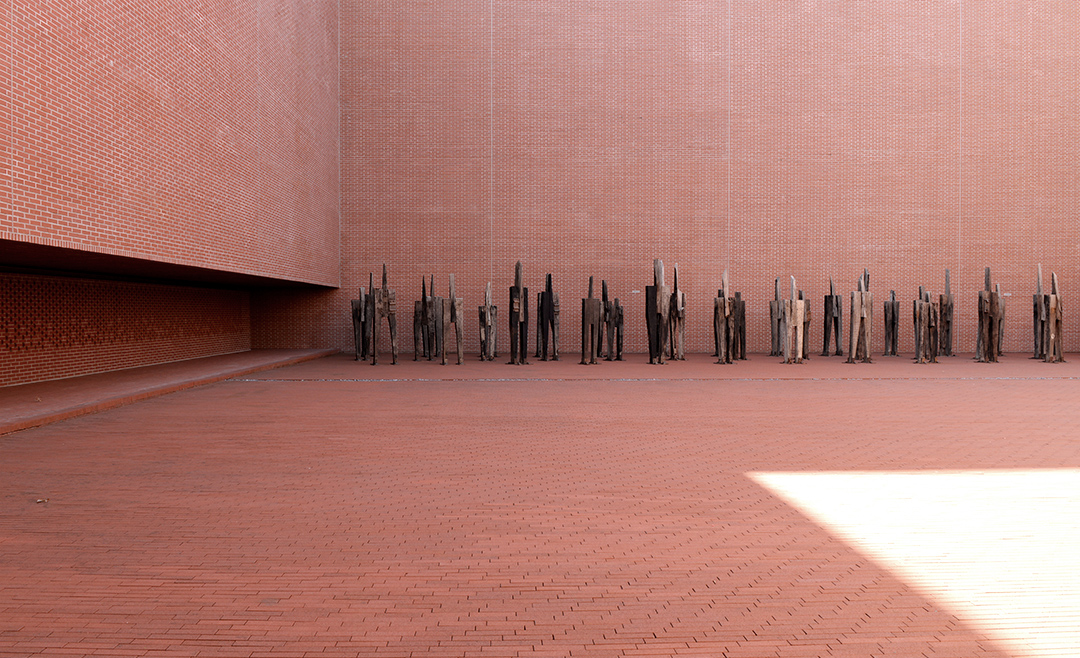 ‘People on Feet,’ an installation by the artist Jeong In representing 44 martyrs

From Seosomun Historical Park to Yakhyeon Catholic Church
Yakhyeon Catholic Church stands on the “Path of Life” on the second course of Seoul Catholic Pilgrimage, as authorized by the Vatican in 2014, along with the martyr site outside Seosomun. To get to Yakhyeon Catholic Church, follow the path south of the entrance to the Seosomun Historical Museum. The name ‘Yakhyeon’ comes from the old name of the area, which used to be ‘Yakhyeonjeon’ because of many medicinal herb (‘yakcho’ in Korean) fields around it. Gosanja Kim Jeong-ho’s birthplace is also in the area. After Catholicism was officially recognized in 1886, Yakhyeon Catholic Church was built in this area because it was close to the home of Peter Yi Seung-hun, the first Roman Catholic martyr, and because it offered a view to the ground for executions of other martyrs killed during persecutions. The French priest Eugene Jean George Coste, who designed Myeongdong Cathedral, built it in 1892 as the first Korean Catholic church building in the Western Gothic style.

The church stands on the hill to the west of Seosomun Historical Park, and you can get there by crossing the road at the three-way intersection where Chilpae-ro and Cheongpa-ro meet. Go up the small path on the left of the entrance, known as the Martyr’s Road (Road of the Cross), and the church building will emerge from behind the trees. You don’t have to be a Catholic to feel the warmth of the church. Because it stands facing the west, and in the late afternoon, you can enjoy gorgeous light shows created by the sun reflecting off the stained glass windows. From the top, you won’t have a clear view of the shrine because of trees and buildings, but you’ll have a glimpse of the southern edge of the Seosomun Historical Park. Seosomun Martyr Memorial Cathedral and Hall, built to celebrate the centennial of Yakhyeon Catholic Church, and St. Joseph Apartment, Korea’s first multi-purpose apartment built in 1971 for believers and monks, are nearby.
The way in up the hill may be a bit difficult, but the path down, whether you’re walking on the Martyr’s Road, heading toward Seosomun Historical Park, or going to Jungnim-dong, is far more pleasant. 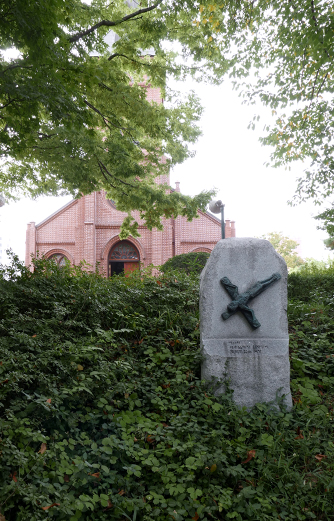 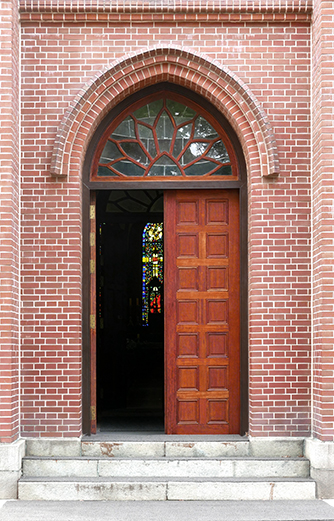 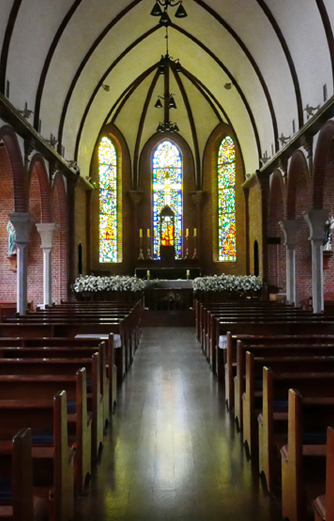 Yakhyeon Catholic Church, located at the end of the southern ramp from the entrance to Seosomun Shrine History Museum

Seosomun Shrine History Museum
Opening Hours  Tuesday and Thursday through Sunday 9:30-17:30 / Wednesday 9:30-20:30 / Closed on Mondays
Address  5, Chilpae-ro, Jung-gu, Seoul, Republic of Korea
Phone  +82-2-3147-2401
PROFILE
Architect Lee Sang-rae, the writer of these words, was born in a small town near the upper Nakdong River and makes a living in architecture. He enjoys the dynamics of the implicative and transcendent raw events taking place in isolated places, not to mention the wonderful sensation from the bodily reaction. He takes particular interest in the past civilizations created by points of contact and combinations, especially the contemporary meaning of the Arab-Islam and its ancient cities.

Architect Park Jong-min, who took the photos for the story, runs an architectural firm Studio Morph, while also taking time to photograph vintage corners of cities. He held a photo exhibition at The Studio in Samcheong-dong, and co-authored a book "Secrets of Architectural Photograph."