Madangnori makes a comeback
Madangnori was once a beloved style of storytelling in Korea, but over the years it seems to have been forgotten. Now, as it is starting to gain popularity again, performers are updating the quality and style of their productions to suit a modern audience.
Pansori, sound and novel
In the late Joseon dynasty, when literature wasn’t especially common in Korea, the distribution of popular culture was normally through pansori performances. A “sorikkun,” or a traditional singer, would hold a folding fan and sing to the beat of the pansori drums. As the singer weaved their story, the pansori drums would join in, working together to tell a tale in often detailed and nuanced ways.
Through pansori, audiences got to experience stories.
Popular stories performed by sorikkun spread by spoken word. Performers moved around the country to find new audiences, normally gathering locals together in fields to hear tales which often satirized the ruling classes.
Eventually, these stories from different regions were written down and combined into a collection of pansori tales. Some of these stories were organized into a novel which was widely read.
This novelized form of pansori may have gone out of fashion, but a lot of people today are still aware of the five madang of pansori — Chunhyangga, Simcheongga, Heungbuga, Sugungga and Jeokbyeokga. 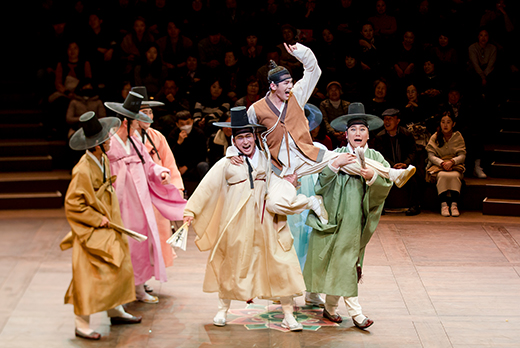 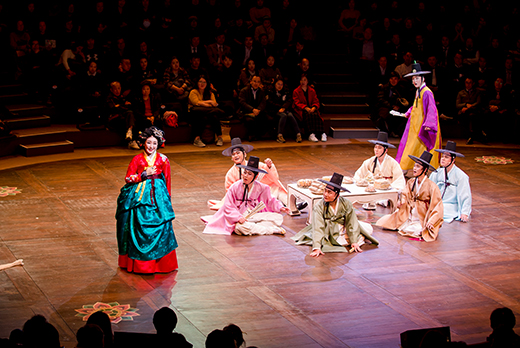 Satire and humor are part of what make madangnori so fun and charming.

It starts with a field
It’s unclear exactly when the pansori style of performance started, but many historians believe it started at some point in the 17th century among the lower-classes.
“Pan” literally means field. In older words, “pan” is often used to denote something fun or enjoyable happening in a field. On market days, clowns would perform in empty spaces in the fields, while the rich would also celebrate their gala days in fields. It’s likely that what we now know as pansori evolved out of these traditions
It wasn’t until the 20th century that the name “pansori” was used.
Stories based on pansori have gained a lot of popularity since being revitalized. "The Tale of Mr. Heo" began the trend in 1981. As a performance genre, it was also the first time that the name “madangnori” was used. Madangnori can refer to a number of different styles of production, but in the case of "Heosaengjeon(the Tale of Mr. Heo)", it can be interpreted as a Korean version of a musical that includes pansori, gukak and traditional costumes.
Through these mandangnori performances, traditional pansori fairytales have been recreated to suit our modern lives. 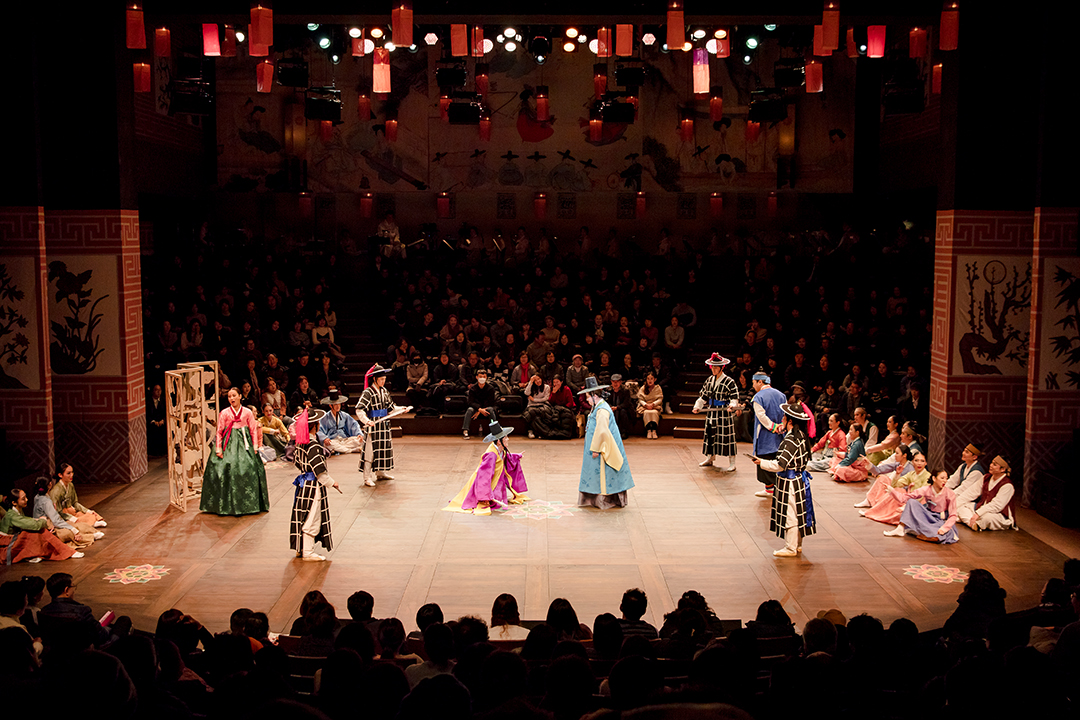 Back in 1981, "The Tale of Mr. Heo" was performed for free, as a public TV broadcaster was in charge of the whole production. This turned out to be a success, and the show was performed for free for four years. But starting from its fifth year, it started charging the audience.
There were concerns that the performance would lose a lot of fans as they had to start paying, but the seats were always filled. Every year, different madangnori like “Simcheongjeon,” “Chunhyangjeon,” “Heungbujeon,” and “Baebijang jeon” were performed. Each pansori was filled with humor, dance and music that suited the generation that the show was performed to. Throughout the show, the audience laughed.
At the time, producer Sohn Jin-chaek, actors Yoon Mun-sik, Kim Sung-nyu and Kim Jong-yub led the production.
But times have changed. The popularity of madangnori, which lasted about 20 years, slowly died. By the year 2010, madangnori was no longer being performed.
Madangnori returns to the National Theatre of Korea
Since 2014, madangnori has made its way back onto the stage, as a “planned show of the National Theatre of Korea.” Son Jin-chaek once again is in charge of production. The National Changguk Company of Korea, the National Dance Company, the National Gugak Orchestra and other organizations that are a part of the theatre have since participated in the show. With the help of the organizations, madangnori has become bigger and more professional.
The first performance at the National Theatre of Korea was "Madangnori Simchung." Older people, who remember the traditional madangnori, welcomed the performance that blended pansori, dance and humor. It also managed to break the stereotype that madangnori is boring to the younger generation.
It left the audience laughing out loud with biting contemporary references like “Chung, did you get the peanuts on the plate,” mocking the Korean Air nut-rage incident.
Following "Madangnori Simchung", "Madangnori Chunhyang" and "Madangnori Nolbo" were created and all gained a lot of popularity. In addition to the experience, some of the star actors in pansori started to take part and the fact that madangnori was being produced at the National Theatre of Korea made headlines. As a lot well known figures from Korea’s classical opera, dance company and orchestra were new to madangnori, there were comments that they seemed awkward in the beginning. But after a few years, they naturally blended into the show like professionals. 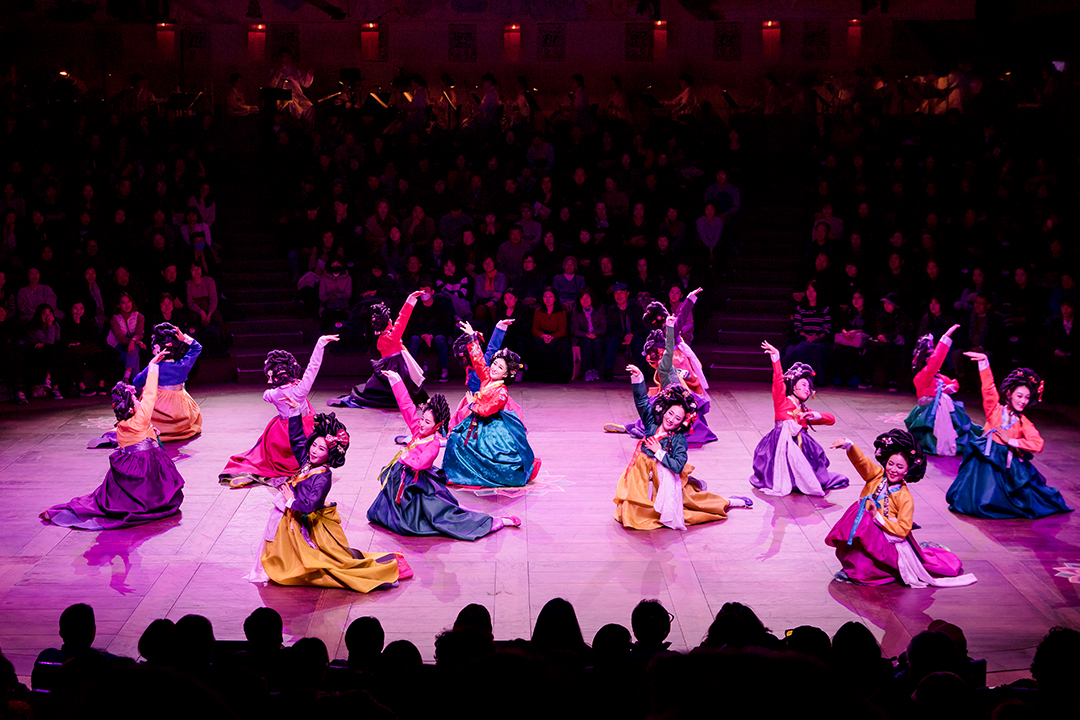 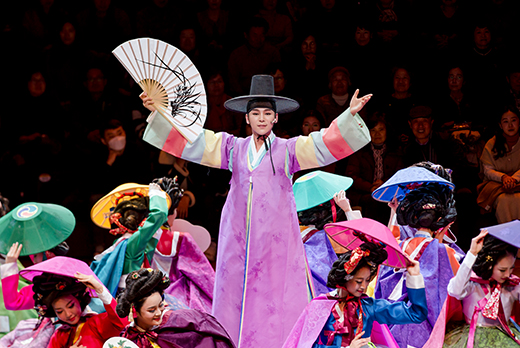 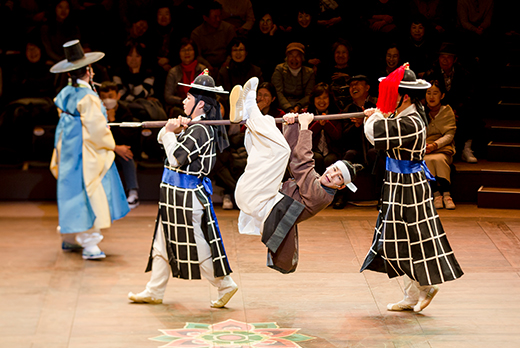 <Madangnori Chunpung> was co-produced by companies under the wings of the National Theater of Korea.

Like in 2018, "Madangnori Chunpung" will be performed in 2019. It gained a lot of popularity last year when Kim Joon-su of The National Changguk Company of Korea, who is a famous face in the world of pansori, took part in.
"Madangnori Chunpung" is based on a traditional Korean novel with a story of Chunpung, who fell for gisaeng Chuwol and spent all his fortune on her, but saved by his wife madam Kim and a housemaid Omok. The story depicts a heroic woman Madam Kim who cleverly saves her husband with humor and wits.
"Madangnori Chunpung" has plenty to offer viewers in their 20s and 30s as well. It is filled with improvised references to the current news. The humorous ad-lib of the main actors never fails to excite the fans.
Regardless of the time period, a show is always attractive if it makes the audiences laugh and cry at the same time. In December, you can find all of that and more at madangnori. 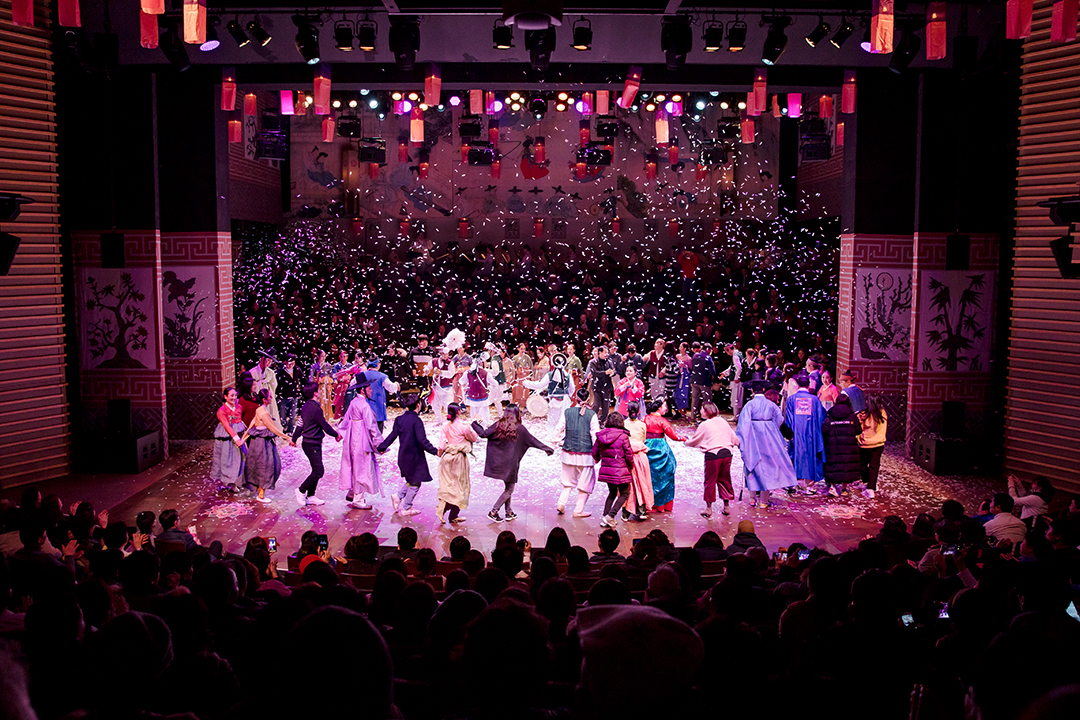