[DAYTRIP] Samarkand, Great Heritage of Timurid Empire
Amir Timur, the great conqueror who ruled over Eurasia in the 14th century, picked Samarkand, lying in the heart of the Silk Road, as the capital of his empire. We traveled to Samarkand, once the center of the universe, to trace the glory of the old empire.
Where Tashkent is the center of politics and economy in Uzbekistan, Samarkand, full of ancient buildings, is the pride of the national culture. The entire city has been added to UNESCO’s World Heritage List, and the World Tourism Organization has called it “Rome of the East.” The wealth of cultural heritage in the city can be traced to its history. It’s all thanks to Amir Timur, the last great conqueror of the continent.
Civilization in Samarkand began around fifth century BC. Because of its strategic location connecting the West and the East, it was vulnerable to attacks from all over the place. Then in the late 14th century, with the emergence of Timur as its leader, Samarkand flipped the script. Timur took over the Central Asia and established the Timurid Empire in 1370, with Samarkand as the capital. 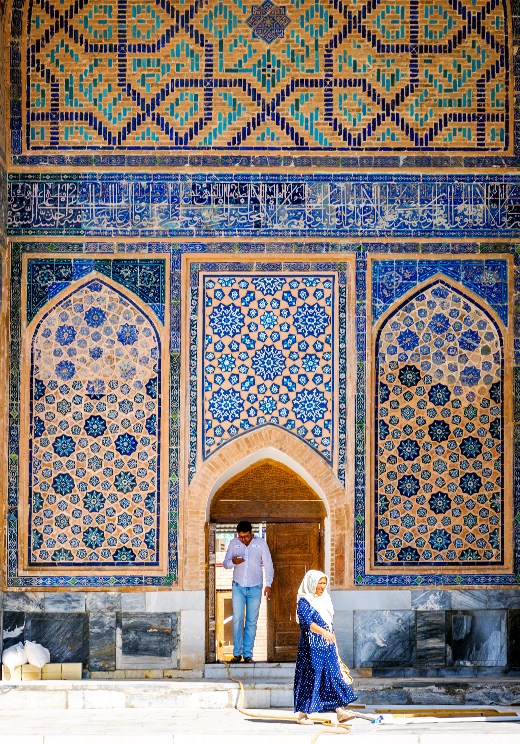 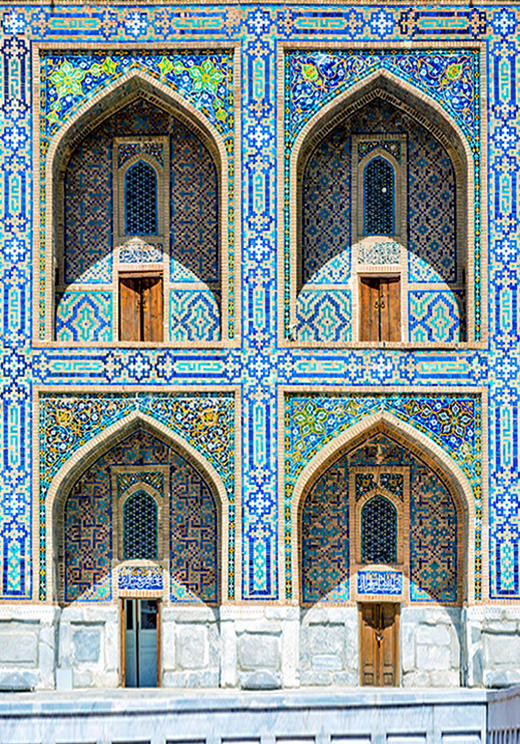 Timur’s military reached beyond the Central Asia and moved into what is today’s Russia, North India and China. Riches acquired along the way were spent on developing Samarkand. And Timur’s grandson, Mirza Ulugh Beg, was well-versed in academics, and used the considerable family wealth to build the most advanced schools and observatory in the 15th century. Samarkand was the heart of the empire, the hub of the Silk Road, and home of the greatest resources in art, culture, technology and academics.
Though the empire collapsed after about 130 years, numerous relics that have been preserved in Samarkand help tell the story of glory from centuries ago. Samarkand is about a two-hour, express train ride from the Uzbekistan capital Tashkent. We traveled across the vast fields that Timurid troops must have stomped on, and moved back in time to Samarkand’s finest moments. 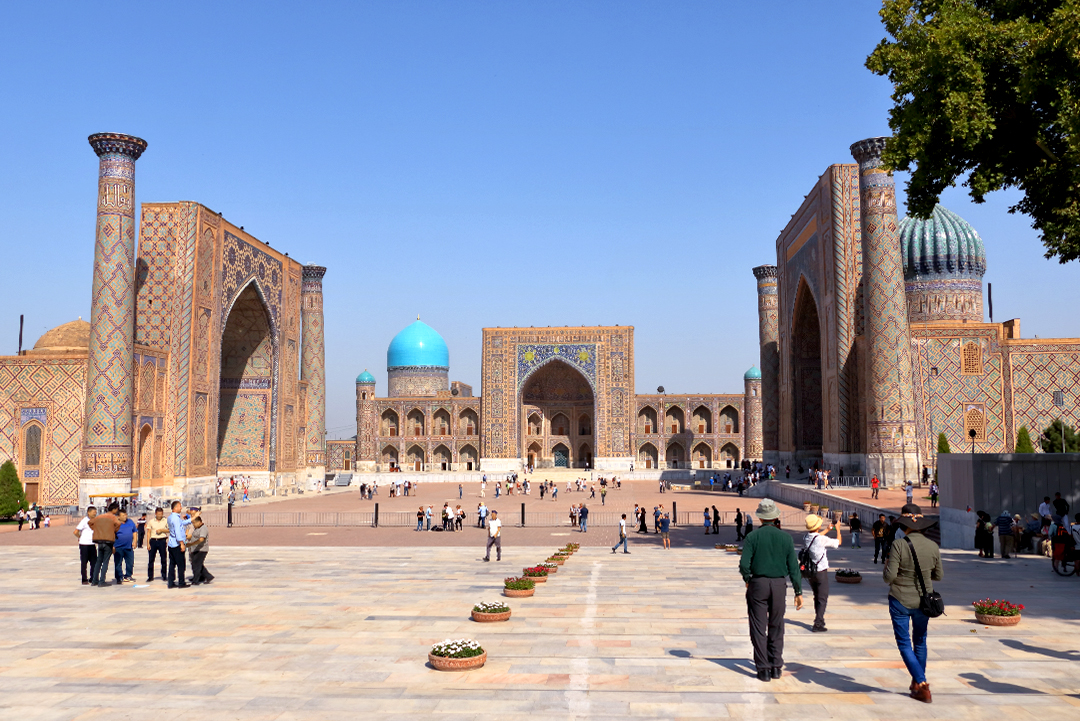 [10 AM] Registan and Three Madrasahs
They say, “All roads lead to Rome.” And all jewelry traveling on the Silk Road had to pass through the Registan. Meaning ‘sandy place,’ the word ‘Registan’ once referred to a public square in a Central Asian city. But of all the remaining Registans, the one in Samarkand stands above all else, in terms of its symbolic value and its sheer beauty.
When you look straight ahead near the entrance, you’ll see the three Islamic schools, called madrasahs. Timur built the Registan into the most thriving market on the Silk Road, but his descendants turned it into an academic center. 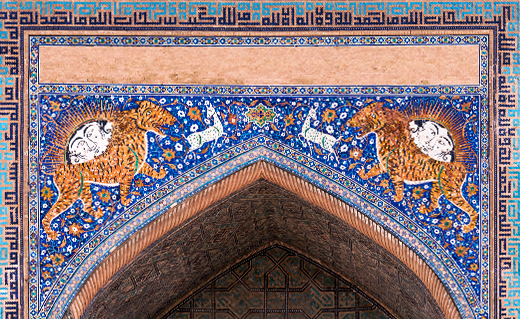 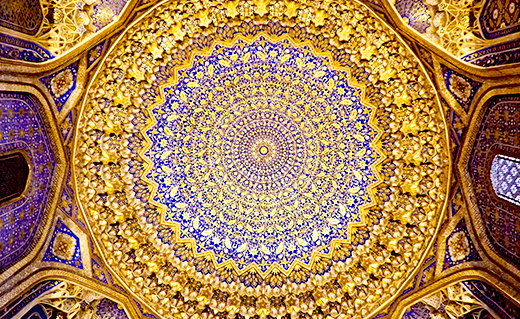 Decorations on the ceiling at Tilya-Kori Madrasah

Ulugh Madrasah (1417~1421) on the left is the prestigious institute built by Ulugh Madrasah. In addition to religions, it taught mathematics, astronomy and philosophy. Fittingly enough, it is decorated with stars and geometric patterns. Standing on the opposite end is SherDor Madrasah (1619~1636). The image of the lion at the entrance stirred controversy, for the Sharia prohibits drawing animal patterns. But it’s become so widely used that it graces bills in Uzbekistan. Tilya-Kori Madrasah (1641~1660), standing in the middle, was built to quiet the critics of the lion pattern. And it’s especially luxurious. The gilded ceilings and walls of the mosque are so spectacular that they will make your jaw drop.
The Registan, once the hub of the Islamic education, now serves as the market for traditional craftworks. Handmade clothes and ornaments serve as proof of Samarkand people’s aesthetic sense that has stood the test of time. 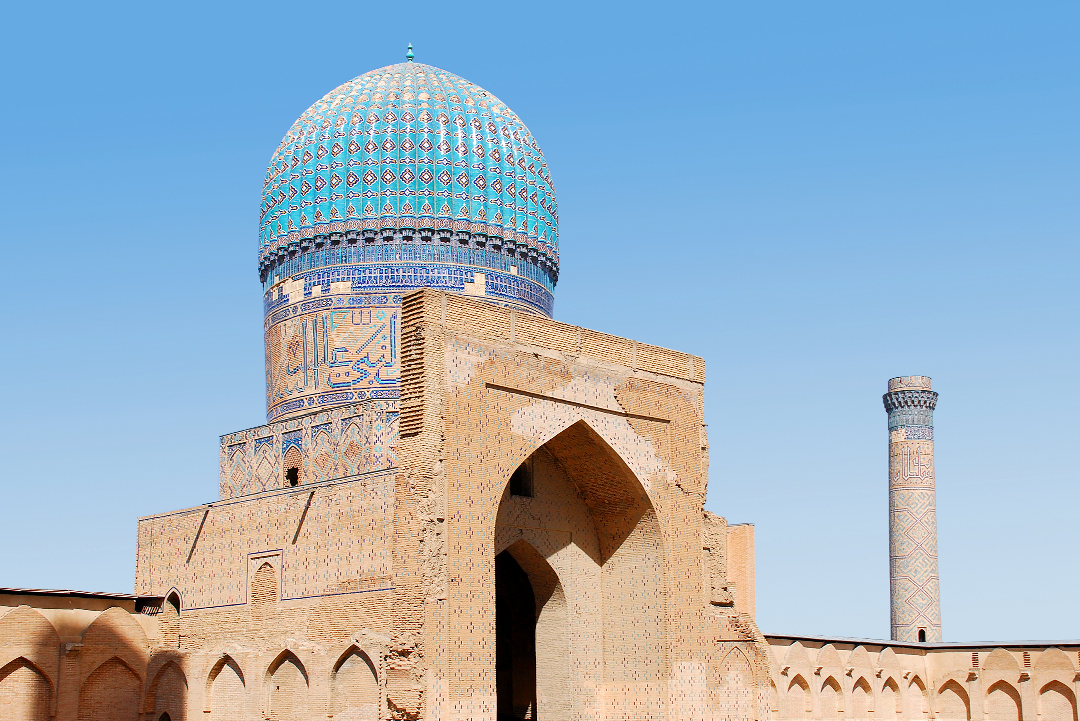 [11 AM] Bibi-Khanum Mosque, Love of Timur
Timur had eight queens, but perhaps Bibi-Khanum is the only one still remembered by the people today. Meaning ‘highly-respected lady,’ Bibi-Khanum was also the nickname for the queen that Timur loved the most, Saray Mulk Khanum. To erect Bibi-Khanum Mosque (1399~1404) for her, Timur recruited the finest architect of the time, not to mention about 200 stonemasons, 500 workers and 100 elephants. Standing 40 meters tall, the mosque was at the time the largest of its kind in the world. The lavish decorations with gold, marble and mosaic were also a thing of beauty.
Ironically, the love between Timur and Saray Mulk Khanum headed toward a tragic ending after the mosque was complete. The legend has it that while Timur was away, one architect fell in love with the queen and began courting her. The queen allowed the man one kiss, but couldn’t remove all the evidence. Timur, enraged, executed the architect and pushed the beloved wife from the top of the spire to kill her as well. The story hasn’t been proven, but if you visit mosque, so desolate that its glory days seem to be in such a distant past, you’ll feel like the late Bibi-Khanum has cursed this place. 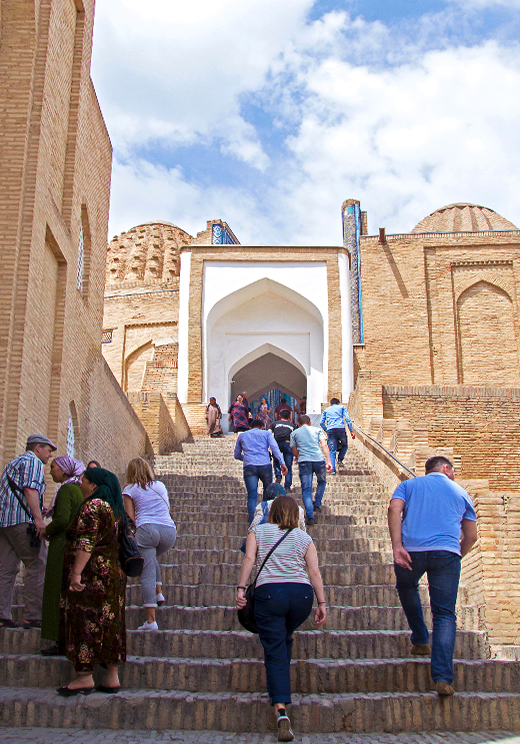 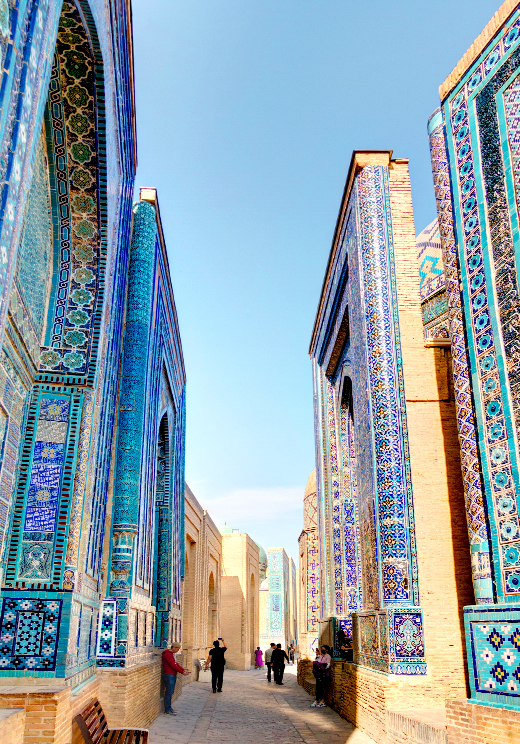 [12 PM] Shah-i-Zinda, Blue Dream of Muslims
For Muslims, Shah-i-Zinda is the most significant place in Samarkand. Members of the Timur royal family, plus other famous Muslim leaders and missionaries are buried here. Before reaching mausoleums, visitors and pilgrims first take the ‘stairway to heaven.’ If the numbers of steps going up and down are the same, you’ll get to go to heaven, according to legends. But if there’s a difference, you have to get the same number of sins pardoned.
Past the stairway, you’ll see some 20 mausoleums stretched over about 200 meters. The glazed tiles at the entrance seem to embrace everything that’s blue in this world. The surface changes its color depending on the sunlight, and the meticulous patterns are endlessly repeated. You can almost feel the sublime spirits of old masters. No two mausoleums have the same shape or patterns. This place has once been called the gallery of Central Asian architectural art. 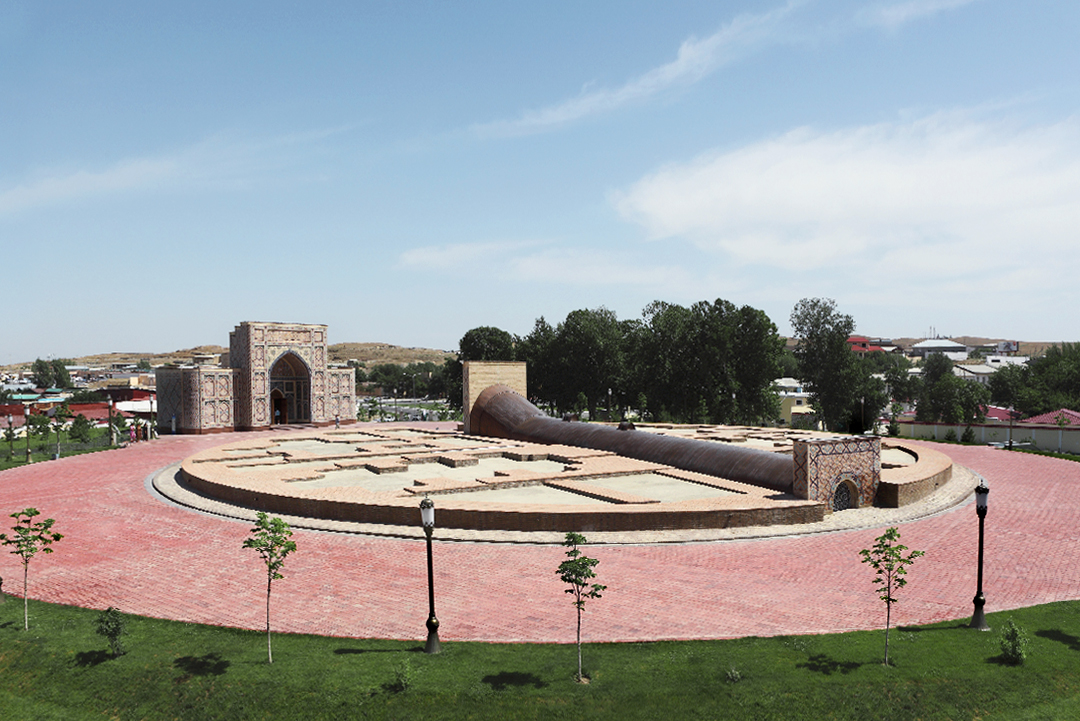 [2 PM] Ulugh Beg Observatory, Beacon for Science in Desert
If you’ve visited all the great pieces of architectural work in Samarkand, it’s now time to check out places of higher learning. While Timur devoted his life to expanding territory, Ulugh Beg wanted to expand knowledge of the people through science. He was at once the sultan and the astronomer, and had a keen interest in the workings of nature.
Ulugh Beg Observatory (1419~1429) is the symbol of Ulugh Beg’s dedication to astronomy. The restored observatory that you see today only has the basic frames and parts of a hexagon-shaped astronomical instrument. Originally, Ulugh Beg is said to have studied the celestial movements from the 40-meter-high observatory dome and estimated the location of the Earth and time. Without the benefit of a telescope, Ulugh Beg’s calculation of a year was only off by a minute from the actual length.
But the sultan’s tireless devotion to science must have been a thorn on the side to the religious ones. Ulugh Beg was assassinated by his opposition. Ironically, it was his sheer brilliance that would later come to be a source of pride for Samarkand that cost Ulugh Beg his life. 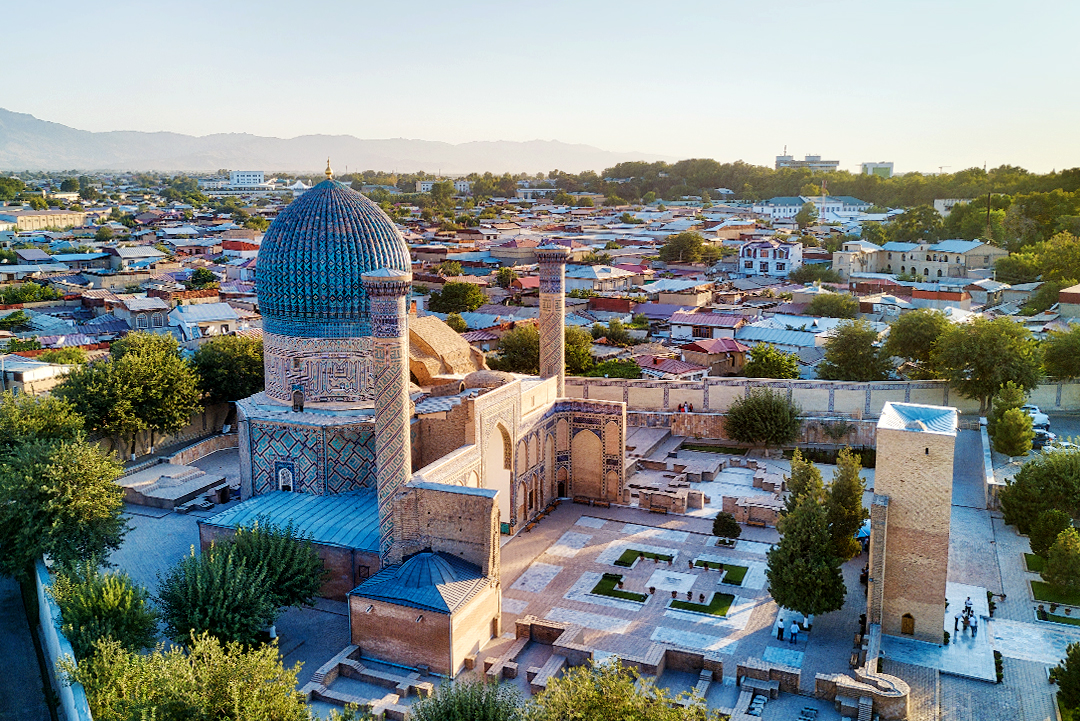 [4 PM] Gur-e-Amir, Where the King is Buried
Timur didn’t skimp on investments to help grow the capital city, and he was never the one to feel satisfied. He spent most of the time on the road, and winning battles was his raison d’être. And in 1405, while leading his troops to Ming China at age 69, Timur died of an illness. It’s almost a fitting way of dying for such a nomadic conqueror.
He’s buried in Gur-e-Amir (1404), which Timur had built for his grandson who’d died young. He probably couldn’t have imagined he’d be buried in the same place. The name ‘Gur-e-Amir’ is Persian for ‘tomb of the king.’ It’s lavishly decorated with gold, turquoise, marble and mosaic, and the dome features 64 ribs that add an air of prestige. 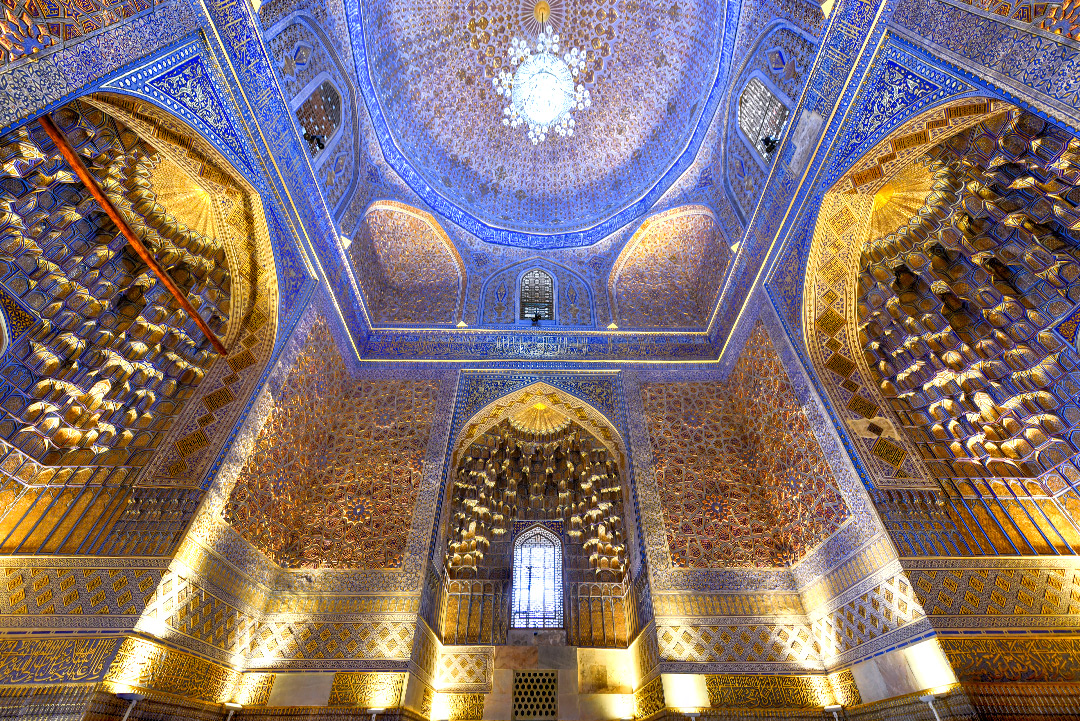 Decorations on the dome at Gur-e-Amir

On the ground level, there’s a replica casket for Timur marked with a jade green panel, and the actual casket is underground. A plaque at the tombstone apparently read, “Anyone who breaks my peace in this life or in the next one will suffer and perish.” Some Old Soviet archeologists opened the tomb in 1941, and then Nazi Germany invaded the Soviet Union soon afterward. No one will dare mess with the tomb.
Timur, who never had a permanent home, found his resting place in Samarkand, the city he built from the ground up. The glory of Timurid Empire was short-lived, but the heritage from its halcyon days continue to draw travelers from all over the world into Samarkand. 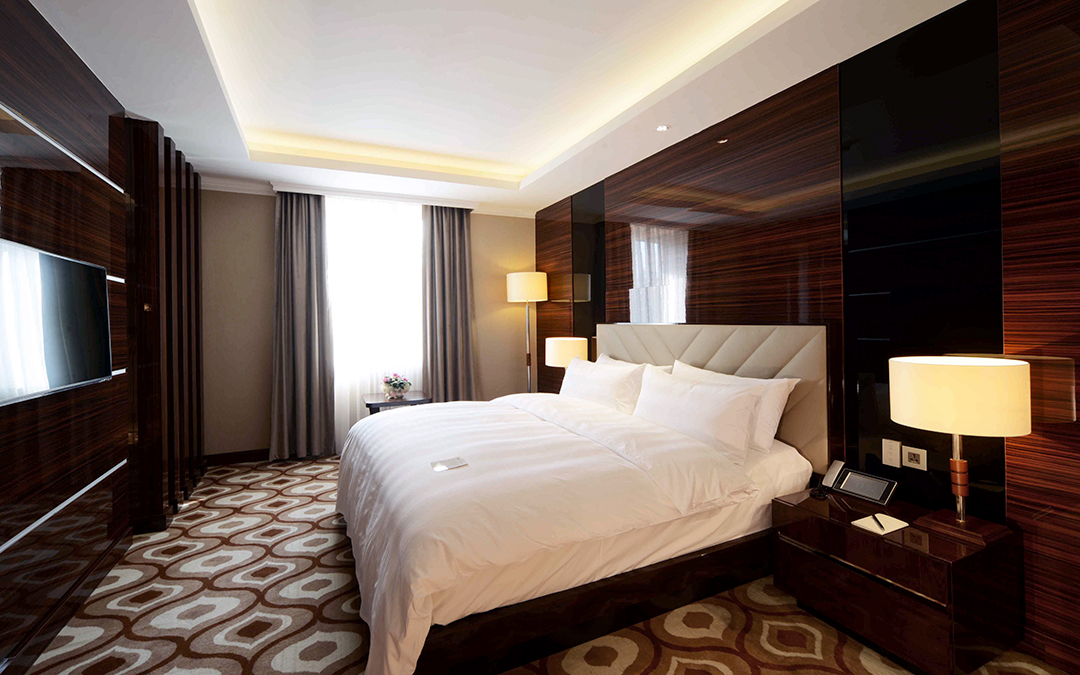 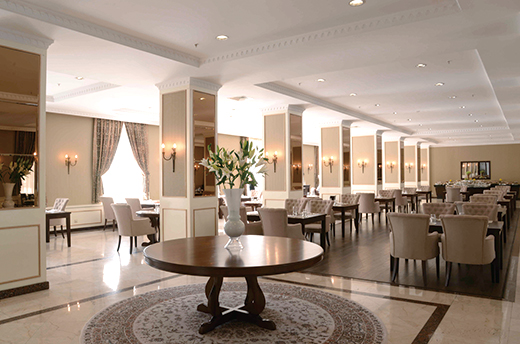 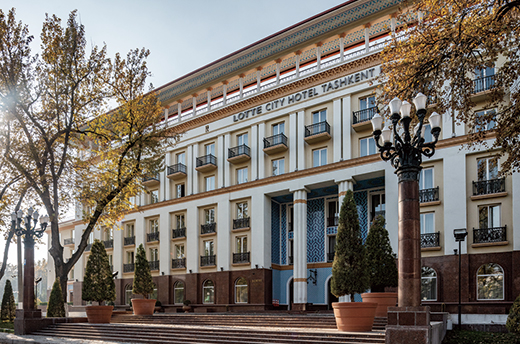 Where to Stay in Tashkent: LOTTE City Hotel Tashkent Palace
LOTTE City Hotel Tashkent Palace is situated in the heart of Tashkent, the most modern city in Uzbekistan. The hotel is housed in a building designated as the national cultural heritage, offering guest rooms and facilities on par with those at six-star hotels. The restaurant serves everything from traditional Uzbekistani food to Korean dishes, a spa and an outdoor pool for relaxation, and the kind of dedicated services you’ll only enjoy at LOTTE HOTELS. There’s no better way to wrap up your trip than to stay here.