Lone Island in Mountain, Museum SAN
As the sun set, darkness enwrapped the museum. Largely dependent on natural sunlight coming through the big windows with only minimal indirect lights inside the building, the place reacts candidly to the flow of time. The Museum SAN, which resembles a lonesome island that has isolated itself from the bustling city, presents a private experience of relaxation, freedom, and beauty amid nature and art.
The journey to find the Museum SAN in the mountain makes you feel like a wanderer among ancient relics. If you choose to drive to the museum, your car will stay on a path to the mountain for quite some time. When you are about to question whether the museum does exist, you will find an entrance marked “The Museum SAN.” After driving about an hour and a half from Seoul, you finally stand in front of the museum that sits 275 meters above sea level in a woodsy Wonju, Gangwon Province. 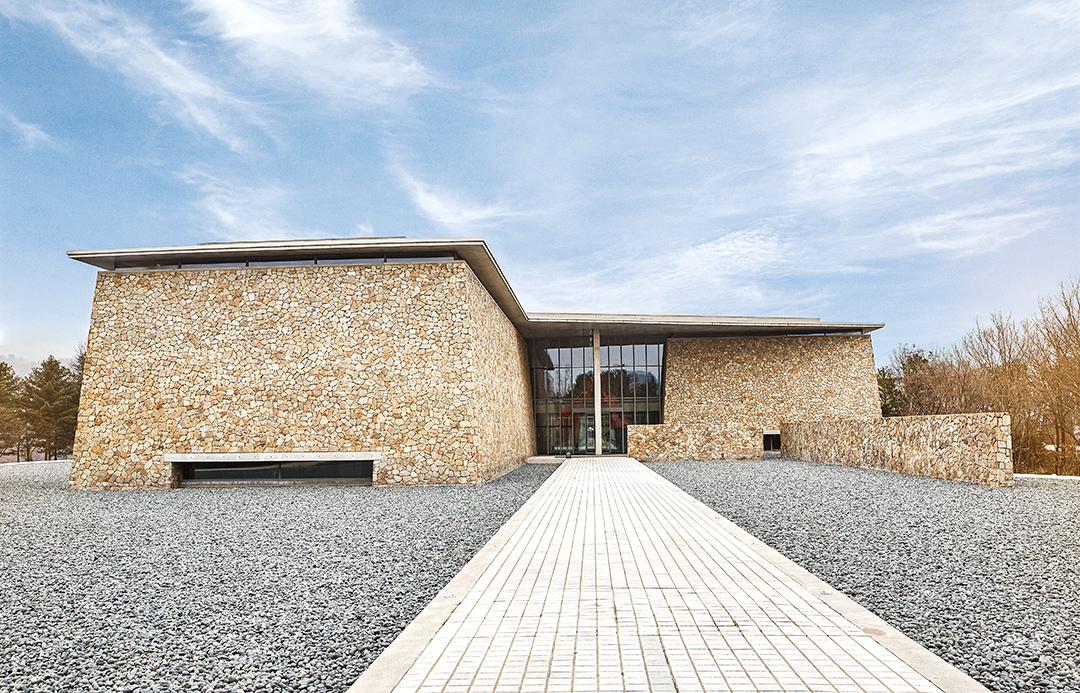 View of the museum’s main building. During winter, the Water Garden without water greets visitors. 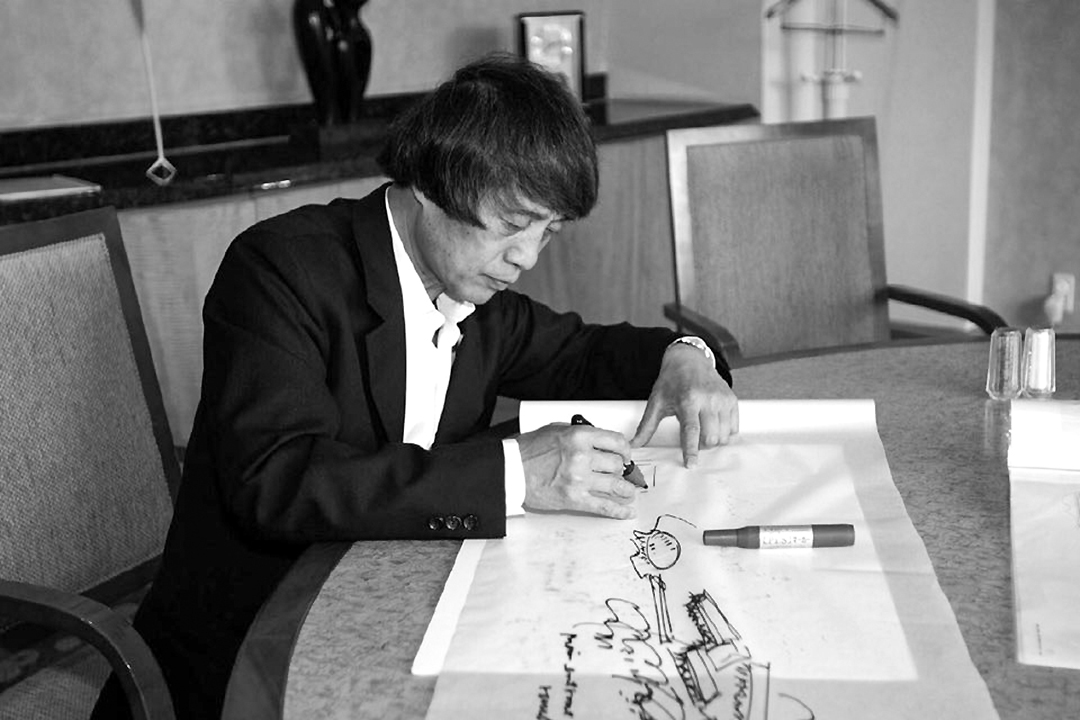 Landscape Designed by Tadao Ando
The beginning of the Museum SAN goes back to 2005. The Hansol Cultural Foundation set up a plan to build a museum complex to merge with the Paper Museum which had opened in 1997, and contracted Tadao Ando for its design. “When I first saw the site, a long piece of land stretched toward the mountaintop. I imagined I could create a different world removed from its surroundings on this unusual ground.” What Ando had said became true eight years later in 2013. On a plot of land stretching a little over 20,000 pyeong, minimalistic gardens by the Japanese architect known for his works embracing natural light and nature were established, along with galleries. Dispelling Ando’s concerns over the distant location of the museum and a potential loss of visitors, the Museum SAN was anticipated, even before the big opening, by many people who had heard that the architect was Tadao Ando and that works by James Turrell would be displayed. When the museum officially began operation in 2013, it immediately became a major attraction of Wonju. 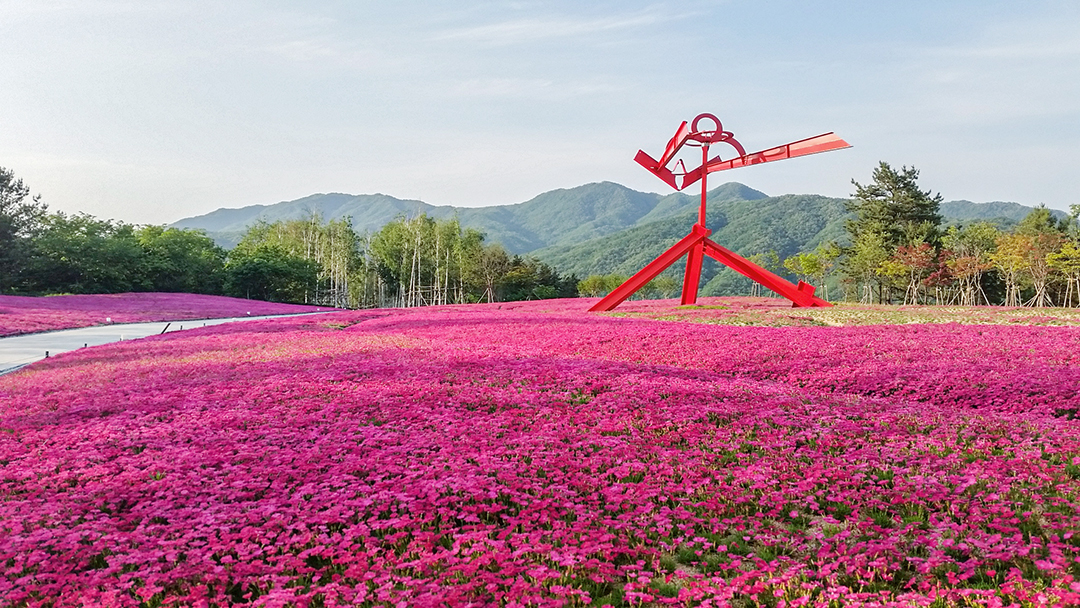 The Flower Garden in spring, with the red China pinks in full bloom © Museum SAN

Two Gardens Leading to Museum
The Museum SAN greets you at the Welcome Center, a starting point of a long stretch of path occupied by the Flower Garden, Water Garden, Museum, Meditation Hall, Stone Garden, and Jame Turrell Exhibition. The positioning of the gardens and buildings took into consideration the site’s topographical features. After passing the Welcome Center with the ticket counter and information desk, you encounter the Flower Garden first where 800,000 China pinks bloom every May and 180 birch trees form a forest. In winter, instead of flowers. a red sculpture entitled “For Gerard Manley Hopkins” created by Mark di Suvero to honor a Victorian poet captivates visitors. 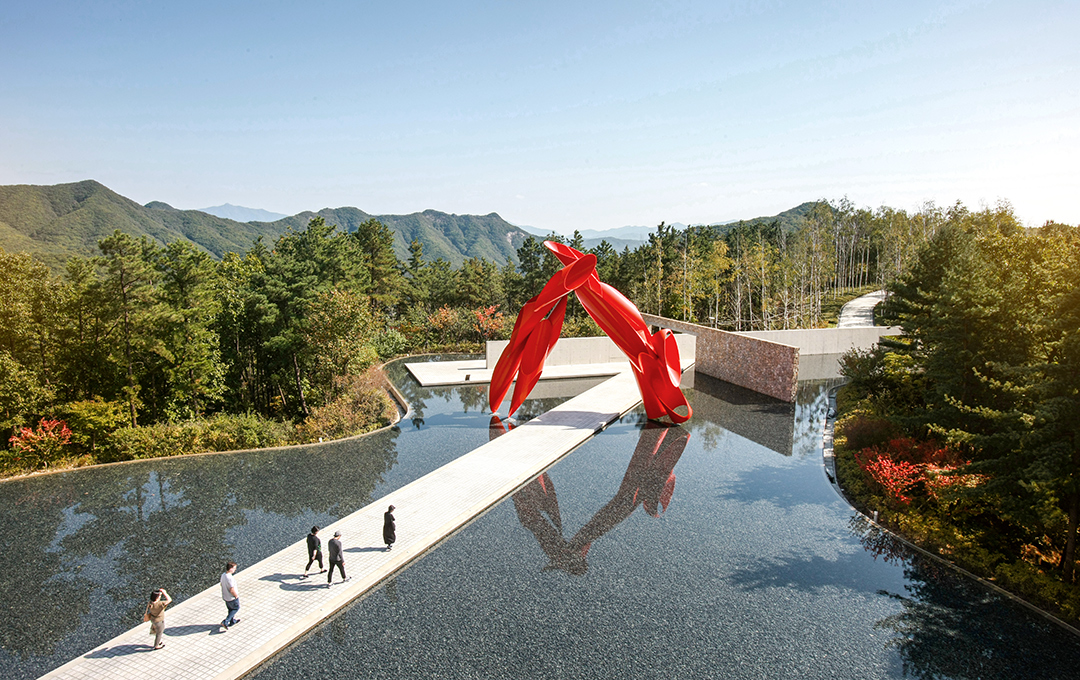 The Water Garden. On a clear day, beautiful surroundings will be reflected on the water. © Museum SAN

Following the birch grove and a small wall, you reach the Water Garden and the museum building. The shallow pool in the garden reflects the surrounding landscape and the main building on its calm surface. The reflection fabricates an illusion of the concrete structure floating on the water, creating a mystical atmosphere. (The water is drained in winter for safety reasons.) On a passageway crossing the garden majestically stands “Archway,” a gigantic red sculpture by Alexander Liberman. You may finally realize then that you are in a museum as you face the most unnatural and disparate object of geometrical shapes in the Museum San. 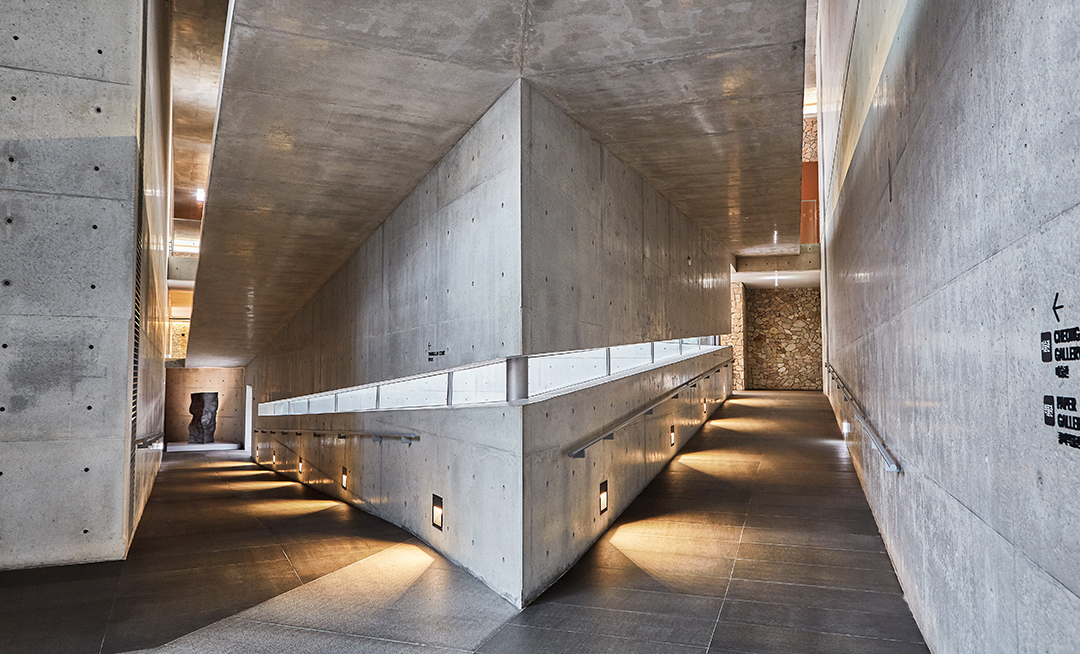 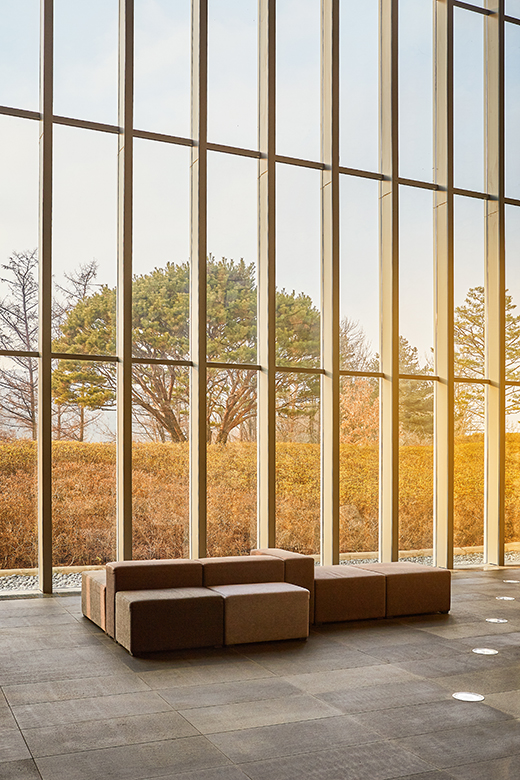 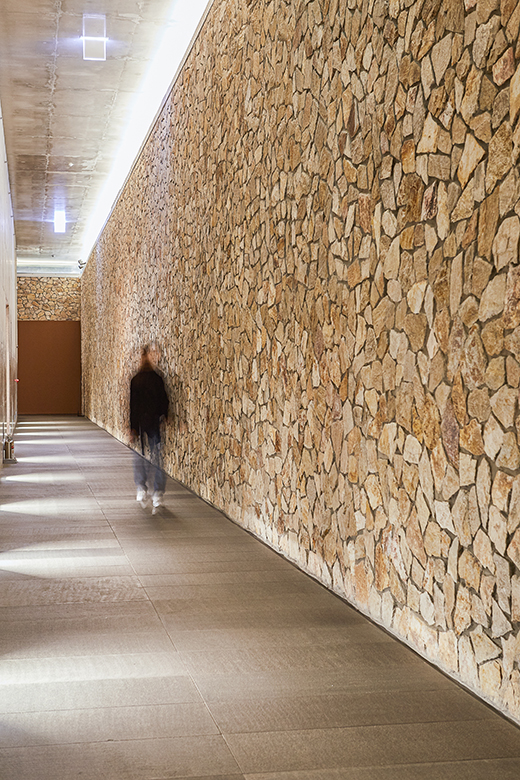 Inside the museum, featuring exposed concrete and large windows

Appreciating Art From Inside
Walking into the museum with the grayish façade using Paju stone, it becomes clear that Ando intended to incorporate nature in the building design. The interior of the museum adopted the “box in box” concept which means an exposed concrete box structure is contained within a stone structure forming the outer walls. A set of small windows between the stone wall and the eaves let in natural light enough to illuminate the gray hallways inside, while allowing those in the building to get a glimpse of the beautiful landscape outside through them. The simplistic structure made of Paju stone and exposed concrete walls is in such a fine tune with nature that each season experienced from within the museum is visually pleasing in a unique way. The museum offers bench seats in front of its larger windows for visitors to take a break. It’s another type of relaxation to admire the surroundings while sitting there, and one of many methods to fully appreciate the work of Ando. 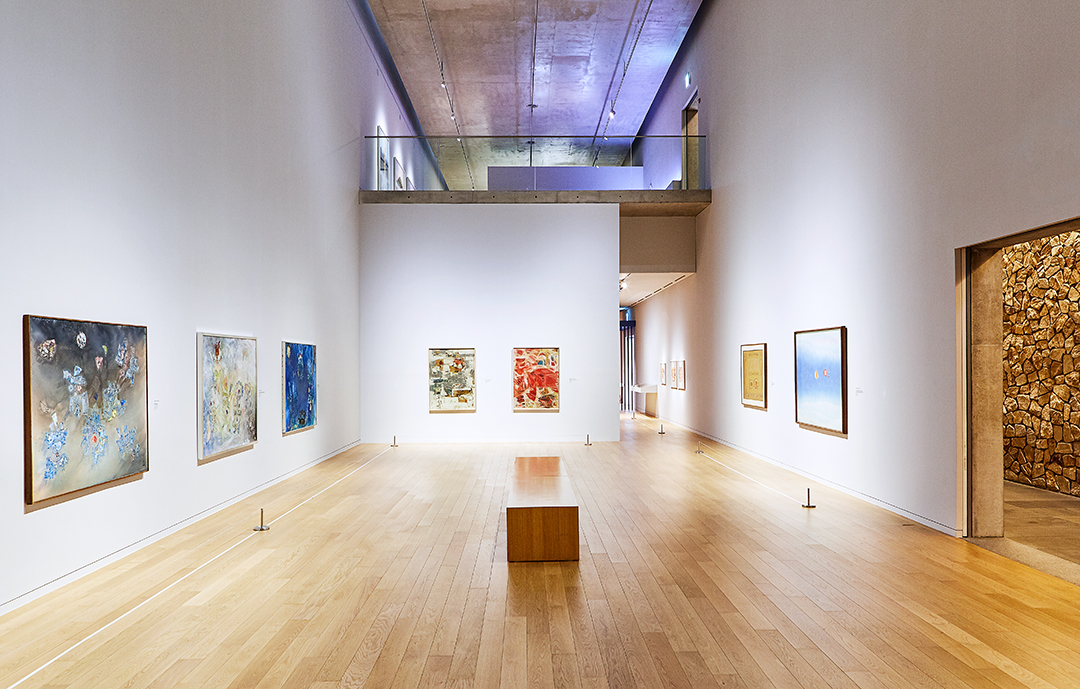 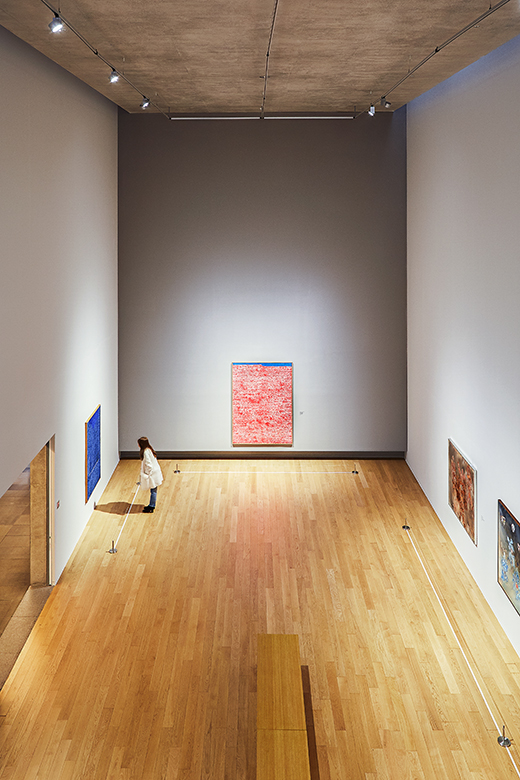 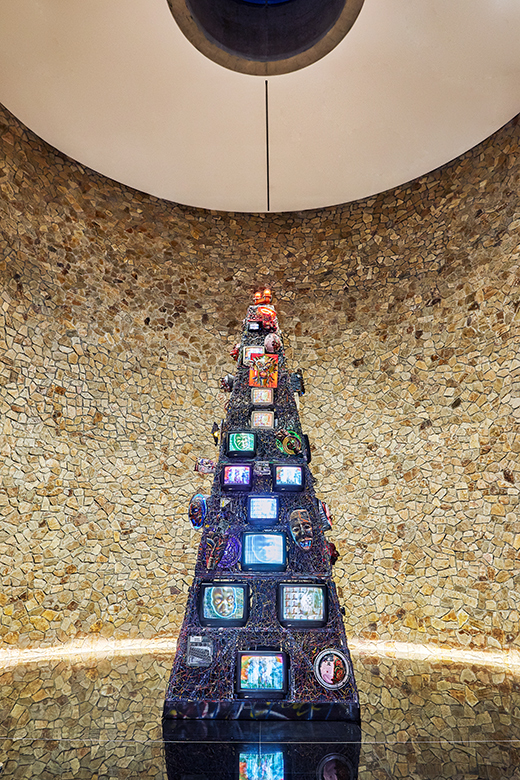 The museum has two stories, consisting of the Paper Gallery which used to be the Hansol Paper Museum, the first museum in Korea dealing exclusively with paper, and the Cheongjo Gallery where special and permanent exhibitions are held. Currently, “Looking into Korean Art V: Abstract Painting” is ongoing, featuring artworks by Whanki Kim, Nam Guan, Ryu Kyung-chai, Moon Shin, Yoo Youngkuk, and Seund Ja Rhee, all pioneers of Korean abstract art. There are other artworks available for viewing and owned by the Museum SAN, such as “Communication Tower” by Nam June Paik. Keep in mind that Paik’s media art is located in a separate space. 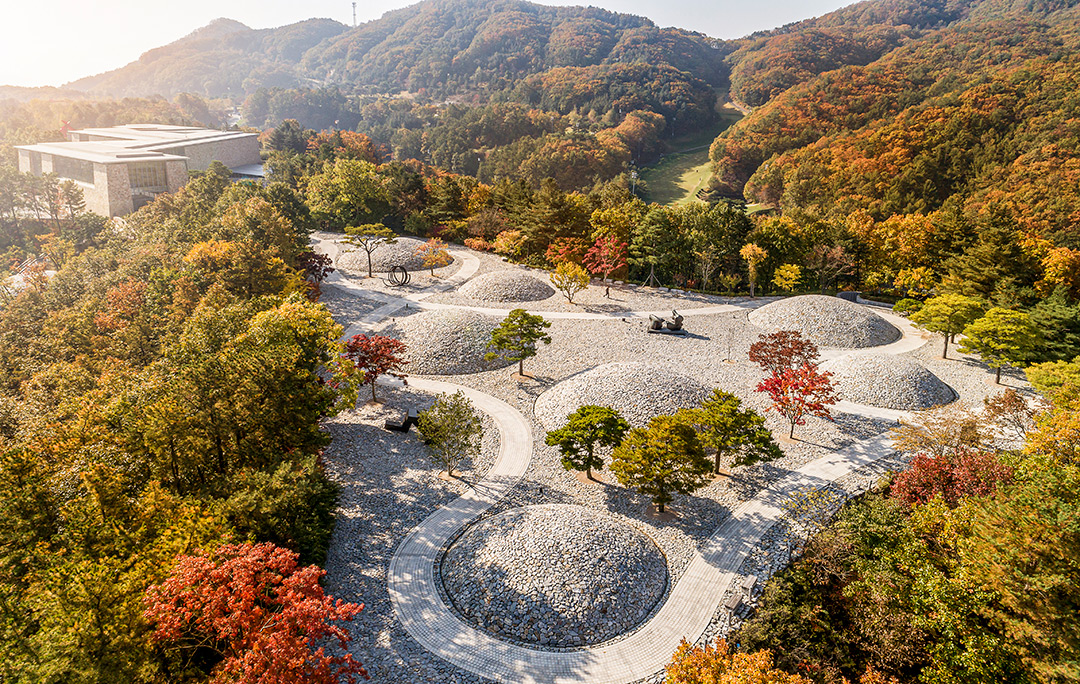 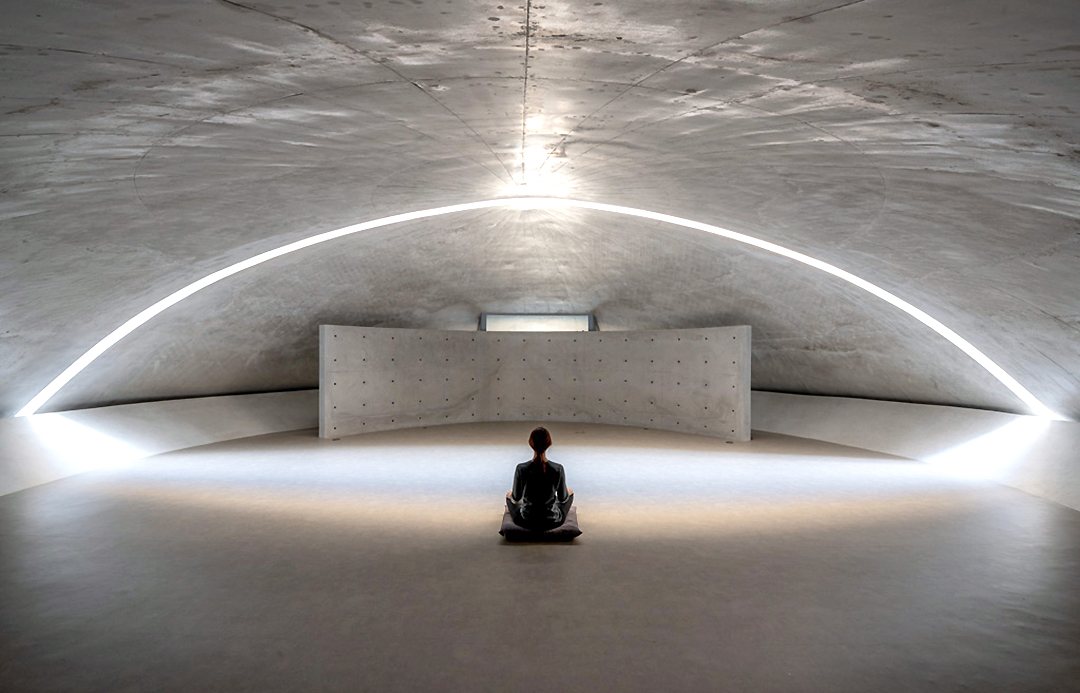 Behind the museum is the Stone Garden featuring Ando’s stone mounds inspired by ancient tombs from the Silla dynasty in Gyeongju. The Meditation Hall, built to commemorate the fifth anniversary of the grand opening, is also in the shape of a stone mound. The sunlight shone through the narrow crevice in the center of the hemisphere and the resonating sound inside creates a pious atmosphere. There are regular and special programs available at the Meditation Hall. 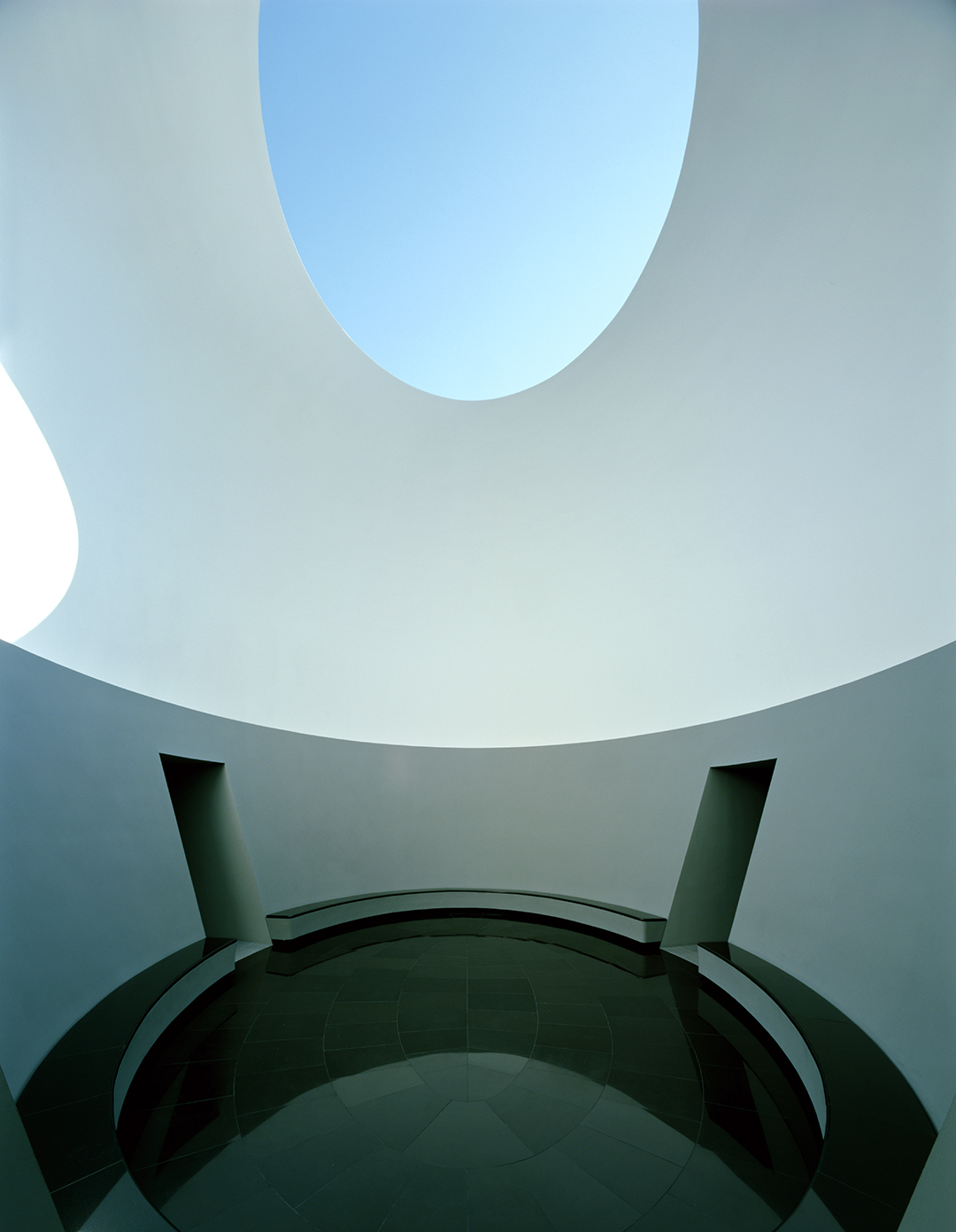 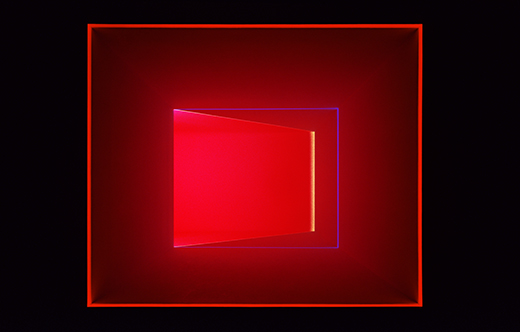 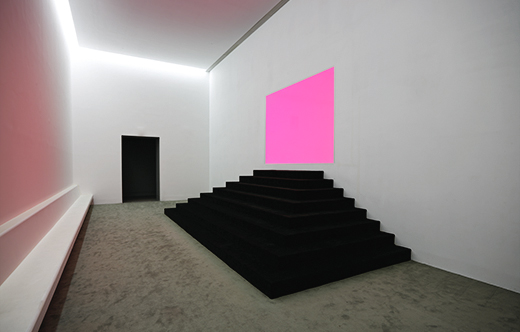 Space Dedicated to James Turrell
Past the Stone Garden is a space dedicated to James Turrell, the last one on the site of the Museum SAN. James Turrell is a world-renowned installation artist, famous for his light and space art. The exhibition space presents five of his works and limits the admission hours and number of spectators to help them become fully immersed in the art.
“Skyspace,” the first one of Turrell’s works, is an oval-shaped opening on the ceiling of a dome. As the sky viewed through the opening transforms depending on the time and weather, it naturally is perceived as a work of art. His other works include “Horizon Room,” “Ganzfeld,” and “Wedgework.” Experiencing light in a controlled space created by Turrell makes you rethink about the act of seeing. Exiting the James Turrell exhibition, you will likely feel you are waking up from a dream. 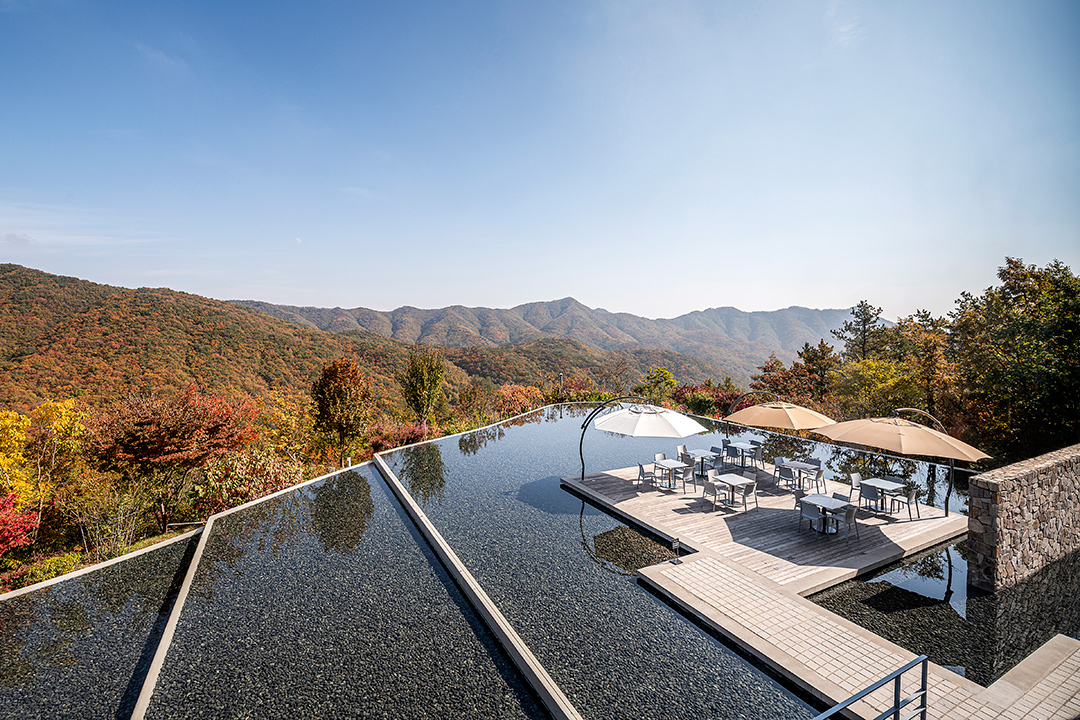 Place to Recharge Oneself
After finishing the viewing of James Turrell exhibition, you take the same route back to the Welcome Center via the Stone Garden, Museum, Water Garden, and lastly the Flower Garden. The return route will allow you to have a more relaxed attitude to look around the museum site. You can enjoy a conversation with your company over a cup of coffee at a scenic café. If you are alone, it will be a great opportunity for you to have a little “me time” away from ordinary life. Through the experience, you can rediscover your creative side and recharge yourself. Tadao Ando said about the Museum SAN, “I wanted to turn the entire site into the Museum not just the buildings — a place where both adults and children can spend a special day to enrich their sensibility for art and nature, newly discover themselves and regain the energy for life. Has this dream of mine come true?” To answer his question, visiting the Museum SAN is like choosing to be isolated or walking into the mountain. In other words, it is the best way to recharge yourself without doubt. 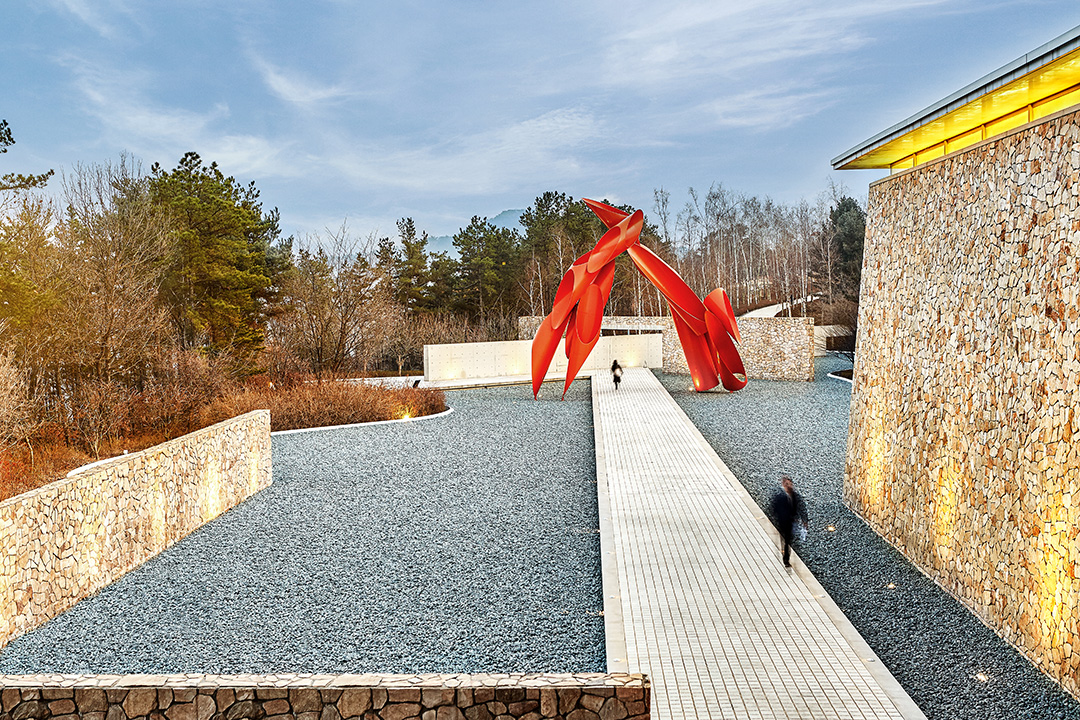 The museum sits in the mountains. Once the sun goes down, the area gets dark soon, too.