When Vineyard Meets Art, Donum Estate
There are wineries that own and display high art. But it is a rarity that a vineyard places equal emphasis on wine and art. The Donum Estate located in Sonoma Valley, California, is doing just that.
It is a 40-minute drive to the north from San Francisco after crossing the Golden Gate Bridge. When you find yourself surrounded by green fields on rolling hills, you have reached Sonoma. One of California’s top wine-producing regions along with Napa Valley, Sonoma Valley is famous for its pristine natural environment where Pinot Noir, often served at official dinners attended by the U.S. president, is produced. The Donum Estate is widely known among wine aficionados as well as art lovers thanks to its display of sculptures by world-renowned artists in the vineyards spanning over 810,000 square meters. 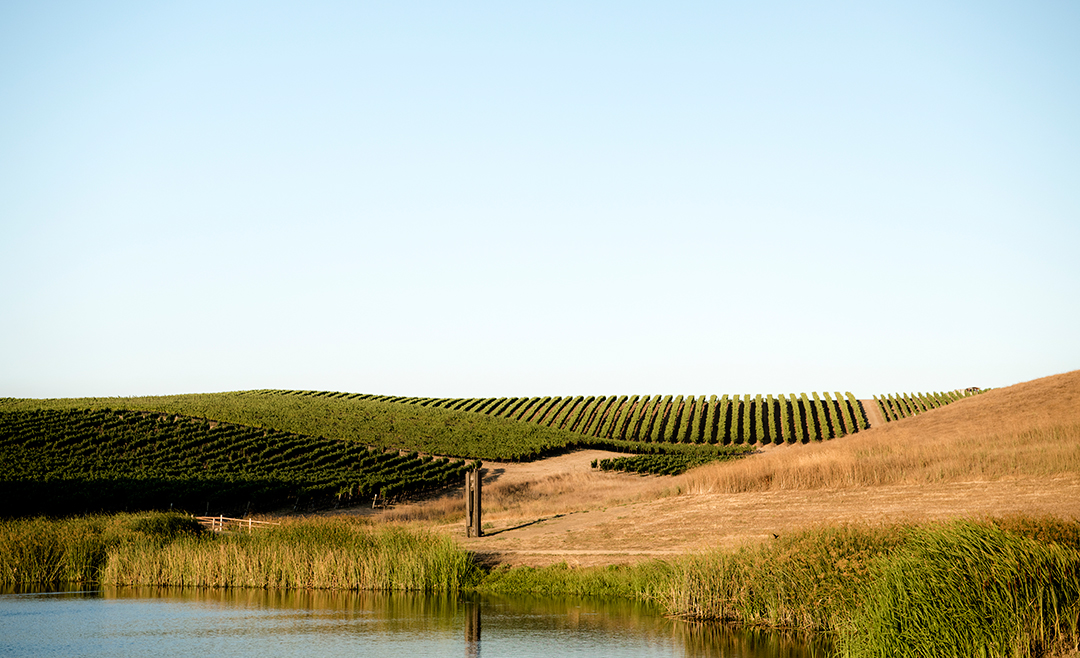 ‘Composition with Long Verticals’ by Mark Manders stands in the heart of a peaceful winery. / © Gregory Gorman Courtesy of The Donum Estate

“I wanted to create a place where artists from all over the world can express themselves.”
Allan Warburg
Established Entrepreneur Opens His Eyes to Art
Allan Warburg , the majority owner of the Donum Estate since 2010, has a peculiar background. Born in Denmark, he had traveled to Asia with his open-minded parents, which helped him understand the charm of exotic cultures at an early age. While studying business at Copenhagen University, he learned Chinese language and later even enrolled at Yunnan University. After mastering Chinese, he got a job in trading business and settled in China. His entrepreneurial tendency was discovered then. In the mid 1990s he detected the potential of a European-style fashion business in a slowly-changing market of China. He and his friend partnered with a Danish fashion company and launched that brand in China. They were virtually the first market player to introduce western fashion to China. The brand grew exponentially several years later and began taking in other established apparel makers. As a result, he became a business tycoon in charge of 7,000 stores in all of China, Hong Kong, Taiwan, and Malaysia, and some 50,000 employees.
It would have been an entirely different story if Warburg had lived in a Scandinavian city. However, he was in Beijing in 2000 when China was welcoming changes, and ultimately became a living witness to the transformation that took place in China’s contemporary art circle. Old electronic plants and munitions factories were turned into art studios and galleries, and the creativity of Chinese artists exploded in them. Fascinated by the extraordinary energy in the art industry, Warburg started collecting art pieces and built relationships with the artists. At the time, he was a wine lover who enjoyed the Donum brand and rookie art collector. 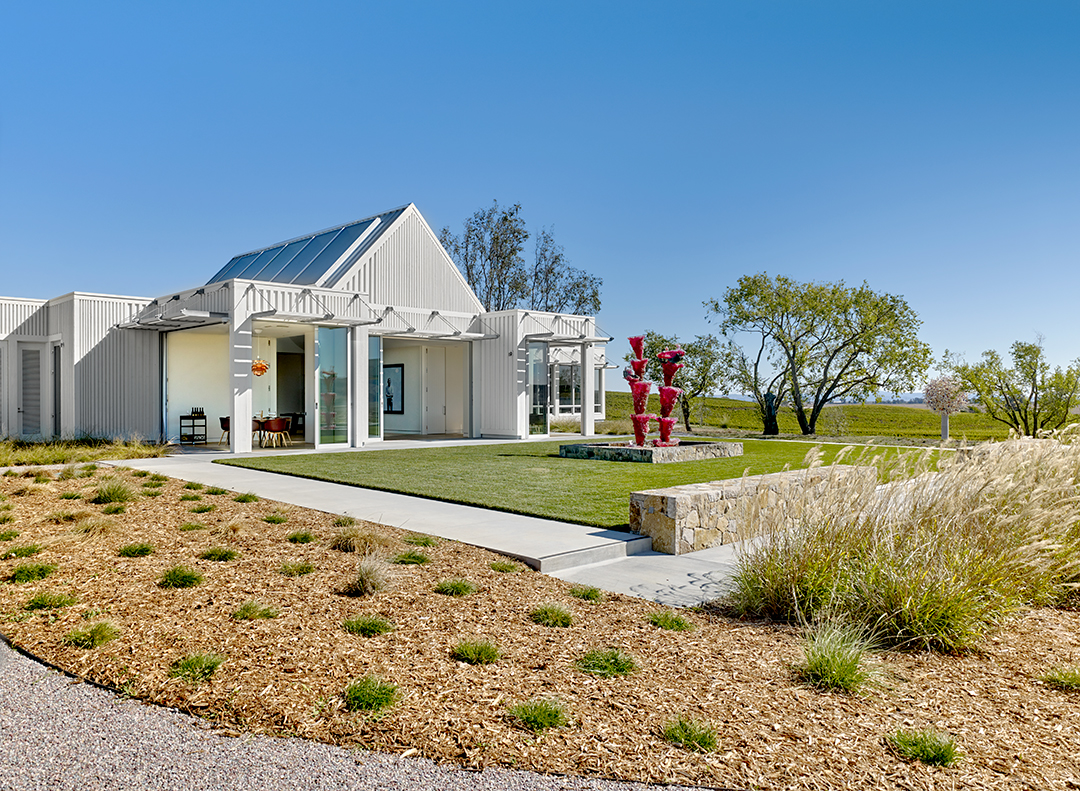 Introducing Art to Vineyard
There came another turning point. A wine trader who knew him well gave him news that the Donum winery in Sonoma was up for sale. His entrepreneurial instinct kicked in once again. He knew it was too good an opportunity to pass up. The land had certainly been productive for high-quality wine making, and the price wasn’t too high considering that. He thought he could flip it after some time and gain profit. The new Donum winery under the ownership of Allan Warburg finally opened in 2011. 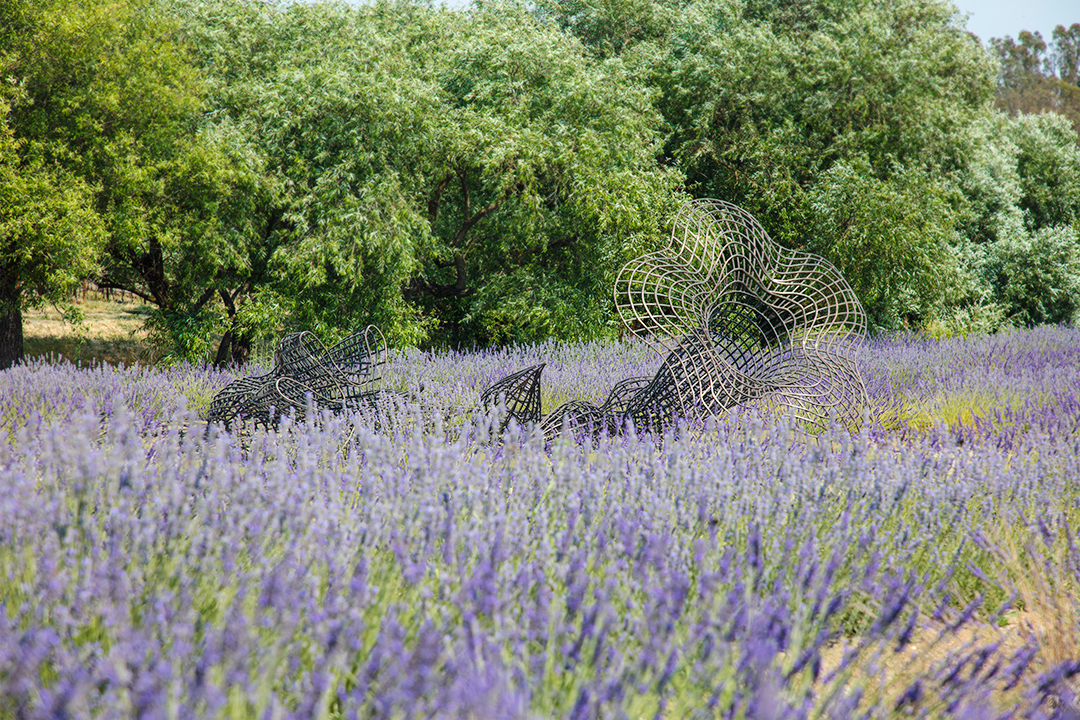 It was some time after that the name “Donum,” meaning “gift” in Latin, felt more like destiny than an accident. His mind took an unexpected turn. Having his fashion business based in Asia, he maintained his residence in Hong Kong and visited Sonoma only a handful of times a year. Each time, the winery inspired him with different sceneries and natural world. Having been occupied as the site of a dairy farm a long time ago, the land had gentle rolling hills, small lakes, and old cattle pens. Besides, olive trees that are aged over 100 years, fragrant lavender fields, and a lush eucalyptus grove rendered the place one-of-a-kind. The fact that it is at a crossroad where more than 200 species of migratory birds fly through every year also felt like more than just a coincidence. He had a hunch that incorporating sculptures into the wide open field of California where the sun shines throughout the year would entice not just wine admirers but art fans to come to the winery. 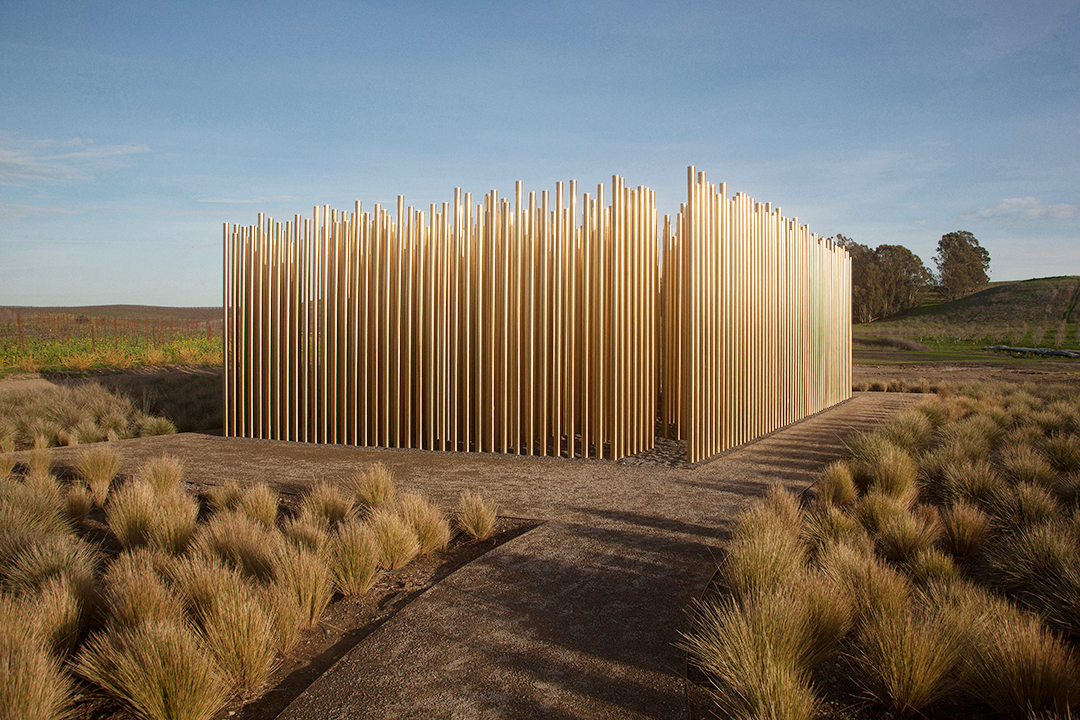 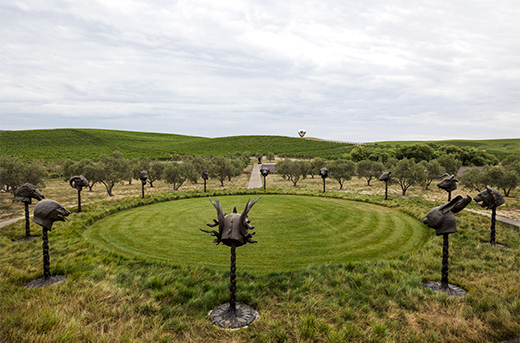 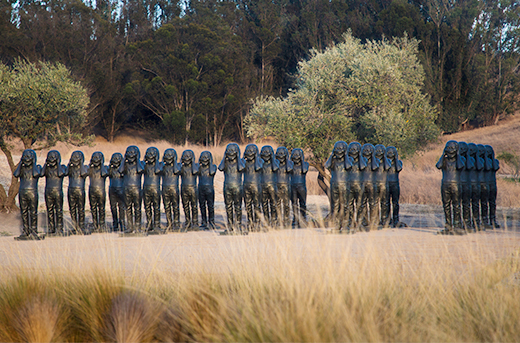 Voices of Artists Resonating Through Vast Nature
He first paid attention to Chinese contemporary artists he had already established relationships with. It was a natural choice for him considering that his first-ever personal sculpture purchase was from Zhan Wang, a Chinese artist known for his surrealistic, figurative sculptures. Near the entryway to Donum stands Circle of Animals/ Zodiac Heads(2011) by Ai Weiwei, a world-class sculptor representing Chinese contemporary art. The iconic works, symbolizing the 12 animal gods in Chinese tradition, stir interest among spectators with a horse head resembling a chess piece. Zhan Wang’s work titled Artificial Rock No. 126(2007-2013) stands tall in the center of the vineyards, mirroring the sunlight shone on its rugged surface. The sculpture was intended to create a synergy effect with the surrounding natural elements. Yue Minjun’s Contemporary Terracotta Warriors(2005) portrays a collective social anguish masked by exaggerated smiles on the faces of bronze statues, forming a contrast against the rows of olive trees nearby. Gao Weigang’s installation titled Maze(2017), on the contrary, becomes part of the landscape as the artwork reflects environmental changes such as light and the weather conditions at the time of observation. 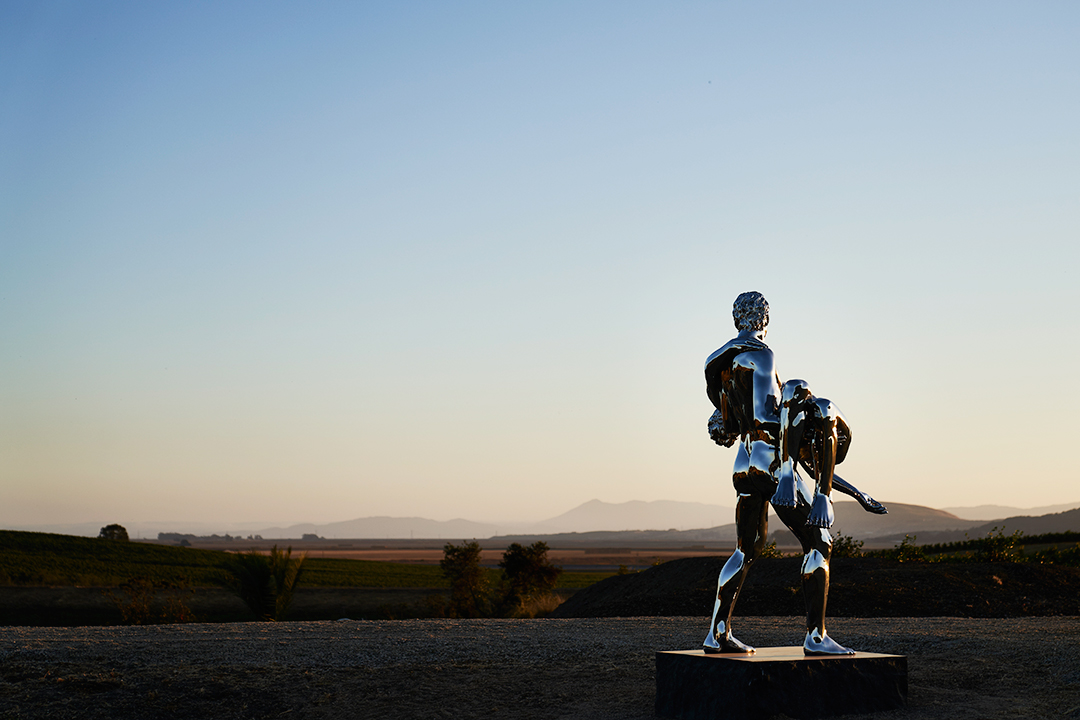 Donum’s sculpture collection reveals the open-minded tendency of the owner who has shown great interest in foreign cultures. He believes art is how we can connect different cultures. “I wanted to create a place where artists from all over the world can express themselves.” Allan Warburg made the remark in 2018 when he officially launched Donum’s Sculpture Collection of 40 or more creations. 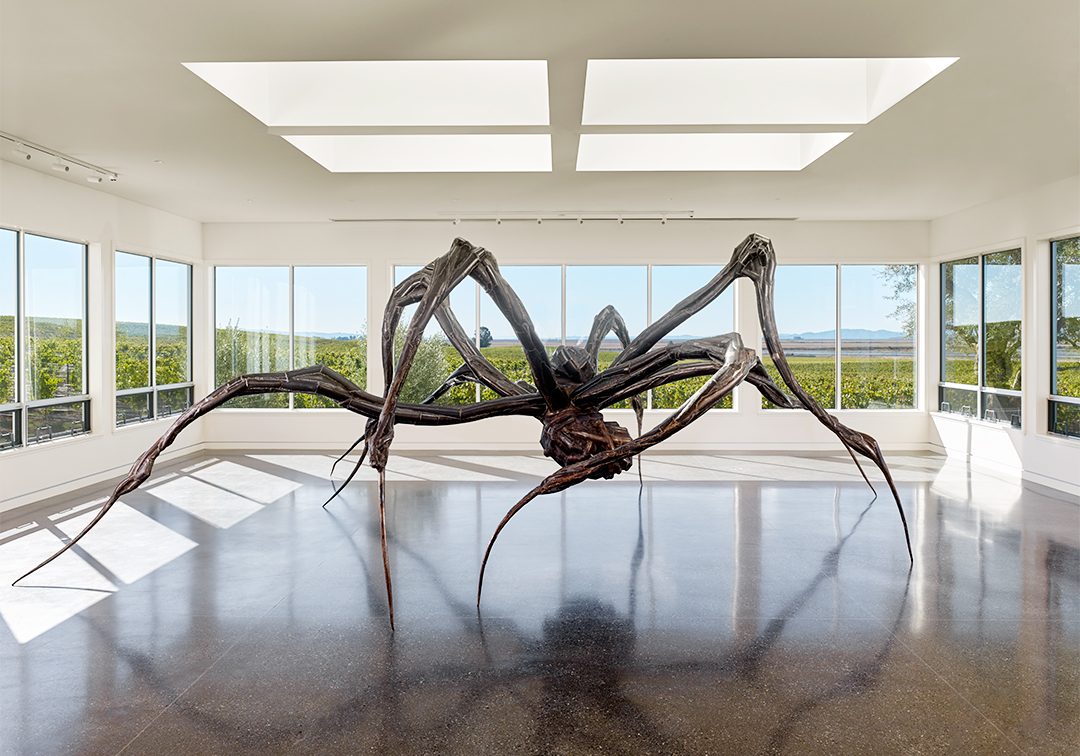 At the Donum Estate, each of the contemporary artworks from China and various cultural areas around the globe has a commanding resonance. Crouching Spider(2003) by Louise Bourgeois, a French-born artist currently hailed as the greatest female sculptor of the 20th century, sits in the middle of the vineyard as if guarding the property. (Considering the fact it is made of steel, it has an independent exhibition space.) By the tranquil lake stands The Care of Oneself(2017) by Scandinavian duo Elmgreen & Dragset that depicts the self-portrait of a modern man by mimicking Michelangelo’s “Pietà.” British artist Richard Hudson installed Love Me(2016), a gigantic heart sculpture, at the highest point of the vineyards so that it could embrace the surroundings that are mirrored on its surface. 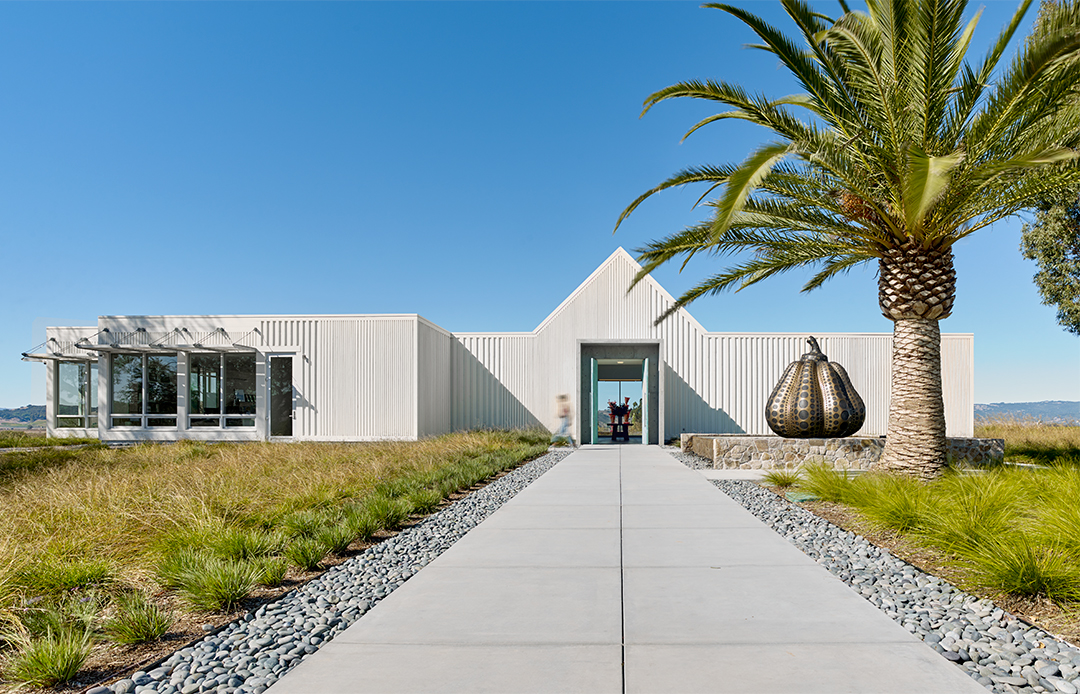 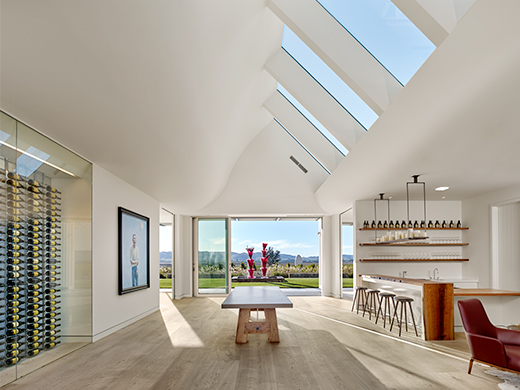 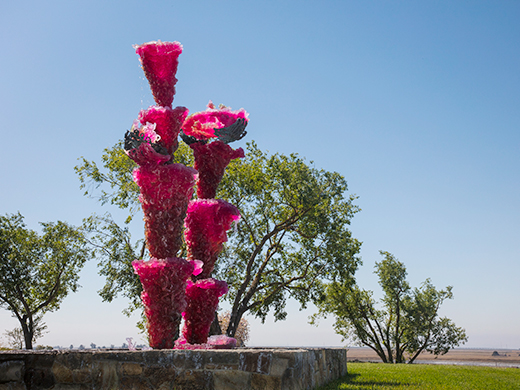 Artists in Tasting Room
Donum’s Tasting Room plays a supporting role in diversifying the art collection. It is located in a simplistic white building designed with the farmhouse which used to be in the winery in mind. Yayoi Kusama’s black-and-gold Pumpkin(2014) occupies the front yard. Pink Ladies(2014) by Lynda Benglis draws attention in the backyard with the candy-colored fountain. On the interior white wall are the self-portrait by Yue Minjun, a large oil painting by Liu Xiaodong, and Tracey Emin’s neon installation piece. If you are a fan of Emin who is considered a leading member of Young British Artists(YBA) that revitalized contemporary art in Britain, you should check out her bronze sculpture titled All I Want is You(2016) placed near a lake in the property according to the artist’s wish. Completed in the year that her mother passed away, the autobiographical work carries the feeling of sorrow and sense of absence after the loss of a loved one. 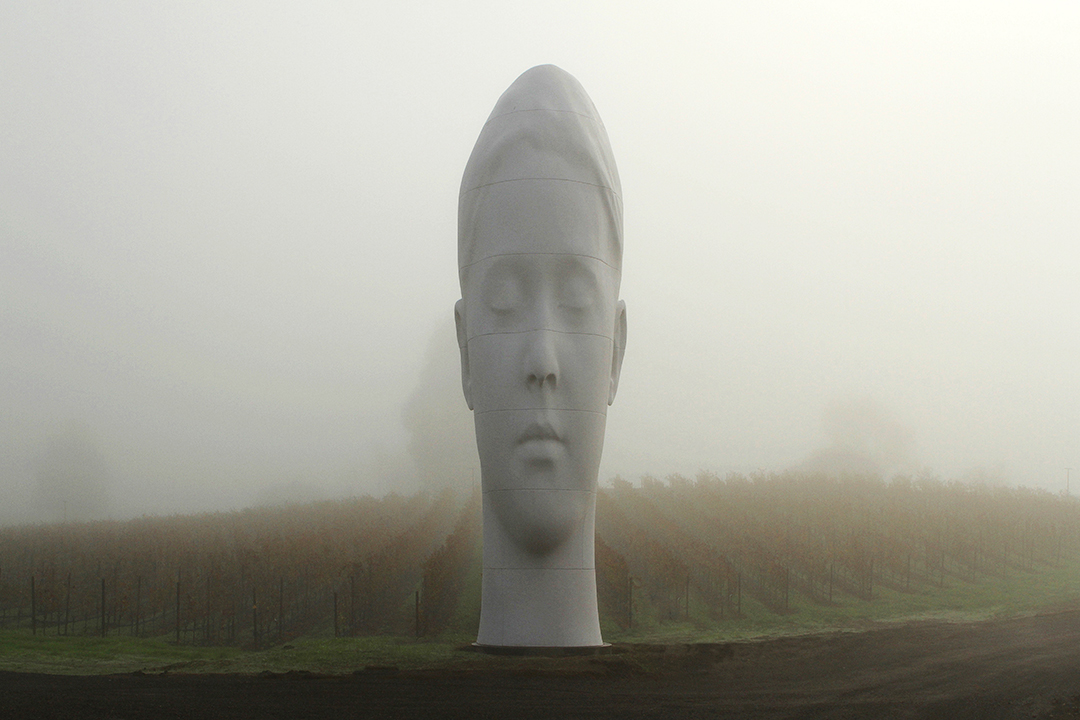 King and Queen(1987) by the famous Keith Haring opens your eyes to the artist’s lesser-known aspect if you are only familiar with his colorful and playful drawings. Poppy and Memory(2017) by Anselm Kiefer reminds you of the brutality of the war, using the warplane replica. Sanna(2015) by Jaume Plensa is a giant white fiberglass face of a girl portraying the fleeting moment of beauty. People Tree(2017) by Subodh Gupta is a banyan tree made of steel products used everyday in an ordinary Indian household. The latest works by these contemporary artists in the spotlight make Donum a more vibrant art scene. 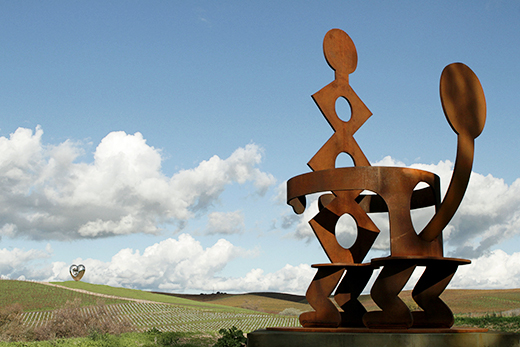 Showing the artist’s unique sense of humor, ‘King and Queen’ by Keith Haring © Anthony Laurino Courtesy of The Donum Estate 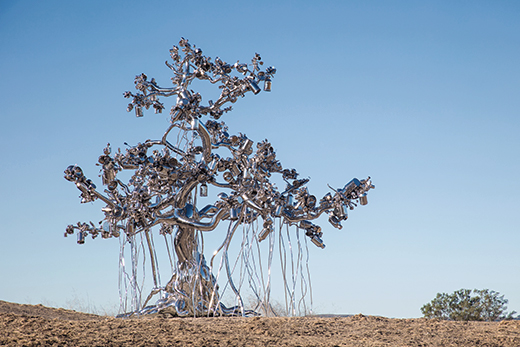 Noteworthy is the fact Donum is adding more site-specific artworks to its collection. Most recently, American contemporary artist Doug Aitken placed a massive installation piece designed for Donum. Titled Sonic Mountain, Sonoma(2019), the wind chimes create varying music each time they interact with the vast natural elements of Sonoma. In time for the announcement of the Aiken project, Donum published a collection book introducing its 40-plus sculptures. 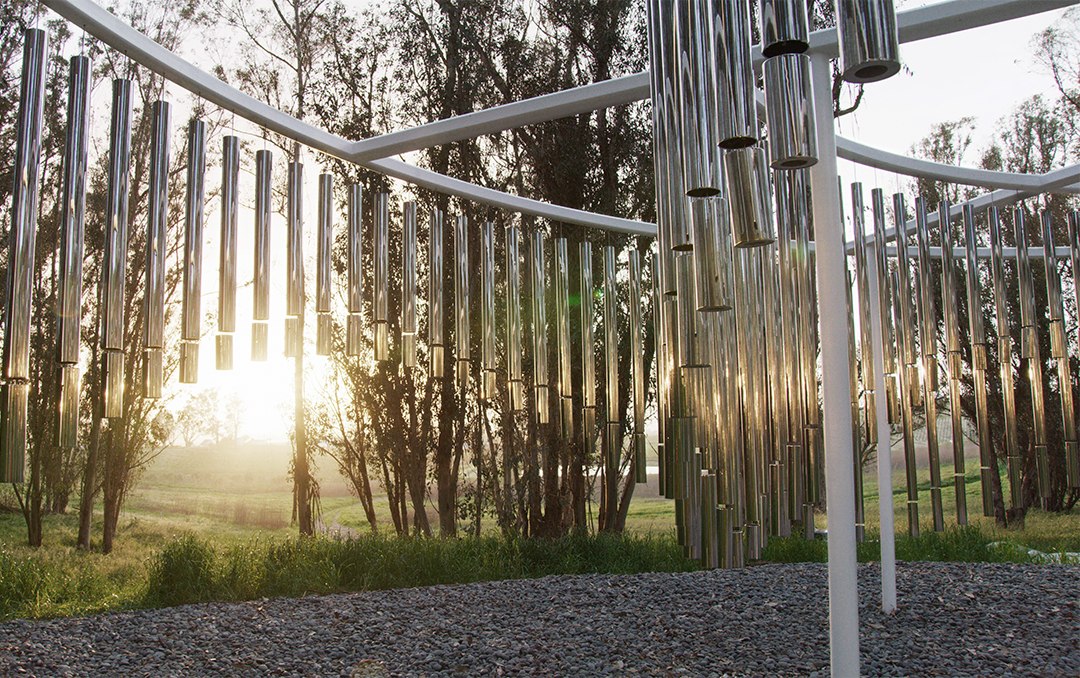 “In many cases, good things in life come by accident.”
Allan and Mei Warburg said so. Thinking about it, don’t we enjoy a moment of true happiness when we get out of our comfort zone, and try something new, expanding the horizon of our senses and thoughts?
As art and nature brought long-lasting happiness to the Donum owner, visitors to the estate will also share some of the prized senses. Donum holds wine tasting and sculpture park tours for small groups that book in advance.