Between Calm and Passion, Seattle Central Library vs. Museum of Pop Culture
Seattle has two famous structures: the Seattle Central Library by Rem Koolhaas and the Museum of Pop Culture by Frank O. Gehry. The two are both cultural spaces but they differ vastly when it comes to the architects’ perspectives on their creations.
Let’s examine your knowledge of Seattle. You may ignore Starbucks and Pike Place Market. As shown in the movie , the city often sees overcast skies and has an expansive natural space such as Olympic National Park. At the heart of it though there are IT giants like Microsoft and Amazon that have their headquarters in the city, attracting global talents. Moreover, it is where legendary guitarist Jimi Hendrix was born and numerous rock bands including Nirvana, Pearl Jam, and Alice in Chains were based. Cutting edge and provocation coexist in Seattle. There are two landmarks that also make Seattleites proud. They are the Seattle Central Library and the Museum of Pop Culture. 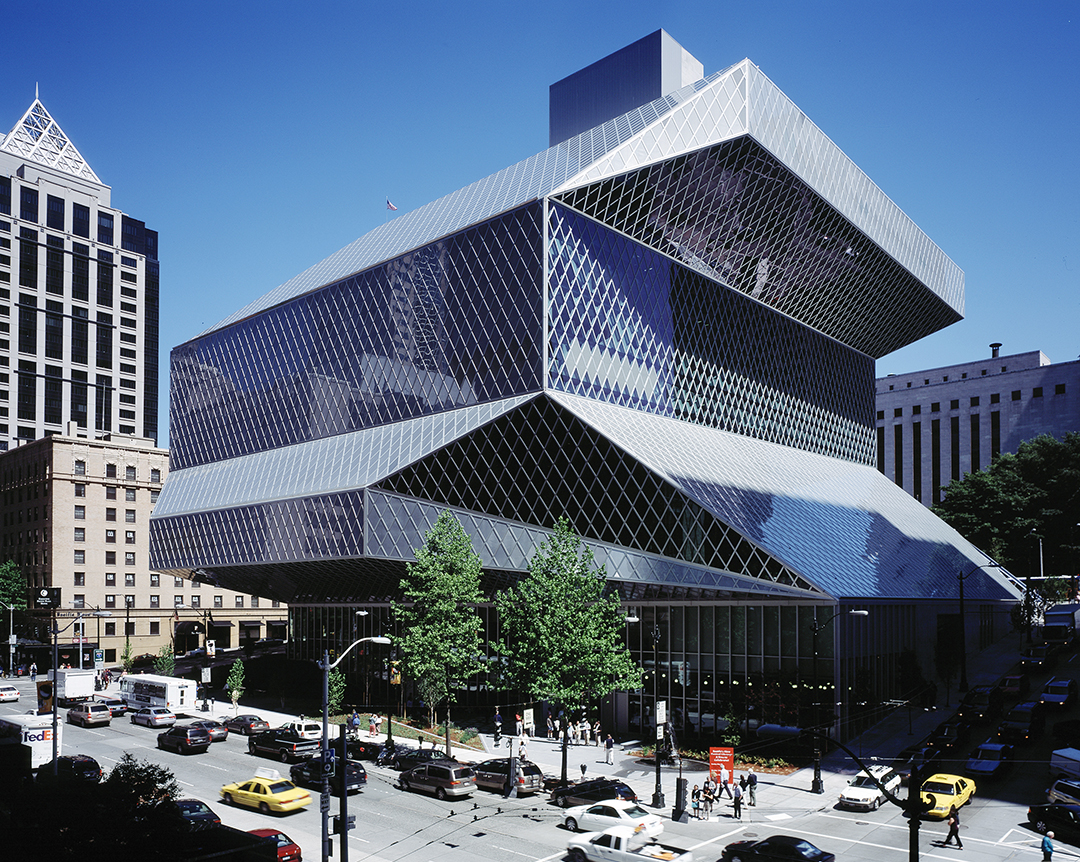 Structure Based on Theory, Seattle Central Library
The Seattle Central Library is considered the iconic building of the Seattle Public Library and is located in downtown Seattle densely packed with office buildings. When the original space became too small, the library held a fundraising under the slogan of “Library for All” in 1998 with an aim to build a new structure. The astronomical figure collected through the fundraising included 20 billion won donated by Bill Gates of Microsoft. Amid the growing expectation and interest by the public, Rem Koolhaas with the Office for Metropolitan Architecture(OMA), a Dutch architectural company, was put in charge of the design. Koolhaas, who has received the most honorary Pritzker Architecture Prize, is currently working on the second building of the New Museum in New York which is getting a lot of spotlight. The Seattle Central Library is one of his representative works.

The unpredictable, asymmetrical form of the library building © Shutterstock 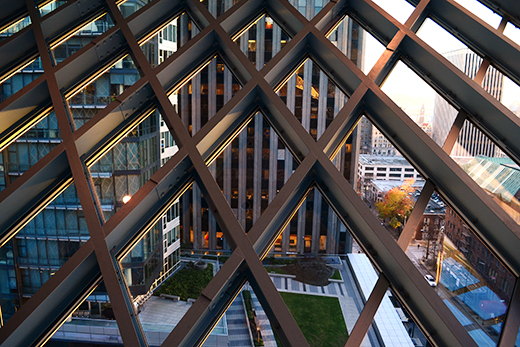 The diamond-patterned mullions serve as windows inside © Shutterstock

Let’s take a look at the exterior of the building first. If you don’t know the story behind this architecture, you might think the designer wanted to gain attention. But it’s Rem Koolhaas we’re talking about here. If designing a building is done in the order of sketching the exterior and then stuffing in the content, he works in the opposite way by assessing what will happen in the building first, outlining the content, and then adding protective walls which will determine the design. Therefore, the jagged look of the library is the result of the architect prioritizing the flow and activities of library patrons. 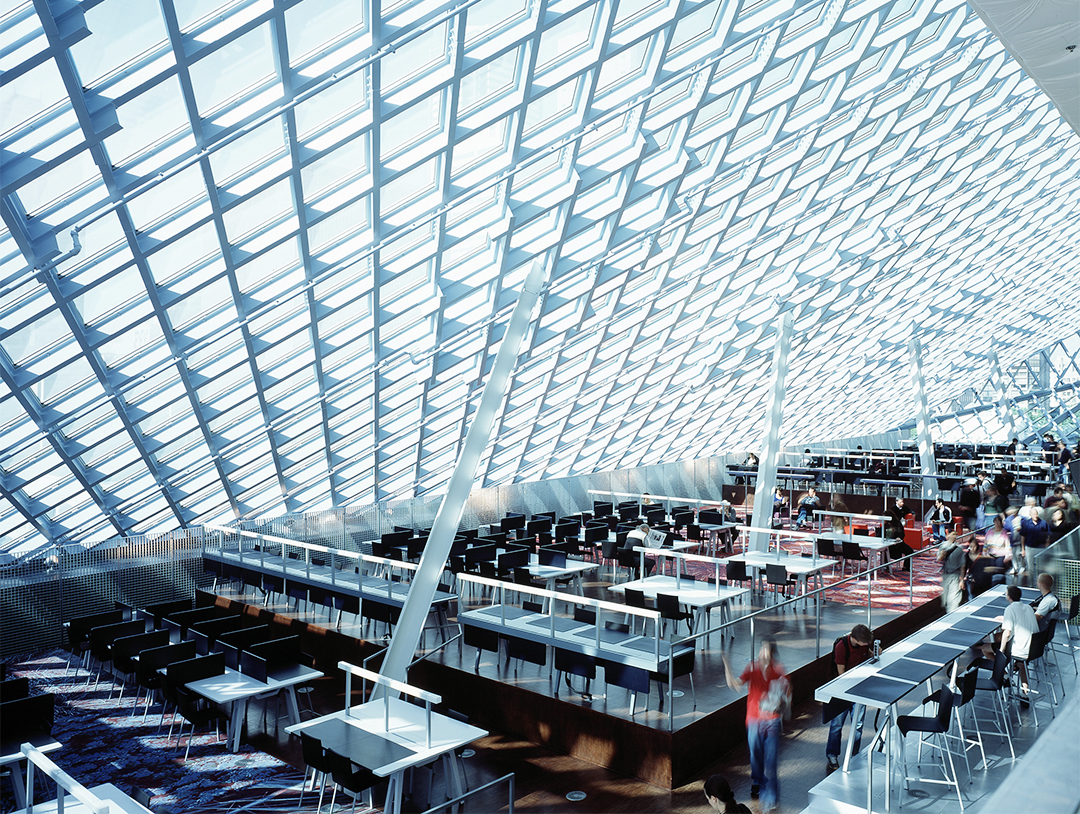 “I think the architecture of OMA will bring happiness to many people. Not because we told them to be happy, but because we got rid of various limitations for them.” As Koolhaas once said in an interview, people do get to experience a unique kind of freedom in this library. 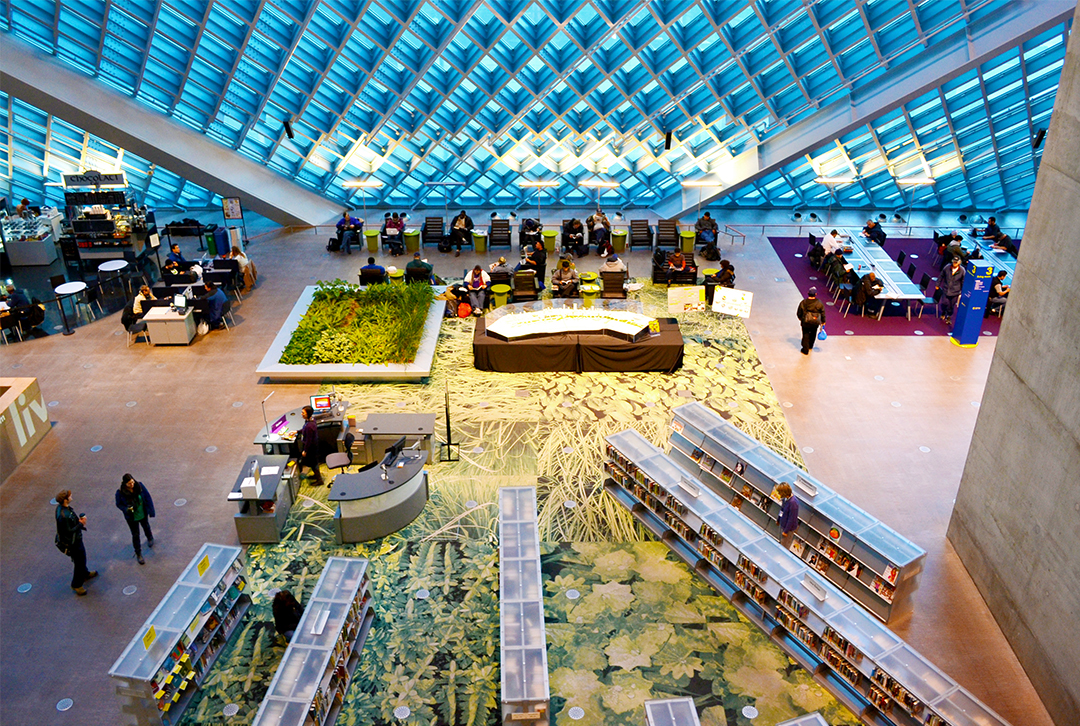 Library Leads Digital Era
When the library was being planned, mankind was about to enter the 21st century. Along with a solution to cope with the increasing volume of data and the number of users, the library had to rethink its role in the digital era. Koolhaas first began research together with his OMA colleague Joshua Ramus and Seattle-based architectural firm LMN. They learned people still turn to print media even in the digital era in which information is a few clicks away. They also agreed one of the key roles of the library in the future is to help people of all ages use various media that they identify with equally and easily and to provide them well-curated information. They planned a socially responsible library that enables people to interact with each other and handles various requests from them. 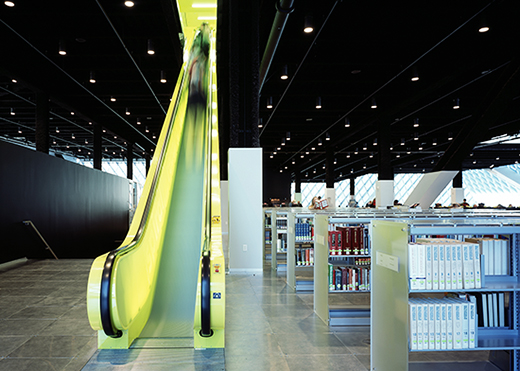 The light-yellow escalator is welcoming © Photograph by Philippe Ruault, Courtesy of OMA

The Central Library consists of 11 levels where five clusters are connected through four trading floors that layer partially on top of each other. The signature feature is ‘Book Spiral’ on levels 6-9 that displays the non-fiction selection. The continuous spiral ramp connecting the four floors allows people to browse through books organized using the Dewey Decimal System. This solves the conundrum of the existing libraries where floors divide the books in an unnatural way. The new library model emphasizes the role of the library staff. Librarians hoped they could more closely interact with the patrons and offer more professional help. The Seattle Central Library has set aside a space in the 5th-floor Mixing Chamber, which is like the heart of the library, for the staff so that the patron-librarian meeting can take place in a nice environment in a time-saving manner. Some other features of the library include: Library Lounge and Meeting Rooms functioning like a shared office; Computer Lab accessible via booking; automated sorting and delivery systems; changing views of the city depending on the location; and the whole place serving as a photo zone. No wonder it’s called a Seattle gem. 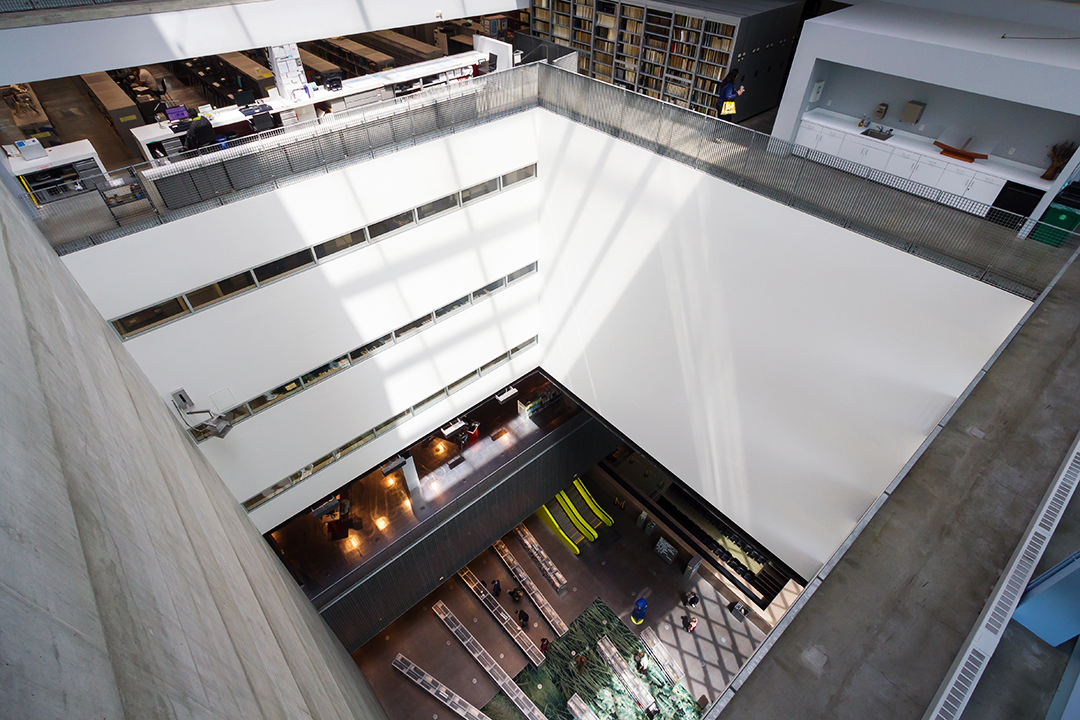 Intuition Directs Building Design, Museum of Pop Culture
Canadian American architect Frank O. Gehry puts emphasis on the artist’s intuition in building design. The Museum of Pop Culture, one of his signature projects, is located in Seattle Center where various cultural facilities are housed including the Space Needle. Also a recipient of the Pritzker Prize, Gehry famously designed the Guggenheim Museum Bilbao(1997) and the Walt Disney Concert Hall(2003) in Los Angeles. Last year, he unveiled Louis Vuitton Maison Seoul, his first work in Korea. Gehry’s architecture breathes in life to a rather boring cityscape with its sculptural shape. His dynamic creation thrills the public. 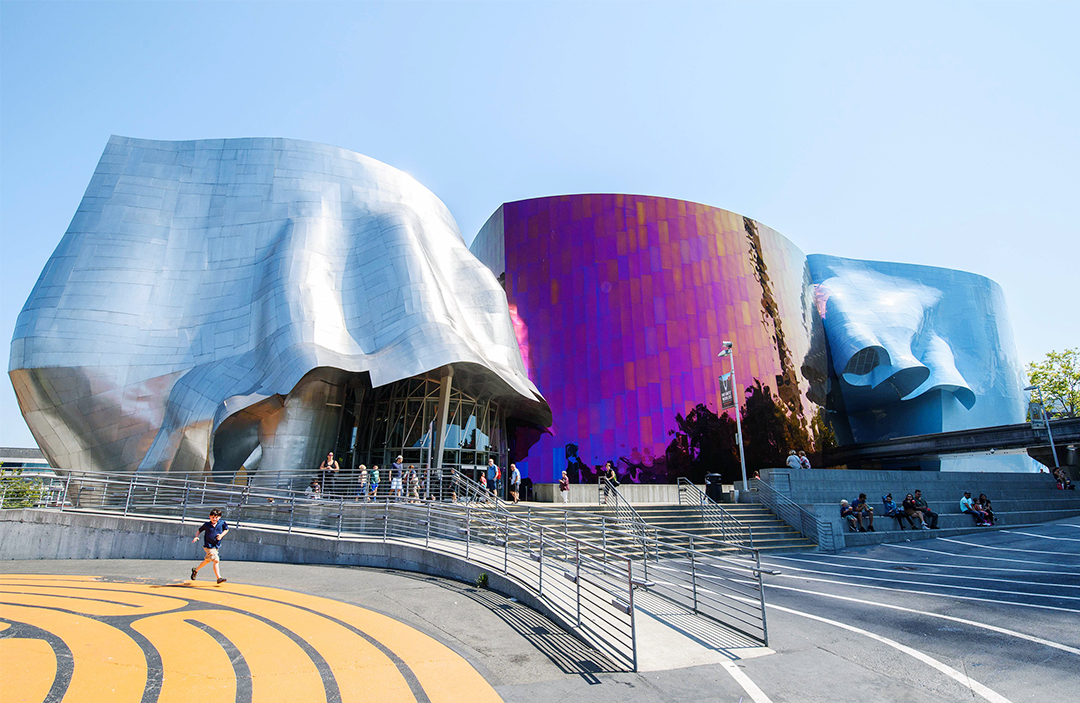 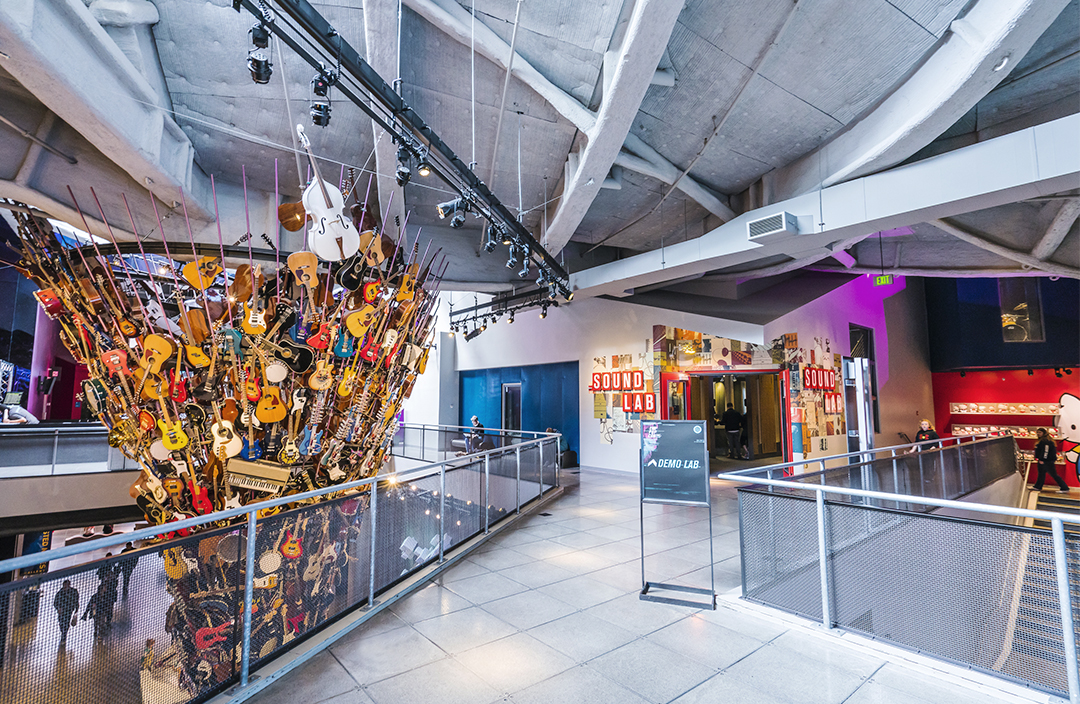 ‘IF VI WAS IX,’ a guitar sculpture stretching from Level 2 to Level 3 © Shutterstock

It was Microsoft co-founder Paul Allen who commissioned Gehry to work on the museum design. Allen, born and raised in Seattle, focused on his business and giving back to society after leaving Microsoft. The non-profit museum was one of his projects. Lately its name changed to include ‘pop culture’ for the purpose of becoming a more contemporary, public-friendly museum, it was originally called EMP(Experience Music Project) Museum. Before the opening, one of the tentative names was Jimi Hendrix Museum to honor the Seattle-born guitarist. The museum still carries many traces of Hendrix. 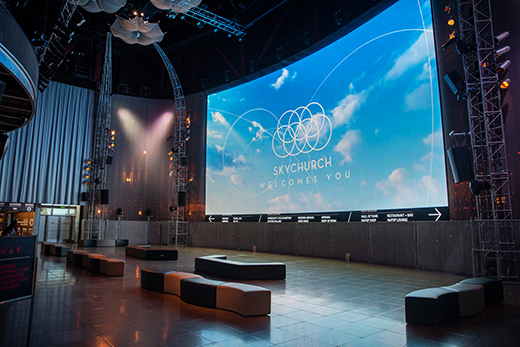 ‘Sky Church,’ a concert hall built in homage to Jimi Hendrix © Courtesy of The Museum of Pop Culture

Using Intuition to Appreciate Music and Architecture, Experience Explosion of Inspiration
The structure was designed to give off the raw energy of rock and roll. Gehry purchased dozens of electric guitars for his design concept and cut them into parts to create a giant building block. Inspired by the guitar shape, the museum has an explosive sensibility comparable to the moment when a musician, completely lost in his music, throws away the guitar at his concert. <Seattle Weekly> has commented harshly that the building seen from above is similar to a smashed electric guitar, and <Forbes> disparaged the museum, saying it’s one of the world’s 10 ugliest buildings. However, what you think of the structure is entirely up to you--the visitor. 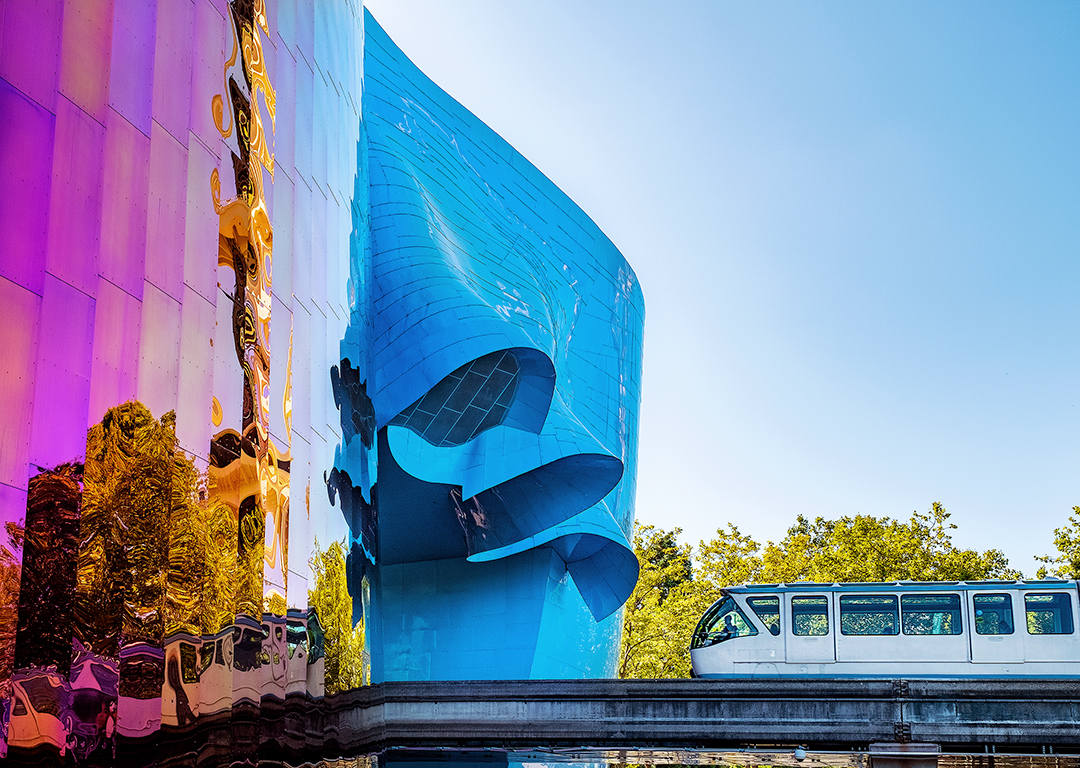 The wavy structure on the exterior was created by connecting 3,300 different panels on top of which 21,000 metal sheets were placed. According to an engineer who took part in the project, not one panel used the same pattern for assembly. He said it was the most complicated exterior he’s experienced. Diverse colors were used including gold, silver, red, blue, and purple with shimmer. For material, stainless steel, color-coated stainless steel, and aluminum shingles were chosen, resulting in myriad colors and textures. 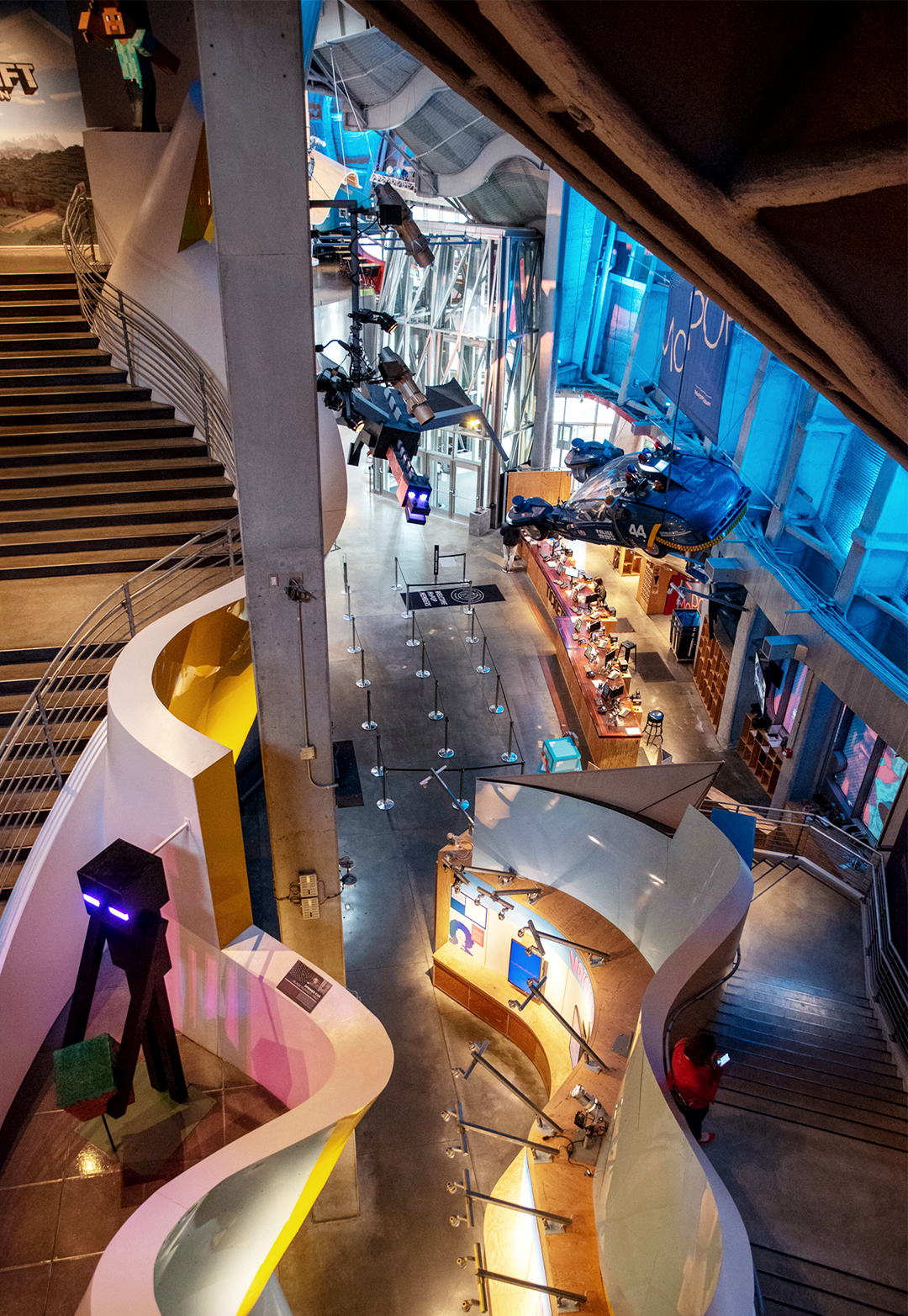 The inside of the museum is an extension of the organic shape of its exterior. © Courtesy of The Museum of Pop Culture

The roller-coaster fun continues inside the museum. A concert hall named ‘Sky Church’ pays homage to Jimi Hendrix and offers a space where people of all generations who are open to enjoying diverse cultures can gather to experience music, like he once wished. The hall, with a 26m-high ceiling and a gigantic HD LED screen, state-of-the-art lighting, and sound systems, is used for music concerts, film screenings, and performances. At ‘Sound Lab,’ visitors can try out instruments such as drums, guitars, and keyboards and even record their own music. There are also table-top instruments for those who are new to playing. The museum displays the memorabilia of Seattle-born musicians and their musical journey. Its programs are also innovative: ‘Sound Off’ is an annual 21-and-under battle-of-the-band, and ‘Pop Conference’ is a gathering of musicians, critics, and music buffs. 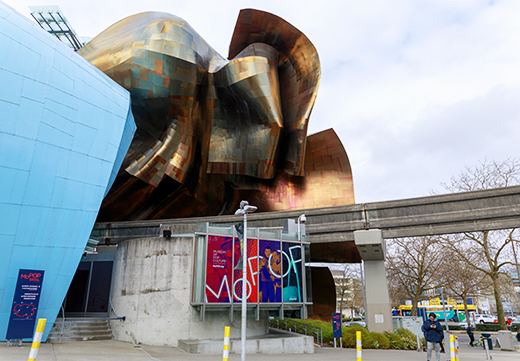 The west side of the building that greets the monorail © Shutterstock 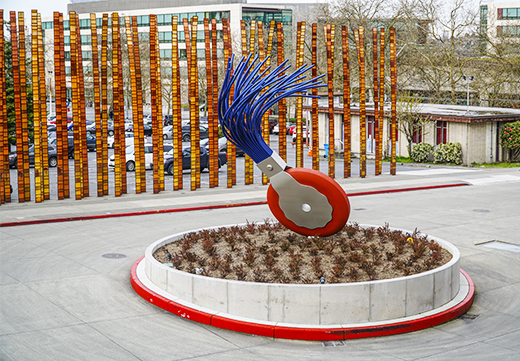 Commemorative sculpture outside the museum © Shutterstock

When he visited Korea last year, Gehry said about the role of art, “It is a valuable work to pull up a material from the inner self and materialize the undying feeling.” Despite the mixed views on the Museum of Pop Culture, one thing seems clear. If the architect had worried about public opinion on his creations, the museum would not have existed--just like Jimi Hendrix left us with experimental music no one could ever have imagined while following his own instinct.