Chihuly Garden and Glass, Healing by Colors and Light
Glass pieces wave beautifully along the light. And what creativity and imagination by the artist who’s in love with glass! Chihuly Garden and Glass is your ultimate art destination in Seattle, a city already full of wonders.
The name Chihuly Garden and Glass (Chihuly Garden henceforth) may leave you wondering about its meaning. Chihuly is the surname for the Jewish American artist Dale Chihuly. He has had exhibitions at New York Botanical Garden, among other major U.S. locations, and his works have also graced canal and plazas in Venice, the Royal Botanic Gardens, Kew, near London, the Nuutajärvi river in Finland, the Citadel Tower of David Museum in Jerusalem, and Groninger Museum in the Netherlands. 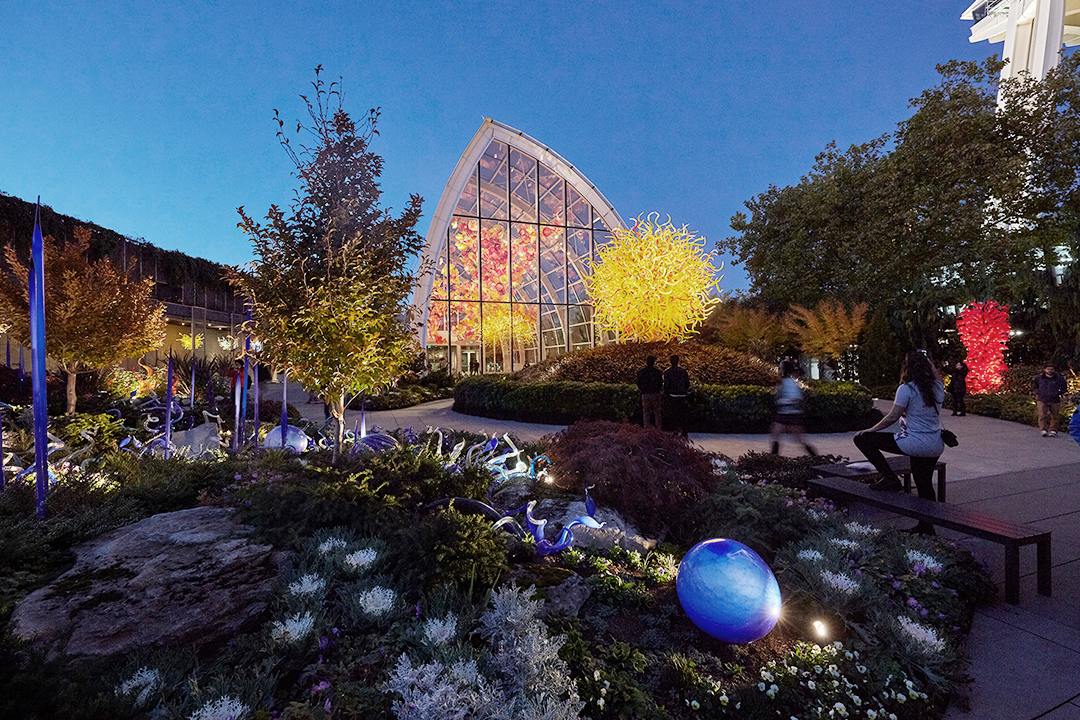 Why Chihuly?
Chihuly Garden is the one-stop destination to see the artist’s works spanning over 50 years. The garden is located inside the Seattle Center, which hosted the 1962 World’s Fair and has since become the most famous arts and cultural center in the city. The Wright family, who owns the iconic ‘Space Needle’ at the center, reached out to Dale Chihuly, who’s from the area, when they were planning on adding an artistic touch to the Seattle Center.
The native of the Pacific Northwest has built his career on trying to make his art easily accessible. His brand of art isn’t something that’s so cold and detached that it may make life feel worthless; instead, it is inspiring. That’s what defines Chihuly as an artist, and there couldn’t have been anyone who better fit the Wright family’s plans for an art center that visitors could enjoy comfortably.
Chihuly had 6,070 square meters of space to work with, and he wanted to make the use of both indoor and outdoor spaces. Inspired by his mother’s garden from his childhood, Chihuly worked with landscape architects to form the ‘Garden.’ Then the ‘Glasshouse’ was erected at the center of the garden, so that Chihuly could exhibit sculptures specifically built for the place. Chihuly has long had fascination with glass buildings, and not just glass greenhouses, either. He’s been collecting postcards and photos of train stations and industrial buildings made of glass. And the Glasshouse is truly the dream-come-true moment for Chihuly. He drew his inspiration from Sainte-Chapelle in Paris and Crystal Palace in London. The ‘Exhibition’ houses eight galleries, a theater and a café. Chihuly Garden and Glass opened in May 2012 as a long-term exhibit. 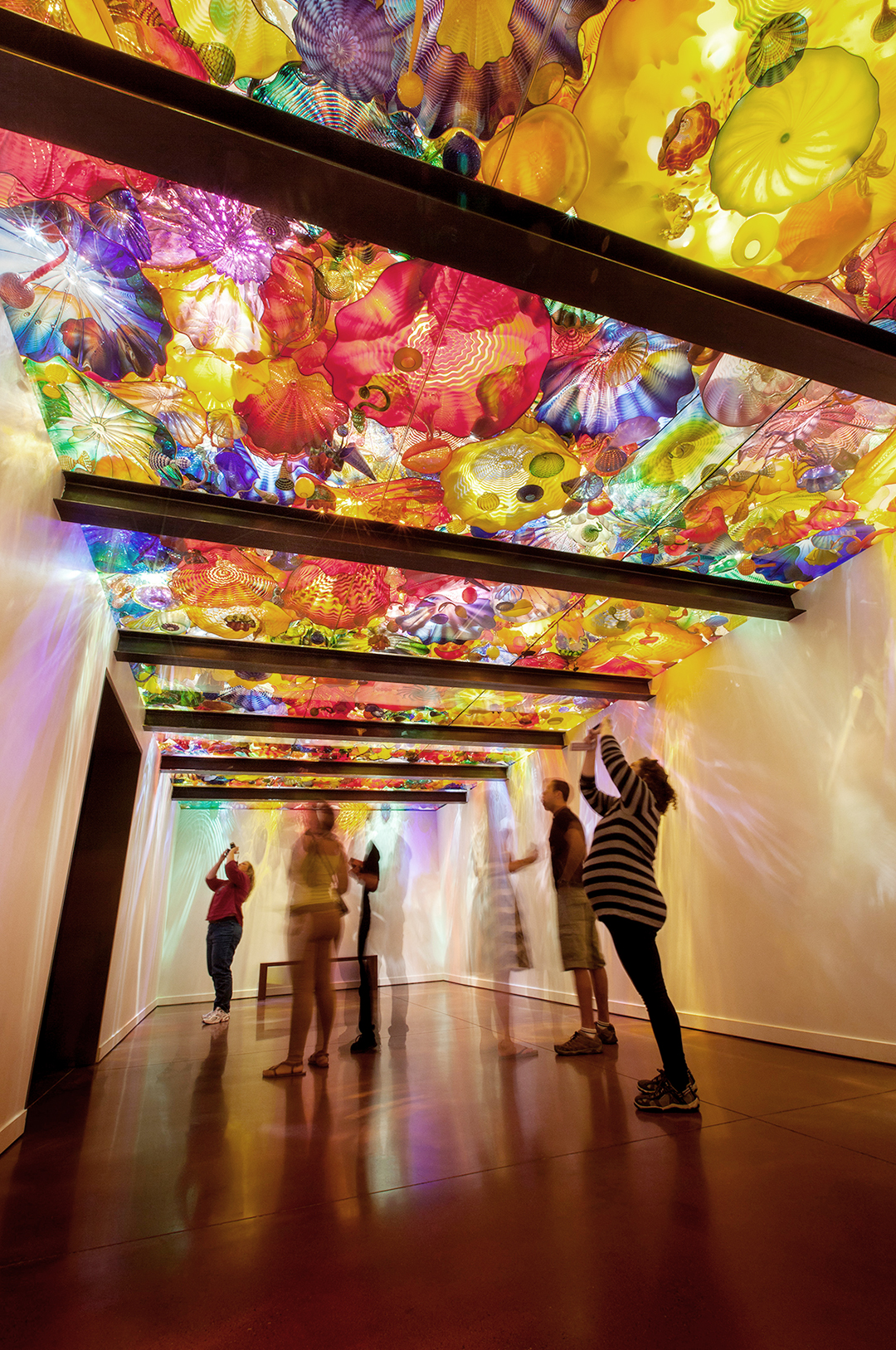 Trailblazer in Glass Art, Elevating Craft to Art Form
Chihuly wasn’t always in love with glass at first. Ever the creative type influenced by his mother, Chihuly studied interior design at the University of Washington in Seattle. Around this time, he began using new materials such as fabrics and neon. He also started taking interest in the relationship between his artworks and the environment that surrounds them. In 1961, Chihuly learned how to melt and fuse glass. He tried his hands on glassblowing using stained glass at home. He had his first ‘bubble.’
Glass now became Chihuly’s passion. In 1966, he enrolled at the University of Wisconsin-Madison, which offered the first glass program in the United States. The following year, Chihuly went to the Rhode Island of School of Design (RISD) and received a Master of Fine Arts degree in sculpture. He had a chance to travel overseas with his scholarship money, and he chose to work at the Venini factory in Venice. He became the first American to blow glass there. After returning to the U.S., Chihuly set up a new glass program at RISD and taught for over 10 years.
As a sculptor, Chihuly also dabbled at bronze and ceramic, but nothing gave him the kind of satisfaction and sense of fulfillment that glass did. There was something magically inspirational about glass. Chihuly has broken down all stereotypes about glass, and has been experimenting with possibilities of its shape and expression. 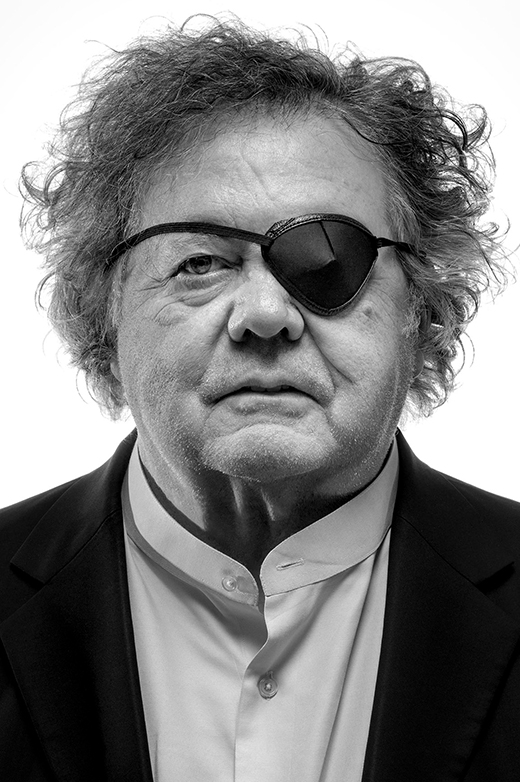 “Glass is the most magical of all materials. It transmits light in a special way.”
Dale Chihuly
From Small Objets to Large Installations That Alter Environment
An audio guide is available at the Exhibition Hall. Actor Kyle MacLachlan, a Washington native, opens things up. A star of several David Lynch films, MacLachlan says the unique cultural background of the area helped shape him into the actor that he’s become. And if you think of his series, you’ll understand why and how. Chihuly and his fellow artists, curators and architects who worked on the garden follow MacLachlan. 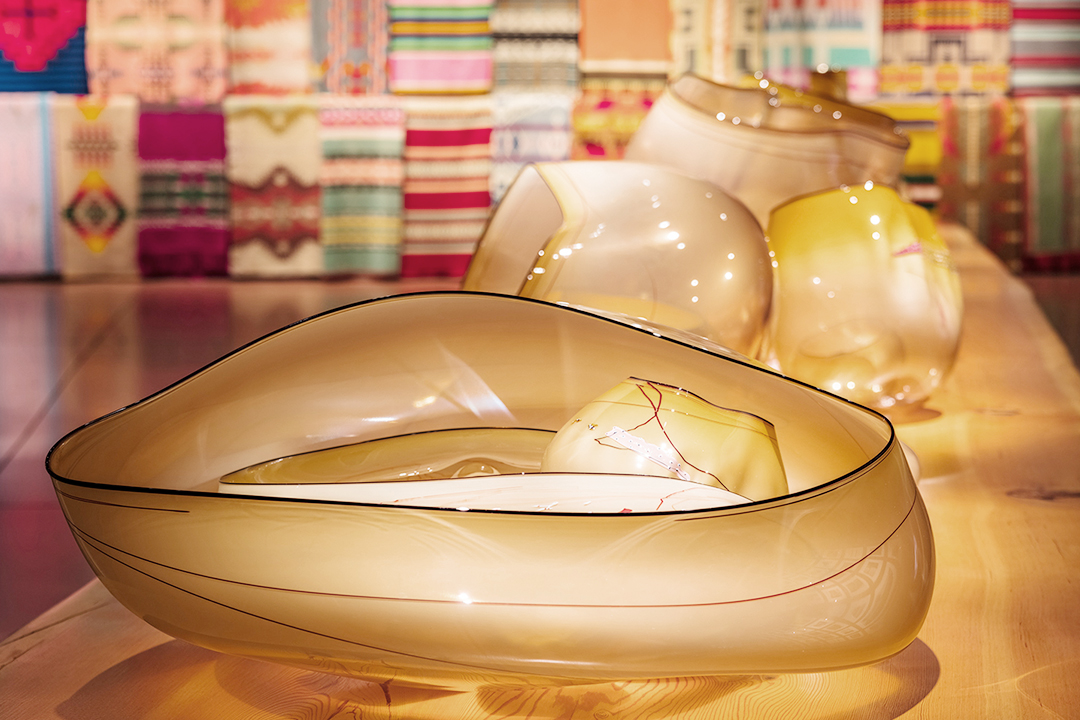 Chihuly’s works range from his early pieces to signature works from each era, and some of the newest ones specifically produced for the garden. The Northwest Room exhibits the Baskets series, inspired by baskets from the Native Americans from 1977. To create asymmetrical vessels, Chihuly blew his glass as much as he could and produced thin, natural walls. After multiple attempts, Chihuly figured out how to create his basket with fire, gravity and centrifugal force without relying on artificial tools. He continues to favor similarly organic procedures. 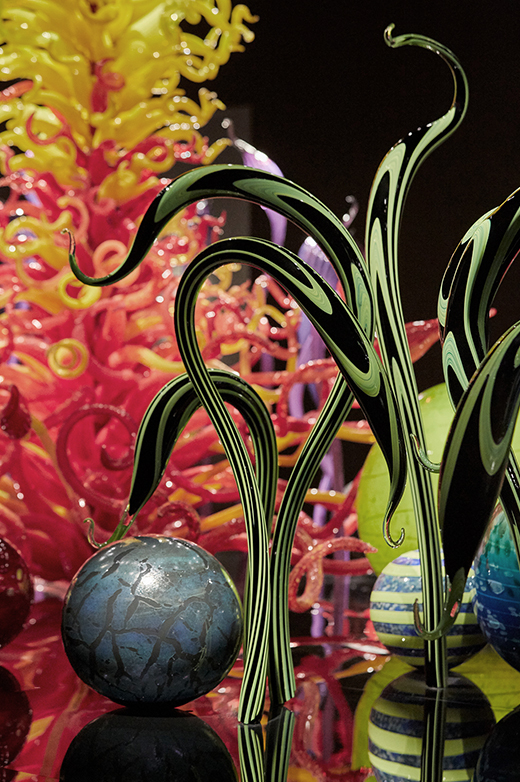 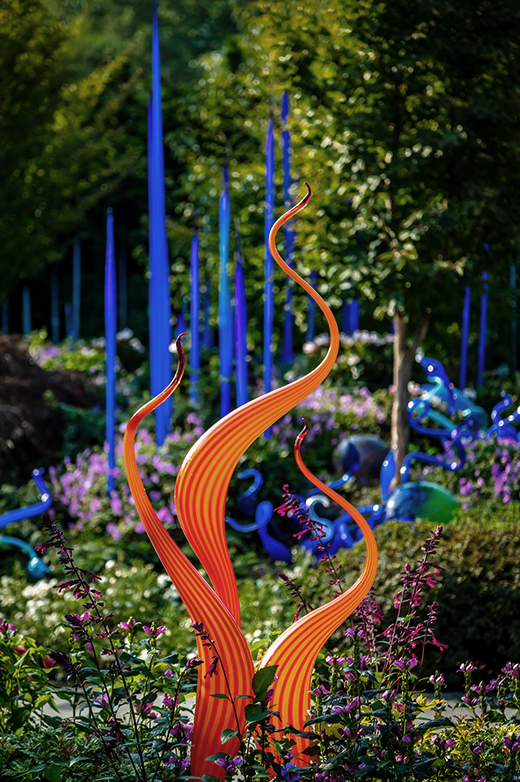 A piece that brings to the mind life or plants in the ocean floor. Dale Chihuly, Tiger Marlins (detail), 2012, Chihuly Garden and Glass, Seattle © Chihuly Studio Photo by Nathaniel Willson 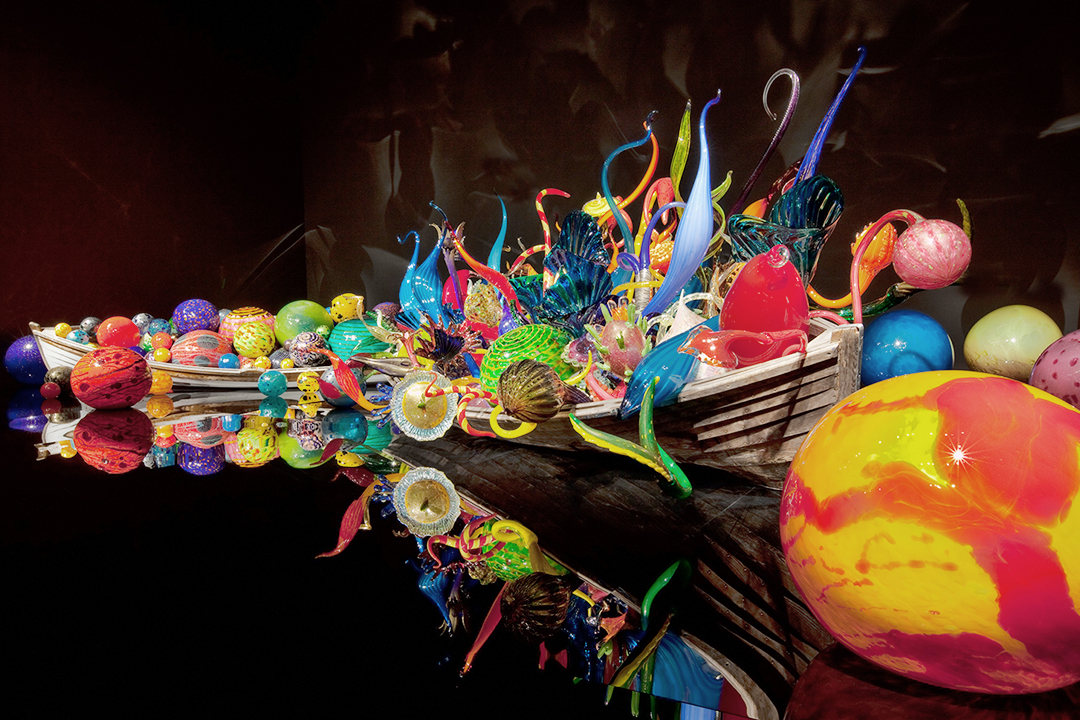 The way Chihuly works with glass is clearly different from that by other artists. Whereas others try to force glass into the form they want to build, Chihuly only use gravity and centrifugal force. He lets glass do its own thing, so that he can get organic shapes. There may not be anything symmetrical or regular forms to Chihuly’s pieces, but they exude a much more natural feel.
He grew up in the Pacific Northwest and it’s no coincidence that Chihuly loves water. And when it comes to glass, Chihuly especially loved the fact that it is transparent and reflective, just like water. The ‘Persian Ceiling’ at the Exhibition is built on that concept. It’s based on Chihuly’s earlier series called the Persians, for which he created imaginary sea creatures. The delicate patterns and energetic colors of clams give Chihuly’s pieces so much life. Hoping he would provide his audience with unique experience, Chihuly was inspired by pavilions with ivy roofs. He completed a fantastic space that makes you feel like walking through an undersea tunnel at an aquarium. 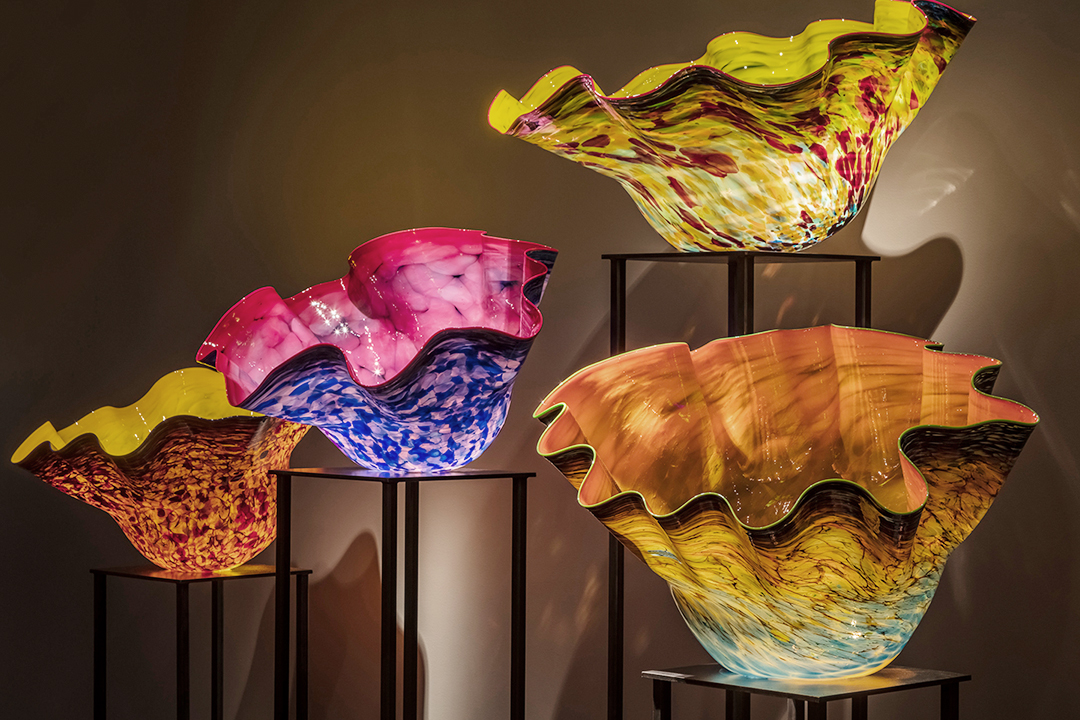 At one corner of the Exhibit, you’ll get to see local artists demonstrating glass blowing. Speaking of local artists, about a third of the world’s glass artists are reportedly residing in the state of Washington.  From Seattle, home of Chihuly Garden and his studio, Pilchuck Glass School, co-founded by Chihuly, is an hour drive up north. The Museum of Glass in Tacoma is 40 minutes away south. ‘Refract: The Seattle Glass Experience,’ a glass art fair launched last year, is also in the area. World-class artists have been flocking to Seattle and its region because of such strong glass art infrastructure. And Chihuly is at the heart of it all. 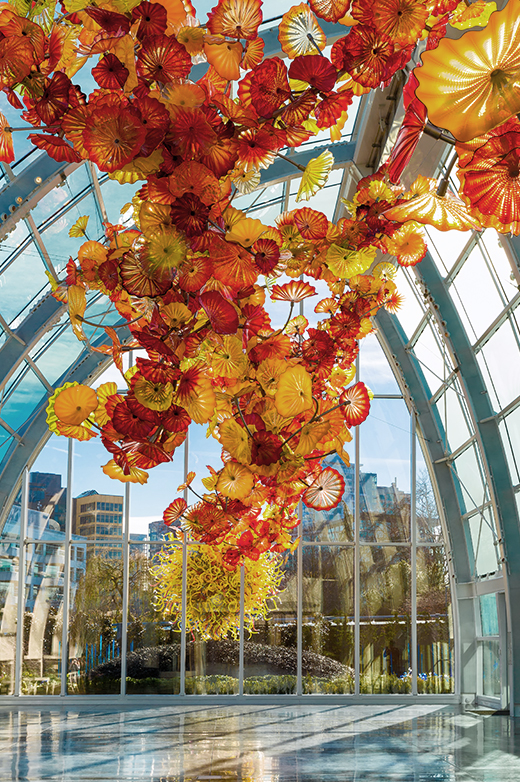 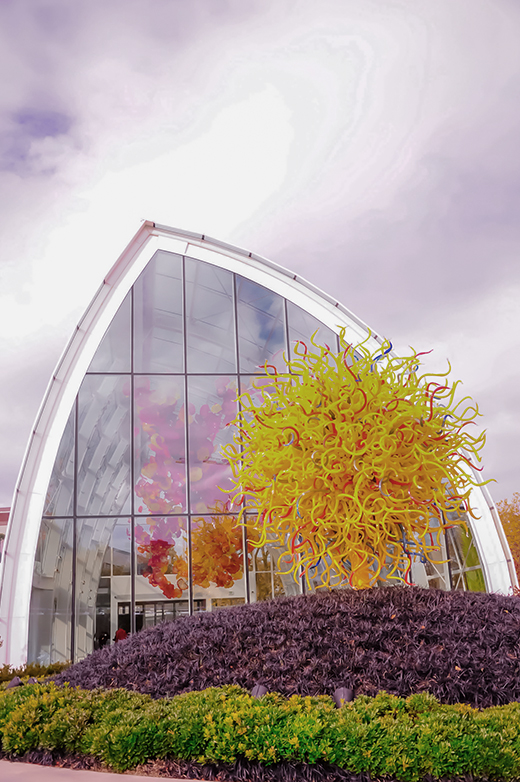 The glass greenhouse and artworks viewed during the day appear brighter and more natural. © Shutterstock

Why Garden?
Most of large-size installations have been set up outside the Exhibition. The Garden, which offers the backdrop, has some 350 different kinds of plants and some 42,000 bulbs. Trees, shrubs, ferns, plus perennial and annual plants have been all meticulously planted. You’ll be greeted by plants in full bloom at any time of the year.
Pieces there include ‘Pacific Sun,’ an explosion of yellow and orange; ‘Citron Icicle Tower,’ which soars through the sky among trees; and ‘Leeds’ series, which offers clear contrast in colors with plants around it. The highlight is clearly the ‘Glasshouse.’ Built specifically for the garden, the Glasshouse is a sculpture in a color palette of orange, yellow and red. AT over 30 meters long, it’s one of the largest suspended sculptures by Chihuly. He has intentionally left plenty of empty space inside the Glasshouse. Chihuly wanted the visitors to be able to view colorful, suspended pieces together with the sky in the background. In a perfectly Instagrammable shot, you can get Space Needle and Chihuly’s colorful glass pieces in the same frame. 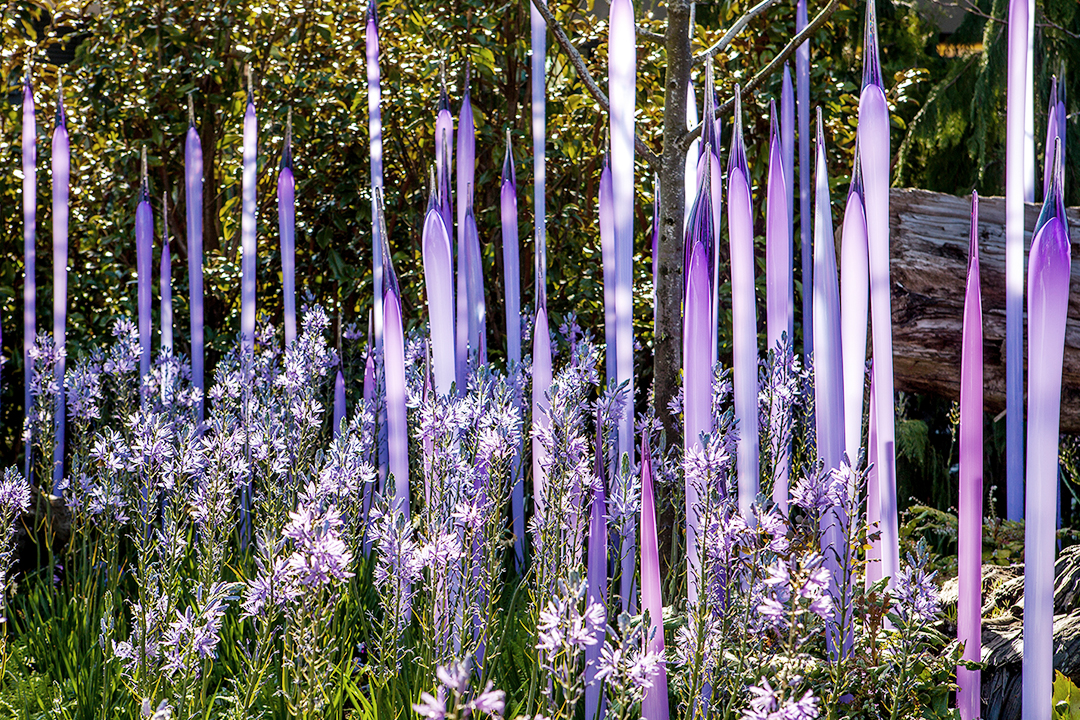 “I want people to be overwhelmed with light and color in some way that they’ve never experienced.”
Dale Chihuly
We have to talk about the garden here again. Of course, it’d be a shame to put so much work into it and simply have it serve as a background for art. I wanted to find a reason that I could accept myself, and while doing my research, I suddenly remembered what an uncle of a friend I met in Seattle said. He’d moved to America a long while ago and settled in Seattle because the city was ‘close to nature.’ It seems to be a perfectly ordinary reason, but few things can better explain the love of nature that people in that region have. The Pacific Ocean is one. But just a short trip out of the city, and you’ll reach forests, mountains, waterfalls and national parks. No discussion of the Pacific Northwest is complete without nature. That is reason enough for Chihuly Garden, a pride of Seattle, to have such a beautiful exhibition called the ‘Garden.’