For Pottery, by Pottery, of Pottery, Bat Trang
Vietnamese pottery is famous across the world. Its birthplace, surprisingly, is a small village named Bat Trang in the vicinity of Hanoi.
About 12,000 years ago, mankind started making earthenware using clay. A certain form of vessel is created with clay and fired to make it hard. Earthenware, one of the oldest human inventions, is a prototype of ceramics or pottery that we use today. It won’t be an exaggeration to say that pottery has followed men along the trajectory of civilization. Naturally as civilization progressed, pottery also went through many transformations. Its essence, however, remains unchanged. Men created vessels with their bare hands, using only the natural elements of earth, water, fire, and air. This simplicity contains both the aesthetics and philosophy of pottery. Being the original form of human craftsmanship, pottery is future-oriented. It embodies the principle of ecological circulation in which whatever comes from nature returns to nature. Each piece is handcrafted carefully by the artisan, and it is time and patience that determine if the work is successful. Ecology, small-scale craft production, and the art of slowness all coincide with the latest cultural movements. 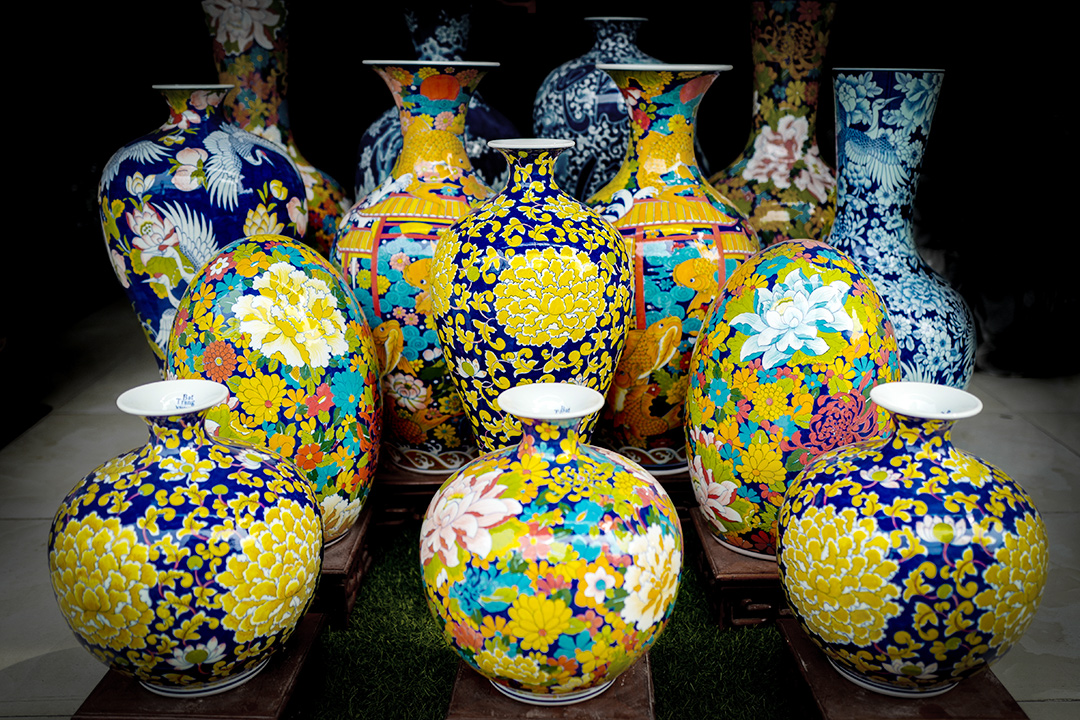 “I wish I could marry you. I’ll buy Bat Trang bricks to build our house.” It is part of an old folktale of Vietnam implying that Bat Trang clay and related products have long been recognized as the best in the country. 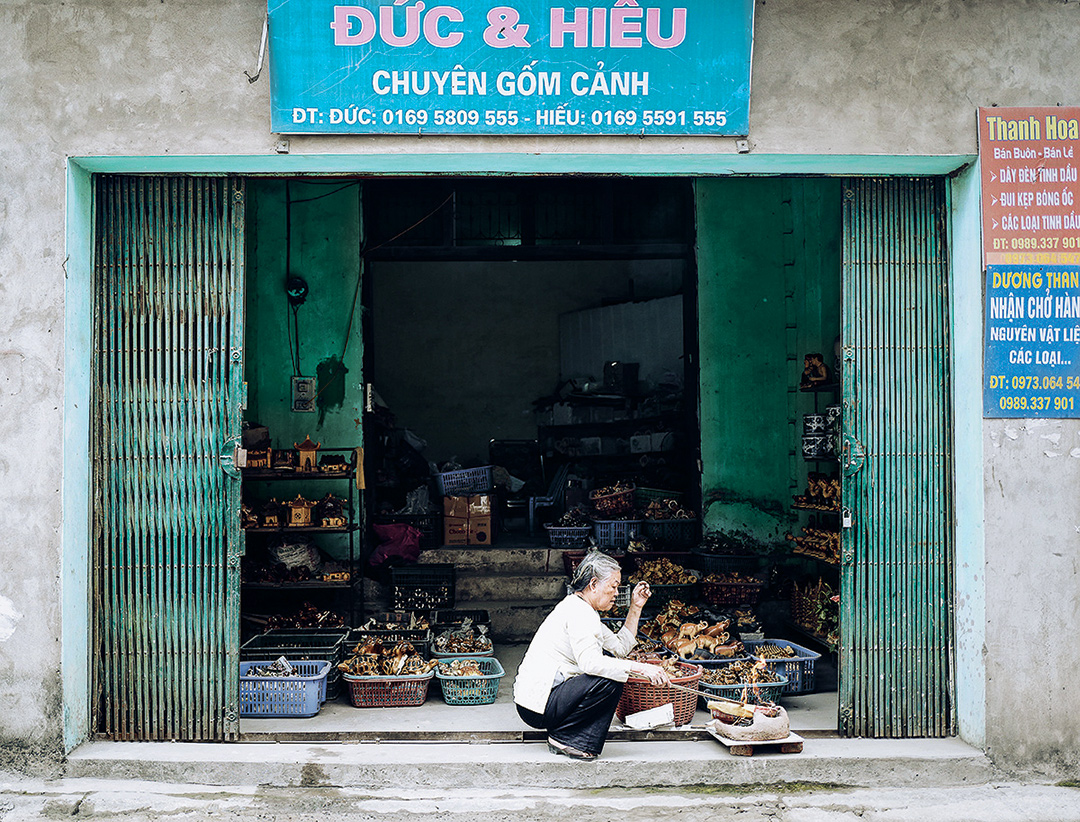 Thousand-Year History of Pottery in Bat Trang
A special village sits in the outskirts of Hanoi, about 13 kilometers away and a 30-minute taxi ride from the city’s downtown. It’s ‘Bat Trang’ ceramic village where the entire local community is devoted to pottery-making. The fame of this small village is a source of pride not just for northern Vietnamese regions including Hanoi but the entire nation. Such popularity is not new. “I wish I could marry you. I’ll buy Bat Trang bricks to build our house.” It is part of an old folktale of Vietnam implying that Bat Trang clay and related products have long been recognized as the best in the country.
According to a documented record, the history of pottery in Bat Trang goes back to as early as the 14th century. However, residents of the ceramic village contend the heritage of pottery-making is about a thousand years old, much earlier than the record indicates. Their theory is that the history of pottery began in Bat Trang in the early 11th century when Hanoi(originally named Thang Long) became the capital of Imperial Vietnam that had established the nation’s first great dynasty after independence from China. In fact, the Ly dynasty promoted various handicrafts and commercial activities near the capital for the prosperity of the kingdom, prompting local artisans to form a craft village around the current Bat Trang area, close to Hanoi. Thanks to its abundance of white clay, Bat Trang became an exceptional settlement for potters and has since gradually built its reputation as a ceramic village. 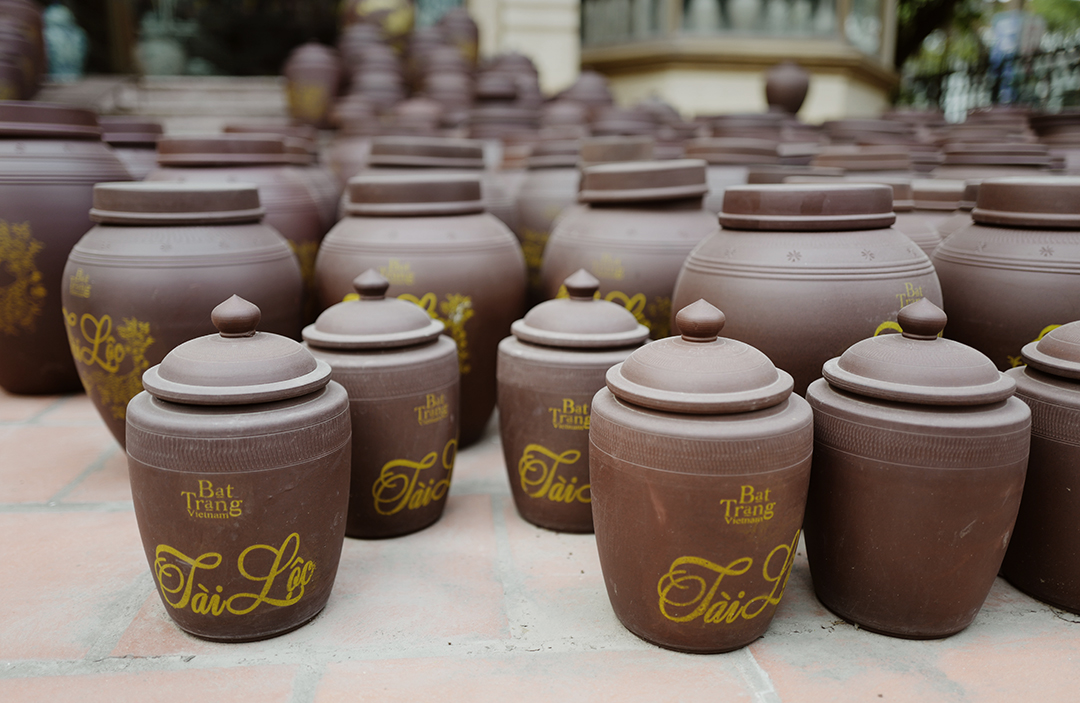 Today, ceramic and pottery products made in Bat Trang are popular across Vietnam and the world. For one thing, unique designs created by ceramic studios or small-scale manufacturers attract customers. For another, the delicate touches made by master potters and the finishes revealing the amount of effort put in for each piece inspire them. Bat Trang’s merchandise is exported to the international market and widely used for daily lives as well as for decorational, artistic, or religious purposes. 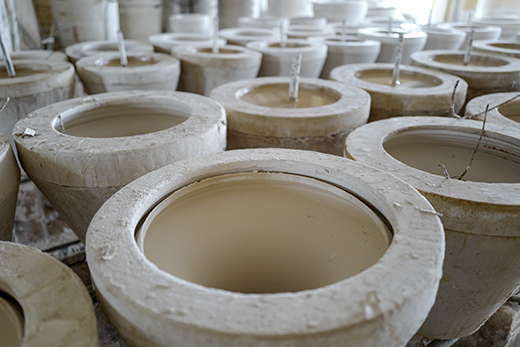 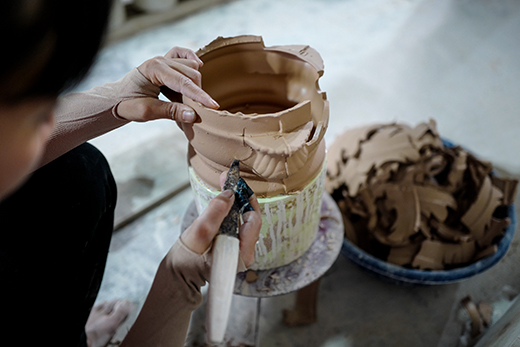 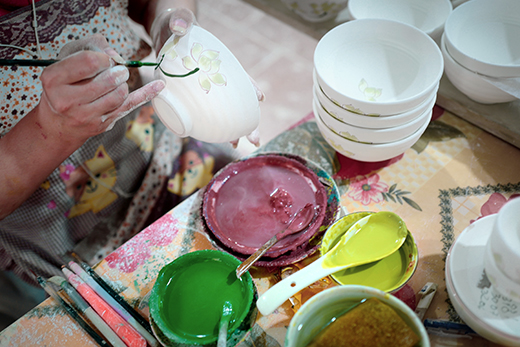 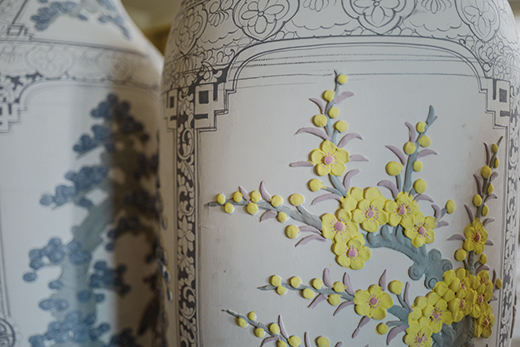 How ceramics are made in Bat Trang. Master potters pour their sweat and tears into each one of them. © Jeon Haein

Lump of Clay Becomes Bat Trang Pottery
Regardless of how fancy a piece of pottery is, it all starts from a lump of clay. A shapeless dough goes through three big steps to be reborn as a proud Bat Trang product. First, it’s the framing work to create a pot form. High-quality clay gets kneaded and shaped into a pot. You can think about the famous pottery wheel scene from the movie “Ghost” for this step. In actual pottery-making, depending on the design, size, and use of the piece, there are diverse ways of framing including pouring the clay into a mold. Second, now that the pot is formed, it should be glazed. This is also when you decide on the color and patterns, if you wish, for the pot. You can either draw in a pattern or carve it out with a carving knife. After the decoration is finished, a coat of glaze is added to ensure durability. The third and final step is ‘firing.’ The pot is completed after a ‘firing’ in a kiln where the temperature could reach up to 1,200-1,300 degrees Celsius. The baking time varies depending on the piece. It could be half a day or five whole days.
For a piece of pottery to be produced in Bat Trang where every step is carried out manually, at least a week is required. Once you realize that even a hand-sized, simplistic dish, easily found in the ceramics market in the village, went through the same process, you will have a newfound respect for the sweat shed by Vietnam’s master potters and appreciation of the handicraft ceramic wares and pottery stacked across the Bat Trang market. 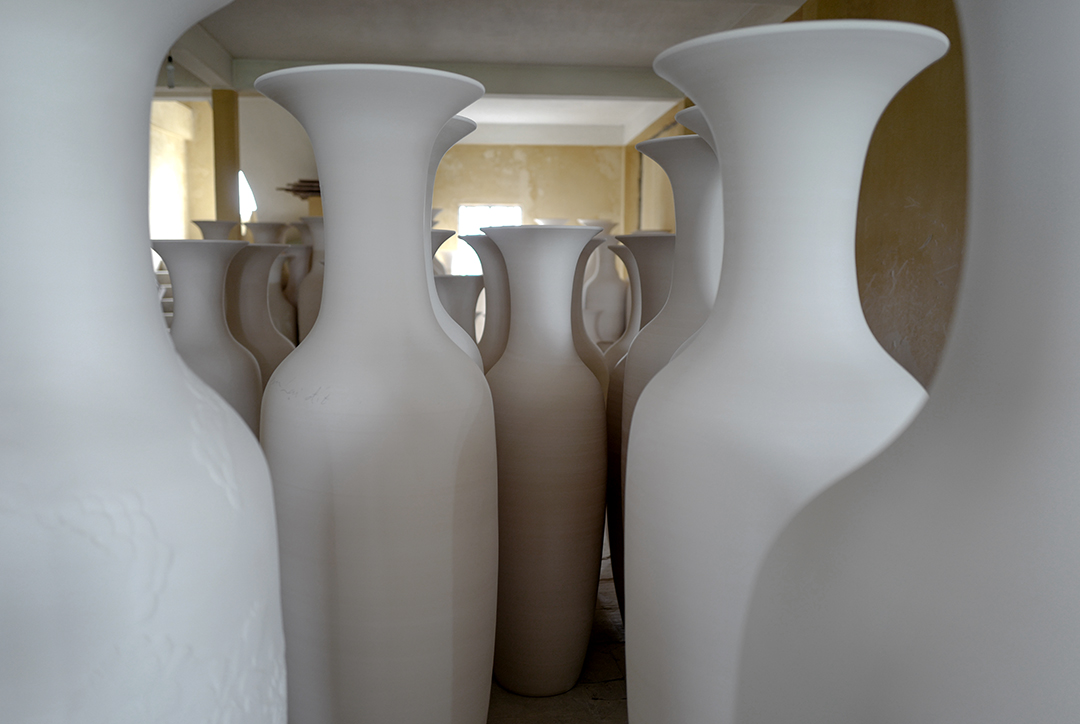 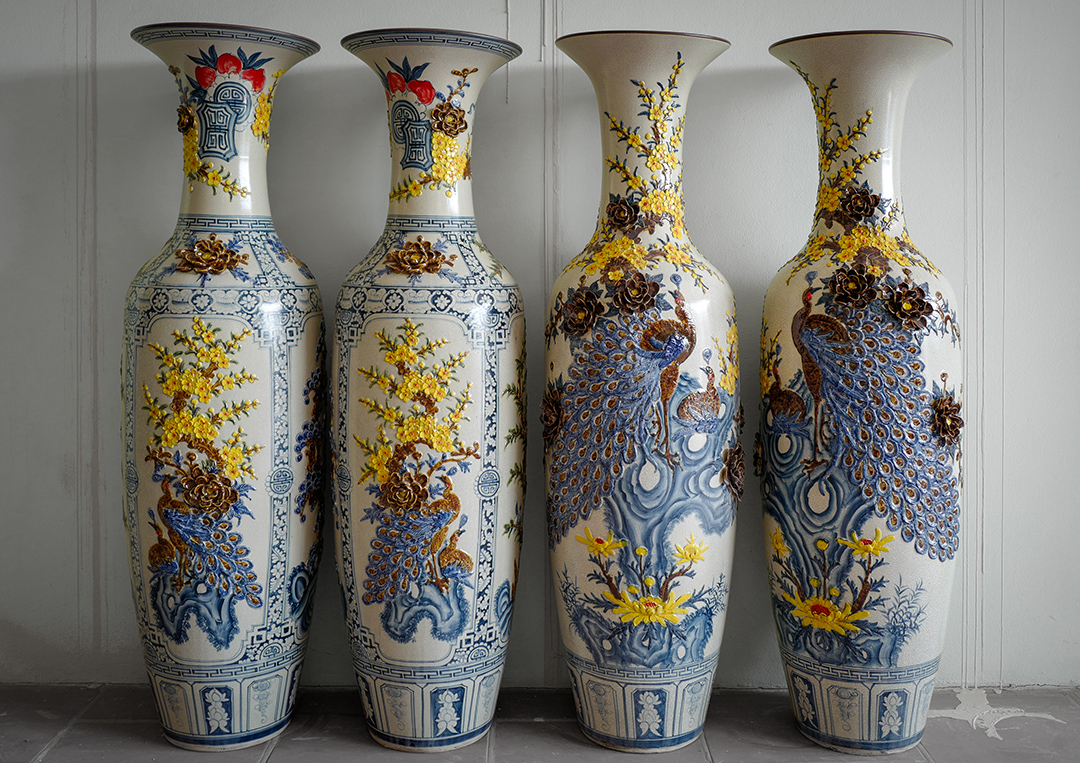 Luxurious ceramics by Dat Huyen, exported to all over the world © Jeon Haein

Present and Future of Bat Trang Pottery
A particular ceramic ware from Vietnam will look familiar to Koreans. Especially if they are fond of Vietnamese cuisines, they will instantly recognize its design and pattern. It is because the ceramic items were unilaterally used in a popular franchise restaurant specializing in Vietnamese food. The bowls and plates having colorful patterns were all made in Bat Trang and they are one of the iconic Vietnamese goods that drew Koreans to the rice noodle dishes. A daring use of primary colors such as red, blue, and yellow, along with the flower and plant patterns, gave the articles a uniquely Asian and Vietnamese vibe, and ultimately contributed to enhancing the value of Bat Trang ceramic ware and pottery in the global community. The key role was played by potter couple Phung Dat(husband) and Tran Huyen(wife) and their family who run the ‘Gom Su Dat Huyen’ shop. 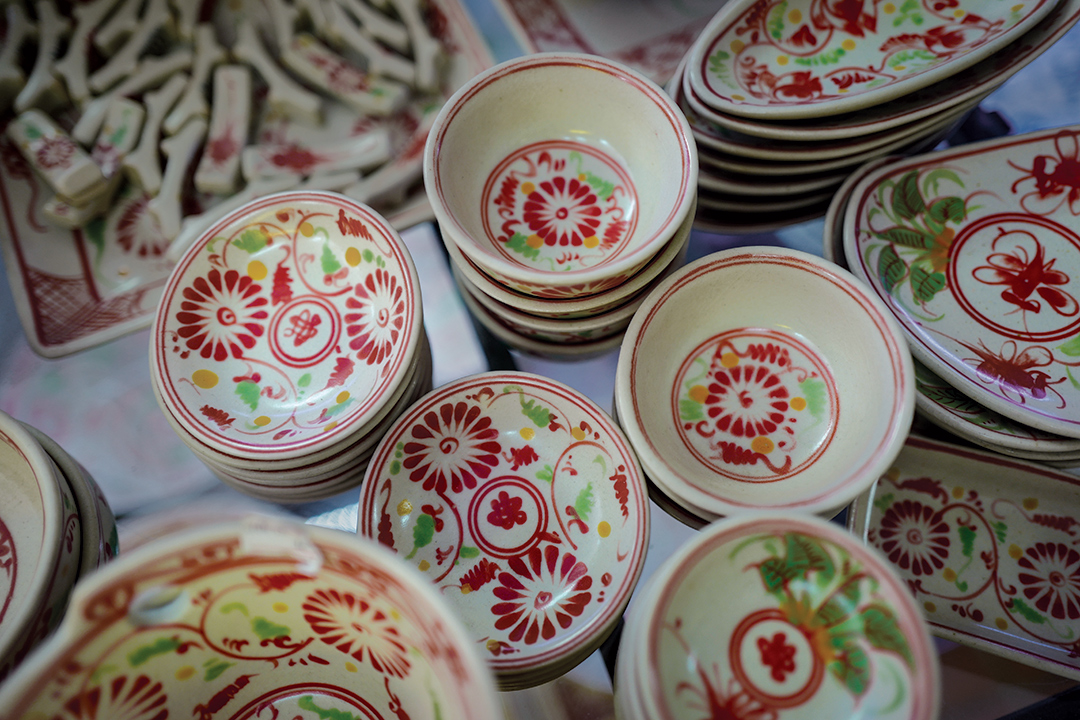 Dat and Huyen are the descendants of a native potter family that have made ceramic for generations in Bat Trang. Including their parents, three generations currently live in Bat Trang and engage in a pottery business. The Dat Huyens present a wide range of ceramics including dinnerware and big, artistic pieces. They work with experienced professionals including their family members to ensure all their products are handmade. The top-quality ceramics representing the Bat Trang industry are currently exported to Korea, Japan, and Europe. 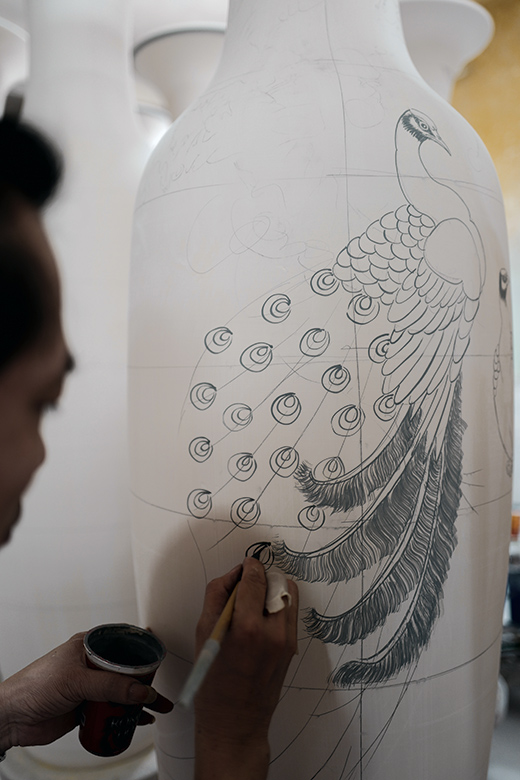 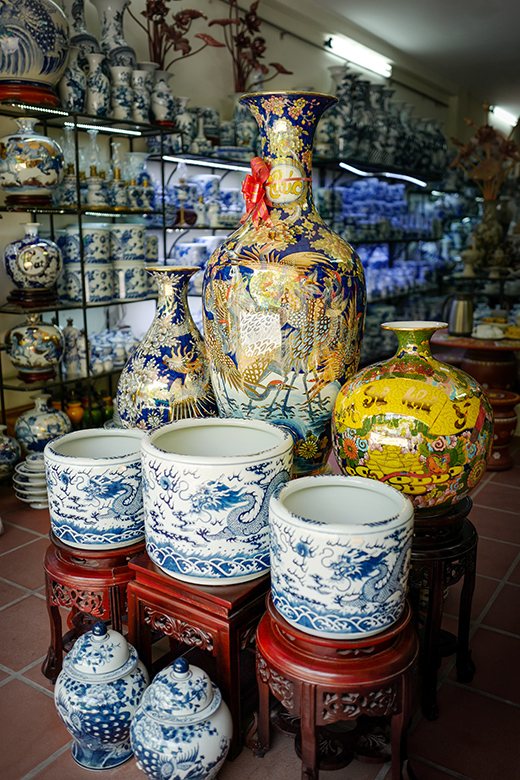 Huyen, having begun dealing with pottery at seven years old, says the true value of Bat Trang ceramics with thousand years in tradition lies in its acceptance of ‘change.’ “Bat Trang ceramics do not settle for today’s fame. In the ever-changing modern society, our pottery should not be afraid of absorbing and accepting new technology. Potters of Bat Trang, including my family, always study new ways and designs and do not hesitate to give them a try. That’s the secret behind the success of our ceramics and also the direction we will take.” 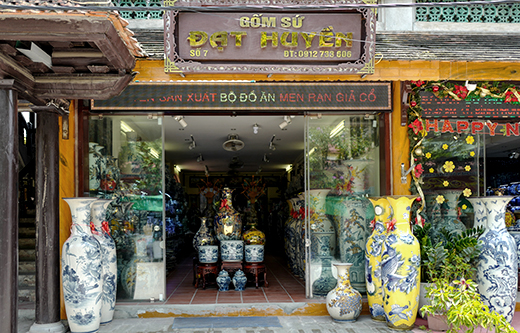 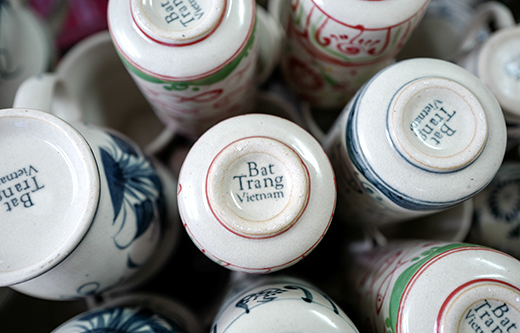 Bat Trang ceramics and pottery are truly becoming the world’s best thanks to the synergistic effect between the villagers’ centuries-long craftsmanship and younger generations’ modern business philosophy. With the continued effort by up-and-coming Bat Trang artists including Dat and Huyen who serve as a bridge between the past and present, the Vietnamese pottery industry is rapidly evolving today. 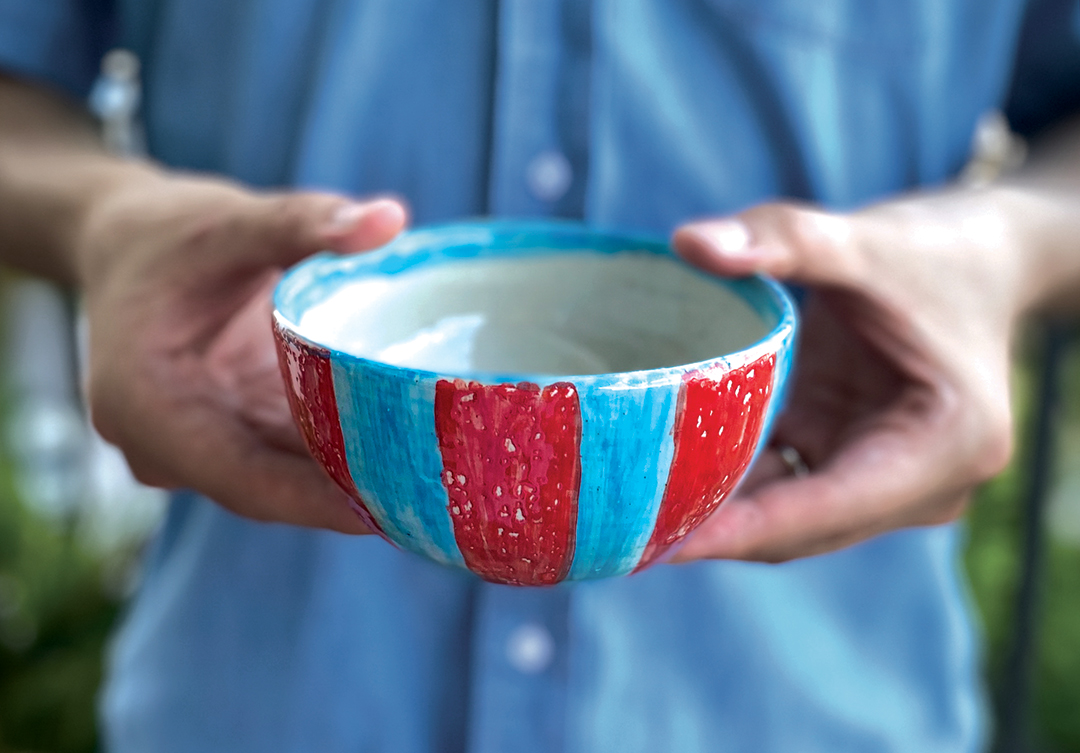 Everyone Can Make Ceramic
“Everyone can make ceramic.” Just like the village’s slogan, anyone can have the pottery-making experience. Located in the heart of the village, Bat Trang’s historic kiln ‘Lo Bau Co’ is centuries old and currently a center of year-round ceramic and pottery experience. The cost is between 1,500 won and 10,000 won per person depending on the program.
An expert potter brings out a lump of clay and demonstrates how to make a bowl. From start to finish, he shows an old-fashioned way using hands. Even the wheel is turned by hand without electricity. The round-shaped lump goes in the center of the wheel, and one hand shapes the lump into a bowl while the other turns the wheel. A simple touch changes the form and size of the bowl so using the same material at the same time will result in completely different products. You get to have your own piece of pottery that no one else has in the world. 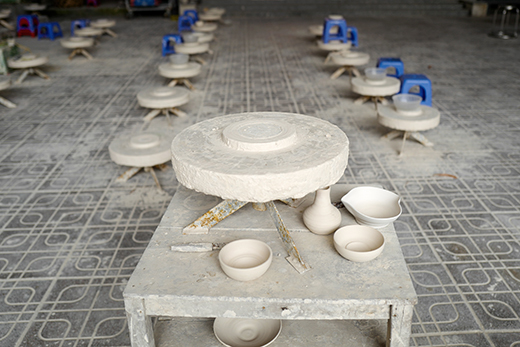 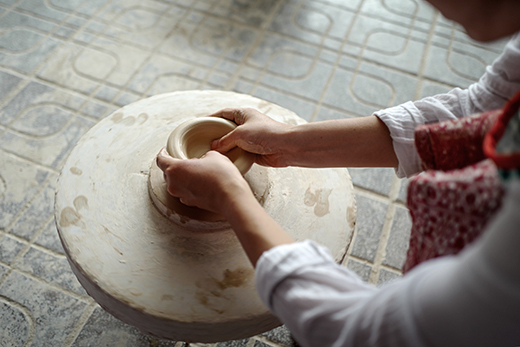 The experience of holding clay in your hands and creating a shape with it is recommended for all ages and gender. The damp, cold sensation at the tip of your fingers and the soft yet firm feel on the palm of your hand will keep children engaged and offer grown-ups a therapeutic break in a way they have yet to imagine.
If you just want to try making pottery, the framing and coating parts can be done right on the day of your visit. If you wish to actually use your creation, you will have to wait 4-5 days for firing until the piece can be delivered to a designated address you provide. 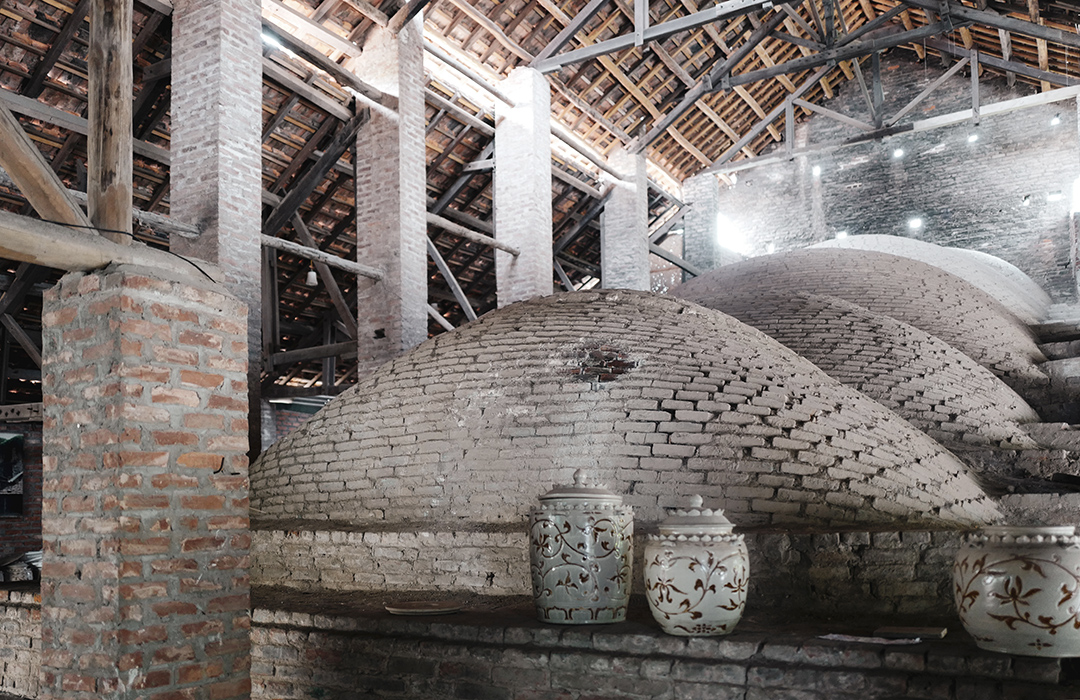 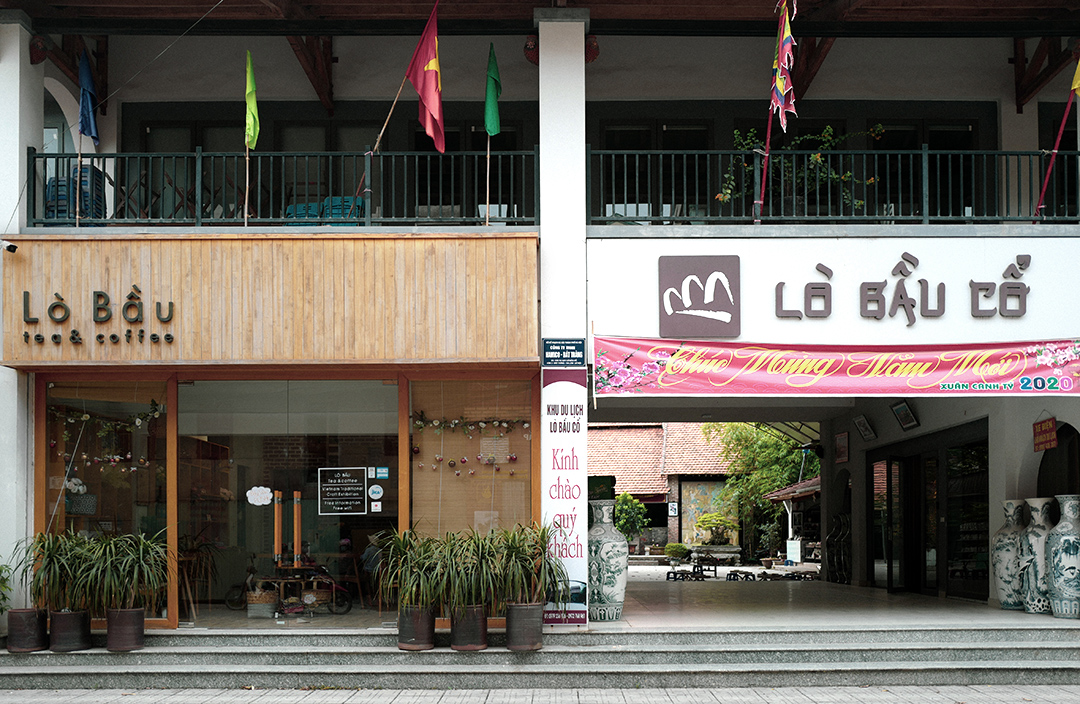 Bat Trang Legacy, Historic Gourd Kiln Lo Bau Co
A priceless item of tradition is preserved in the heart of Bat Trang village. ‘Lo Bau Co’ is a kiln estimated to be nearly 500 years old. The brick structure, spanning 15 meters in length, is designed for wood burning of pottery. It uses the most original and basic way to bake pottery. Although the village once owned close to 20 traditional kilns, Lo Bau Co is the only one left at present. It isn’t functional but still is a source of pride for the residents of Bat Trang. The ancient gourd kiln plays the role of a local fixture promoting the long tradition and fame of Vietnamese ceramics and pottery to visitors. 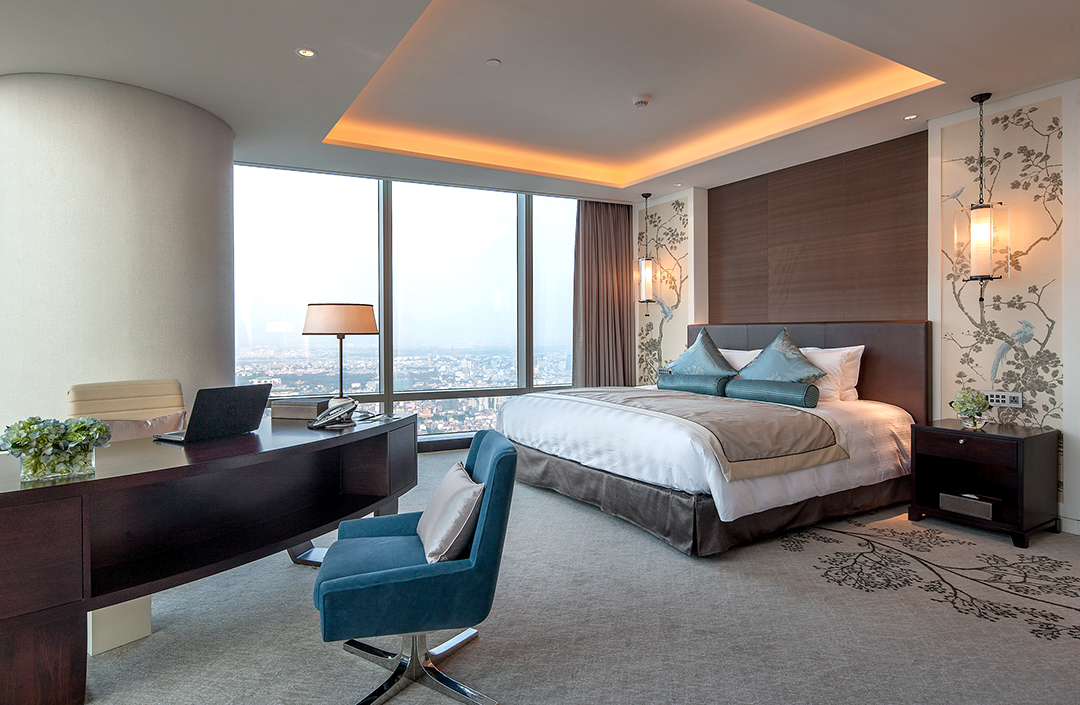 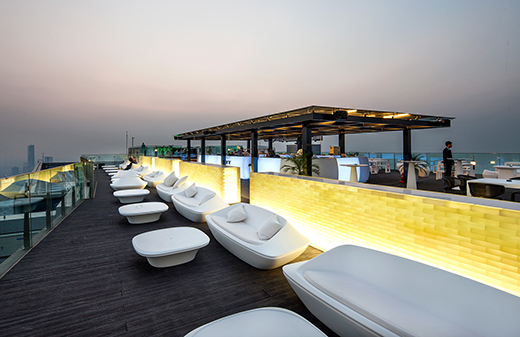 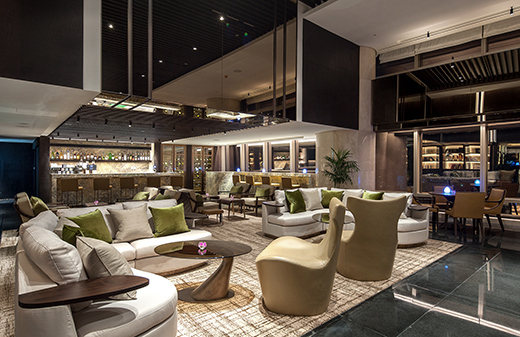 Where to Stay in Hanoi: LOTTE HOTEL HANOI
LOTTE CENTER HANOI, a new landmark skyscraper in the Vietnamese city, has LOTTE HOTEL HANOI sit on its upper floors. The 318 guest rooms are decorated with traditional Vietnamese patterns and famous for their breathtaking views of the city. The center has upscale restaurants offering international cuisines that entertain your palate with the top-quality ingredients either imported from around the world or locally grown. There is also a rooftop bar where guests can enjoy drinks and food while taking in the panoramic skyline of Hanoi.
Address 54, Lieu Giai St. Cong Vi Ward. Ba Dinh, Hanoi
Phone +84-24-3333-1000
Homepage www.lottehotel.com/hanoi-hotel