JR in New York
Numerous artists have spent time in New York City and depicted the Big Apple in their own fashion. Some have taken photographs. Others have done paintings. There were those who played music. How does French photographer JR view New York ?
JR, a 37-year-old artist who is hardly seen without sunglasses, always keeps himself busy. Since the coronavirus pandemic threw the world upside down in March, JR has been securing food for thsoe living near Paris whose livelidhoods have been affected by the lockdown. JR has also worked with famous chefs whose restaurants were shut down, preparing meals and delivering them to customers. JR also took over the new art program at L'école de cinema Kourtrajmé, a film school by the French filmmaker Ladj Ly (whose was nominated for the Academy Award for Best International Feature Film alongside Bong Joon-ho’s ). JR is responsible for recruiting instructors and overseeing online classes. JR also worked on the special magazine cover ‘Finding Hope,’ designed to deliver a message of hope during the pandemic. Even with the world around him remains in a lockdown, JR has been finding plenty to do.
JR, Artist with Humanistic Touch
Born in Paris in 1983, JR is at once a photogarpher, street artist and social activist. As a teenager, JR was more interest in graffiti than social issues. He and Ly were both members of the art collective called Kourtrajmé, furtively decorating walls and roofs across Paris with their graffiti. He began signing off his works with the letters JR, and it became his pseudonym. It’s an initial for his birth name Jean René. JR and the signature sunglasses give this artist an air of mystery.
A small camera that he picked up at a RER metro station in 2001 forever changed his life. He began documenting his and his friends’ graffiti painting, and then printing them in black and white for street exhibitions that combined photo collage and graffiti. 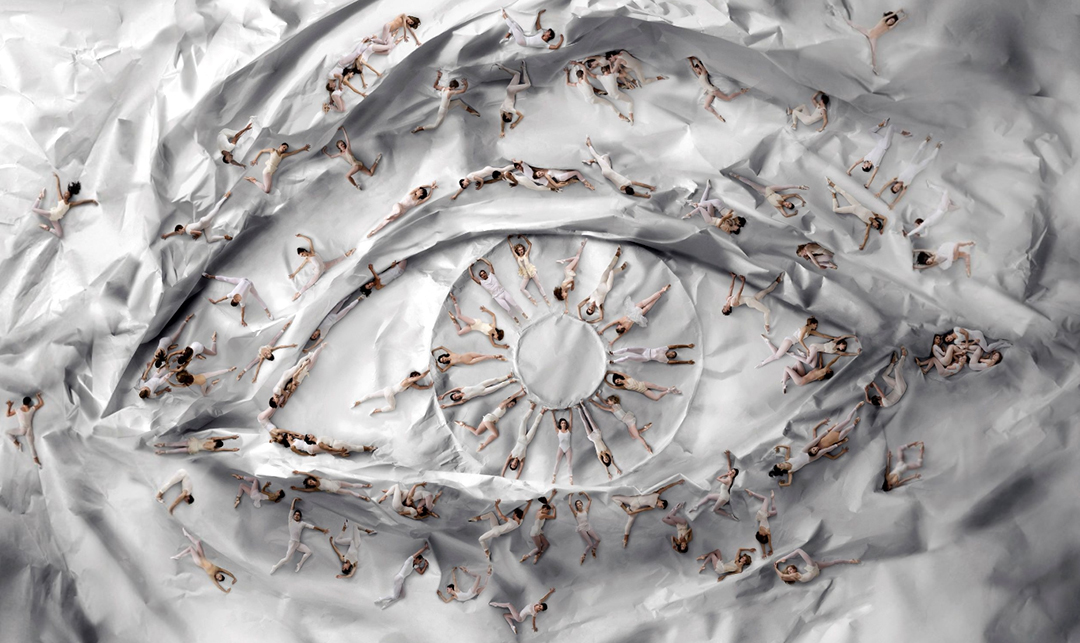 JR was no different than other street artists. He was engaged in unauthorized, illegal activities. But people who saw these exhibitions realized they were looking at something special. With his art, JR became the voice of the unheard. His messages spread throughout Paris and helped foster interactions between members of different communities. With such positive feedback from the public, city authorities stopped trying to take down these illegal photos and began instead to see them as a form of public art. Cities outside Paris have reached out to JR, too.
The mainstream art circle also recognized the far-reaching influence of JR’s humanistic messaging and has since become a voluntary collaborator. Artist Shepard Fairey once said, “JR is the most ambitious person I know.” 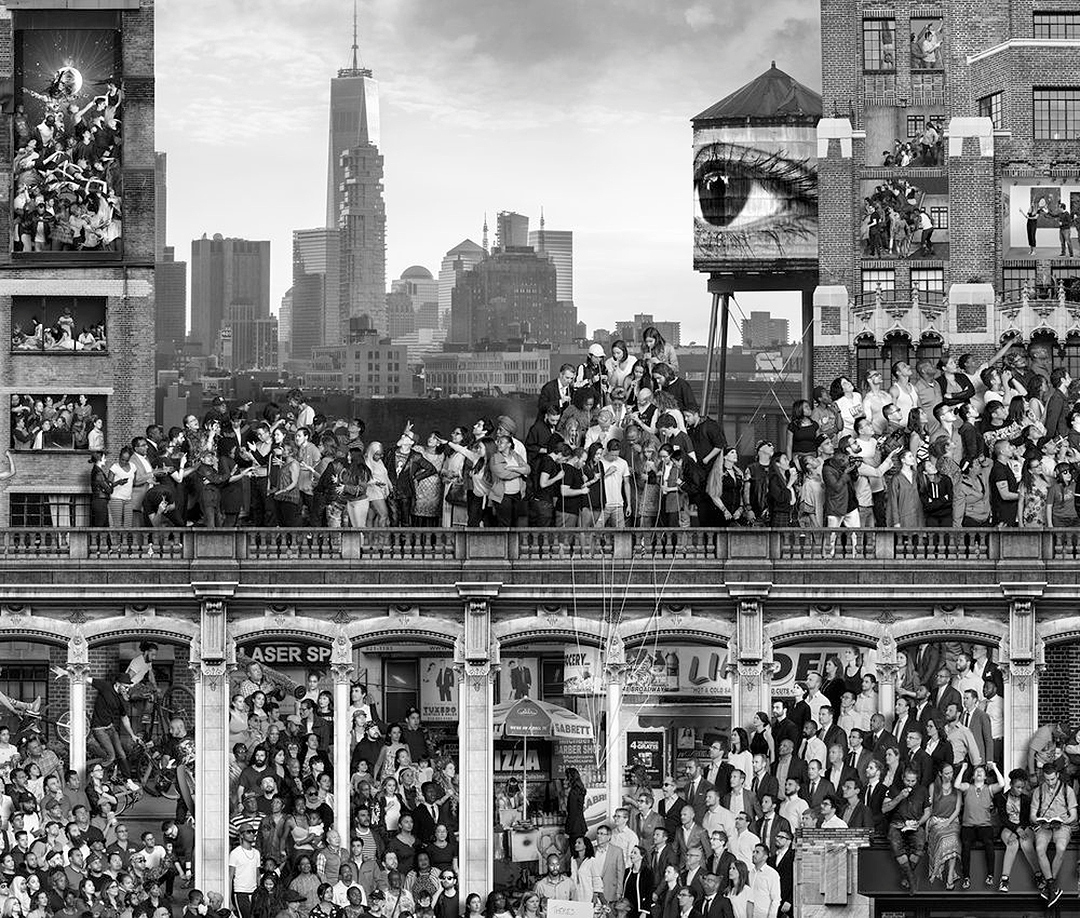 JR’s Art
The most important theme in JR’s works is humanism.
‘Portraits of a Generation (2004~2006),’ which put JR on the map, was a project designted to tell the story of people he knew in Montfermeil and Clichy-sous-Bois following the 2005 French riots. These riots were caused by the electrocution of two boys who were being chased by police near an apartment building where JR put up his large collage in 2004. And the riots also brought the international spotlight on JR’s photos. Portraits and contact information for young men in the area, who had been described merely as violent strangers, went up across affluent areas of Paris. The message was that these youths were all ordinary members of their community, not just some immigrants with a violent streak. Parisians took notice, and JR quickly became an artist to watch. 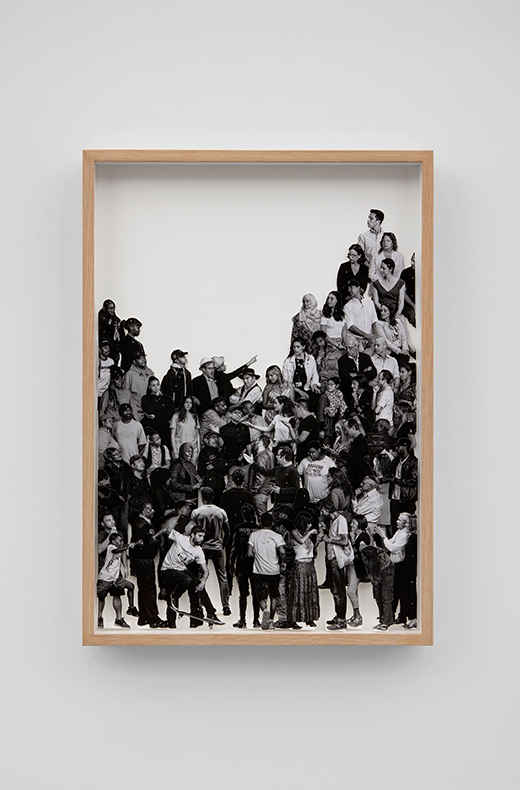 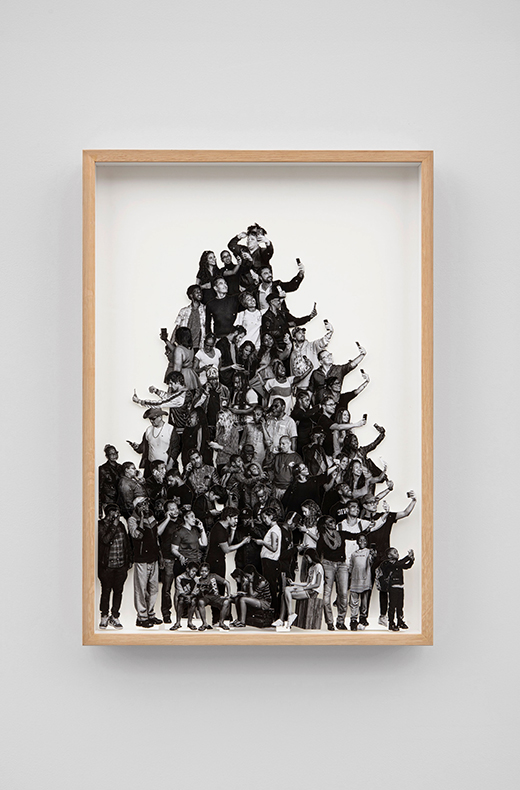 JR followed this up by visiting both Palestine and Israel during their conflicts, and took photos of people in each country who were working in the same field. Those portraits were then arranged side by side in what came to be called ‘Face 2 Face’ (2007). The project posed this serious question : When you can hardly tell the difference between people from these two countries, why should they even be fighting so much ? The portraits were displayed in several cities in the two countries.
JR came to be known as an outlaw of sort, for his projects were done without permission from local authorities. But TED conferences, in recognition of JR’s influence, named him the 2011 Ted Prize winner. It was a global recognition for JR. TED had previously awarded such renowned figures as Bill Clinton and Bono, and it gave JR high marks for his humanitarian messages.
He used the prize money to launch the ‘Inside Out’ project (2011~current), a global initiative that has allowed more than 400,000 people from aournd the world to upload their own photos. He has continued to do large collage and exhibitions, such as JR au Louvre (2016 and 2019) using the famous Louvre Pyramid, the Chronicles of San Francisco (2018) and the Chronicles of New York City (2019). 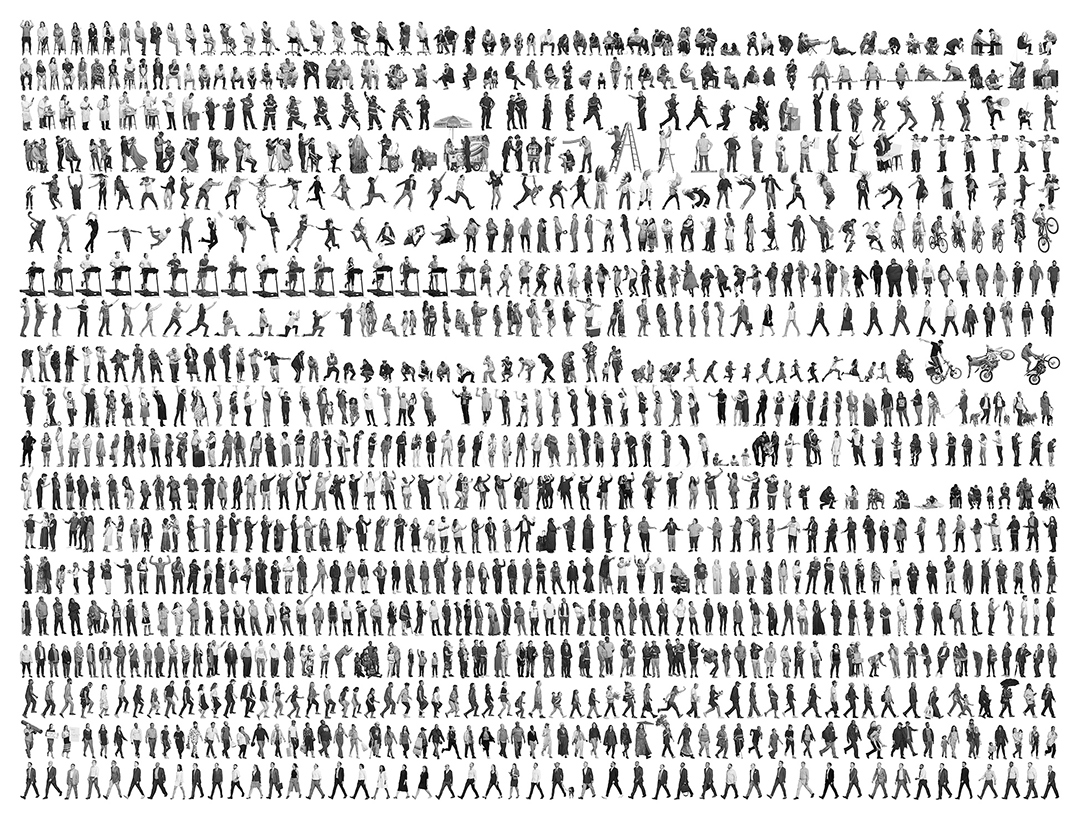 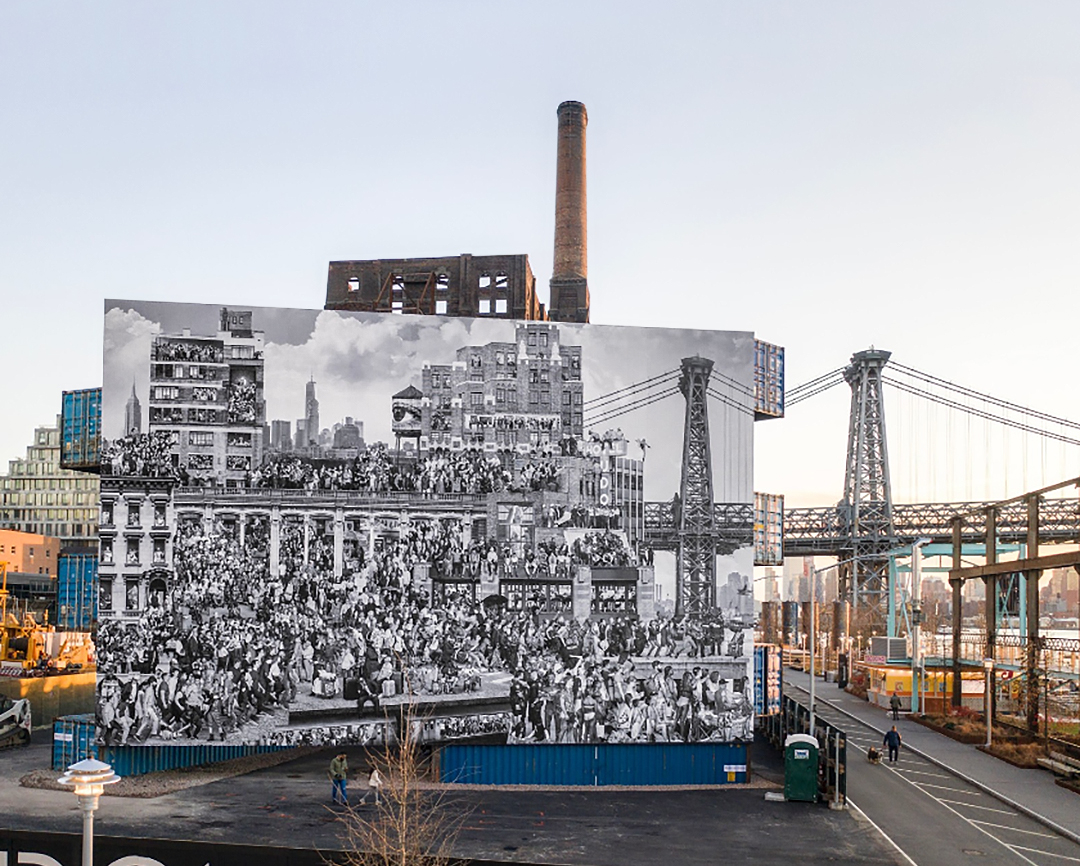 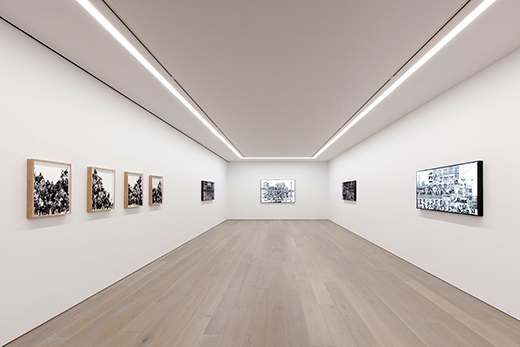 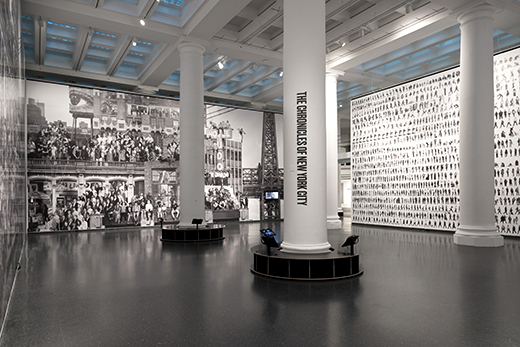 JR and New York
For JR, who has traveled all over the world for projects, New York is a second home, a place for both a breather and for work. It’s been about a decade since JR relocated to America, a country that provided inspiration for many projects. In 2017, JR took cues from murals by the Mexican artist Diego Rivera, and presented his ‘Chronicles’ series with San Francisco and New York. JR also took a closer look at fundamental problems in American today with projects such as ‘Migrants,’ (2017) which tells the story of immigrants, and ‘The Gun Chronicles : A Story of America,’ (2018) which deals with gun control issues.
The Chronicles of New York City features portraits of some 1,100 New Yorkers. The epic mural became the centrepiece of the retrospective ‘JR: Chronicles,' which opened at Brooklyn Museum in October 2019. The photos were shot in the same fashion as that for the Chronicles of San Francisco. A long trailer truck with a makeshift studio travelled across five boroughs of New York and photographed New Yorkers along the way. Those who were invited chose their own poses and recorded their own stories. And their life stories add so much life to the mural. Robert De Niro, the New York-based actor, is also featured, and trying to spot his face in the crowd could be a fun exercise on its own. 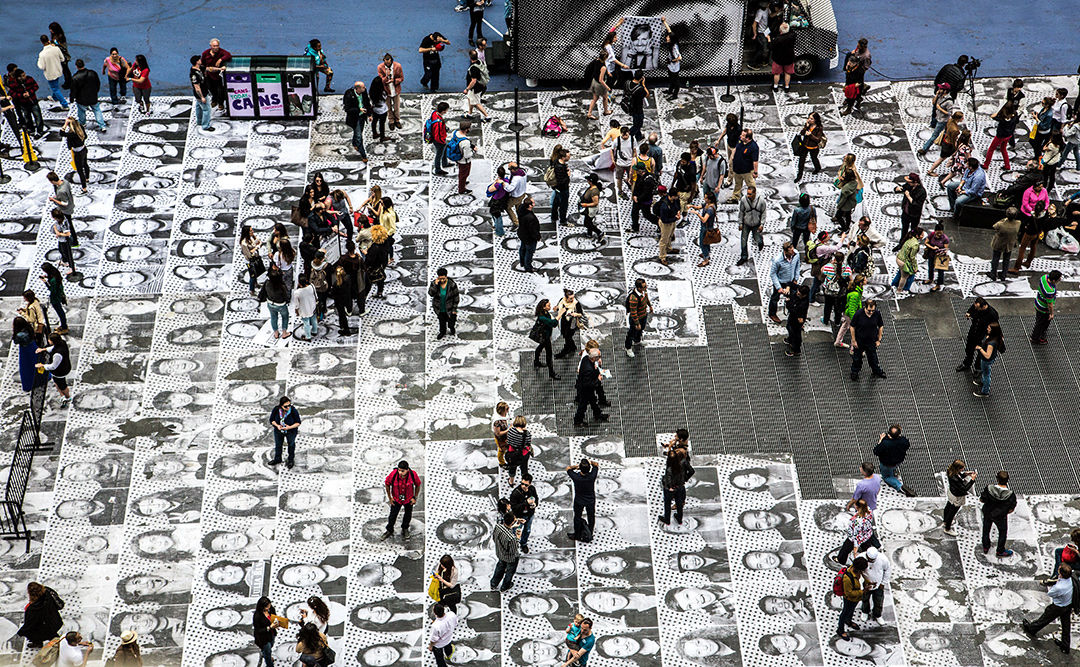 The exhibition had been scheduled to run through May 3, but it was suspended in the middle of March when the museum shuttered its doors during the city-wide, COVID-19 lockdown. Brooklyn Museum plans to pick up where it left off with the exhibition once the lockdown ends.
If you ever visit the museum, look for a 30-something man wearing sunglasses. JR is known to visit the museum from time to time to gauge people’s reaction. And that’d be your chance to meet one of the greatest artists of our generation. And if you’re so lucky, you may even get to take part in his project and let your voice be heard. 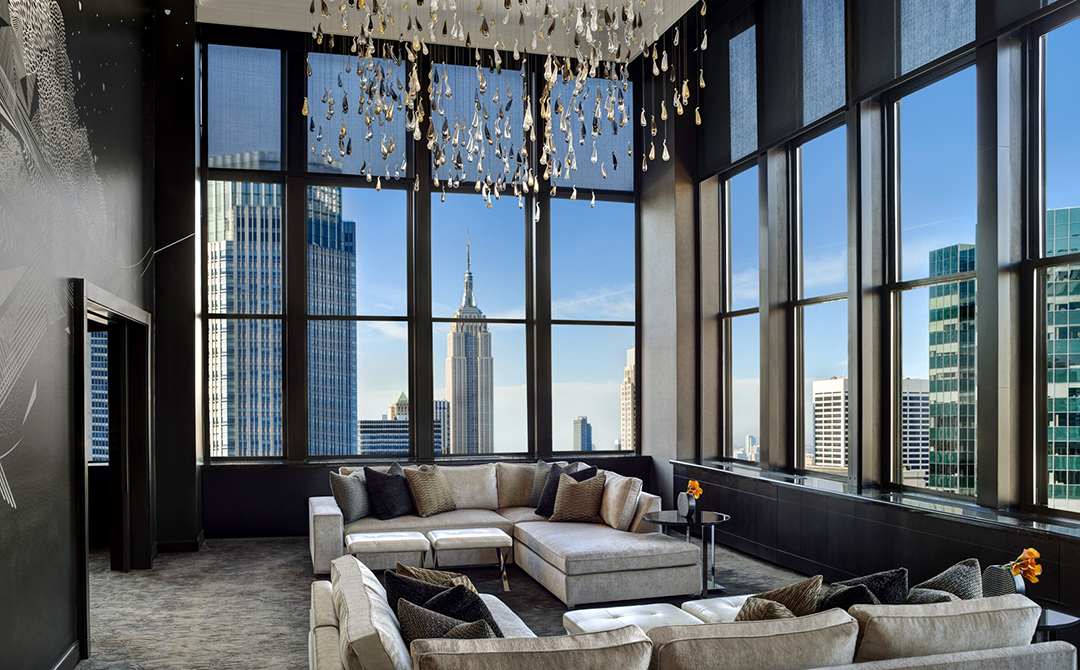 Where to Stay in New York: LOTTE NEW YORK PALACE
LOTTE NEW YORK PALACE brings together a 19th-century mansion by the financier Henry Villard and a state-of-art modern tower. The popular TV series and other films were shot at LOTTE NEW YORK PALACE, which has become a must-visit attraction in the Big Apple. It has 909 rooms, plus a gorgeous garden inspired by a 15th-century Italian cathedral, Villard Restaurant, luxurious salon Rarities, and cocktail bar Trouble’s Trust.