21 Days in St. Petersburg
New York-based fashion illustrator Kelly Beeman left for St. Petersburg for a new edition of Louis Vuitton <Travel Book> collection. She’s got 21 days in the Russian city to rediscover and interpret what’s familiar to the localities from a foreigner’s viewpoint. Want to find out what the cultural capital of Russia full of exotic scenes has instilled in the American artist and how she internalized it?
Scenes Between Familiarity and Difference
What would a city look like to the eye of an artist who finds herself in a foreign land? Louis Vuitton has been publishing books containing works by an illustrator or a watercolor painter who explores an unfamiliar city with a unique gaze. Since 2013, personal experiences by the artists in various locations including Barcelona, Los Angeles, Seoul, and Paris were recorded in their preferred medium. They were able to choose diverse approaches such as illustration, contemporary art, and collage to freely depict their experiences, and as a result, “The Louis Vuitton Travel Book Collection” compiles the interpretations of kaleidoscopic creative worlds and foreign lands by up-and-coming artists.

American fashion illustrator Kelly Beeman spent three weeks in St. Petersburg as she joined the St. Petersburg project for “The Louis Vuitton Travel Book Collection.” A self-taught watercolorist, Beeman has been adored for her sharp and bold lines and distinctive forms of her characters. Before visiting and seeing with her own eyes the historic Russian city, she merely thought that the city was an unknown place. In her imagination, it was filled with profound and mysterious energies, impressive and majestic details, and cultured citizens. These were the images she had formed in her mind to temporarily assuage her curiosity before the visit. On the day that her long-time wish turned into reality, it was a combination of downpours and gusty winds that welcomed her into St. Petersburg.
“When I arrived in St. Petersburg for the first time, it was raining hard and extremely windy. But nonetheless I utterly fell for the color of the city on that day. People were carrying bright-colored umbrellas, which were swayed by the strong winds, and that scene struck me. It was the moment I, as an illustrator, felt the city had a distinctive color.”
Perhaps that's why her drawings often include a figure holding an umbrella or passing by leisurely in a raincoat. It may be a familiar and common scene in St. Petersburg, but to Beeman, it was a moment that encouraged her to observe and explore more.

Recording Journey
Golden spires and decorative statues, the Neva River running across the downtown, stately Neoclassical cathedrals, and a myriad of traces left by writers and musicians. These are some of the universal images people have of St. Petersburg. A blend of various cultural trends were embedded in ‘Russia’s Second City’ during its emergence as the center of politics and economy.
Beeman chose to quietly retrace the rapid growth and transformation of St. Petersburg. “There still exists a dichotomy. On one hand, you find the elaborate, dignified Winter Palace telling you about imperialism, romanticism, and Neoclassicism. On the other hand, you see gigantic prefabricated apartment buildings from the Soviet era. The odd resemblance between the two scenes embracing opposite ideologies is intriguing and overwhelming.”
The atmosphere of St. Petersburg portrayed by Beeman is vibrant and alluring. The city’s bright red buildings on her canvas purvey these sentiments effectively, and also seem to signify the varying ideologies represented by each of them. As a matter of fact, she has said that her inspirations come from a certain ‘period’ in time or a ‘change of the times.’ It’s because graphic design features such as the black-and-white contrast or simplified curves, which are typical during a period of transition greatly appeal to the artist. 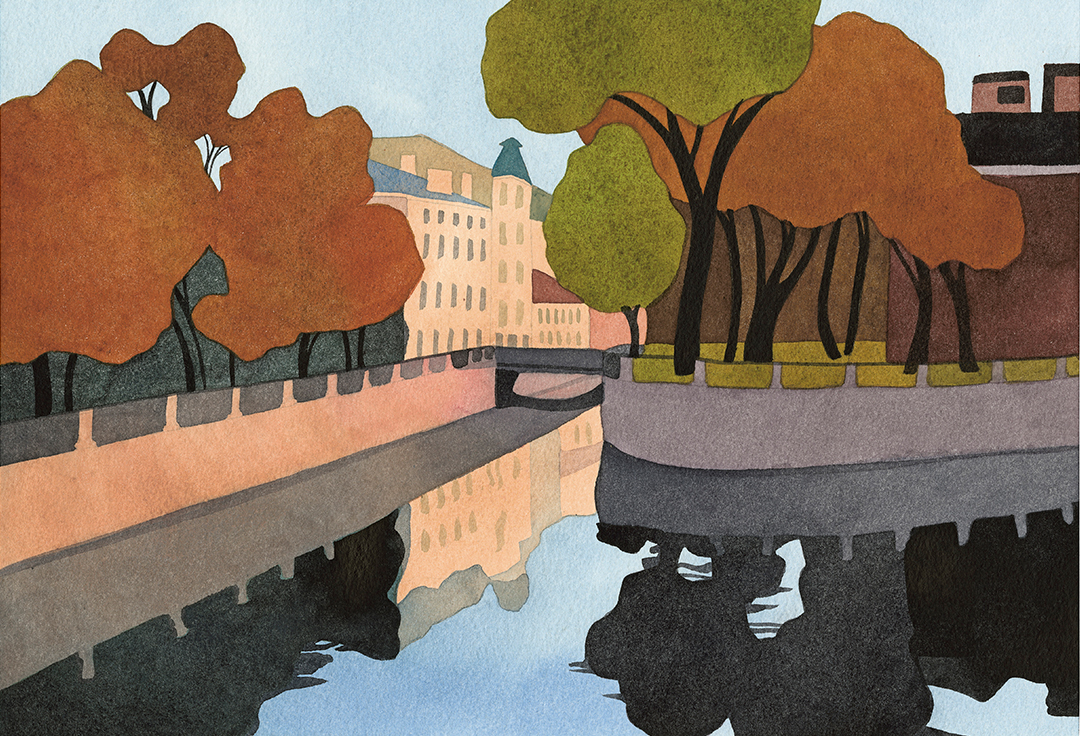 Beeman took pleasure in interpreting and understanding each corner of the city as an outsider, as she repeatedly visited dance schools, bold-colored palaces, golden-domed churches, and the promenade along the Fontanka River. How did she think of this foolproof and innocent way of traveling? She intentionally avoided researching the city before the trip. Rather than pre-arranging related images or thoughts, she wanted to be open and spontaneous about any kind of experience the city offers to her.
“I usually like to keep a fully open mind when I go on a trip. I pay all my attention to the surroundings, and look for a change in myself. As an artist, I find it interesting to capture an aspect of a city, a chance encounter with a landscape, and an ordinary moment in daily life.”

City of Love, Experience, and Inspiration
As it is fashion that inspires her the most, we cannot miss out on the fun of watching fashion in her works. Elegantly-dressed people of St. Petersburg in her illustrations are eye-catching, and they lead you to imagine the actual someone who is in that scene. For that reason, her adventure and art focus on people.
“To me, fashion is a tool to emphasize the personality of a character I create. It could show what the character is like. It connects the story, preferences, thoughts, and context of the character. In addition, most of the characters in my painting look at each other and exchange glances. That’s very important to me since it means they want to get closer to someone or something.” 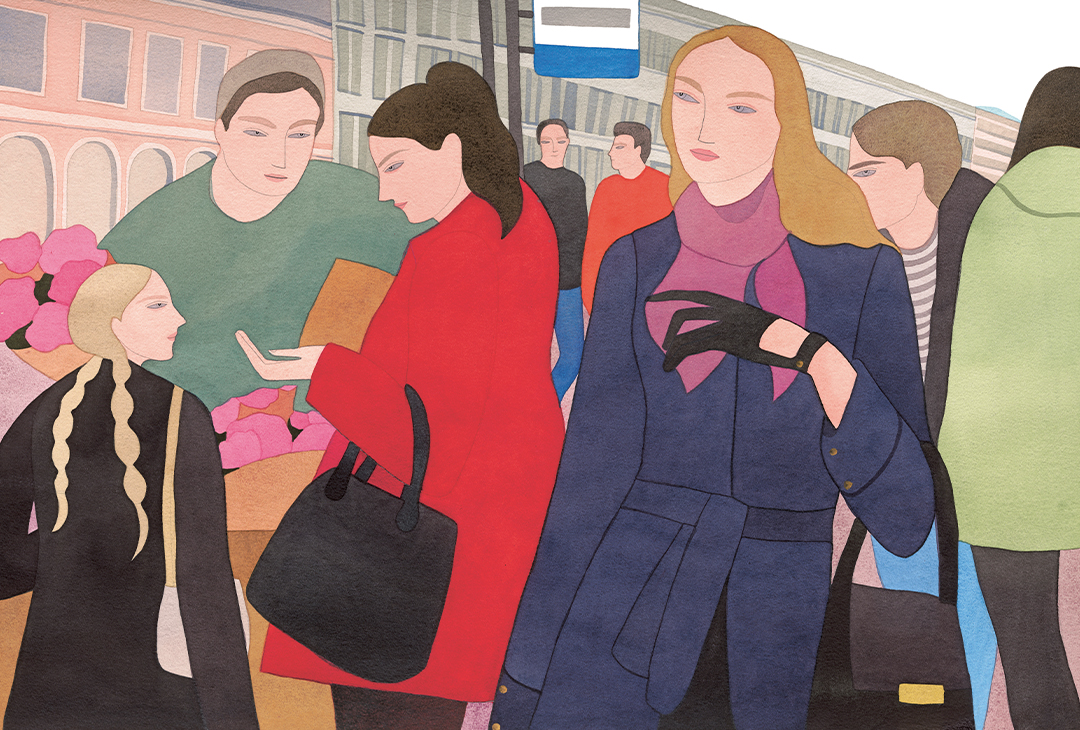 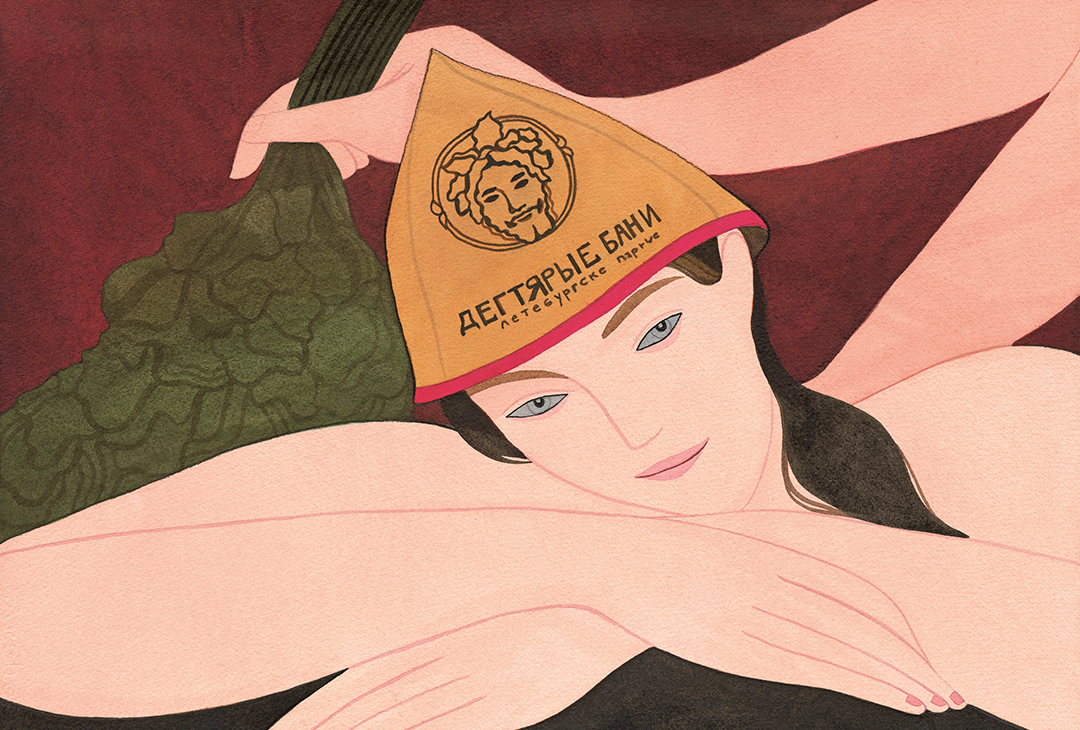 Beeman recollects the myriad of eyes she’s seen in St. Petersburg. As she felt an urge to be closer to them, she ironically felt like a complete stranger. In order to ensure that she would carry back home all of the memories created in the Russian city, the artist chose to keep her raw, untouched emotions. For three weeks, she worked on numerous sketches and writings to solely concentrate on St. Petersburg. From the ideas that could vaporize at any second, to what she felt was great and earmarked for her future illustrations, she’s recorded every moment in detail in a chronological order.
“I wish this city would be an exclusive theater for my works.” Beeman finally fell in love with St. Petersburg as an artist, traveler, and foreigner. Her experience of the infatuation with the city itself became a source of inspiration for her. The short but long 21 days in St. Petersburg was thus released in the form of a travel book. Records are, after all, someone’s views. You can indirectly experience the perspective that pierced through the recorder. It’s now time to examine the pieces that make up Kelly Beeman’s St. Petersburg.