Hanoi and Sustainable Architecture, in the Words of Architect Hoang Thuc Hao
Hoang Thuc Hao, the leading force in sustainable architecture, hails from Hanoi. We sat down to discuss Hanoi, urban architecture and history behind it.
“Hanoi is such a beautiful city and a place with infinite promise,” says Hoang Thuc Hao, the face of Vietnamese architecture who is rewriting Asian architectural history in his 28th year in the craft. Born and raised in Hanoi, Hoang still works out of Hanoi. He studied architecture in Italy and has traveled all over the world for major projects. But Hanoi remains dear to Hoang’s heart. Soon after returning home from his studies 17 years ago, Hoang founded his architectural office 1+1>2, and began teaching in the Department of Architecture and Urban Planning at Hanoi University for Civil Engineering. Hanoi is at once Hoang’s home, his workplace and his source of inspiration. As he spoke about Hanoi, Hoang’s face said it all. He absolutely loves his hometown. 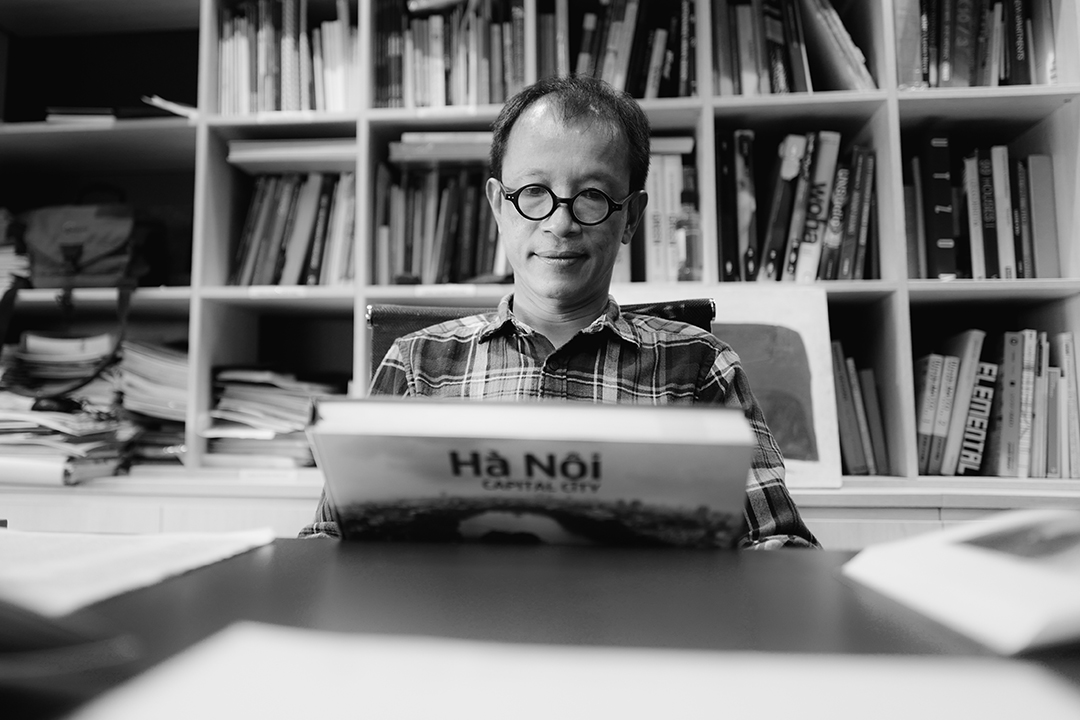 “Architecture is not merely buildings and space. It is happiness.”
Hoang Thuc Hao, Architect

Hoang Thuc Hao has been sweeping up prestigious architectural awards for decades, starting with ‘Interarch Laureate’ in 1994 and culminating with ‘Vassilis Sgoutas Prize’ at the 2017 International Union of Architects (UIA). More so than those trophies and accolades, it’s Hoang’s philosophy and conviction in architecture that makes him stand out. As a pioneering figure in sustainable architecture, Hoang is famous for designing buildings that are environment-friendly while also taking into account distinct local features and cultural diversity. 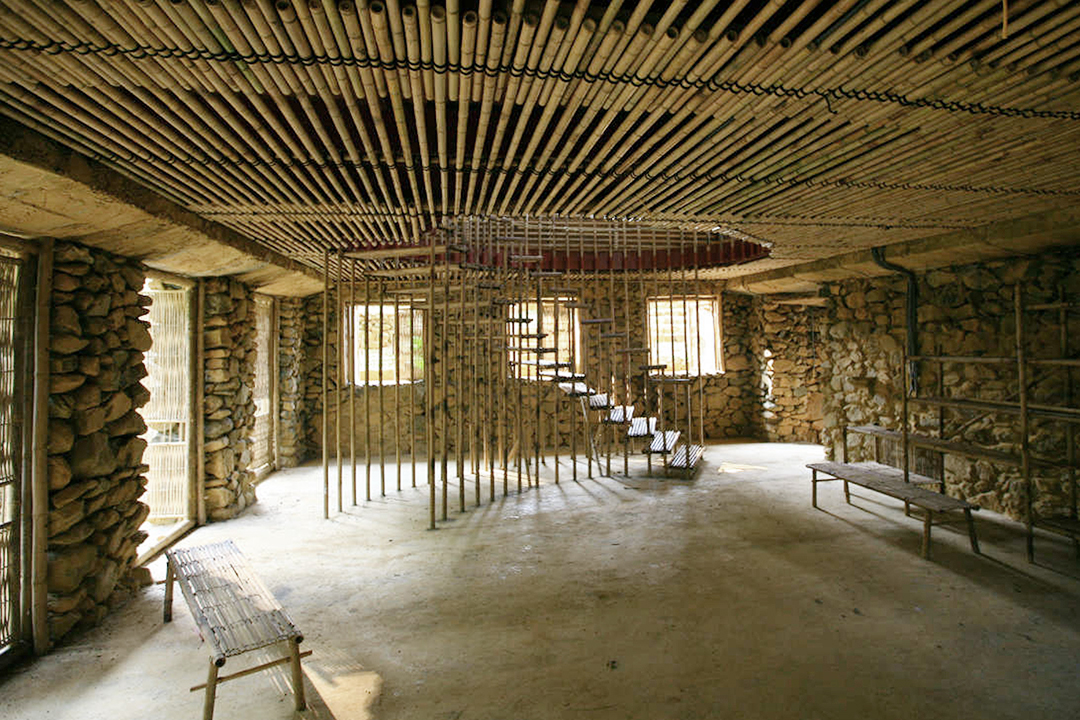 Q. What do you value the most in architecture?
A. First of all, it has to be for people. Secondly, cultural diversity must be considered and utilized. And thirdly, you must avoid monotony at all costs. And in order to do that, you need different sources of inspiration. It starts with respect for local topography, geographical features, climate and local culture.

Q. You’ve designed many buildings for the minorities. Is that connected with cultural diversity?
A. Vietnam is a multiethnic nation made up of 54 ethnic groups. Each of them has its own, unique cultural assets. And I want to preserve those beautiful values in local cultures and make them shine even more brightly. I combine natural materials and vernacular architecture from the lands of these people with modern technologies and design. That leads to the modern structure based on the architectural style unique to the specific region and ethnic group. 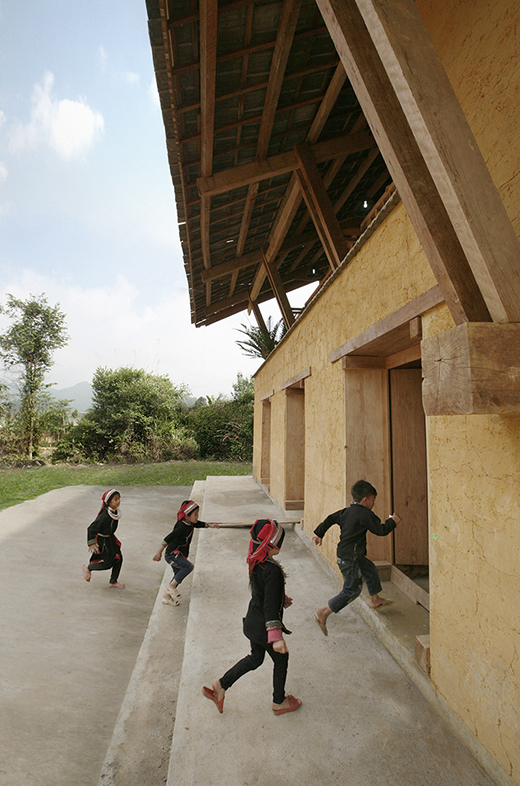 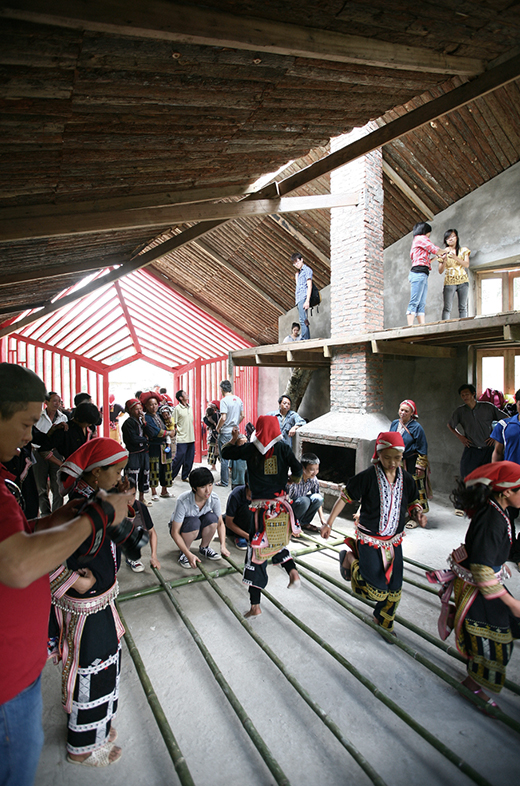 Q. You’ve completed many public architectural projects for the disadvantaged communities and people. Do you have specific reasons for that?
A. During my practice, at the very beginning stage, I have realized the lack of attention to disadvantage communities in many aspects. With the rapid urbanization and haste development, many neglected areas have been either over-exploited, or have been left isolated and poor, with lack of communication and education. I wanted to contribute to solving this issue. But I came to realize that architecture itself cannot resolve the issue. Therefore, my approach is to aggregate different resources: architects, NGOs, social groups, local communities, university and institutions, to help build projects together for disadvantage communities. We come together with a good intention and share what we have with others. And by running these projects, I felt a deep sense of happiness from building connections with people. It also showed me the unlimited ability of architecture to raise happiness. 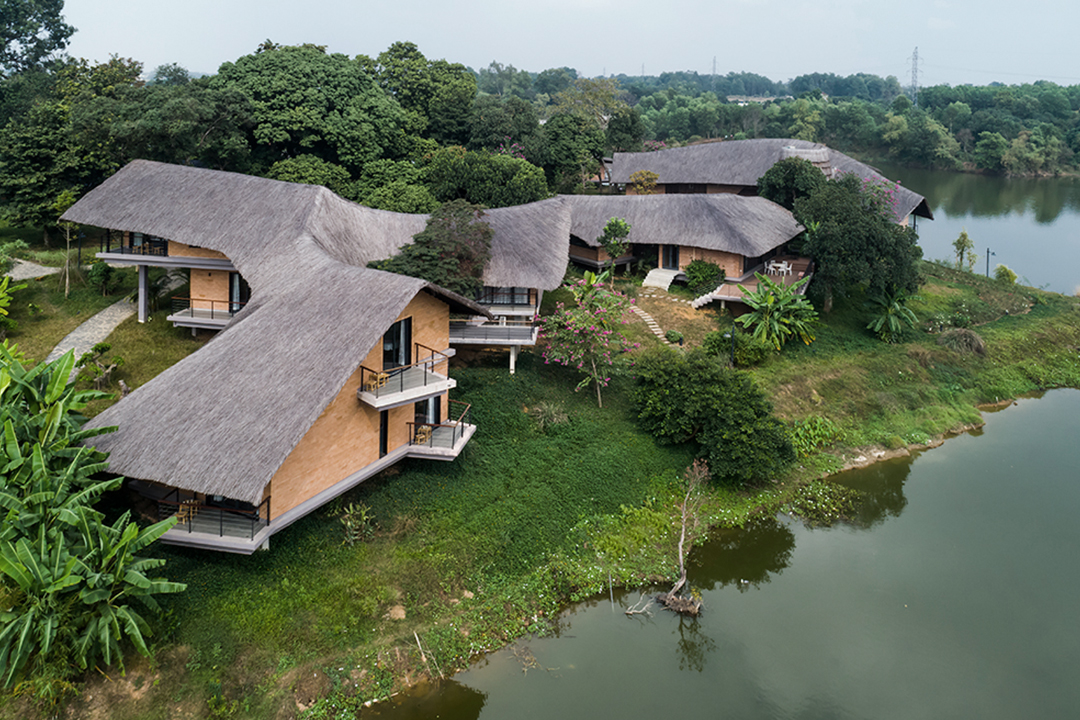 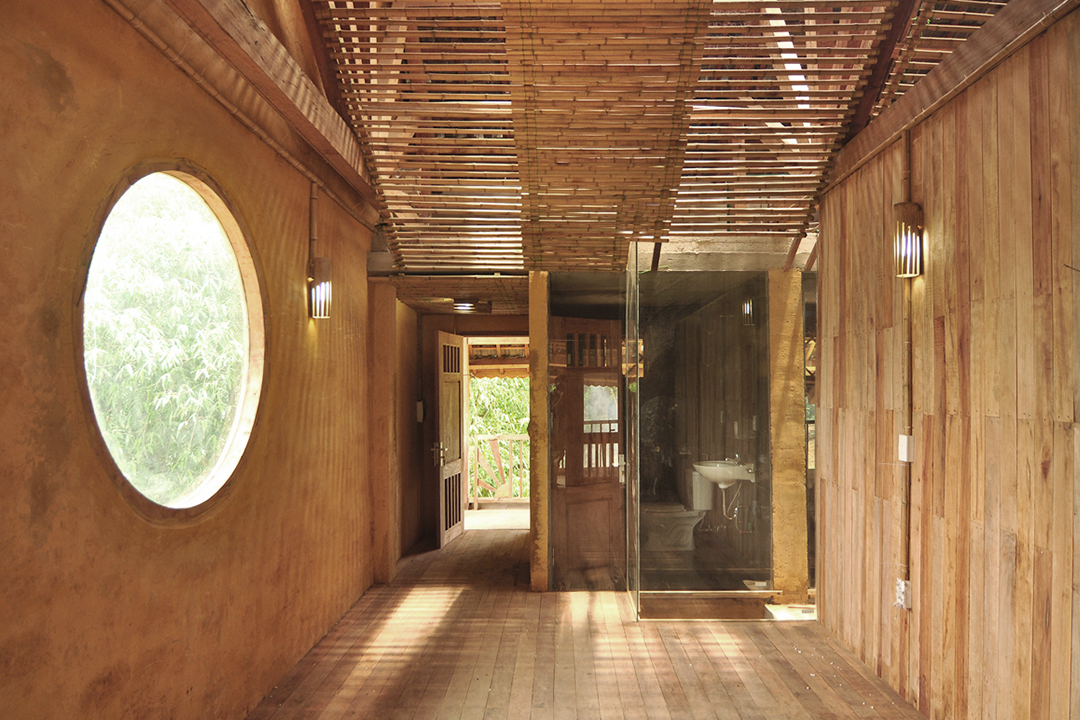 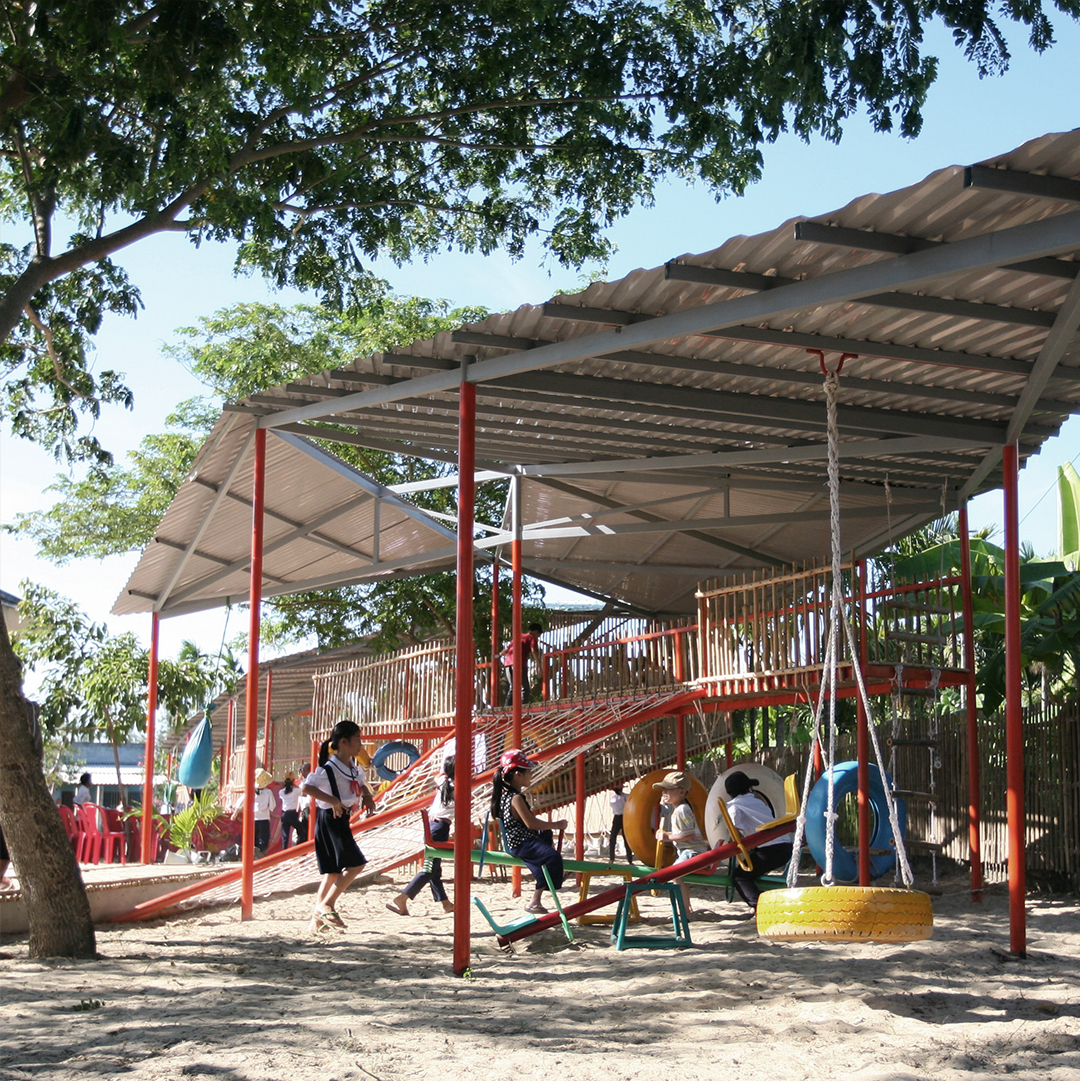 HoiAn Thanh Tam Tay, one of the public architecture projects for the disadvantaged © Hoang Thuc Hao

Hoang has never stopped dreaming. Though he has long established himself as a well-respected architect, Hoang continues to act on dreams he’s harbored since his younger days, challenges himself to test the limits of possibility, and tries to do everything he can as an architect to make this a better place for all to live. Hoang turns infinite potential into reality on the ground and builds a platform for humans and nature to create harmony. Hoang keeps walking on the streets of Hanoi today, dreaming of a better tomorrow. 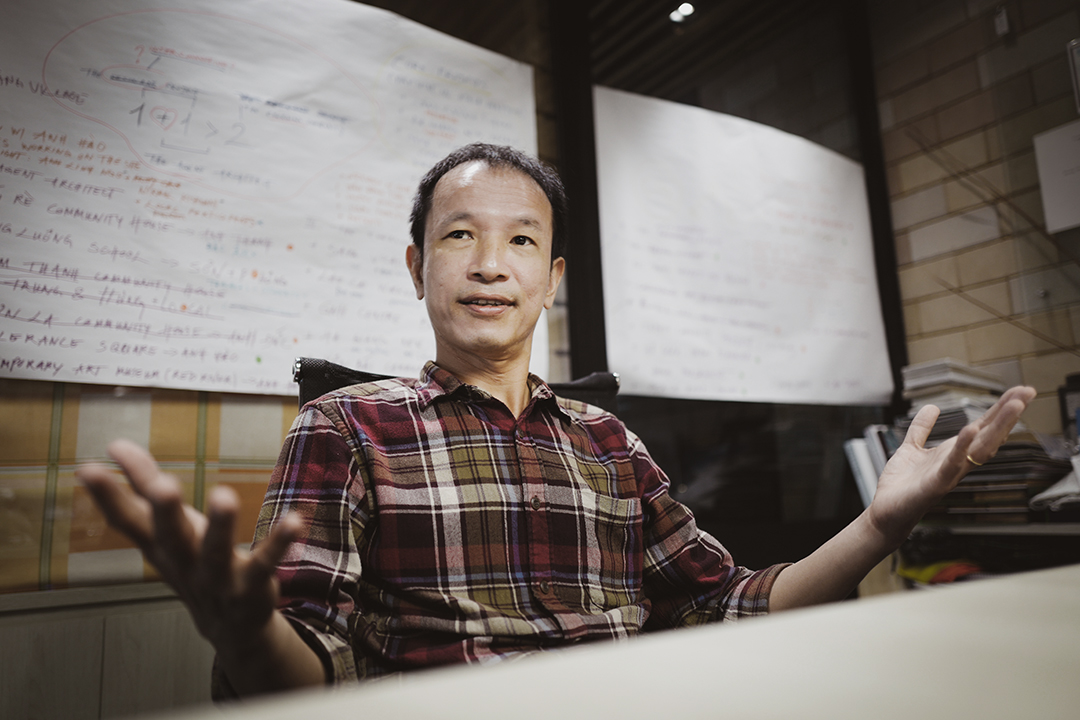 “Architecture is life. It’s all around us and we spend time with it every day. Architect is the one who helps to raise the community’s awareness and creates sustainable surprise. Architecture should be for kindness, humanity, and sublimeness.”
Hoang Thuc Hao, Architect 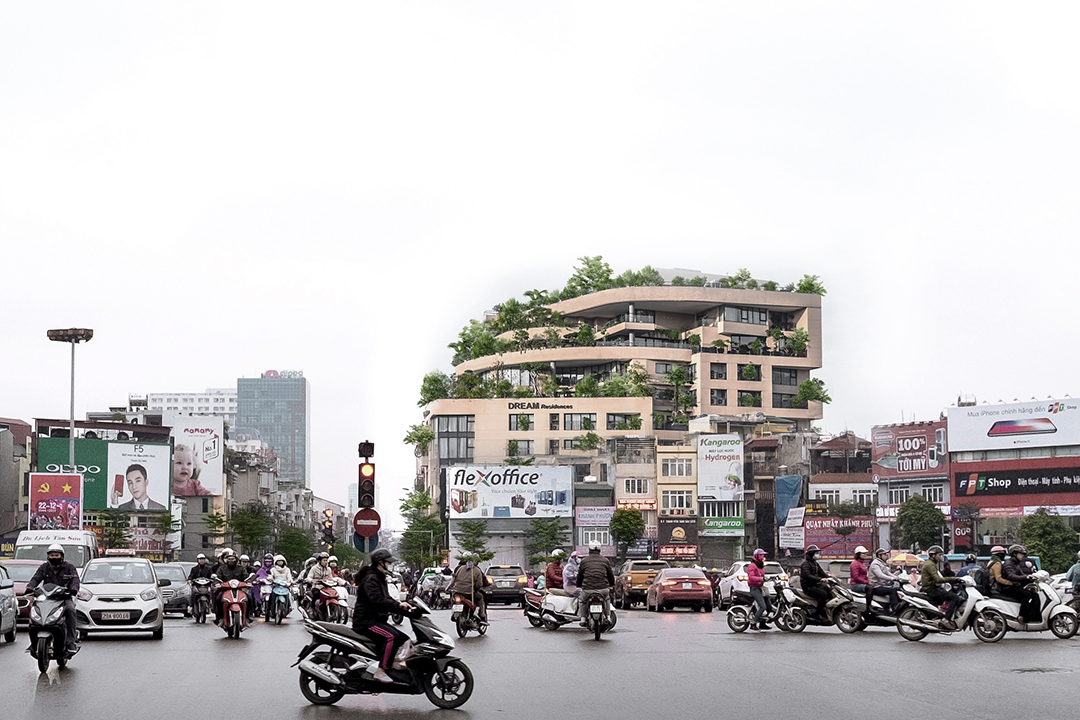 Architect Who Creates Landscape in Hanoi
These are some of the great buildings and historic landmarks created by the great touch of Hoang Thuc Hao.
1. Recreating Tradition: Dream Residences and Bat Trang Pottery Museum
Hoang Thuc Hao has always stayed true to the tradition. But he doesn’t just hold on to it or blindly copy from it. He recreates traditional heritage by applying it to the modern society. He identifies core values of the tradition and modernizes them without compromising their context and flows. Hoang’s works are renowned for their precision and brilliance. 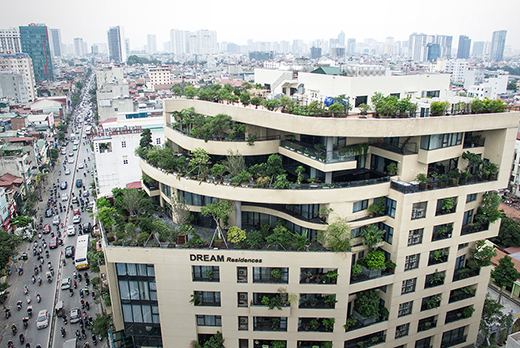 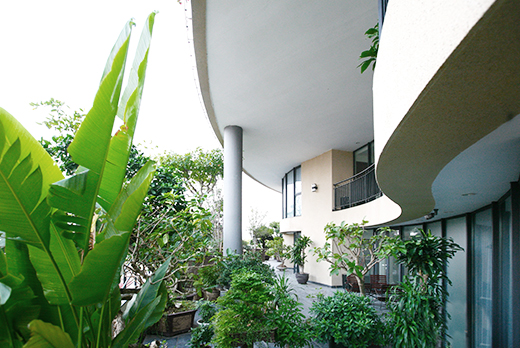 •Dream Residences
According to Hoang, Hanoi has long had environmentally-friendly topographic features, as it’s surrounded by water and large trees grow all over the place. Hanoi was also a tightly-knit community. But amid rapid urbanization, Hanoi has lost some of those traditional values.
Dream Residences started from the idea that Hoang wanted to breathe life back into those eco- and community-friendly values inherent in Hanoi by building a vertical village. Floors have been built in different forms of curve and they’re stacked on top of each other in crisscrossing fashion. It takes the shape of how old villages were set up. The building is filled with plants, which serve as habitats for many different forms of life. Fruit trees provide food, too. Dust and noise are efficiently filtered. Trees provide natural shades for residents. The building faces southeast, allowing for the optimal amount of natural light to fall, and the rainwater harvesting system is in place. By taking down the barrier between inside and outside, Dream Residences serve as the green oasis in the middle of a bustling city, capturing the imagination of the people in Hanoi.
Address 64 Nguyen Luong Bang, Dong Da, Hanoi 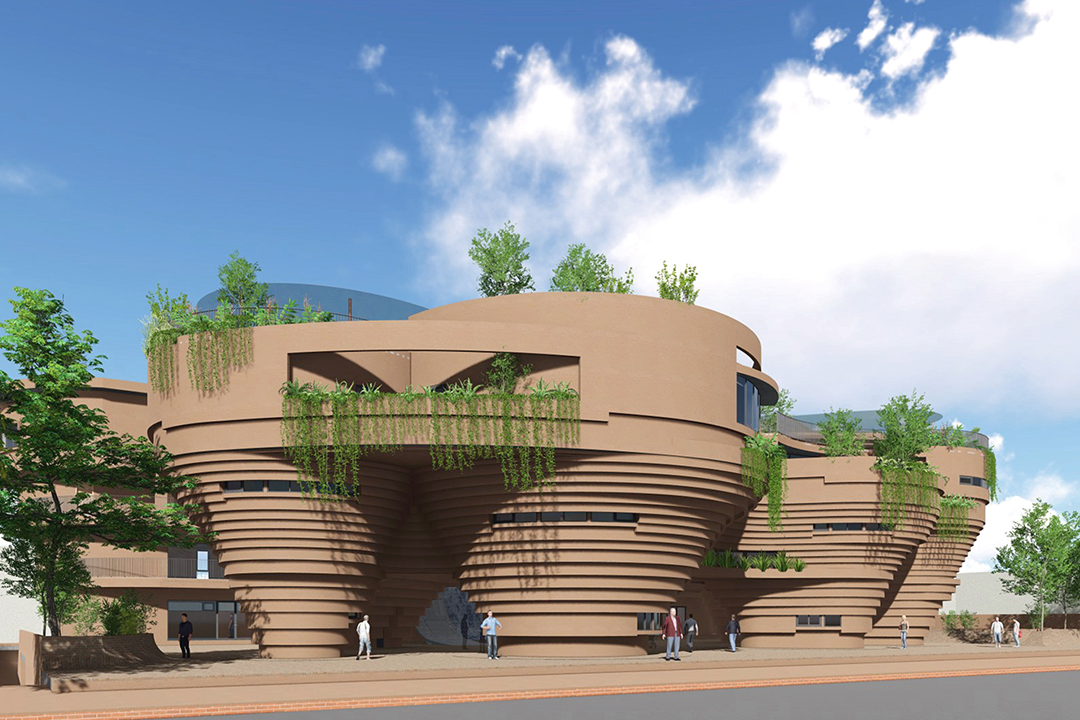 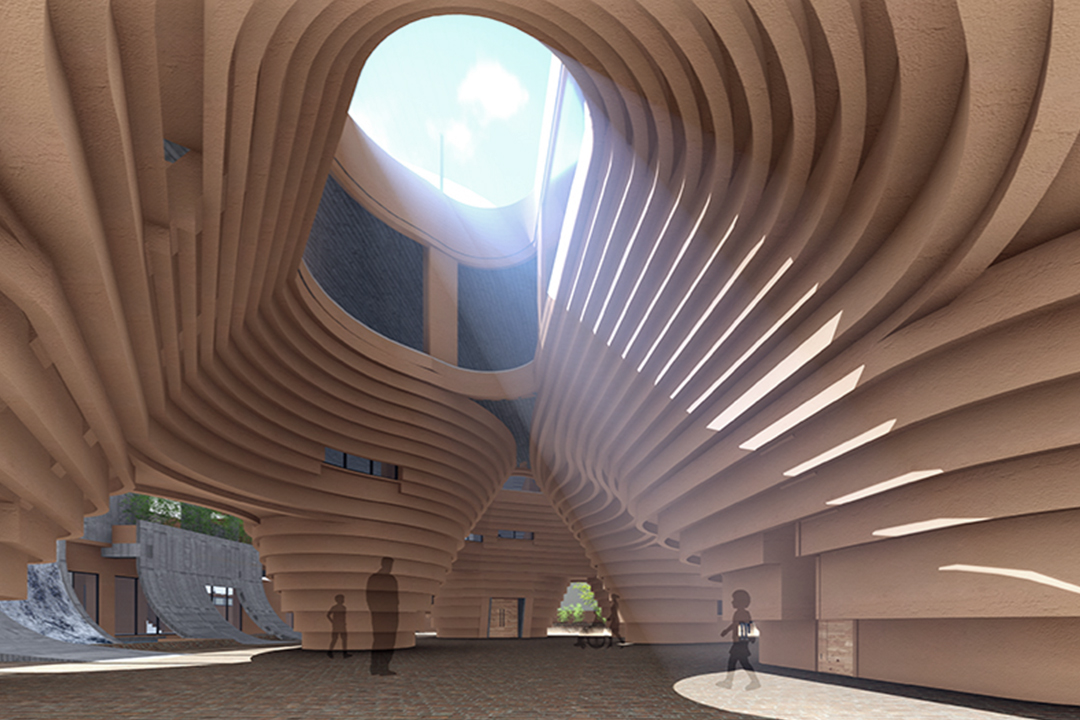 •Bat Trang Pottery Museum
Hoang noted how Hanoi is home to several pottery communities. And Bat Trang, with 1,000 years of history, is hands down the finest pottery village in Vietnam. And a new landmark will be built that will carry on the proud tradition. It’s Bat Trang Pottery Museum, Hoang’s latest project.
Hoang said, when designing a building in Hanoi, it’s crucial to make the most of water, considering how there are plenty of rivers and lakes. The new museum will stand along the Bac Hung Hai River. The area used to be a market for boatmen and people on the land who traded goods with one another. Hoang tried to recapture the lively scene where the pottery village and the market came together. The design of the building represents seven spinning wheels, which in turn serve as a symbol for layers of tradition. The museum is scheduled to be completed in December.
Address Bat Trang Pottery Village, Hanoi 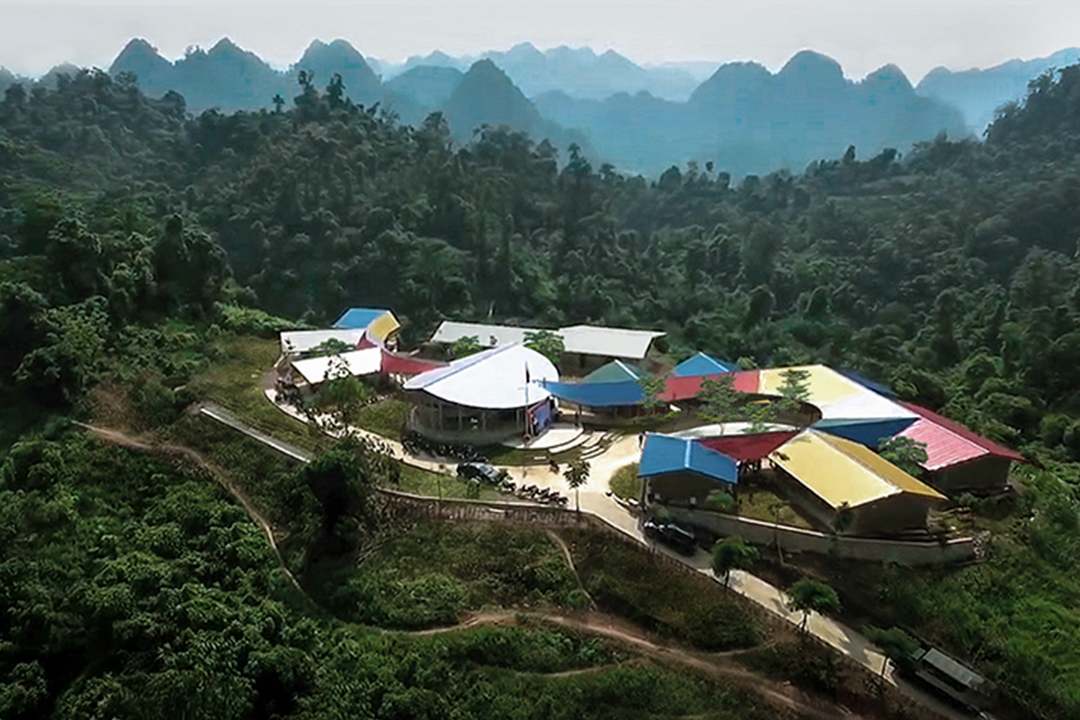 2. Architecture That Nurtures People: Sentia School
Hoang takes a great interest in space for children. For over a decade, he has volunteered to build schools and playgrounds for underprivileged kids. Today, he’s putting up four schools in villages in the mountains. He tries to create a building that fosters the growth of both the body and the mind. 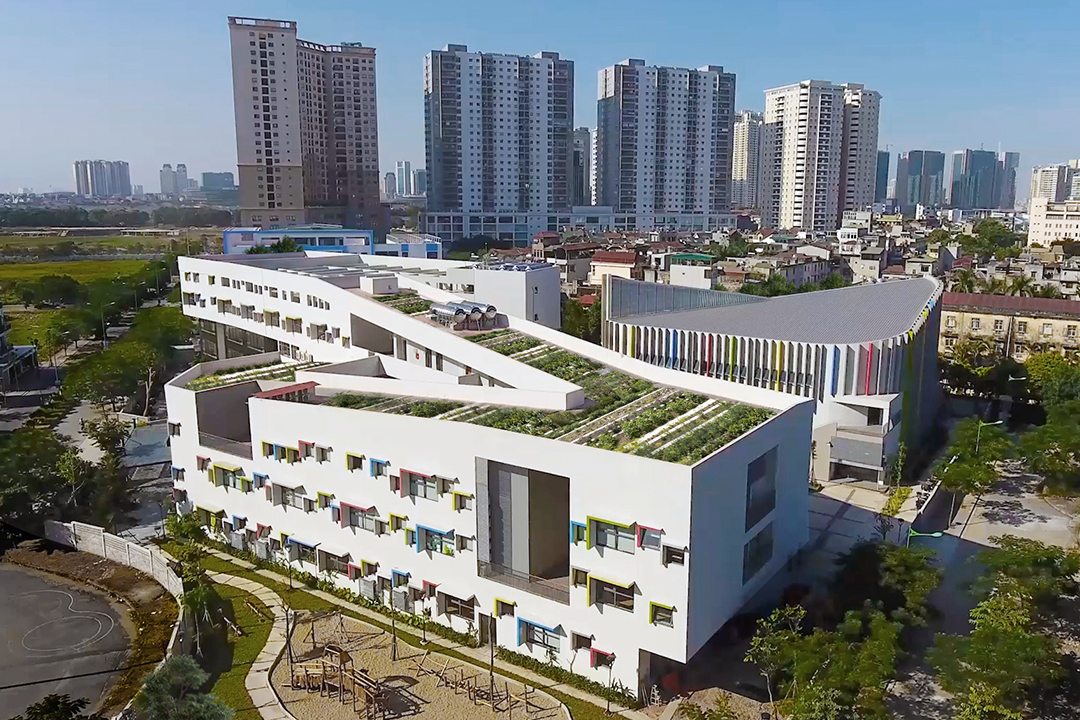 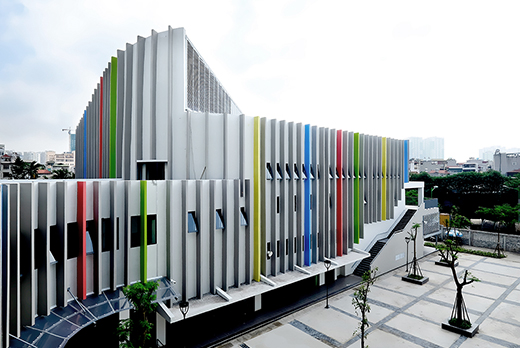 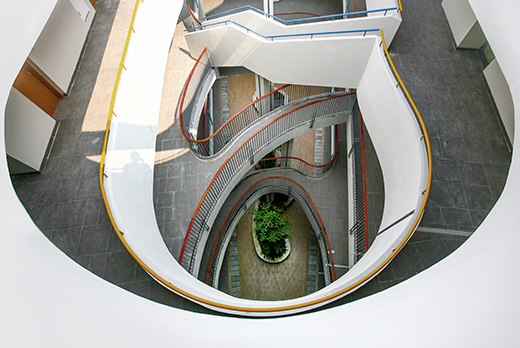 Among schools Hoang built in Hanoi, Sentia School is the most famous. It consists of the kindergarten, elementary and middle school, and sits on an asymmetric site surrounded by skyscrapers. To make the school buildings fit, Hoang designed them in a zigzag form. An additional benefit is that it gave Sentia School enough areas that could be turned into green space. The playground, the gym and the cafeteria sit at points where the wind blows out, which allows for efficient noise control. Since these schools are for children, Hoang tried to add some levity to them, with the windows coming in different sizes and colors. The hallways inside the buildings take the form of a curved roof for some visual stimulation. 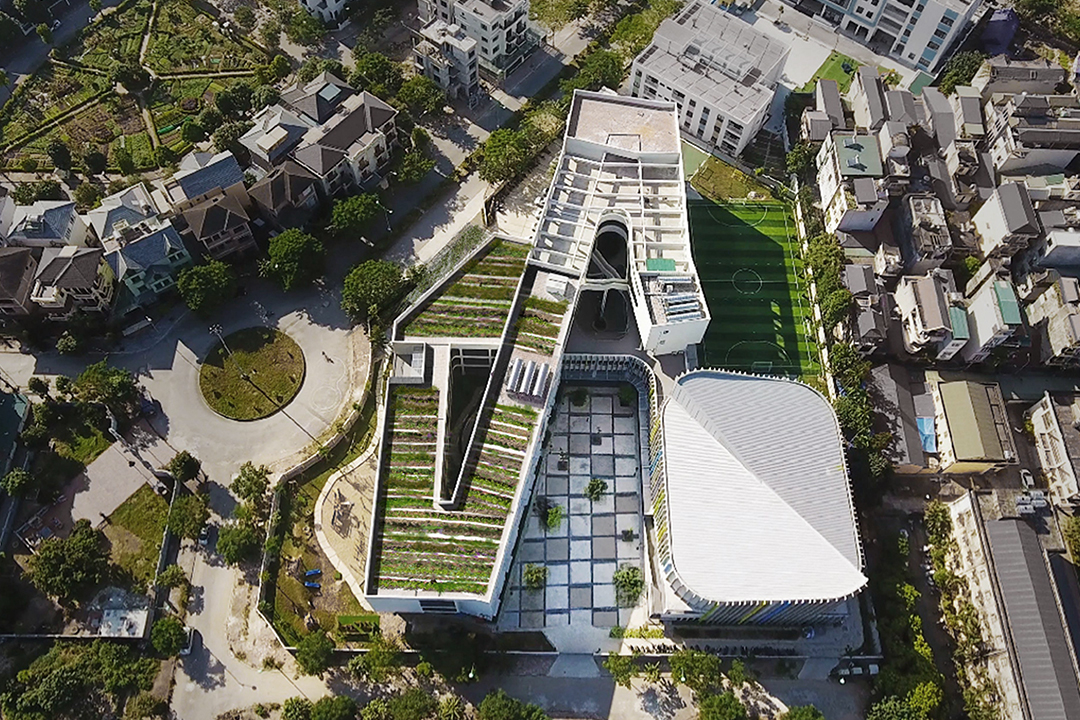 There are elements of green architecture, too. The rooftop garden is filled with a wide variety of plants, satisfying students’ curiosity in biology and also blocking off the sun’s heat while filtering out pollutants. The small play gardens built in between classrooms are well-lit and ventilated, and provide a buffer for noise control. Neighborhoods around the school benefit from them, too.
Address Trung Van, Nam Tu Liem, Hanoi
3. City’s Dream: Hoa Lo Prison
People in Hanoi refer to the area south of the Hoan Kiem Lake as the French Quarter. The neighborhood was occupied by the French during France’s colonial rule from 1883 to 1945. And it’s also home to the Hoa Lo Prison, which preserves scars of history. 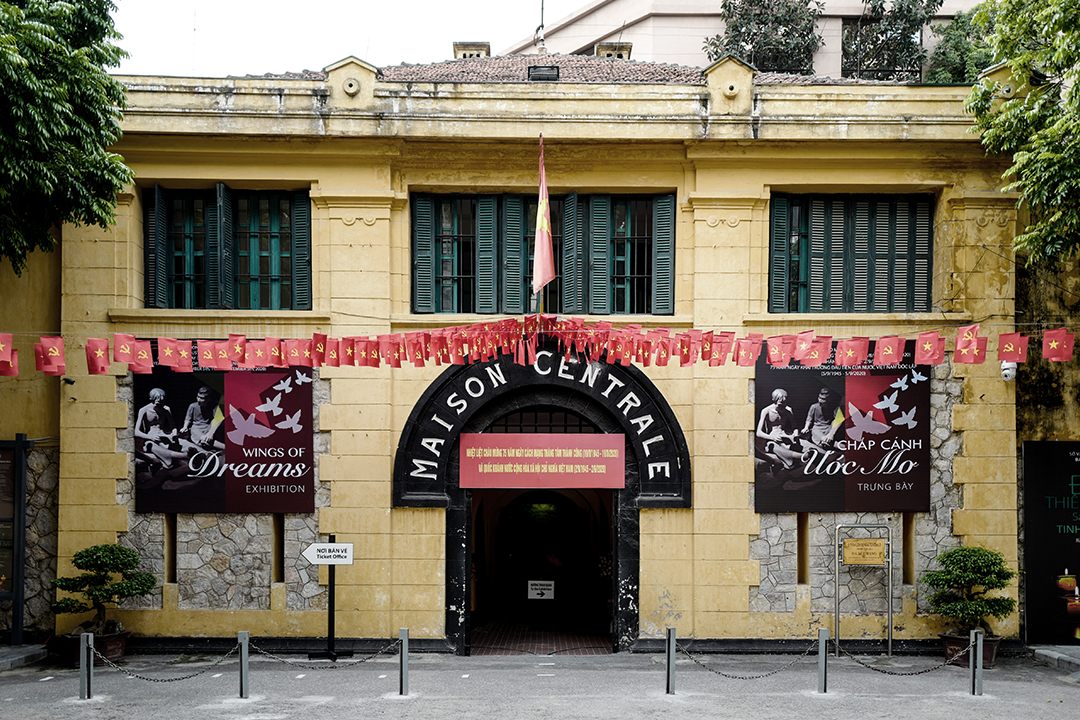 The Hoa Lo Prison was used by the French colonists to hold Vietnamese political prisoners. The yellow stone walls and the black gates are remnants of the suppressed times. The locals at the time called these gates ‘the mouth of the monster.’ During the Vietnam War that began in 1964, the prison held U.S. prisoners of war. It’s home to painful periods in the modern Vietnamese history, marred by the colonial rule and the war. Only parts of the prison have been preserved and have been turned into a museum. 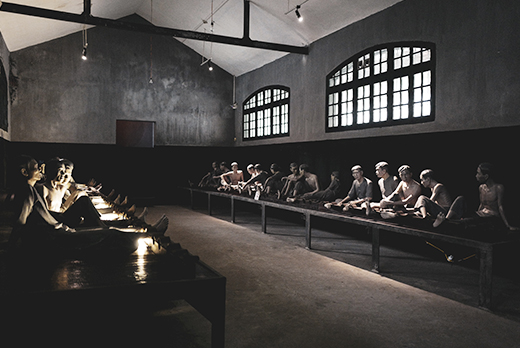 A replica of the prison © Jeon Haein 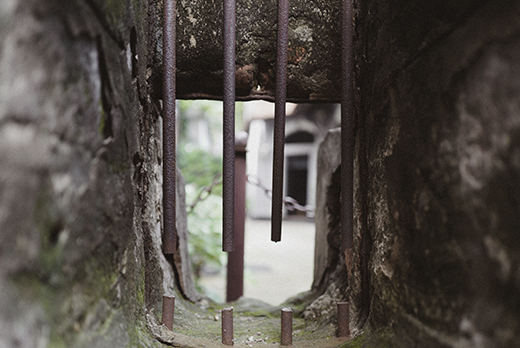 There are still traces of the old prison. © Jeon Haein

Hoang has a special history with the place. In the early 90s, Hoang dreamed of building an open plaza that represented peace on the site where the prison once stood. He wanted to bring peace and freedom to a place that once endured violence and oppression. This ambitious idea, titled ‘Square of Tolerance,’ earned an international prize, “Convivial Spaces,” at the International Ideas Competition (UIA) in Paris in 1996. 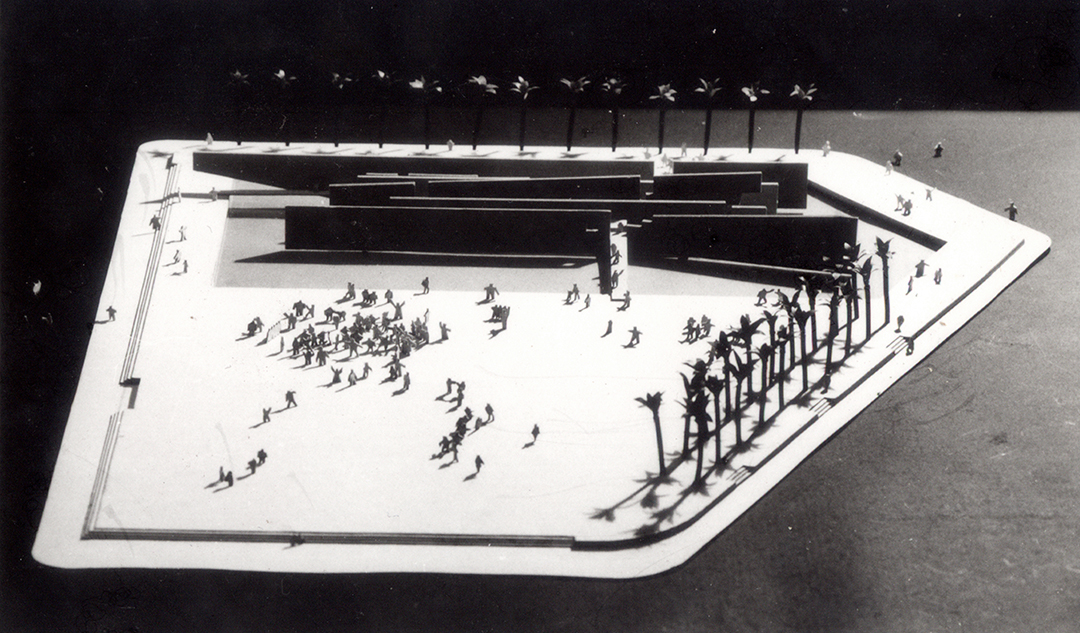 Design plan for the Square of Tolerance © Hoang Thuch Hao

Unfortunately, a skyscraper went up in that site. But Hoang’s project compelled us to reflect on what makes for appropriate architecture. To see the latent possibilities within cities; to seek ways that achieve the harmony of the human and the nature, and the tradition and the modern, in an urban setting where humanity could easily be lost; and to have humanity restored and community revived… This is where architecture should be headed.
Address 1Hoa Lo, Tran Hung Dao, Hoan Kiem, Hanoi
Phone +84-24-3934-2253