Jean-Michel Basquiat, Like James Dean or Picasso
A genius, graffiti art, and untimely death may simply put into words the life of Jean-Michel Basquiat. His works are coming to Korea to be featured in the first-ever large-scale exhibition in the nation. It will likely be the last opportunity to see Basquiat’s art in person in such a large volumn for the time being.
“What is your subject matter?
Royalty, heroism, and the streets.”

During an interview between Basquiat and art critic Henry Geldzahler

Jean-Michel Basquiat’s 1982 painting ‘Untitled’ was presented at Sotheby’s in 2017. The participants frantically raised their paddles, driving up the value of the contemporary work. It finally sold for $110.5 million, approximately 130 billion Korean won.

Beginning the article on an artist by mentioning the record-shattering bid may come off as snobbish but it really is not mammonism. In the art circle, the price of artwork is what defines and embellishes the artist.

In that sense, the name of Jean-Michel Basquiat is the ultimate representation and brand in itself. He has become the artist whose works sell at the highest figures and whose exhibitions still attract a huge crowd. 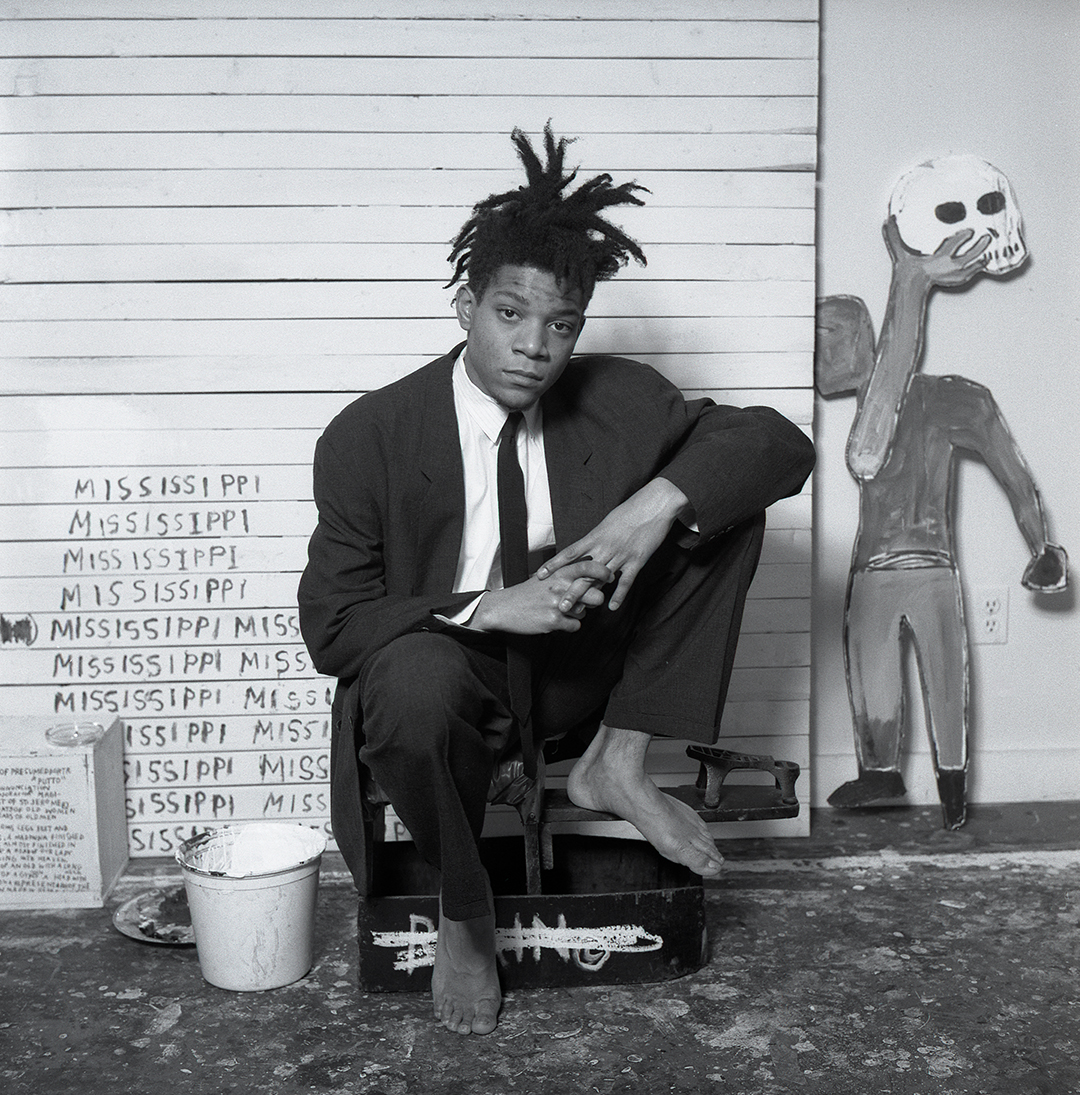 Who? Basquiat?
One of the most common misunderstandings about Basquiat is that he must have grown up in an unfortunate, underprivileged environment. The presumption, sadly, is based on the fact that he is an African-American artist with an extensive graffiti portfolio. The truth is he came from a middle-class family. His father was an accountant and his mother was a fan of paintings and art in general.
Basquiat was born in Brooklyn, New York in 1960. His mother took him to art galleries during his childhood, offering him a substantial amount of experience in the field of art. To Basquiat, art and mother were two concepts that stayed connected at all times. She proved influential particularly in regards to his determination to become an artist after seeing Picasso’s ‘Guernica’ with his mother for the first time at New York’s Museum of Modern Art. 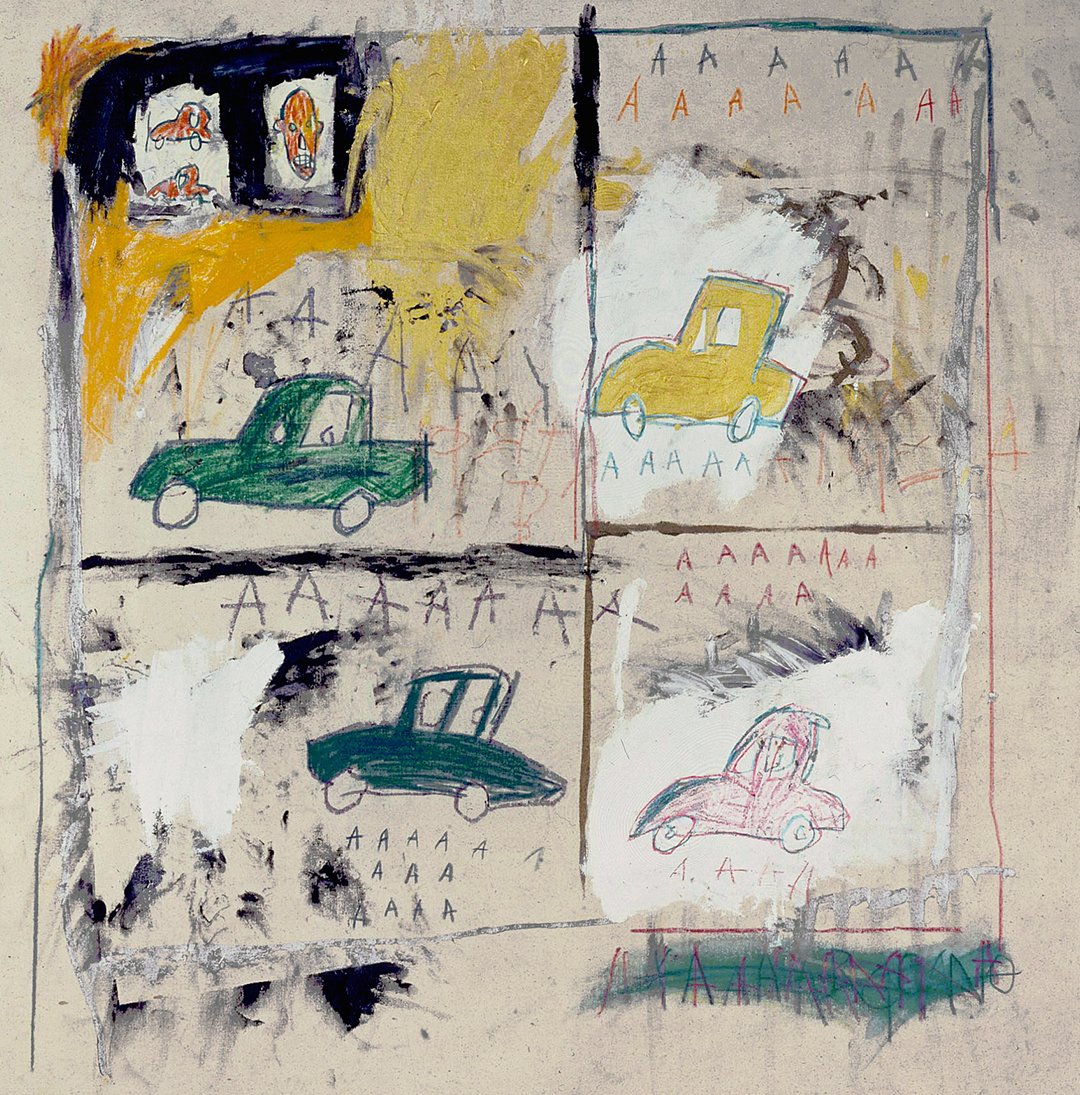 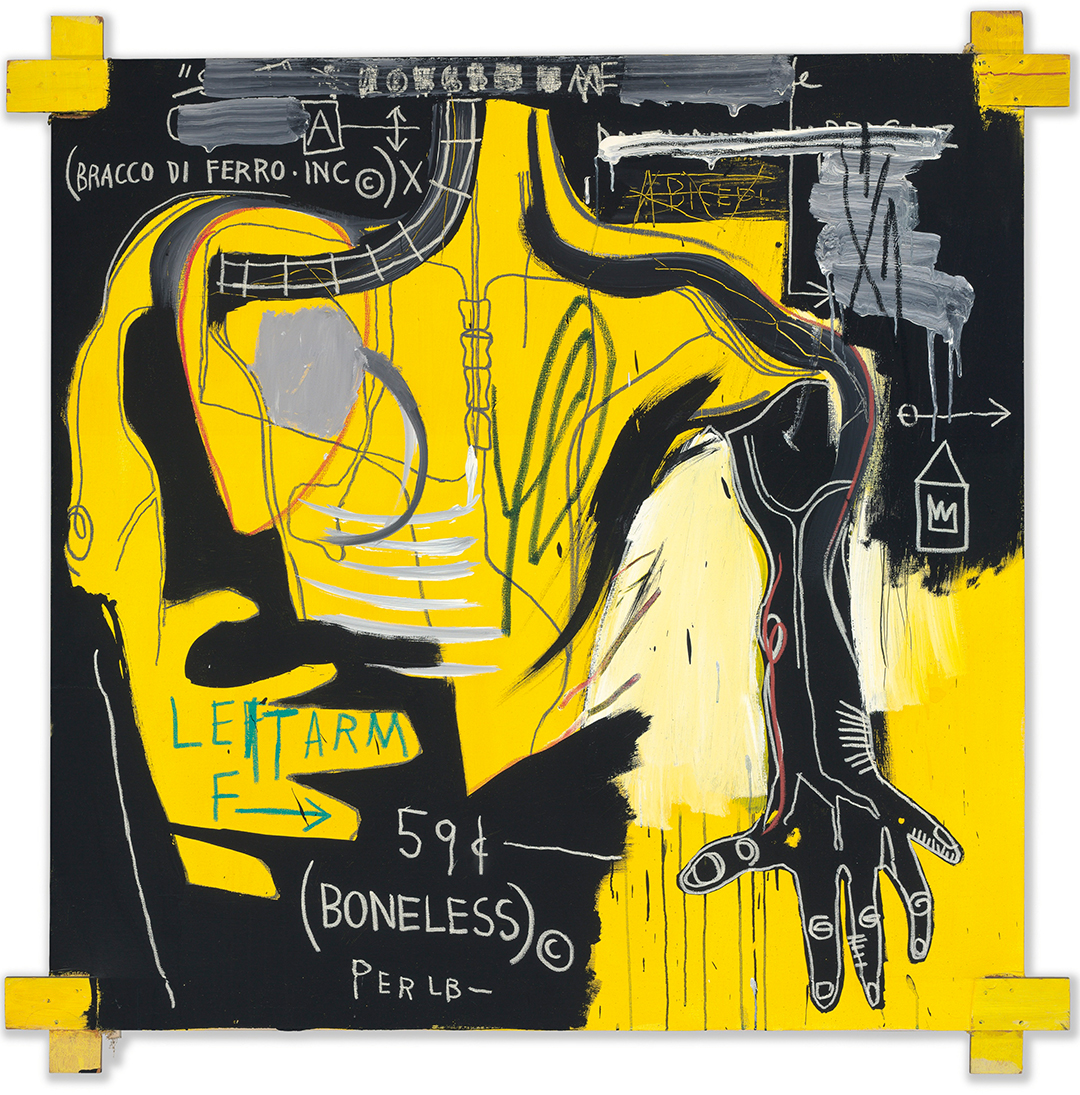 Basquiat began showing his artistic side in earnest  to the outside world as he became acquainted with Al Diaz at ‘City as School.’ Together they formed a graffiti crew called ‘SAMO©,’ leaving the notorious tag in everything they drew. Short for ‘the Same Old Shit,’ the name indicates something common and poor in quality. Basquiat, Al Diaz, and a few friends started spray-painting in the streets of Soho, New York. The walls were their canvas, and their doodle works became instantly famous.
Having always dreamed of building a name for himself, Basquiat wanted to earn fame and success on that opportunity. He used to idolize saxophonist Charlie Parker or guitarist Jimi Hendrix. Al Diaz, however, thought differently as he feared popularity will restrict their work and seeked anonymity. Eventually, SAMO© got disbanded, prompting Basquiat to write the famous sentence “SAMO is Dead” all over the streets of downtown New York.
After the breakup, Basquiat quit school. He began living in the streets despite the fact he had no financial need to do so, having come from a middle-class family.

Murals of Andy Warhol and Basquiat in a Brooklyn street © shutterstock

When Basquiat Met Warhol
As it is already well-known, any chronicle of the life of Basquiat cannot be done without mentioning Andy Warhol. The artist, who was deemed a marketing genius, recognized the pure talent and popular appeal of Basquiat early on. Warhol made hefty investments in the young artist. It led to the rapid rise in the value of Basquiat’s art. The graffiti painter became a star artist he had dreamed of.
In the meanwhile, Basquiat had a hard time dealing with various rumors surrounding him and Warhol. In 1985 a collaborative exhibition by the two failed miserably with harsh criticisms from the art circle, and ultimately damaged their friendship irrevocably.
Basquiat tried to stand on his own without Warhol’s help. He even held a large-scale exhibition in Côte d’Ivoire, Africa, after spending some time reflecting on his identity. During this period, he heard the news of Warhol’s passing. Basquiat became addicted to drugs and died of overdose in August, 1988, a year after the death of Andy Warhol. It was also six days before his planned move to Abidjan, the biggest city in Côte d’Ivoire. Ironically he was 27 years old, the same age as Jimi Hendrix when he passed away.
“I don't know how to describe my work, it's like asking Miles Davis, 'How does your horn sound?'”
- Jean-Michel Basquiat 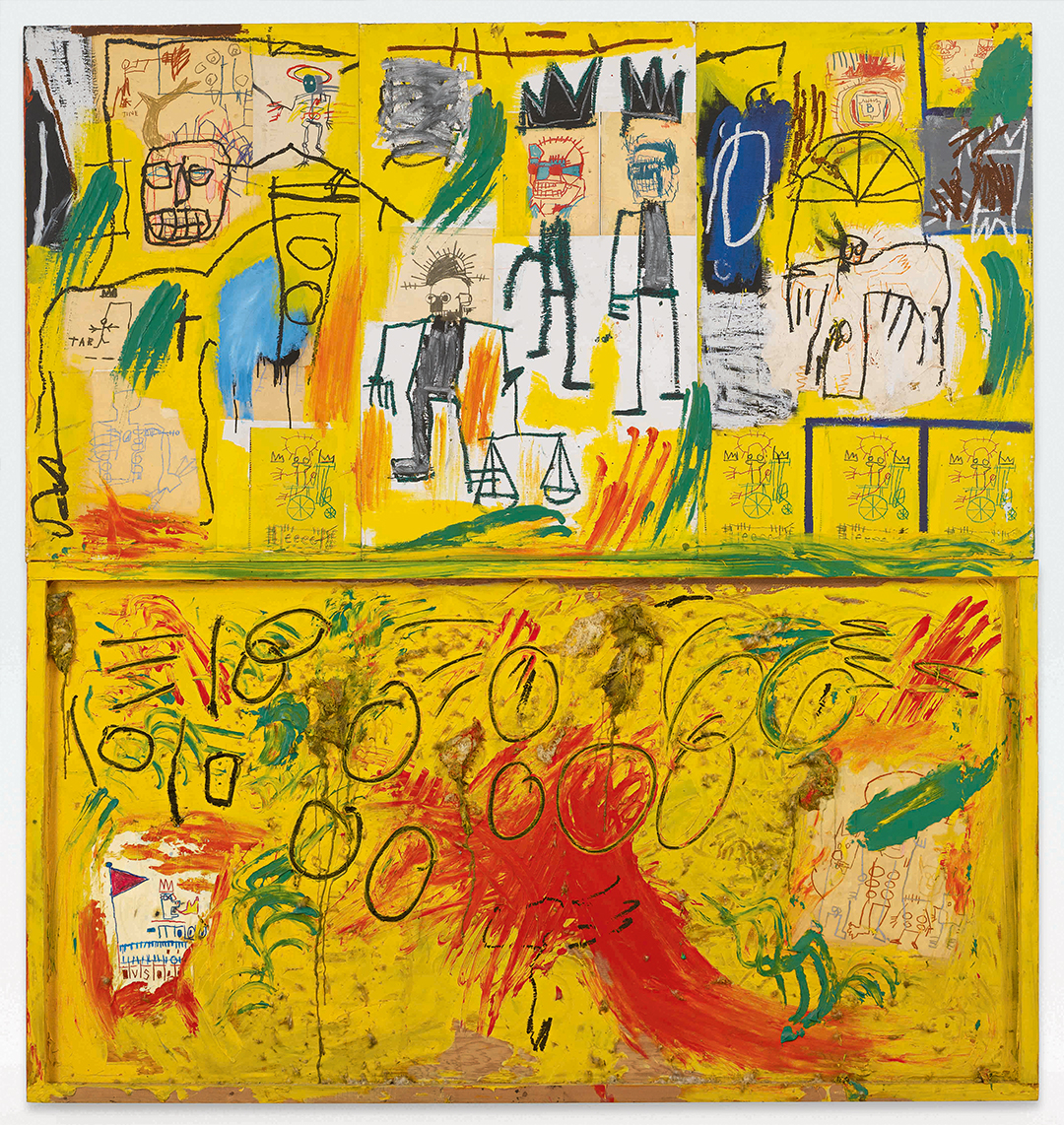 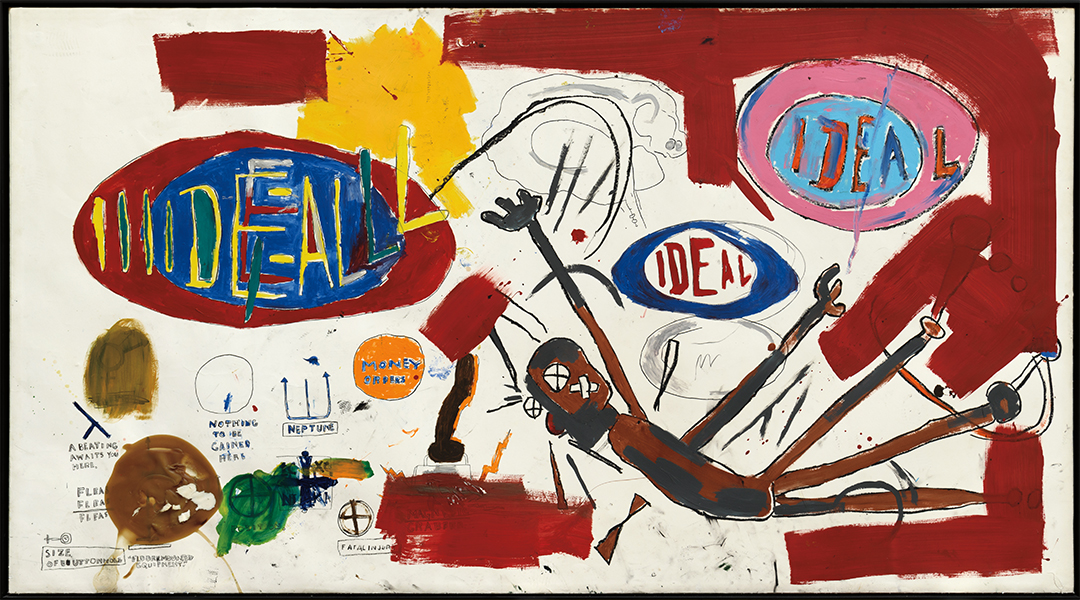 Painting Full of Skulls and Crowns
Although he debuted on the New York art scene in the early 1980s, he was only active for about eight years. During the relatively short span of time, Basquiat managed to complete some 3,000 pieces of work. There are several common aspects to his paintings, such as skulls, human anatomy, crowns, and written messages consisting of words. There is a reason for it .
In the year he turned eight, Basquiat was injured badly after getting hit by a car. While being hospitalized, his mother gifted him a book titled 'Gray's Anatomy,' which was filled with pictures of human organs and bones. Fascinated by the book, Basquiat started drawing skulls, bone structures, and various symbols in his paintings. In addition he created a character of color who wears a crown symbolizing respect and prestige after successfully pioneering his way in America despite its society-wide racial and class distinction. Now we can see with our own eyes Basquiat’s unique paintings featuring such skulls and crowns. 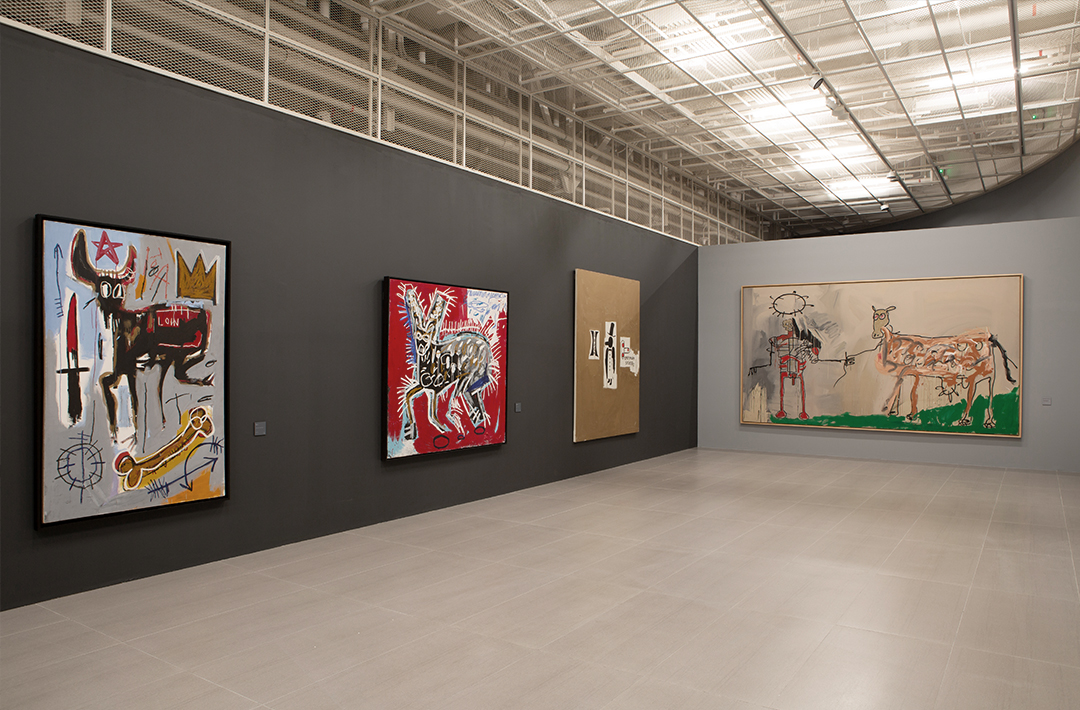 View of the Basquiat exhibition © LOTTE Museum of Art 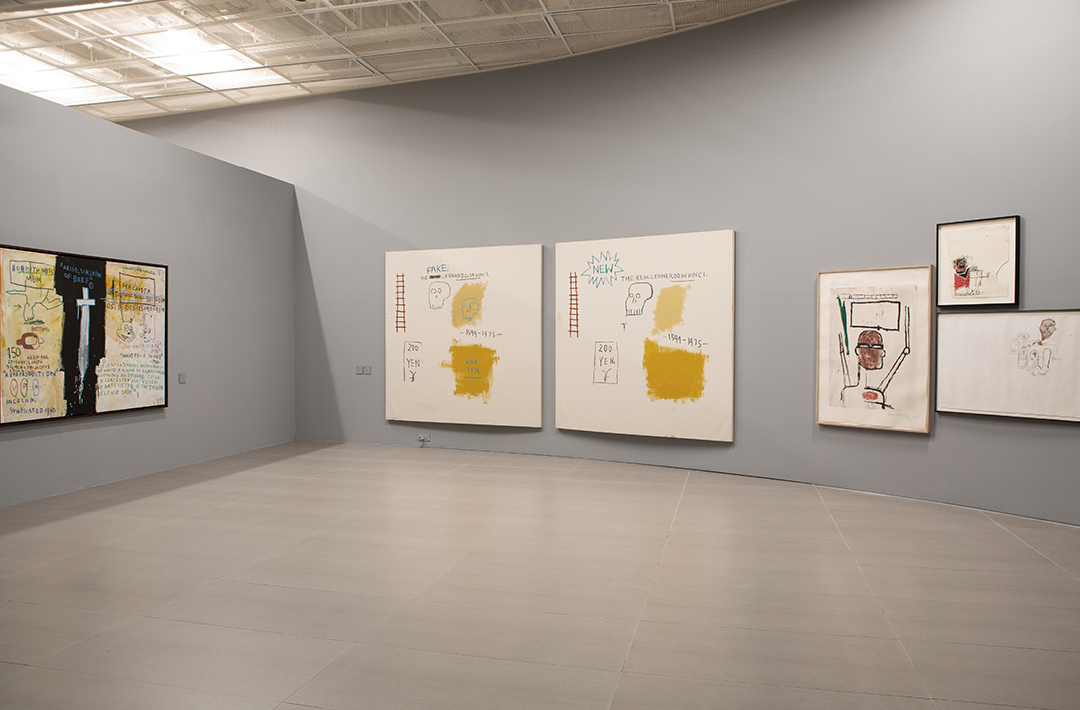 View of the Basquiat exhibition © LOTTE Museum of Art

150 Works on Display in Seoul
Starting October 8, the LOTTE Museum of Art is holding exhibition. It is the largest-scale event on Basquiat presented in Korea so far, featuring some 150 masterpieces until February 7, 2021.

The exhibition took on three keywords ‘the streets,’ ‘heroism, and ‘royalty’ which represent his personal life as well as his art world. The display includes a comprehensive selection of Basquiat paintings, sculptures, drawings, and ceramic pieces conveying varying perspectives, from elements of pop culture that began in the SAMO era in the streets of New York to ways of industrialization shown in the artist’s creative world and diverse icons using the artist’s hero motif. In addition, a set of large-scale artworks jointly created with his life partner Andy Warhol will be showcased.

It is an invaluable opportunity to meet artist Jean-Michel Basquiat who led a short-but-passionate life through his major works and to explore how his art world changed over the years.

Basquiat’s paintings are constantly being re-evaluated and re-interpreted in various areas including art, music, and fashion. Despite his untimely death at age 27, Basquiat still remains a legend and hero of the streets to many of us.

<JEAN-MICHEL BASQUIAT-ROYALTY, HEROISM, AND THE STREETS>