Travel to Lapland via Postcards
Having traveled to Lapland, Finland, where everything is covered in snow, photographer Melmel Chung wrote an email that starts with a sentence “Snow can be any color.” As a result, a postcard book titled < Lappi > was born. Lappi in Finnish means Lapland.
When a banana-flavored milk product was released with a copy that said ‘Bananas are white by nature,’ it caused quite a stir in the market. It was as if people found out for the first time that there’s a white banana flesh once the yellow peel comes off. Looking at Melmel Chung’s < Lappi >, I thought of that white banana-flavored milk. The snow in < Lappi > is sometimes white, sometimes ivory, and it keeps changing colors from orange to skyblue to blue, and so forth. There’s also a moment when it’s multi-colored. I realized for the first time that snow can glow in any color, and has different tones of shadow as I flipped through Chung’s postcard book. 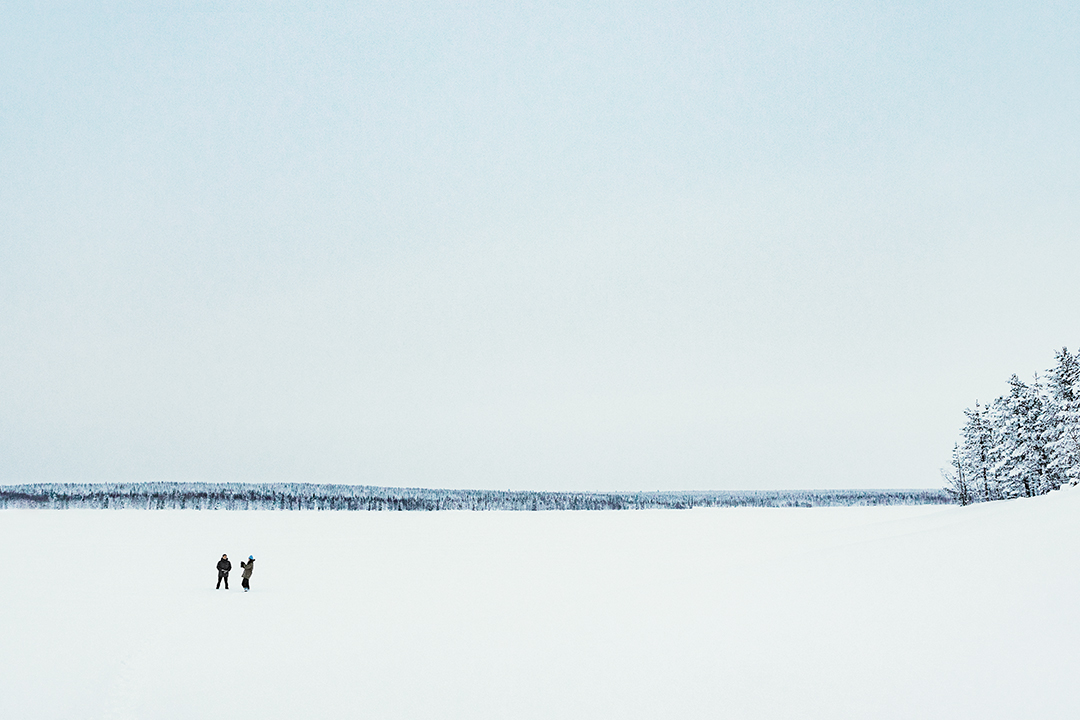 Melmel Chung who reacts keenly to light and shadow works as a photographer mainly in Seoul. She is a member of Studio Texture On texture, a small team of professionals working on photography, exhibitions, and projects for businesses, organizations, brands, and magazines. Her instagram photos often get questions regarding the camera she uses. But we know it is her unique perspective behind the camera lens that renders her work special. Whether it’s a commercial image for a brand or an interview picture for a magazine, her works are like a little girl or a granny. They are innocent, pure, loving, and warm. 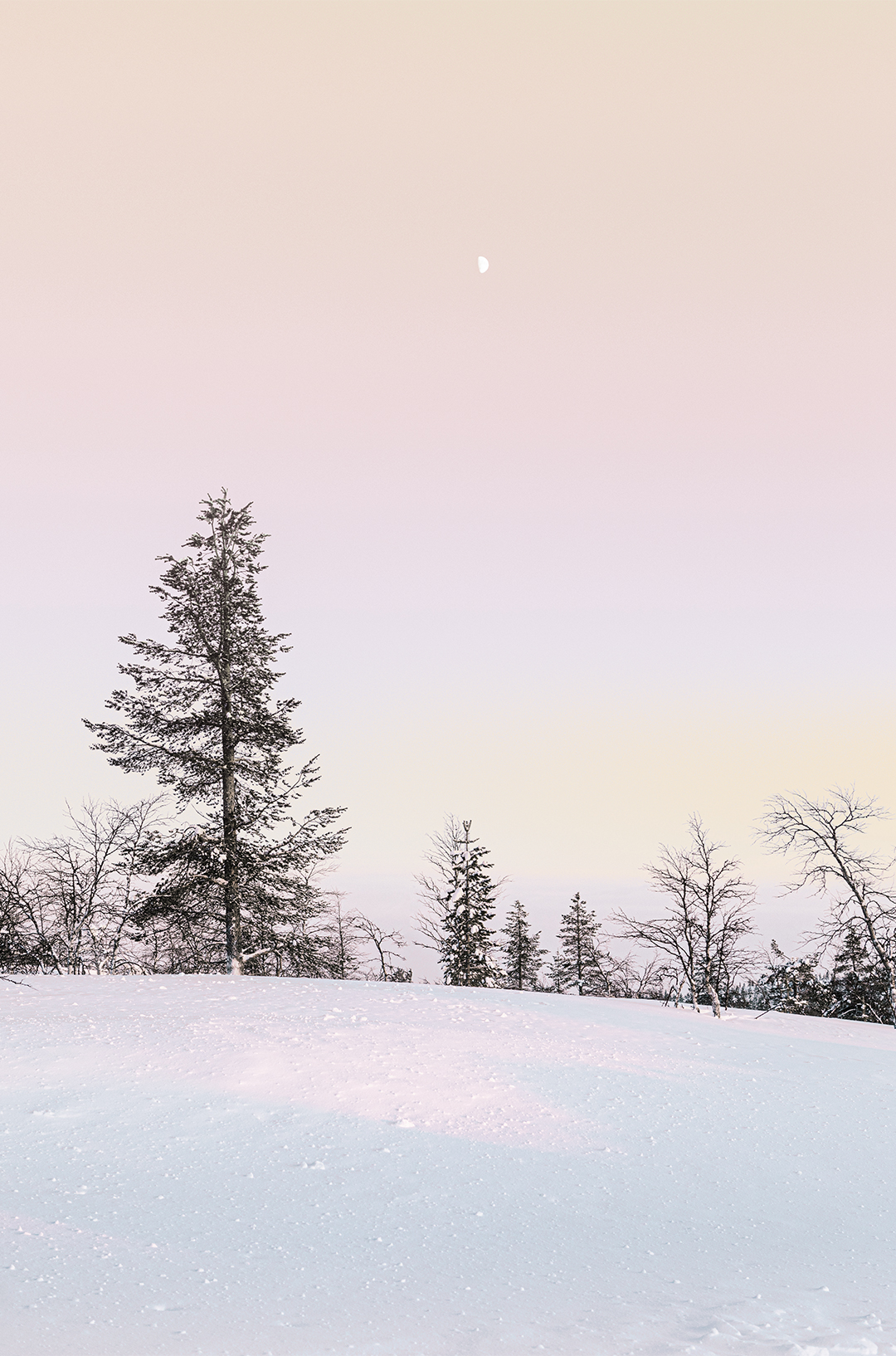 < Lappi > is a rather thick postcard book showcasing the photographs Chung took on her trip to Lapland, Finland, this February. The photos all feature snow, since Lapland in winter is literally the Kingdom of Snow. Lapland is located in the northernmost region of Finland. Sometimes it broadly refers to the northernmost region of Europe, including Sweden and Russia’s Kola Peninsula that border Finland.
The region is known for the Santa Claus Village as well as ski resorts. Most of the Lapland region belongs to the Arctic Circle. When the weather is nice, you can see aurora borealis. It is also a great place to experience the wild nature as the land is not developed due to the freezing temperature. The winter of Lapland is long(Snow remains through April), and the height of snow covering the land reaches between 50cm to 1m. Natural light paints this white wilderness that extends seemingly indefinitely.  Chung recaptures the light reflected on the snow with her camera, adding her warm and unbiased perspective to the image. 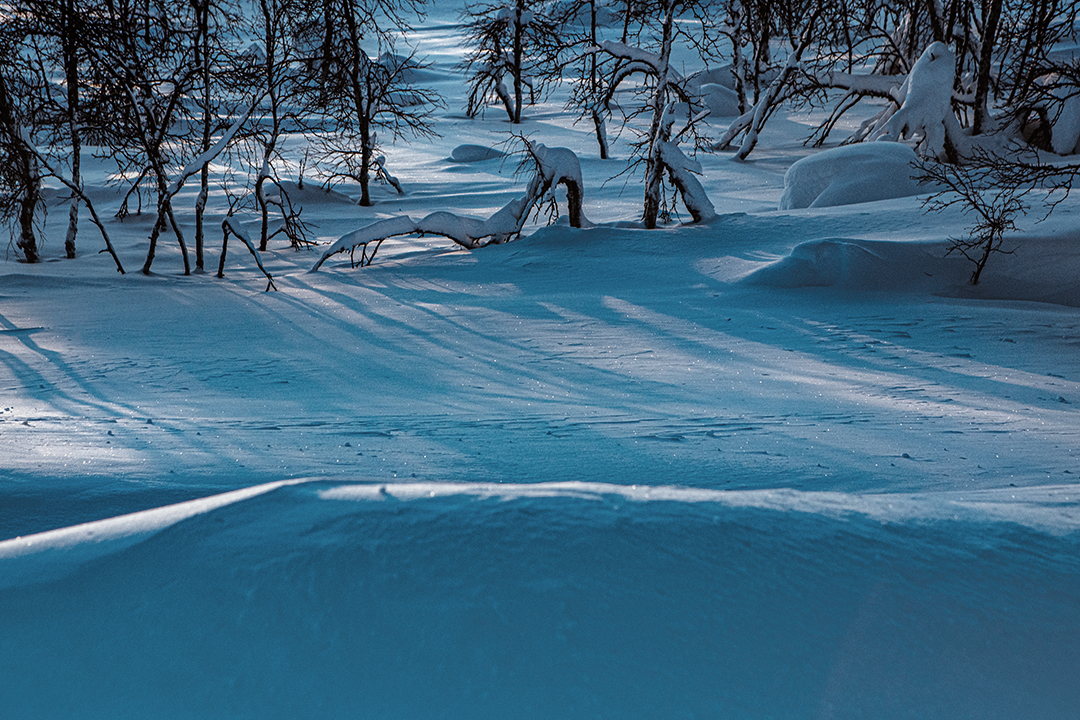 Tender is the night © melmel chung

Q. Tell us how your trip began.
A. I went on a business trip to Ulm, Germany and I decided to spend more time in Europe since I hadn’t been there for a long time. So I went to Finland to meet some friends of mine. For some reason, it did not snow much in Korea or in Finland in the winter of 2019. We headed north to see the snow, and that’s how the trip to Lapland began. It was a long journey via airplane and car to get there.

Q. What was your first impression of Lapland?
A. I stayed at a cottage where Finnish people go during their vacation, so it didn’t feel like a city but more like I was in this vast, forlorn world. Except in tourist destinations like ski resorts in Saariselkä, when you walk around in small towns, you rarely run into local people so you kind of wonder whether there are actually people living there. It’s too cold and snowy, and it gets dark at 4pm. It’s almost inconvenient to live in such an environment but I also was impressed with how local people have adapted to that. 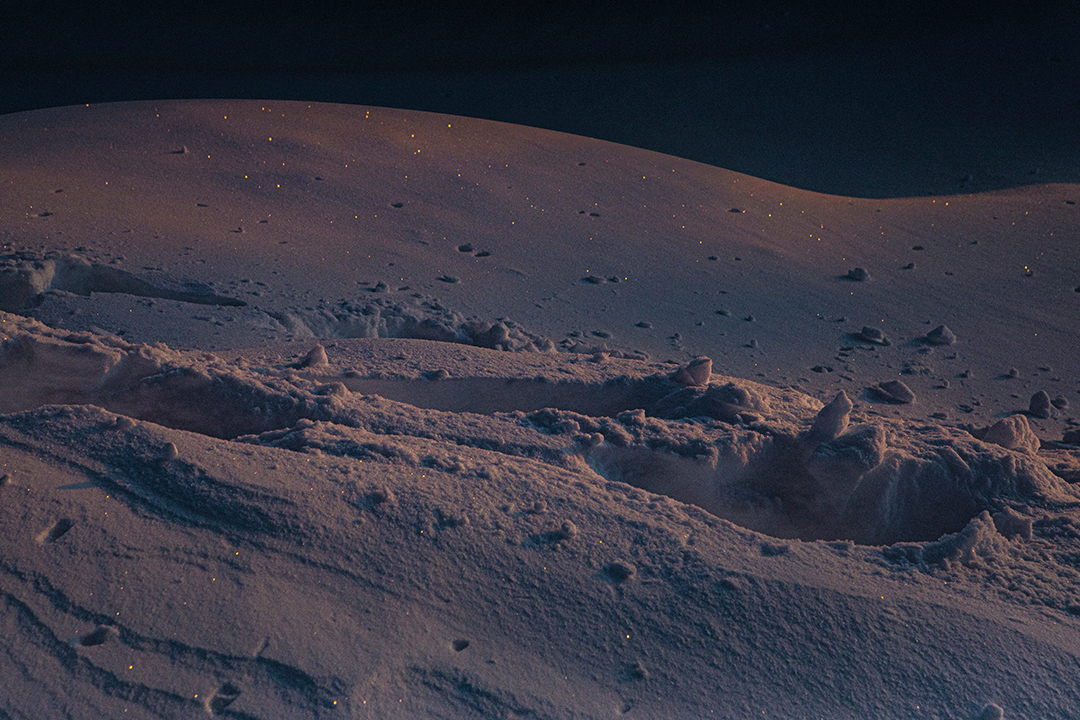 Q. What was most impressive in Lapland? Snow, perhaps?
A. Yes, it was the snow. The pure volume was impressive, but what amazed me the most was that in Lapland the color of the snow seemed to change hourly. Some snow was blue, other snow was glowing orange because of the twilight. Sometimes it was indescribable. So when I came back to Korea, I asked designer Kim Ji-yeon to work on a postcard book via email that said “Snow can be any color.”

Q. Among many places you’ve traveled to, is there a reason you picked Lapland photos to turn into a book?
A. The biggest reason is that the pandemic stopped all travel, and Lapland was where I went right before the pandemic. I have the most vivid memories of that place. Had I gone to Hawaii or Tel Aviv, I would have used those photographs to do something. The reason I chose to publish them was because I wanted to work with a designer that I was close to and could rely on. I didn’t make the decision because it was Lapland. Rather, I was worried the book may be boring because of all the snow. 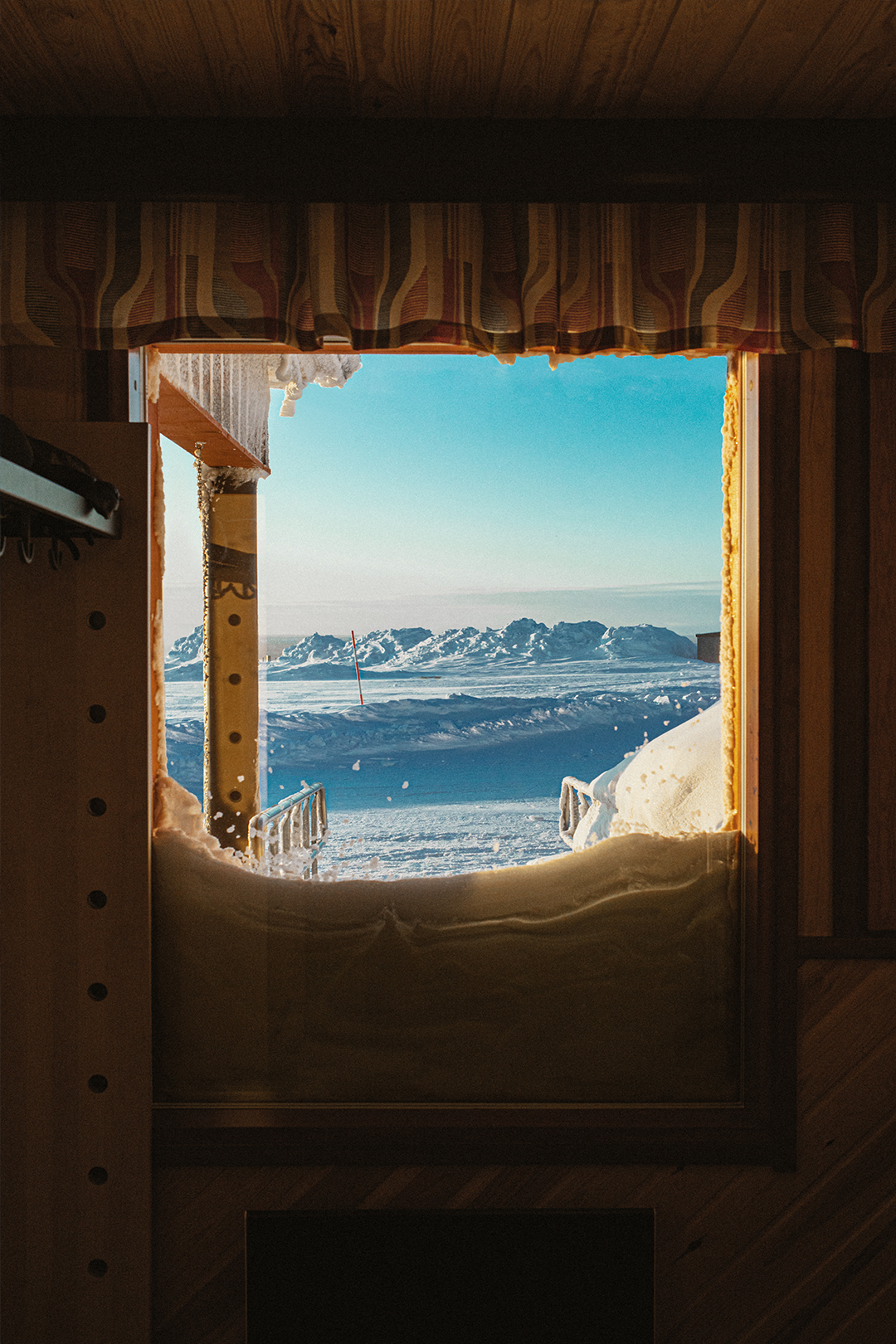 Patterns of frost on the window © melmel chung

Q. Why a postcard book, not a photo essay?
A. I made up my mind after finding a set of aged, old-fashioned postcards covered in dust at a corner of a souvenir shop in Saariselkä, but I had always wanted to make a postcard collection. Whether online or offline, I want my photographs to go a long way. I absolutely love photo essays, but they are difficult to share with other people. I want < Lappi > to be actively used and shared by people. You can put it on the refrigerator door or on the desk, or you can use it to write to someone.

Q. What did you consider most in releasing < Lappi >?
A. Surprisingly it was the price. I didn’t skimp on the quality of paper or finishing touches because I didn’t want to make something I may regret later. Being a book of more than 50 postcards, the price inevitably went up. So I had to make some compromises so that it won’t be too expensive. I don’t know if my effort will pay off. 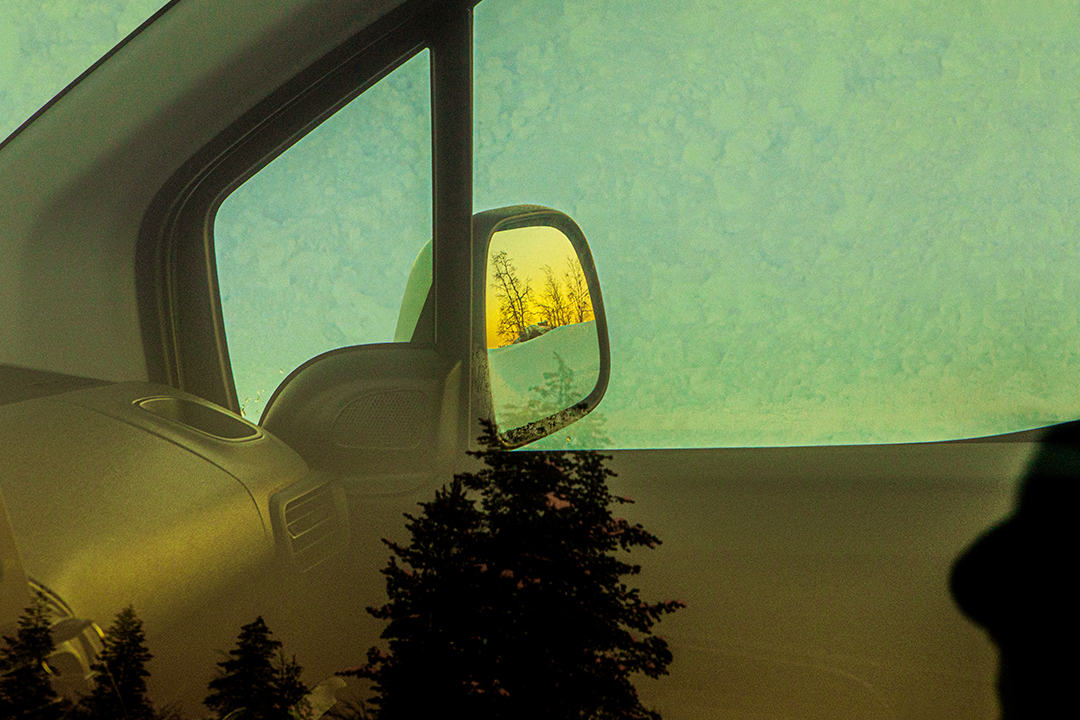 Q. As you explained in the introductory message, < Lappi > offers ‘52 photographs with a title for each.’ Before arriving in Lapland, did you expect to take so many snow photos?
A. I expected a lot of snow since I had researched it while preparing for a trip to Lapland. But seeing the landscape on an image and in person were very different experiences. It was to the point that I was let down realizing you can’t really convey such feelings through images.

Q. There must be a reason why you gave a title for each photograph.
A. I didn’t want my photos to become nameless images included in the postcard book. The scenes are somewhat similar, but I wanted them to have original titles. The problem was that it was more difficult than I thought to give names. That took a while and delayed the process.

Q. What was the most memorable moment in Lapland?
A. I wanted to see a wild reindeer, and actually saw one a few hours before going back to Helsinki. In the book the photo’s titled ‘Reindeer.’ 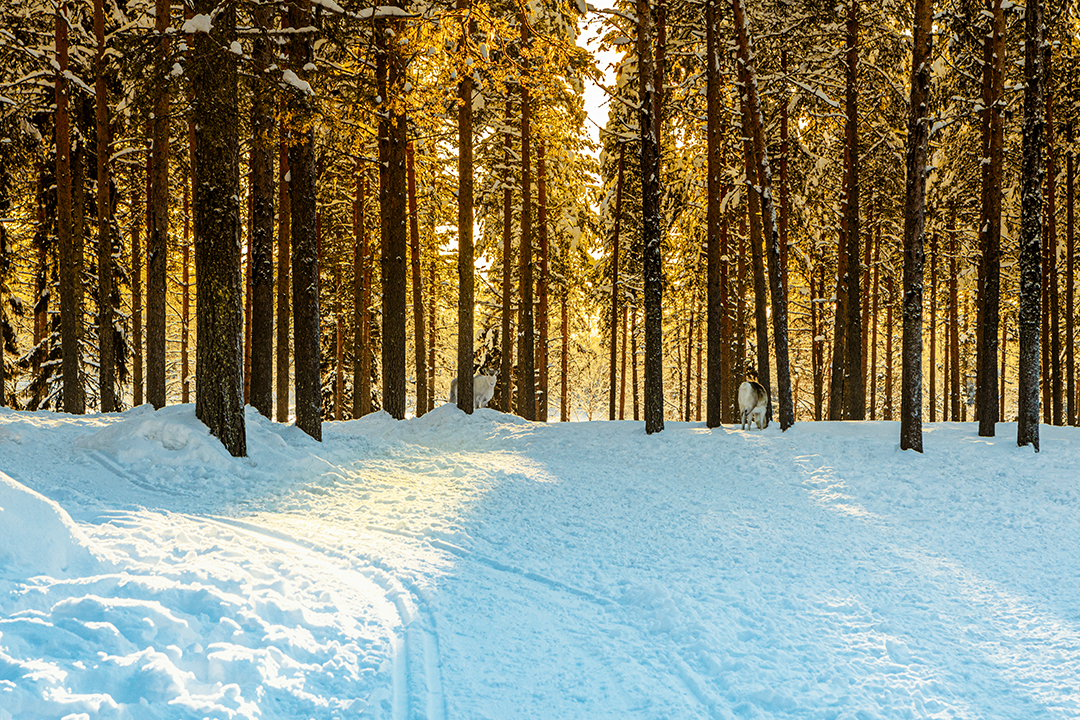 Q. Do you tend to take a lot of photos when you travel?
A. I think so. I’m almost always capturing something. It makes me happy. It’s as natural as breathing to me. It could bother certain people, so I usually travel with those who do not find my habit annoying.

Q. What does travel mean to you?
A. It’s meaningful in a sense that you are away from your routine. I think others would feel the same way.

Q. Is there something you want to see if you can visit Lapland again?
A. I’m curious about Lapland’s summer. To be more precise, I’m curious about a summer cottage in Finland. I want to see how it differs from the winter scenes. Besides I liked how Finnish people spend their vacations. When the weather is warm, they would swim in the lake or pick mushrooms and berries, I heard. 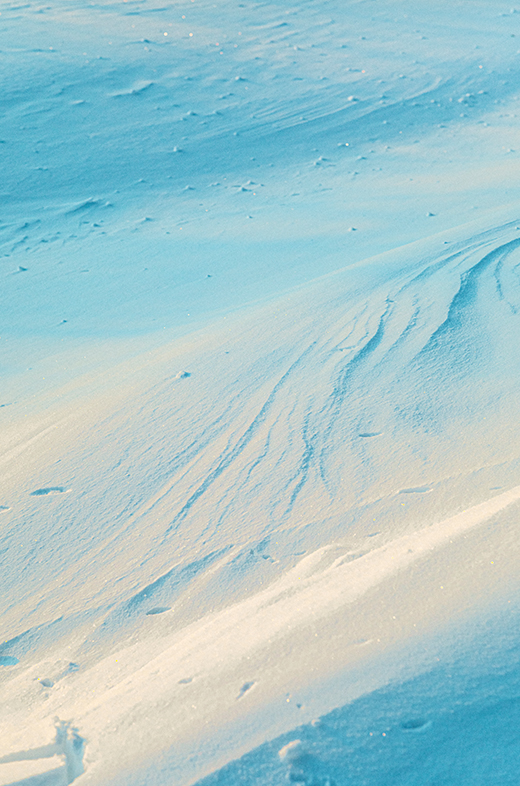 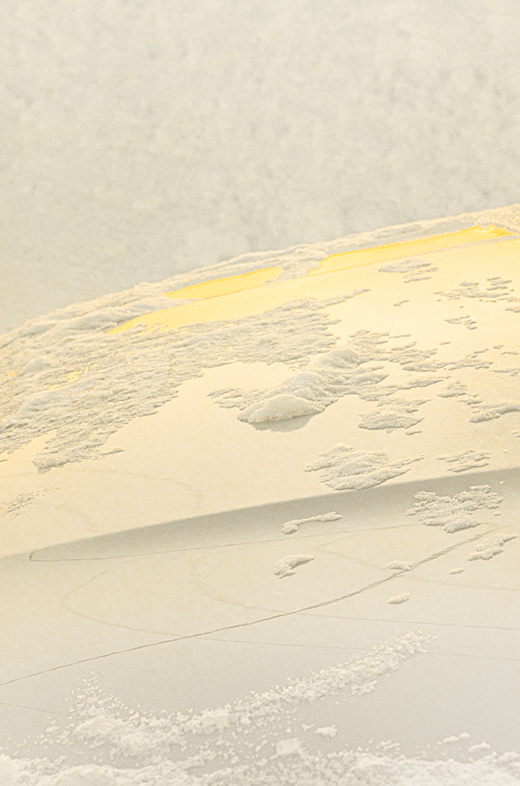