Photographer Who Draws Urban Patterns
Photographer Lee Kyung-jun has moved from Seoul to New York, but he continues to climb skyscrapers to portray the people and the city he sees from high above.
The New York metropolitan area is nothing if not diverse. People come from all over the world to knock on New York’s doors in search of dreams and a better future. You’ll meet people from all sorts of nationalities, ethnicities, political leanings and social status. Diversity is the name of the game in New York, a city that was built by immigrants. New York became what it is today because it embraced outsiders.
Sting’s early hit single ‘Englishman in New York’ depicts an Englishman trying to keep his head up in New York. But he also calls himself “a legal alien,” which, in some ironic ways, everybody is in New York. 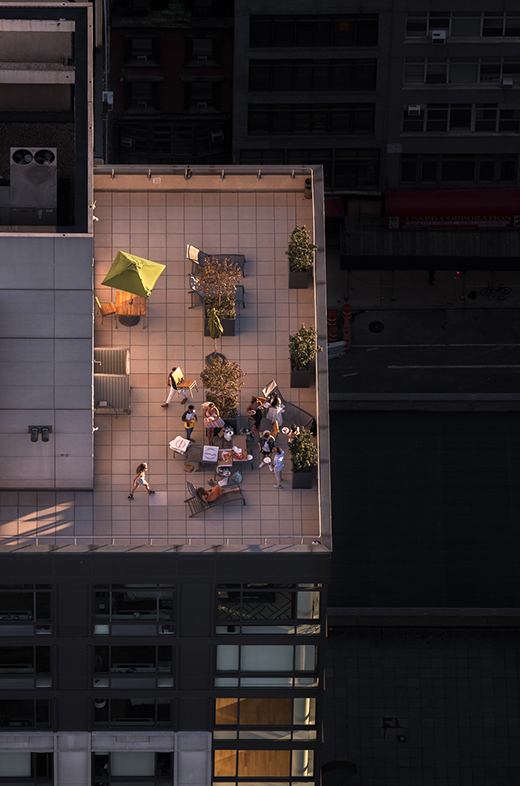 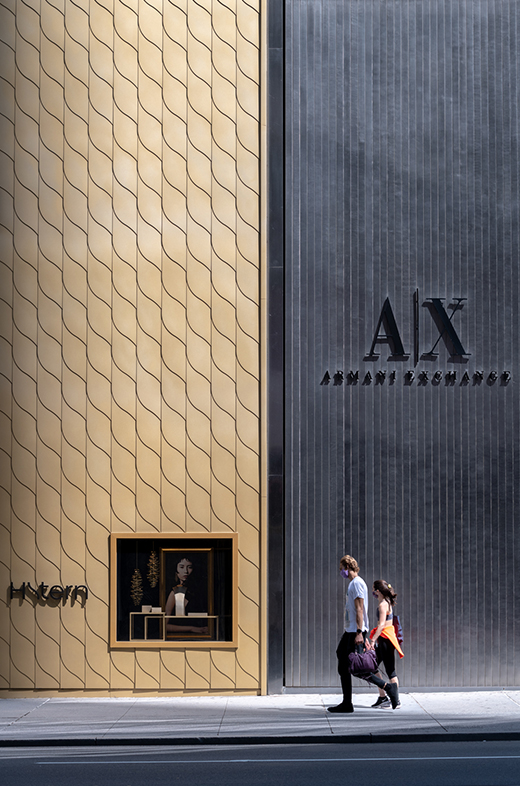 Patterns that Lee Kyung-jun Creates in New York
Photographer Lee Kyung-jun left Seoul for New York two years ago to become an alien there himself. He is not a full-time photographer. He makes a living as a physiotherapist. But the title photographer suits him just fine, for Lee has been consistently prolific.
Lee is an urban observer who likes to study cities and capture just the right moments. He also creates patterns, turning lives of urbanites into a new pattern. The intersection of these two is where you will find his works most sparkling. And you will find quite a few of them on Lee’s social media pages. His brilliance hasn’t been lost on his trip from Seoul to New York.
During the global COVID-19 pandemic, Lee has been taking pictures of people living in New York, with the United States said to have been hit the hardest by the virus. The series has been named ‘State of Emergency.’ 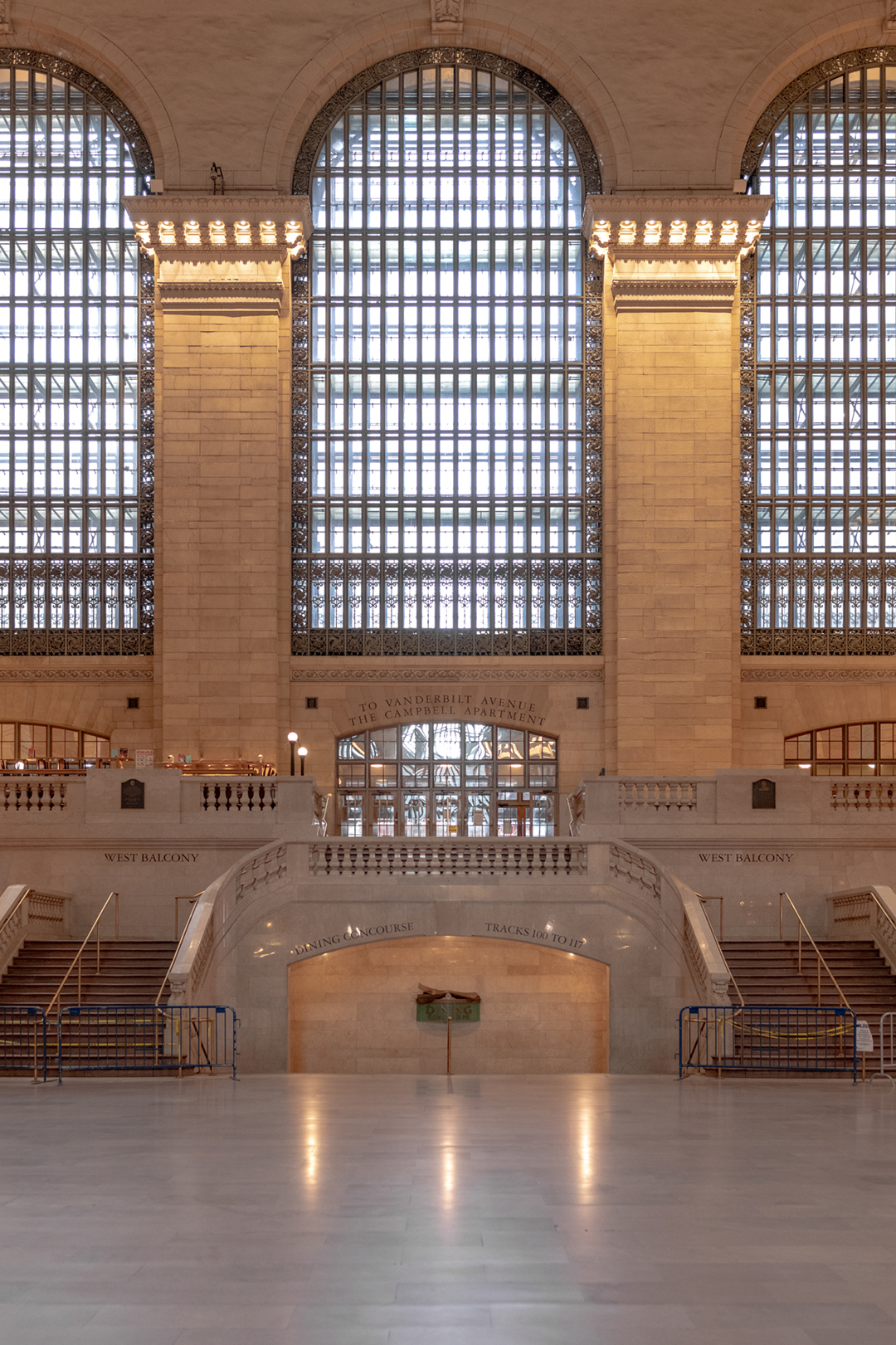 Q. Why did you decide to start the ‘State of Emergency’ series?
A. On March 13, 2020, New York’s mayor declared a ‘State of Emergency.’ And I wanted to portray the way New York would change in that situation. I took pictures of empty streets and deserted Grand Central and Times Square, plus landmarks and parks in Manhattan. I also captured queues with people standing 2 meters apart at markets and drug stores.
Q. You often take pictures from the same eye level as a skyscraper or look down on your objects from the top of those high rises. We’d like to know more about your working process.
A. I usually go up to an observatory within a city, or go to open rooftops, windows or top of bridges. I get on a helicopter, too. What I want to see is usually far away and I end up using a telephoto zoom lens. If that’s not enough, I crop pictures or adjust them accordingly. 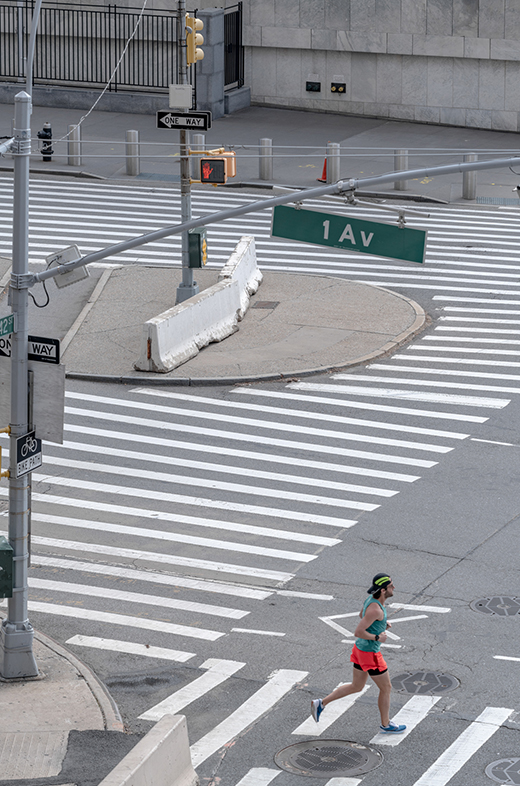 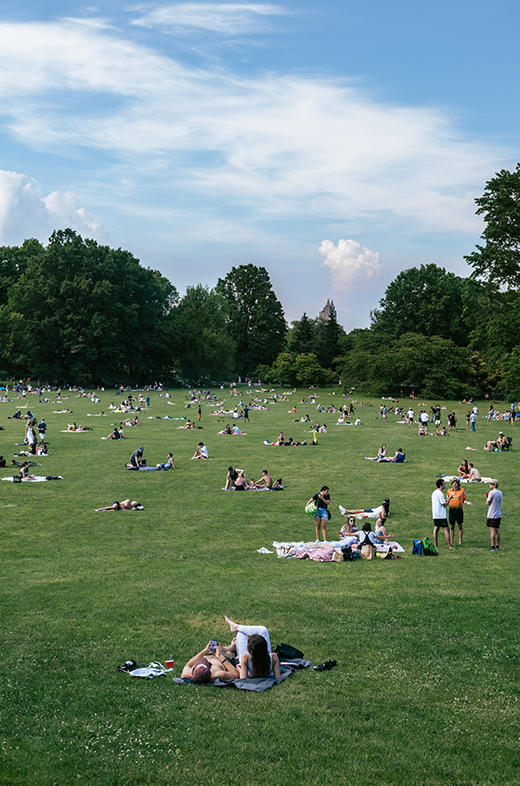 Q. How do you determine what you want to shoot?
A. It’s usually random. Sometimes, I walk on streets or visit certain places to plan my shoot. But I prefer capturing some random, accidental moments that I encounter.
Q. Your Instagram bio says ‘Urban Pattern.’ What does that mean?
A. It was after I completed my military service and returned to graduate school that ‘Urban Pattern’ began to take on a more concrete shape. I had a hard time getting used to the new lab, and then I got a freelance offer to take some photos. My life became a bit more dynamic after that, though at the same time, I’ve constantly had to deal with questions about my direction in life and my future. Then one day, I fell in love with the view of the city seen from above during a shoot. Lane, road signs, pedestrian walks, and people going somewhere as traffic lights changed all came to me like one pattern.
Q. What do cities mean to you as objects?
A. I’d like to get close to them and have it stay that way. I could understand cities better that way and I will find the meaning of living in this city. About this time last year, an architect friend of mine moved into my neighborhood, and we’ve been talking a lot about this city since then. I think those conversation have influenced my thoughts and the way I view cities. 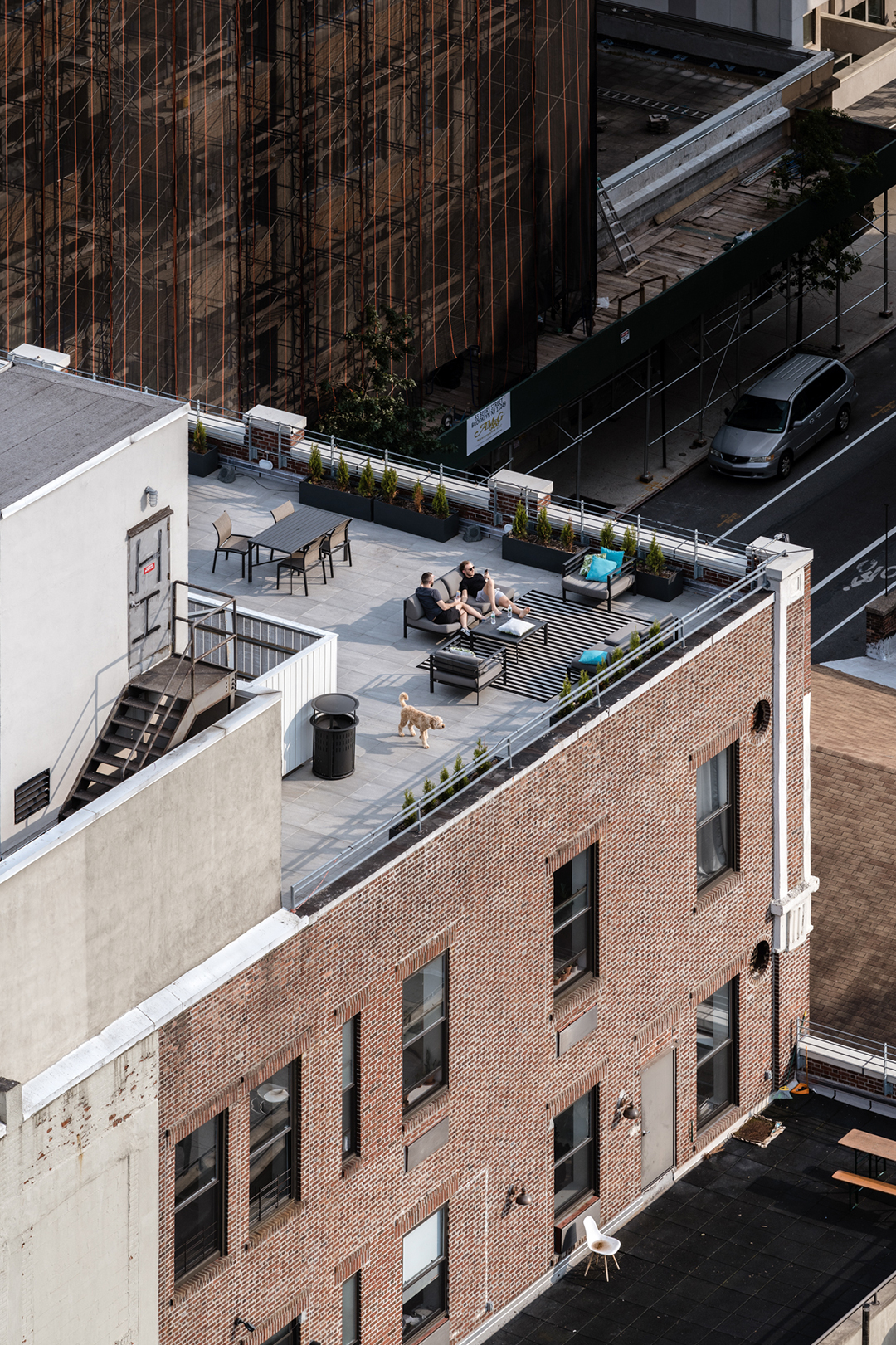 “Viewed from afar, the objects all become flat, and I thought urbanites would naturally become anonymous that way. From up top, I get to see a lot of people at once. Since they obviously don’t get conscious of me, I get to catch them unguarded. The physical distance between people also explains their relationships.” 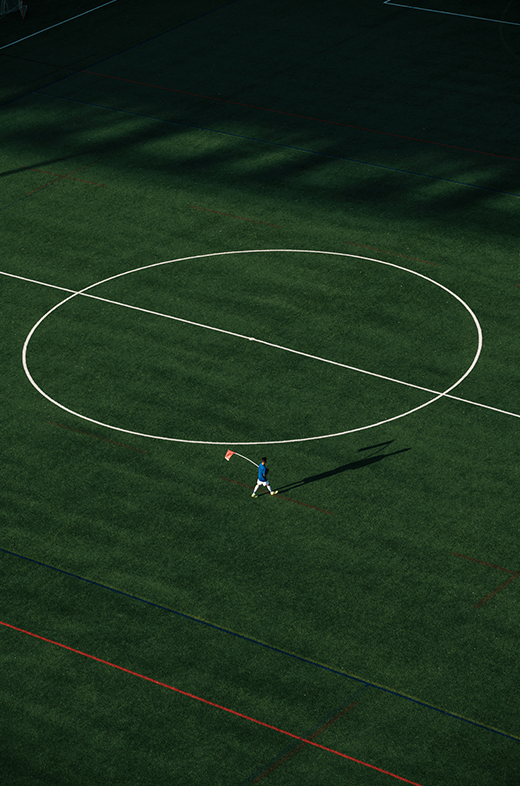 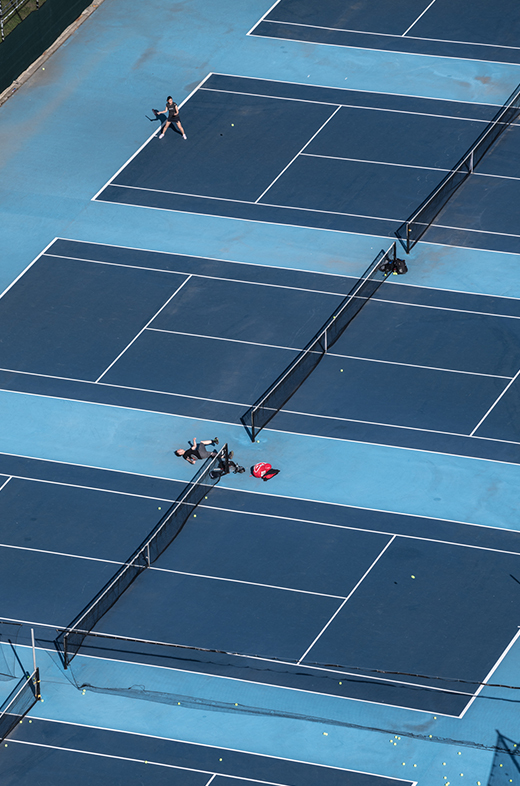 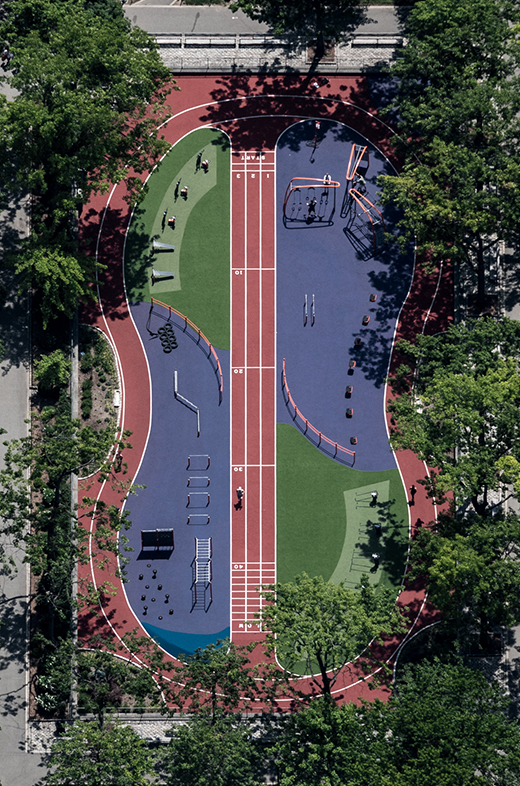 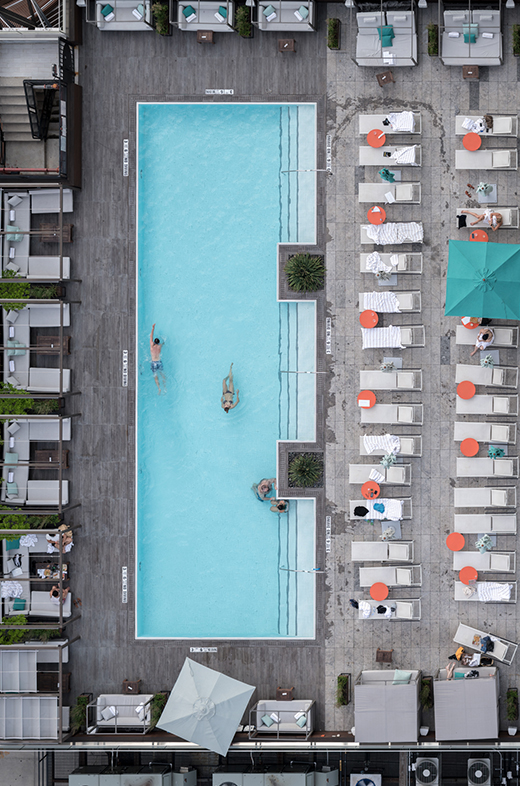 Q. Where do you draw inspiration from?
A. I gather ideas from everything that I experience. It could be some talk I had with a friend, a piece of work I discovered at a Chelsea gallery, an Instagram feed, cloud and light, or a walk in the park.
Q. What would you say is the biggest difference between New York and Seoul?
A. I moved to New York in January 2018. I can’t really say anything categorically because my view on the given city changes depending on my relationship with the place. But I think the biggest difference between the two cities is diversity, and social climate in which such diversity is naturally accepted.
Q. What about your working environments?
A. I do have more freedom working in New York. People don’t really pay attention to what others are doing, so I get to take my camera to different places and try new things. But as time has gone on, I’ve had moments where I thought I didn’t really belong anywhere. At first, I felt liberated not to have any affiliation. But now, I think there’s a larger sense of being lonely because I am an alien. I think these emotional elements have an effect on my photography. For one, I don’t pick up the camera as often. And two, when I do have my camera, I am a bit more careful and deliberate with pressing the shutter.
Q. What’s your favorite view, or favorite place of New York?
A. I sometimes feel overwhelmed just looking at the skyline of Manhattan or being surrounded by iconic buildings. My favorite activity is to go for a walk at Central Park or Washington Square Park. It makes me feel good just looking at people relax at the park or do something leisurely. I get some extra energy from that. 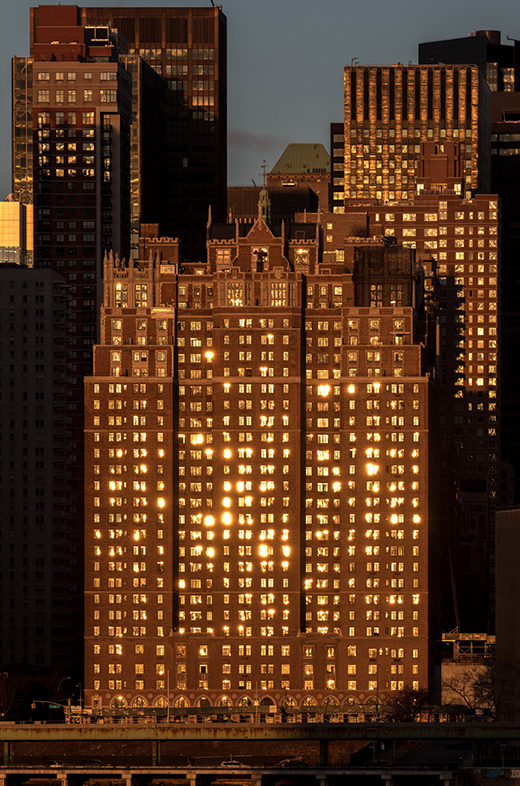 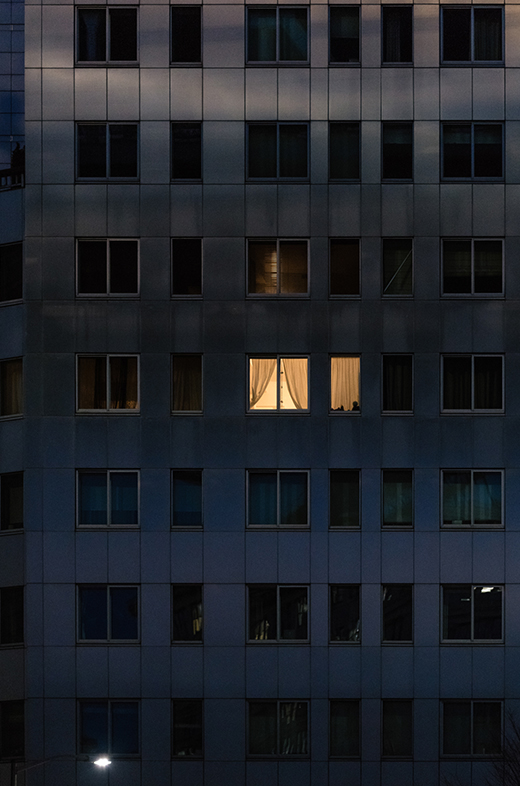 Q. You once said in an interview that you saw different lives through different windows of a building, and that you found it fascinating that individual lifestyles created different patterns. What did you mean by patterns there?
A. Windows may all look the same, but things that take place beyond those windows are all different and each space has its own identity. I felt such diversity created a new pattern on its own. Buildings and people always operate organically.
Q. COVID-19 has made life difficult for a lot of us. How are things in New York?
A. I think struggles of the past spring have changed people’s perceptions about masks. I think people for the most part put on masks and try to maintain safe distance from each other. Restaurants and cafés that only operated patios have begun accepting people indoors. Streets are coming back to life again.
Q. I thought the scenes created by COVID-19 were right up your alley as a photographer. How has the pandemic altered your working process or environment?
A. At its worst, I had to be careful because I knew a lot of people were making sacrifices to beat the virus. I would plan ahead and go for a shoot when I had to leave home to buy essential items. Once back home, I would feel so drained that I wouldn’t be able to go outside for a few days. Before COVID-19, I spent a lot of time waiting for the moment that caught my attention. Now, I am waiting for people on empty streets. 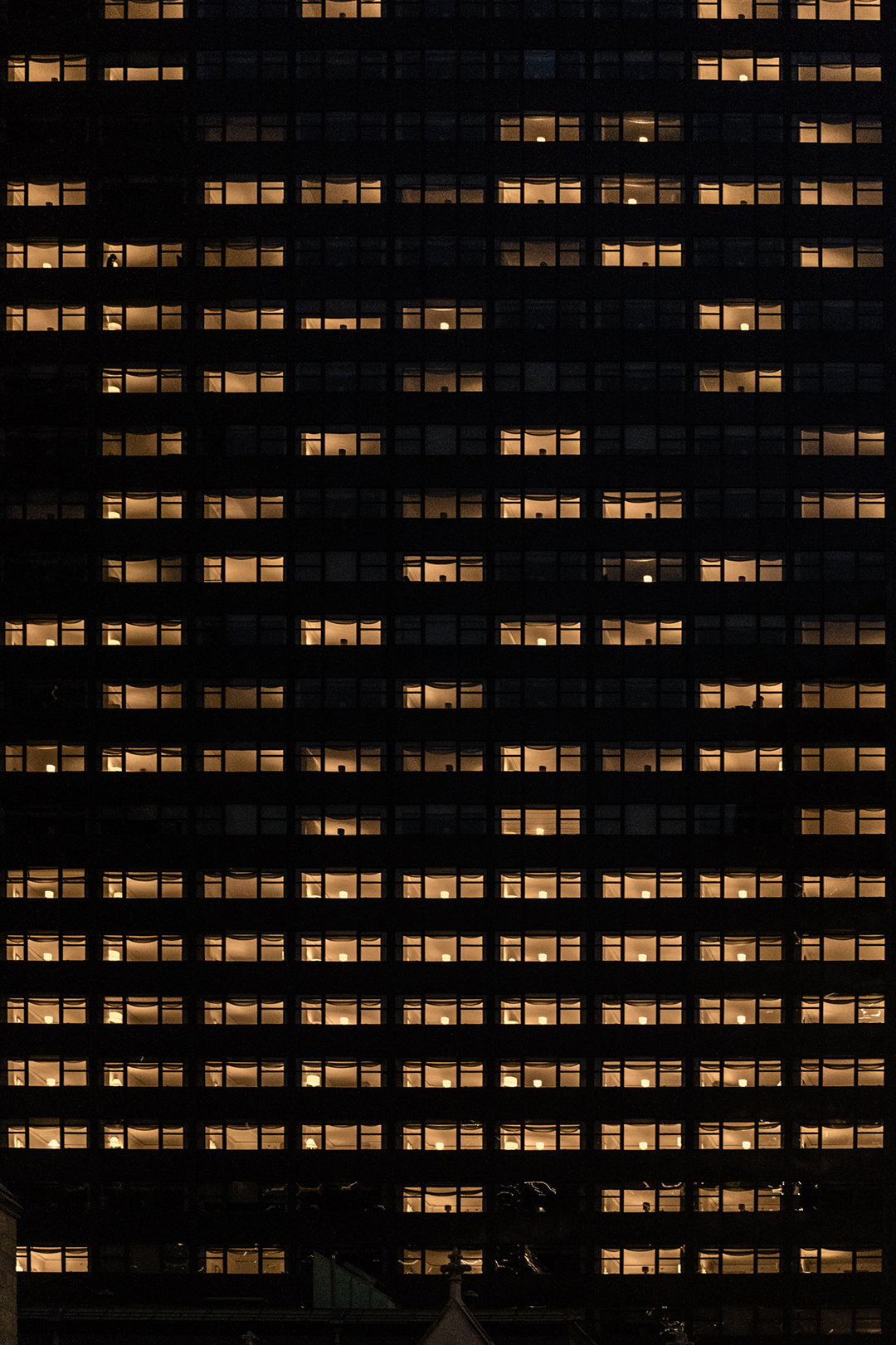 “Windows may all look the same, but things that take place beyond those windows are all different and each space has its own identity. I felt such diversity created a new pattern on its own. Buildings and people always operate organically.”
Q. What part of New York do you want to portray during the pandemic?
A. I want to show people how New York has changed. Early on, it was deserted streets or places. Now, I want to take a look at the organic relationship between people and the city as they grow accustomed to the pandemic. 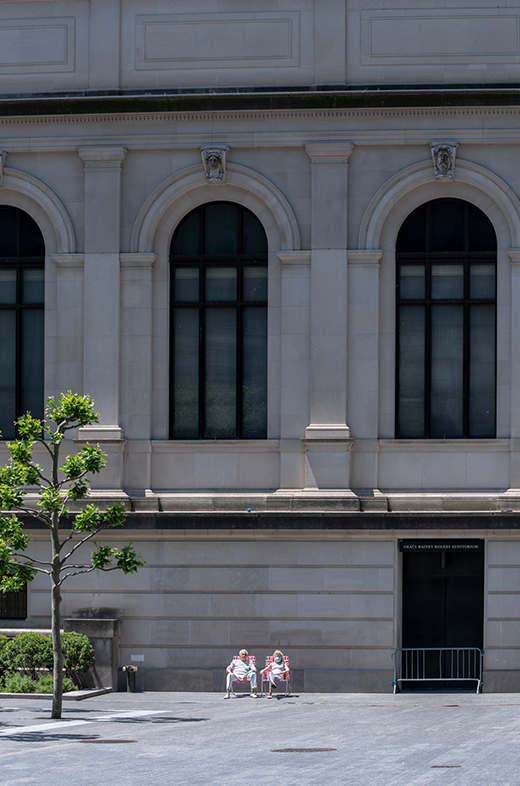 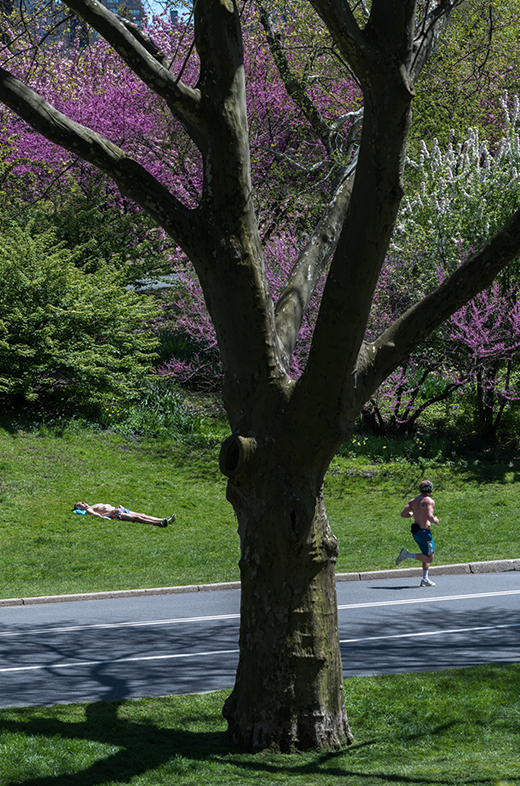 Q. What would you like to shoot next?
A. In New York, I’ve done some interview shots of a painter and taken pictures of artists’ works. When an opportunity comes and when the virus situation improves, I’d love to take photos of New York-based artists and their working spaces.
Q. Have you thought about turning to photography full-time?
A. I don’t have the camera in my hand as much as I used to, but that makes photography more enjoyable. Photography is a way of expressing what’s inside of me. The act of pressing the shutter helps release some of the emotions and it’s also consoling in a way. When I moved to New York, I decided I would keep photography as something that I would enjoy. It’s nice to have a breathing spot like that in life.
Q. It’d be great to see a book or an exhibition from you.
A. I haven’t had them. But if I get an opportunity to do that, I’d love to go for it.