86-Year-Old Rose Wylie Presents Youthful Paintings
An 86-year-old British artist held a large-scale exhibition in Seoul with her paintings that have captivated the world. Her choice of colors, subject matters, and themes all defy the conventional thoughts about age with their bright and child-like style. That alone makes it worthwhile to remember the artist’s name, Rose Wylie.
What information do you need to talk about an artist? Awards or estimated values of the artist’s works? Themes or philosophy? The color of the artist’s skin, age, or gender?
Unlike athletes whose physical talent and strength are absolutely important, artists may not need to consider their age too much in their career. In fact, for artists, age may not be a hindrance but another name for experience and knowledge as their philosophical approach to and understanding of art would have matured with time. However, there is one particular individual whose age seems to matter, or at least draws much attention, every time her art is discussed. It is artist Rose Wylie, aged 86, who is actively building her career at present. 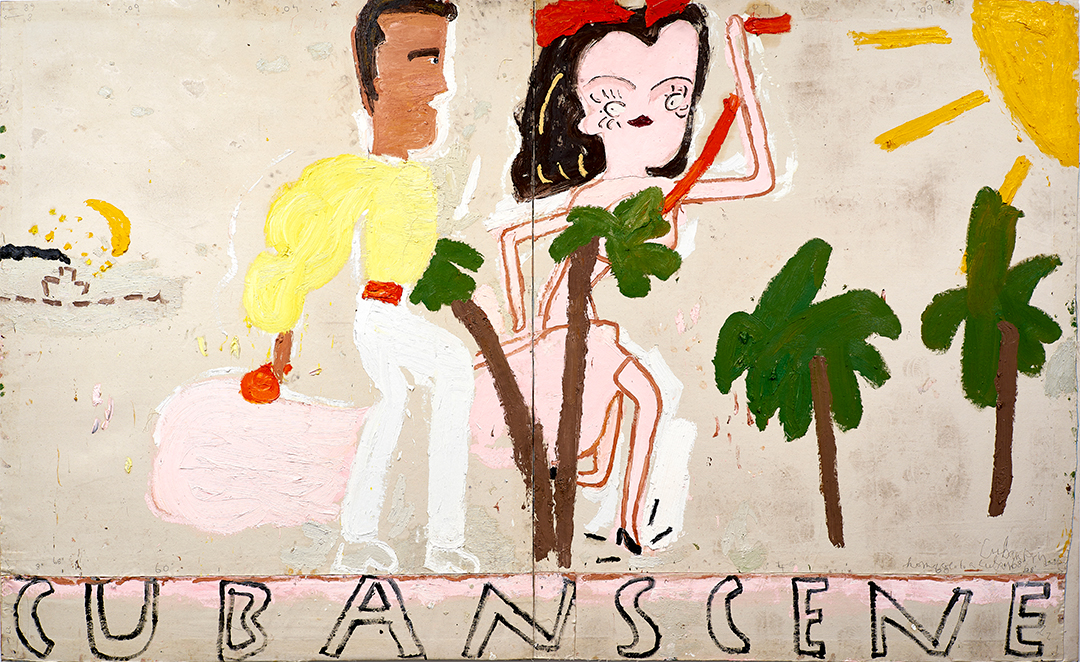 Youthful, Brilliant Time Depicted in Wylie’s Art
Wylie is under the spotlight from numerous media and art galleries partially because she works so vigorously to create art at an age when it is deemed even challenging to maintain one’s health, and also because her paintings and subject matters increasingly seem to move backward in time. Her art world takes the audience to a world that defies time and gravity.
Let’s take a look at what she deals with.
Wylie draws inspiration from a wide spectrum of topics including famous Quentin Tarantino films such as and , Hollywood celebrities like Marilyn Monroe and Nicole Kidman, football stars such as Wayne Rooney and Thierry Henry, and more serious issues of environmental destruction and a small British village air-raided by the German air force during World War II. 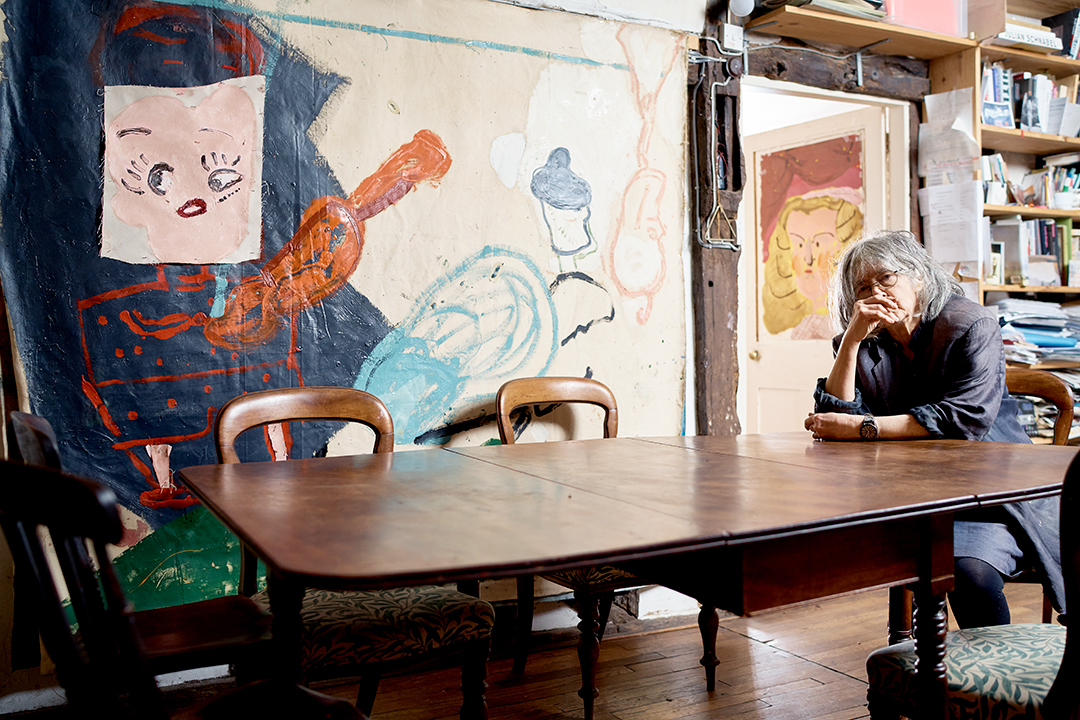 Wylie was born in Kent, England. She majored in art but had to give up painting to raise a family after getting married. It appears marriage and subsequent childbirth and parenting affect women’s career all the same in East and West. Later she attended the Royal College of Art at age 45. She did not earn fame as an artist for years. Nevertheless she kept on drawing and painting everyday. Her passion for art was very much ablaze when finally she was noticed by some art experts.
In 2013, at age 79, she had her works exhibited in Tate Britain and Serpentine Gallery. She won the John Moores Painting Prize in the following year. Established by entrepreneur and philanthropist Sir John Moores to motivate painting artists, the contemporary art award is deemed the most honorable recognition among British painters.
has dubbed Wylie as one of ‘Britain’s hottest new artists.’ David Zwirner Gallery, one of the world’s largest art galleries, signed a contract with her, and her works are going up in value day by day. 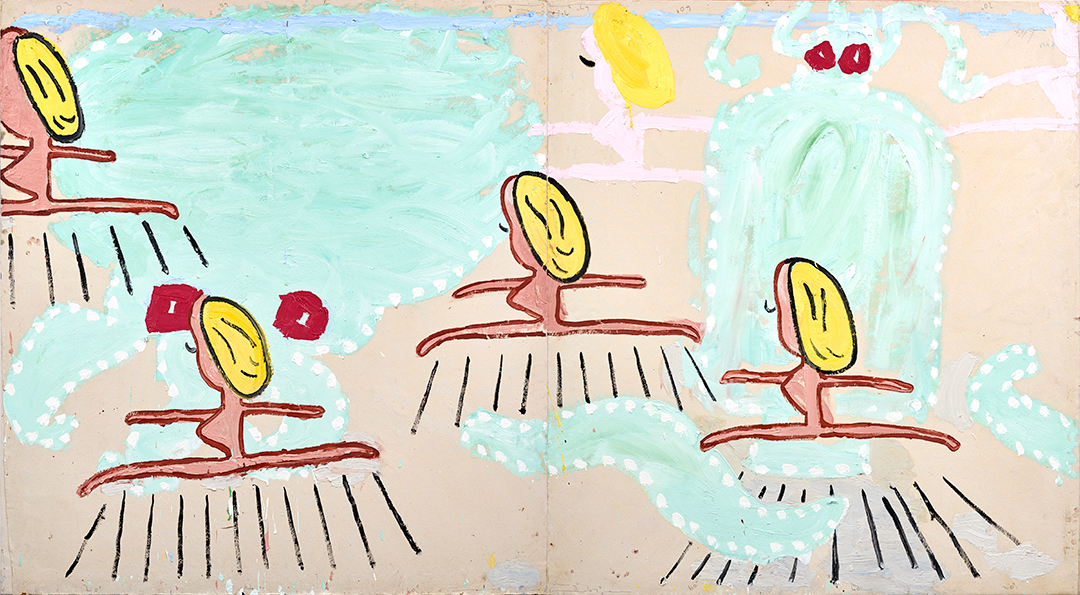 Jovial Paintings
At a time like right now where the whole world seems to have the “corona blues,” Wylie’s childlike, jovial paintings offer us consolation. Her works are on display at Hangaram Art Museum at Seoul Arts Center.
Titled , the solo exhibition exudes gaiety and warmth just like the artist herself. It is the largest solo event of its kind, featuring over 150 pieces of her original paintings as well as some that are privately-owned by art collectors. 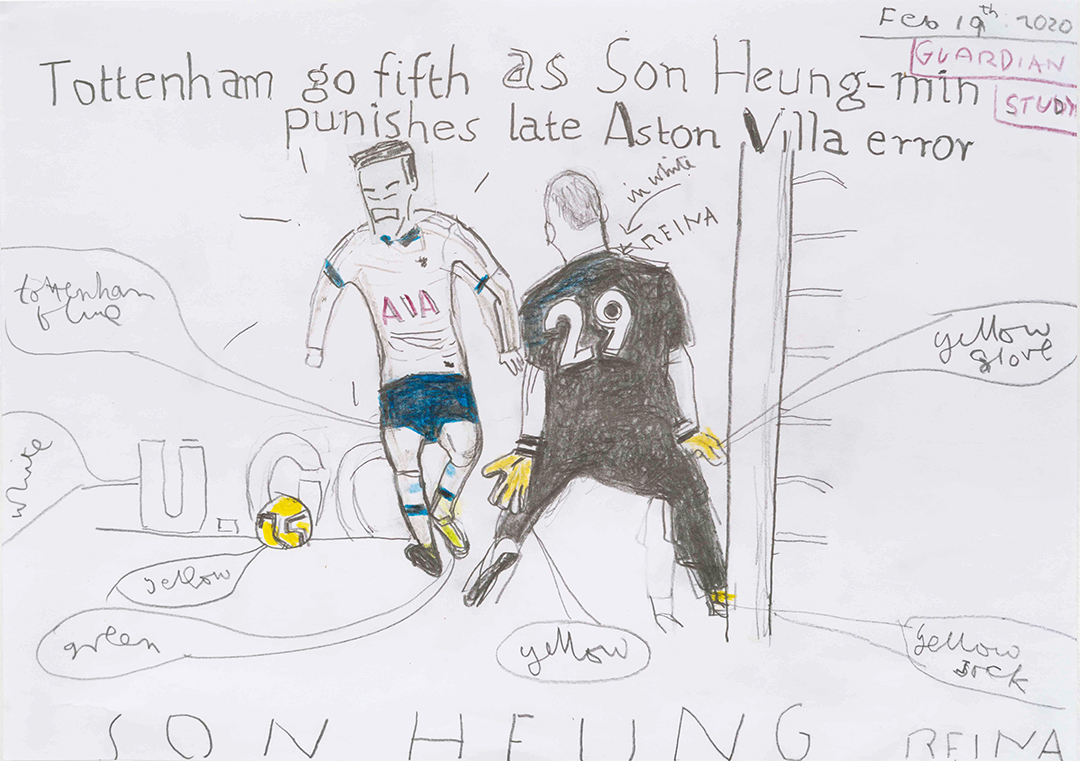 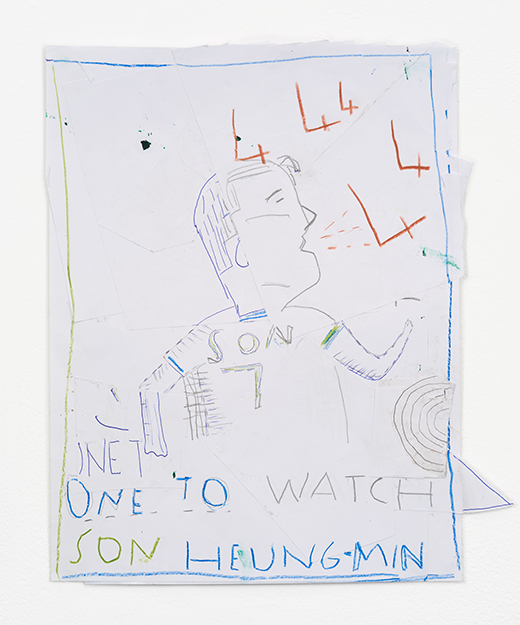 A drawing of Son Heung-min based on an article in <The Guardian> ⓒ Scoring 4, 2020 / Rose Wylie, Pencil, colored pencil, biro, oil and collage on paper, 30 x 26cm. Photo by Jo Moon Price 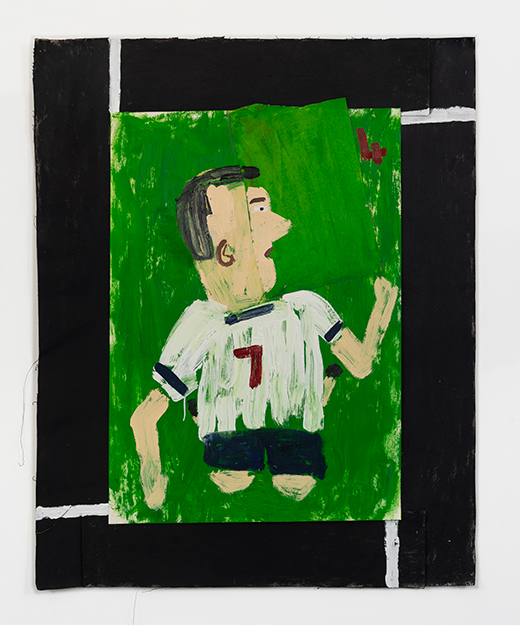 To be revealed for the first time at the exhibition is Wylie’s drawing of Korean footballer Son Heung-min playing for Premier League club Tottenham Hotspur. She has previously created paintings of legendary football stars such as Wayne Rooney and Thierry Henry as her husband was a huge football fan. Considering the exhibition is being held in Korea, it is doubly meaningful that her newest work includes Son who is showing exceptional performances this season.
Also featured in the exhibition are extra-large original paintings that received plaudits from curator Hans Ulrich Obrist, who had topped the list of the most influential people in the artworld. Some paintings are over 6m tall.

Exhibition Setting Reveals Rose Wylie
The exhibition consists of a space dedicated to seven themes in Wylie’s art and a special hall. The first room is about the daily life that the artist loves. It naturally reveals various sources of her inspiration including news, history, cartoons, and sports. The second room deals with cinema, particularly the films that inspire her. She re-created the movies by Quentin Tarantino and Werner Herzog whom she greatly admires, using visual language. The third room carries a secret. It will make public a collection that hung in Tate Modern Member’s Room for the first time. It will be an exciting moment for the public to see Wylie’s works that were once inaccessible. 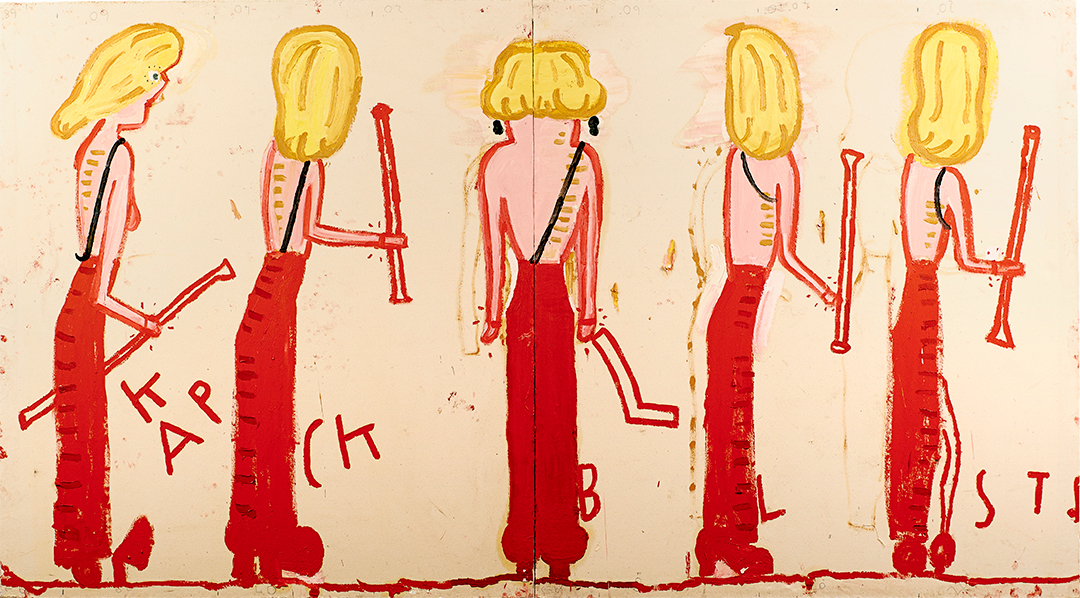 The fourth room presents history-inspired paintings under the banner of ‘Archive of Inspiration.’ Although she uses various subject matters such as politics, religion, history, and money, she was still able to formulate witty, bright-colored scenes on canvas, without making them appear boring and confounding. The fifth room focuses on football. Having been influenced by her husband, she is currently a fan of Tottenham Hotspur. She turned the games and players she had seen on TV and newspapers, which of course includes Son Heung-min, into a series of paintings to be displayed.
The sixth room consists of works featuring natural elements such as animals, birds, and flowers that have inspired her. What’s interesting is Wylie sketched them in a size that fits her imagination. The final seventh room is dedicated to her self-portrait as well as paintings of girls and women. Having put a halt on her artist career after marriage and childbirth, Wylie tends to describe women in their most confident forms. She expresses her solidarity with and support of the female community through her paintings.
There is one extra space, separate from the official exhibition hall. It is a replica of Rose Wylie’s atelier in Kent, England, captured by photographer Kwon Soon-hak. Standing in front of the little room, you can easily imagine a 86-year-young girl covered in paint staring at her painting. 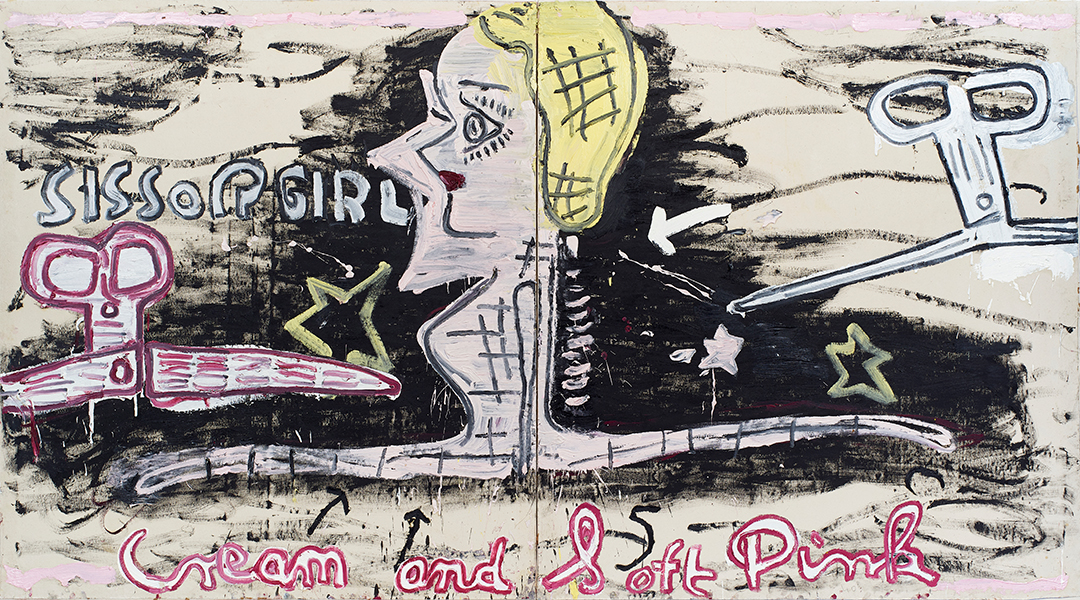 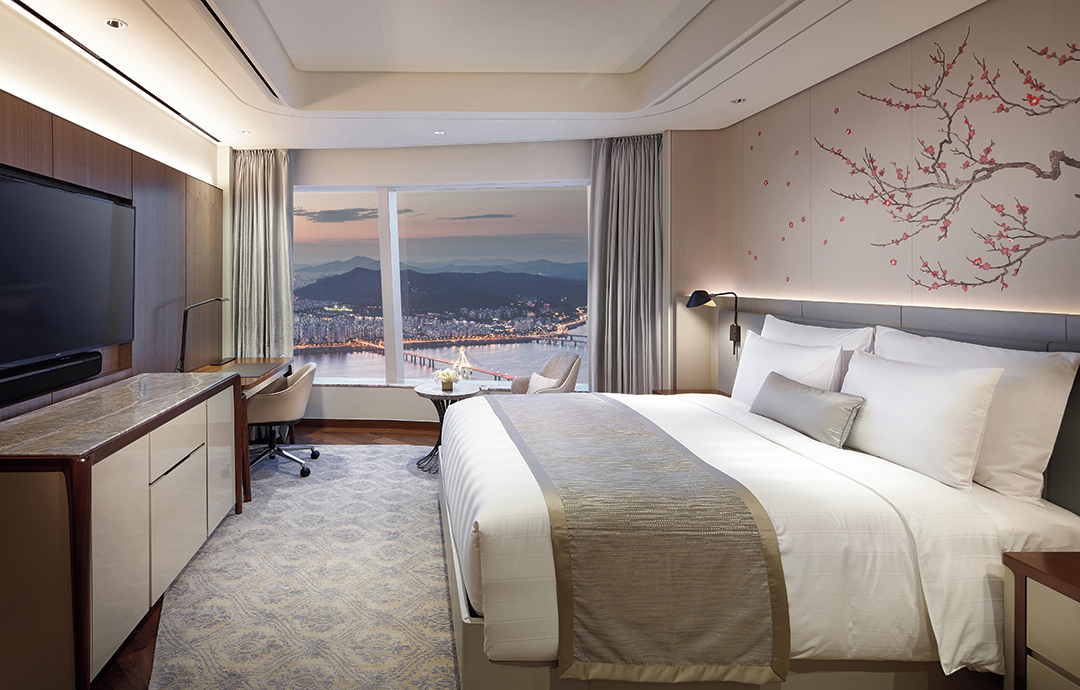 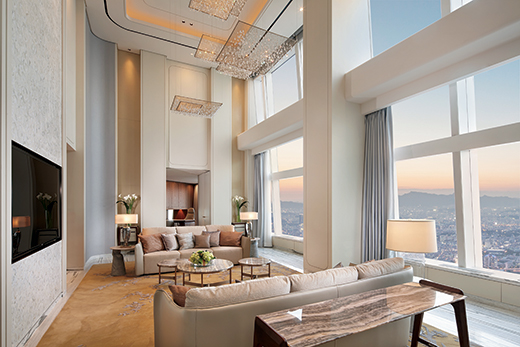 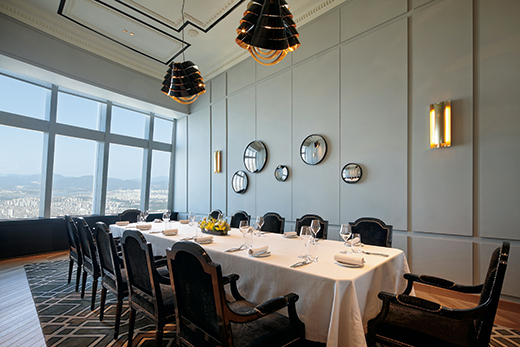 Where to Stay in Seoul: SIGNIEL SEOUL
SIGNIEL SEOUL is located between the 76th and 101st floors of LOTTE WORLD Tower, the tallest building in Korea. The luxurious hotel rooms feature a modern take on the traditional Korean beauty, along with panoramic views of Seoul’s skyline and fascinating nightscape through the large windows. A self-proclaimed “gourmet-dining” hotel, SIGNIEL SEOUL is famous for a variety of eating and drinking options, including STAY restaurant, overseen by chef Yannick Alleno with multiple Michelin stars. The indoor swimming pool located at the highest altitude in Korea and Evian Spa, the first to open in the country, all contribute to making the SIGNIEL SEOUL service one-of-a-kind.