Crafts of Our Time
We’ve visited two craft galleries in Seoul that have retained the traditional sense of beauty without losing sight of practical value for modern days. Meet Susudeomdeom and Craft Jangsaengho.
Craft separates itself from fine art with its practicality. Works of art are mostly fine as long as they can be admired and they can help with decoration. But the ultimate objective for craftworks is to be both pretty to look at and be useful. Crafts can only be worthy if they have these two qualities in full doses. 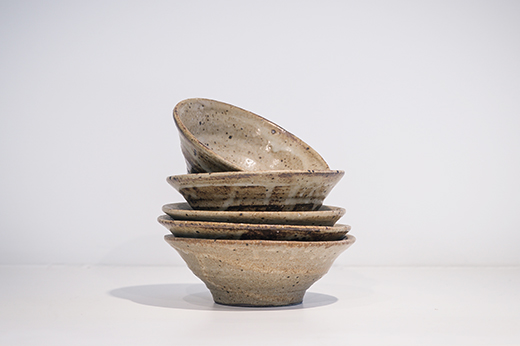 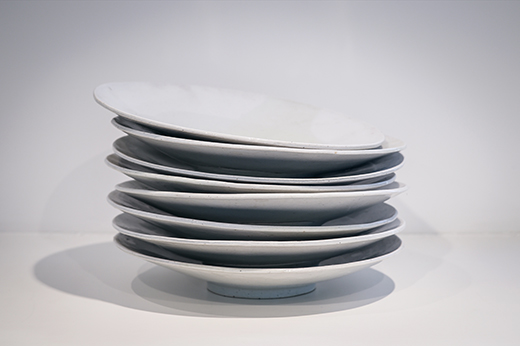 Between Sabal and Dawan
Such usage can change over time, or depending on the user. Sabal (rice bowl) is a prime example.
Dawan, especially popular among Japanese shogun and their warriors some 600 years ago, was the primary bowl during the Joseon Dynasty. Built by potters of the Joseon era who were mostly treated with scorn and disrespect, dawan was used to serve soup or rice, depending on its size. The smallest types had side dishes. Dawan was never meant to be used for matcha. But Sen Rikyu, the great Japanese man of tea who was known only to bow before sheer beauty, preferred the modest Korean bowl to the more splashy bowls from Tang Dynasty. From that point and on, dawan became a bowl not just for rice or tea, but for the spirit of the Japanese power.
Some 600 years have passed since the Joseon Dynasty. We visited craft galleries that have inherited our traditional beauty or have applied it to modern use while maintaining practicality. 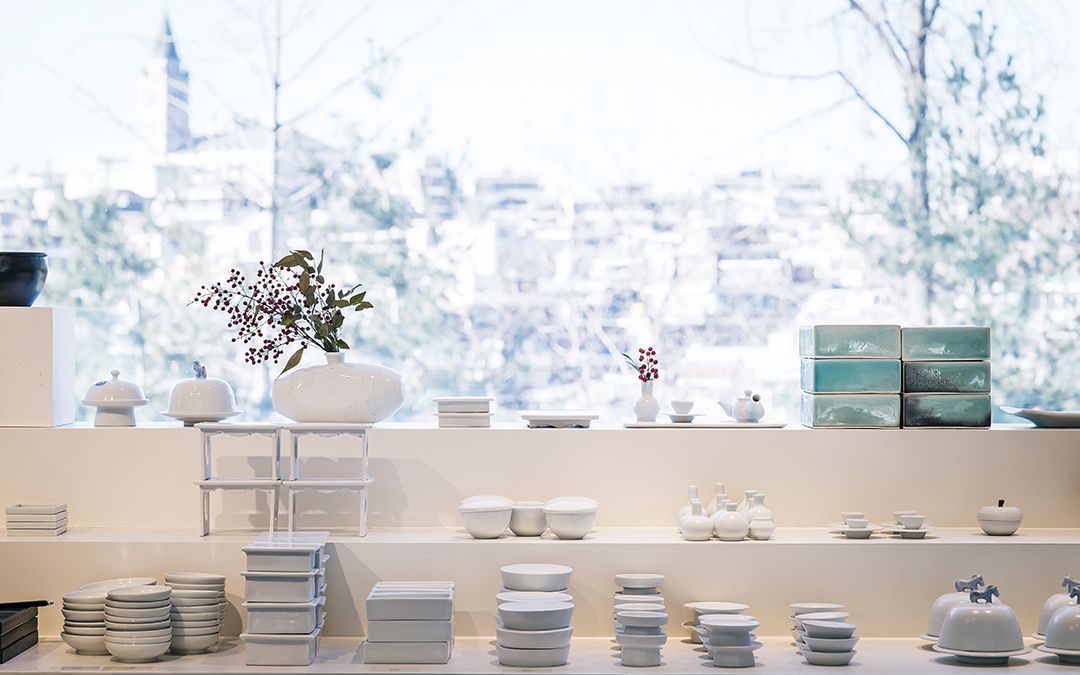 View of Susudeomdeom, with Namsan in the distance

Susudeomdeom, Where Traditional Meets Modern
When Park Ryu-sook, head of her namesake gallery, oversaw the Korean craft exhibition during the 2015 Milan Triennial, the exhibition was titled <Susu, Deomdeom, Euneun>. When everyone else was focusing on the big and the splendid, Park believed the true beauty of the Korean craft could be found in 'the simple, the calm and the subtle.’ And the exhibition was a resounding success. And Park Ryu Sook Gallery relocated from Cheongdam-dong to the current site on Sowol-ro in Yongsan, while expanding its focus into our traditional craft. When the new building went up, the underground floor and the first floor remained Park Ryu Sook Gallery, and the second floor became ‘Susudeomdeom,’ the new craft gallery. The third floor features a tearoom and an exhibition hall for visitors. 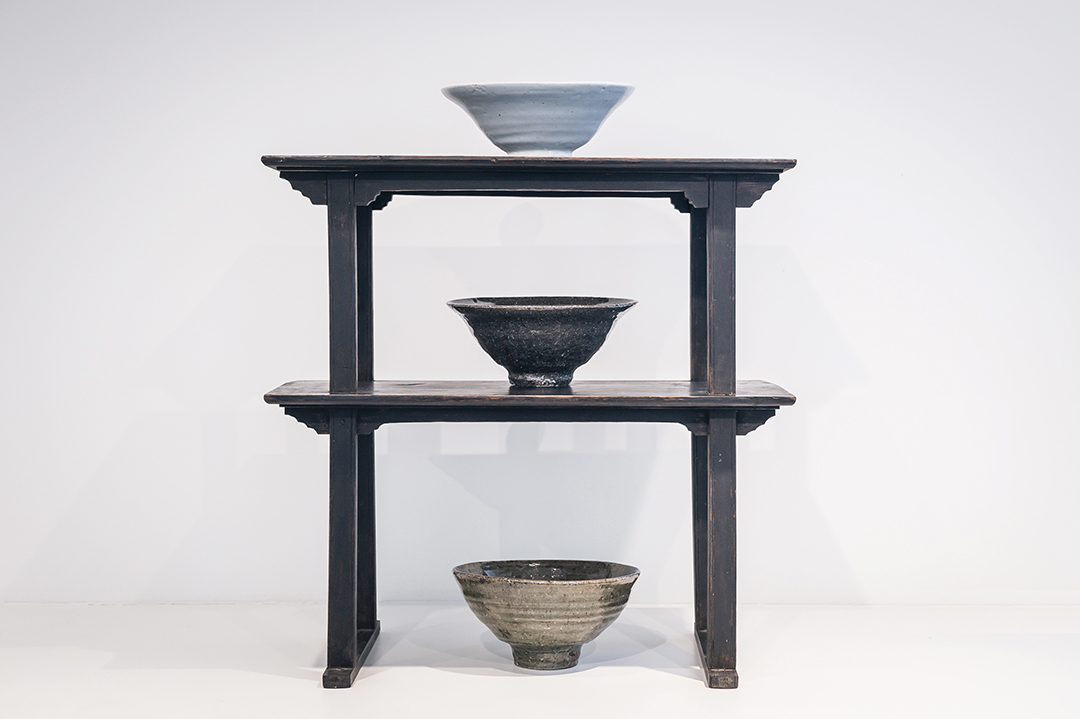 Three types of sabal (bowls) by Kwon Dae-sup, placed on an antique table 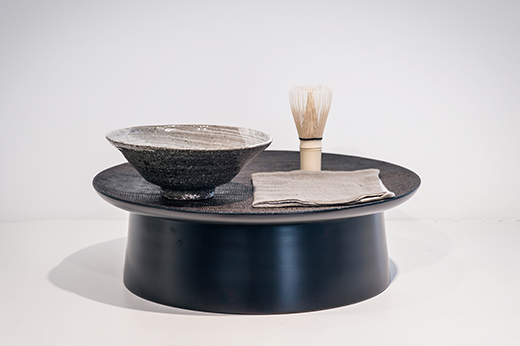 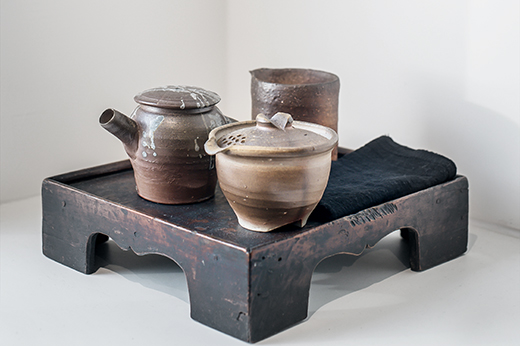 Craftworks should be for more than just viewing; people must be able to use them. Susudeomdeom has set up a long table and a huge kitchen so that its staff can serve visitors using craftworks picked straight from the gallery. And that’s really the essence of craft.
But pieces that are on display and on sale at Susudeomdeom aren’t just about practicality. Most of them are by artists who have fully inherited the traditional beauty of our craft and manufacturing process.
The opening exhibition for the new location featured Kwon Dae-sup, the potter best known for moon jars, and that tells you all you need to know about where Susudeomdeom is headed. RM of the K-pop sensation BTS once purchased one of Kwon’s moon jars and shared a photo on his social media. And RM also picked up a bowl from Kwon’s recent exhibition, ‘Sabal (bowl).’ Susudeomdeom has highlighted other artists, including Park Sung-wook, Ahn Si-sung, Lee Gyeong-no, Lee Heon-jeong, Lee In-jin and Lee Taek-soo. 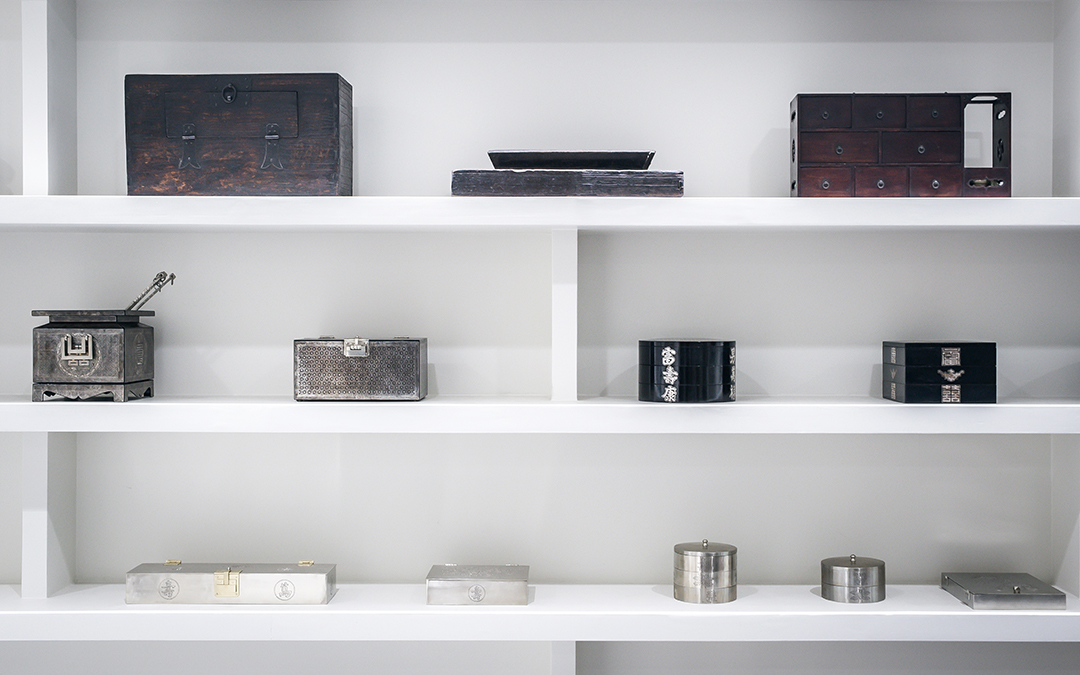 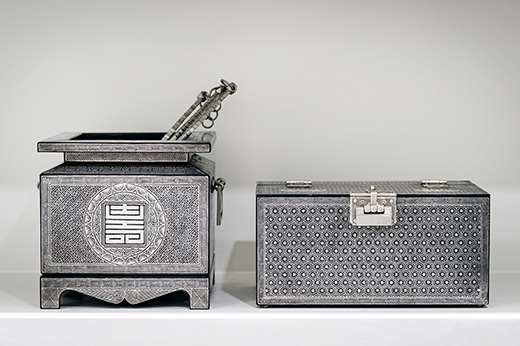 Brazier inlaid with silver and rectangular hob by Lee Gyeong-no 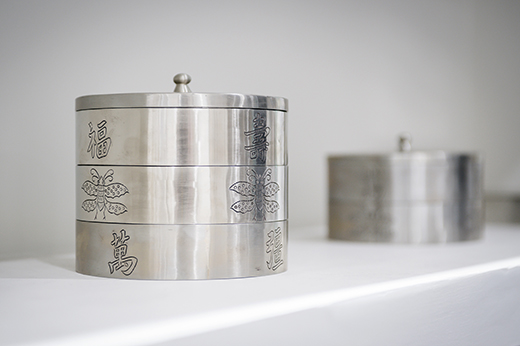 “The aesthetic sensibilities of Joseon are simple and calm. But they’re also witty and beautiful in their own ways,” Park said. “These pieces won’t catch your eyes right away, but the more you look at them, the fonder you grow of them and the more familiar you become with them. That’s the essence of our traditional art.” Indeed, craftworks at Susudeomdeom mostly fall on the simple side, but you can see a certain degree of depth and density to their subtle beauty.
Park has been enjoying working with Lee Gyeong-no, the nationally-recognized silver inlay master craftsman. When the artist, for all his techniques, was caught in a hard spot between the tradition and the modern, the two put their heads together and discussed design and usage. Their final products have been particularly gratifying. Their collaborations will be unveiled at Cheongju Craft Biennale in 2021.
And of course, you can follow their progress by visiting Susudeomdeom. 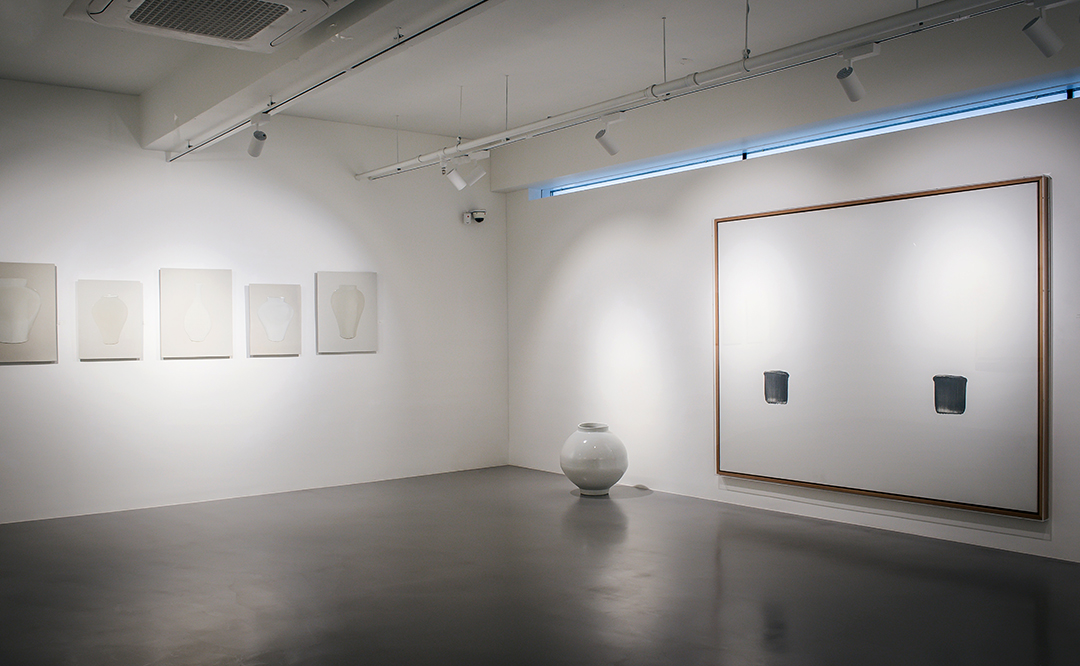 View of an exhibition at Park Ryu Sook Gallery. You can see a painting by Lee Ufan and a moon jar by Kwon Dae-sup. 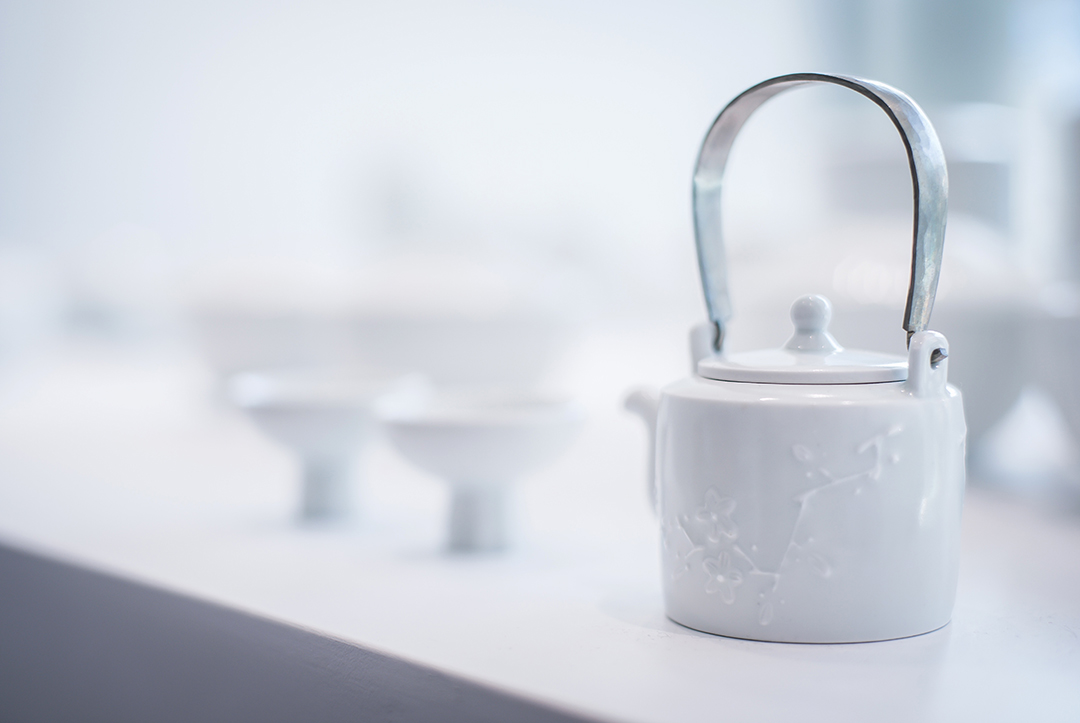 Craft Jangsaengho, located on Insa-dong 10-gil in Jongo-gu, is a crafts gallery that combines insight built from years of experience and personal taste. Jeong Hyun-joo opened this gallery, after watching her mother running Ancient Art Jangsaengho, a gallery with a focus on old art, for 40 years in Insa-dong. Along the way, Jeong herself developed a deep understanding in Korean ancient art and its tradition. Hers and her mother’s gallery are deeply connected.
“There aren’t that many galleries of this ilk,” she said. “There are many large galleries and art museums exhibiting craftworks. I figured it’d be nice to have a small gallery that suited my taste.”
Insa-dong has had its ups and downs, but it hasn’t lost its identity. You will still see plenty of galleries and mounters. 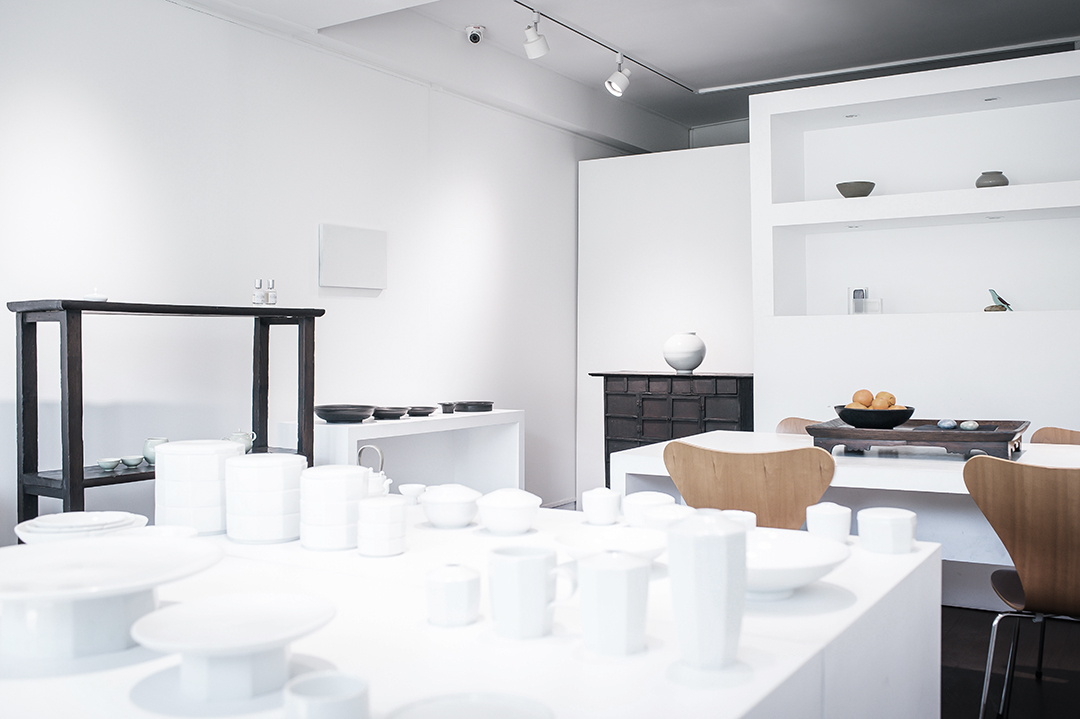 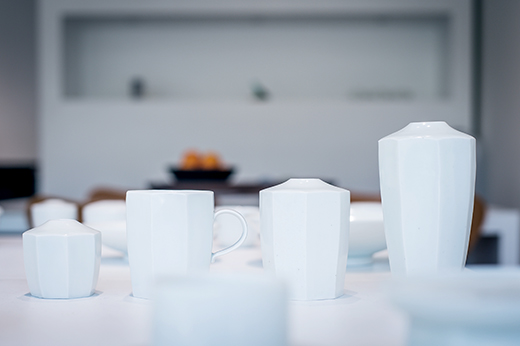 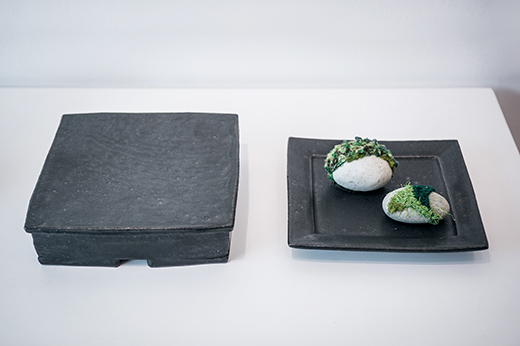 Craft Jangsaengho is home to ceramics and china that we use in everyday life. On the foundation of those, it also exhibits a wide range of objets and other works, mostly by young craftspeople of Jeong’s choices. Featured artists include Haeinyo Kim Sang-in, who specializes in white porcelain; Oh su, who builds decorative, knitted objets; and glass artist Kim Eun-joo.
Jeong hopes to do so much more. She has recently run multiple art projects, including Okindasil, aimed at promoting Korean tea culture; Git, which uses an old typography for printing; and Yeohang Craft with an eclectic group of artists. It was part of the 2020 Craft Week.
The latest project was inspired by ‘yeohang’ culture, referring to a new type of culture developed by the flourishing middle class in the late Joseon Dynasty. Those in the middle class who were relatively well off liked to gather to recite poetry, brag about paintings they bought, or to enjoy music and dance. Basically, our forefathers did in the 18th century what we do on Instagram today, when we post photos of our trip or latest purchase. They were “flexing” in their own ways then. 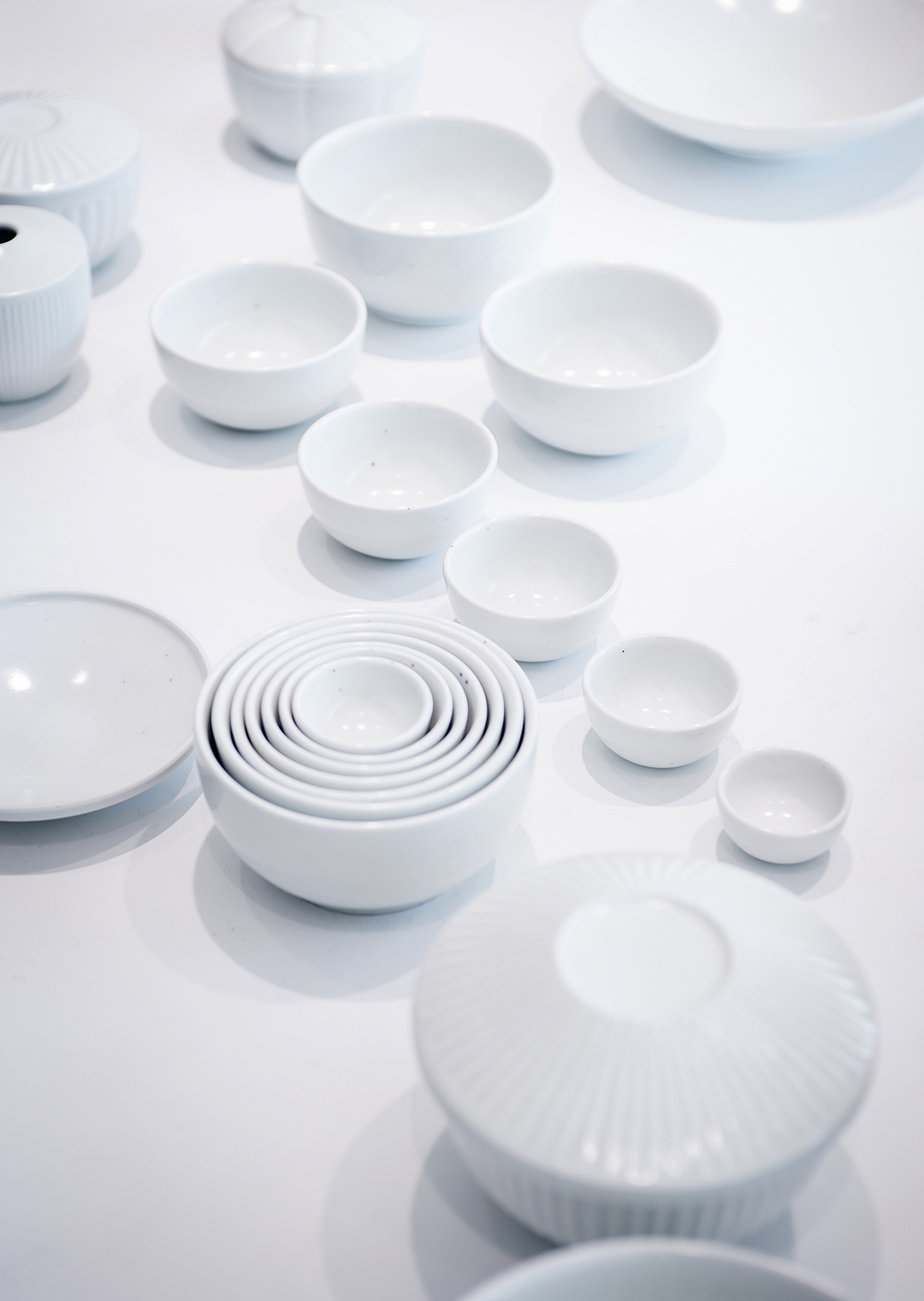 In January, Jeong plans to display contemporary pieces made using the old technique that produced ceramics outdoors without kiln. They’ll be arranged alongside earthenware from the Three Kingdom period. Jeong takes great pleasure in trying to see how an intangible piece of tradition can be applied to the modern times and what it can produce. Craft Jangsaengho brings together our traditional craft with modern practicality and sensibilities to create entirely new works. 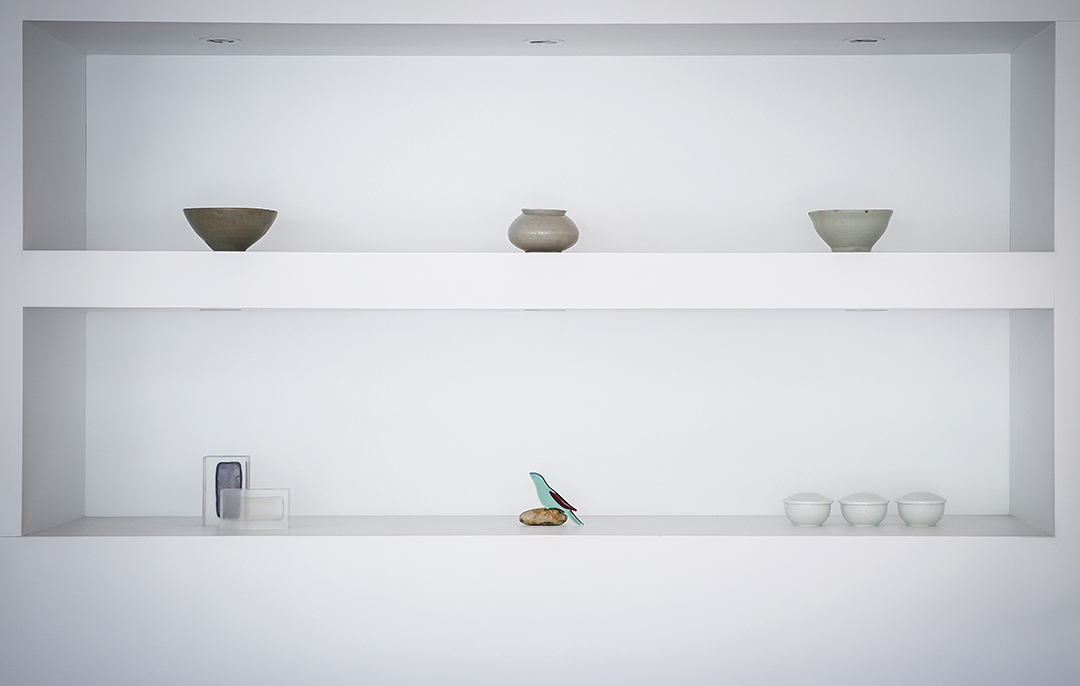 Goryeo celadon bowl, Joseon white porcelain vase, and glass bird by Kim Eun-joo are on display, as the traditional and the modern converge. 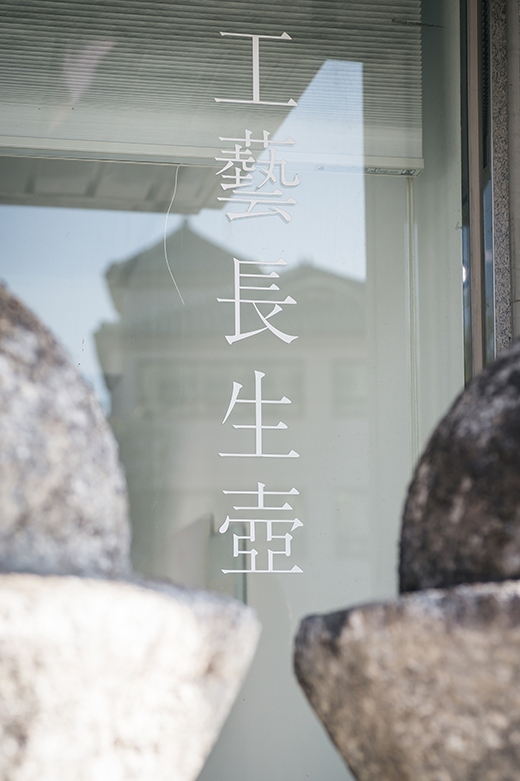 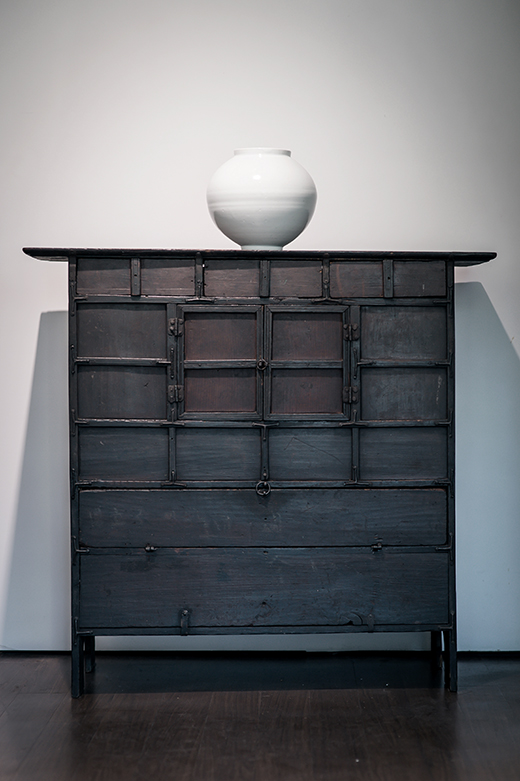