Pop-Up Books Showcase Seoul’s Landmarks
Korea’s National Treasure No. 1 Sungnyemun Gate, Culture Station Seoul 284 symbolizing the modern history of Korea, and the N Seoul Tower in the heart of Seoul literally pop out of a book.
The paper buildings that take shape as you open the book appear familiar, yet different. Three-dimensional structures standing on what was supposed to be a two-dimensional object offers a fresh perspective to the reader. Did Sewoon Arcade always look like this when viewed from a side? < Working Paper – Seoul > is a pop-up book featuring Seoul’s top seven landmarks, such as the Sungnyemun Gate, Dongnimmun Gate, N Seoul Tower, 63 Square, Culture Station Seoul 284, National Assembly Hall, and Sewoon Arcade. Page after page, the book creates a sensation that you are exploring a city. The ornate details and quality make you want to have one for yourself. Created by Seoul-based design studio ‘PRAG,’ < Working Paper – Seoul > is part of the < Working Paper > art book series. 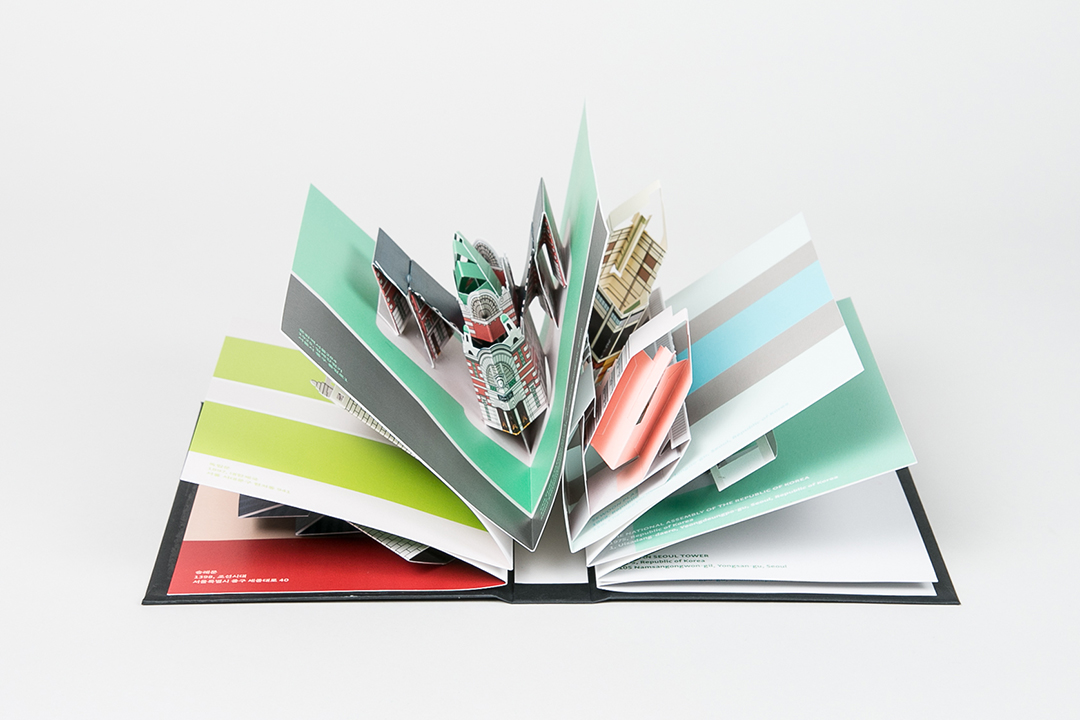 PRAG Studio is run by three college alumni who majored in metalwork. “Lee Gun-hee is in charge of equipment design and technical development. Cho Min-jung takes care of graphic design. Choi Hyun-taek focuses on product and space design in 3D. Each of us has to play a different role, but once a project is launched, we often work together.” Having worked in the Euljiro area, which has been a mecca of the urban manufacturing industry for many years, they are proficient in the way things are made and do not hesitate to try out new materials or methods. Works by PRAG include product and graphic designs, branding, and publications.

Q. What motivated you to launch the Working Paper series?
A. We like art books and even collect them. Because we are designers working in Euljiro and Chungmuro areas, we once imagined what it would be like to make an art book dedicated to our neighborhood. Then we found out that there was a product manufacturing sponsorship project involving Sewoon Arcade. We submitted our < Working Paper – Light > pop-up book design, which symbolizes the electronics market of Sewoon and the printing business of Chungmuro, and won.

Q. What message did you want to deliver through the Working Paper series?
A. The goal of the Working Paper series is providing an experience that goes beyond reading a book. We wanted to present sensations and experiences that are not to be gained from the messages that writings or drawings in a book will ordinarily deliver. A book is an immobile medium. We wanted to break that barrier. 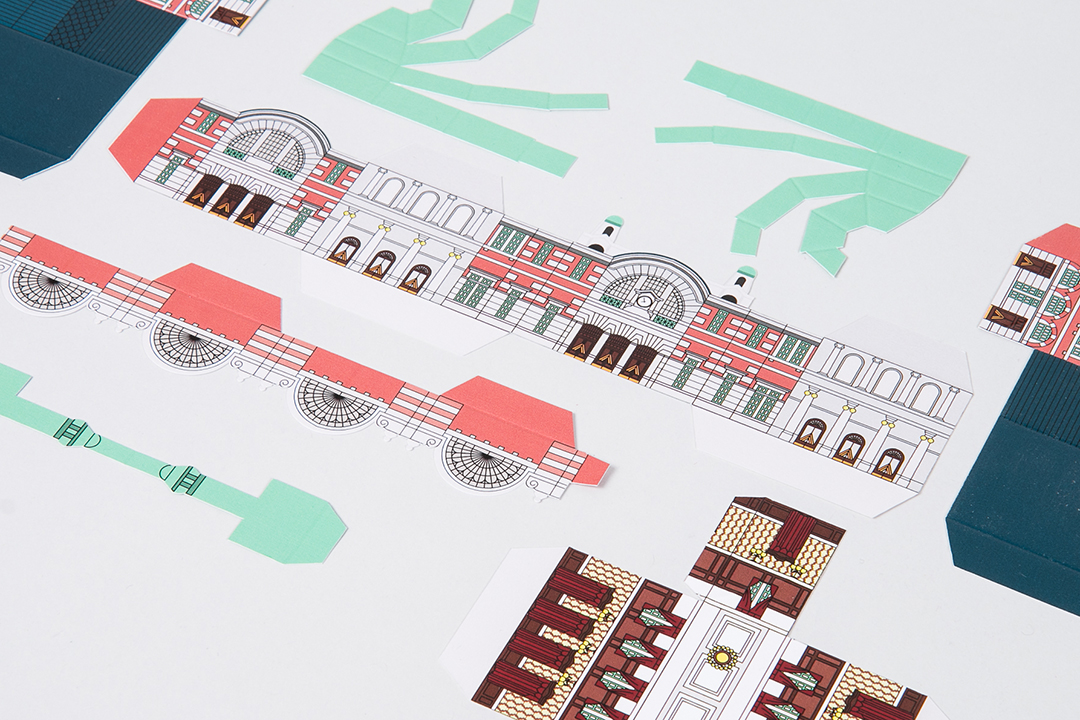 Q. We would like to know why PRAG continues to focus on and use the materials and manufacturing techniques developed locally, as seen in the examples of ‘Electronic Face Kit’ with electronic circuits, as well as birthday cards using copper tape.
A. We think a manufacturing technique originating in our neighborhood has a relatively low barrier for approach. As designers and manufacturers, we wanted to hear behind-the-scenes stories. While forming relationships with manufacturers in the nearby areas, we were able to hear various stories, and reflected them in our works on certain occasions.

< Working Paper – Light > is an art book with light switches hidden in the pictures that can be turned on or off as the reader imagines the book’s story. The conductive ink was used for printing so that electricity can travel across the paper from the PCB to the LED when the switch is activated.

Q. What was the criteria for selecting the landmarks for < Working Paper – Seoul >?
A. Initially, we agonized over what Seoul truly was. We read about ‘Square of the Three Cultures’ in a book titled < Seoul Declaration >. The idea was that Seoul is a place where cultures from three different time periods are stored. We decided we wanted to depict a city where many generations and cultures coexist. However, there’s only so much that can be delivered through a pop-up book. So we chose the landmarks representing better-known time periods including the popular Joseon dynasty, Korean Empire, Japanese colonial era, and the Republic of Korea.

Q. What was the most challenging part while making < Working Paper – Seoul >?
A. We worked hard on paper engineering. Rendering the flat landmarks images into pop-up structures was not easy. Going from 2D to 3D was challenging. 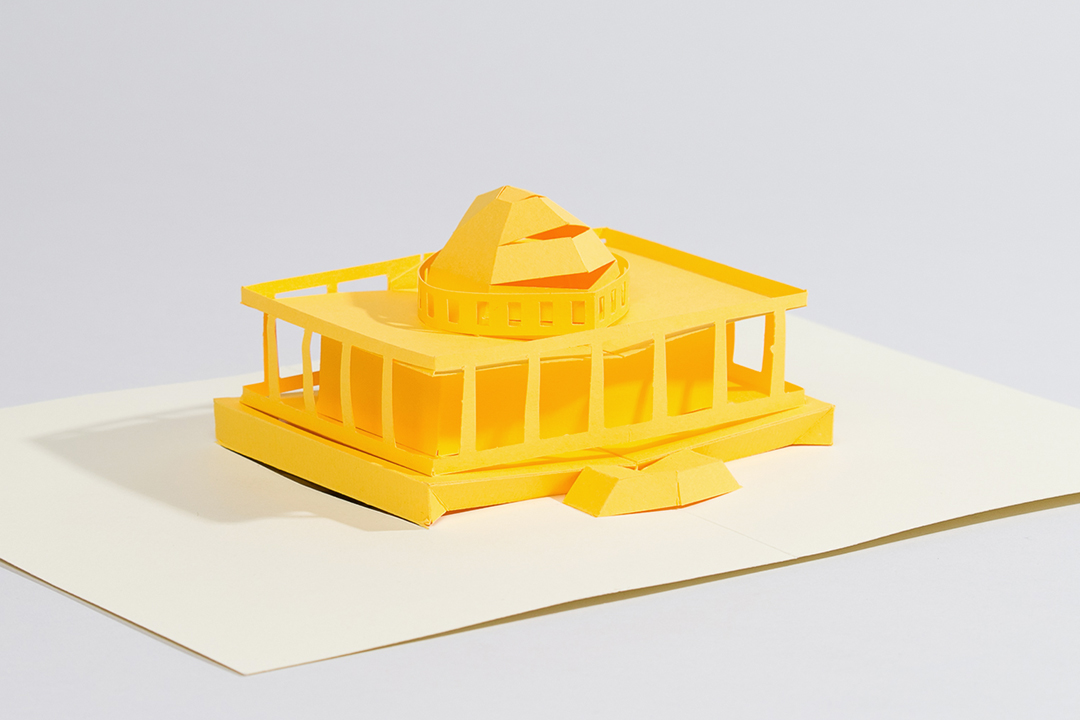 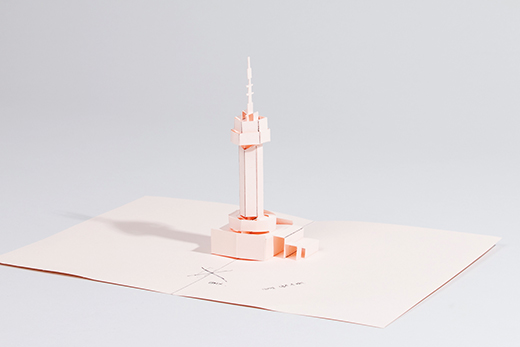 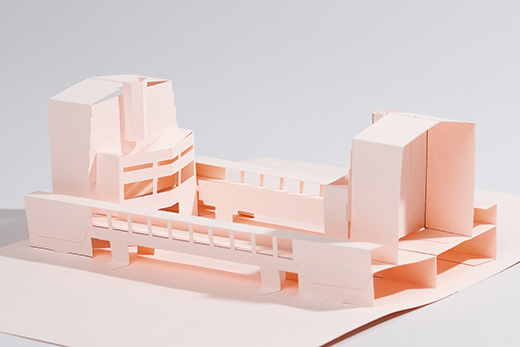 Q. It must have been difficult to re-create the details on such a limited surface.
A. The paper size doubles in width when it’s unfolded. We kept thinking about how we could downscale the massive landmarks. Before putting graphics on the paper, we continued testing various structures to decide what can be omitted or emphasized. We wanted to highlight the details to offset the obvious sizing issue. In the end, tiny little pieces of paper made it extremely difficult to manufacture the book.

Q. Which landmark was the most challenging in terms of 3D engineering?
A. The Sungnyemun Gate. We struggled to accurately depict the slanted eaves. The angle of the eaves would not allow the book to be fully open, so we had to adjust the angle several times. The surface area of the print also affected the holding power of the adherend. 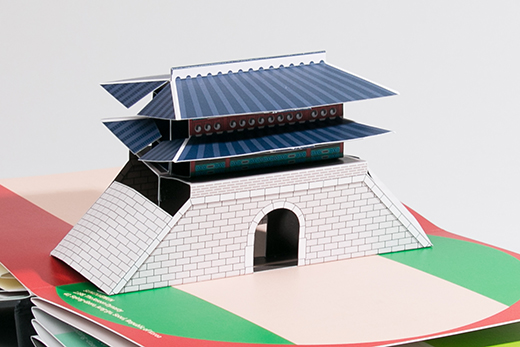 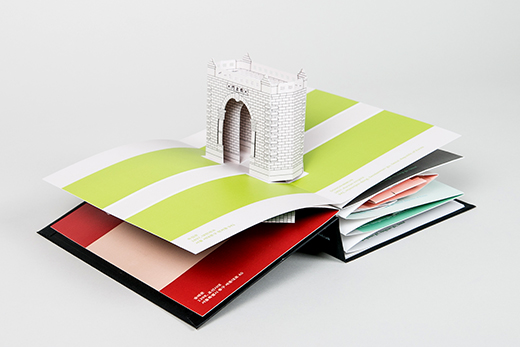 Q. Did you find any extraordinary aspects of the landmarks in Seoul during your work?
A. The landmarks that we had thought we knew well sometimes felt different. Some places were in the vicinity but we never went to see them. Some, I saw only once. There were also ones whose aerial photos were more familiar. For our future project, we thought it would be nice to design typical Seoul apartment buildings and low-rise villas with a piloti structure that portray the life of the working class in the capital city. 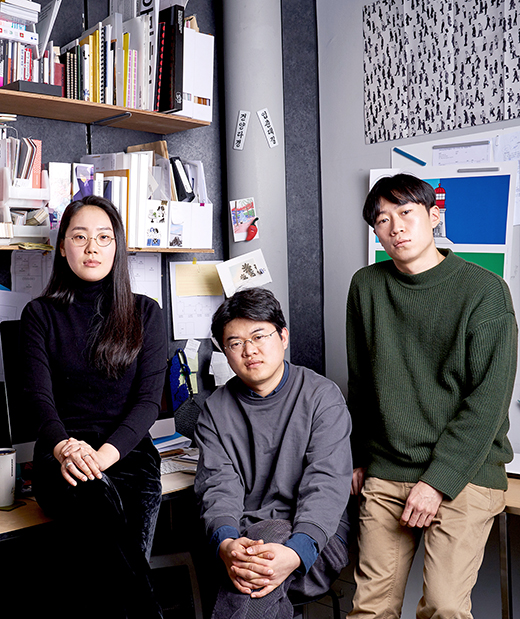 “The characteristic and strength of PRAG stems from our compounded system allowing fresh ideas to be tested in various ways.”
Q. Watching your works, we feel PRAG has no reservation when it comes to using new materials and techniques.
A. We think it’s because we have fun figuring out new methods. We do not make the most unimaginable attempts either. Often we try out a variation of our previous projects. The design and the process do get simpler as we make progress.

Q. What is the core value of PRAG in pursuing new projects or making key decisions?
A. With our own projects, we prioritize what we like to do. We create our products from start to finish. If we are not interested in our projects, it would be hard to see them to the end. If one of the members has an idea for a project, we fully support it. That strength sometimes gives us fresh perspectives on our commissioned projects. 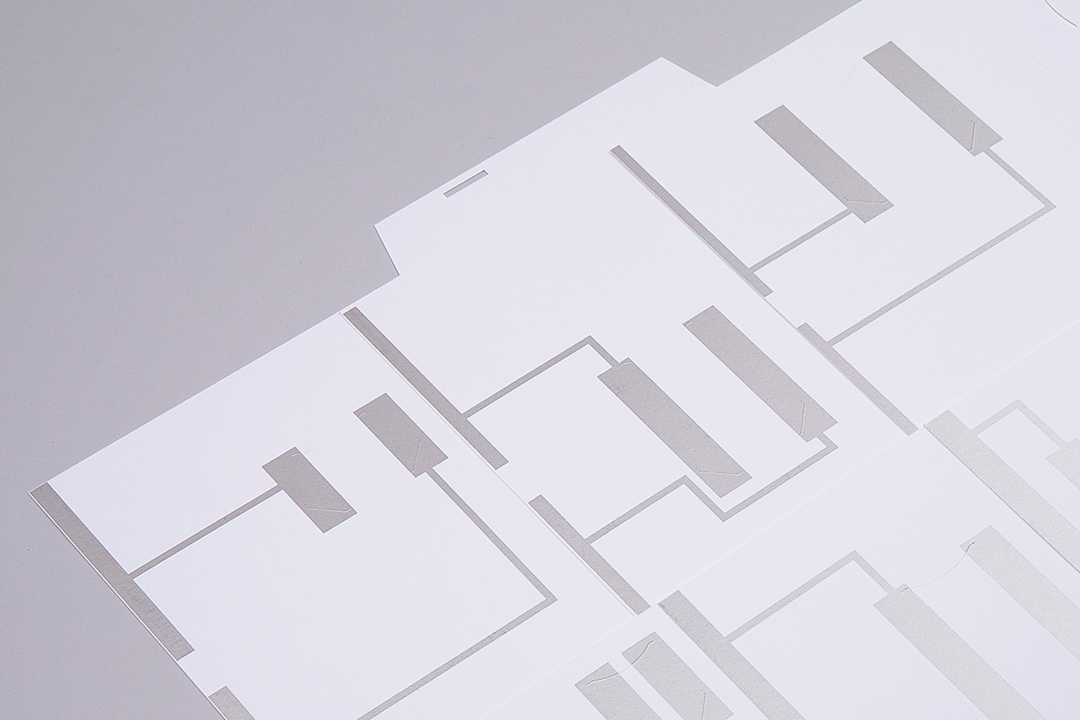 Q. What is the theme of the next ‘Working Paper’?
A. We are working on an audio version. We had the plan when we started working on < Working Paper – Light >, but it was put on the back burner due to the complexity of engineering issues. We intend to get it done this year.