The Simpsons Take You through Seoul
If Homer, Marge, Bart, Lisa and Maggie Simpson visit Korea, where would you take them? We covered the Gwanghwamun neighborhood in Seoul, and also went down to Jeonju, Busan, Daegu and Andong with the Simpsons.
The pop artist Lee Jong-kie places characters from American animated comedy series against the traditional Korean background, all the while establishing a consistent theme. Follow the Simpsons family in Lee’s works, and they will help you cover landmarks across Korea. 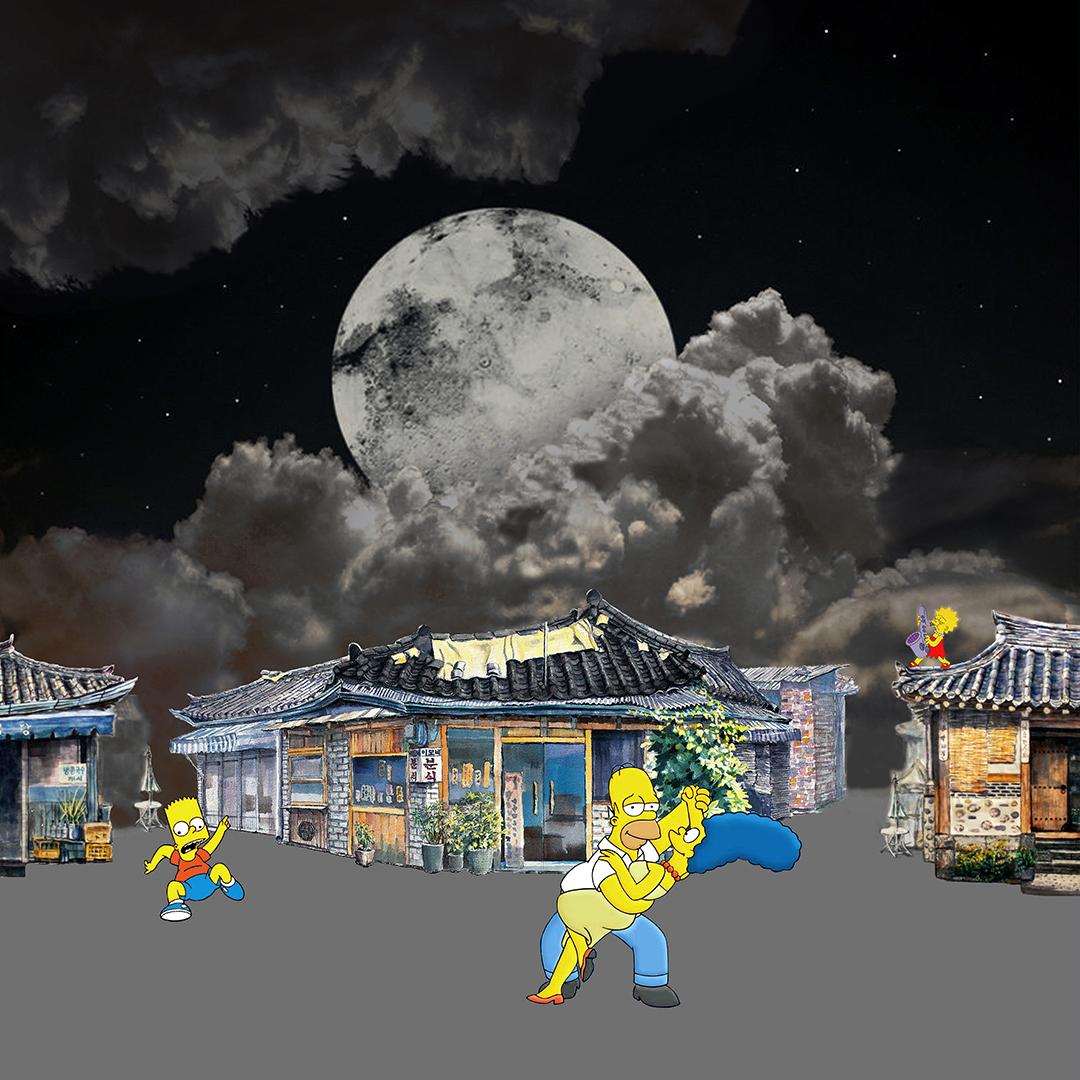 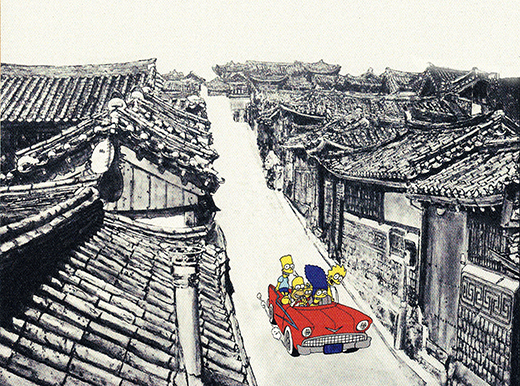 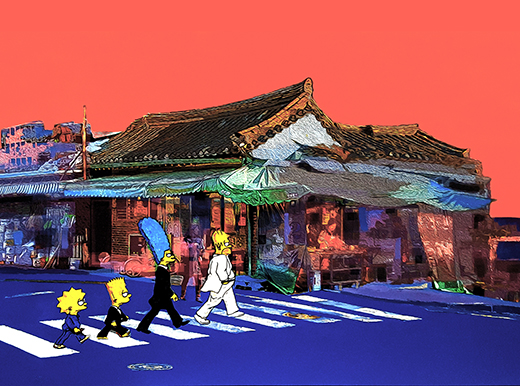 Visiting Bukchon and Seochon
During their stay in Korea, the Simpsons stay at a hanok on a street at 31 Gahoe-dong, a neighborhood commonly known as Bukchon. When you’re in Seoul, you should really start at Gwanghwamun. The Simpsons first take a photo in front of Gwanghwamun, the main gate to Gyeongbokgung, and take their Cadillac into the palace grounds. They cover Seochon, go past Geonchunmun on the east side of the palace, and then wrap up their day in front of Gyedong Aunt’s Snack Bar before returning to their inn.

Superman Flying Silently over Ocean in Busan
Superman is one of Lee’s main characters. The superhero often appears in Busan skies. Maybe he isn’t all that busy trying to protect us from evil forces, but Superman in Lee’s drawings are so tiny that you may lose it in the background if you don’t look for it carefully. He flies silently and peacefully over the ocean in Busan, as if he’d rather not throw himself into any action at all. 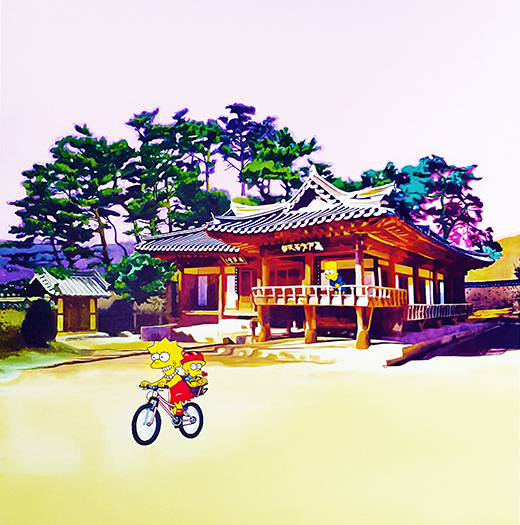 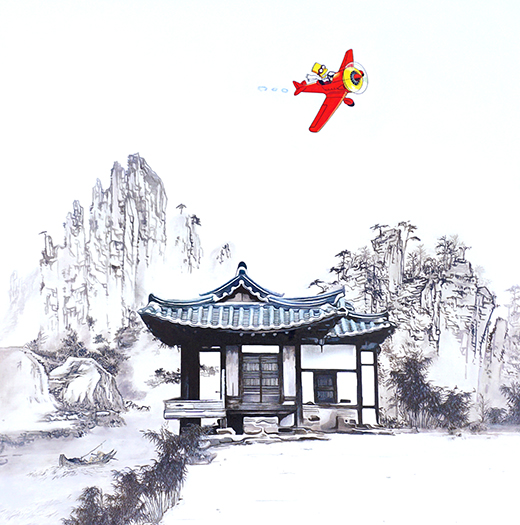 Visiting Andong and Daegu
Bart, Lisa and Maggie populate paintings of Daegu and North Gyeongsang regions. Lisa and Maggie are on their bike in front of Gwanggeodong, No. 3 Folk Cultural Asset for Daegu. The hanok stands inside the Village of the Nampyeong Moon clan. Bart flies his plane over Geunggudang in Andong. The ink-and-wash background is borrowed from the setting of Danwon Gim Hong-do’s Danwon Painting Album. 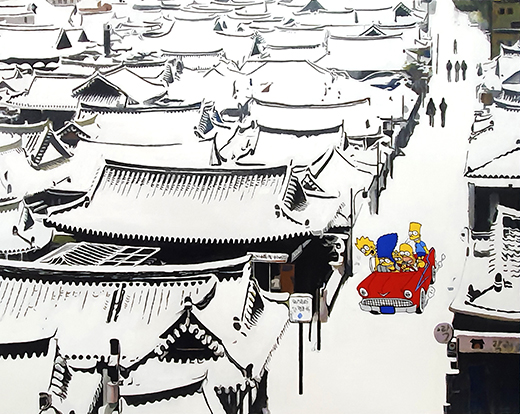 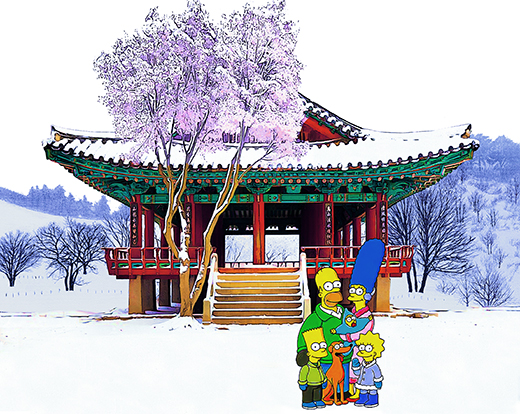 Family Trip to Jeonju Hanok Village
Many international travelers to Korea say they’d like to visit Jeonju. It has a village of hanoks that retains hints of an early Joseon Dynasty and is a great food destination. The Simpsons visited snow-covered Jeonju, snapping photos of Hanok Village and Omokdae, where Yi Seong-gye, the first king of Joseon, held a banquet during the late Goryeo era. 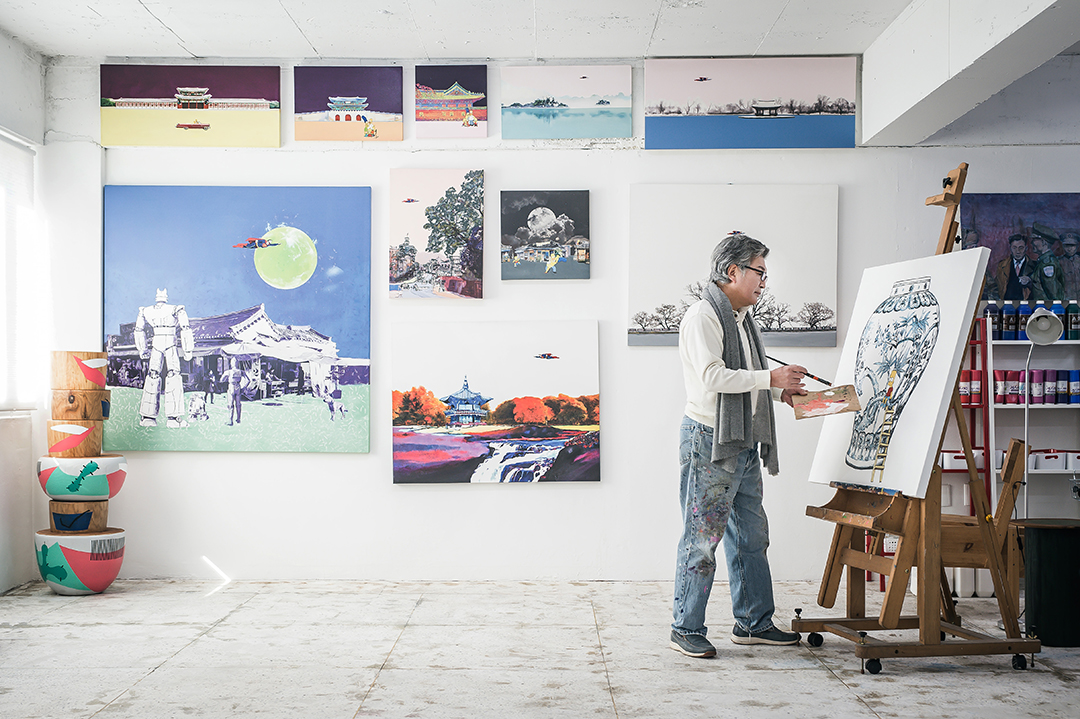 Inspired by Hanok That He Built
For Lee, it all started some 16 years ago. Lee was building a hanok home on a street in 31 Gahoe-dong neighborhood. Once, a group of young students marveled at the old-style home and took photos. Though the hanok had long been a traditional home of Korea, it was most forgotten and had become just a curiosity for the young. Lee decided it would be fun to create art out of this dynamic, where hanoks had been rendered obsolete among the new generation
At the time, was airing on cable. When Lee watched an episode, he was reminded of the young people that he’d met in front of his house. And he set out to project the Simpsons family members into the young generation or tourists who aren’t familiar with the Korean traditional culture, and have them tour 31 Gahoe-dong and other parts of Bukchon. This is the genesis of Lee’s popular series, ‘31 Gahoe-dong.’ 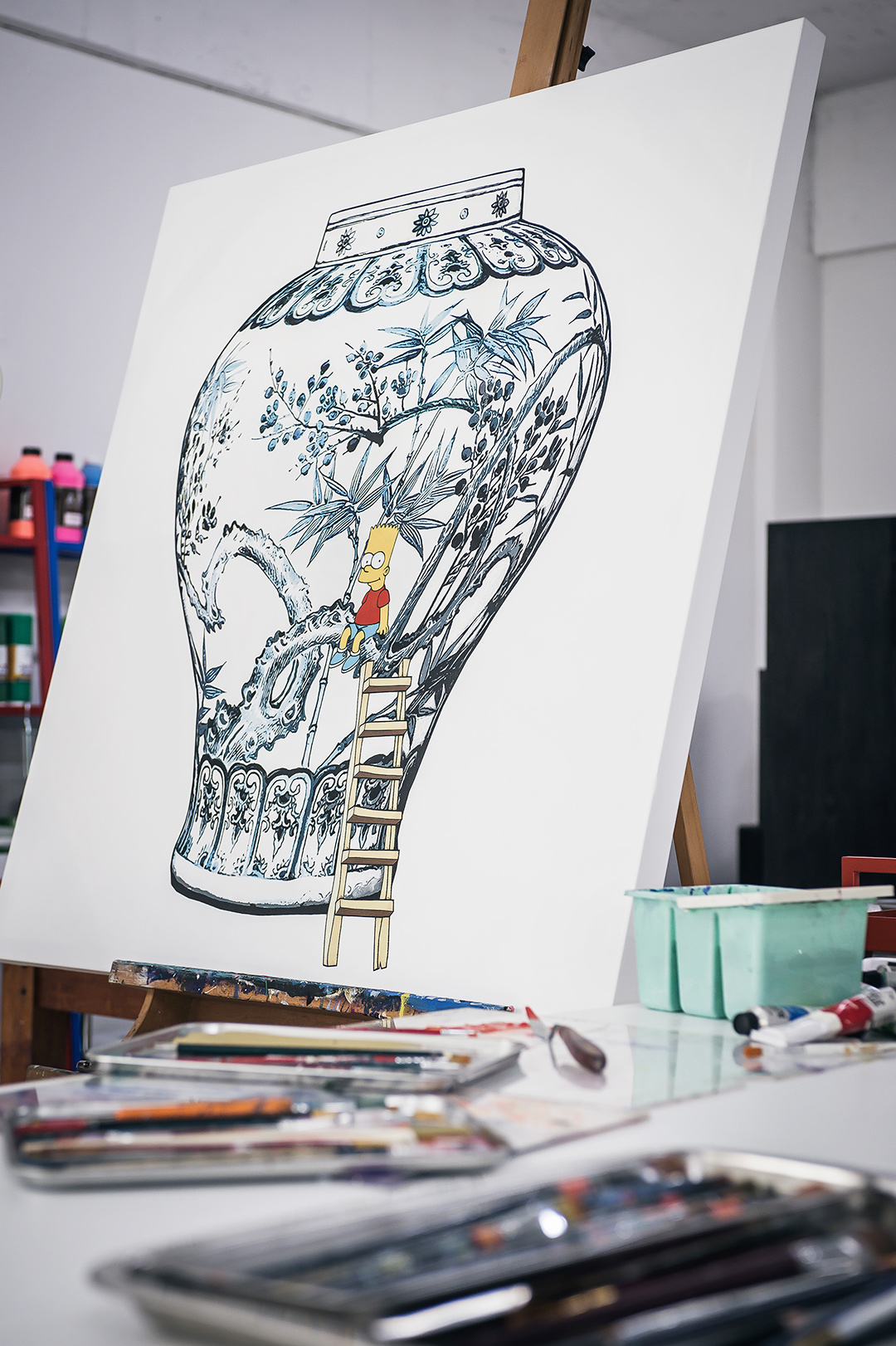 Humor, Parody Abound in Trips inside Paintings
Lee picked up his brushes again at a relatively late age, and the year 2020 represented a new start for him. In Season 4 of ‘Zero Base’ auction by Seoul Auction (an auction where the bidding starts at zero), Lee sold more works than anyone else. The most expensive piece fetched 10.1 million won. For the Seoul Auction commemorative 2021 calendar, Lee was the only Zero Base artist to be featured.
Lee has gained popularity because of his witty and fun approach, even as he blends in two elements that wouldn’t seem to work well together: the immensely popular Simpsons characters and the distinctively Korean features, such as hanoks, palaces and landscape paintings. More than anything, Lee’s paintings are easy to grasp and enjoy. 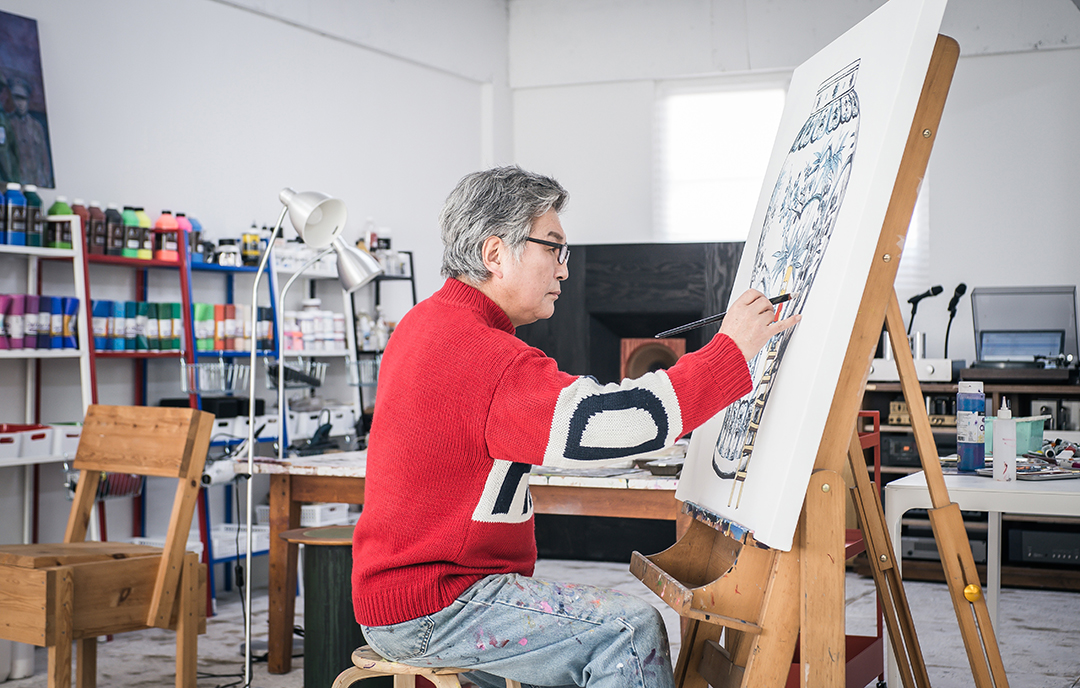 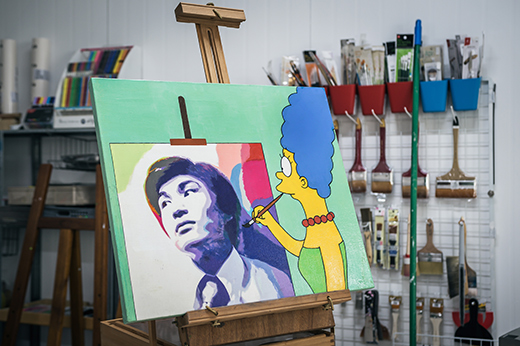 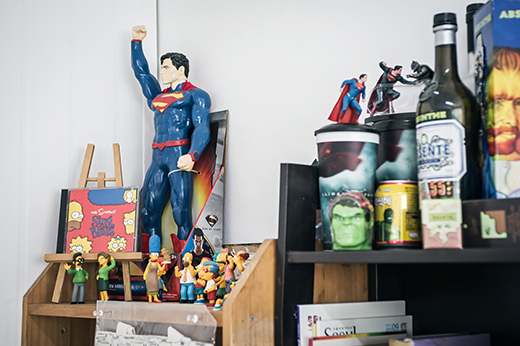 The pop artist uses his share of parody that at times borders on homage. The Simpsons’ walk on the narrow alley of Seochon is straight out of the famed cover. Superman comes out of nowhere to fly over the Gwangan Bridge and waters off Oryukdo. A propeller plane is in the air, smack in the middle of the backdrop by Danwon Gim Hong-do. Lee even borrowed from <The Lord of the Rings> to draw the painting on the ceiling inside Geonchunmun at Gyeongbokgung. Bart Simpson is cutting grass inside a pattern on mother-of-pearl lnlaid cabinet that Lee inherited from his mother. Bart’s father, Homer, is seen drinking beer inside a pattern on the cushion once used by a princess. With his witty touch, the artist has successfully found the intersection of pop culture and traditional culture.