Gardens by Piet Oudolf, Embracing the Life Cycle
Natural gardens, highlighted by brown grasses and small flowers, are growing more popular by the day. It all starts with Piet Oudolf, the Dutch garden designer who has transformed New York’s High Line and The Battery while setting international trends in garden design.
Piet Oudolf.
The name may not ring the bell for most, but he is one of the most respected figures in garden and landscape design today. Oudolf started making a name for himself in the 1980s while working on private gardens in Hummelo, Netherlands. He has since worked on places such as Lurie Garden at Chicago’s Millennium Park, The Battery in New York (formerly called Battery Park), High Line on the west side of Manhattan, landscape and garden for Hauser & Wirth Somerset gallery and art center in England and, most recently, the garden for the Swiss furniture brand Vitra’s Weil am Rhein campus.
Oudolf doesn’t just change landscape; he alters the way we perceive nature. He allows us to savor not just colors of plants, but the beauty that lies in their shape, form and texture. That’s not all. Oudolf has embraced the seasonal life cycle of plants in his gardens. And the same garden will offer different looks at different times of the year. That’s why perennials assume such an important part of his garden design. Oudolf helps erase prejudices and presents beauty that transcends time.
Oudolf is called the father of the ‘New Perennial Movement.’ 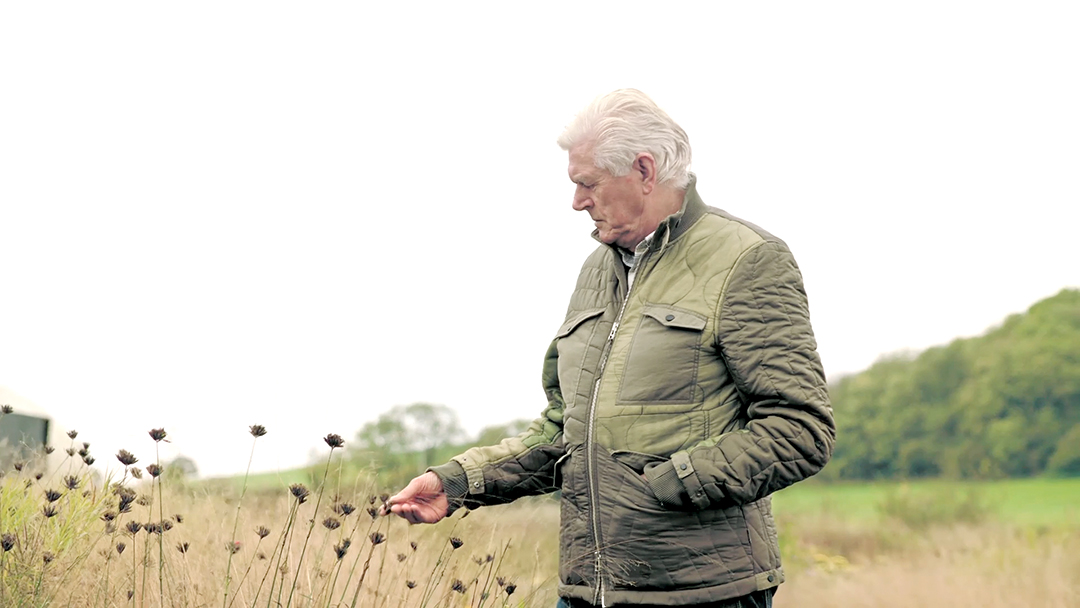 “If you have beautiful plants, it doesn’t mean your garden is beautiful. Something is complete when everything works together.”
Piet Oudolf
Start of Journey, Hummelo Garden 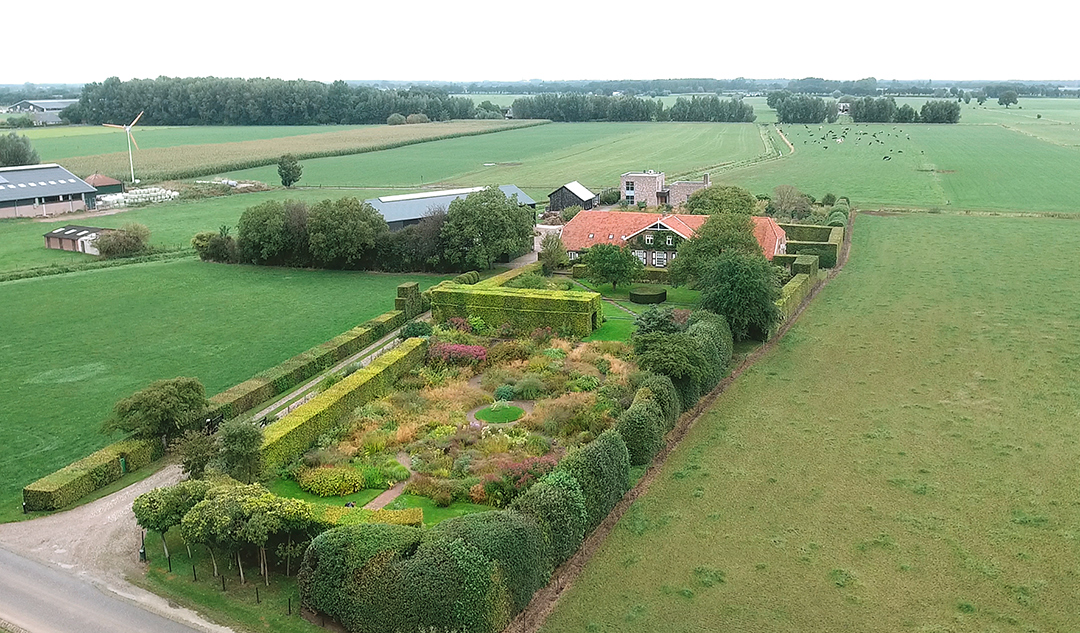 Hummelo garden from “Hummelo: A Journey Through a Plantsman’s Life”. Courtesy The Monacelli Press

One interesting part about Thomas Piper’s documentary titled Five Seasons: The Garden of Piet Oudolf (2017) covers Oudolf’s recollection of his young years, just when he was taking interest in garden design. He had no interest in taking over his parents’ bar and restaurant business, and instead move into the city with his wife, Anja, to take up many different jobs, working in factories and fishery wholesale. Oudolf had the feeling that he would be able to do something different and that it would have to be a creative pursuit. He just didn’t know exactly what that would be. And as his last resort, Oudolf started working at a garden center. And this is where Oudolf realized ‘plants’ were his calling. 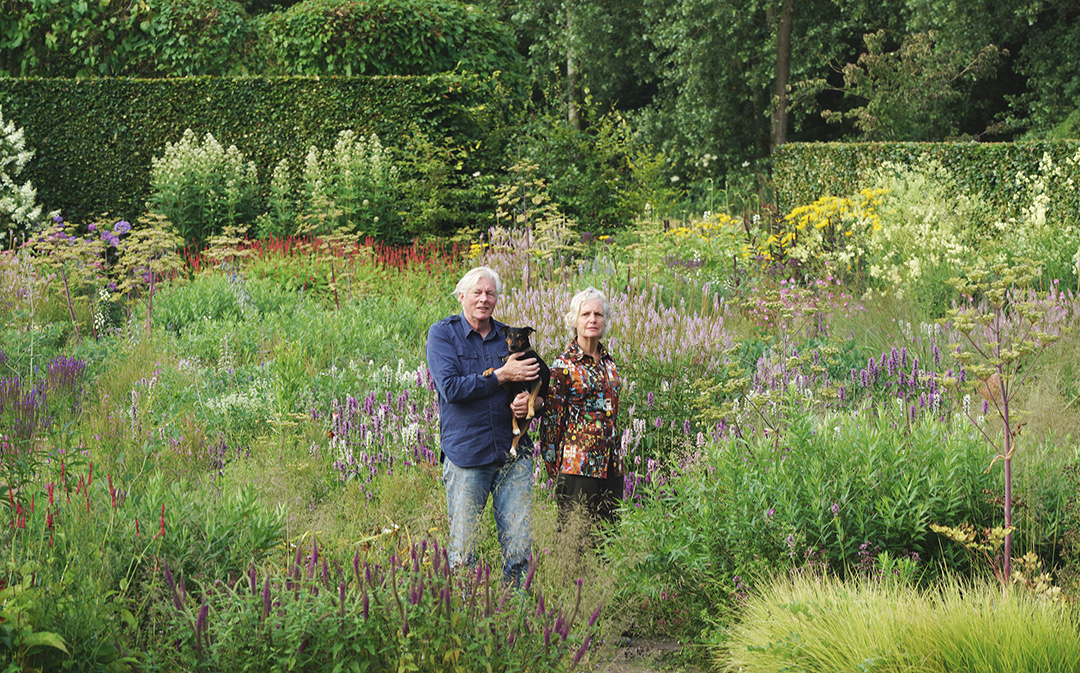 Piet and his wife, Anja, at Hummelo garden. “Hummelo: A Journey Through a Plantsman’s Life”. Courtesy The Monacelli Press

Later, Oudolf purchased a 19th-century farmhouse on the outskirts of Hummelo, a small Dutch town. In 1982, he and his wife opened a nursery. He wanted to make a living while, at the same time, securing plants for his own garden designing. He started cultivating his garden on a lot covering 4,047㎡. Oudolf mostly picked up perennials, especially rare types that couldn’t be easily spotted in the area. And the unique ambience created by those plants attracted people from all over the world seeking inspiration.
And this is really the most memorable part of the documentary. It has been decades since those early days, but it is obvious that the bucolic and romantic air of his garden then laid foundation for Oudolf’s garden design of today. 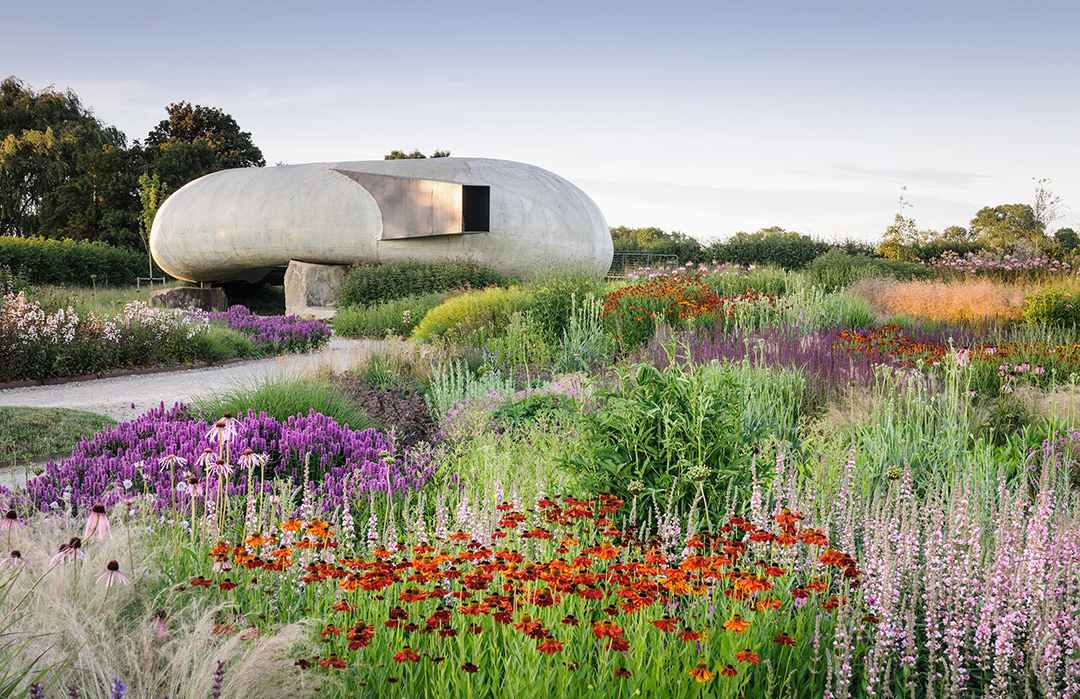 Hauser & Wirth Somerset. It was designed to blend in smoothly with the pastoral ambience of the area. Photo by Jason Ingram. Courtesy Piet Oudolf and Hauser & Wirth

Garden for Artistic Inspiration
There are abstract elements to Oudolf’s gardens. That’s because he is concerned more about how he wants visitors to feel than about what he wants them to see in those gardens. For instance, it’s not so important for Oudolf that people come and see particular plants. Rather, by showing the natural life cycle and seasonal changes, he wants to inspire different emotions in his visitors. Oudolf believes this is how people truly want to experience gardens.
And his design is truly one of a kind. Oudolf’s gardens inspire in intuitive and improvised ways, and it may seem as though he would treat his plants the same way. But it’s the exact opposite. In 1994, Oudolf took up his first public project with Utrecht Botanical Garden in the Netherlands. He wasn’t heard from after agreeing to take on the project, and then showed up on the day of ground-breaking and proceeded to arrange his plants, nary a blueprint in sight. Oudolf had already done the complicated work in his head, his plants all arranged in ways that were even more vivid than any drawing would have been. And Oudolf also knew how those plants would change over time. The way Oudolf goes about his design brings to the mind the work of a symphony composer or an orchestra conductor creating splendid music after studying tendencies and tones of every instrument. 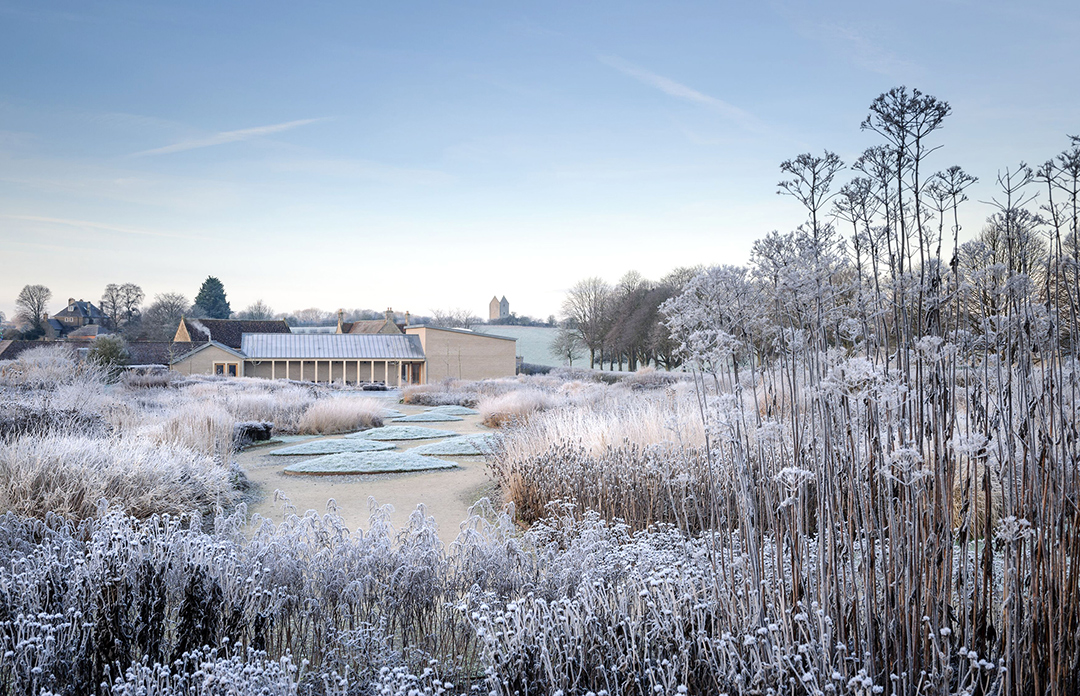 The dynamic, season-to-season changes seem to be a part of the design. Photo by Jason Ingram. Courtesy Piet Oudolf and Hauser & Wirth

“My biggest inspiration is nature. The idea of my work is not to copy nature, but to recreate spontaneous emotion of nature.”
Piet Oudolf

Noel Kingsbury, a British garden designer, is Oudolf’s co-author for the book <Hummelo: A Journey Through a Plantsman’s Life>, which was published in March. Kingsbury says Oudolf can’t stand repeating himself. Each project brings new arrangements and layering of plants, and Oudolf tries his hands at new ways of distribution and techniques. Over time, Oudolf’s design has gradually moved toward the wilder side of nature. And his public projects serve as clear indications of such evolution. 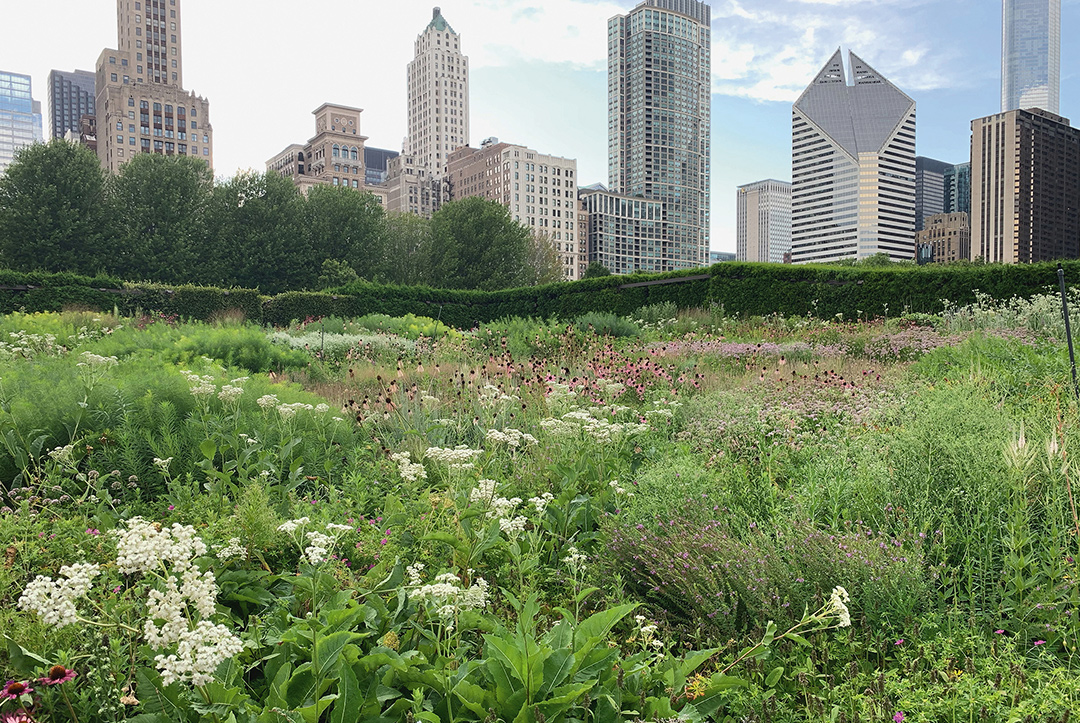 Lurie Garden in Chicago. A bleak-looking parking lot turned into a brilliant garden with a constantly changing face. “Hummelo: A Journey Through a Plantsman’s Life” (250p). Courtesy The Monacelli Press

Lurie Garden and The Battery, Changing Perception on Urban Landscape
Oudolf experimented with natural wild planning for the first time for Lurie Garden, located at Chicago’s Millennium Park. In Oudolf’s own words, it’s a garden “you can’t control, only conduct.” In 2002, while working on Lurie Garden, Oudolf visited Schulenberg Prairie near Chicago, where he discovered the beauty of North American native plants. When he came back from that trip, Oudolf changed the initial design for Lurie Garden entirely. North American prairie native plants would take the center stage.
And the upshot? Lurie Garden is credited with changing urbanites’ perception of public landscapes. A garden isn’t just a place you walk by; it’s where you visit to organize your thoughts and feel the wonders of life by studying rare plants. And there’s more. The unique harmony created by plants serves as a new source of inspiration. 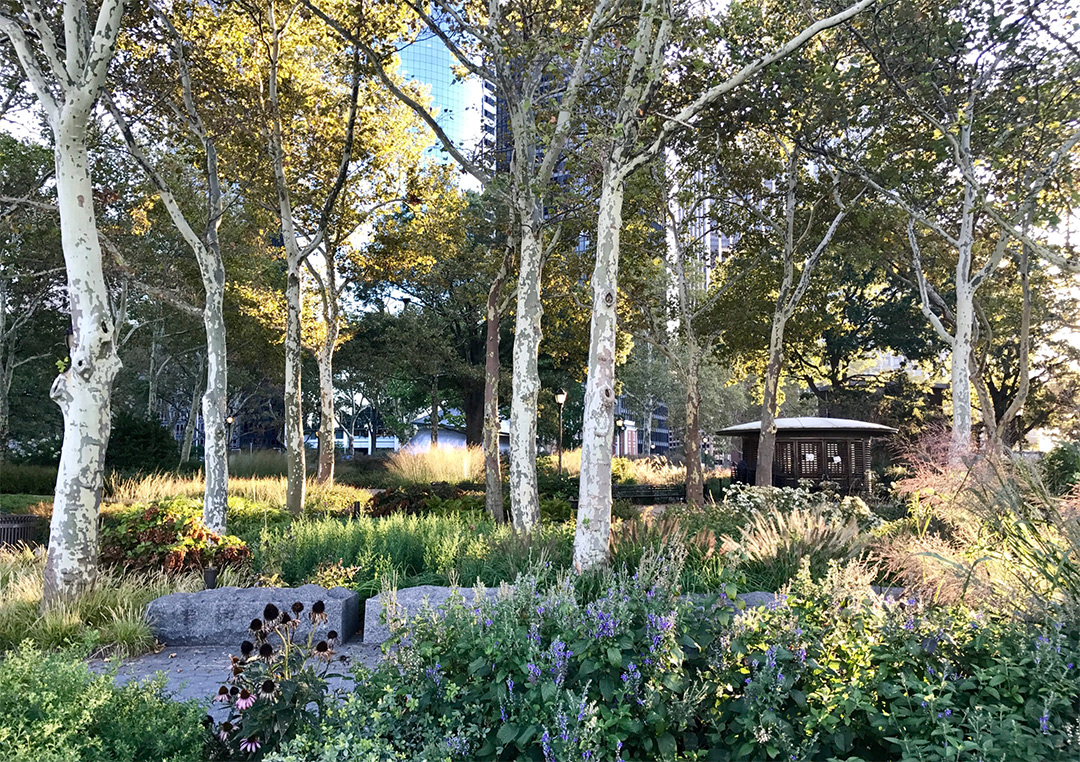 The Battery bosque garden and kiosk. Courtesy The Battery Conservancy 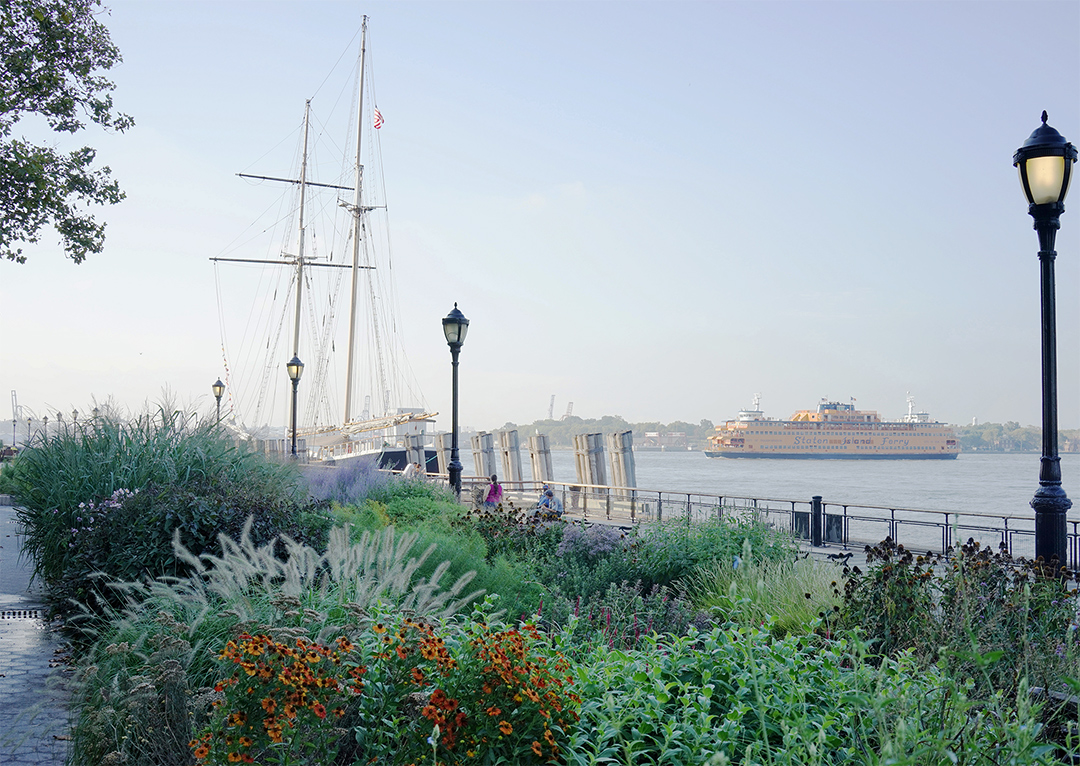 ‘The Gardens of Remembrance’ and walking trail, built to provide visitors with comfort and hope. Courtesy The Battery Conservancy

The next major project for Oudolf was The Battery, located at the southern tip of Manhattan. The park is bounded by New York Harbor to the south and by the Hudson River to the west, while covering 11,171㎡ of land. It’s a popular spot for local joggers or ferry travelers, and also tourists. The Battery has some interesting history. It was originally inhabited by Native Americans, and served as the landing point for immigrants.
Oudolf was tasked with creating a new-look garden based on a master plan set in 1980s. He had about 18,116㎡ of space to work with, and arranged London planes, tens of thousands of perennials and bulbous plants. Oudolf ended up building a garden that changes its colors every season and even over the course of a day.
Given the garden’s proximity to One World Trade Center, Oudolf built a therapeutic garden and path that could provide people with hope. People wanted to know more about plants there, and he put together a special guidebook on them. 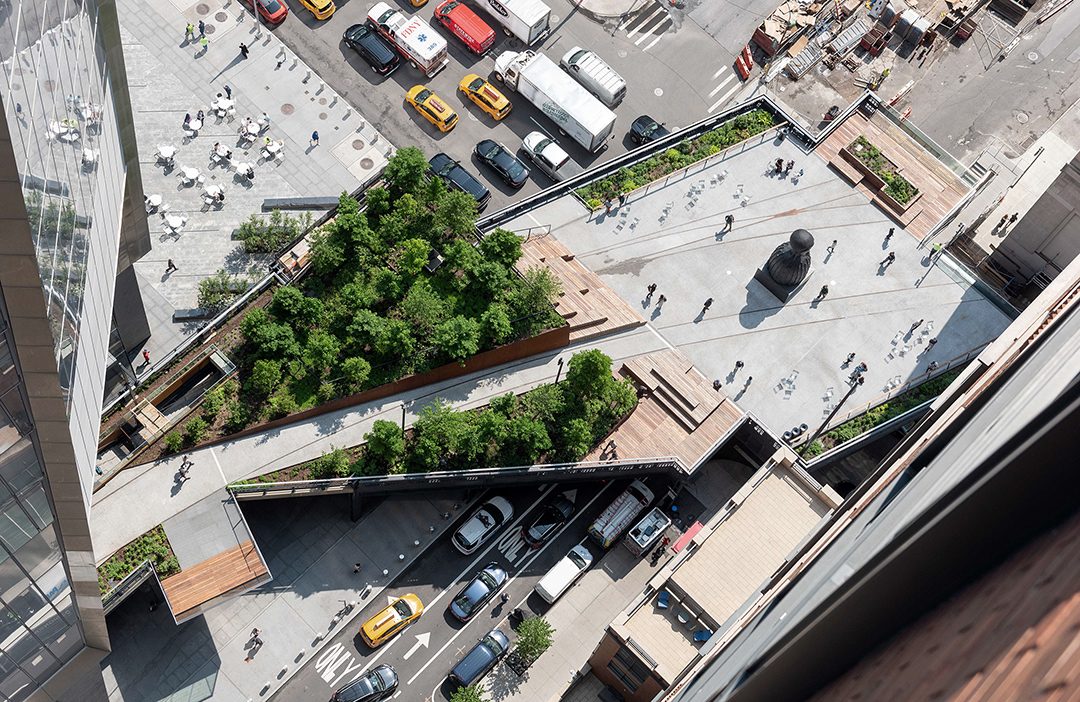 High Line, Another Leap into the Wild
Oudolf is the preeminent designer when it comes to public garden projects that forge new connection between cities and their residents. High Line is the pinnacle. In 2004, people behind efforts to renovate elevated rail tracks abandoned for 40 years, reached out to Oudolf. James Corner, the lead designer of the project, had an ambitious vision, and asked Oudolf to help retain the wild vibes of the tracks. Also, Corner wanted Oudolf to place different types of plants at each narrow and long section, so that visitors would get a sense of being at different locations as they walk on the tracks. 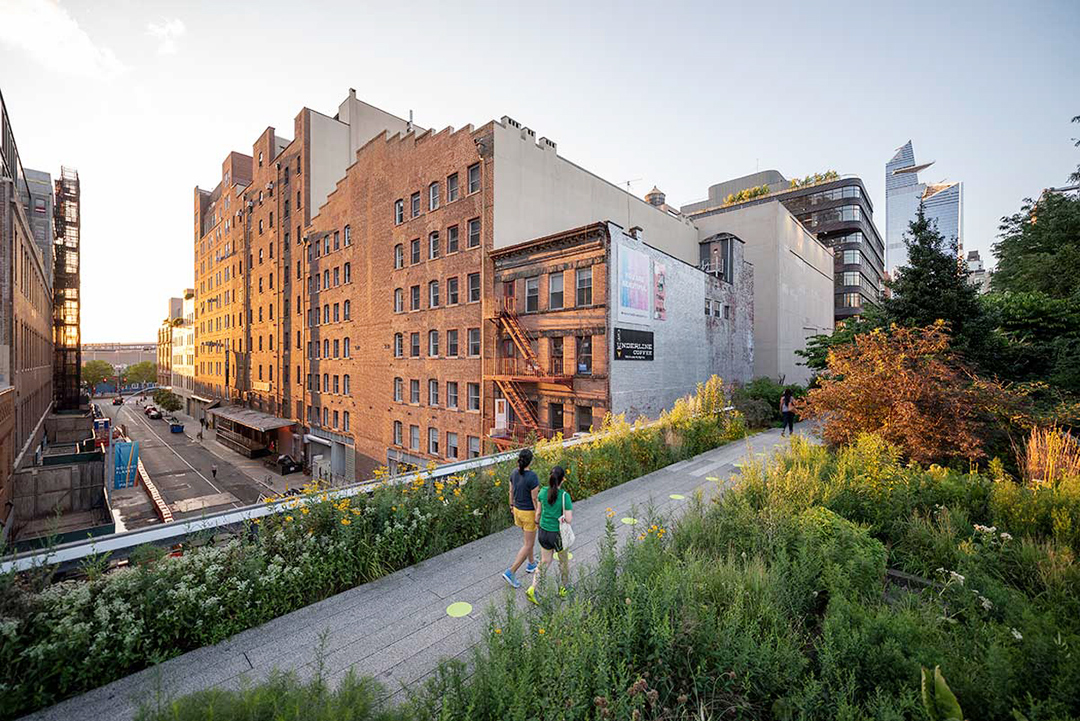 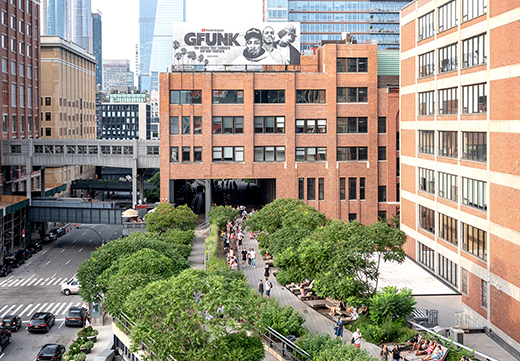 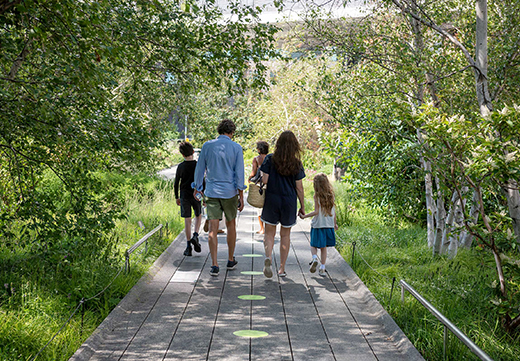 Natural patterns of woodlands and prairies have been created using local vegetation. Photo by Timothy Schenck. Courtesy Friends of the High Line

It was an unusual setting for a garden, with rather specific directions in place. High Line represented a challenge for Oudolf, a project that could push his design to a new level. The repurposed railway opened in four phases between 2006 and 2019. Up on these tracks, plants evoke the natural patterns of woodlands and prairies, while vegetation even reflects the old history of the former industrial district. Visitors to High Line get to enjoy the wilder side of nature and experience different types of moods, scents and emotions.
You will feel as though you’ve left the city for a romantic getaway. Oudolf has worked his magic. 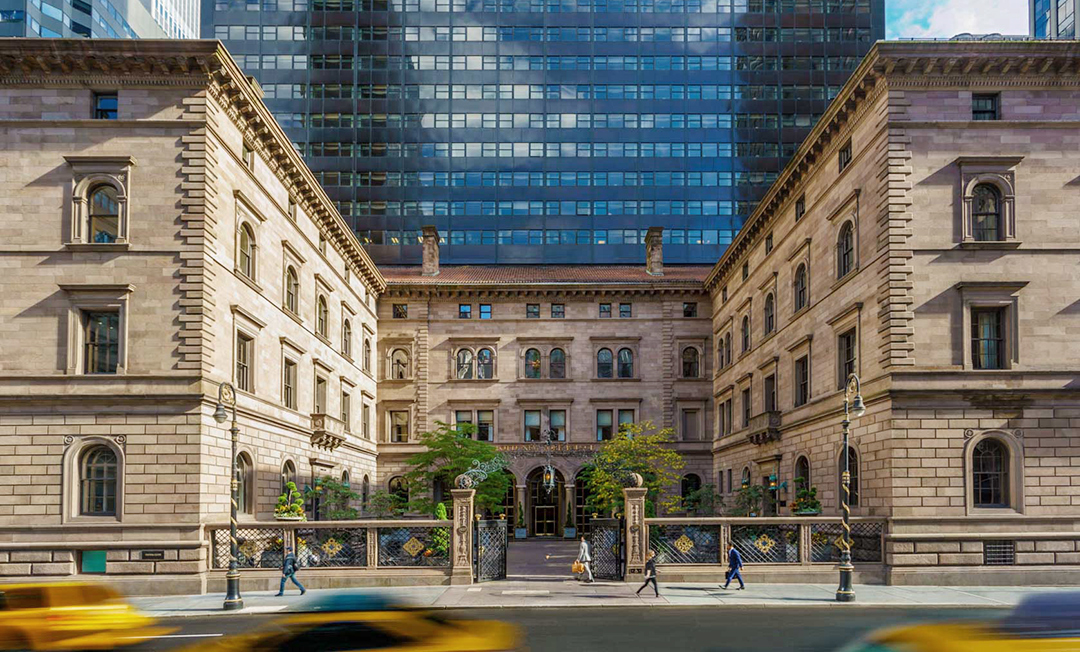 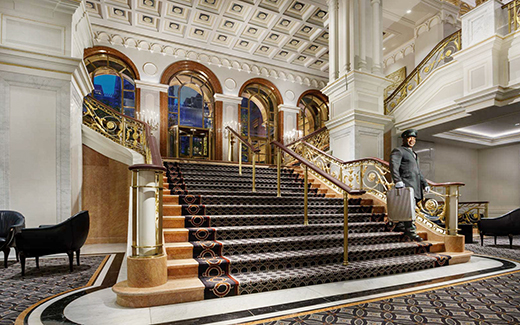 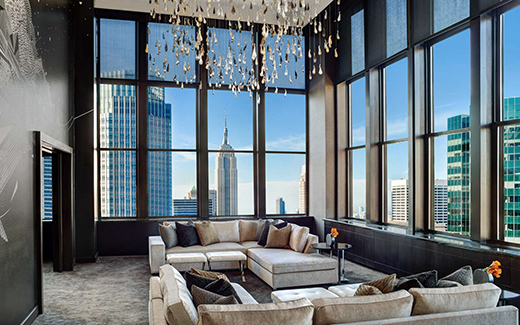 Where to Stay in New York: LOTTE NEW YORK PALACE
LOTTE NEW YORK PALACE is housed in the late-19th century mansion built by the financier Henry Villard, while also featuring a 55-story modern tower. Having appeared in the popular U.S. TV show <Gossip Girl> and several other films, the hotel has become a must-stop destination in New York. It has 909 rooms, plus a beautiful courtyard inspired by the 15th century Italian cathedral, restaurant Villard, luxury salon Rarities and cocktail bar Trouble’s Trust.