Ordinary Days in Art by Qwaya
We visited up-and-coming Korean artist Qwaya in his studio. Surrounded by his works, Qwaya looks very much like the figures in his paintings.
Most artists are good observers. Writers use their own languages to verbalize the experiences they want to share, while artists use painting tools and their own technique to re-create a person, scenery, or phenomenon. The key points are to ‘observe’ and ‘re-create.’ A careful observation followed by a proper re-creation makes a valuable work of art. 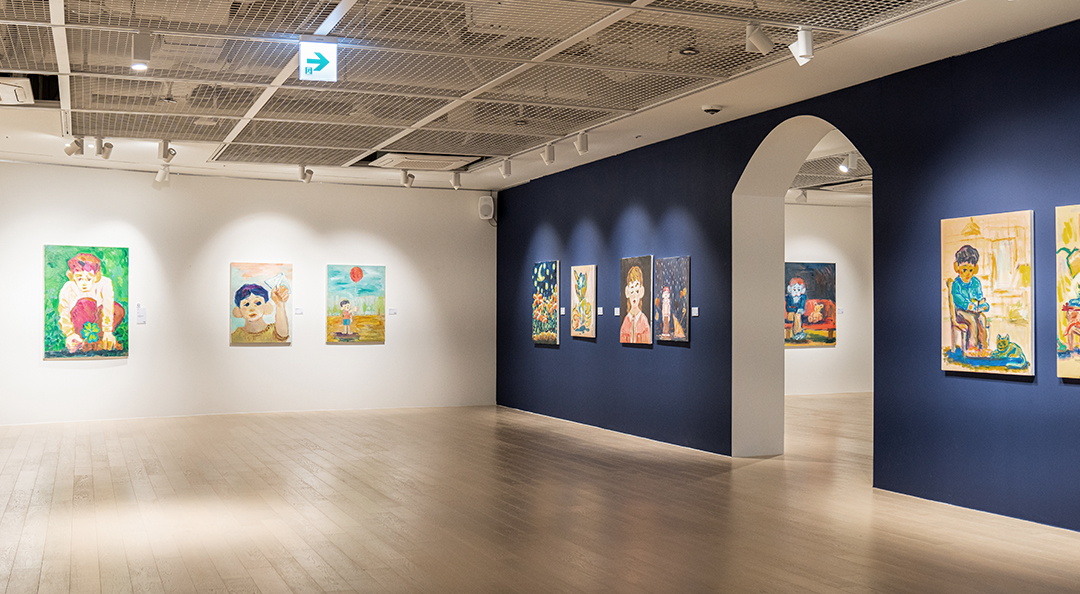 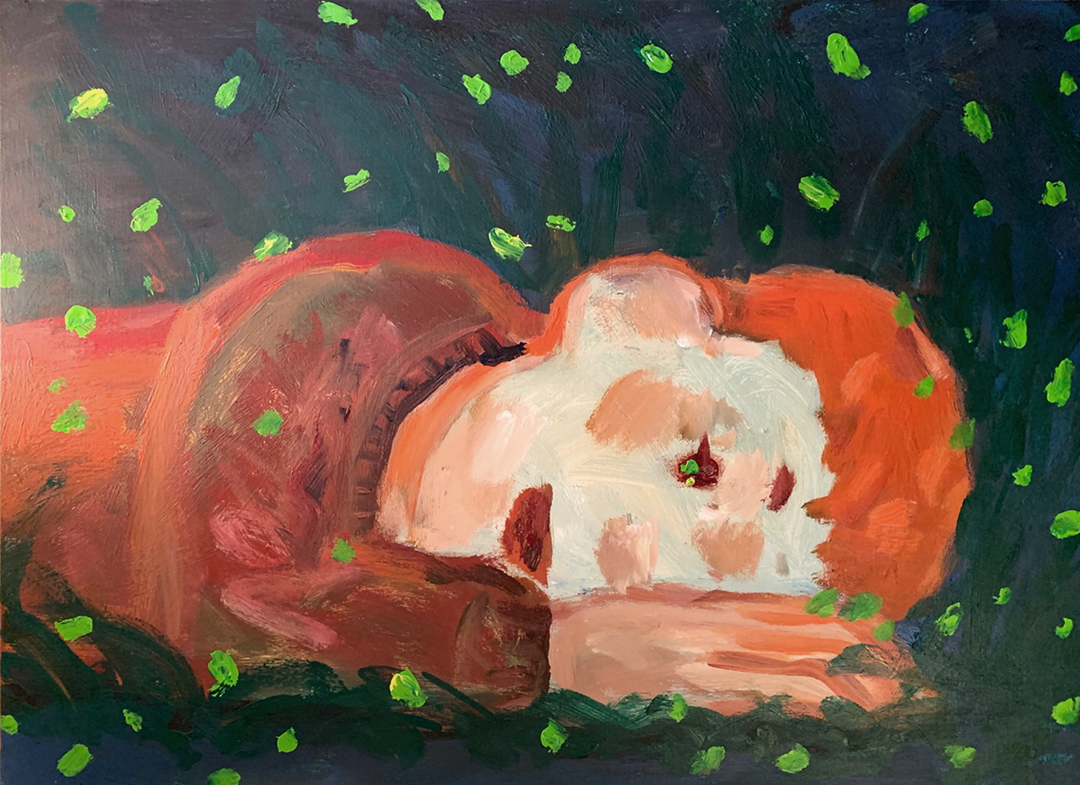 Qwaya’s paintings have been in the spotlight for the past few years, and I got to see his work for the first time two years ago. It was through an auction series titled ‘Zero Base’ hosted by a leading art auction house in Korea. Receiving a certain level of attention at an auction means that the art will sell well. It indicates the art will be competent in the market. People will not stop at just liking his work. They will want to keep it with them.
Qwaya usually paints people. To be exact he paints their daily life and faces. According to the artist, it is an ordinary day without anything special. But the figure in the painting has a facial expression that is hard to decipher and seems to be of age which is hard to guess. Faces are dark, but bright colors are added with coarse-yet-careful strokes onto the canvas. 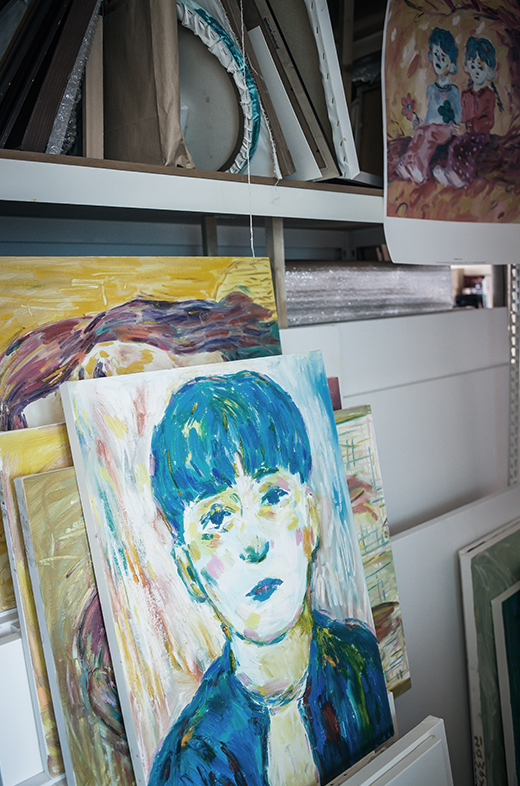 Works of art inside the studio 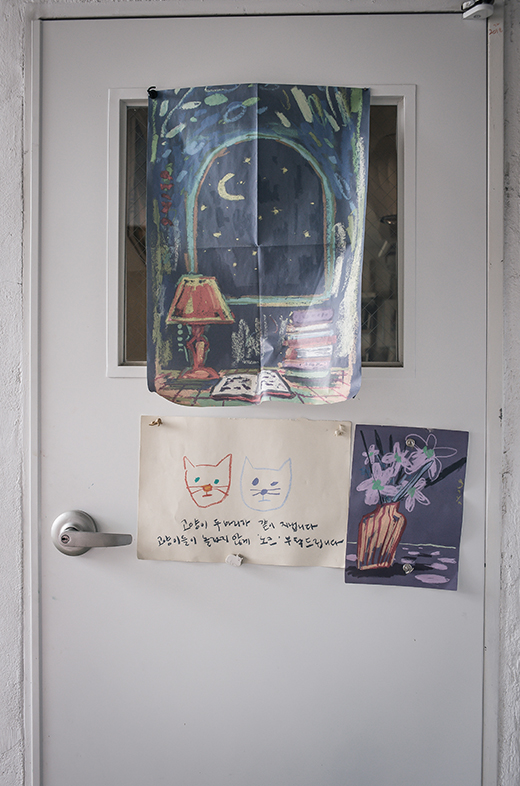 Entrance to the studio

Everyday Life Like Sangsu-dong Days
His studio is in Sangsu-dong. There are studios, cafes, and small shops run by artists all over Sangsu’s residential area. Qwaya is using the second floor of a building as his studio. In front of the door is a painting of a man serving as a sign indicating that you have reached artist Qwaya’s studio. After a flight of stairs, there is another entrance, a poster of his art, and a small notice.
“Two cats are living here. Please ‘knock’ so that they won’t be disturbed.”
There are indeed two cats in his studio. One gives a cautious stare examining the stranger, and the other freely approaches me. He seems to be the one appearing frequently in Qwaya’s interview photos or films. 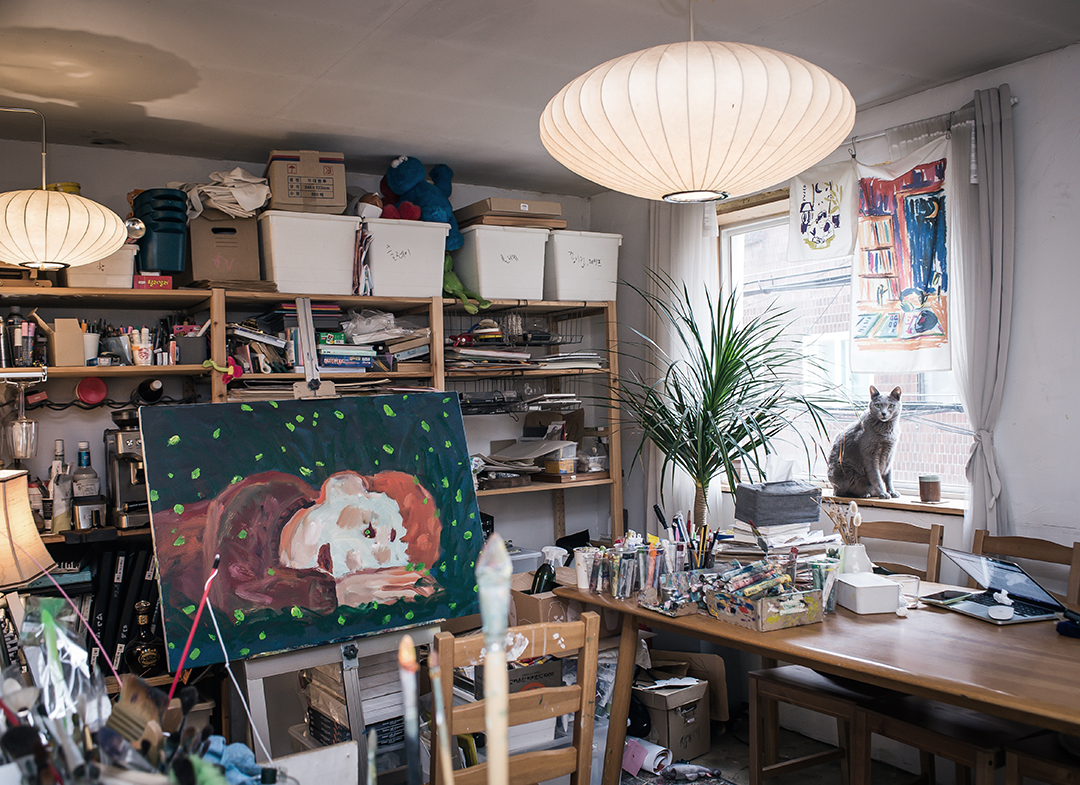 Qwaya’s studio. It resembles his works.

Ordinary Artist
Q. You’re using the stage name ‘Qwaya.’ What does it mean?
A. It’s a combination of the expression ‘gwaya,’ which means ‘to pass the night’ or ‘at night’ in Korean, and Q from the word ‘Quest.’ The reason I’m using the stage name is because I wanted to separate myself from my identity as an artist. My name was given to me by my parents. I wanted to make my own name to represent my work.

Q. Your artist career began about 5 years ago? You made your name faster than expected.
A. Yes. It’s been a short while. That actually gives me much to think about. I tend to keep my guard up lest people should overrate my talent. 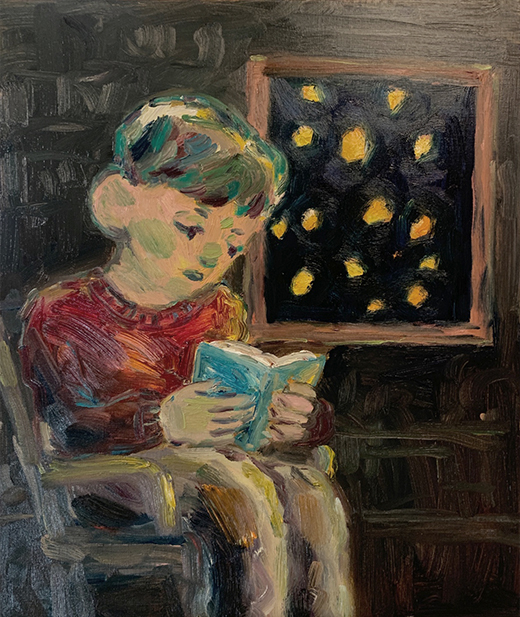 ‘Under the Night Sky’ 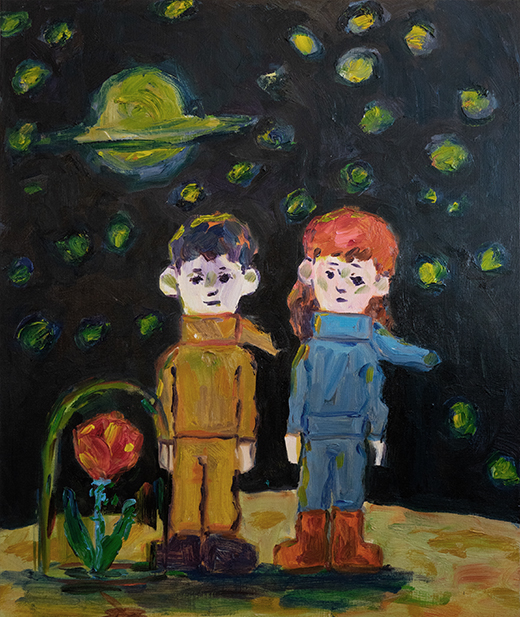 Studio, Seoul’s Sangsu-dong
Q. Why did you choose this place for your studio?
A. When I first came to Sangsu-dong, I liked the color of the neighborhood that I felt. It felt orange. It could have been the lighting in the street, but it surely felt warm. I thought it would be a comfortable place for me to work on my art.

Q. You’re one of the hottest artists in Seoul Auction’s Zero Base auction. Getting artistically positive evaluation and getting public approval are different. Why do you think Qwaya is popular?
A. Probably because my work isn’t that complex. The stories I try to convey through my paintings are easy and ordinary. I think my paintings have an advantage in their easily consumable nature.

Q. What do you mean by ‘easily consumable’?
A. That people find my work approachable and comfortable.

Q. Do you intend to create such work?
A. It’s not intended but I think that because my stories are ordinary, they don’t come out too difficult to understand. But I feel like I need to make new attempts with more diverse approaches. 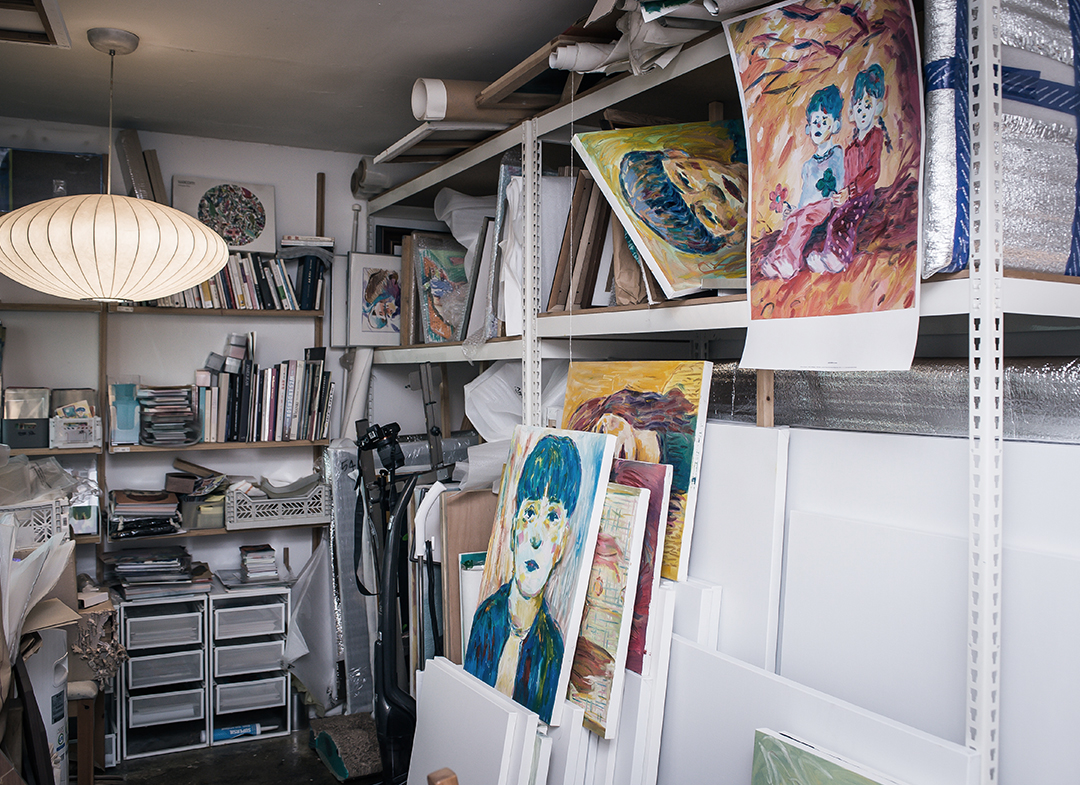 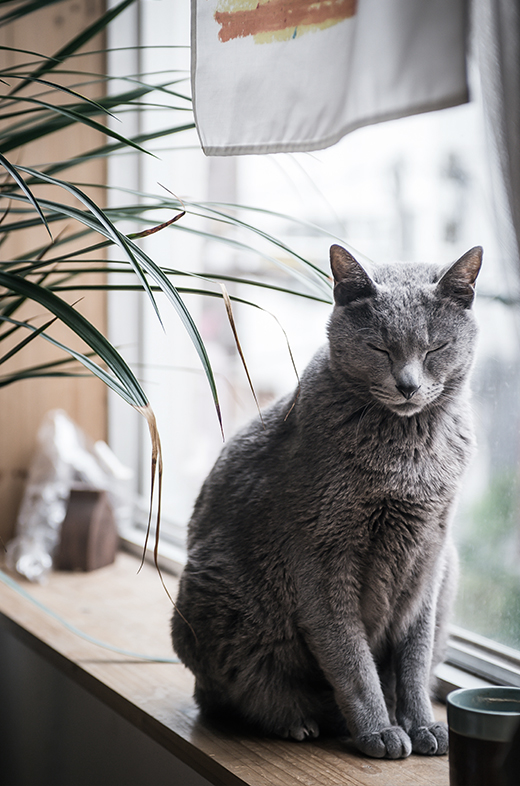 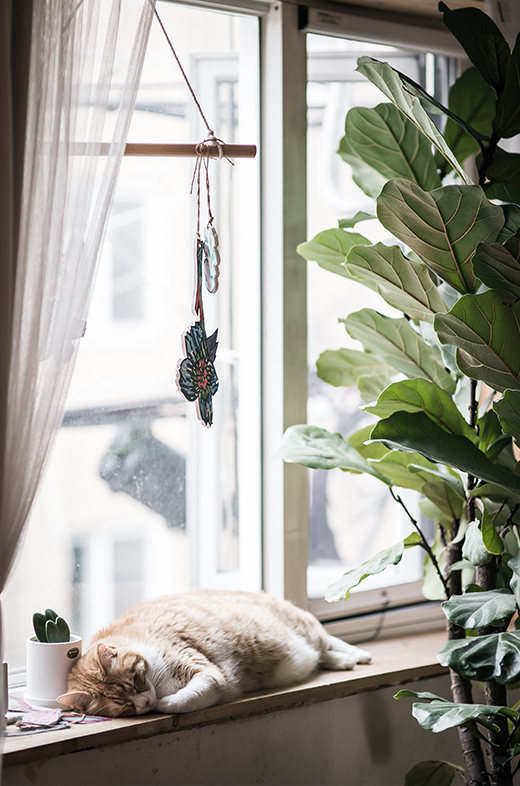 Cats are members of Qwaya’s family and also blend into the backdrop of the studio.

Q. Where did you first release your work to the public?
A. At first, I posted it on social media. I think that’s how you build your portfolio. After my works were made public, it somehow led to an exhibition. My first offline exhibition was not at a gallery, but a culture-complex type of space that was often used by artists of my generation.

Q. You’re best known to the public for your involvement in the making of an album cover for popular indie band Jannabi.
A. I received their proposal about 2 years after I started painting professionally. Previously, I had thought I should politely turn down such a proposal, if I ever receive any, while watching performances of artists I liked.

Q. What made you think that?
A. I’m a huge fan of Jannabi. I thought blending my work with my favorite artist’s project could result in situations where either I have regrets about the collaboration as a fan, or I become a nuisance to their work. But when I actually got their call, I could only think of how I’m going to focus on making a good cover for them. 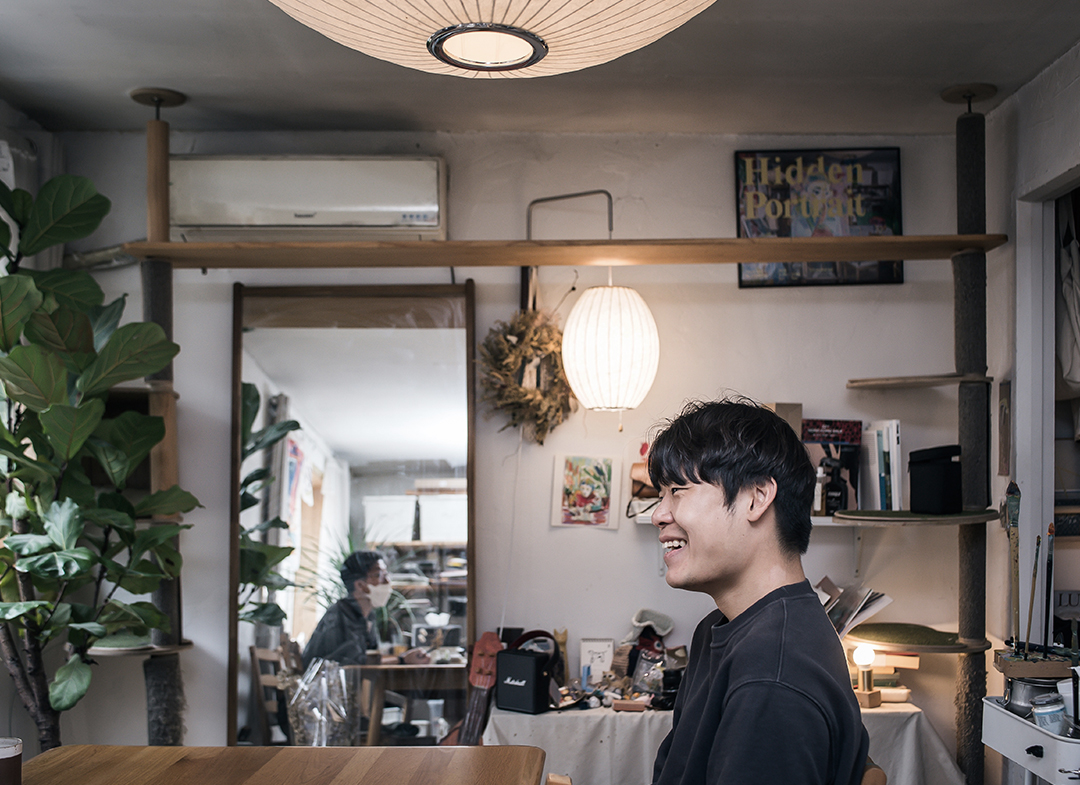 Man Who Paints Everyday Like Prose
Q. Your works have peculiar names that draw attention. Like a subheading of a novel or an essay.
A. Giving a name to my work is a very important step to me. Without having to explain the work, I would express my intention in the title so that people can read the title and understand the painting.

Q. What material do you usually use?
A. I tried to incorporate various materials but I mostly use oil sticks. Also known as ‘oil bars,’ they create oil painting-like texture. Oil sticks work like crayons.

Q. I thought focusing on a figure in creating a painting, especially if the face is central, was not done too often because it is challenging.
A. I think my works involve human figures because I have been influenced by my relationships a lot. No particular reason other than that. 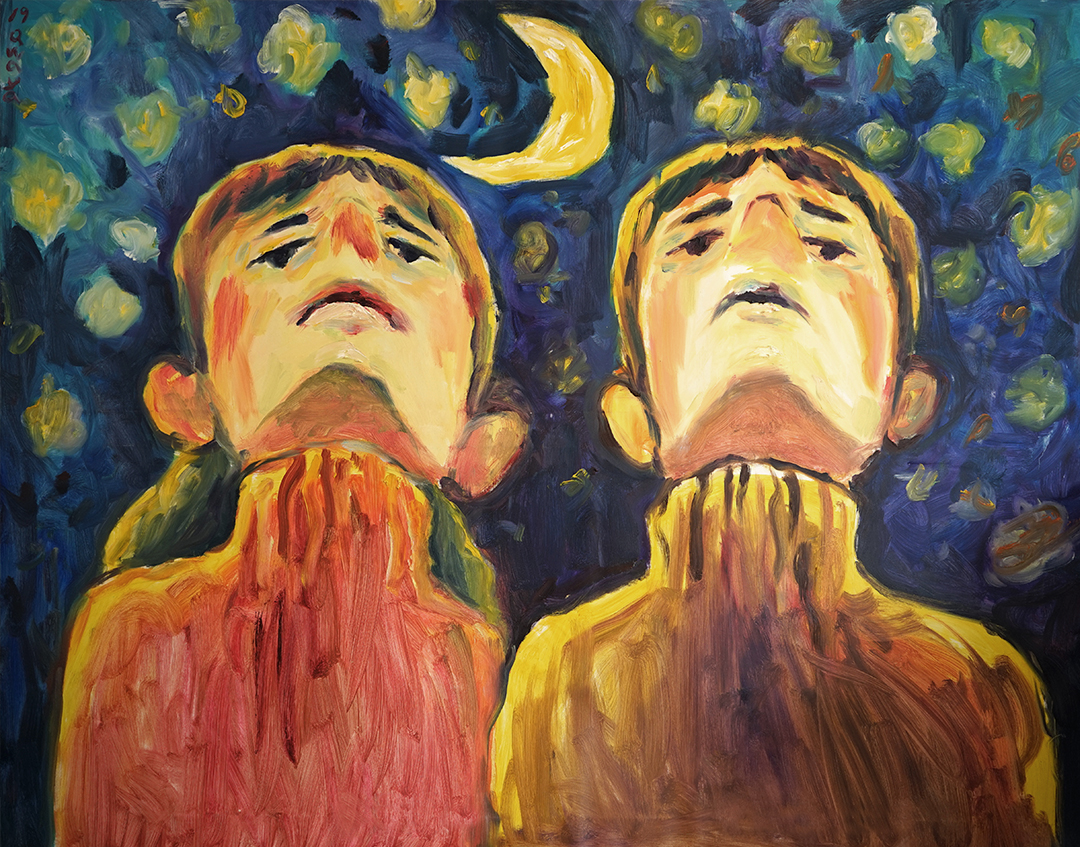 ‘Us, Like Stars and the Moon in the Night Sky’’

Q. They appear largely indifferent and bored.
A. I thought about what the most natural expression will be on a human face, and realized the most relaxed look can be found on a face when there are no emotions to be felt. If you force a smile or try to make a certain expression, it would be unnatural. I personally don’t have big emotional fluctuations, so that indifferent look is what I’m familiar with. Even from the viewer’s perspective, the no-expression face would serve as a blank page in terms of understanding the art.

Q. You’ve done illustration for a poetry transcription book titled <If We Were To Write Poetry for the First Time, It Would Be Surely Yun Dong-Ju.>.
A. I liked that the stories told in the book seemed to have a similar texture to my work. I also liked the idea of having my work connected to poetry.

Q. You’ve released an art book titled <The Poster Book>. Each page can be easily separated from the book and used as a poster. As an artist, do you think your works are being easily consumed?
A. I would like to share and talk about my work with many people. If the price of my work goes up, there will be fewer chances to do that. So I thought it would be nice to have more people access my work in the form of a poster. I have no regrets. 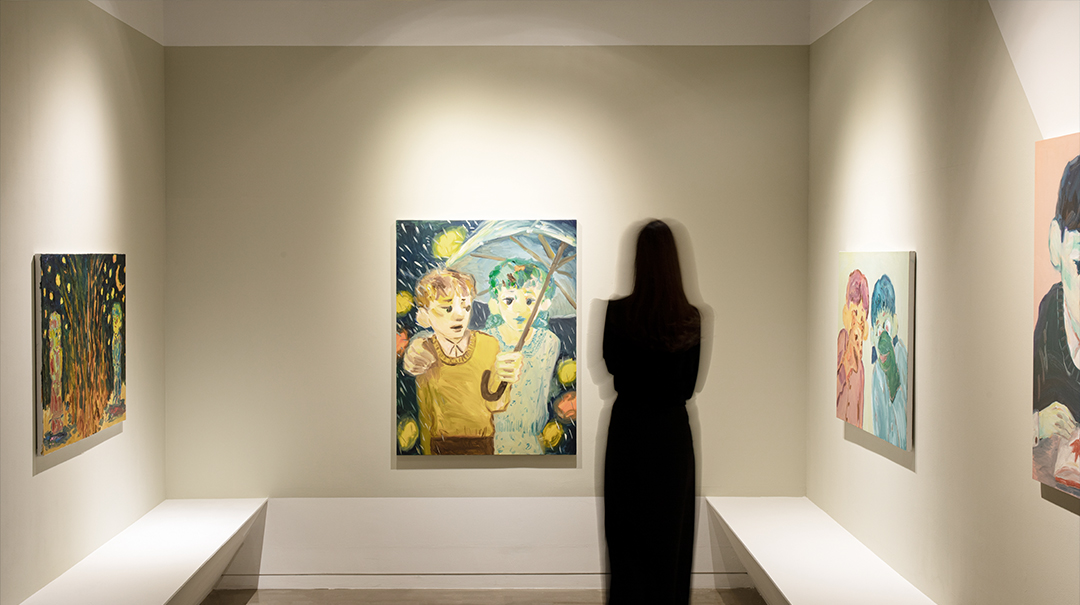 Exhibition <LOVE IS LOVE> at Soda Museum in Hwaseong

Ordinary Faces
Q. Looking at the figures in your paintings, it’s hard to guess their ages.
A. It’s not intentional. I just draw them thinking they are at their most honest age.

Q. One thing I’ve been curious about Qwaya’s work is the way you use your colors.
A. I don’t plan in advance, but have the oil bar case open next to me and choose whatever color comes to my mind at the moment. It’s improvised. I think it suits my style. So it is toward the end of painting that I could see how it will turn out.

Q. Do you have a work schedule?
A. It’s different everyday. I decide on what to do on that day. Like I’ll work on this today, I’ll get to work now. Hours vary all the time. 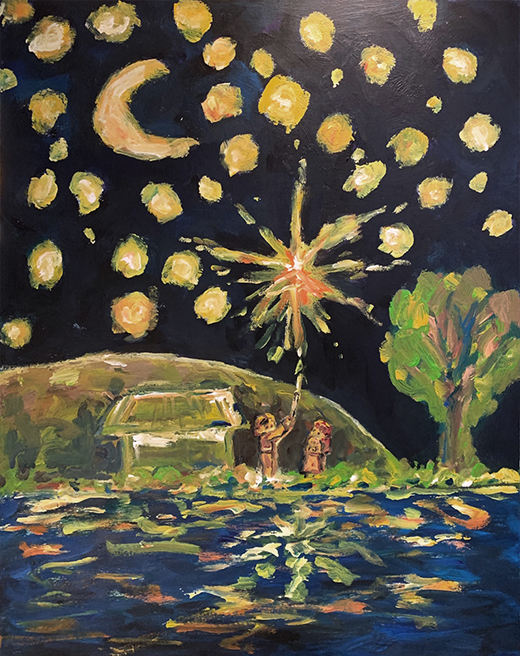 ‘Stars and the Moon and Fireworks’ 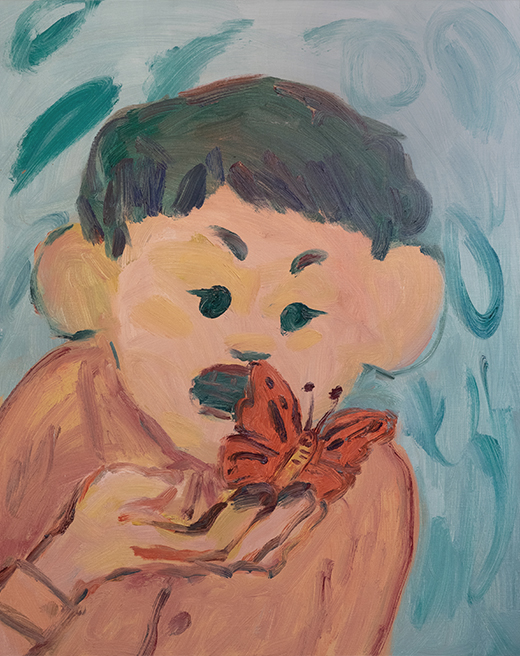 Q. What do you do first when you go on a trip?
A. Croquis. I always pack my work tools, and when I’m in a travel destination, I tend to document the place in my drawing.

Q. Do you have a city where you imagine yourself living and working in?
A. I used to dream about working in a place like New York. It’s a bit different from my style, but it’s colorful and it has everything you can ever ask for. Right now, I don’t have any specific city in mind. Rather, I wish I could have a bigger studio. I’m thinking of a large-scale project for the future.

Q. Is there a place you go frequently near your studio?
A. To me, Sangsu-dong has a strong workplace vibe. Because I usually stay in the studio, I choose to take a walk along the Han River instead of sitting in a cafe. From the studio, I can hear people passing by and having conversations. Those things can make me feel like I’m on a trip somewhere.