Art Pops Up at 8:21 PM
At the same time every evening in Seoul, London and Tokyo, among other metropolitans, digital media art pieces pop up and disappear. Let’s take a closer look at the fun moment when art seeps into life.
At 20:21, or 8:21 PM sharp, something strange happens on the large screen at K-pop Square inside COEX in Samseong-dong, Seoul. A digital media art, featuring the sun shining down on wide green plains, replaces fancy commercials and stays on for two and a half minutes. The piece is done by the world-renowned pop artist and stage director, David Hockney. The exact same piece played in Shinjuku in Tokyo and Piccadilly Circus in London, the same thing happened at a designated time.

CIRCA’s project being played on Piccadilly Circus in London © CIRCA

Hope Conveyed by Public Art
The COVID-19 pandemic has turned the world upside down. And what sort of change should art go through as we try to find our footing in the new normal ?
The London-born artist Josef O'Connor grew curious the role that art could play, with many parts of the world in a lockdown due to the COVID-19 outbreak. He established an art platform named ‘CIRCA’ and decided to seek answers through public art projects that help connect the world.
O’Connor had been thinking about sharing art in public spaces. When COVID-19 forced lockdowns, he began searching for more concrete solutions. He contacted Landsec, which runs Piccadilly Lights, the large digital billboard at Piccadilly Circus, for collaboration. He secured a small window of time each day to replace commercials with art works that Londoners can all enjoy.

Ai Weiwei was the first artist to be featured by CIRCA. © CIRCA

O’Connor needed artists who could provide works to grace the screen. Ai Weiwei, the great Chinese artist, was the first to come on the board. Ai produced a 60-minute film on his art career.
The video made its debut in October 2020. It started at exactly 20:20, or 8:20 PM.

More Artists Joining, 20:21 for Year 2021
More artists followed Ai to take part in CIRCA’s project. Each month featured a different artist. It was Cauleen Smith in November and Eddie Peake in December.
Once the calendar turned to 2021, the videos began at 20:21. Patti Smith, the rocker and poet, kicked things off for 2021. Tony Cokes, Emma Talbot and James Barnor went next. 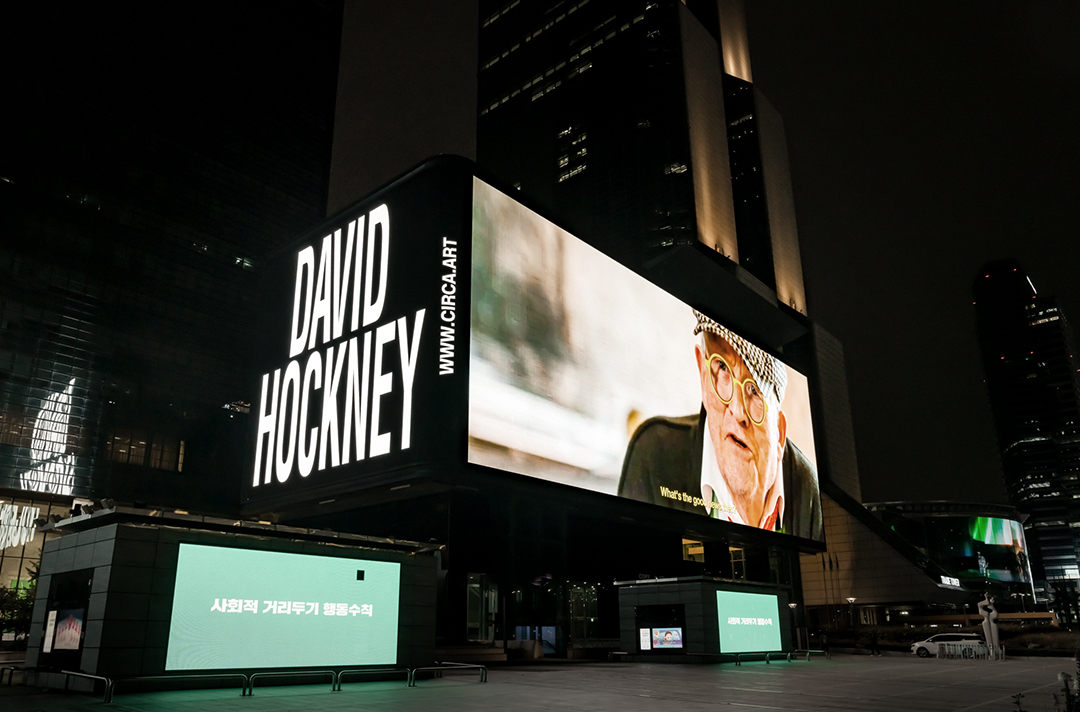 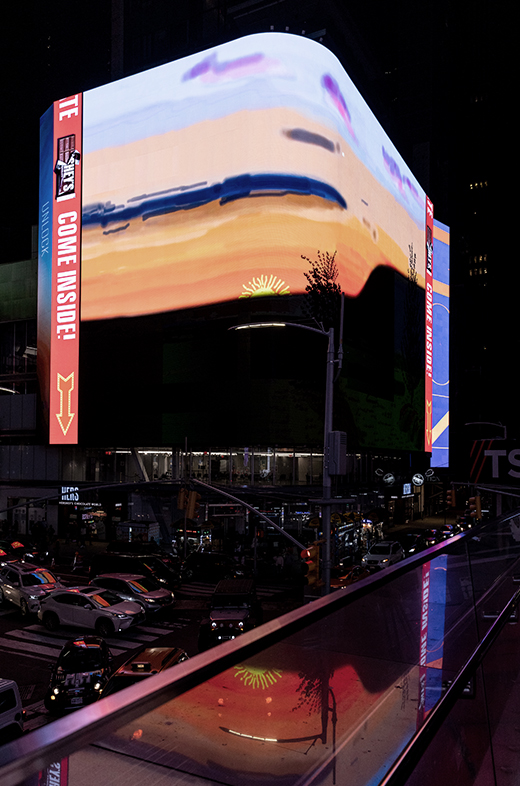 The piece by David Hockney, the featured artist for May, was also played in New York and Los Angeles. © CIRCA

The project reached its peak in May wth Hockney, one of the world’s most influential artists. Hockney’s presence inspired other cities around the world to join the project. Public art started making its way into our lives through lockdowns, just as the project intended. Hockney’s work, completed on his iPad, is titled, ‘Remember you cannot look at the sun or death for very long.’
In May alone, Seoul, New York, Los Angeles and Tokyo joined London. Dubbed ‘Sunrise,’ the piece has been hailed as the symbol representing hope and cooperation for many countries.
In a media interview, O’Connor said he spoke with Hockney for about a month starting at the end of 2020, and said how Hockney was pleased to be part of the project and share the message of hope as we move out of lockdowns.

Nikita Gale, SOME WEATHER_Blizzard 2 © CIRCA

Nikita Gale, SOME WEATHER_Fog 2 © CIRCA

Nikita Gale, SOME WEATHER_Heat 1 © CIRCA

Nikita Gale, SOME WEATHER_Rain 1 © CIRCA

Journey Must Go On
The project is currently ongoing at Piccadilly Lights in London, COEX K-Pop Square in Seoul, and Yunika Vision in Tokyo. ‘Some Weather,’ a new series by the LA-based Nikita Gale, was featured in June. <London Zeitgeist>, a group exhibition featuring works by Larry Achiampong, Alvaro Barrington, Matt Copson, the duo Rosie Hastings & Hannah Quinlan and Anne Imhof will rule July.
<London Zeitgeist> was organized by Sir Norman Rosenthal, the chief curator at the Royal Academy of Arts who has run such major shows as <YBA Saatchi Collection>.
Work by a Korean artist will grace the screens for August. Barakat Contemporary, which handles the Seoul screening of CIRCA, and Seoul Museum of Art are having talks on that front.
Meanwhile, the art journey that starts at 20:21 is still going on.