Craft Hub Connecting Art and Life, Seoul Museum of Craft Art
The Seoul Museum of Craft Art opened its doors to the public, giving them access to an extensive archive on the history of traditional handicraft in Korea and modern craft of today. Seoul has become that much fuller.
‘Art’ and ‘culture’ are titles sought after by many cities around the world. They not only draw the attention of travelers but act like an insurance policy that upgrades the city’s brand. That’s why cities often have memorable nicknames involving their cultural assets in the areas of art, craft, and music, and use them for promotional purposes. The UNESCO Creative Cities Network also emphasizes that the cultural assets of a city and cultural industries based on creativity are key components of a 21st-century city. 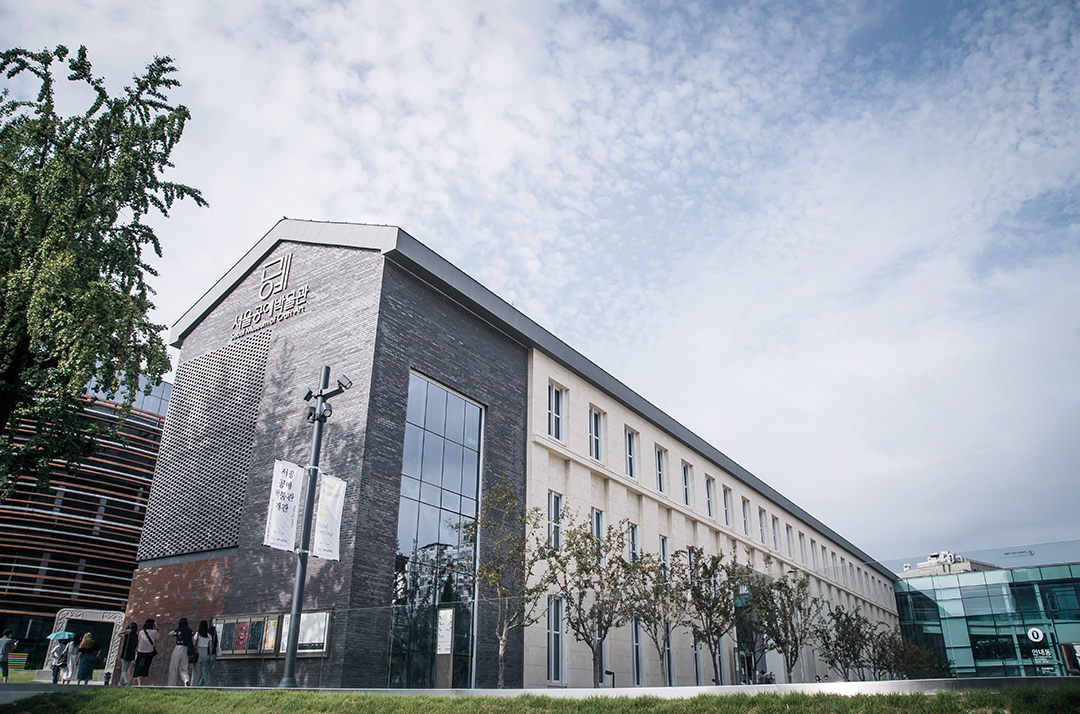 View of Exhibition Hall 1. Special and permanent exhibitions are on year-round.

Craft + Seoul
As a 21st-century metropolis, the city of Seoul is making an effort to reflect as many images as possible in the city brand, on top of the existing image of a high-tech city. The recently-opened Seoul Museum of Craft Art is one of the means to enhance Seoul’s brand value. Built on the site of Andong Byeolgung(Angukdong Byeolgung) in Anguk-dong, Jongno-gu, it is the first public craft museum to open in Korea.
The museum complex consisting of seven buildings was built on a 10,590㎡ lot, by remodelling the existing five buildings and constructing two additional structures including the museum information building and a hanok, which means a Korean traditional house.
The museum stands on a historic site. In the early Joseon Dynasty, King Sejong the Great built his son Yeongeung Daegun’s house there. Later the site housed Andong Byeolgung, a separate villa built by King Gojong in preparation for the marriage of Sunjong. For about 70 years before the construction of the museum, the land was occupied by Poongmoon Girls’ High School. 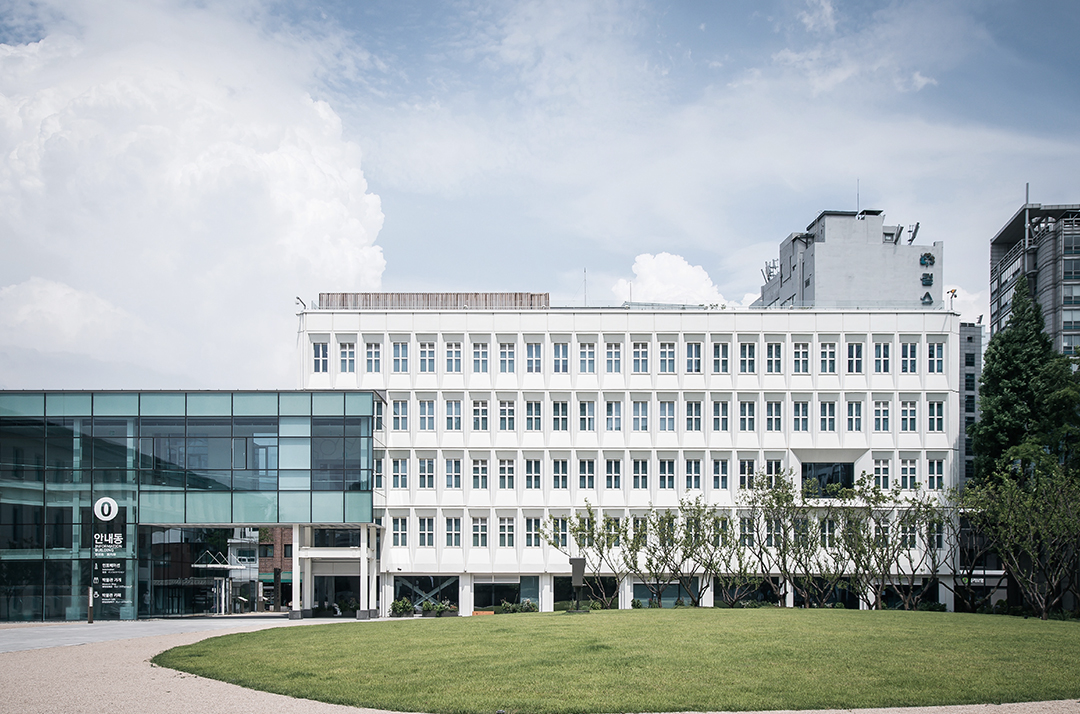 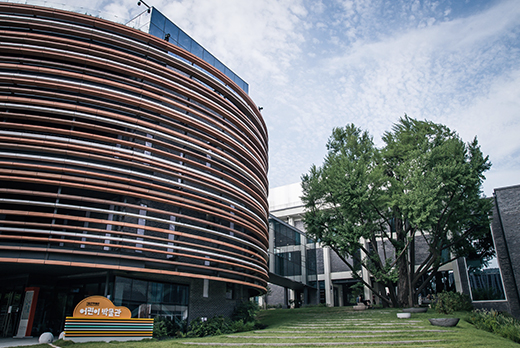 Education Hall, with Children’s Museum inside 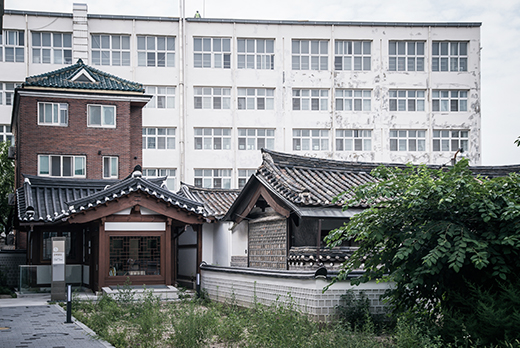 Seoul City’s decision to erect a public craft museum in this location for the revival of craft culture was partially based on the historical significance that this Jongno neighborhood has. The area, in fact, was where ‘Gyeonggongjang’ was. It refers to a government office in charge of managing craft masters of various fields who were tasked to make handicraft for the court. This means the museum site has long been the origin of Korean craft culture since the days when Seoul was called Hanseong.
As the first-ever public craft museum, the Seoul Museum of Craft Art not only offers exhibition spaces, but plays an extensive role. It also features the craft archive room, library, and children’s museum. The museum embodies the philosophy that a museum has to move away from the simple display of art; instead, there has to be a comprehensive archive on the craftworks and their making processes; and such data should be readily available to the public rather than being used exclusively for research purposes. 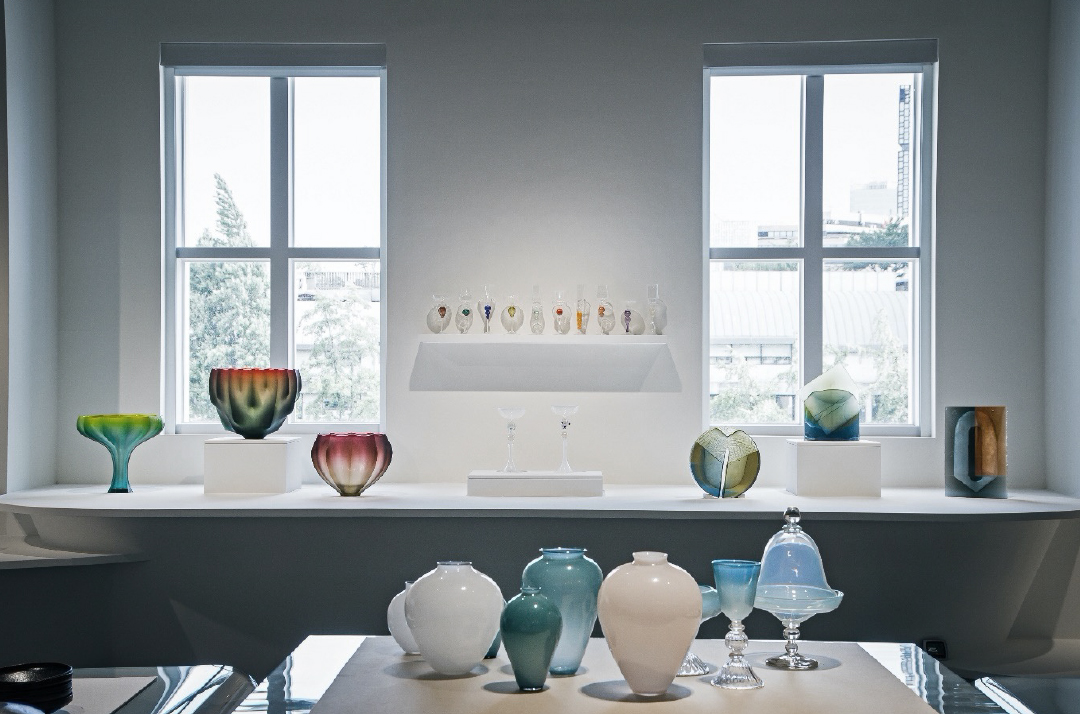 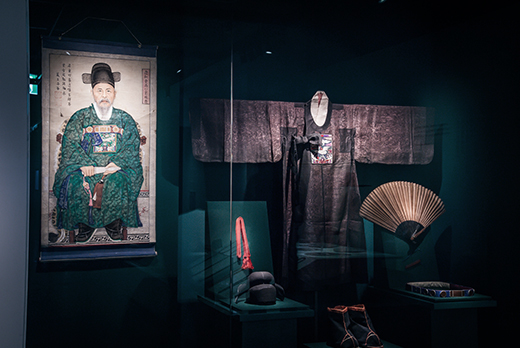 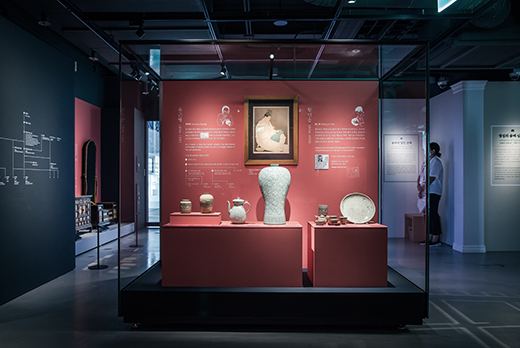 Everything About Korean Craft
Neither the amount of craftwork the museum has collected for exhibition purposes nor the overall time it took should be taken lightly. From an embroidered folding screen made in the late Goryeo period to a 21st-century Buncheong-ware, the museum presents about 20,000 pieces of craft, records, and literary archives in one place.
The Seoul Museum of Craft Art has largely two types of exhibitions — permanent and special. The permanent exhibition is divided into the overview on the history of Korean craft and the display of Museum of Korean Embroidery collections. Currently, the museum’s inaugural exhibitions include: on the history of Korean craft; and featuring textile artworks from the Huh Donghwa & Park Youngsook collections of the Museum of Korean Embroidery. Particularly, <Artisans Making the Better World> offers an insight into the changing times of the late Joseon Dynasty through historical data showing how the center of craftwork shifted from the royal court to the private sector. 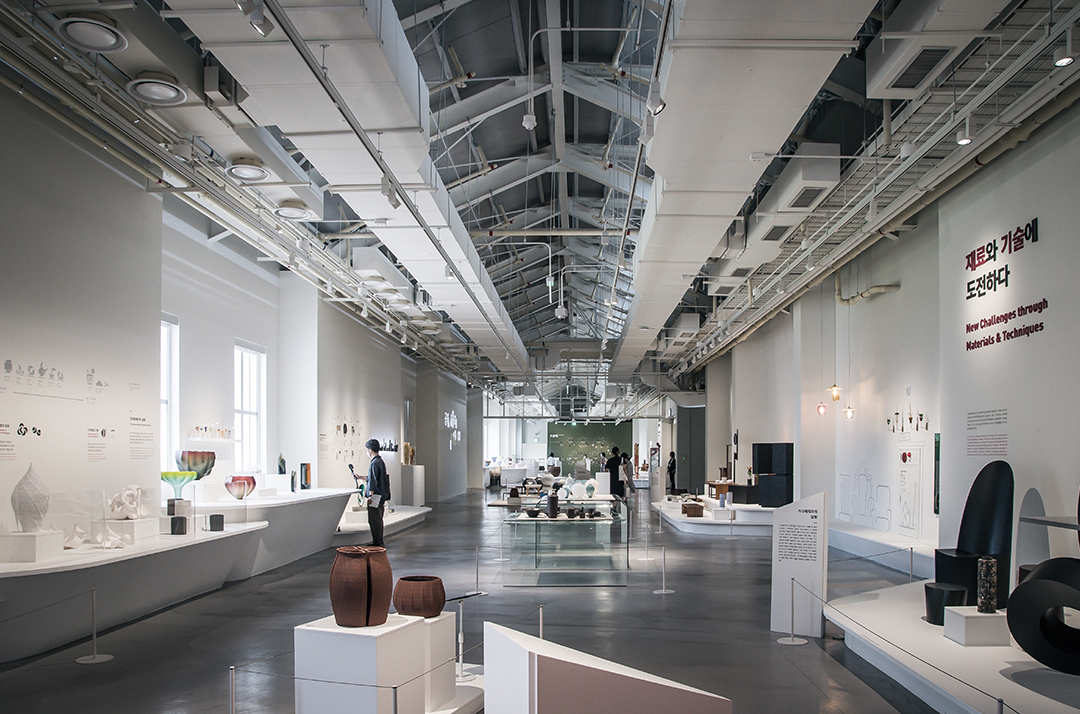 The first segment of the special exhibition features pottery, woodwork and glasswork. 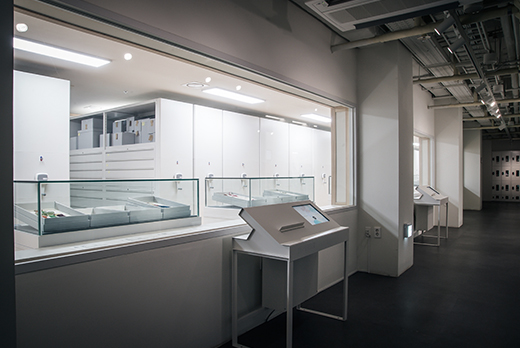 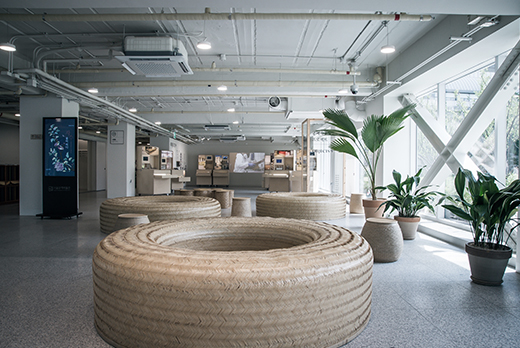 As part of the special inaugural exhibitions are <Heritage of Seoul’s Traditional Crafts> and <Earrings, Connecting the Past and Present>, dealing with the history of earrings in Korea and featuring Seoul Intangible Heritage works. Instead of a chronological introduction of craft art, <Craft, Moving Beyond Time and Boundaries> offers a chance to look at how handicrafts have adapted to the changing times by understanding the materials, production methods, and characteristics of Korean craftwork throughout the period between post-liberation and today. 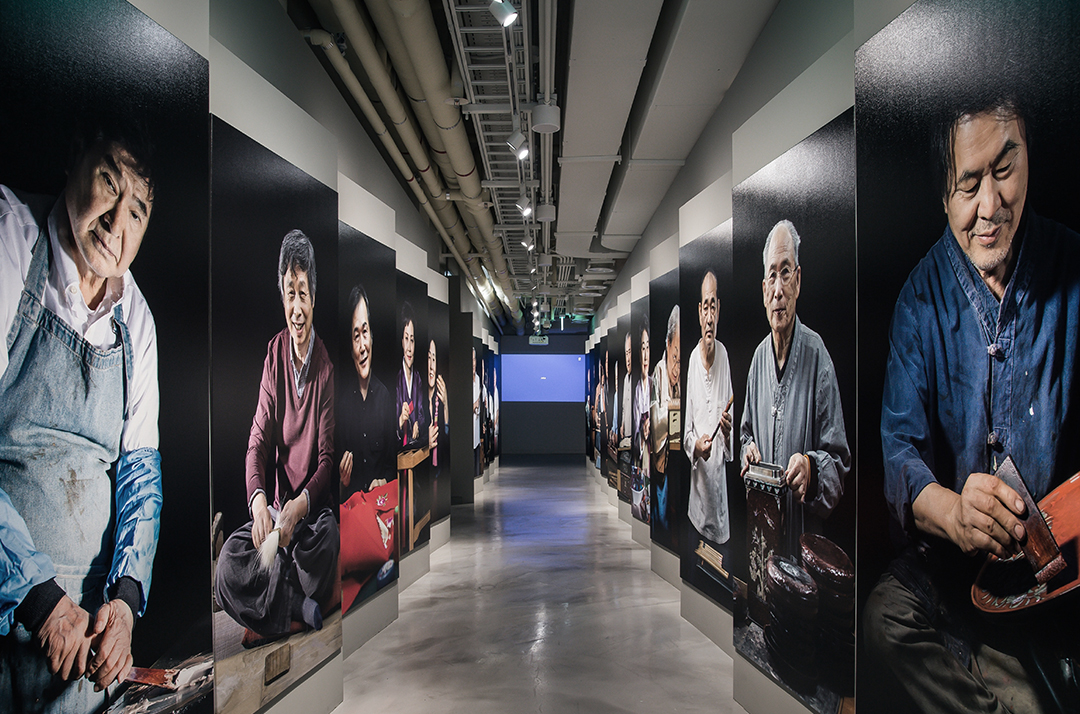 Photos of artisans taken by Koo Bon-chang fill the walls.

Major works by modern craftspeople are showcased in photos.

Additionally, <I’m from Korea> is strongly recommended. It is an exhibition of the records and documentation by folk culture scholar Ye Yong-hae who undertook a research into the Korean cultural properties that had been taken overseas. Ye is the young journalist who coined the term ‘intangible cultural asset’ in the late 1960s.
Although the Grand Opening has been postponed due to the Covid-19, the museum accepts online booking for pre-opening exhibitions. Up to 90 visitors are admitted per session six days a week. Currently the museum is drawing a lot of interest and is fully booked till after two weeks. 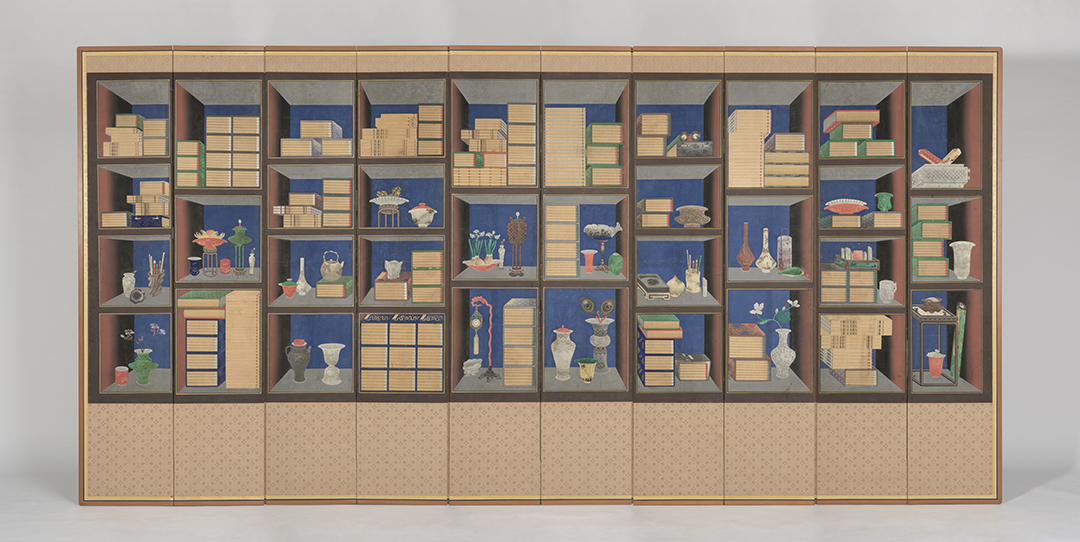 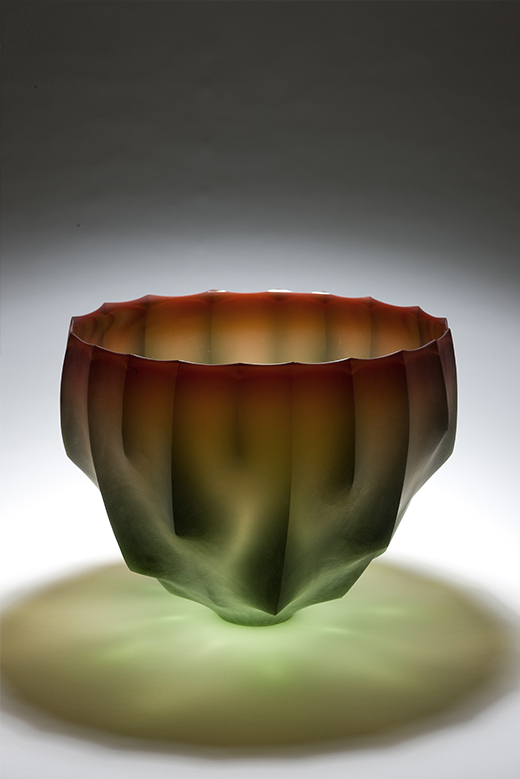 'Tears in the Sunset' by Kim Jun-yong 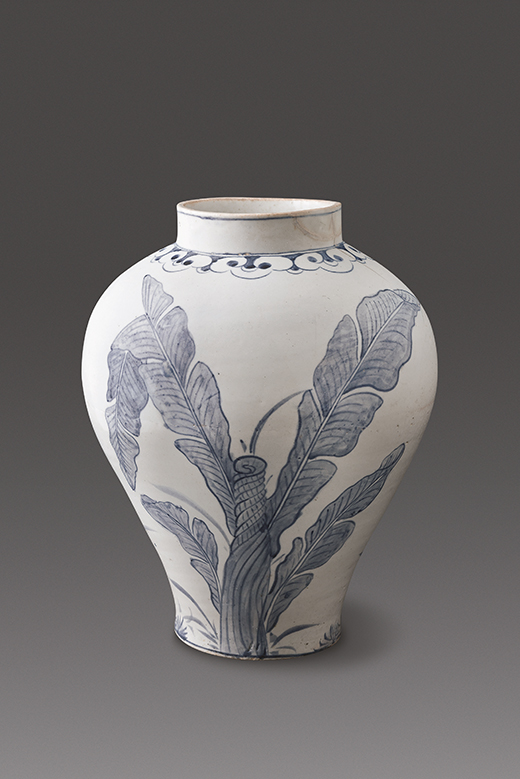