Dutch Illustrator Coen Pohl Has Korea Figured Out
We had an interview with Dutch artist Coen Pohl who seems to understand Korean culture even better than Koreans. His stories were marked with good memories of Korea and inquisitive spirits.
A tambourine and a microphone are scattered on a karaoke table, next to a toppled can of drink spilling liquid. A bottle cap of soju with a curved strip of metal sits on a red table, which hints at the background being a tented street stall, called pojangmacha in Korean. A pair of chopsticks are neatly placed on a pajeon(green onion pancake) plate next to a nickel-silver kettle containing Korean rice wine makgeolli.
These detailed depictions of Korean night scenes are not produced by a Korean artist. Having found joy and inspiration in Korea, illustrator Coen Pohl turned those memories into sophisticated paintings which became a sensation. He currently lives in his hometown Amsterdam.
The interview was conducted via email. His correspondence, recounting various fun memories he had made in Korea, seems to indicate he is still fond of Korea. 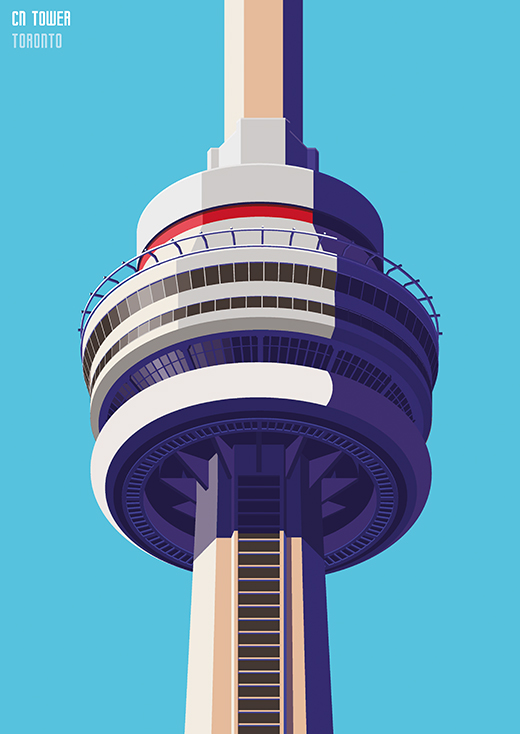 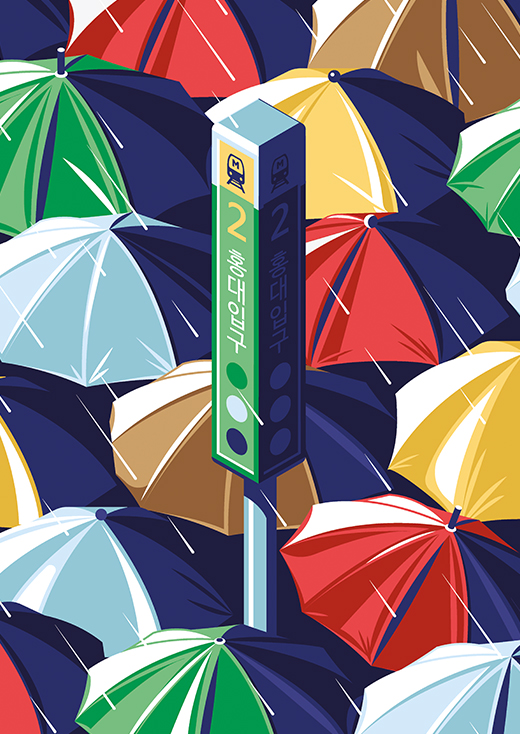 Q. When was the first time you visited Korea? Do you remember the first scene of Korea from that first trip?
A. My first trip to Korea was in 2014. At the time I stayed in a hostel in Hongdae so my first memory is walking around the streets of Hongdae. I was very surprised by the amount of cafes and restaurants, and the number of people walking in the streets. Later I visited the fish market in Seoul, where we ate fresh fish. It was very interesting to see all the fish and other sea animals that I didn’t know anything about.

Q. What was the most intriguing cultural aspect or scene you saw in Seoul?
A. During the first trip we walked on the street in the city center and was surprised by all the amazing colorful lanterns at the temples. I then learned that it was Buddha’s Birthday (Bucheonim osin nal). During this evening I came across a parade where many different statues were shown. Often with beautiful lights. There was also a huge concert on the street where thousands of people were dancing. Unfortunately, I can't remember which artist was singing. This was a fantastic experience. 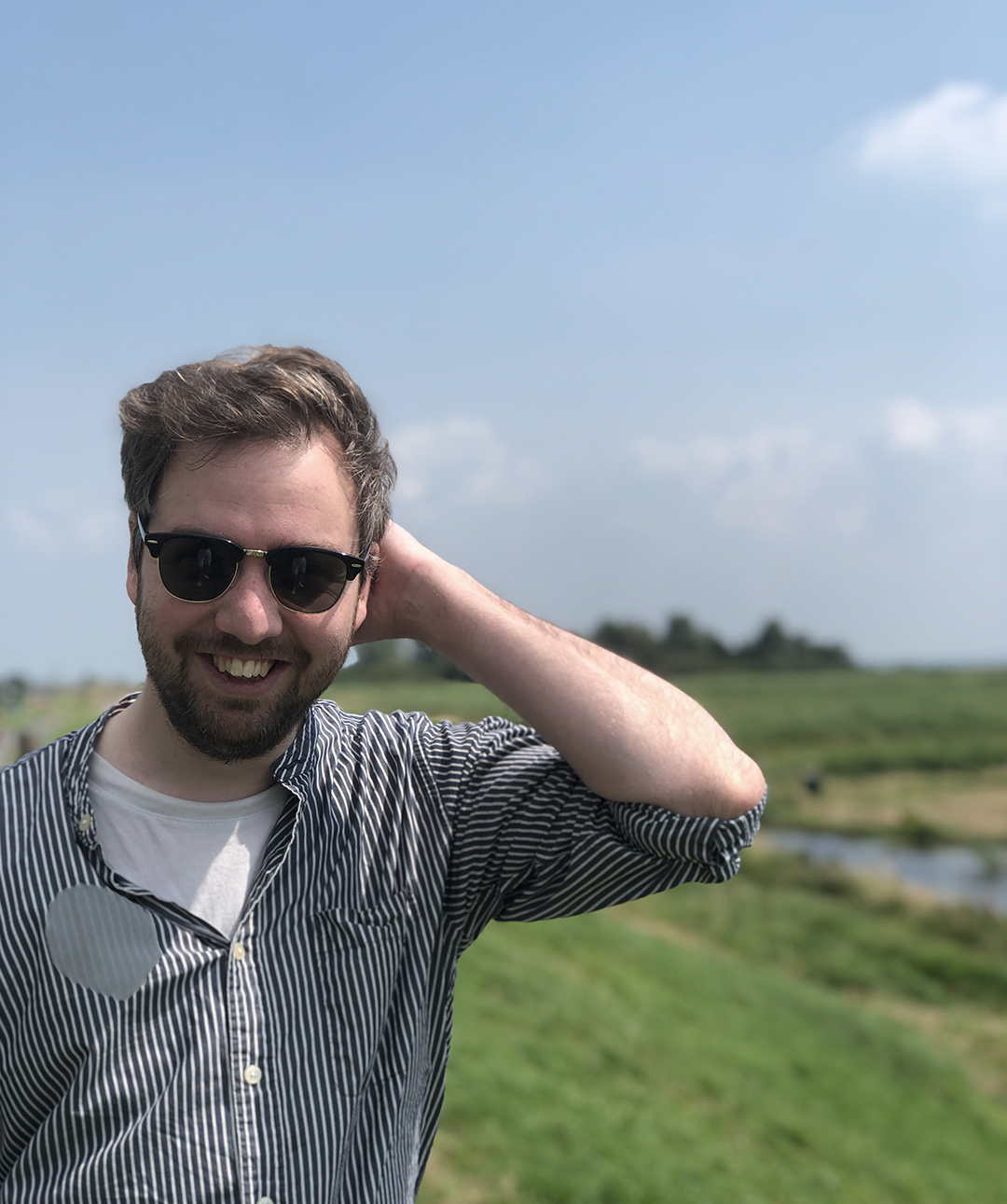 Q. How many times have you visited Korea?
A. I have visited Korea so many times I don’t remember the exact amount of times I entered the country. Sometimes I travel to Japan or Hong Kong, and then go back to Korea again. I also stayed on a Working Holiday visa for 1 year.

Q. How long do you stay in Korea on average?
A. My average period of stay is around 2 to 3 months every time. Because this is too long to stay in a hotel (too expensive) I often search for a local room or long-stay guest house where you can pay monthly. After making friends in Korea, I also stay at their places sometimes.

Q. Do you have a must-visit shop or place that you like?
A. I had many favourite cafes in Hongdae and Hapjeong, but most of them were already gone when I visited the last time in 2019. One thing I noticed in Seoul is how fast things change so it’s hard to keep one favorite place. However I also enjoy just walking around the older parts of Seoul, like Bukchon Hanok Village and walking along the Cheonggyecheon. When I came to Korea later, I also brought my inline skates, so I could skate along the cycling lane of the Han river. This was a nice way to explore new places, and sometimes talk with elderly people sitting along the river. 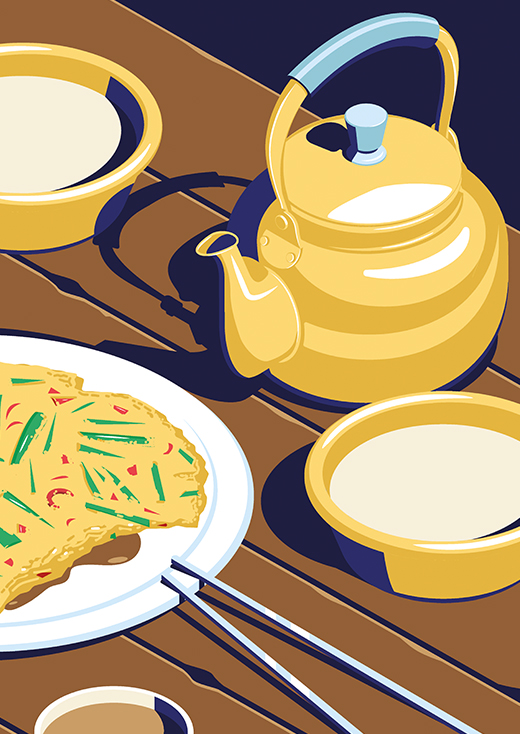 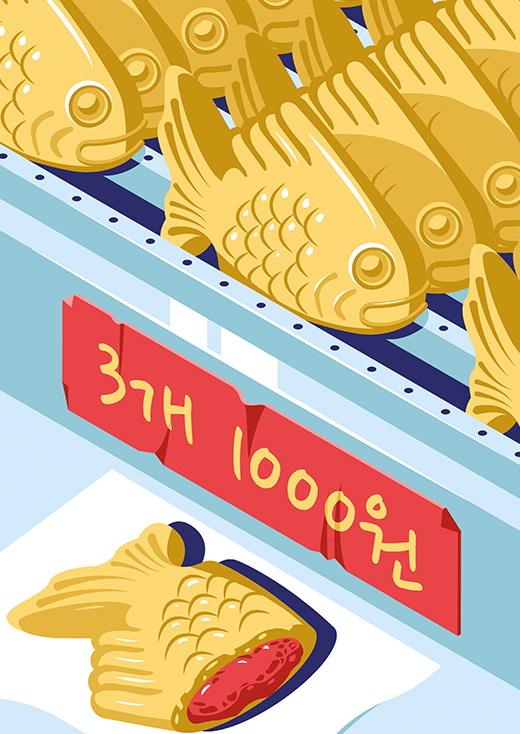 Q. People who visit Korea ordinarily like to see with their own eyes the exotic Asian culture at historic sites such as Gyeongbokgung Palace or temples. But you chose to look at markets. We want to know what made you draw the daily life of Koreans that includes markets, soju, mandu(dumpling), and tteokbokki.
A. The first reason is that I wanted to draw something more local and unique. Everyone already knows about the temples and famous landmarks from the tourist guides, and you can already find many drawings of these places. So I wanted to draw something more unusual. At the time I was also experimenting with drawing small scenes, such as the dumplings, so I could focus just on the detail. To draw landmarks like the temples and palaces, you have to ‘zoom out’ more and draw the whole scene. So the little details get lost easily.

Q. You wrote on your website, “I’m based in Amsterdam but you will find me often in Seoul as well to get inspiration.” What kind of inspiration does Seoul give to you?
A. For me, Seoul (and the rest of Korea) was so different from where I grew up (Amsterdam). Even though Amsterdam is the biggest city in The Netherlands, it is still very small compared to cities like Seoul. So on one hand I was very fascinated by the size of Seoul. There are so many neighbourhoods and interesting streets that it’s impossible to visit every place in a lifetime.
On the other hand I get inspired by the little things, like the street food stalls everywhere and all the neon signs on the buildings. While Amsterdam is a great city, it’s also more regulated, I think, which can make it a bit less interesting to explore for me. Of course, because I grew up in Amsterdam I’m also very used to everything. 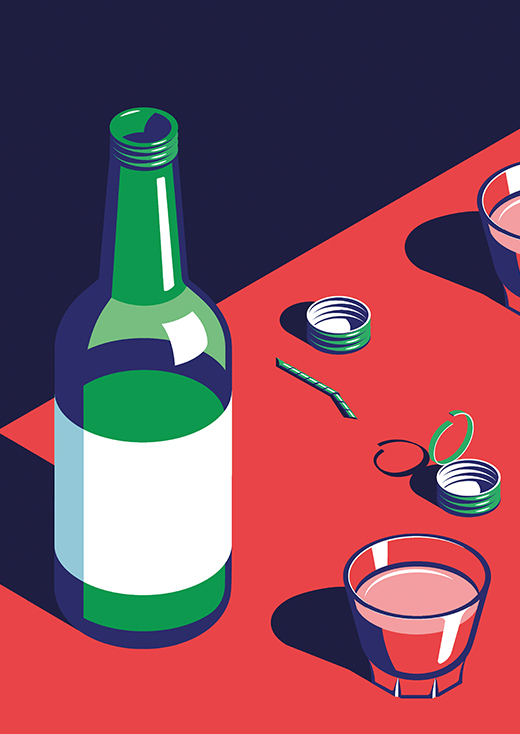 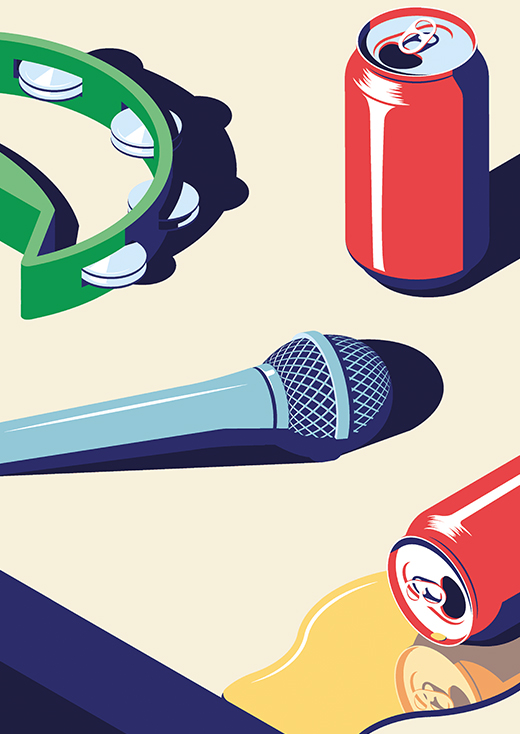 Q. Your illustrations reveal traits of Koreans or scenes unique to Korea. For example, the bottle cap of soju with a coiled metal tip or a can(or bottle) of beer placed on its side next to a karaoke mic, you would think it’s something uniquely Korean that only they can recognize. How did you come to notice those scenes?
A. I think it’s pretty easy to come across those scenes in Korea, even as a foreigner. When I stayed in a guesthouse the first time I came to Seoul, other guests and even the staff were eager to introduce these aspects. For example there was a vending machine inside the guesthouse, where people could get Soju and the staff taught how to play the drinking games. Once you make some Korean friends, they are very eager to teach foreigners about this stuff.
Of course, there are many things you don’t ‘see’. Deeper cultural things that can only be seen if you are living in Korea longer, or have made friends with deep connections. One example of this is bowing in front of the parents or grandparents on New Year’s Day and receiving some money. I also visited my friend’s grandfather's grave, and placed some food offerings on it. This was a very interesting and impressive experience.

Q. Who introduced you to the night scene of Seoul with such a detailed perspective?
A. Not one person in particular. Instead I saw and experienced many things when I made friends in Korea. Together with them I went out at night a lot, and also went on various trips in Korea. Sometimes I came across an interesting scene that I remembered for later to draw.

Q. Are there other Korean cities that were impressive other than Seoul? Any cities you would also introduce to others?
A. I always recommend visiting Busan and Jeonju. Busan has amazing food and it has beaches, which I do miss in Seoul sometimes. And Jeonju has very nice old architecture (the hanok houses). 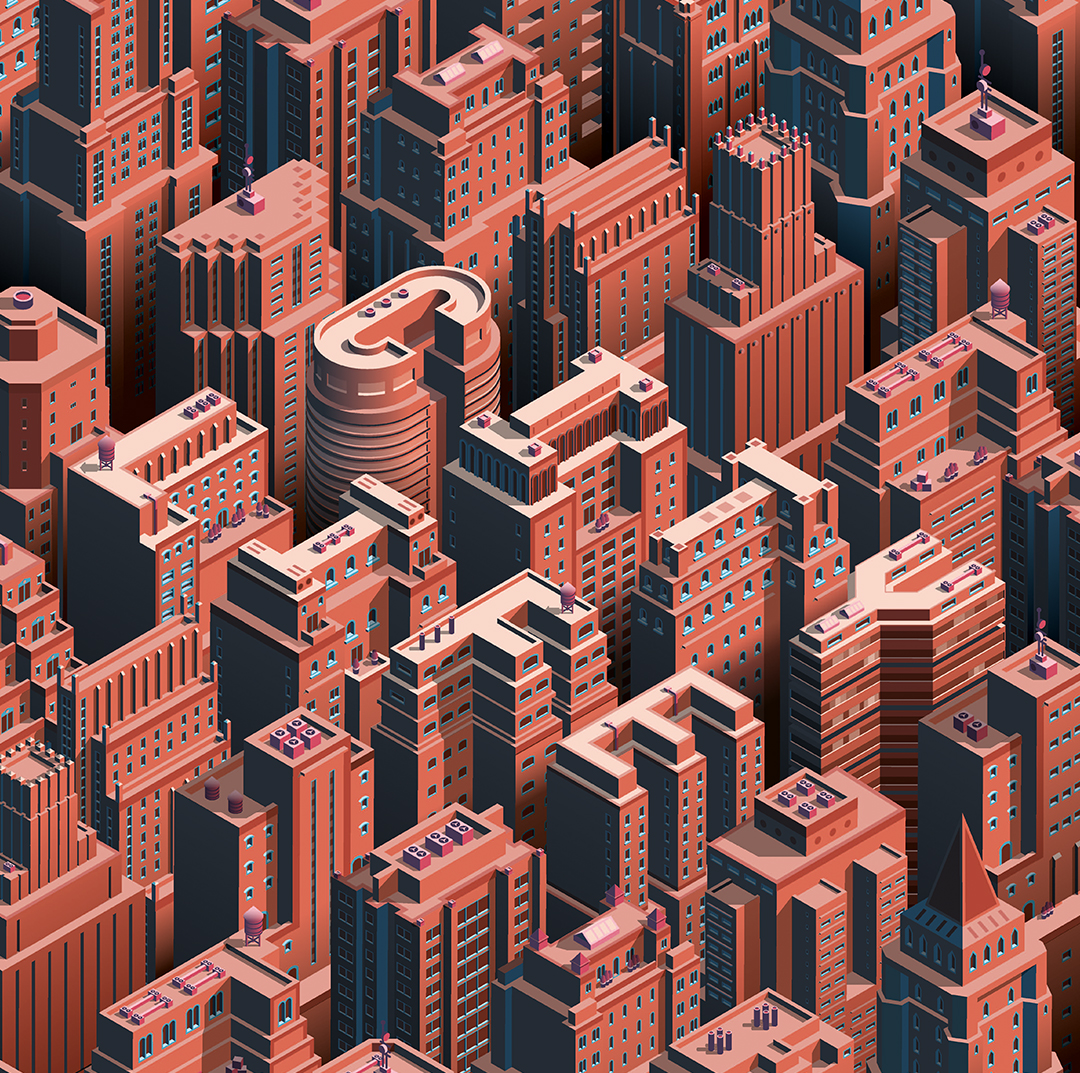 Q. Is there a reason your main theme for painting deals specifically with ordinary life in a city?
A. I think these scenes are the most interesting as they really remind me of my time in Korea. I started making these works as personal memories. However, many people who saw my work also really liked it. I got many requests from friends and other tourists to have my work as a poster. One time I sold my work on a flea market in Hongdae, and many Korean visitors also really liked it, so I decided to expand the series of ‘Night in Seoul’ more.

Q. What is the biggest difference between the Netherlands and Korea that you see?
A. There are too many differences to mention! When it comes to city life, I think The Netherlands is more relaxed to move around in. We usually use the bicycle to get everywhere in Amsterdam as this is very easy and safe. In The Netherlands people often drink beer on the terrace outside after work, before eating at home. While in Korea people both eat (like Korean BBQ) and drink together more often. Seoul is also a 24-hour city, where a lot of shops stay open all night. This is very rare in The Netherlands.
Of course there are also many cultural differences. The most visible is that Koreans work very hard. More time is dedicated to work. This includes drinking with the boss after work. In the Netherlands people separate work and personal life more I think. 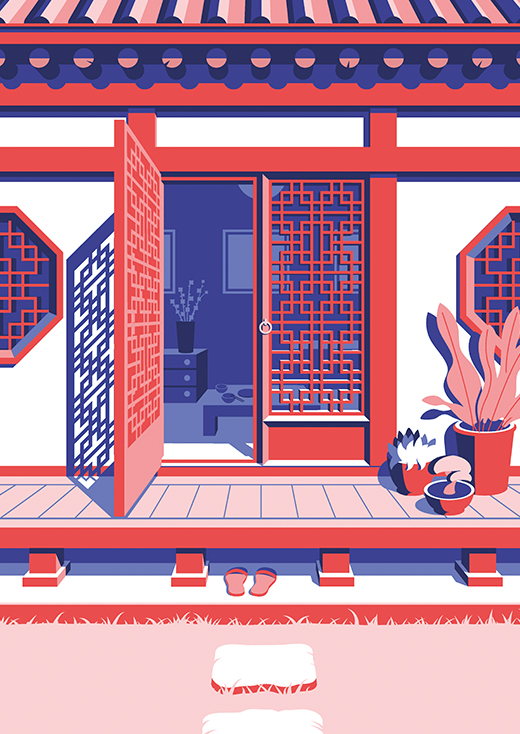 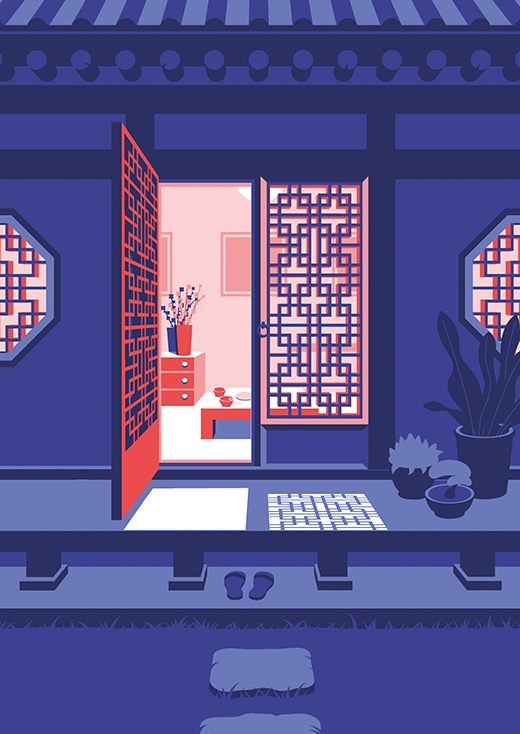 Q. Where do you most want to go and what do you most want to do next time you are in Korea?
A. Next time I want to see more beauty of nature in Korea. This is something I have not experienced a lot. I would like to go to the mountains and forests. However, there are no particular areas I have in mind at this moment.