Seoul That You Won’t See on Tourist Maps
There are people who have been chronicling Seoul over the past decade, at their own pace and moving in their own directions. They have formed Amateur Seoul, which has been putting together maps of fascinating places in Seoul and their stories. There, you will find tidbits about Seoul that you won’t find on tourist maps. When you own Amateur Seoul’s maps, new Seouls will appear.
We look up on maps for similar reasons: to figure out where we are at the moment and how to get to our next destination as quickly as possible. But when you have one of the maps by ‘Amateur Seoul,’ then it is a different story, because you’ll find yourself standing in one spot poring over it. Yoo Hye-in and Cho Ye-jin teamed up for a project group, operating under the slogan, “Reading Stories of the City and Its People through Maps.” 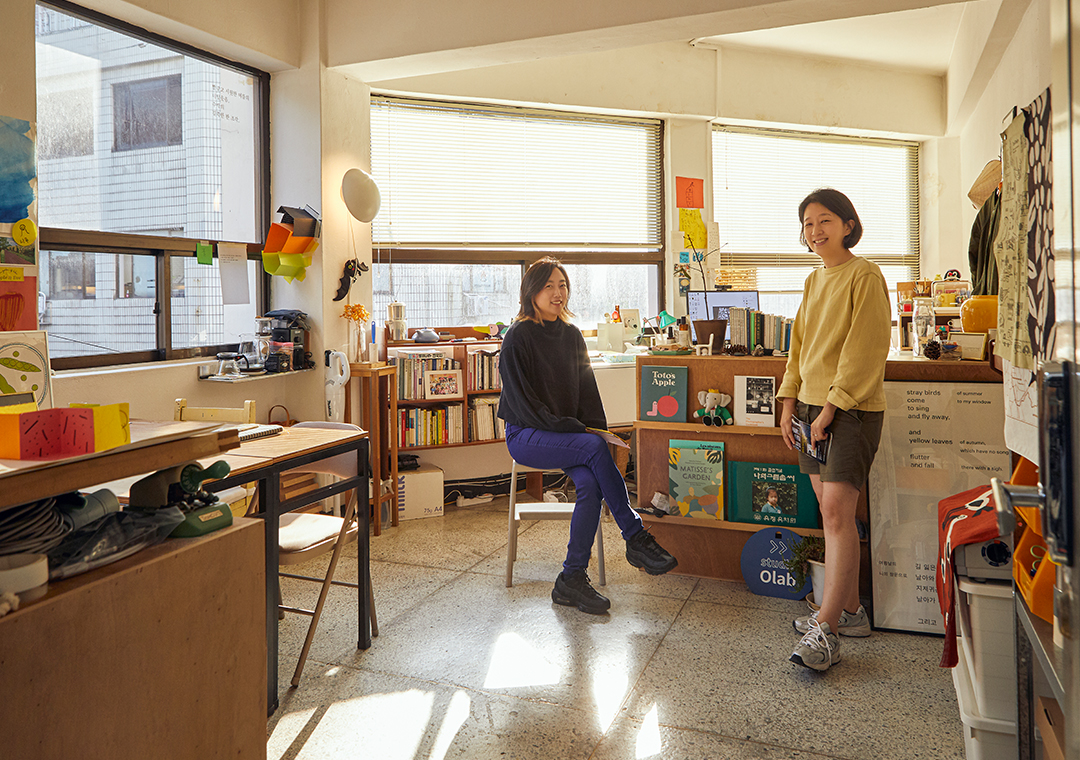 Cho Ye-jin and Yoo Hye-in, who make up Amateur Seoul

“The word ‘amateur’ comes from the Latin word ‘amator,’ which means someone with a liking for something. We may not be experts in architecture or urban development, but we’re documenting Seoul with passion, from a different perspective.”
Amateur Seoul 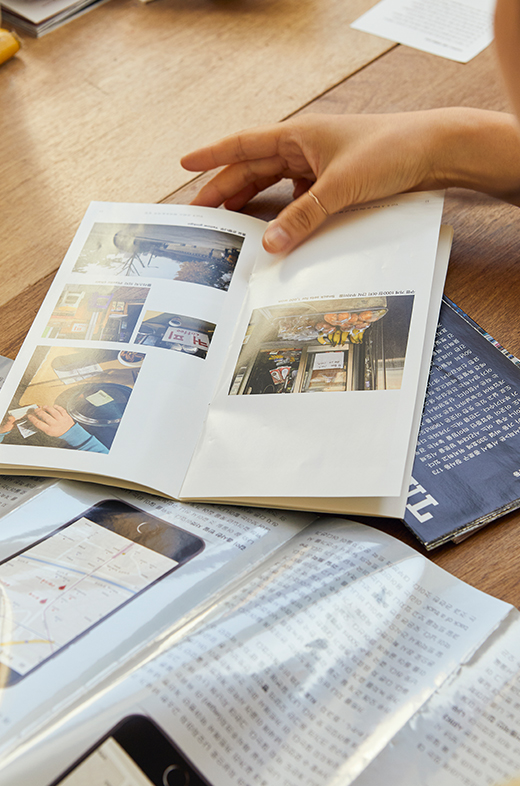 Maps with human touch and stories 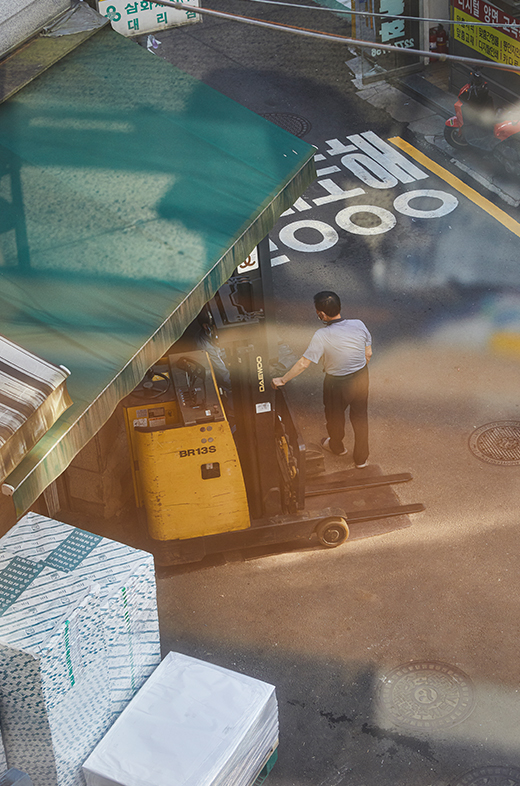 Studio located in Euljiro, a neighborhood crowded with printing shops, and a view through the windows

We Don’t Know Seoul That Well Yet
Of all the Seoulites, how many could really say they know the city well? Perhaps we only get to see our home, workplace and the mall we frequent on weekends. In that sense, many of us may just be amateur travelers to the capital city. And four college friends, all born and raised in Seoul, began calling themselves as such, and they started exploring their favorite neighborhoods of Seoul. In 2009, ‘Old Seoul’ came out as their first map produced after a year of walking through their favorite corners of Seoul for nearly a year, covering Wonse-dong, Gye-dong and Jae-dong in Bukchon. (Yoo Hye-in and Cho Ye-jin have picked up the slack for two friends who have moved to Busan and the United States).
Amateur Seoul doesn’t simply go to tourist attractions or landmarks, but instead sheds light on historical neighborhoods. Yoo and Cho chronicle history of those places and capture their charm by interviewing people closely connected to such neighborhoods. The duo have covered Ikseon-dong in Jongno-gu, which was part of a housing development complex in the 1920s; the watch alley in Yeji-dong in Jongno-gu, where dead watches come to life; and the printing alley in Euljiro of Jung-gu, and its famous smell of ink. For over 10 years, they have issued 10 maps on 10 different parts of Seoul. 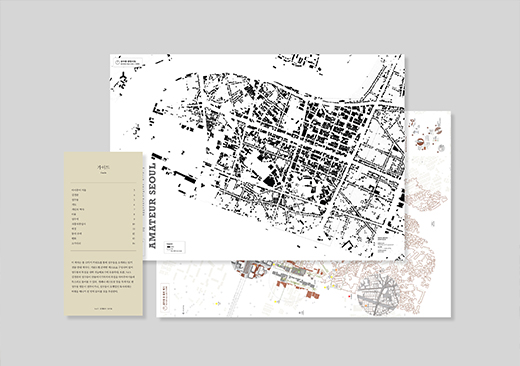 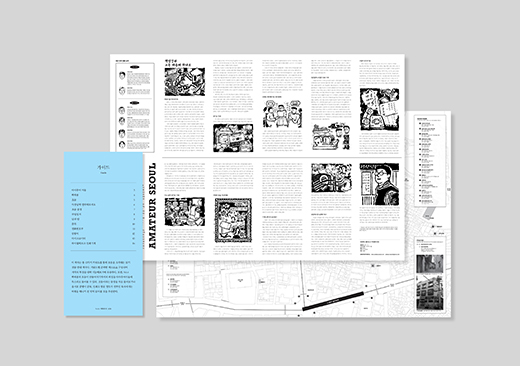 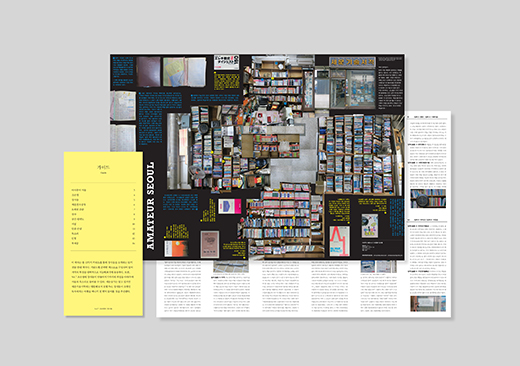 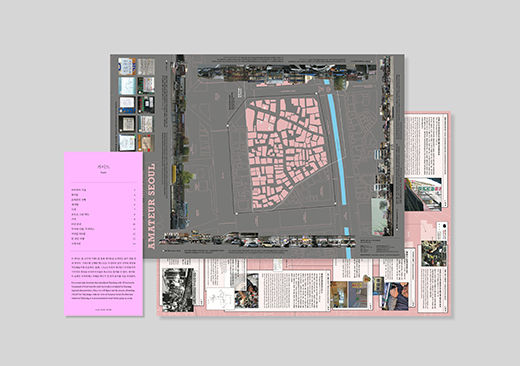 Extraordinary Maps by Ordinary People
At first glance, Amateur Seoul’s maps may not seem all that different from regular maps. But what’s on Amateur Seoul’s maps is far from ordinary. Or you may even say they will catch your attention precisely because they are ordinary. “In those places, it’s hard to run into passersby or tourists. We rely on our personal experience to come up with ideas for each edition of our maps,” the duo said.
The ninth edition was titled ‘A Day in the Life of Mr. Chris Hamamoto.’ It was inspired by fruit carts, shoe carts and beverage carts that the duo noticed on their commute to their studio in Euljiro. The seventh map, ‘Cho Eun-young’s Jangsa-dong,’ was built off a tiny bookstore discovered by chance. It introduces readers to Jangsa-dong through ‘Sewoon Technical Bookstore,’ a 16.5㎡ shop that had stood for half a century. Amateur Seoul has a knack for unearthing fascinating little nuggets about different places across the city and for turning these stories into maps. 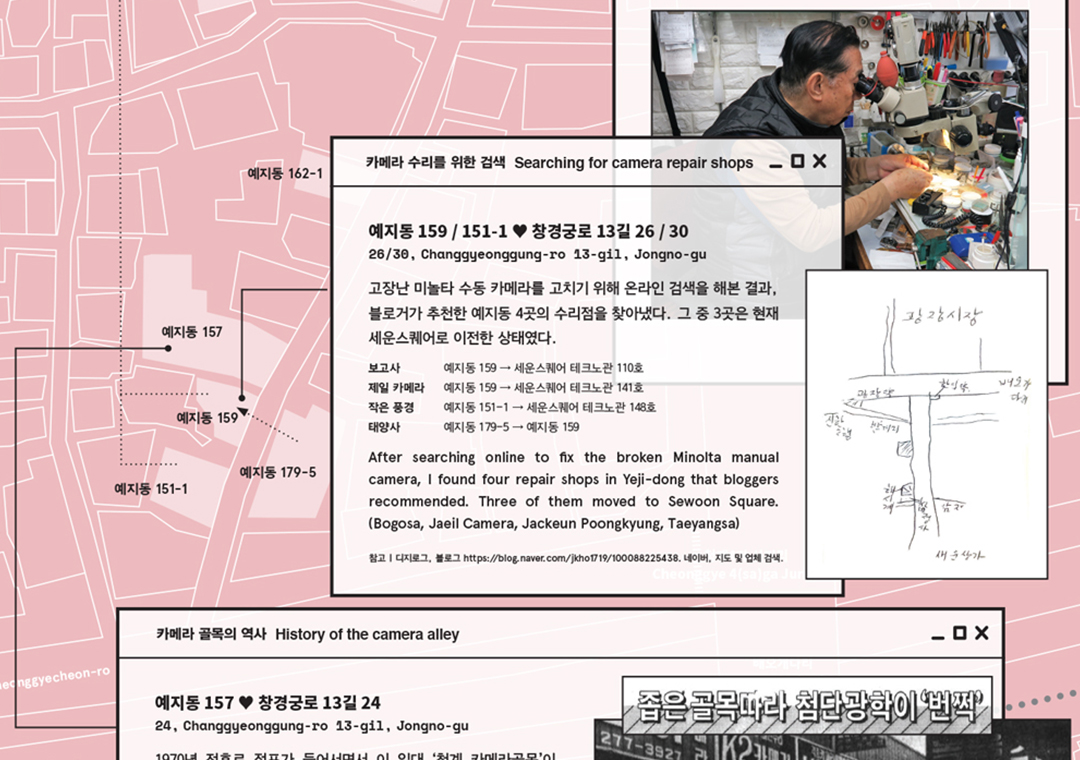 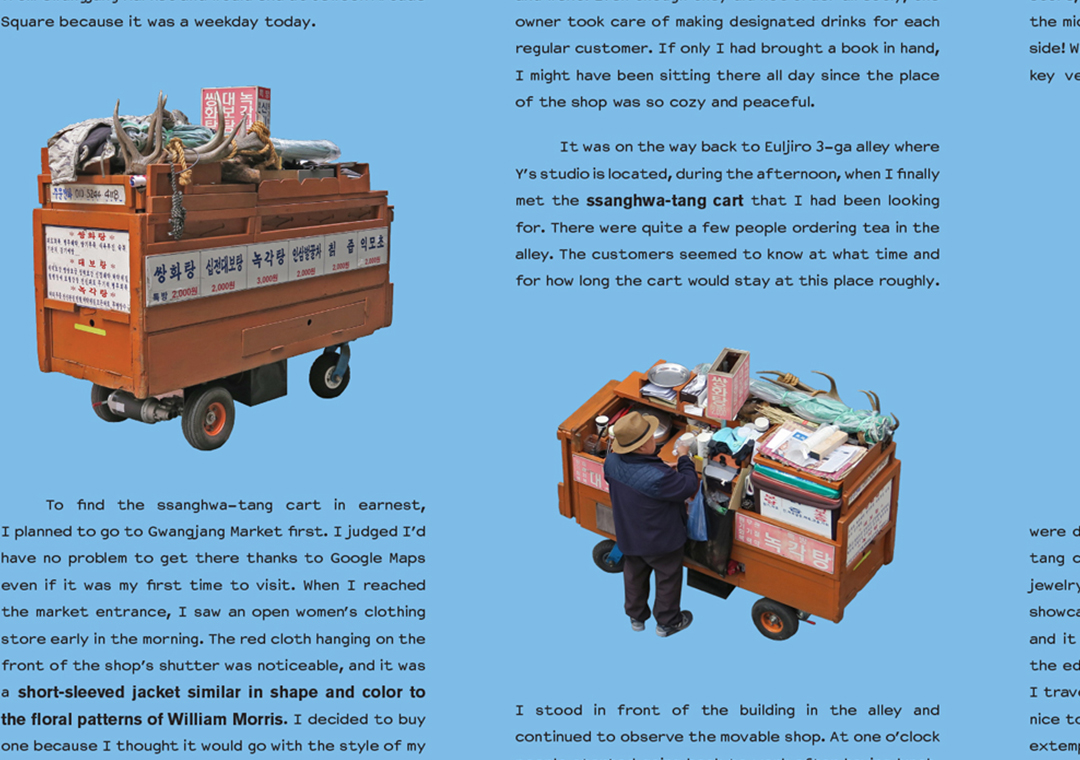 Many of the areas covered on Amateur Seoul’s maps have been redeveloped or have gone out of business. Sewoon Technical Bookstore has closed down. “We may not always chronicle contemporary Seoul, but through our maps, people can always imagine old places and people who once lived there,” the duo said. Amateur Seoul’s maps are a part historical document and a part a letter to the future. At a time when map apps are constantly updated, Amateur Seoul’s maps are outdated and aren’t really helpful to people trying to find their ways around. But there’s something about the scent and the feel of the paper that will tug at your heart. And this seems to be the perfect material to capture stories of these heartwarming places and their people. And once you get lost, you may start seeing things that didn’t catch your attention before. In that moment, you’ll become a traveler in the truest sense of the word. 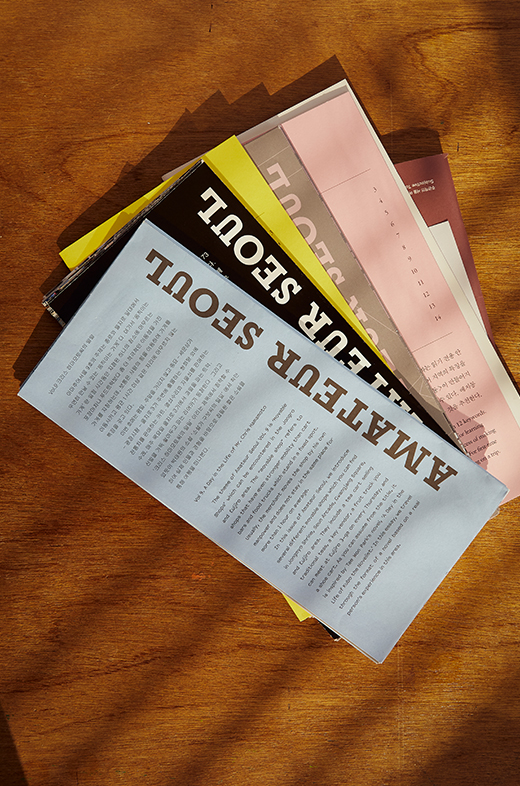 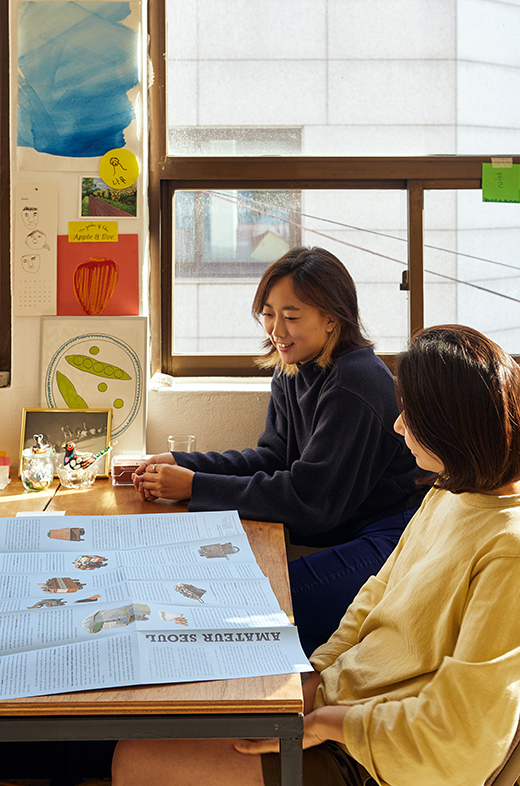 “Seoul is a diverse city where ‘the new’ and ‘the old’ co-exist.”
Amateur Seoul 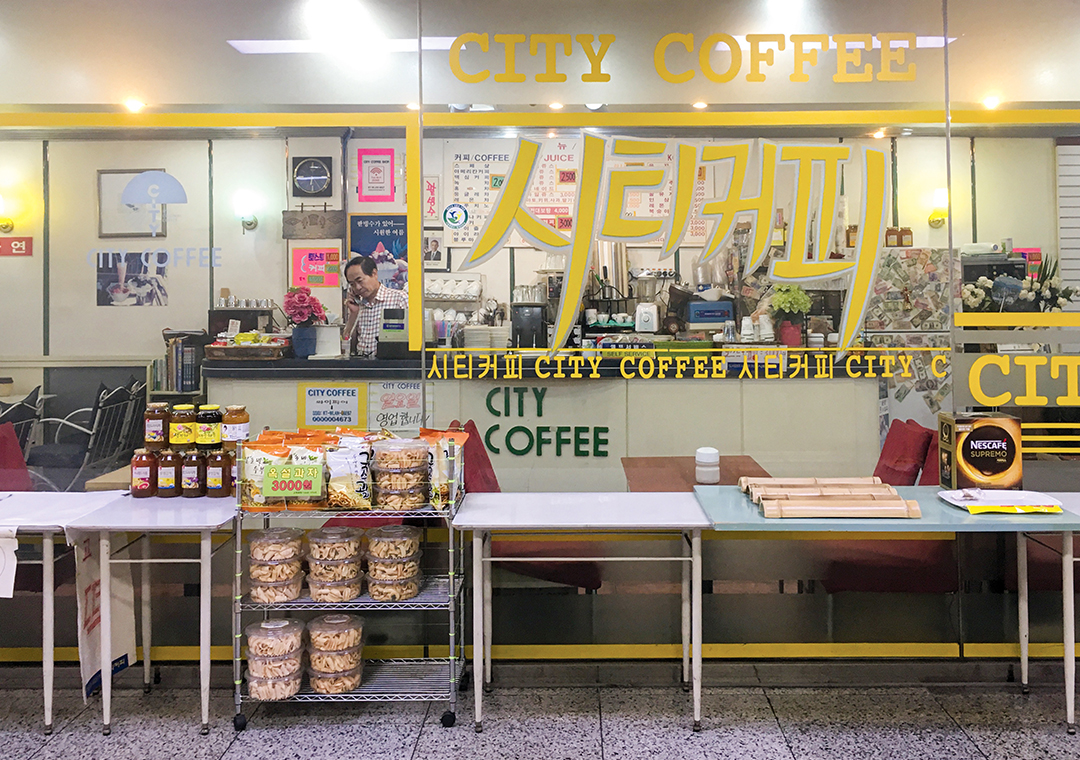 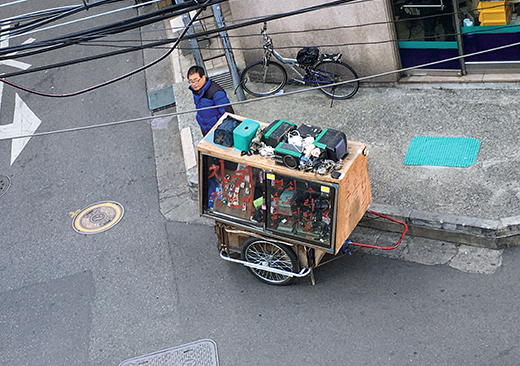 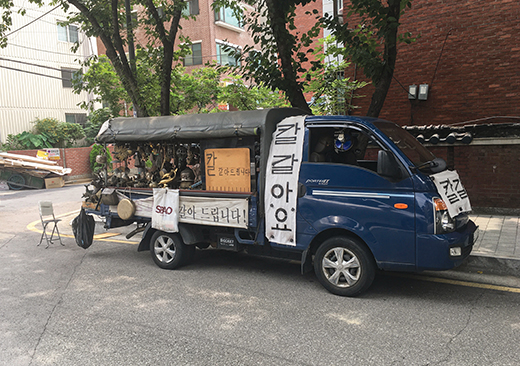 Traveling from Amateur Seoul’s Point of View
Yoo and Cho have a few suggestions for people traveling to Seoul, and they’re fairly straightforward. One, try walking through the underground path stretching from City Hall to Dongdaemun without coming outside. Two, see how seniors in Jongno are dressed, and check out pots and plants at homes, pharmacies, barbershops in the area. Three, keep an eye out for portable stores. “Carts that we featured on our map aren’t just available in Euljiro. It’s just that people don’t’ really pay attention to them. It’s a lot of fun to discover things that we didn’t take interest in before,” the duo said. And these suggestions would obviously work for residents of Seoul, too. Let’s go see new sides of Seoul that you never knew before. 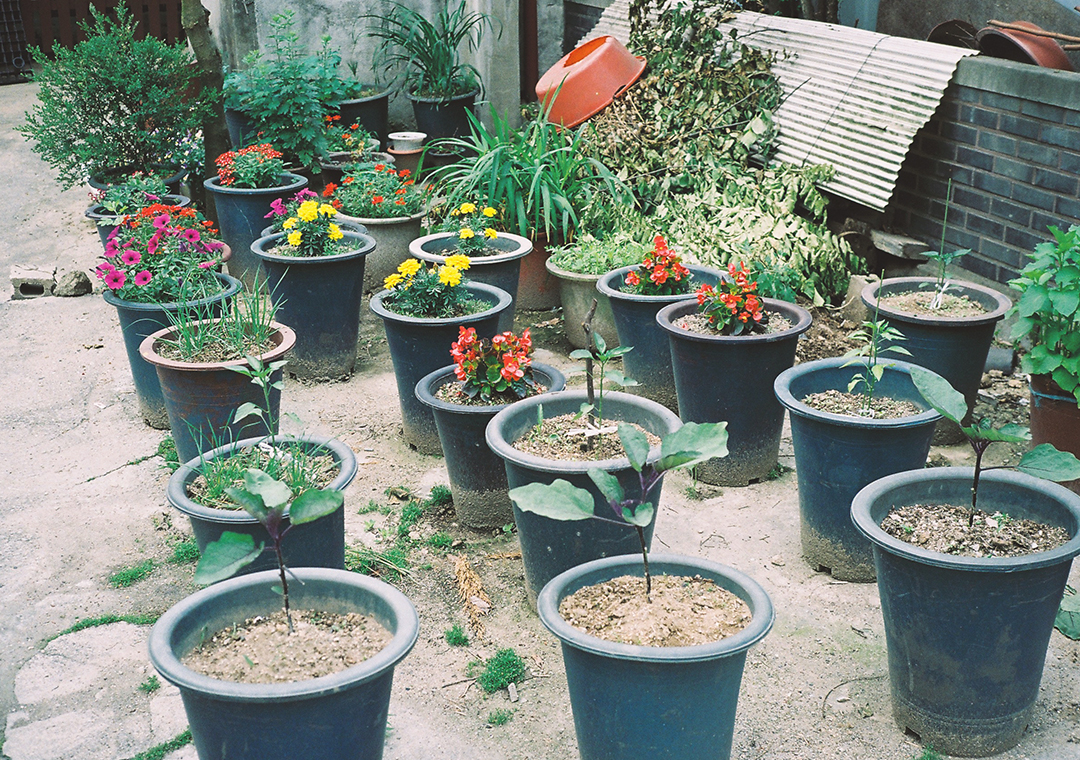 Pots on the street © Amateur Seoul 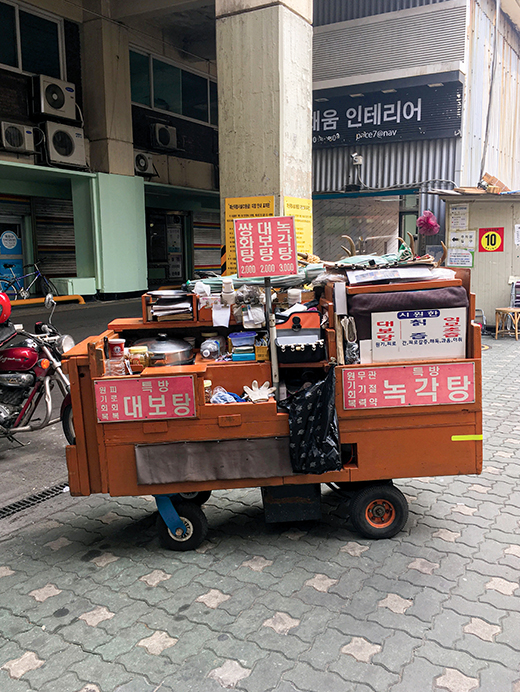 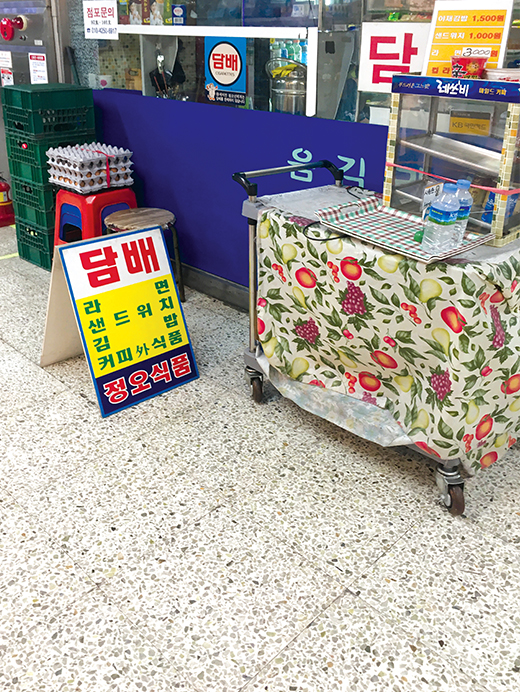 Amateur Seoul
In addition to producing maps, Amateur Seoul runs exhibitions and workshops. The 11th edition of the map is in the works, and will be based on answers to poll questions offered during the exhibition < Solid City > at Sehwa Museum. The new map will be unveiled during < The 13th Unlimited Edition – Seoul Art Book Fair 2021 >, which opens on Nov. 11. Amateur Seoul has run a wide range of visual experiments, in search of the format that can best capture stories of places and people, within the framework of maps. We can’t wait to see Amateur Seoul’s next map.
Website www.amateur-seoul.com
Instagram www.instagram.com/amateurseoul