Digging at Vinyl Shops in Seoul
Listening to music on vinyl is a vastly different auditory experience than doing so on streaming services. And people who have had such pleasure are now frequenting vinyl shops across Seoul.
Place your vinyl on a turntable, and then put the cartridge on the record. It will start spinning at 33 1/3 rpm. Absorbing the weight of the tonearm, the cartridge and stylus begin their trip along the grooves on the record. Music will start playing. 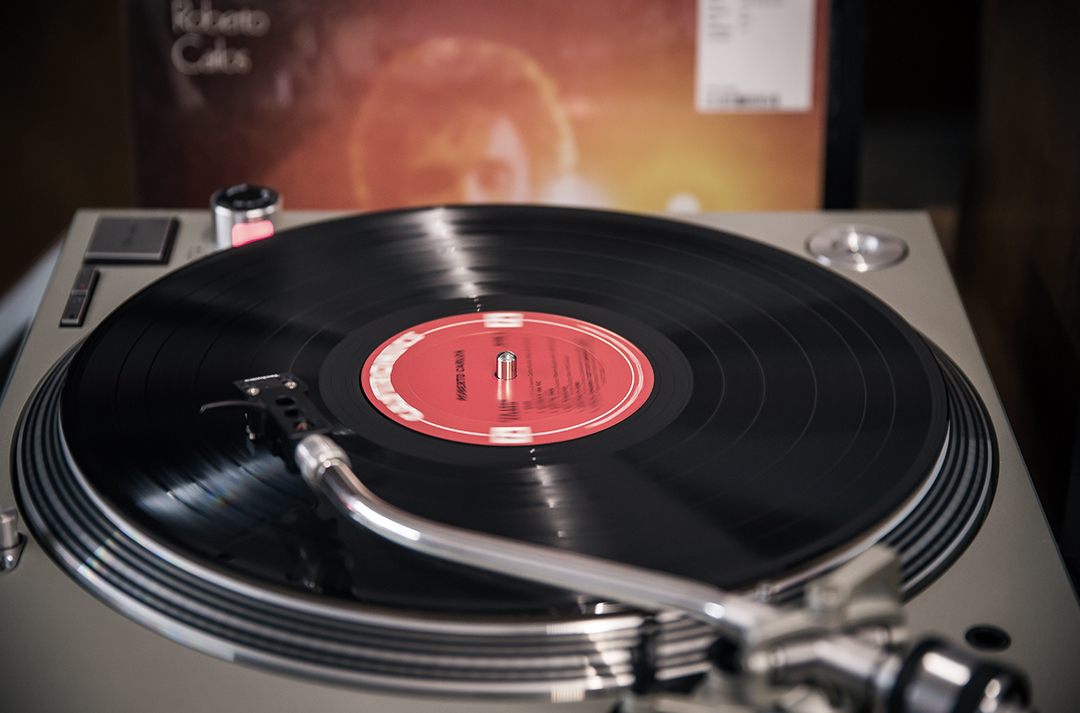 Vinyl is Science
Grooves may not seem like much, but they contain sound in such precise ways. The inner part of the groove carries the left-channel audio and the outer part delivers the right-channel audio. The wider and deeper the groove, the lower the sound is. If it is narrow and thin, then the pitch is higher. These are called grooves because music is produced through the vibration of the stylus on these wavy, three-dimensional grooves.
We tend to think of vinyl as being analog, but it’s quite scientific. And vinyl records have become all the rage in the 2020s. We’re all just a click away from playing one of billions of songs available on streaming sites, but many of us obviously don’t mind getting up from our seat and flipping the record after 30 or so minutes just to play music. 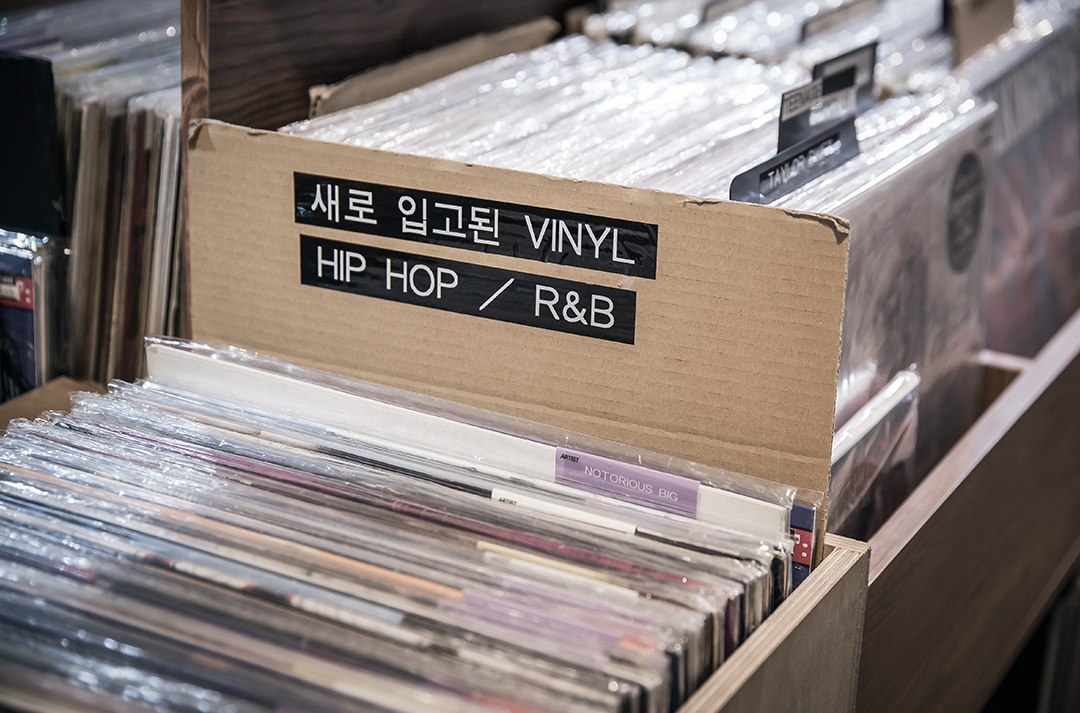 Vinyl records have had their moments in the past, too. Back then, record shops were everywhere. Posters for latest albums and best-selling records were on display by the shop windows. Twelve-inch records were a work of art in and of themselves. Your average neighborhood music stores mostly had licensed records or popular albums. To get your hands on the latest releases from overseas, rare editions or original releases with songs banned in Korea at the time, you had to venture out to Hwanghak-dong in Jongno or Hoehyeon Underground Shopping Center. They were heaven on earth for LP lovers. Shops at Hoehyeon had original editions, and Hwanghak-dong was where you went to get used records. You could also talk with store owners or staff. Your favorite record store doubled as a guest house for fellow music aficionados.
Compared to those days, there are fewer shops for vinyl fanatics to visit. So they poke their heads around, trying to find places to go digging (act of trying to find records). Let us introduce you to two vinyl shops that give you an opportunity for special experience. They remind us that records don’t just exist in our memory, but they’re with us right here and right now. 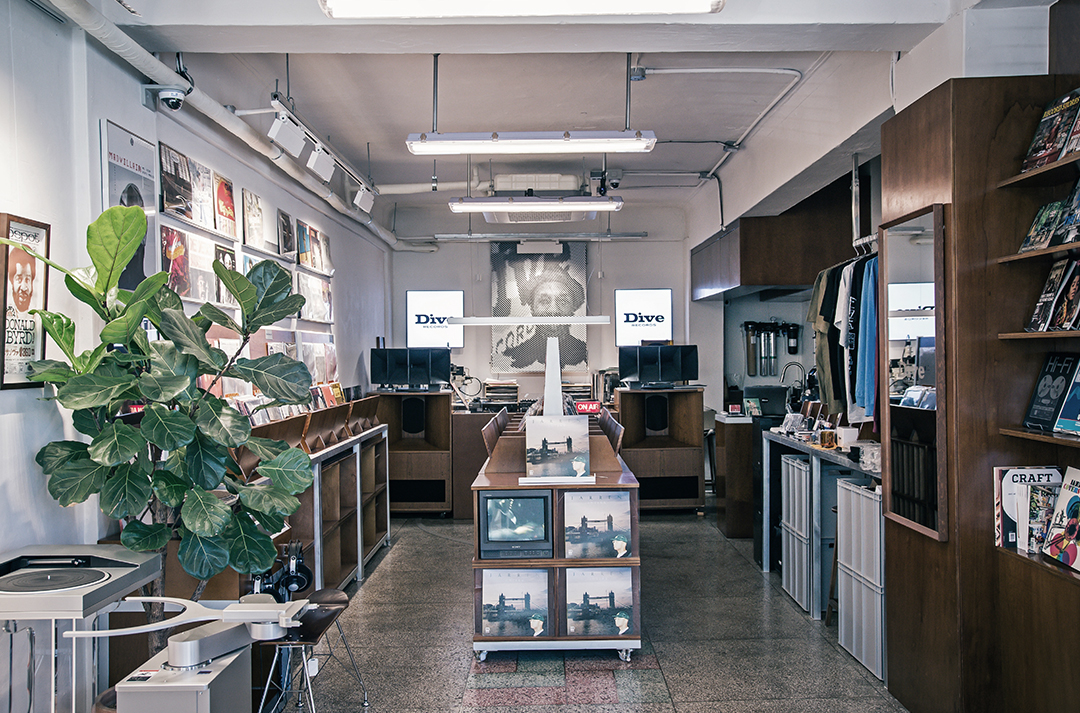 The sleek interior design is what separates Dive Records for other vinyl shops today. 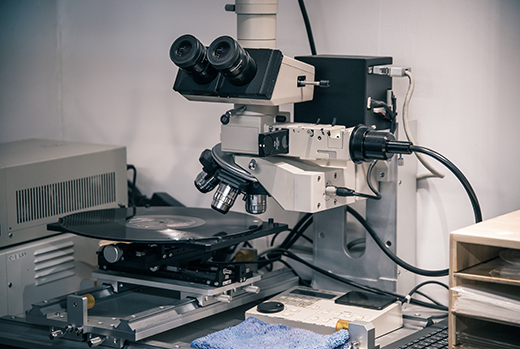 You can check for scratches or dust on records using the microscope. 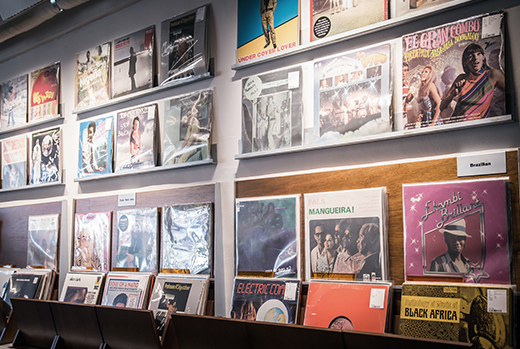 Dive Records. Where Else Would You Hear These Songs?
There’s a flood of information on music available, but one can only listen to and enjoy so much of them. Streaming sites, using algorithm, will continue to recommend one song after another. And that has made it difficult for you to go out of your comfort zone and discover new stuff.
Dive Records, located near Euljiro 3-ga Station, is just the place where you can discover the joy of stumbling on good music. Once you enter the shop, you’ll be hearing some mysterious but undeniably hip music playing out of impressive sound systems. Dive Records is housed in an old building but the shop itself is the definition of neat and clean. Handpicked album covers are arranged along the walls, giving the shop a feel of an art gallery. There are also pieces of equipment that you wouldn’t be able to identify at first glance. 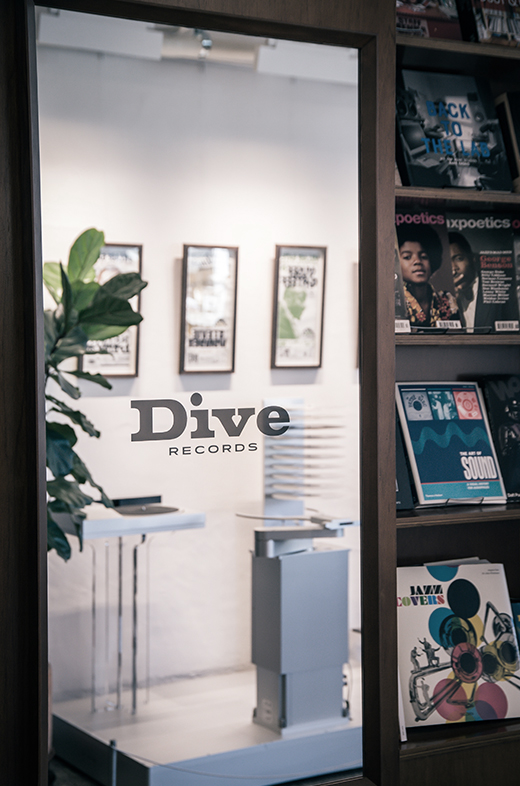 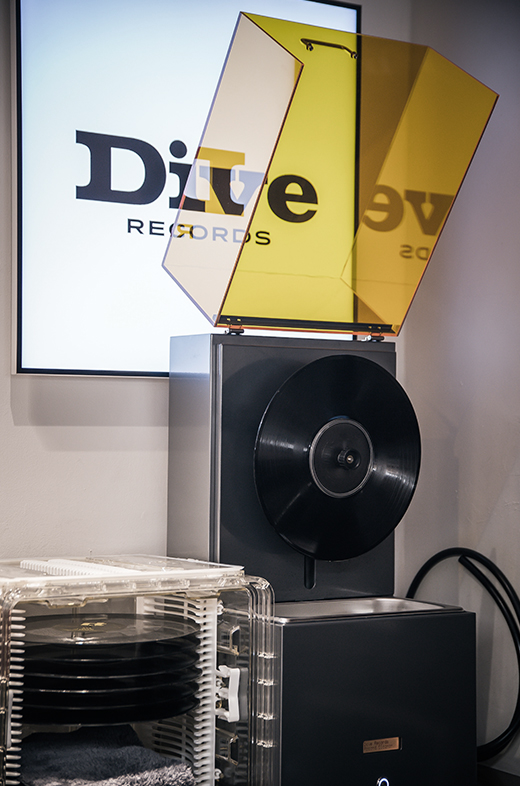 Dive Records is known among music lovers to be such a pleasant place to visit, a shop where you can expand your music taste. This is all thanks to shopmaster Kwon Young-jin, who will kindly give you rundowns on music and make recommendations. Dive Records opened after Kwon and his partners at an interactive media company joined forces.
Dive Records wants to be a shop that plays good music produced by honest work of artists and shares that joy with its customers. Kwon’s recommendations know no boundaries, covering a Chicago-based soul band, disco- and boogie-based gospel, and Korean style reggae. During our visit in September, ‘Antera’ by the Los Angeles-based electronic artist Jarren graced a corner of the shop as the ‘Album of the Week.’ 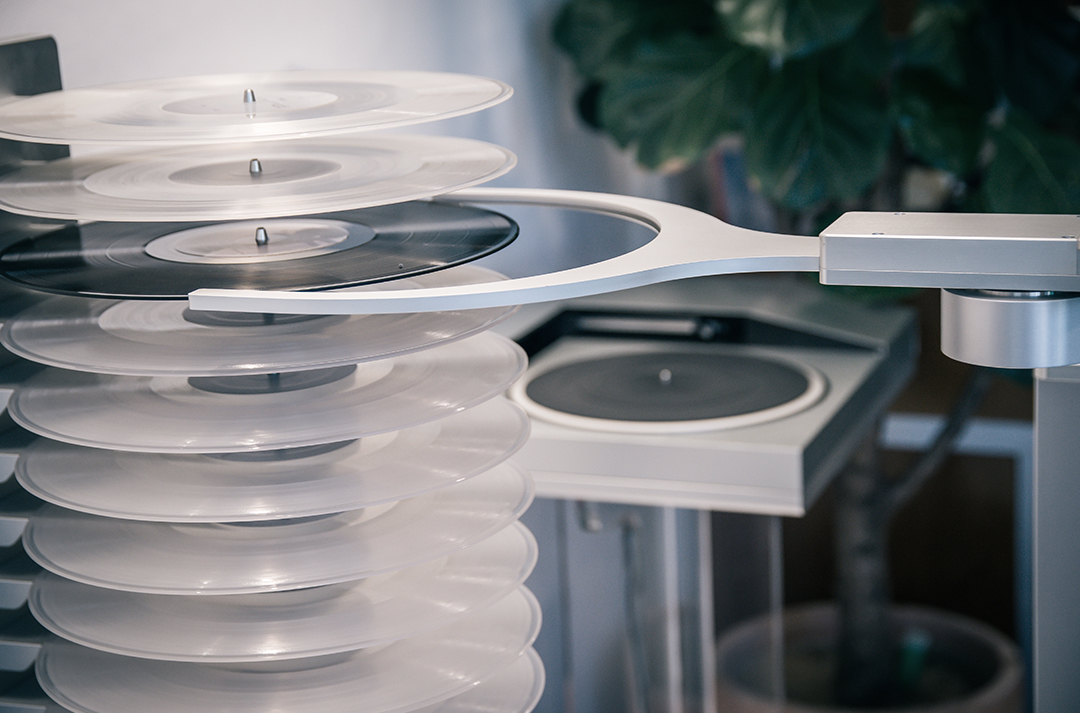 The automatic record changer, designed and built by Dive Records 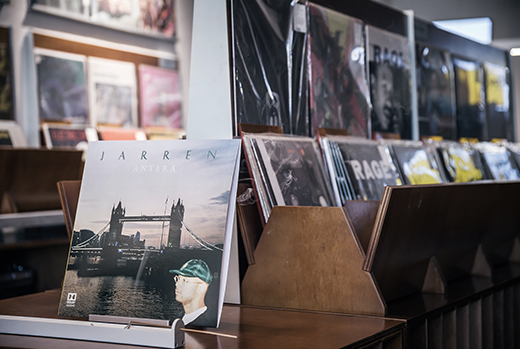 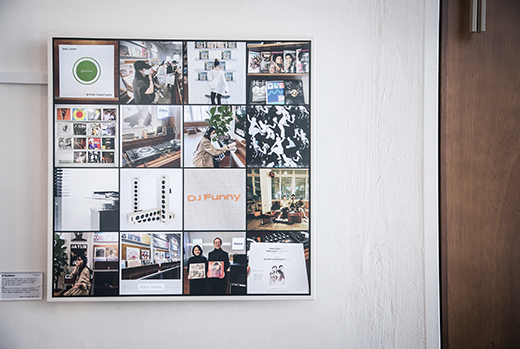 The shop also showcases equipment related to records that you can try your hands on, and you’ll be tempted to buy all of them. And these are all designed and produced by the shop. The automatic record changer, with tongs picking out and placing LPs on the turntable, was something else. You could stack up 10 albums on one side, and the changer will do all the work to play the music for you in such natural and smooth motion. The vinyl cleaning system, a microscope to check on the condition of the records, and the digital frame that shows you specific images based on Instagram hashtags were some other items that could make you reach for your wallet.
Grab a cup of coffee and listen to recommended songs and try cool-looking equipment at Dive Records. Sure, it’s fun to finally find the record you’ve always wanted. But Dive Records is here to remind you that there are other joys you can discover in music.
Address 2nd Fl, 55-1 Chungmu-ro, Jung-gu, Seoul
Instagram DiveRecords 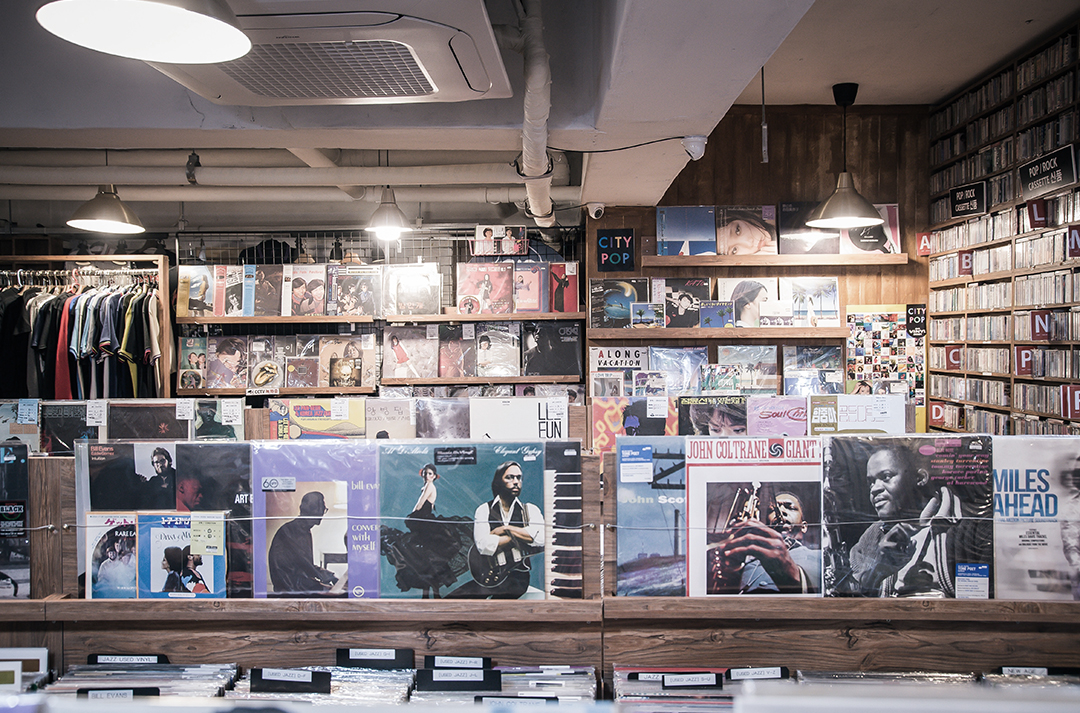 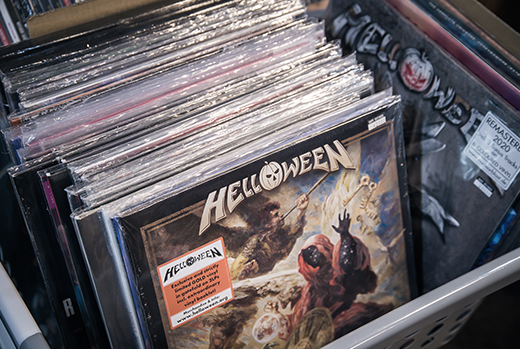 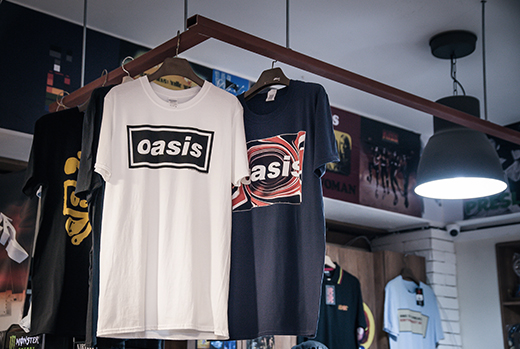 Dope Records, Trip Down the Memory Lane
‘Dreams,’ a hit single by Fleetwood Mac, re-entered the Billboard Hot 100, while its album, ‘Rumors,’ also returned to Billboard 200. This was 43 years after the album came out and the single reached No. 1 on Billboard. A TikTok video of a skateboarder lip-synching to the song went viral, and the old song became popular again. And the recent surge of vinyl records has been just as unexpected.
Dope Records, which opened five years ago, is living right through it. The location isn’t exactly convenient, since it sits between Daeheung and Gwangheungchang stations on Subway Line 6, but the shop is usually crowded in afternoon hours. You will find anyone from high school girls in uniform to 20-something office workers to middle-aged music fans. Dope Records holds about 20,000 albums. In addition to LPs, it has cassettes and CDs, which just may be more difficult to find these days.
When it first opened, Dope Records mostly sold rock albums. But as the popularity of vinyl grew and visitors started getting younger and younger, Dope Records began stocking its shelves with albums in other genres. Modern artists like Billie Eilish, Beyonce and Khalid are also putting out LPs. Vinyl no longer just leans on trips down the memory lane for old music fans. 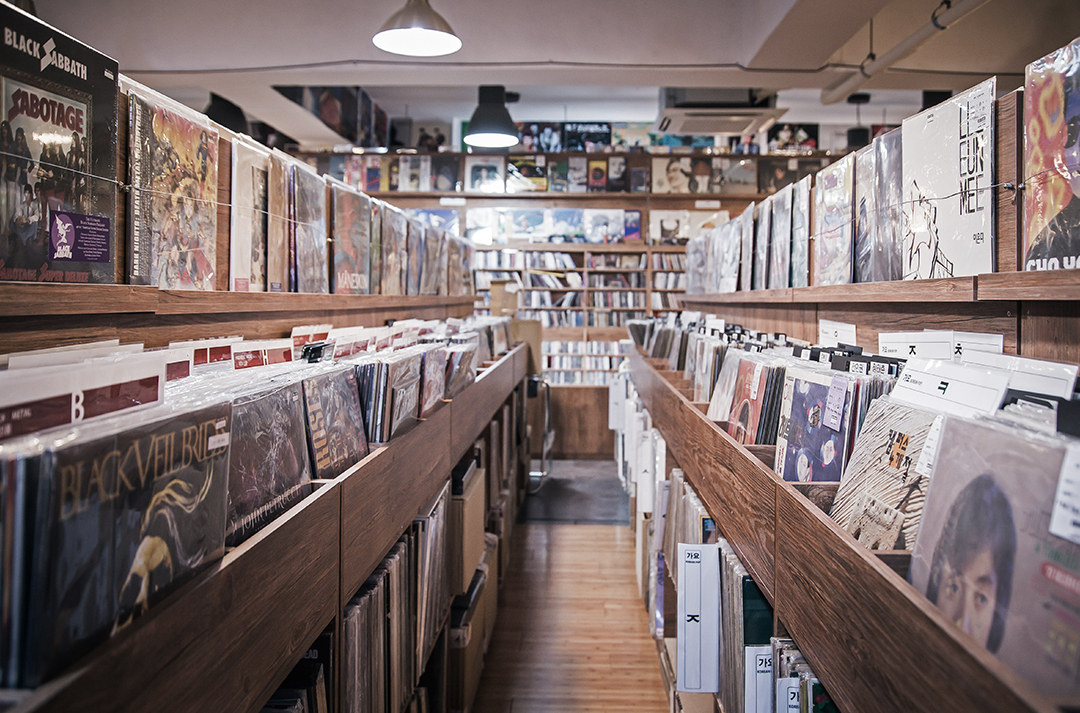 The shop is packed with new releases and used records. 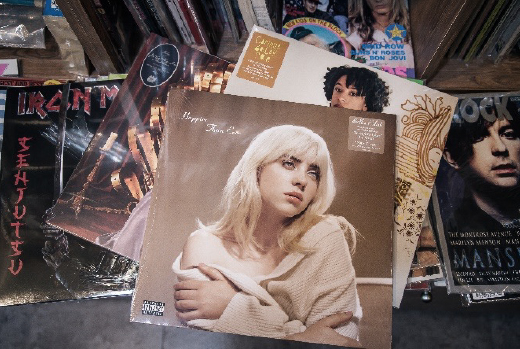 Albums by Billie Eilish and Corinne Bailey Rae, among the most popular records of late 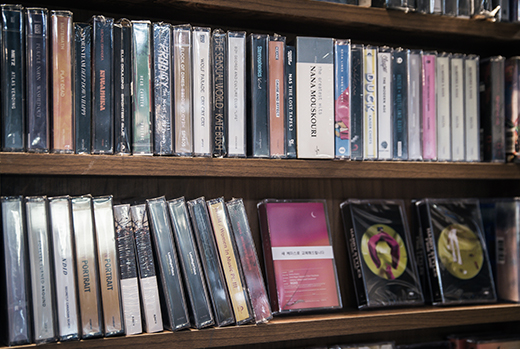 There are also massive amounts of merchandise, such as pins, stickers, mugs and t-shirts. T-shirts bearing logos of bands such as AC/DC, Oasis, and Guns N’ Roses or their album covers will wake up the teen rock fan inside grown-ups.
Dope Records just doesn’t have tens and thousands of records. It stays on top of news in music and keeps its fans posted. The shop posts daily updates on new arrivals on Instagram. Despite growing vinyl sales, most of the records are imported. Because there are only limited numbers of imported records allocated to Korea, it’s important for shops to secure as many as they can when they can.
If you have any questions, feel free to ask the staff. Dope Records owner Kim Yoon-joong is an expert in rock. Each staff member has a specialty, so you will get professional help from them regardless of your favorite genre. Latest releases by Billie Eilish, Corinne Bailey Rae and Halsey are some of the hottest records these days. The shop has also been fielding questions about the newest album from the British heavy metal legend Iron Maiden.
It’s no longer strange to see a student in uniform asking about a Led Zeppelin LP at Dope Records.
Address 4th Fl., 211 Dongmak-ro, Mapo-gu, Seoul
Instagram DopeRecords