Brooklyn’s Bushwick, New Melting Pot for Hipsters
If you’ve only been to Williamsburg while in Brooklyn, New Yorkers would ask, “Why did you even go to Brooklyn? Williamsburg is just like Soho. You should’ve gone to Bushwick.”
Brooklyn, one of five boroughs in New York, lies on the western end of Long Island and just below Queens. Brooklyn was once an independent incorporate city before being merged with New York City in 1898. 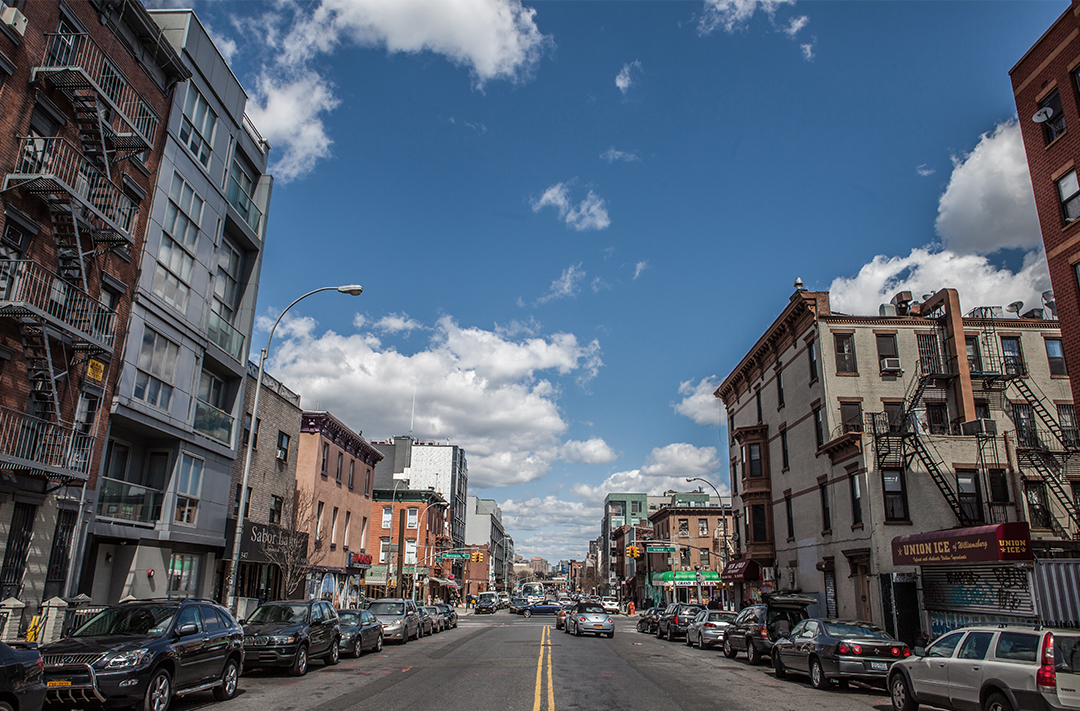 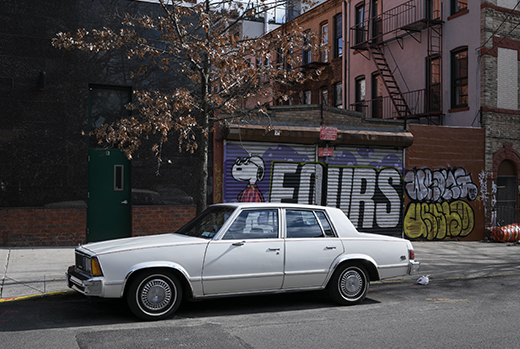 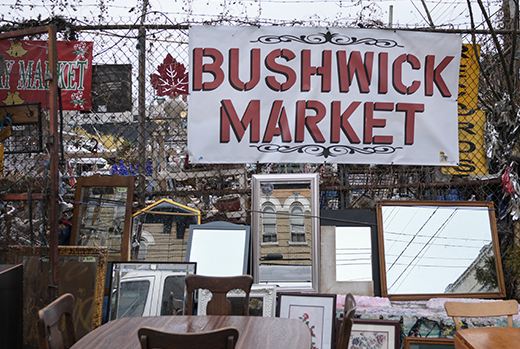 Bushwick comes into view after you exit Jefferson St.

Birth of Melting Pot
Brooklyn used to be a place that you wouldn’t dare visit after dark. But changes started happening when artists, designers and others working in the culture industry settled down there after leaving the heart of New York. Small galleries that opened as a result gained some popularity, and shops, cafés and restaurants for out-of-towners opened, one by one.

Williamsburg emerged as the most popular neighborhood. With Manhattan in full view across the water, Williamsburg became the ultimate destination for hipsters. International tourists made Williamsburg their must-see spot. But gentrification that followed was out of control. Soaring rents drove artists out of Williamsburg and had to move farther away from Manhattan. Their choice was Bushwick, which took the torch as the new hot spot for hipsters. 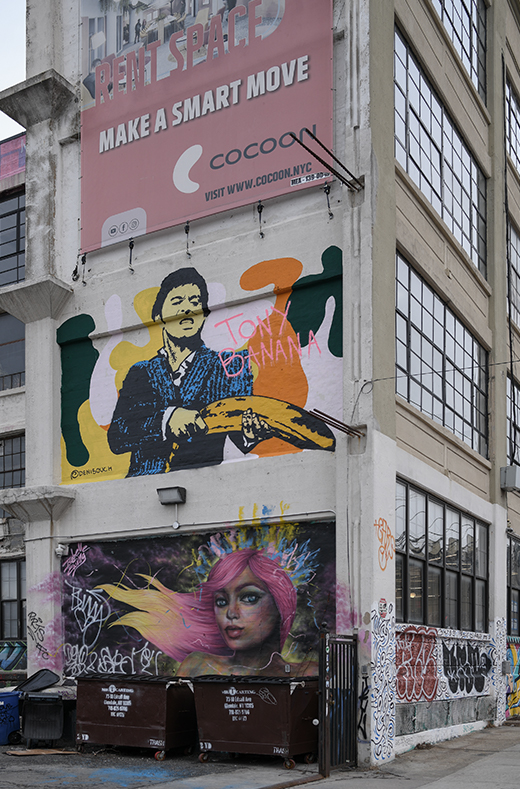 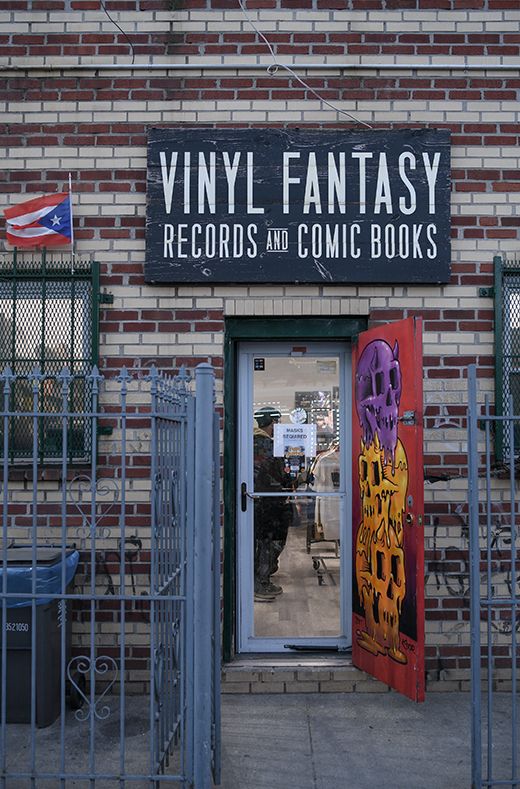 The name Bushwick comes from the Dutch word ‘Boswijk,’ meaning ‘a small town in the woods.’ It was named so by the Dutch settlers in 1638. In the early days, Bushwick was home to a great number of German immigrants. In post-World War II period, people from South America found their new homes in Bushwick. Artists and students from nearby towns and Asian people put down roots in Bushwick, making it a true melting pot for hipsters. 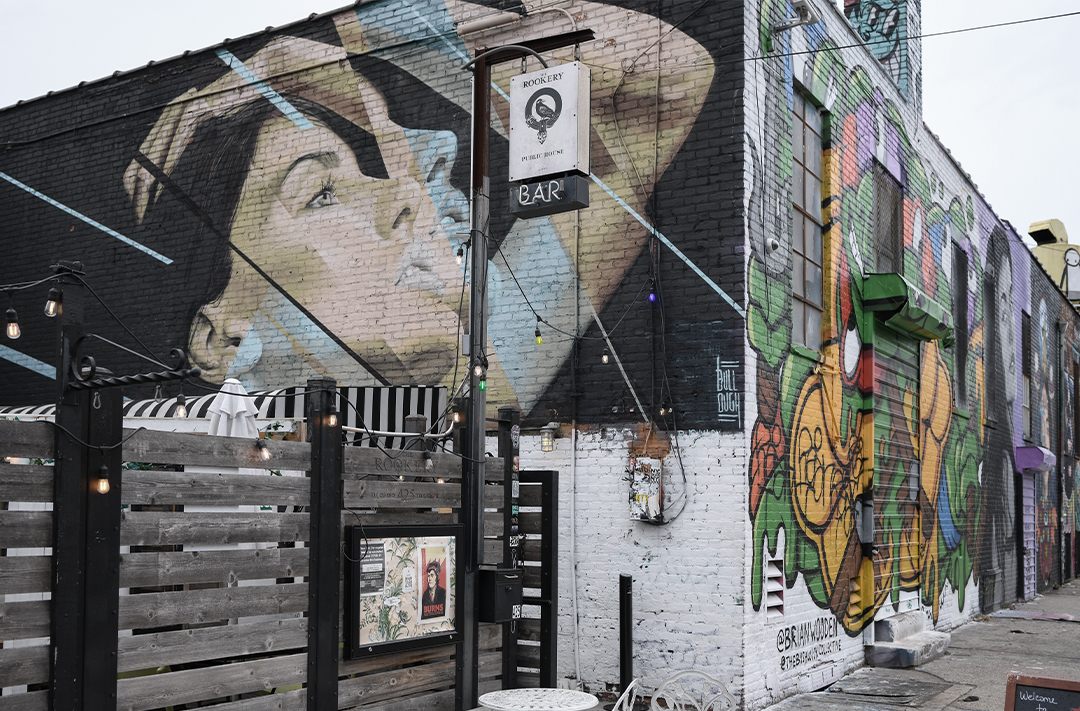 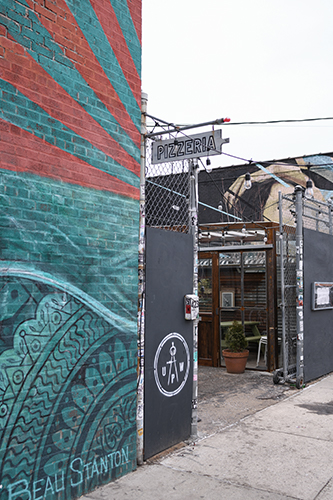 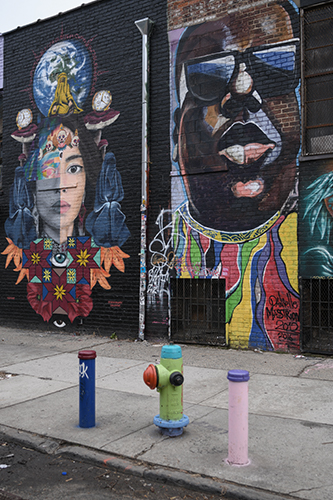 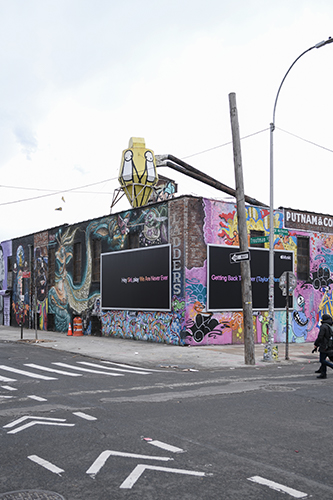 You will see graffiti all over Bushwick.

Small Village with Many Forests
Take the L train from central New York and go past Williamsburg before getting off at Jefferson St. A whole new world will open up. There are no flashy neon signs or skyscrapers, with dilapidated buildings, looking like old factory warehouses, lined up the side of streets. And these buildings are all heavily graffitied. You won’t see too many yuppies decked out in suits here. It’s mostly young folks in a hoodie wearing a cap or unkempt hair, with baggy pants and piercings all over their bodies. You can sense art and youth in the air. 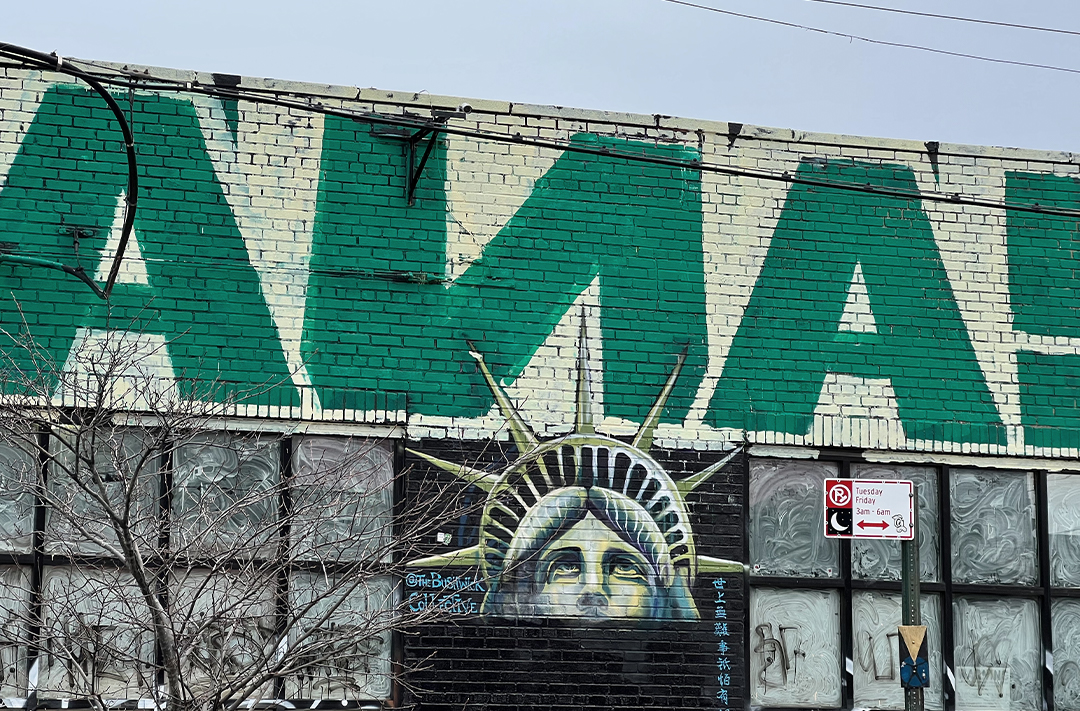 Bushwick Collective is easily the best-known spot in Bushwick. With its outer walls covered in graffiti, this building changed the image of Bushwick. It began with an artist named Joe Ficalora. After losing his father to an armed robber and his mother to a brain tumor, Ficalora decided the town where he was born and raised needed to change. While doing graffiti on walls in the neighborhood, Ficalora called on artists around the world to join him. And they came from everywhere. Murals ranging from stencil art to pixel works, illustrations, and traditional paintings soon took over walls of Bushwick with so much diversity and creativity. Visitors to Bushwick often take pictures in front of their favorite mural. 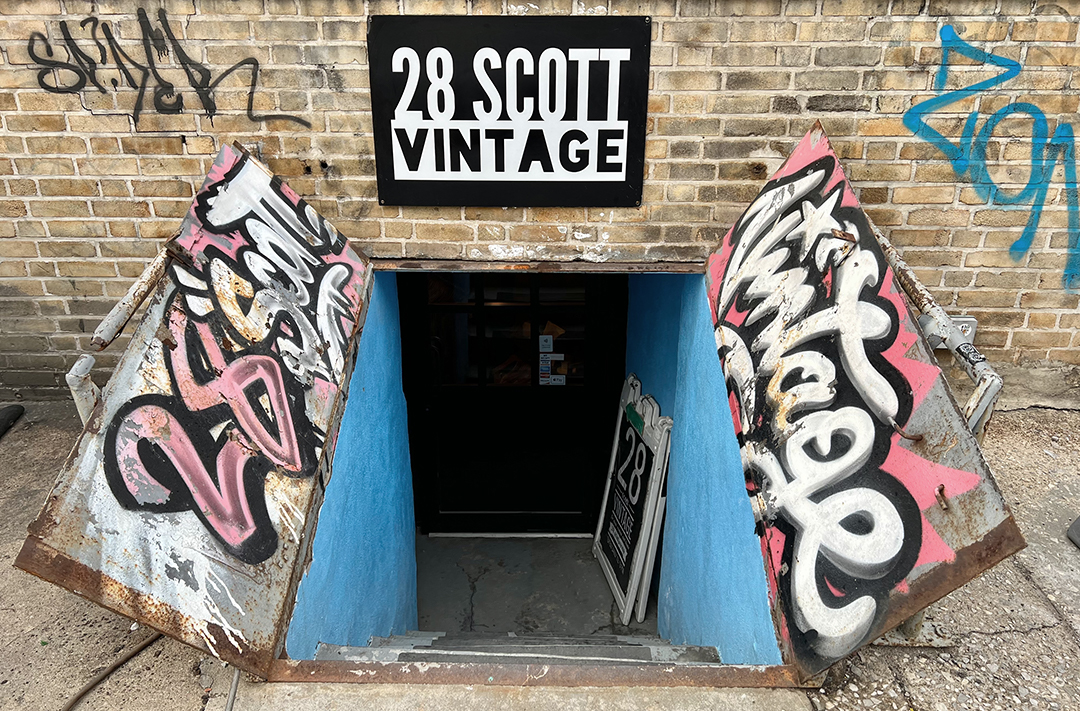 Landmarks in Bushwick
Most buildings in Bushwick were previously used as factories or warehouses. 56 Bogart is a factory-turned-art center, offering atelier-like spaces for artists and designers to live and hold exhibitions. Before the COVID-19 pandemic hit, 56 Bogart also held open studio lectures for those artists, in addition to exhibitions, on weekends.

Cafés and shops in Bushwick are run differently than those in other places, in that they remain mostly closed during quiet seasons or on weekday afternoons, when they typically have few patrons. Many servers and owners are artists themselves. You will find a musical actress waiting tables and a painter brewing coffee. They spend the early part of the week on their craft, and then open their stores from Wednesday or Thursday to Sunday. 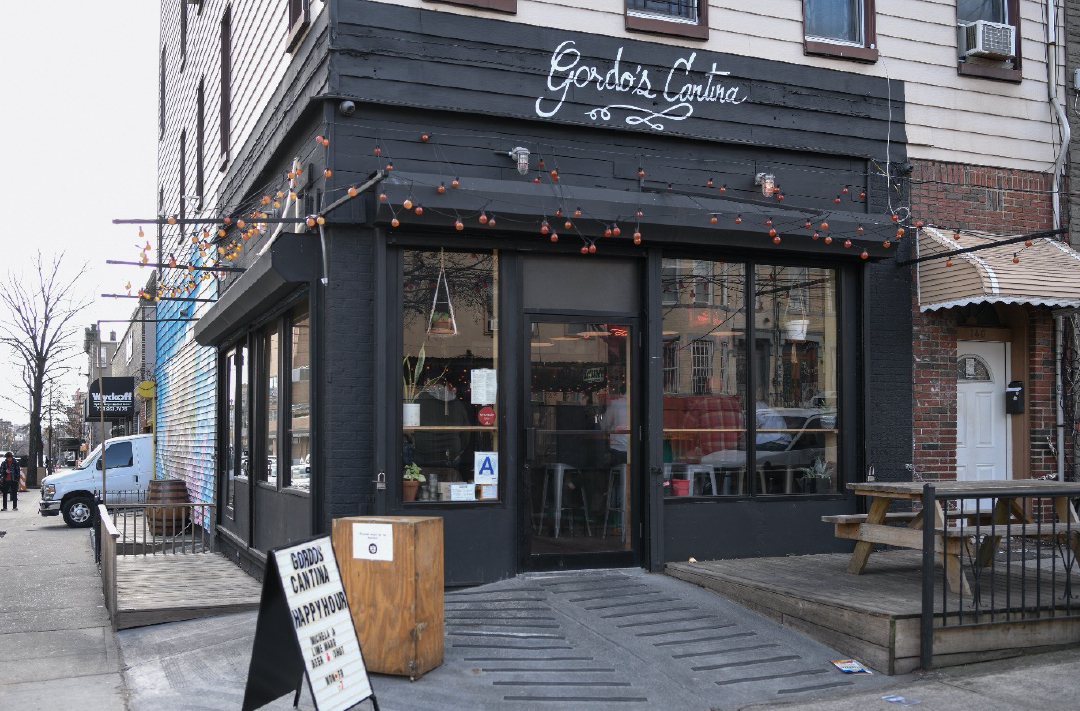 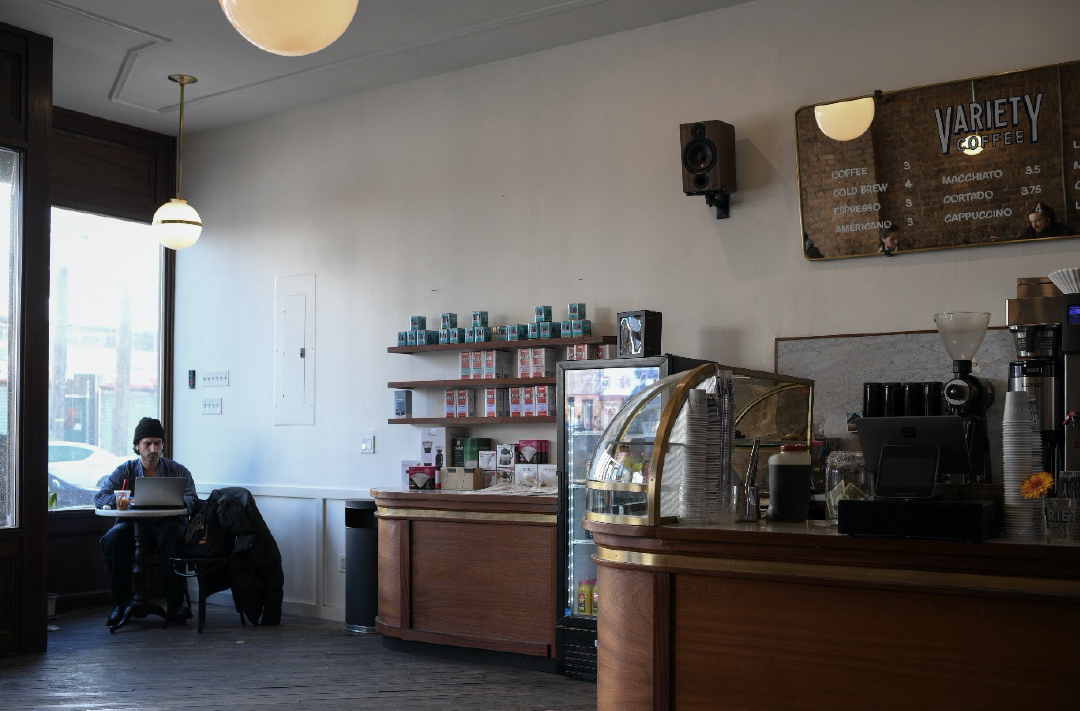 Roberta’s, an Italian pizzeria, and Gordo's Cantina, a Mexican spot, are two of the most popular eateries in Bushwick. Roberta’s is famous for hosting former U.S. President Bill Clinton and his family for a party. Celebrated by the Michelin guide last year, Gordo’s Cantina is best known for its thick and crispy taco, fresh guacamole and juicy steak quesadillas.

Variety Coffee Roasters is a leading local coffee shop in Brooklyn, with three of its six locations all in the borough. You will often find an artist kick starting the morning at this café with a laptop on the table, next to a cup of cappuccino and croissant.

With Brooklyn Brewery having gone too big time, Evil Twin Brewing is now the hottest craft beer place in New York. It sits on the Bushwick-Ridgewood border. 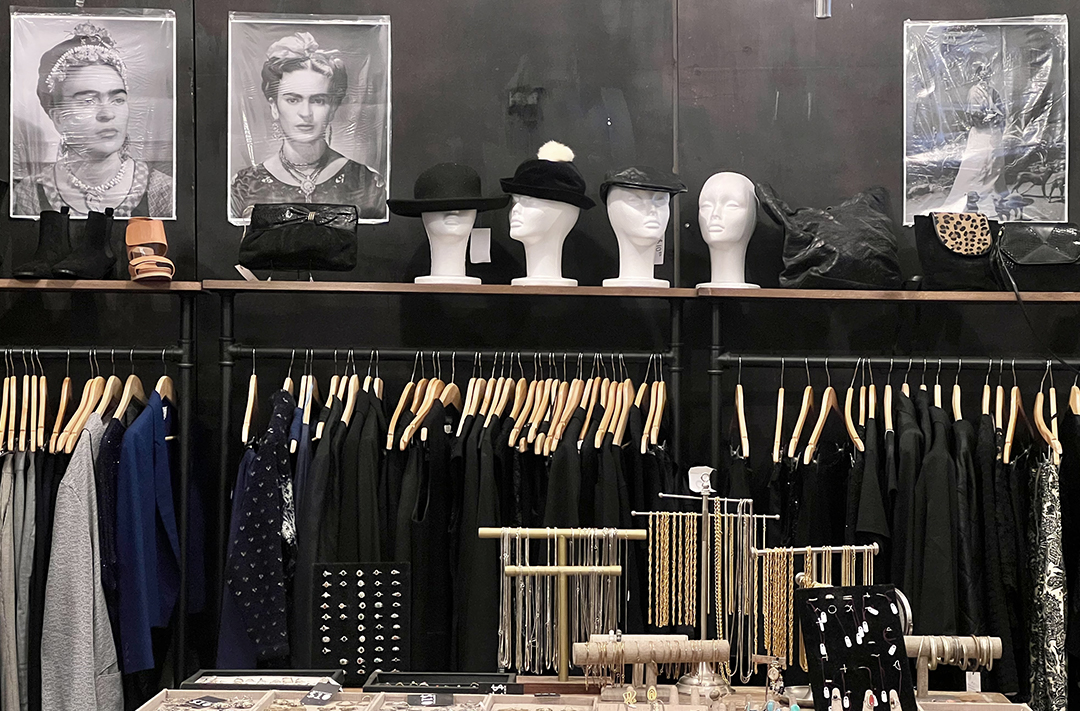 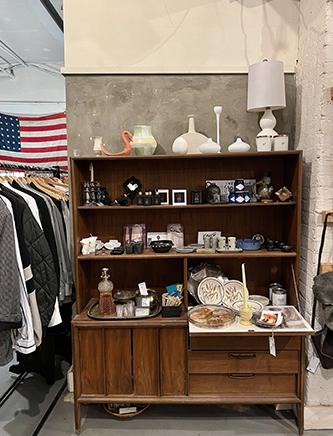 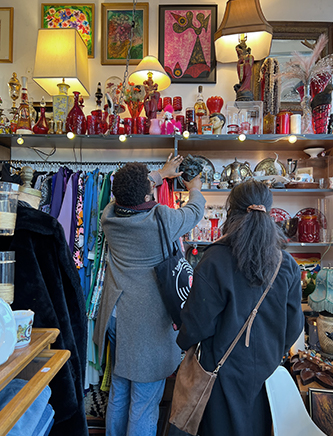 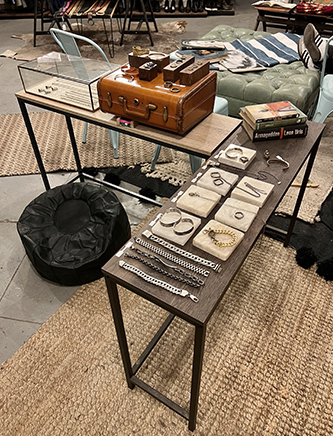 At several shops in Bushwick, you will find vintage items.

Given its rundown buildings and absence of skyscrapers, Bushwick gives off a vintage vibe. And perhaps for that reasons, you will also come across quite a few vintage shops. One common denominator for these stores is that they don’t just sell one type of products, but they offer you anything and everything. Brooklyn Vintage Company, highly popular among the locals, sells everything from clothes and small items to cameras, vinyl records and interior accessories.

28 Scott Vintage, famous for chic staircase leading to basement, brings you vintage clothing and items. It draws people from central New York with a great selection of small vintage products for home décor. 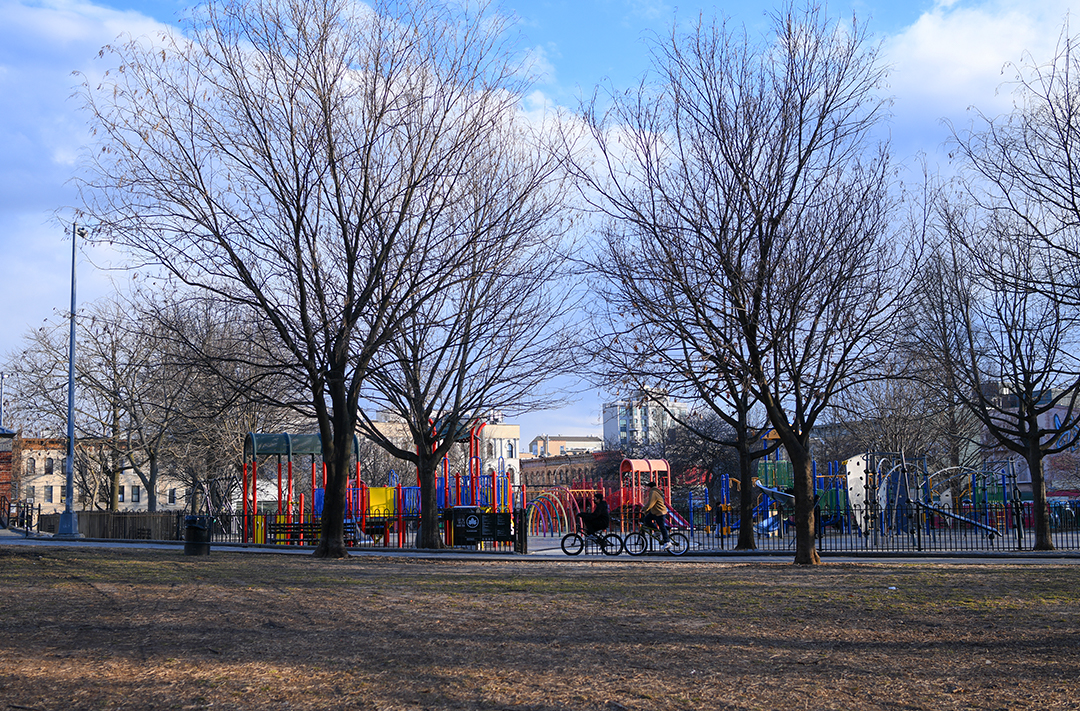 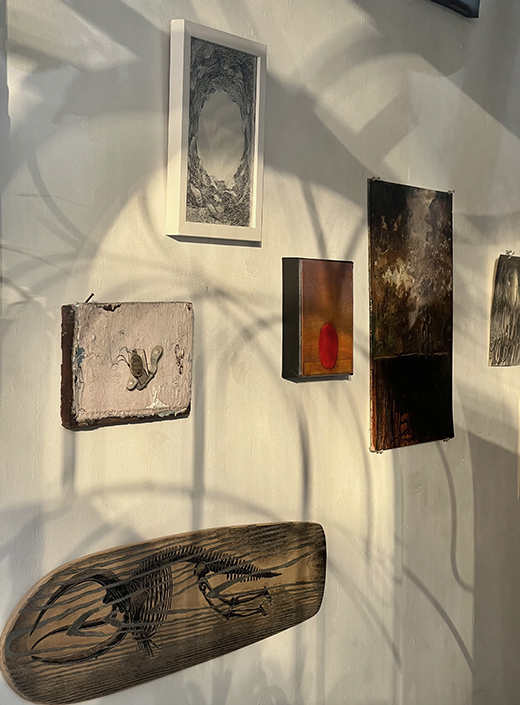 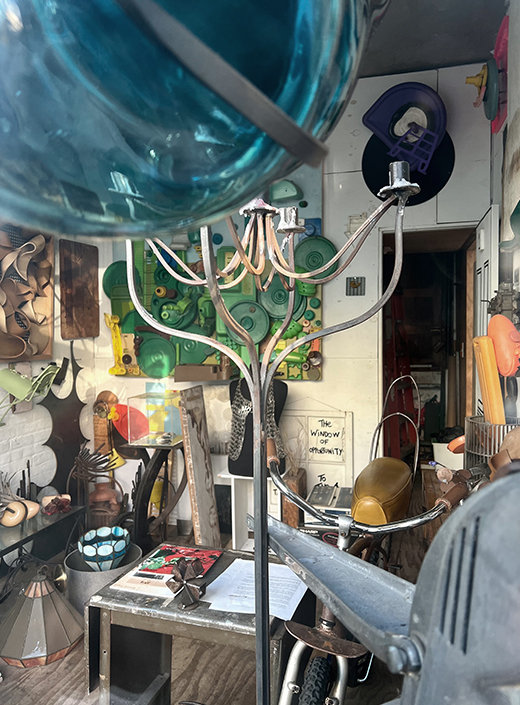 A gallery in Bushwick

Maria Hernandez Park is an important landmark in Bushwick. Located near Jefferson St, this municipal park used to be called simply Bushwick Park. It was later renamed in honor of Maria Hernandez, a Bushwick resident who was murdered after organizing block parties and community gatherings to kick drug dealers out of her neighborhood. You can study the evolution of Bushwick through its park and streets. Artists and activists can help change their local community for the better.

You shouldn’t be expecting any special experience when visiting Bushwick. Instead, try walking up and down the streets and just soaking it up. Check out the murals and take a coffee break at a nearby café. Go for a stroll and stop by for a taco. Then you can go shopping at vintage shops or visit a gallery. And along the way, you’ll run into some of the coolest and charming people in New York today.

Car, the Garden and Oh Hyuk sang these words on ‘Bushwick.’
“Yeah, back then, I went there without thinking. I keep thinking about those days now.” 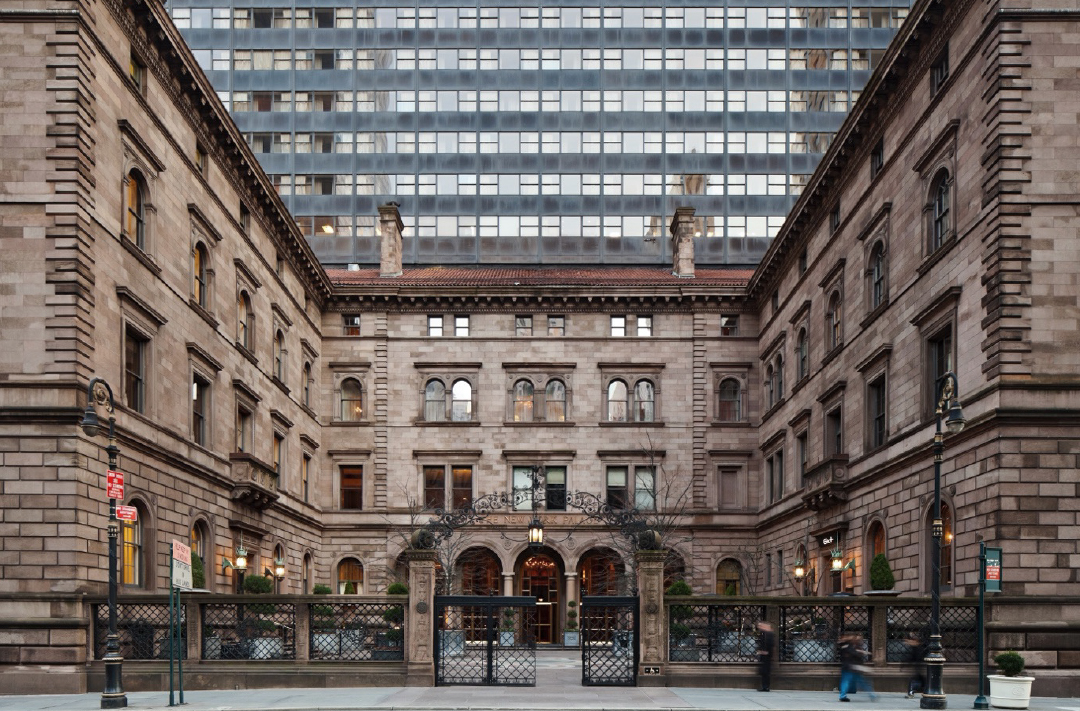