Only Music
We recently paid a visit to Concino Concrete Concert Hall, which has quietly become a hip place. Anyone can discover a new world of music there.
The ultimate objective for an audiophile is to play something through speakers that is as close to live sound as possible. People will reach that point if what they started as a mere hobby has evolved into a major part of their life. The French filmmaker Francois Truffaut once said that the final stage in three steps to falling in love with films is to make one yourself. Korean directors Bong Joon-ho and Park Chan-wook are living examples of that. Concino Concrete represents a dream come true for its owner, Oh Jung-soo, and his wife. Oh had been collecting audio equipment for over 30 years and that hobby of his gave birth to this concert hall. 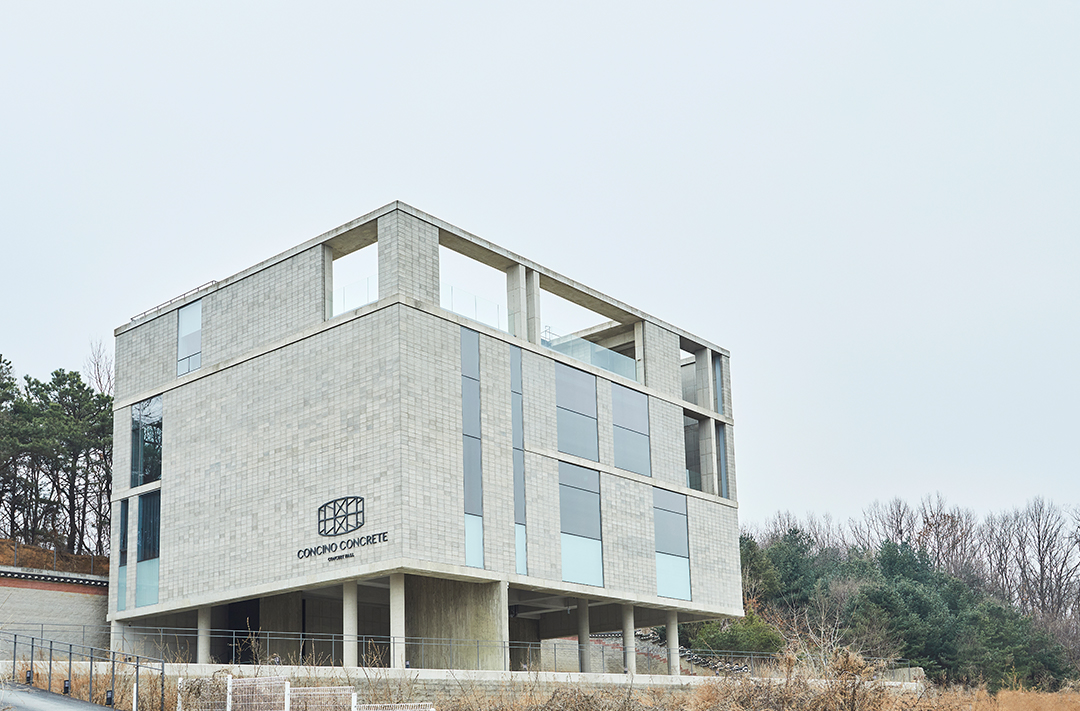 The exterior of Concino Concrete, designed by architect Mihn Hyun-jun.

Highly Personalized
Concino Concrete is located in Paju, Gyeonggi Province, about a 50-minute drive from LOTTE HOTEL SEOUL in Euljiro, central Seoul. The concert hall sits close to Heyri Art Village, and on a clear day, you can see parts of North Korea across the Imjin River. After driving past a stretch of road with barbed wire fences, Concino Concrete and its neighborhood may seem to be some mysterious place not of this world.
Concino Concrete’s exterior, featuring exposed concrete, was designed by the architect Mihn Hyun-jun, a former winner of the Presidential Prize at the Korean Architecture Award.
The grey, box-shaped building stands tall and proud, as if it is looking out toward the Imjin River. Piloti columns on the ground level lift the building to create parking space. The listening halls are located on the second and third floors. Music will reach you as soon as you get off the elevator. Antique furniture and turntables will greet you. 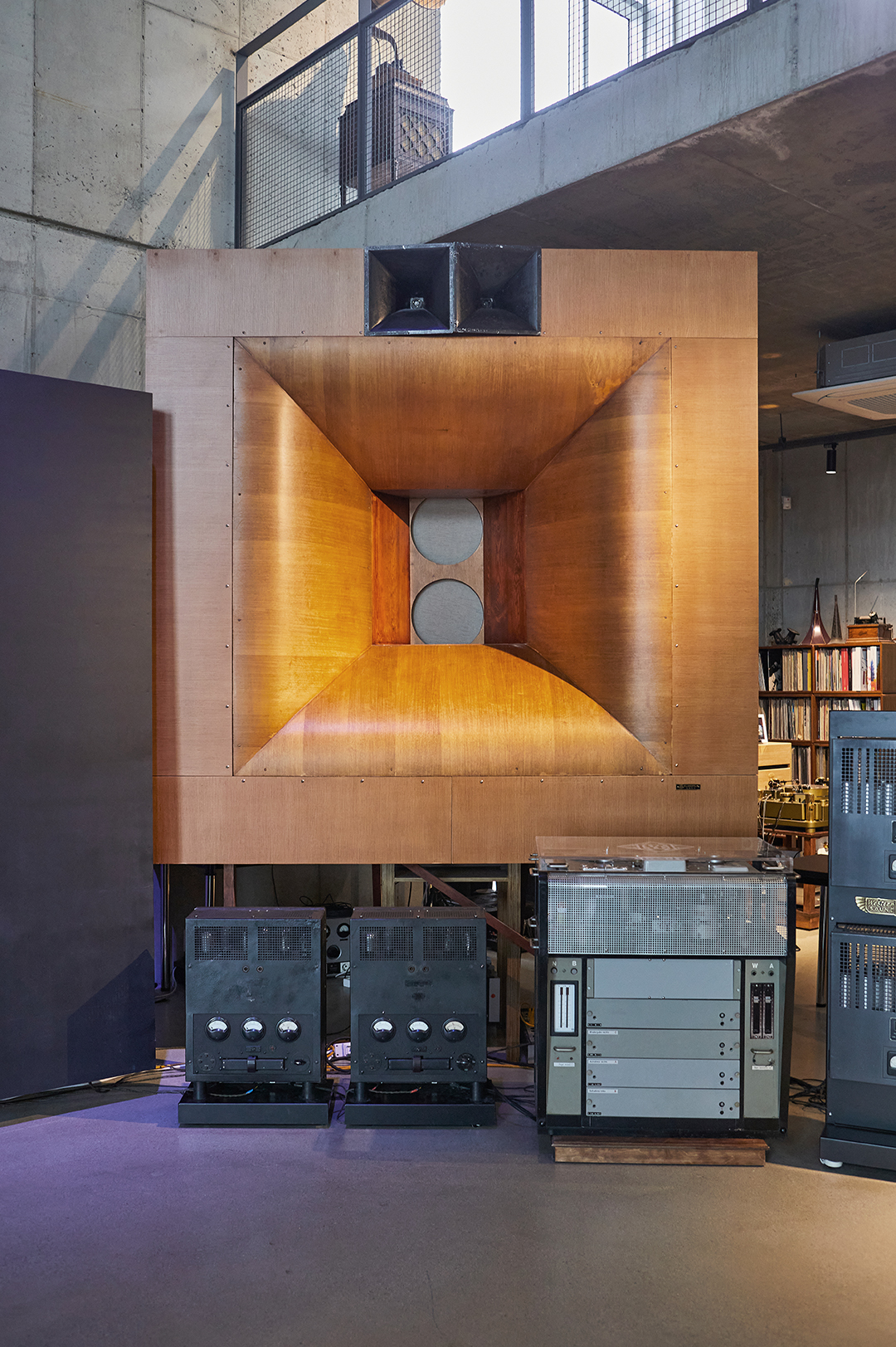 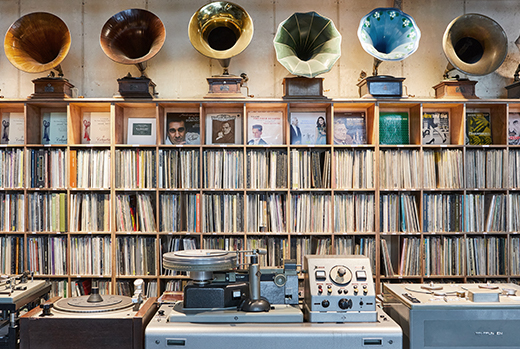 You will find gramophones of several different designs and numerous jazz and classical records. 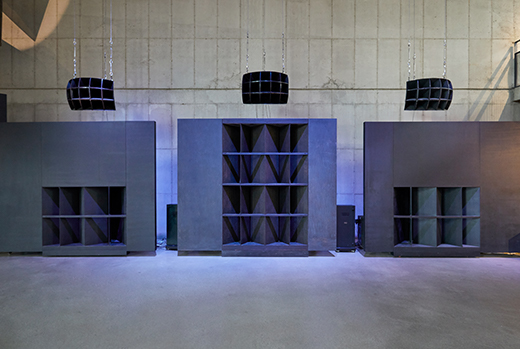 Western Electric M2 and M3, made in the United States

Once inside the hall, five speakers, each taller than average person, will tower over you. In the middle are Western Electric M2 and M3, next to Klangfilm Euronor Junior. Each speaker is connected to different amps from Western Electric and Siemens, an arrangement designed to ensure optimal sound. Players are from Thorens Reference and EMT, among others. Most of them were manufactured in the early- to mid-20th century. They are all considered the cream of the crop, and Klangfilm speaks, in particular, are treated with the kind of reverence typically reserved for cultural heritage.
Countless vinyl records are stacked in shelves behind these amps and players. They are mostly jazz and classical music, with few, if any, Korean pop music. On top of these shelves are vintage turntables. If you didn’t look anywhere else inside Concino Concrete, the place may seem like a music museum. 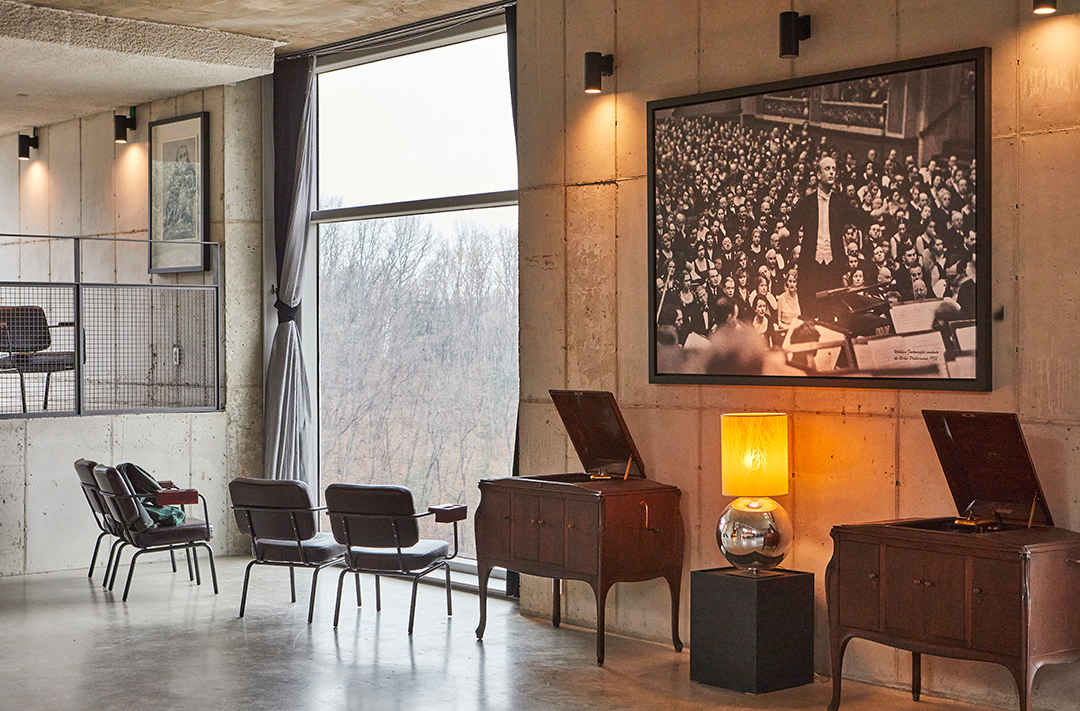 At Concino Concrete, you can listen to music and enjoy spectacular views at the same time.

Open Space, with Beautiful Music Coming from Everywhere
The exterior of Concino Concrete is best characterized by exposed concrete. Inside, the ‘openness’ is the one defining feature. The area is divided into the main performance hall and seating area on the second floor, and more viewing section on the third floor. You will find dozens of chairs in the main hall, and the seating area also has chairs neatly arranged toward the performance space. The setup resembles that of a typical concert hall. You can also take in views of the surrounding areas by grabbing seats by the windows.
It’s a wide open space, and each floor has its own characteristics and serves its own purpose. For instance, the seats near the left balcony on the second floor are tilted toward the performance hall, and people would go there to listen to music, above all else. On the right side, chairs face the windows, and visitors to that particular section would enjoy the scenery instead of looking at the main hall. The narrow staircase connecting the first and second floors has floor-to-ceiling windows on the front and on the side. They help let warm sunlight into Concino Concrete. When some beautiful string music plays in the background as you soak in the natural light, there is no better place to be.
Be it along the stairs, in front of the elevator or walls, you will spot pieces of antique furniture and posters for popular films such as and , as well as posters autographed by popular musicians. Oh has his fingerprints all over Concino Concrete. 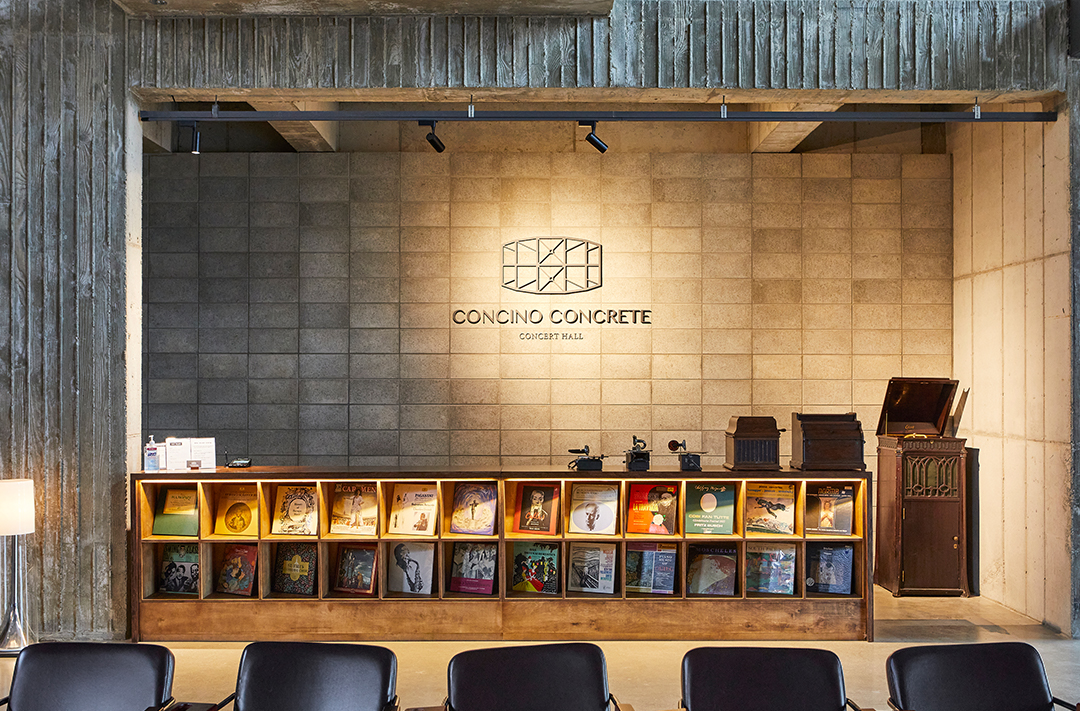 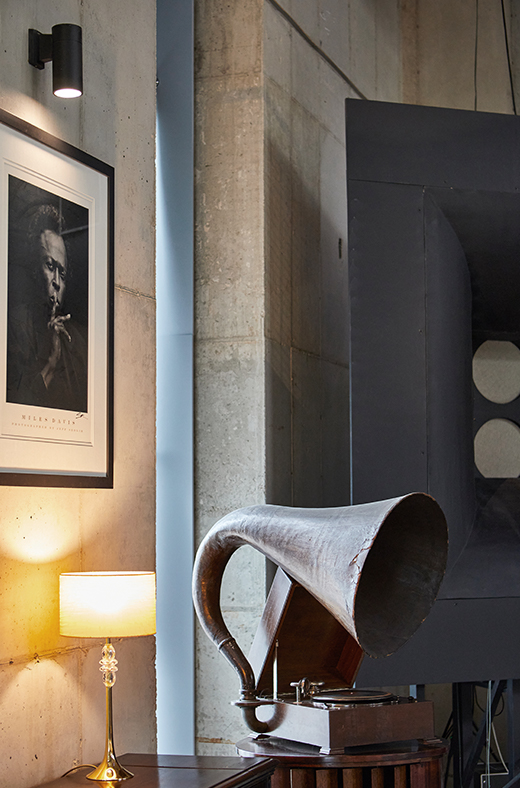 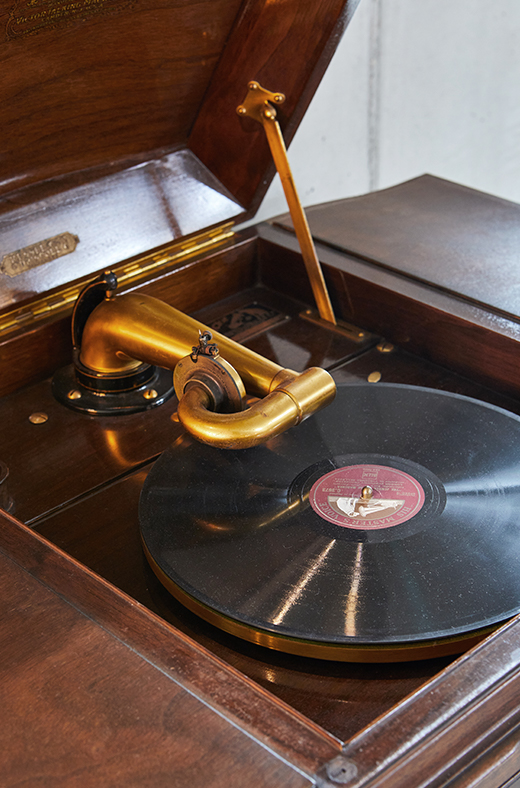 Accessories for music are also on display at Concino Concrete.

Come for Music, Stay for Space
We grabbed our seats to listen to music. On the day of our visit, Klangfilm Euronor Junior speaker was playing music. Concino Concrete does not take requests for songs. They choose the audio equipment for a given day based on atmosphere, music and overall conditions of the system. On an afternoon just after the rain had stopped, the sweet spot inside Concino Concrete is the center of the main hall. Billie Holiday’s ‘My Man’ was playing. Holiday’s husky voice sounded like a perfect fit for the vintage audio system. But symphony sounded even better than jazz. To the right of the seats in the hall, the cover for the album being played at the moment is on display. Beethoven’s Symphony No. 6, or the ‘Pastoral Symphony,’ as performed by Erich Kleiber with London Philharmonic Orchestra was now being played. The natural sound of the strings floated through the air, and made us feel as if we were sitting in the middle of a concert hall. Obviously, this wasn’t an actual performance, but it was easy to tell Concino Concrete is committed to creating a sound as close to it as possible. 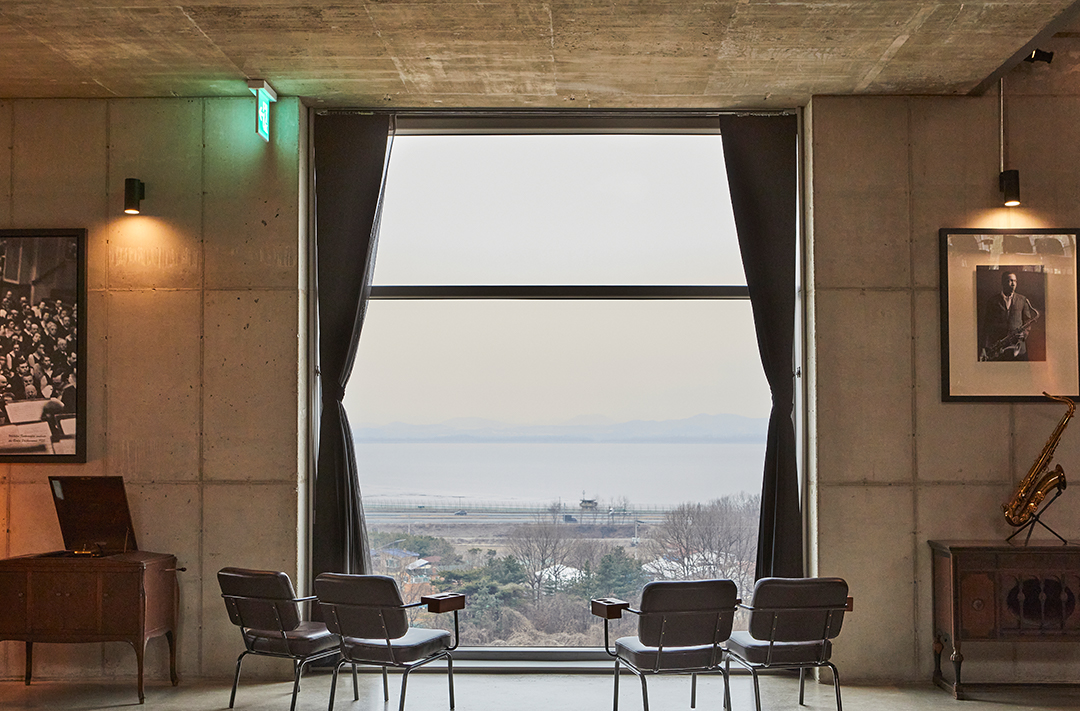 On a clear day, you can get a glimpse of the Imjin River and Mt. Songak in the North Korean town of Kaesong.

People were enjoying themselves in different corners of the second floor. The Imjin River and Mt. Songak were part of a breathtaking view out the windows. When you add in music, Concino Concrete may be a great place for meditation. It was also fascinating to discover that each floor and space offered different types of sounds from the same piece of music, not to mention different views. The sound heard from the central balcony on the second floor was just as spectacular as the one heard on the first floor. It was a shame that no seating was available in that area.
You can’t request any music, and all you get for an admission fee of 20,000 won is a bottle of water. No one will give you any rundown on audio equipment or records as music is being played. Some visitors may find the whole experience somewhat lacking. But there are those who still come from far away for that very experience. Why would that be the case? Maybe they want to experience something that they wouldn’t get to anywhere else.
The audio system at Concino Concrete is truly one of a kind. It’s nearly impossible to see Western Electric and Klangfilm speakers, some of the finest pieces from the early 20th century. And getting these antique pieces to work properly requires some expert skills.
In the 21st century, it’s about selling experience. People are always thirsty for new experience, and they travel around the world and visit strange places to quench that thirst. Concino Concrete is a highly personalized space. The owner’s decades-long hobby in audio has been turned into such a wonderful place, with help of architecture. Come for the music, and stay for the space: that’s how Concino Concrete can be summed up.