Act. On Streets, and in Galleries!
Shepard Fairey, who has pushed street art into the mainstream art market, will have an exhibition at LOTTE Museum of Art. It’s an opportunity to appreciate the positive influence that art can have.
“Art can be a vehicle for peace and justice. It can also pose questions about abuse of human rights or power.”
Shepard Fairey, in an interview with Korean media in 2016 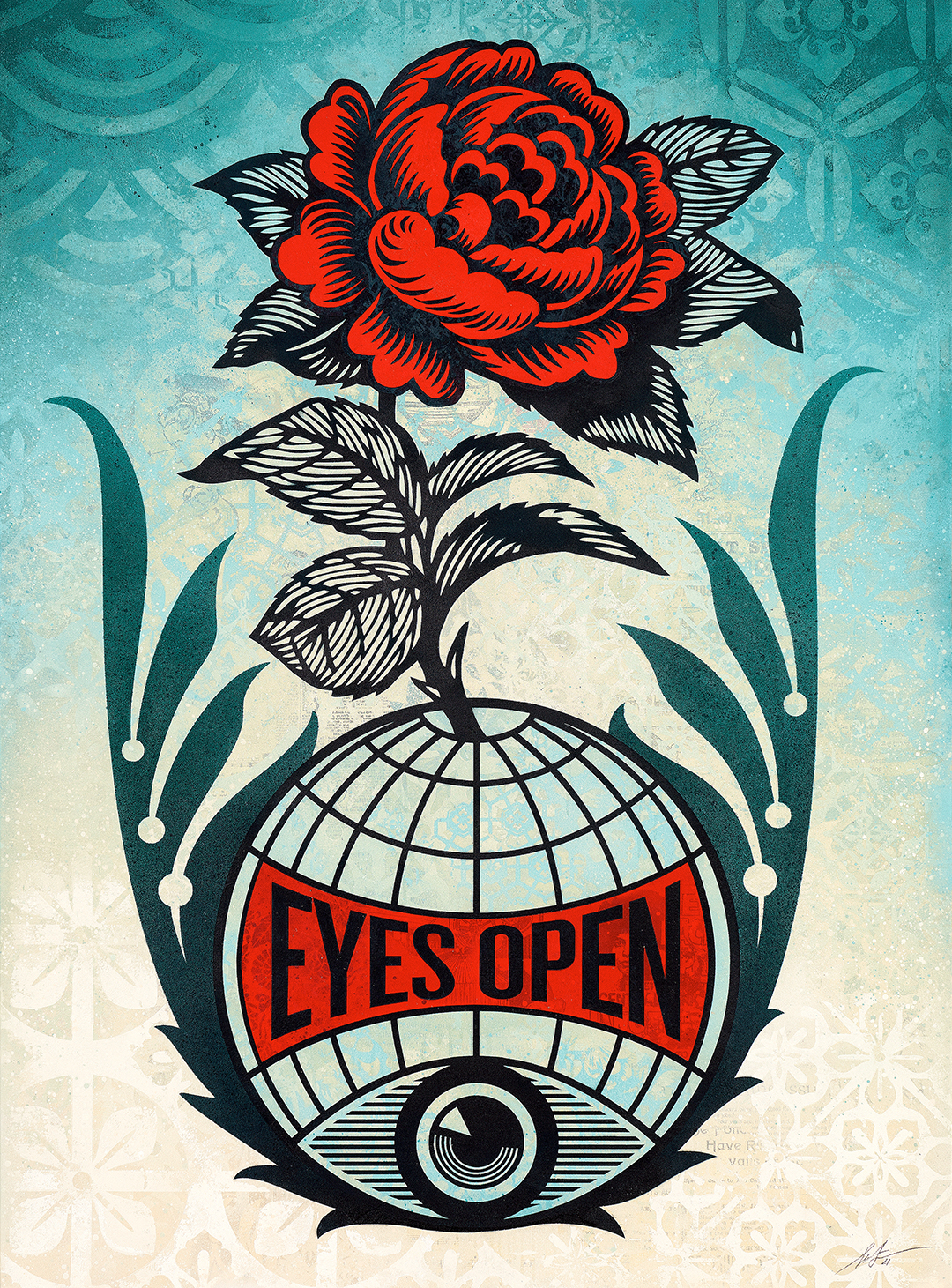 Peace, justice and environment. These are some of the most popular topics for artists. But it isn’t always easy to express these ideas so effectively that it would encourage participation and solidarity. And Shepard Fairey is that rare, influential artist who can rally the public with his messaging. Fairey, who calls himself a “visual communicator,” is also someone who can translate his popularity into positive social influence. 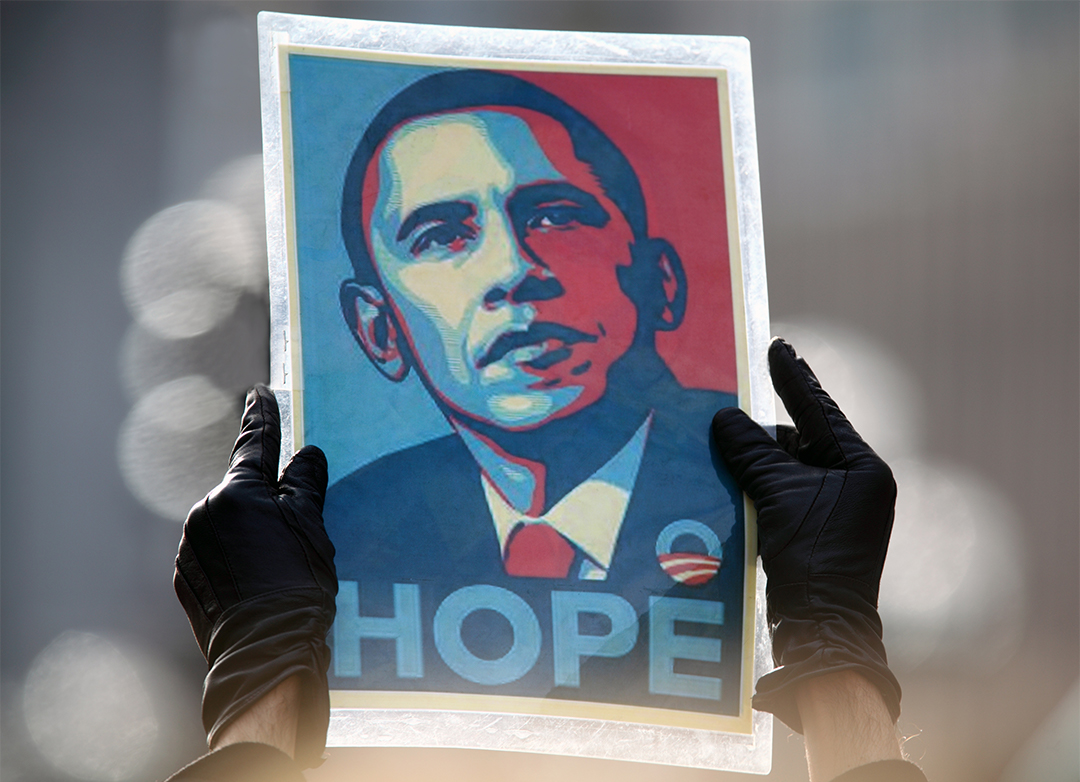 Obama’s HOPE
It is not such a strange occurrence to find street art in a gallery. Basquiat and Banksy have been among street artists who conveyed their messages through drawings and paintings. They all used different materials and techniques, but they all wanted to deliver the message of solidarity, political correctness, peace and justice. Shepard Fairey is at the forefront of that movement today. 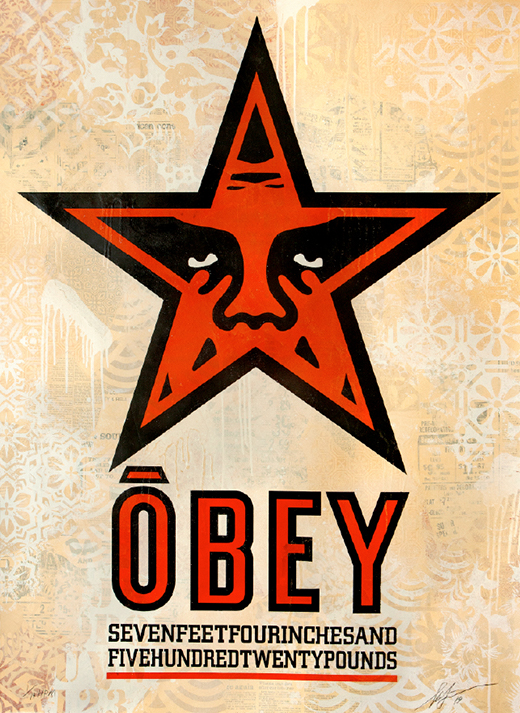 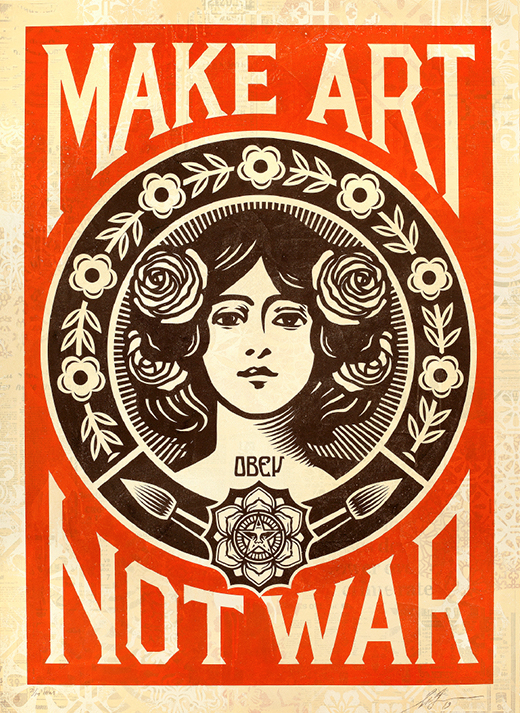 Fairey entered our consciousness by making the famous “HOPE” poster for then Senator Barack Obama during his presidential campaign. An Obama supporter, Fairey produced the posters and put them up on streets on his own. The stenciled work became the most popular among all campaign posters for Obama in 2008 and came to be seen as a symbol for the candidate’s message. 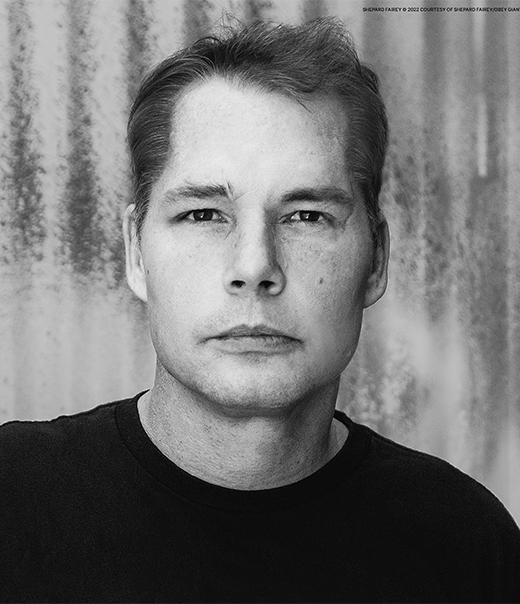 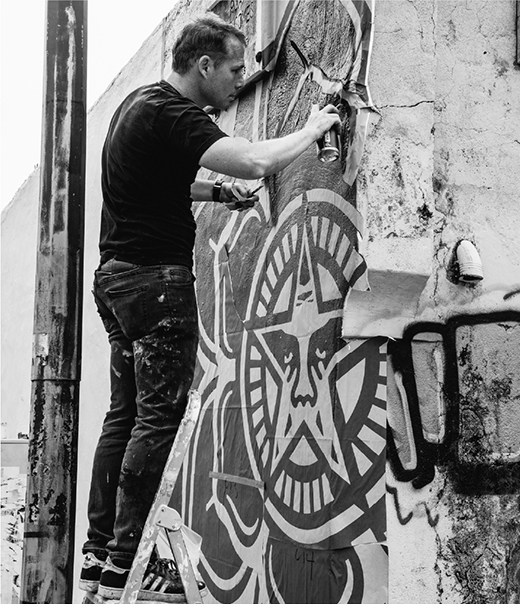 “I've never really considered myself just a street artist. I consider myself a populist” 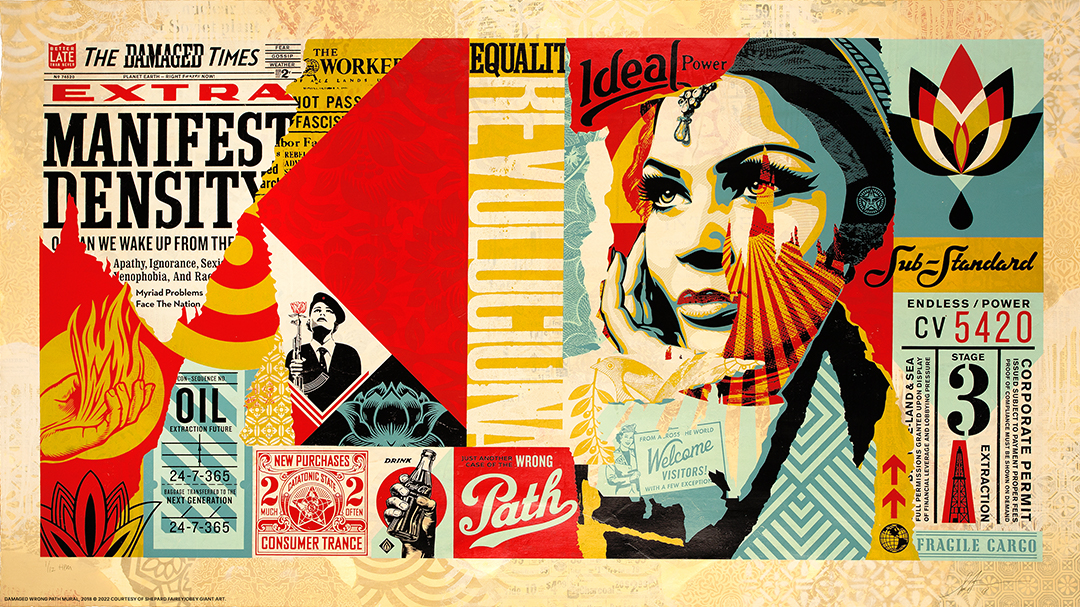 Expanding the Message
Born in Charleston, South Carolina, in 1970, Fairey majored in illustration at the prestigious Rhode Island School of Design.
While at college, Fairey came across the portrait of Andre the Giant, the legendary French professional wrestler, in a newspaper. And by copying a mug shot of the wrestler using black-and-white stencil technique, Fairey created the sticker titled “Andre the Giant Has a Posse.” The sticker became a hit among skateboarders and graffiti artists, and eventually found its way to many cities across America. In 1990, this sticker evolved into the “Obey Giant” campaign, which was an experiment in phenomenology designed to inspire reaction and curiosity from people. Fairey continued to produce posters and stickers containing social messages, ‘HOPE,’ the poster depicting Obama during his presidential campaign, represented the pinnacle. Fairey founded his own clothing company, Obey, as an extension of his street art. His influence kept on growing. 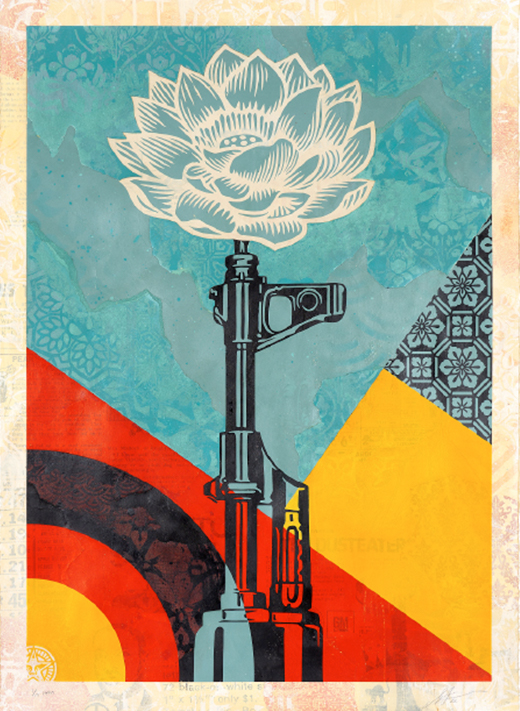 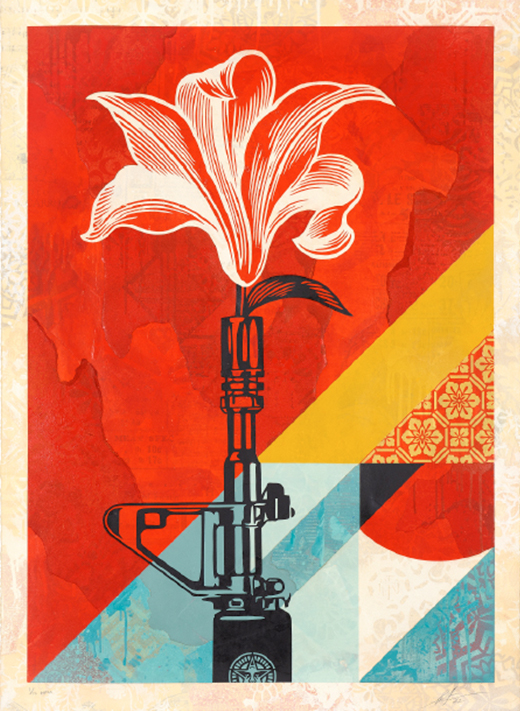 Fairey puts messages of peace, justice and environment on the silkscreen for posters and stickers, and he values communication between art and its audience more than anything else. Fairey’s posters of portraits, featuring stark contrast of colors and complementary color effects, have drawn comparisons to socialist, propaganda posters in Vietnam or China dating back decades. However, the message expressed by the combination of clearly defined words and powerful imagery resonates deeper than any propaganda can.
Fairey is currently based in Los Angeles, working on a number of different projects. 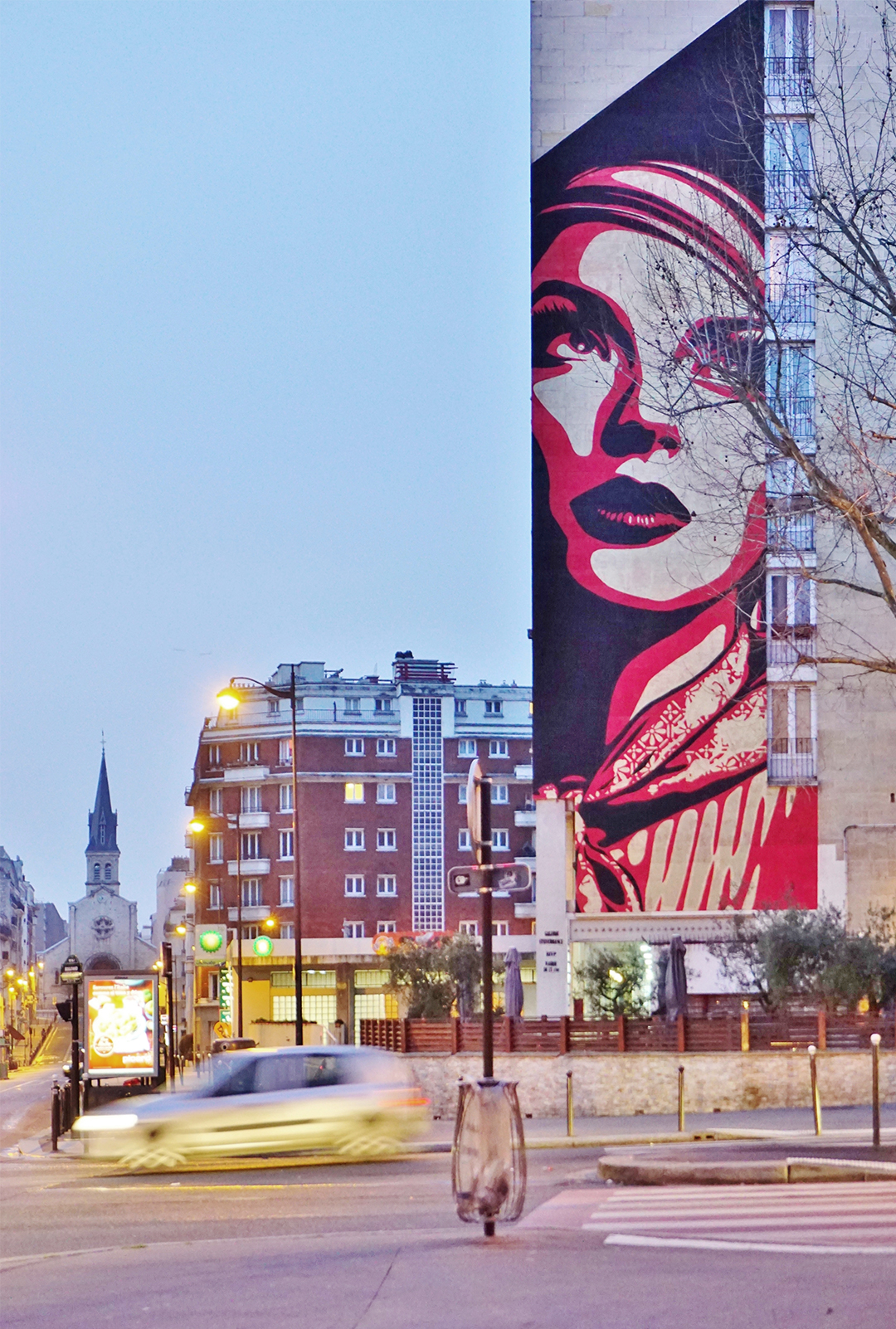 Exhibtion at LOTTE Museum of Art, Eyes Open-Minds Open
Fairey’s works can be found in collections at Los Angeles County Museum of Art, Victoria and Albert Museum in London, and San Francisco Museum of Modern Art, among other places. Fairey has also worked on public art projects in major cities around the world.
Fairey is no longer just an artist with a message to deliver; his work is now considered a cultural code. And his exhibition, titled “Shepard Fairey/EYES OPEN – MINDSOPEN,” opened at LOTTE Museum of Art inside LOTTE Tower in Jamsil, southeastern Seoul, on July 29. It is one of the largest art exhibitions in Korea. It encompasses Fairey’s early works, produced when he was trying to bring street art into the mainstream without leaving it on streets, and also his latest pieces. Some 300 of his finest pieces are joined by two new murals.
The message from Fairey’s artworks is simple: “Act!”
Fairey’s exhibition, displaying the artist’s unconstrained and yet firm philosophy, will run through November. 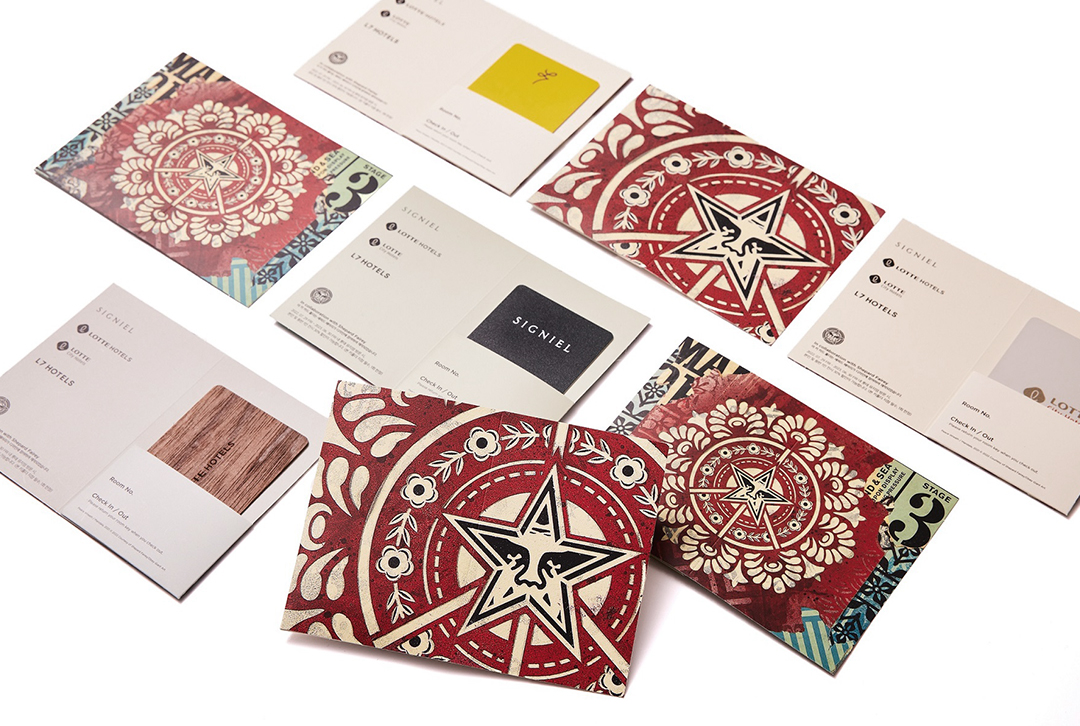 Additionally, LOTTE HOTEL has designed a custom key card holder via collaboration with Shepard Fairey. Various decorative elements are laid out in circular shapes with the iconic image of Obey Giant inside a star in the center of the card holder. It will be available for purchase at 15 LOTTE HOTEL chain locations across the country, including SIGNIEL SEOUL, LOTTE HOTEL SEOUL and  WORLD, L7 Hongdae, Gangnam, and Myeongdong, and LOTTE City Hotel Mapo and Gimpo till the end of this year.  Any hotel customer with the key card holder will be offered a 30-percent discount for the admission of themselves and a guest at all LOTTE Museum exhibitions.
[Shepard Fairey / EYES OPEN – MINDS OPEN] Exhibition 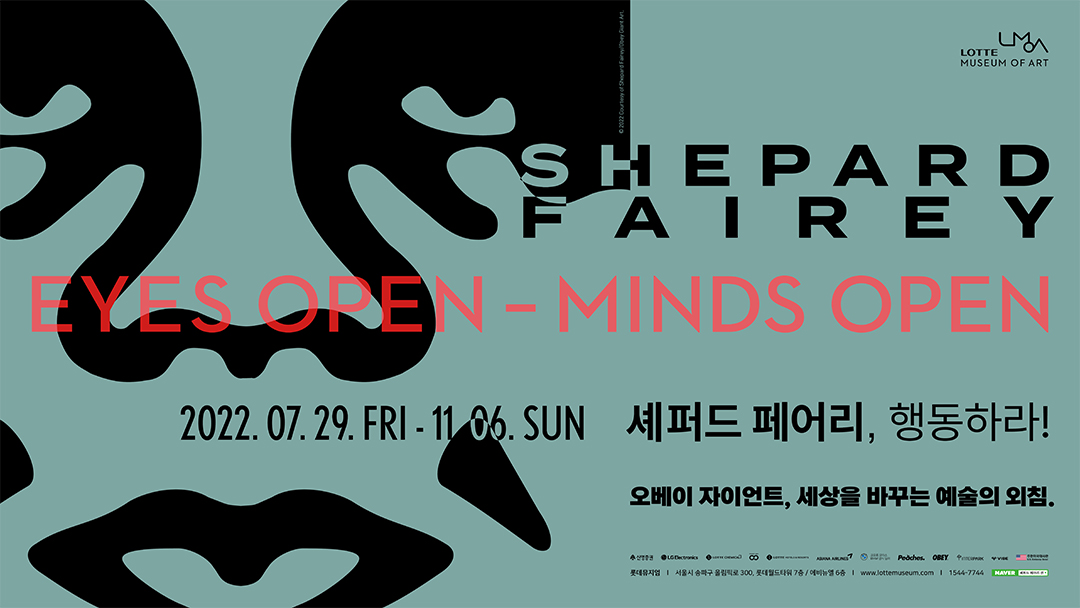