Encounter with Art on Staycation
Hotels provide a space for the contemplation of culture. SIGNIEL SEOUL and BUSAN are drawing the attention of customers by bringing in artworks by various artists.
Instead of simply being a ‘place to stay overnight,’ hotels are being redefined as a ‘place to contemplate’ and share special cultural experience. Recently, more hotels are joining the trend by way of presenting their own collection of artworks. 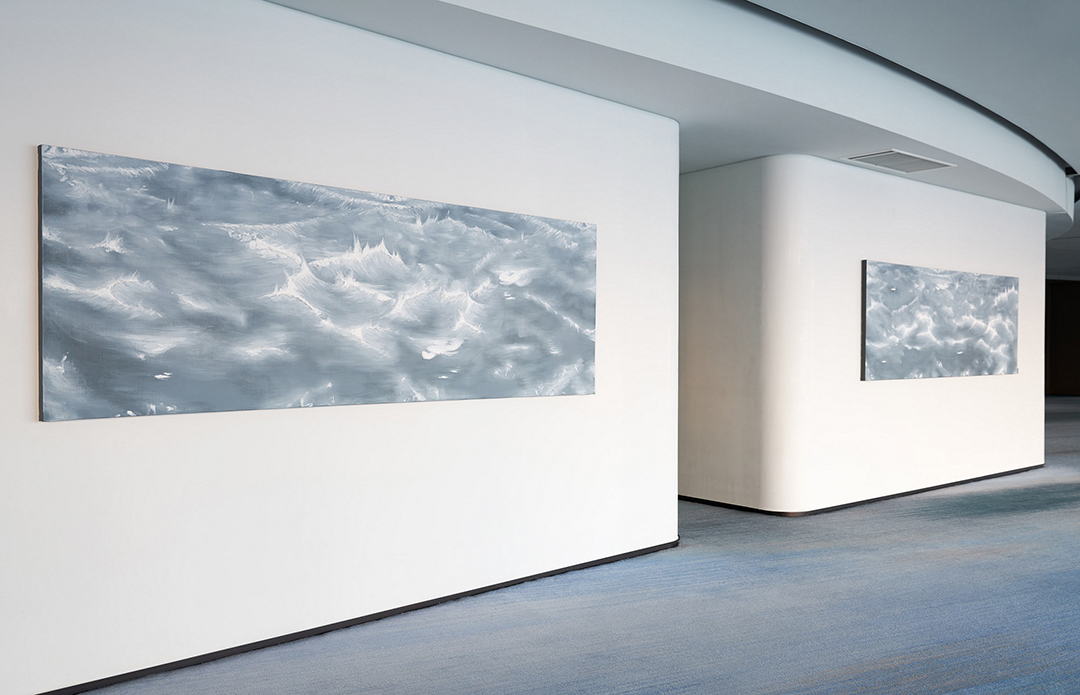 Global Hotels with Art Collection
There are quite a few examples of hotels around the globe using art collections as a means to engrave new images of their brands on the minds of customers. The Bellagio hotel in Las Vegas has famously succeeded in promoting its ultra-luxury hotel image by exhibiting masterpieces by artists such as Van Gogh, Matisse, Cézanne, and Monet, in the hotel. Its lobby ceiling is also covered with 2,000 glass flowers hand-blown by famed artist Dale Chihuly. Restaurant Picasso has several works by Picasso on display.
The Byblos Art Hotel Villa Amistà was directed by Italian designer Alessandro Mendini and is full of objects that draw your attention with vivid colors and vibrant patterns. Likewise, the hotel exhibits art by Damien Hirst, Anish Kapoor, and Takashi Murakami in various parts of the building.
Known for decorating an entire hotel with a collection by a single artist, Art’Otel Köln has once featured Korean artist SEO(Seo Soo-kyoung) in its lobby and rooms. 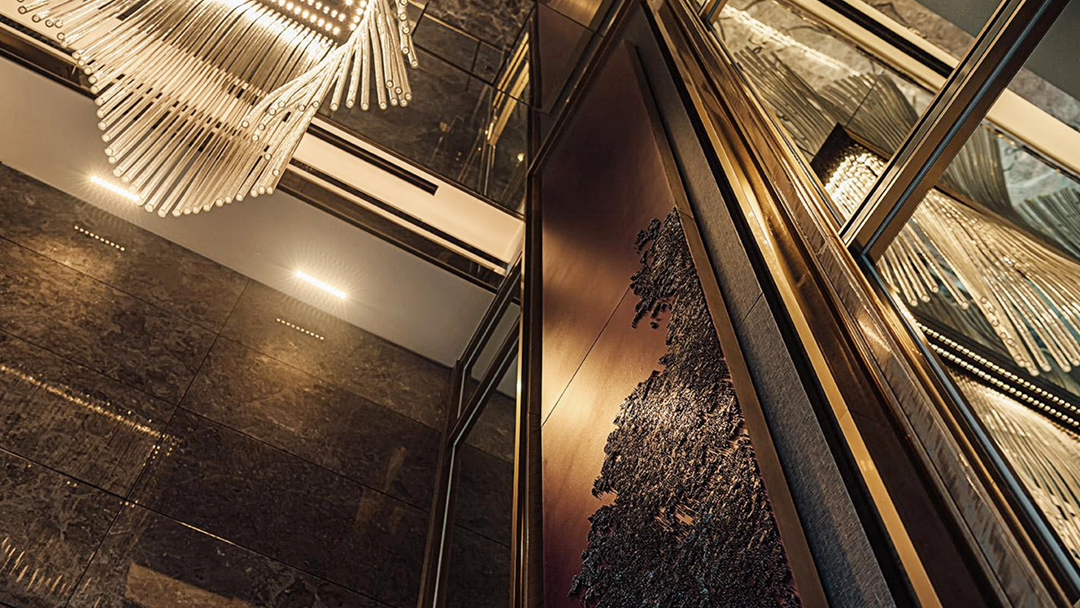 Hotel Becomes Art Gallery, SIGNIEL SEOUL
In Korea, SIGNIEL hotels have collections that stand out the most. SIGNIEL SEOUL, famous for its scenic location, has diverse contemporary art pieces installed across the hotel.
Stepping into the overwhelming, 8m-tall welcome gate at SIGNIEL SEOUL and before going up to the Main Lobby on the 79th floor, you will see artist Yoo Bong Sang’s work right up ahead that has a similar scale to the gate itself.
The mural describes a beautiful forest under rays of light by using shade created by the red-toned background and shiny nails. The entire canvas is covered with nearly 150,000 nails and headless pins from a tacker. One way to appreciate the giant artwork is by focusing on subtle differences the image gets when viewed from varying perspectives. 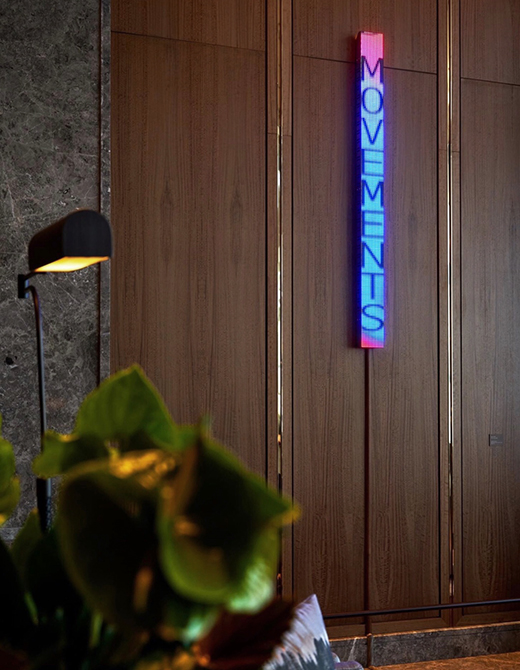 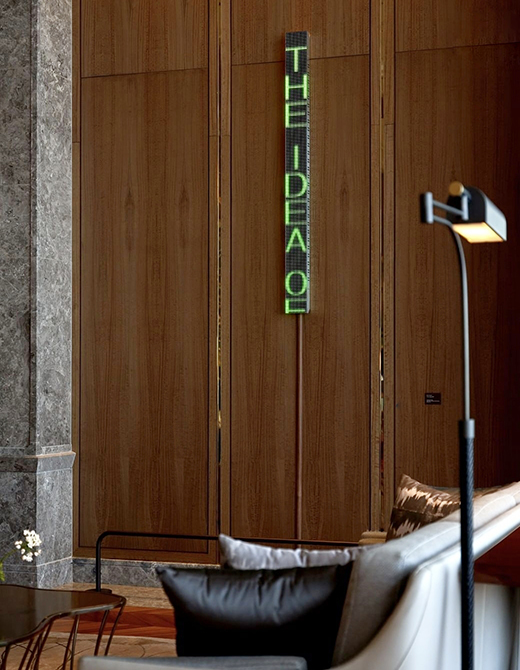 After boarding the super speed elevator, you soon arrive at the Main Lobby to find glowing messages with a modern and philosophical twist vertically shown on the wall facing the check-in counter. It is ‘True Living’ made by Jenny Holzer, the first female artist to represent the American Pavilion at the Venice Biennale and recipient of the 1990 Leone D’Oro for best pavilion. Holzer relied on language as the most important means of communication in her art. She uses various media, ranging from ordinary objects to LED electric signs and architecture, for the delivery of her messages. The one at SIGNIEL SEOUL’s lobby is shown on an LED electric sign. The slow-moving words about the meaning of life and its recognition is an experience comparable to someone citing a poem right next to you, according to the spectators. The message roll continues for 13 hours. 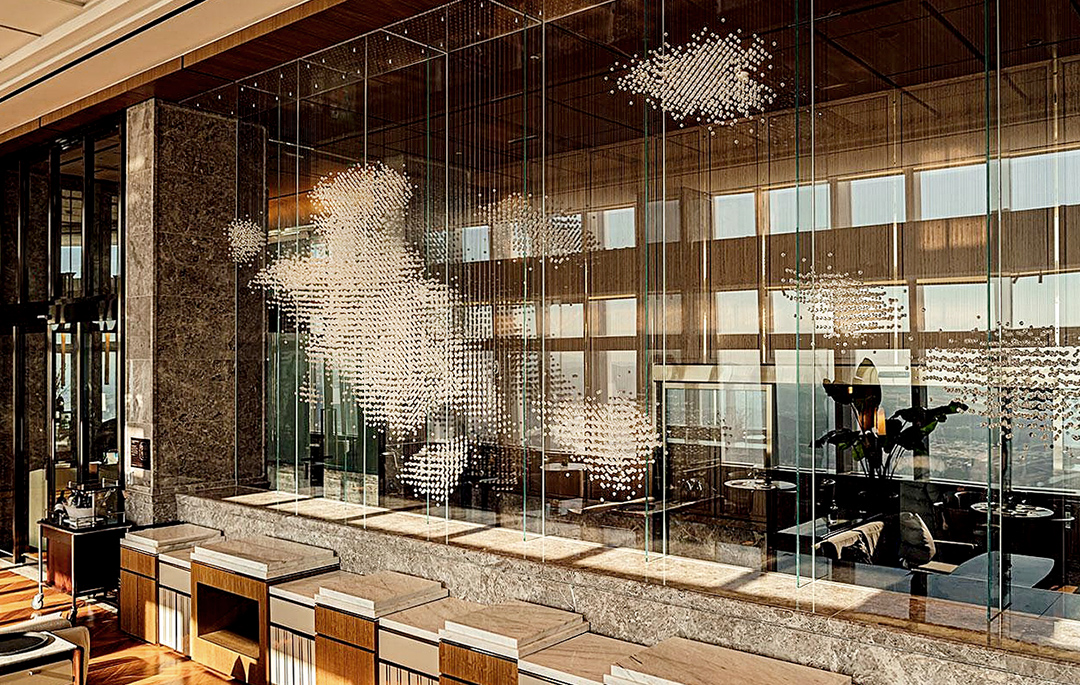 Between the 79th and 80th floors, transparent crystal pieces swinging in the air and glistening in ample natural light surround the stairs, creating a sophisticated harmony with SIGNIEL SEOUL’s ‘castle in the sky’ design concept. 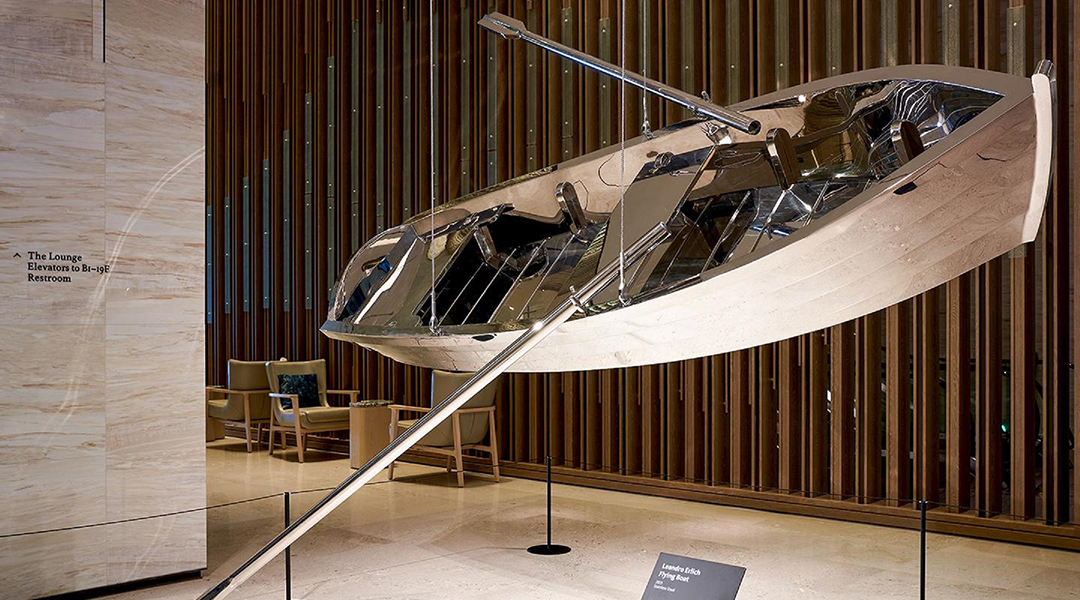 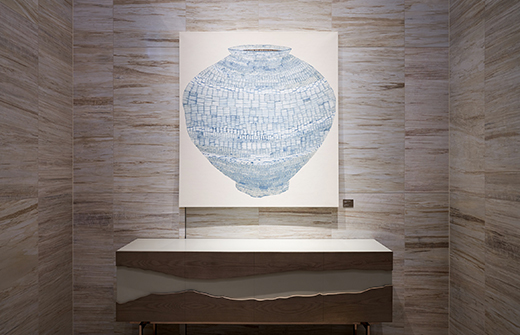 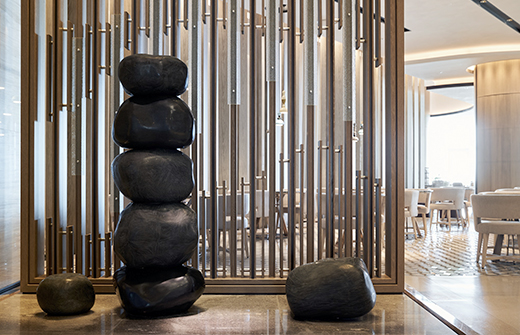 Art Blends with Haeundae, SIGNIEL BUSAN
You can experience the classy elegance of luxurious SIGNIEL BUSAN, made complete with its artwork collection. The first sight that catches your attention is in the lobby. There’s a boat floating not in the water but in the air. It is ‘Flying Boat’ by Argentine conceptual artist Leandro Erlich that was brought to the hotel for display in March.
What stops you after the boat is a pile of mysterious, majestic stones. It is ‘Engrave-氣’ by artist Kim Hee Yong. Massive stones weighing about 100kg each are assembled into a vertical line as if depicting a stone tower, while a couple of lone stones sit on the ground quietly, drawing a sharp contrast.
In addition, there is ‘Monologue,’ a realistic yet dreamy painting by artist Yun Weedong who pursues hyper realism and values of Oriental art. Artist Kim Bo-yeong’s Moon Jar, created by sticking pieces of naturally-dyed hanji paper layer after layer, is also on display in the lobby. Ethan Park’s ‘Wave’ fills the canvas with dynamic and rhythmic movements of the fierce wave, in an homage to SIGNIEL BUSAN located in Haeundae