To Anyang, City Built on Public Art
Walk through Anyang Art Park, and you may just run into pieces by famous Korean or international artists.
Gyeongsu Industrial Expressway, connecting southwestern part of Seoul to Suwon, is one of the busiest sections of the National Route 1. It goes from Seoul through Anyang and to Gunpo and Suwon.
Anyang Amusement Park at Gwanaksan once sat near Gwanak Station on subway Line No. 1, the starting point for Anyang adjacent to Seoul’s southwest. Anyang Pool first opened in that area in the 1930s, and by the 1960s, the park had become a popular holiday destination in the greater Seoul region. Records show that during peak summer seasons, the park attracted more than 40,000 visitors per day. As the popularity of the park dwindled, the place began to transform into Anyang Art Park, through the triennial Anyang Public Art Project, launched in 2005.
The park features Kim Chung-up Architecture Museum, along with a wide variety of sculptures, buildings and artworks set up in the woods. It’s a perfect place for those who want to enjoy art outdoors. 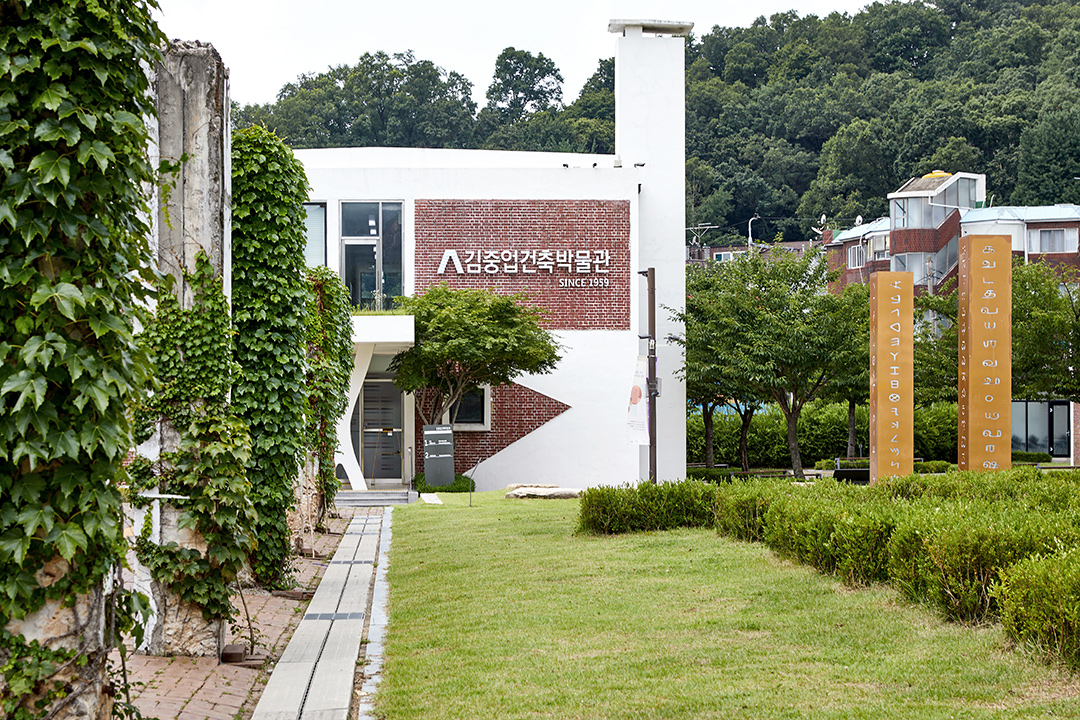 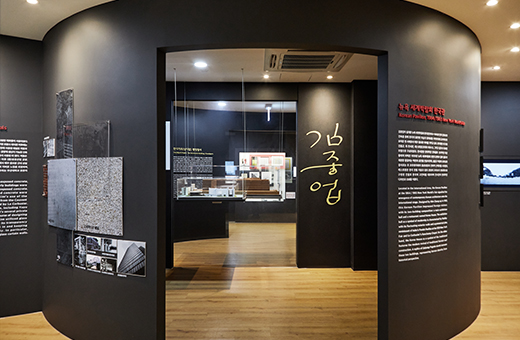 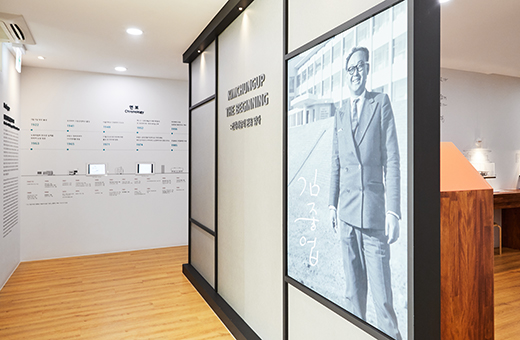 Discovering Kim Chung-up in Anyang
A visit to Anyang Art Park must start at Kim Chung-up Architecture Museum. The name may not be familiar to the current generation, but Kim Chung-up is one of the most important figures in modern Korean architecture history.
As a boy full of artistic sensibilities, Kim loved poetry and paintings. An art teacher once told him that architecture is one field of study that closely resembled both poetry and paintings. Kim jumped right into it. He studied architecture in Japan and moved to France in the 1950s to work at Le Corbusier’s studio, where he absorbed the most advanced architectural trends. Upon returning to Korea, Kim designed some of Seoul’s major landmarks, including the French Embassy, Samil Building, and the World Peace Gate. 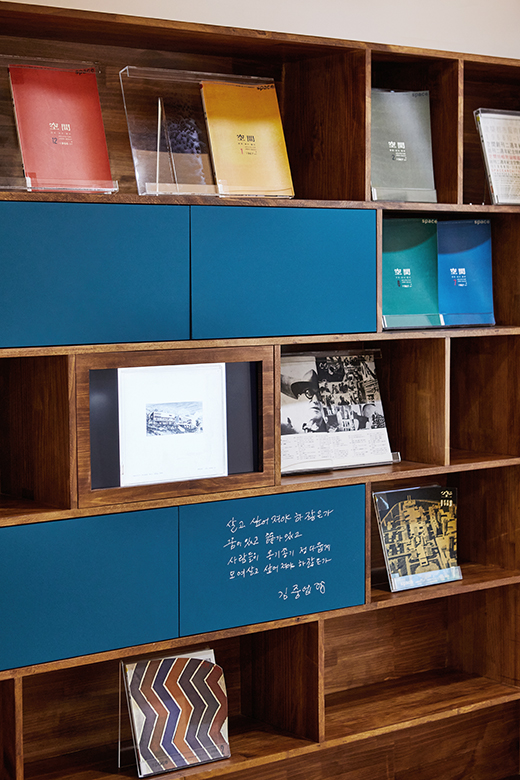 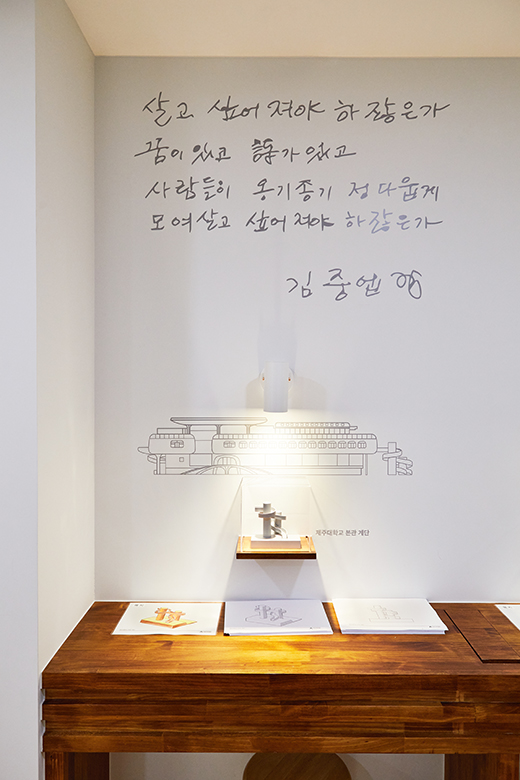 It is easy to trace Kim Chung-up’s love for architecture and his country all over the museum.

The museum is housed in a former factory of Yuyu Pharma Inc. Centuries before that, during the early days of Goryeo Dynasty, a Buddhist temple named Anyangsa, built on Wang Geon’s order, had stood there. The name of the city comes from the temple. Kim had designed the original factory in his early days back in Korea. It was an experimental project, whereby Kim sought to combine elements of architecture and sculpture. Of buildings that Kim had designed as factories for Yuyu, four have been repurposed, for Kim Chungup Architecture Museum and Anyang Museum, among others.
In the main hall of the architecture museum, you will get a look at Kim’s life and career, and his signature pieces of work. Across from the main building stands the special exhibition hall, which is currently hosting an exhibit titled . It’s the first immersive content exhibition on architecture in Korea, using digital media and advanced technology to shed new light on Kim’s architectural career. It will run through Sept. 25. 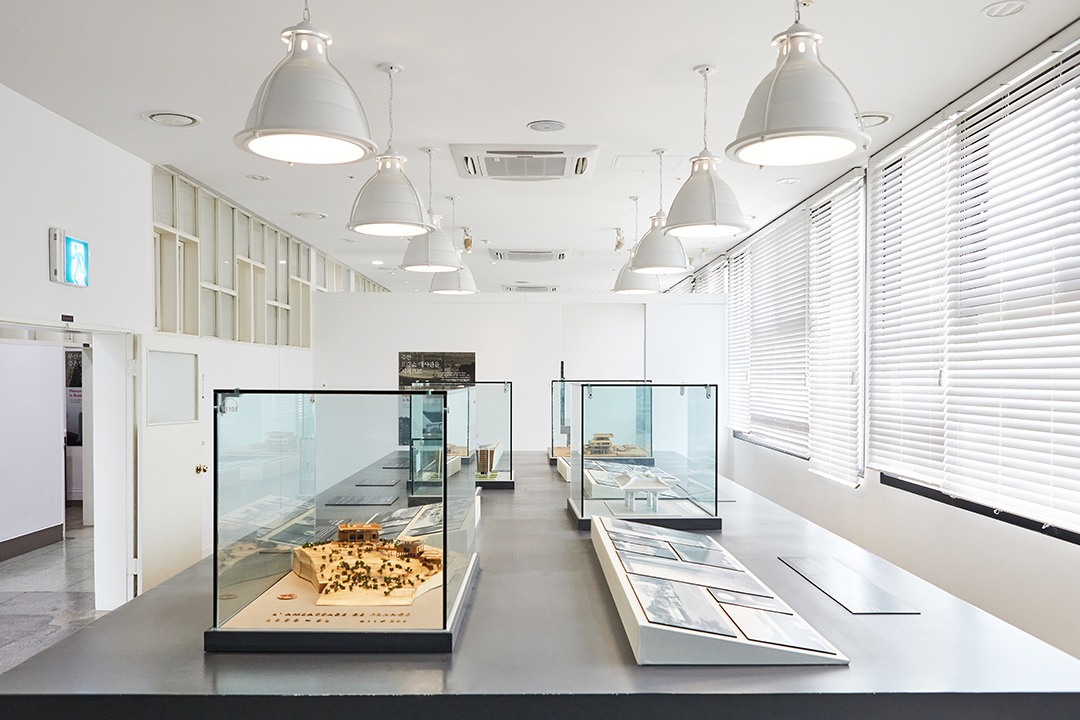 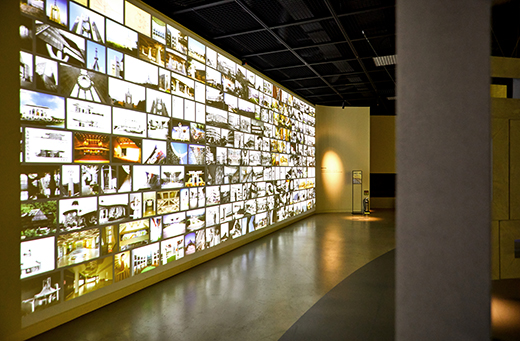 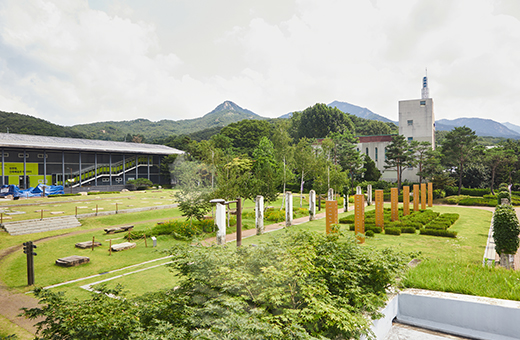 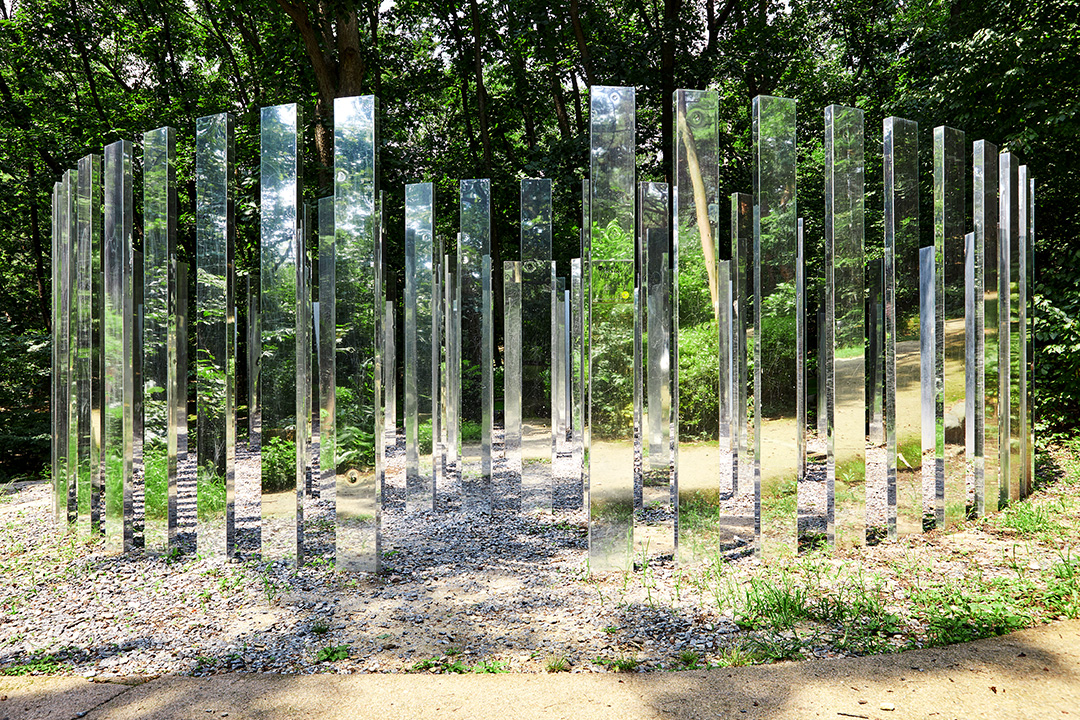 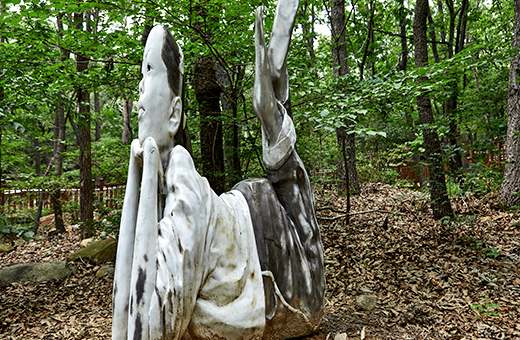 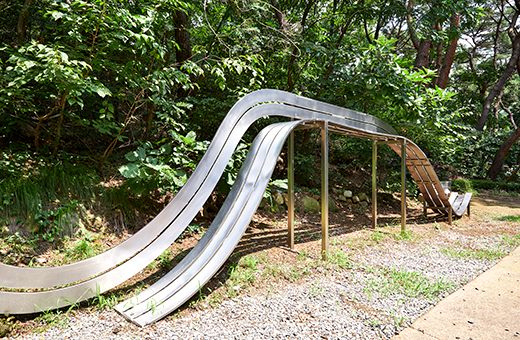 Works of Art Spotted Along Forest Path
Thanks to Anyang Art Park, Anyang has been dubbed the city of public art. There has been no other city that has been running public art projects and setting up installations for decades. The Anyang Public Art Project (APAP), run by the Anyang Foundation for Culture & Arts, takes place every three years. It introduces us to installations, sculptures, videos, and works of architecture and design by artists who draw inspiration from Anyang’s topography, culture and history. The list of architects and artists who have taken part in these projects is quite eclectic. Alvaro Siza, Acconci Studio (Vito Acconci) and Jeppe Hein have been among the well-known names. The popular Japanese architect Kengo Kuma submitted a piece of sculpture rather than designing a building. 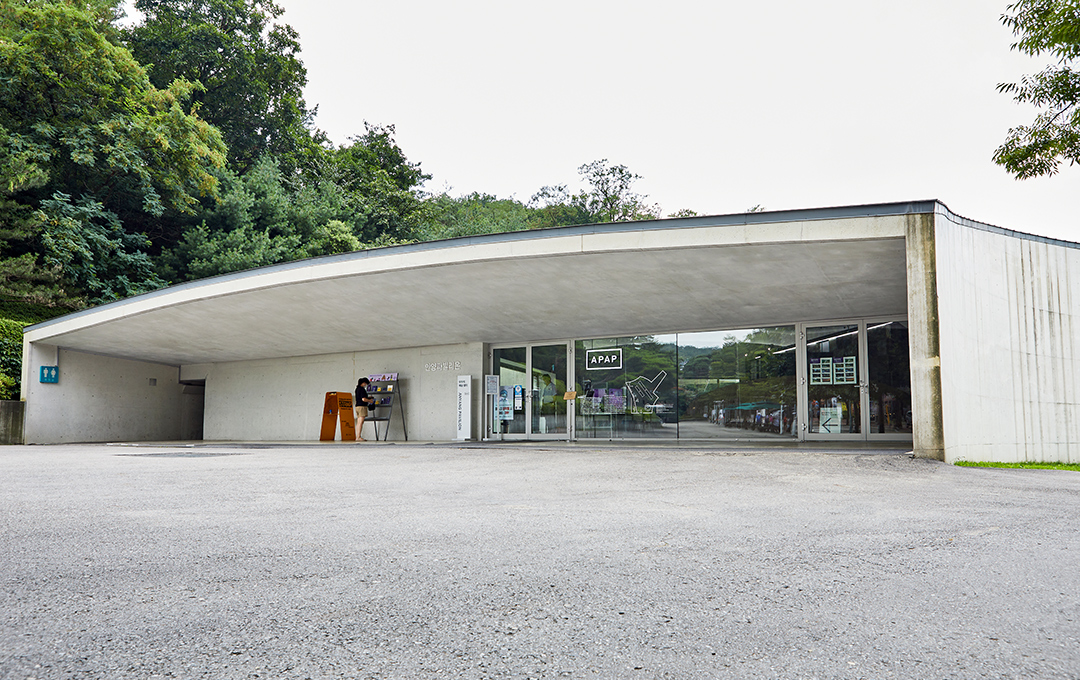 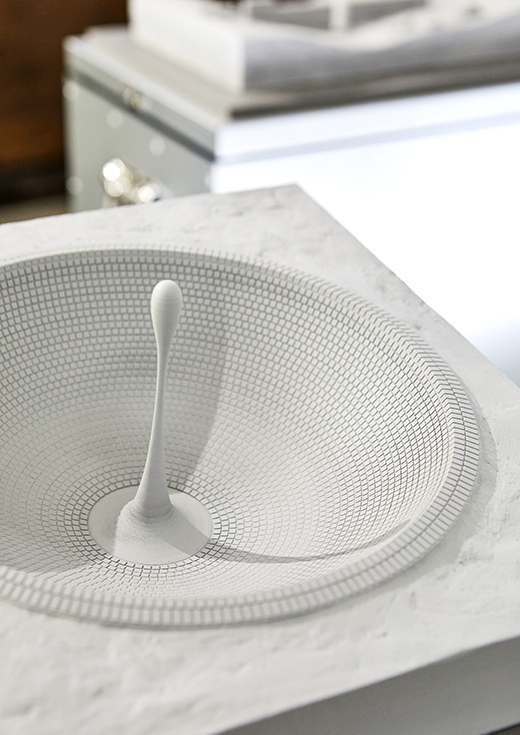 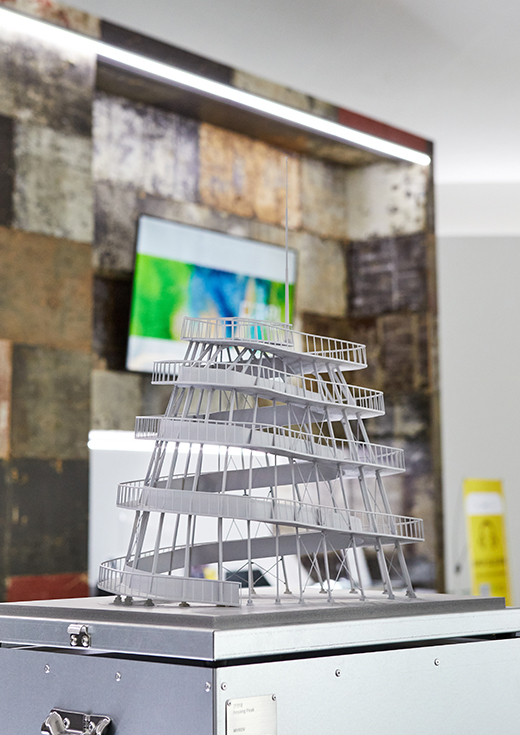 Inside Anyang Pavilion, replicas of works submitted for the Anyang Public Art Project are on display.

After stepping out of Kim Chung-up Architecture Museum, Anyang Pavilion by Siza is the first building you will see on the path leading to Samseongsan. The main feature of Anyang Art Park, the pavilion features the concrete exterior walls with curved and straight lines that have long defined the Portuguese architect. It is designed in a way that it looks different from every angle. Standing at the foot of the entrance to the mountain and near the main road, the pavilion serves as the intermediary for its surroundings. 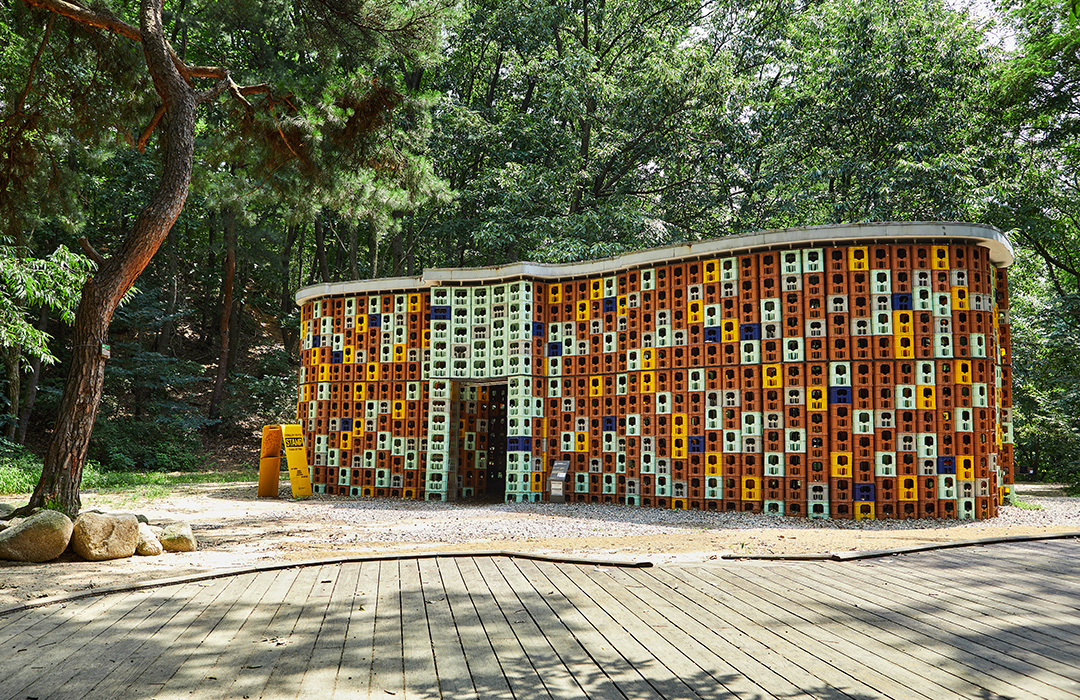 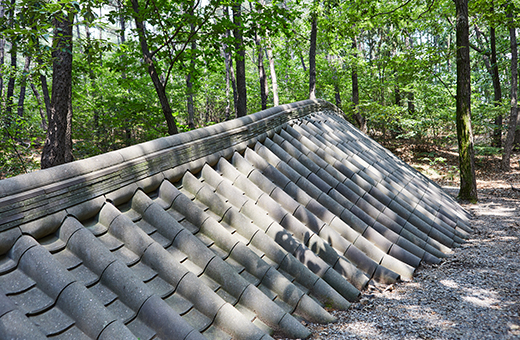 ‘The Tail of Dragon’ by Lee Seung-taek 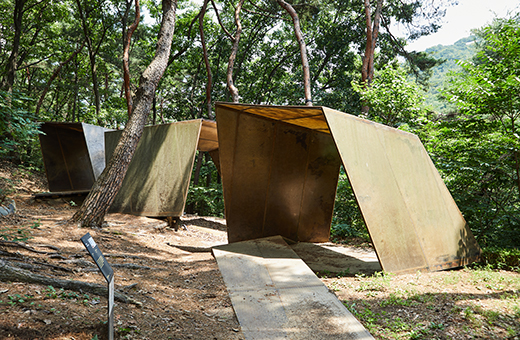 Past the pavilion and across the street, you will spot public art pieces scattered all over. From there, you can go straight up or take a roundabout route. But if you keep on walking without paying attention to your surroundings, you may miss works of art.
In the middle of the stream that flows from Samseongsan toward the park stands a sculpture that shoots off water. It’s by Belgian artist Honore d’O. Farther up the forest path, you will also find ‘Dimensional Mirror Labryinth,’ a circular mirror with steel pillars, and ‘Anyang Crate House,’ made of piles of plastic crates.
There are also pieces by Korean artists, including Yi Hwan-kwon, who builds humorous sculptures of human bodies by messing up proportion of the bodies, and Lee Seung-taek, who plants “giwa” tile roof into the ground to make it look like a dragon tail. 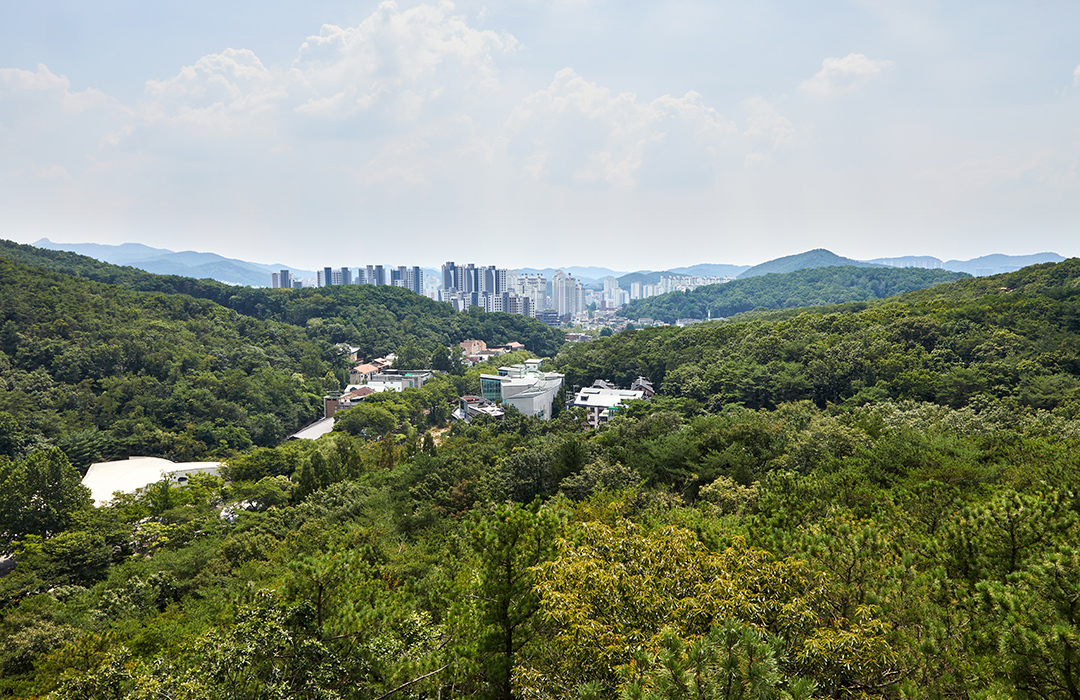 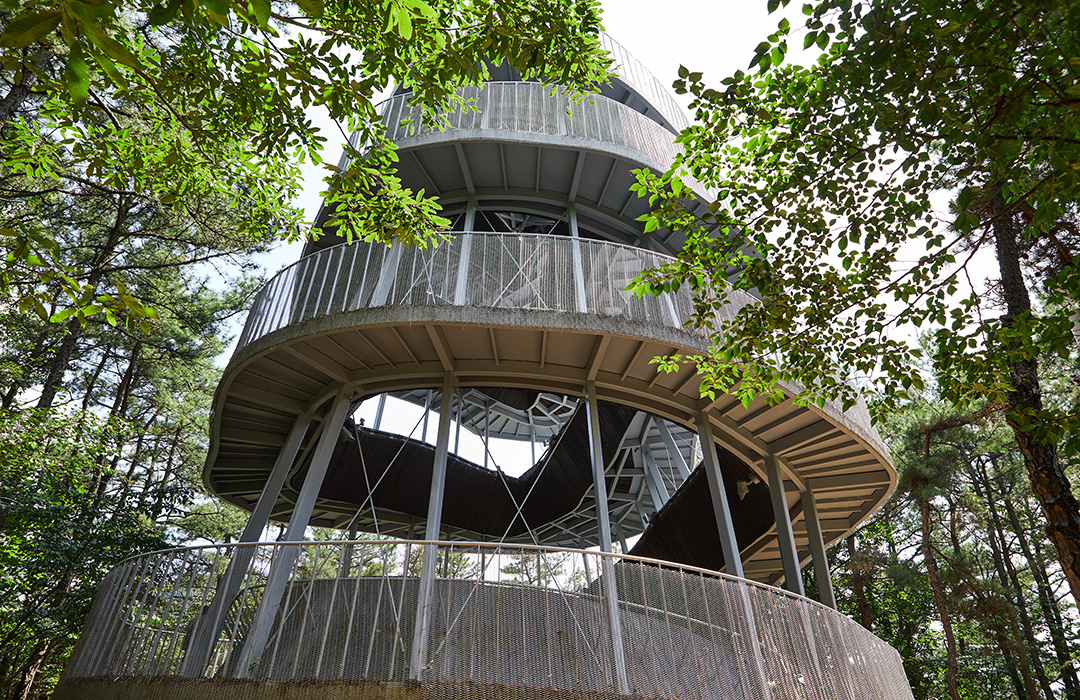 Touch of Art on Viewing Tower and Outdoor Stage
As you walk on the woodland path, you will soon see the sign pointing toward the viewing tower designed by MVRDV, called Anyang Peak. MVRDV is the Dutch architectural and urban planning studio, an innovative group that turns dreams into reality. MVRDV’s inimitable touch is apparent on this observatory tower. The spiral path stretches into the structure, which is an extension of Samseongsan that fits in seamlessly and naturally with the hill. Without stairs, you will be taking an easy stroll up the viewing tower. The slope is gentle enough for children or elderly. And before too long, you will find yourself at the top.
Once you come down from the tower, you can reach ‘Linear Building up in the Trees’ by Acconci Studio (Vito Acconci) at the end of the path taking you to the valley at the top. It connects the parking lot and the outdoor stage, something that appears complicated at first but also come across as practical. It has been featured in music videos and TV shows.
Anyang Art Park is about a 40-minute drive from SIGNIEL SEOUL in Jamsil or LOTTE HOTEL SEOUL in Sogong-dong. There is probably no other place located within an hour of the heart of Seoul that offers trees, streams, art and architecture all in one spot like Anyang Art Park.
APAP project returned in the summer at Anyang Art Park. How about a quick trip away from the bustling Seoul and into the forest full of art?