Jongmyo in Autumn
Things get busy at Jongmyo in autumn. Jongmyo Daeje is scheduled for this time of year and the shrine must also be prepared for the gorgeous October foliage. Here is Jongmyo at its most beautiful in autumn.
Jongmyo is a shrine that houses memorial tablets for the late kings and queens of the Joseon Dynasty. It was considered the most important place during the Confucianism-driven Joseon era. Jongmyo feels at once solemn and comfortable, imposing and cozy. Let’s walk through Jongmyo in autumn ahead of Jongmyo Daeje.

1st Saturday of Novemebr, Jongmyo Chugye Jehyang
The Confucian worldview can be summed up in a phrase that describes the process in which a virtue in the man leads to the order in the family, which in turn empowers the country and then brings peace to the rest of the world. During the Joseon Dynasty, the ancestral rites were an occasion that established the foundation of the rest of the world. And the royal ancestral rituals were the largest event in the dynasty. Jongmyo was a shrine for memorial tablets for the kings and queens of Joseon, and also a place to hold rites for kings. Jongmyo Daeje (rite for the late kings and queens) was the most important national event. There were regularly scheduled Jongmyo Jerye rituals, once each season, and temporary rituals took place to celebrate great feats or mourn tragedies in the dynasty. The rituals were scrapped under the Japanese force during King Sunjong regime, before resuming in 1969 thanks to the Jeonju Lee Royal Family Association, founded by the Jeonju Lee clan, descendants of the Joseon-era dynasty. Today, Jongmyo Daeje takes place in May and in November, though they are somewhat different in nature. Chungye Jehyang held on the first Sunday of May is more of a cultural event. Chugye Jehyang on the first Saturday of November is a more formal royal ancestral rite. 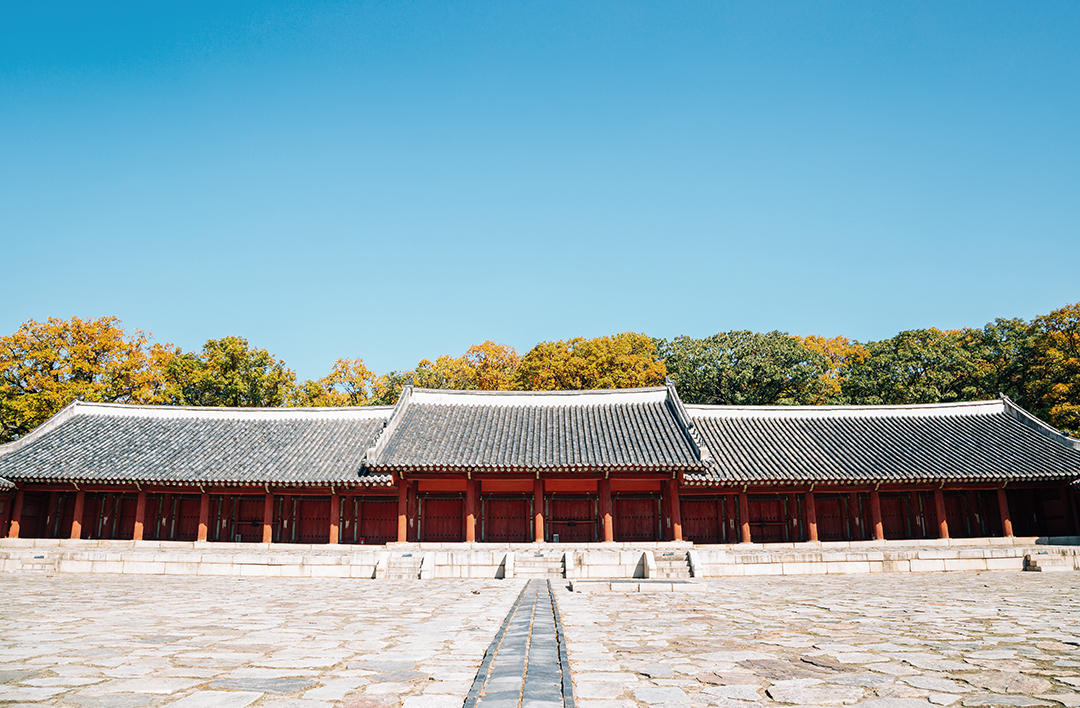 Jongmyo, as work of architecture, exudes tranquil and solemn vibes. 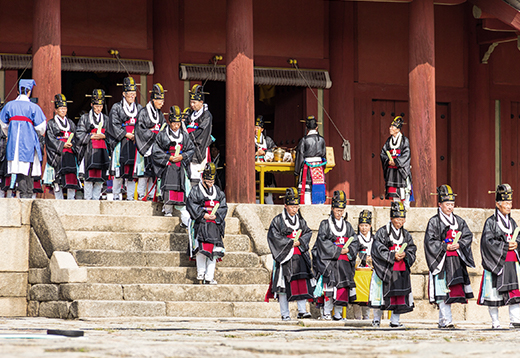 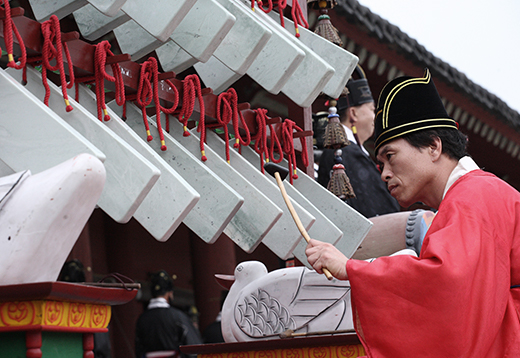 The processes for Jongmyo Jerye are slightly different between eras. According to According to , Jonngmyo Jerye began with the purification of the king’s body. The king started taking baths eight days before the ceremony and ate light meals while staying away from anything ominous. On the eve of Jerye, the king moved into jaegung (also called jaeshil, eojaeshil or eosukshil). Though it looked complicated, Jerye, in essence, isn’t much different from the rite held in a typical household. People called for spirits, served them food and sent them off. The major difference was that the king directly oversaw the whole ceremony, and there were 27 official positions helping run the ritual. And each procedure of the rite was accompanied by Jongmyo Jereyak (court music and dance).

Jongmyo is at its most beautiful in autumn

History of Jongmyo
Jongmyo was built in 1394, the same year the Joseon Dynasty was founded. And the kingdom and the shrine were forever linked in history. When Joseon struggled against the Japanese invasion, Jongmyo suffered, too. During major conflicts, such as the Japanese invasion in 1592 and the Manchu war of 1636, kings were forced to run from their palaces. And they always took the ancestral tablets for their predecessors from Jongmyo before anything else. The Korean verb, ‘treating carefully like ancestral tablets,’ came from the Joseon-era practice. King Seonjo, before taking refuge during the 1592 invasion, packed his ancestral tablets first. He took them out of Jongmyo and moved them to Kaesong with the help of some 50 horses. Once it became too difficult to carry those tablets farther, they buried them underground and ran for Sinuiju. While seeking asylum in China, King Seonjo sent retainers back to Kaesong so that buried tablets could be brought back up. The Japanese forces took over Jongmyo, but each night, cries were heard from empty ancestral rooms, and soldiers died bleeding with no apparent reason. The Japanese then set Jongmyo on fire. After returning to the capital, King Seonjo, upon discovering ashes of Jongmyo, was inconsolable. After succeeding Seonjo, Gwanghaegun began restoration work of Jongmyo before anything else. During the 1636 Manchurian invasion, the Joseon royalty had planned to take refuge on Ganghwa Island. Only about 3,000 troops of Qing Dynasty took over the island, forcing the Joseon king to Namhansanseong. The problem was that the king had sent his ancestral tablets to Ganghwa already. King Injo dispatched Yun Bang, his top lieutenant, to Ganghwa and ordered him to bring tablets back. Yun somehow secured the tablets on an island now ruled by the Qing forces, but he was later stripped of his position and banished as punishment. It was because he had disrespected the tablets by placing them in the same straw bag as servants’ rags. In Joseon, tablets, containing spirits of the king and the queen, were the most important symbol. Jongmyo, which housed those tablets, was the most solemn place. 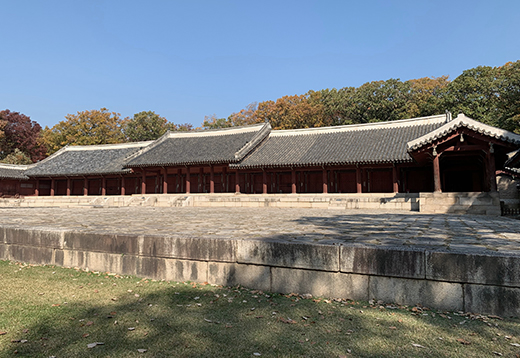 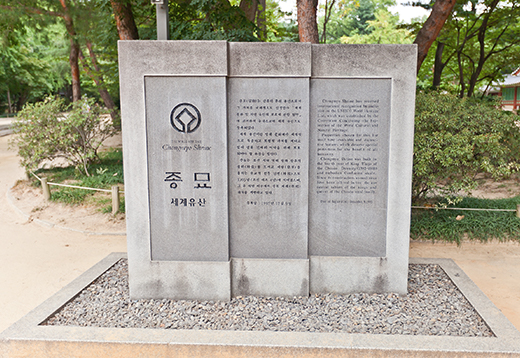 Frank Gehry’s Favorite Place
Jongmyo is divided into a few sections. Jeongjeon, the main hall and the largest structure on the compound, stands in the middle. To the west is Yeongnyeongjeon. In front of both Jeongjeon and Yeongnyeongjeon, you will see courtyard-like space paved with arch stone. It’s called Woldae. On the east side of Jeongjeon, Jeonsacheong stands up above and Jaegung sits below. The king spent the last night before Jongmyo Jerye at Jaegung. Jeonsacheong was for inspecting food to be presented and served during the ceremony. And the king himself was in charge of food inspection. Next to Jaegun stands Hyangdaecheong, which holds the tablet for King Gongmin of Goryeo. Jongmyo built a place for a Goryeo-era king as a symbol of the transition from Goryeo to Joseon.
Jeongjeon is the most important structure at Jongmyo. A small gate can be found in the heart of the walls surrounding Jeongjeon. It’s called Namsinmun, through which spirits of the Joseon royal families pass. Gates on the east and west sides of the walls are of different sizes. The King walked through the one on the east, and others, such as court musicians, used the west gate. Once inside, Woldae, the elevated courtyard, comes into the view above a few steps. It’s 109 meters wide and 69 meters long, and is paved with arch stones, each about 45cm x 45cm. There are three paths from Woldae to Jeongjeon. The path in the middle, paved in black bricks, is for the spirits and you may not step on it. The king took the uneven path on the right. They made parts other than the middle intentionally bumpy, so that people, even the king, wouldn’t move around so disrespectfully inside Jongmyo. In other words, people were expected to take careful steps and be respectful.
Once past Woldae, you will reach Jeongjeon, a simple but majestic structure at 101 meters long. The main hall is made up of 19 Shinsil, or chambers housing spirits. The first room on the west end honors the founding King Taejo of Joseon. Chambers were added for each successive king and queen, which is why Jeongjeon ended up being so long (it’s the world’s longest single wooden structure). Jeongjeon wasn’t this long in the beginning. When it first opened in 1394, it had only seven Shinsil chambers. But since the Joseon Dynasty had 27 kings, there wasn’t enough space for all. After several expansions, Jeongjeon ended up with 19 chambers. You may have noticed that the math doesn’t add up and 19 rooms are still not enough for Joseon’s 27 kings. That’s what Yeongnyeongjeon is for. Only the spirits of kings and queens who were recognized for great accomplishments could enter Jeongjeon. Everyone else ended up at Yeongnyeongjeon. The two halls’ structures are similar but Yeongnyeongjeon is much smaller. 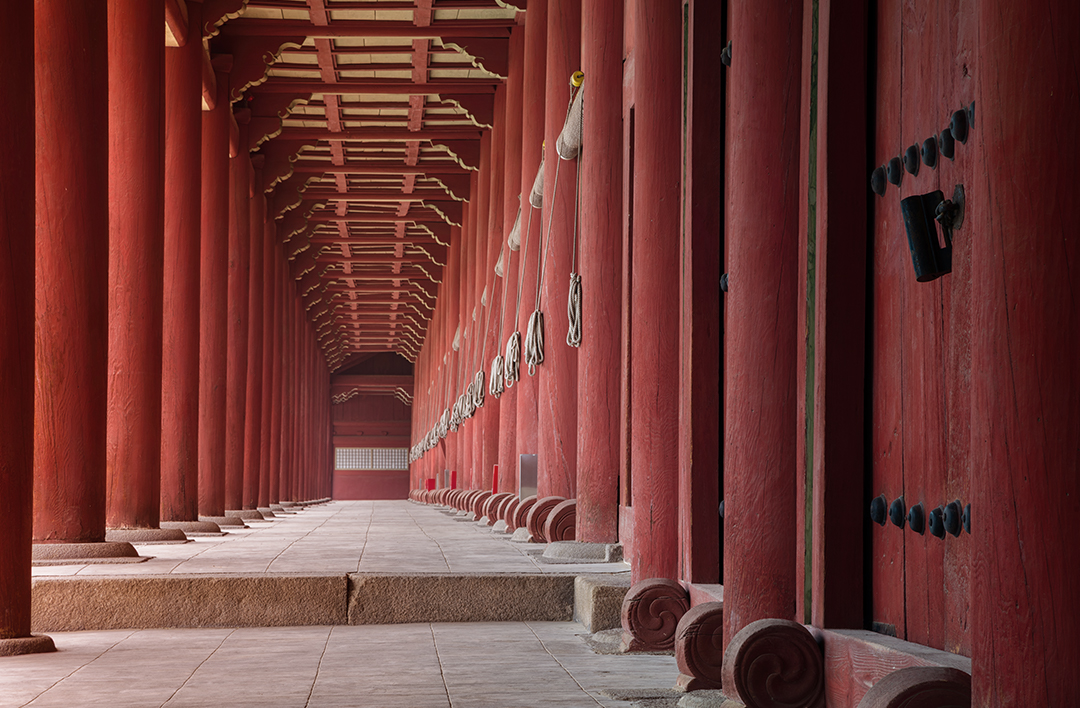 Columns lined up at Jongmyo

Oedaemun, the main gate to Jongmyo, doesn’t even have any sign above it, unlike the way gates to royal palaces do. Because Jongmyo is a place for royal spirits, they kept decorative elements to a minimum. Aside from spaces for the ancestral rituals, there is nary a hint of anything being overdone. There isn’t even dancheong (traditional decorative painting) done on wood. The building is finished with red lacquer and only the end parts of the base of the giwa tiles have been painted in green. The 20 columns, each about 40 centimeters tall, are arranged neatly, separated by the same distance without any decoration. The highly-functional structure with such a plain characteristic exudes comfort. But it also carries the weight of history, with its length adding to the solemn feel. At Jeongjeon, you will feel reverential and comfortable at the same time, and the structure gives off grand and cozy vibes at once.
Frank Gehry, the world renowned architect of Guggenheim Museum Bilbao and Walt Disney Concert Hall, thinks quite highly of Jongmyo. He would often fly across the Pacific and travel to Korea just to enjoy Jongmyo. Gehry once said a place as tranquil and somber as Jongmyo is akin to a miracle. Gehry also marveled at how the view from above Woldae could be so dramatically different from the view from below. 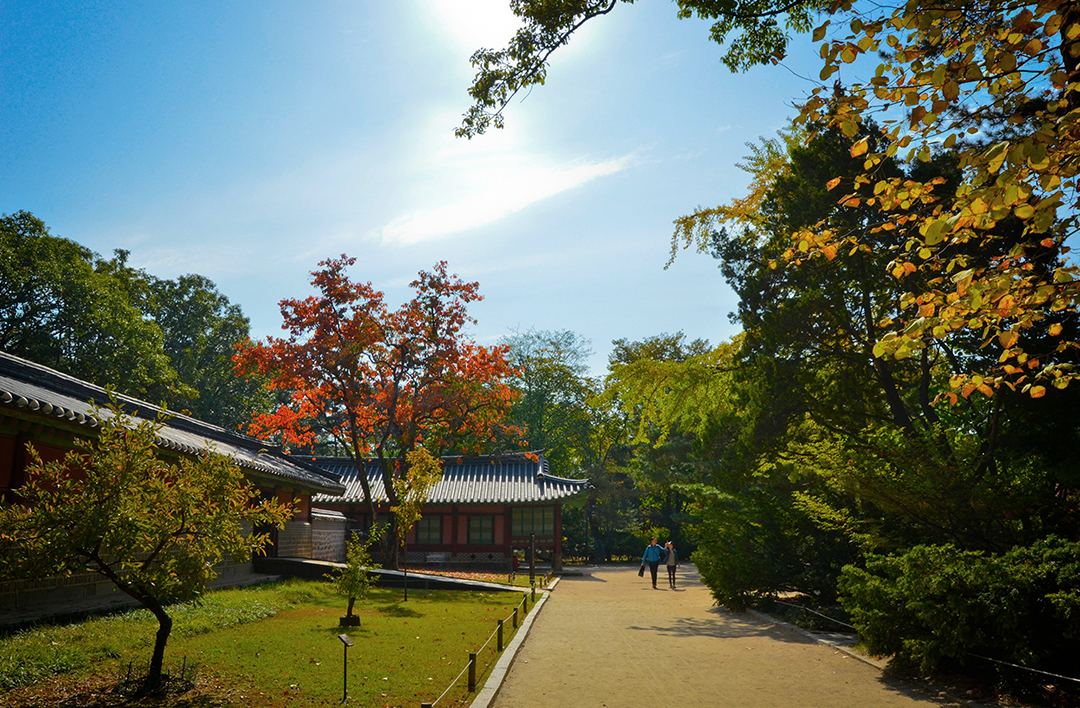 Jongmyo is a great place to go for a walk during autumn.

Autumn at Jongmyo
Jongmyo is at its most beautiful self in autumn. And it goes beyond natural beauty. Whereas spring symbolizes the new beginning, autumn is the time of year for quiet reflection. And Jerye ceremonies at Jongmyo reflect that. Chungye Jehyang in May is quite festive, but Chugye Jehyang in November is decidedly more restrained and solemn. Perhaps that reveals the true character of Jongmyo. The annual fall ceremony is accompanied by Jongmyo Jeryeak, featuring a blend of song, instrumentation and dance. The somber tunes and understated choreography provide a glimpse into the depth of history at Jongmyo. It would take an hour to tour Jongmyo. To fully enjoy autumn in the area, you should also head over to Cheonggyecheon, Biwon garden at Changdeokgung, or even Unhyeongung, former residence of Daewongun. 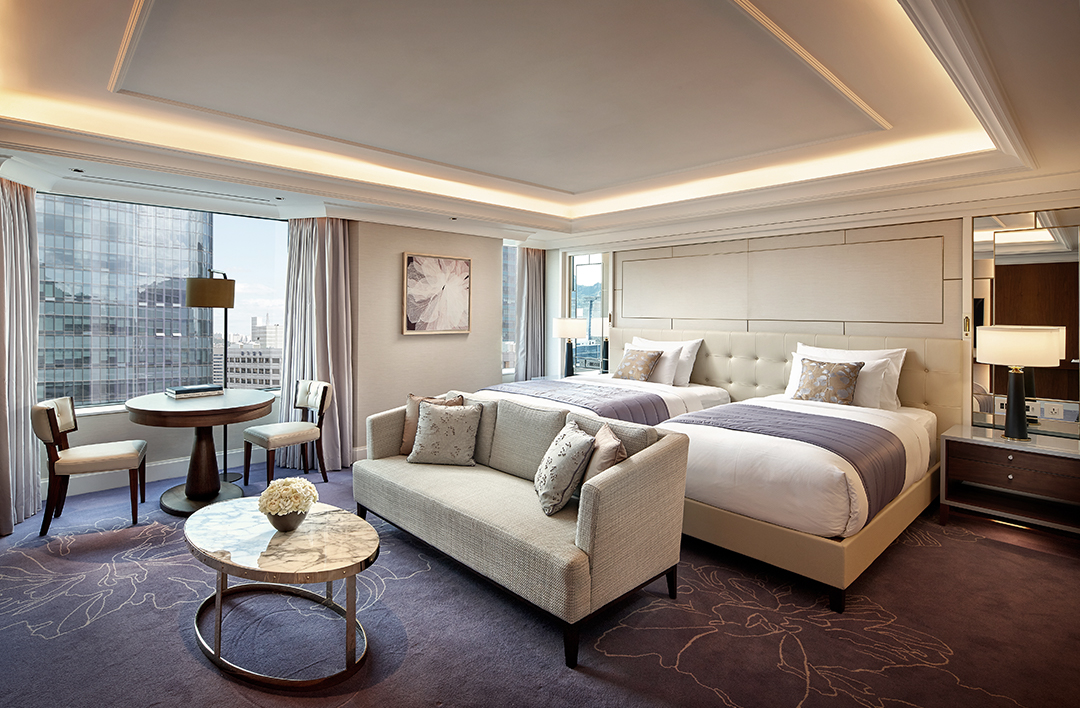 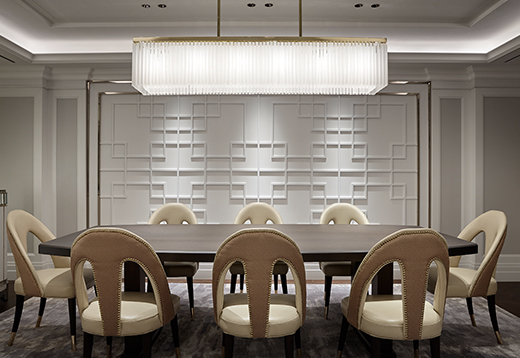 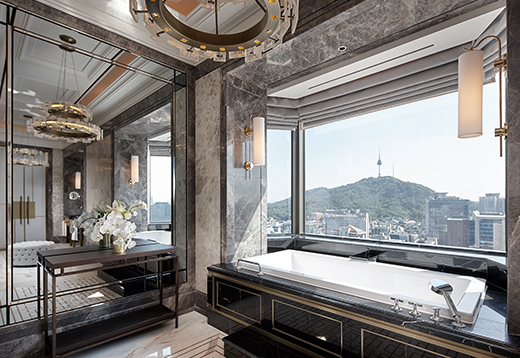