Shadow of the Silk Road at Chorsu Bazaar
As the trade hub of the Silk Road, Central Asia enjoyed prosperity through the 16th century, connecting East and West. Tashkent, known as the capital of Central Asia, still possesses the historical remnants attesting to its glorious past all across the city.
The Silk Road refers to ancient trade routes that facilitated commerce between East and West before there were advanced means of transportation. It was also used as a passage through which civilization, such as China’s papermaking skills, spread to other regions. In the 7th century the trans-Eurasian trade included Changan, today’s Xian, of the Tang dynasty and reached Constantinople of Byzantium. The sword and glassware that were introduced to Constantinople from Tang China also appear in the relics of Silla. It is possible to gauge how extensive the power of Silk Road trade must have been. 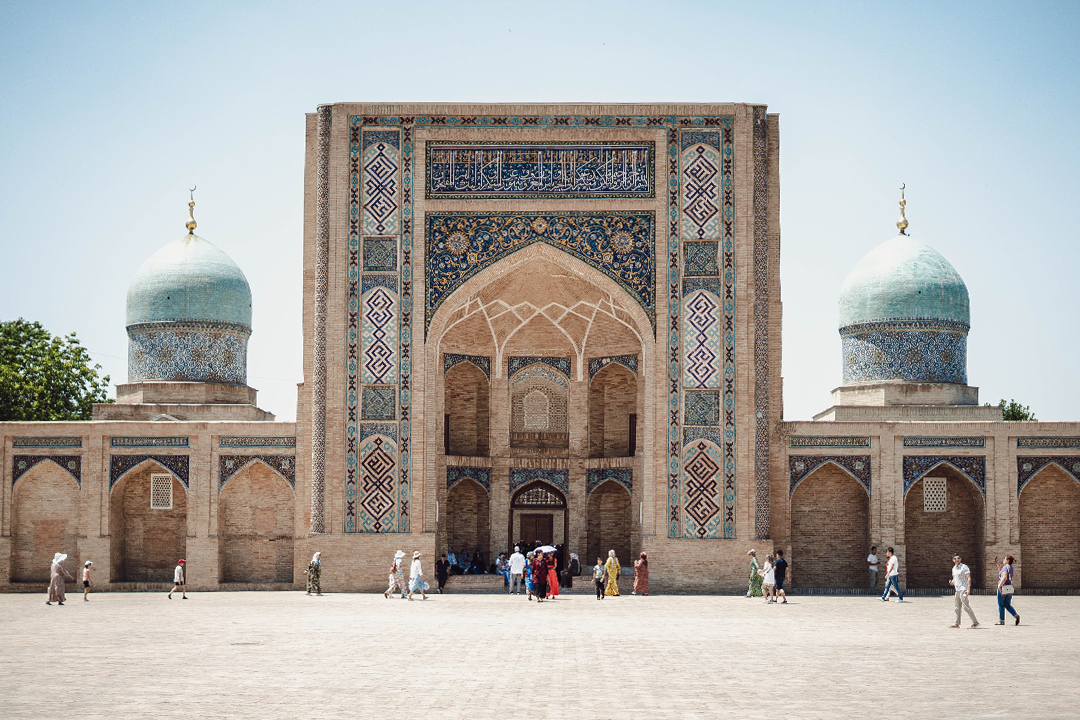 Tashkent, a city famous for mosques

History Museum Alive, Tashkent
From China’s Changan, Ferghana Valley can be reached via a route that crosses the Taklamakan Desert and Tien Shan Mountains. It’s the most fertile land in Central Asia. In the basin of the Chirchik River, located near the valley, lies an area where caravans can take a break. It became Tashkent, ‘the city of stone.’ Because of its geographic traits, Tashkent housed caravanserais(roadside inns for travelers) and grew into one of the major cities of the Silk Road.
Some of the historic landmarks in Tashkent are Chorsu Bazaar, Hazrati Imam Mosque, Minor Mosque, Independence Square, and Amir Timur Museum. You can truly enjoy traveling in foreign countries when you can experience both the lives of local people and have a survey of historic sites. In that sense, Tashkent offers wonderful opportunities for visitors. You can see how the descendants of the Silk Road era are living at the bazaar and check out the domes and minarets, symbolic of the Islamic culture, at Hazrati Imam Square. You will find yourself in constant amazement at such exotic sights and realize why people aspire to travel globally. 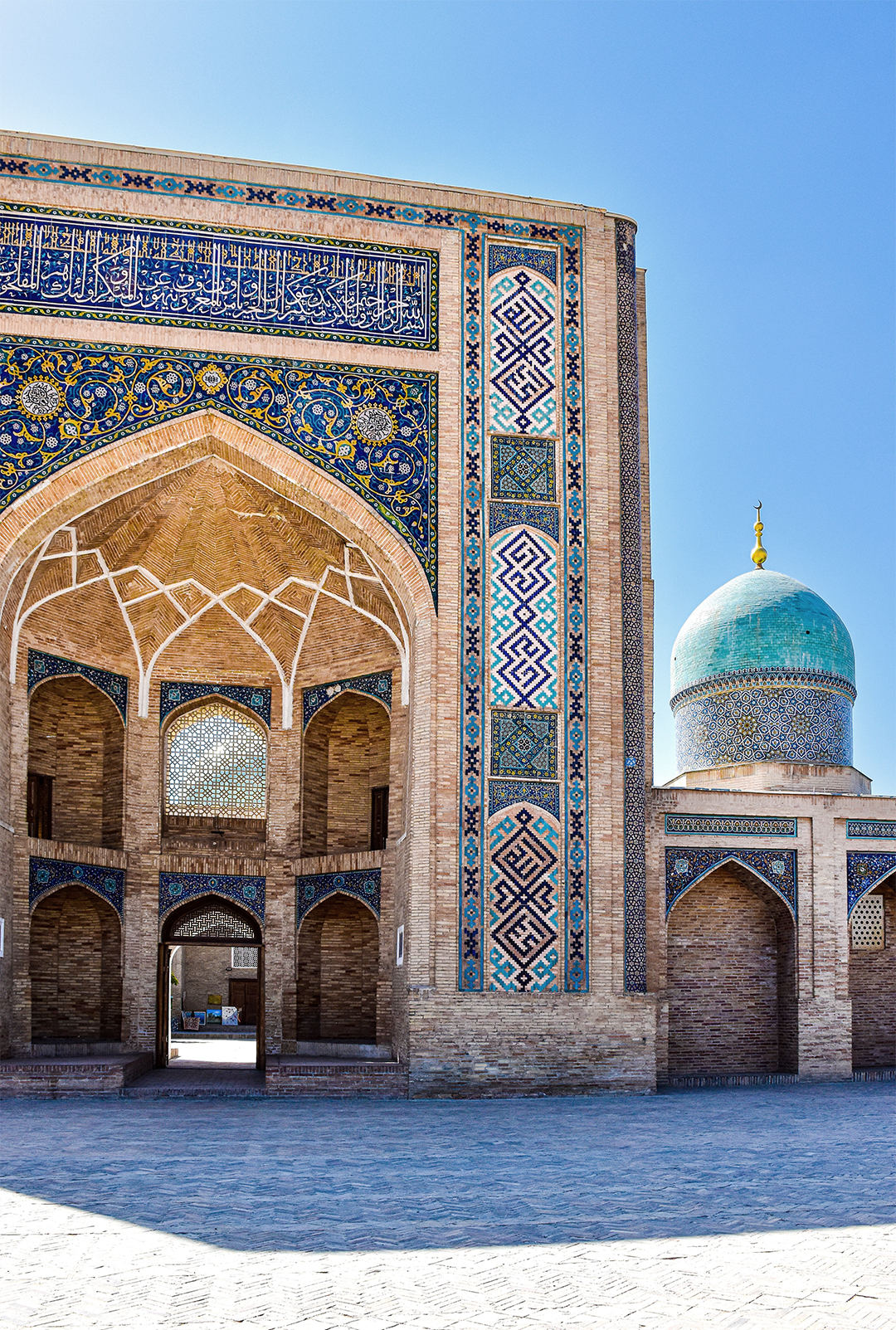 Waterway and Market, Chorsu Bazaar
Chorsu Bazaar can be reached via subway. Although Tashkent had existed since the 11th century, it previously wasn’t considered as important as Samarkand or Bukhara. When the Russian Empire started invasion in 1858, Central Asia became a tributary. Russia strategically made Tashkent a new capital of the region as it was located on the edge, unlike Samarkand or Bukhara, and began expanding it. During the Soviet Union era, Tashkent was ranked No. 4 among all the union states. One of the projects was the construction of a subway system, marking the very first time in the history of Central Asia. When you exit the Chorsu Metro station, you will find Chorsu Bazaar with a large jade-tone dome on top. Chorsu Bazaar means four waterways. Although the bazaar has a relatively short history of about 100 years, it is the biggest marketplace in Tashkent that has kept all the traces of Silk Road merchants. Vendors prepare their stands under the center dome and along the extended terrace area that connects to the outside. 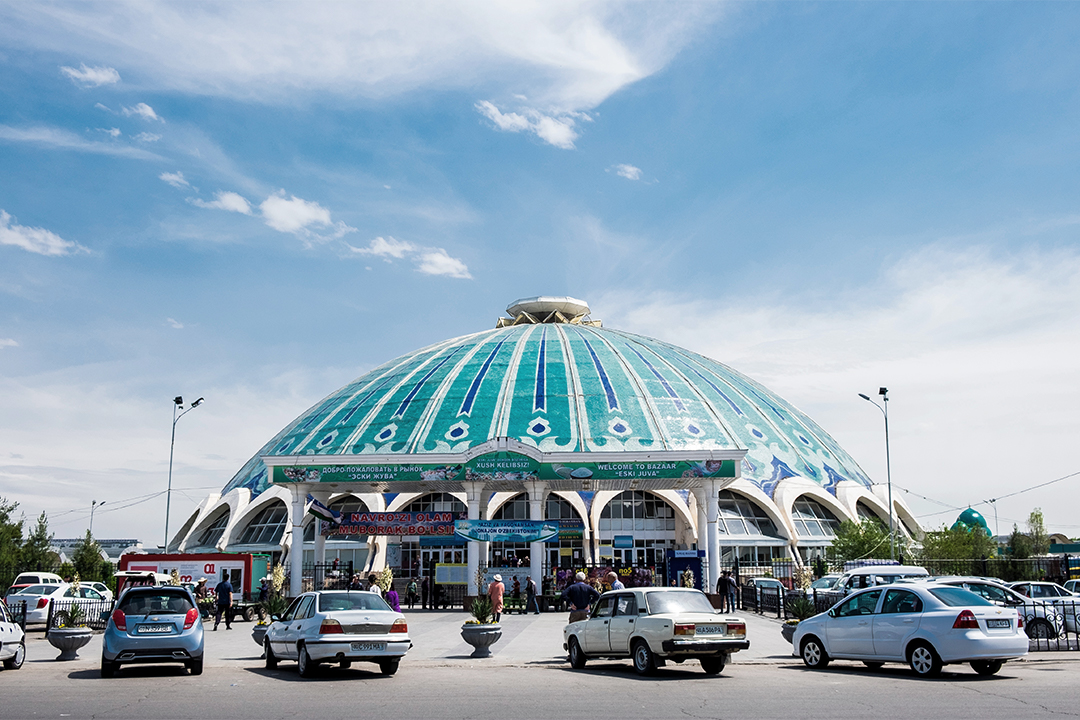 The dome over Chorsu Bazaar is visible from afar 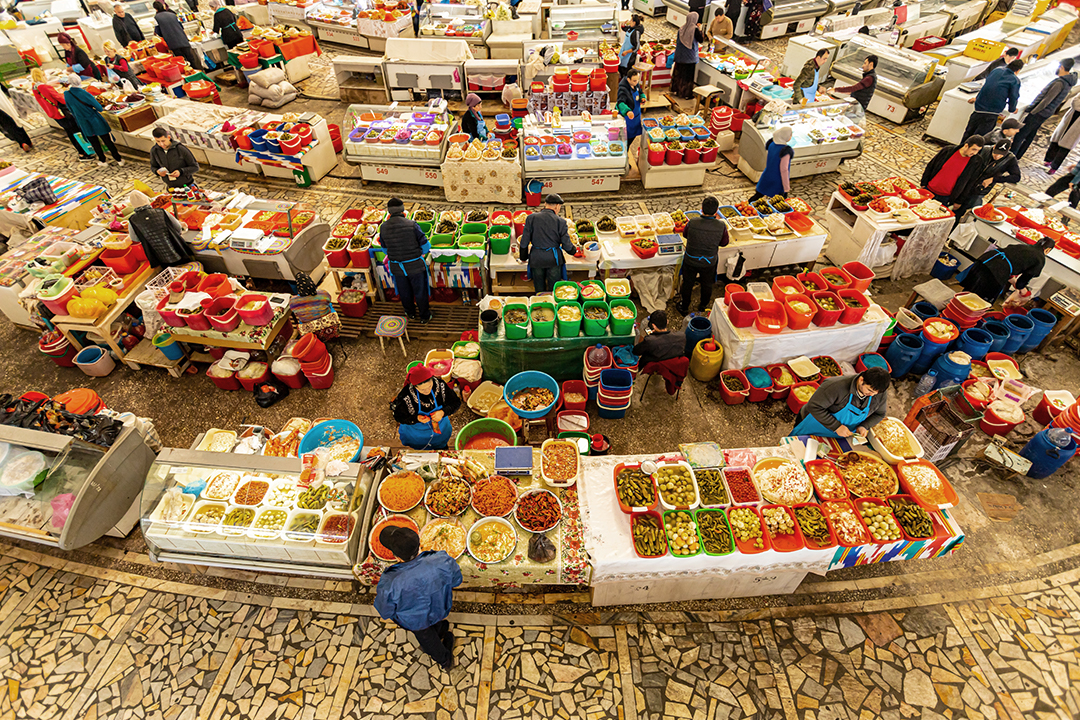 Vendors selling seafood, meat and daily necessities are bunched together.

Inside the domed space, it is always crowded with merchants and customers negotiating for bargains. There are diverse vegetables, fruits, pickles, meat, bread, spices, nuts, and dairy products, all in surprising abundance. In summer, a fruit called denya is popular for its sweet flavor and juiciness. Freshly-baked bread such as camca and lepyoshka as well as the signature dishes of Central Asia such as plov and shashlik work up the appetite for hungry tourists. What’s important here, though, is the atmosphere. Looks on people’s faces are bright. Shopkeepers are friendly and eager to make a sale. The vivaciousness of people at the bazaar resembles the one-of-a-kind drive that made the Silk Road trade successful. 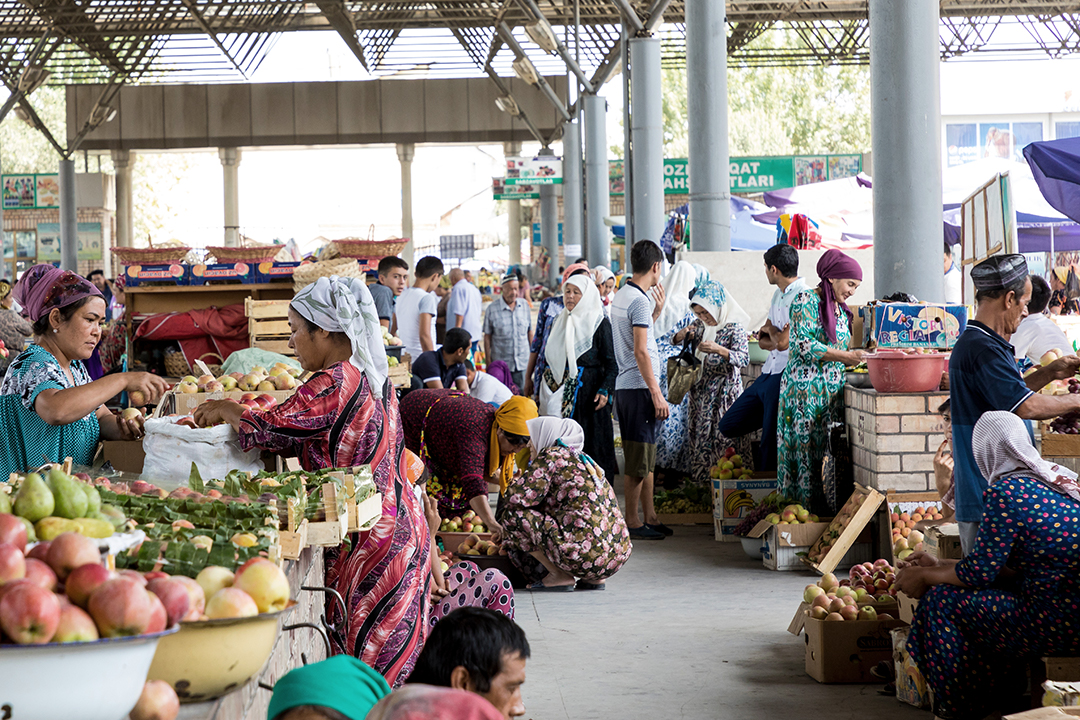 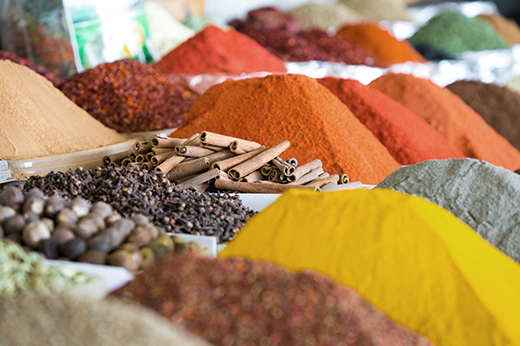 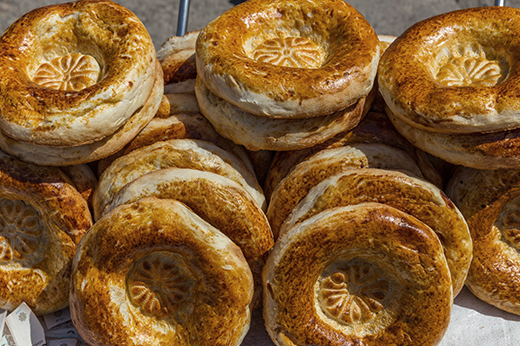 Bread for the Uzbek people

Arena of Competition for Empires
Central Asia used to be the arena of competition between empires that were keen on taking a superior position on the Silk Road, coveted by not just the Tang dynasty but many other nations and ethnic groups. In the beginning, the Sogd showed their skill in trading on the Silk Road, which was followed by Islamic merchants. With the rise of the Mongol Empire and subsequent conquest of the Khwarazm dynasty in 1219, the Silk Road came under the sway of Genghis Khan. After the demise of the Yuan dynasty, Amir Timur, a self-proclaimed descendant of Genghis Khan, built the Timurid Empire in 1370, designating Samarkand as its capital, and took over the Silk Road. Bukhara and Tashkent also had a prosperous period, and later became the foundation for the establishment of Bukhara Khanate, Kokand Khanate, and Khiva Khanate when the northern Uzbeks invaded Samarkand in the 1500s while the Timurid Empire was going through a turmoil.
The three countries are the founding states of Uzbekistan of today. Although the Silk Road era was declining with the emergence of the Age of Exploration, Uzbek people are still proud of their Muslim heritage in Central Asia. Such sentiments are best witnessed in Hazrati Imam Square. 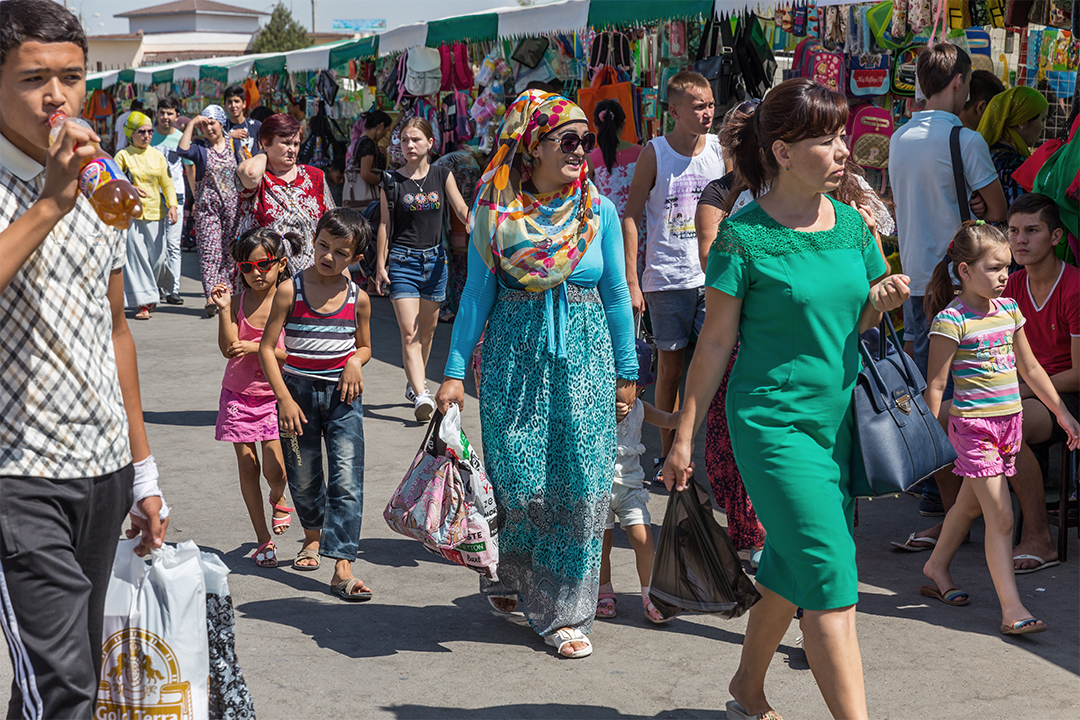 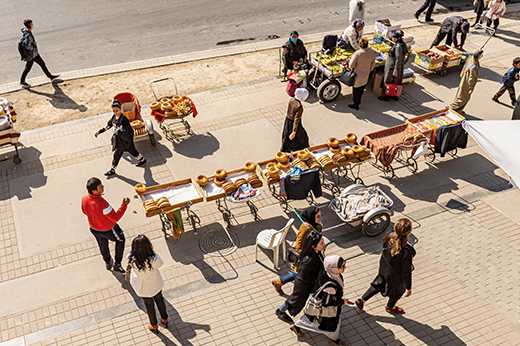 Street vendors are lined in and outside the market. 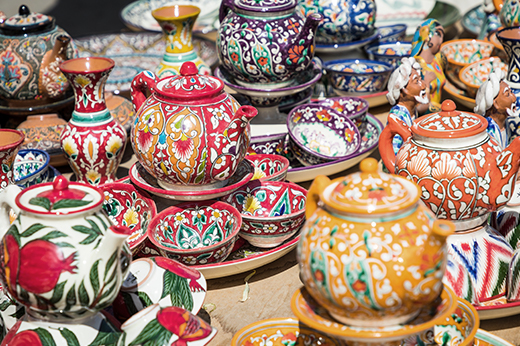 Having survived the 1966 Tashkent earthquake, Hazrati Imam Square and the surrounding area were elegantly upgraded with the addition of new Islamic-style architecture featuring oriental design elements. Hast-Imam Ensemble(Hazrati-Imam) is built with the mausoleum of Hazrati Imam at the center. Hazrat Imam was a Muslim scientist, Quran scholar, poet and the first-ever Tashkent-based clergyman. Also an excellent diplomat, he had stopped Turk warriors from invading Tashkent, even leading them to convert to Islam. It’s how he was known as ‘Hazrati(holy) Imam.’
Hazrati Imam Mosque was newly built in 2007 under the leadership of former Uzbek president Islam Karimov. The mosque has a dome and two minarets that are 53m high. You can climb up the minarets for a bird’s eye view of the entire complex. The dome roof is gold-plated, and the entrance of the mosque is decorated with pillars carved out of 20 santalales trees. The windows are designed to let sunlight in from sunrise to sunset. 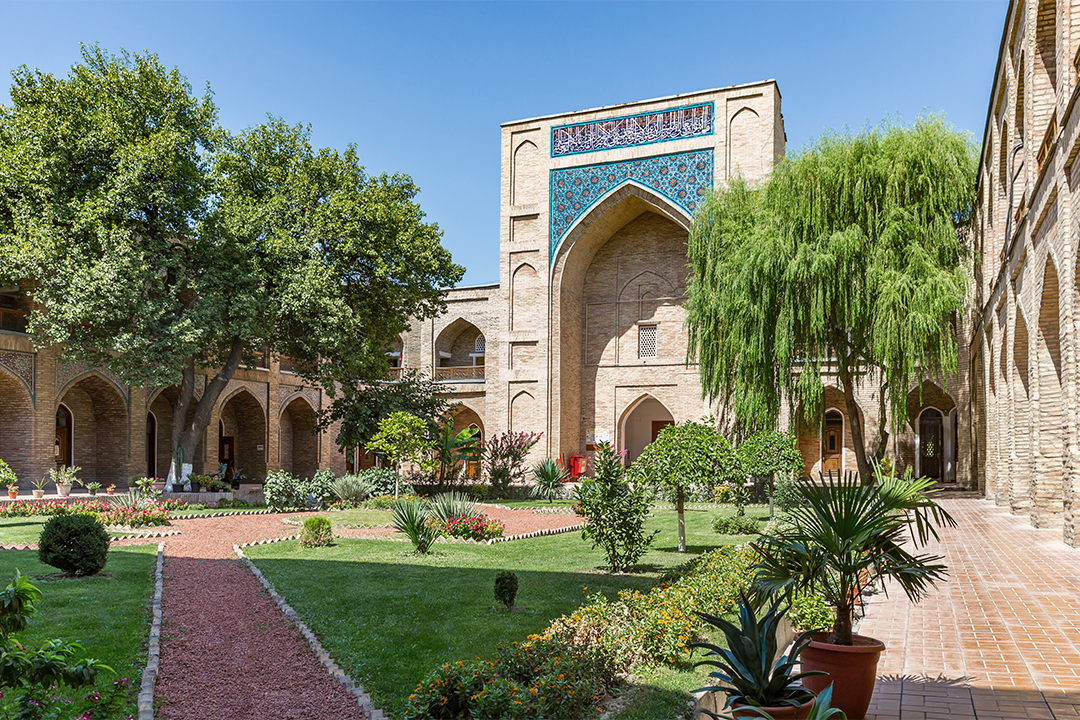 A school near the market

Muy Muborak Madrasah was built in the 16th century. Prophet Muhammad’s sacred hair is kept at the Madrasah. An Islam library representing Uzbekistan is also located there. The library is in possession of the Quran of Usman the third Kalif, some 20,000 books and manuscripts, and Qurans translated into over 30 languages. Usman’s Quran consisting of 353 parchment leaves is the only remaining original book that was transported to Uzbekistan during the Amir Timur age.
Once you learn about Uzbekistan, you can’t help but wonder at the strength that built Islamic civilization on the barren soil of Central Asia. On the road that starts at Chorsu Bazaar and ends at the Hast-Imam Complex in Tashkent, we could feel the spirit of the Uzbek people who had brought an endless glory to the Silk Road. Seemingly forgotten, Silk Road civilization is a fascinating piece of history that will never entirely disappear. 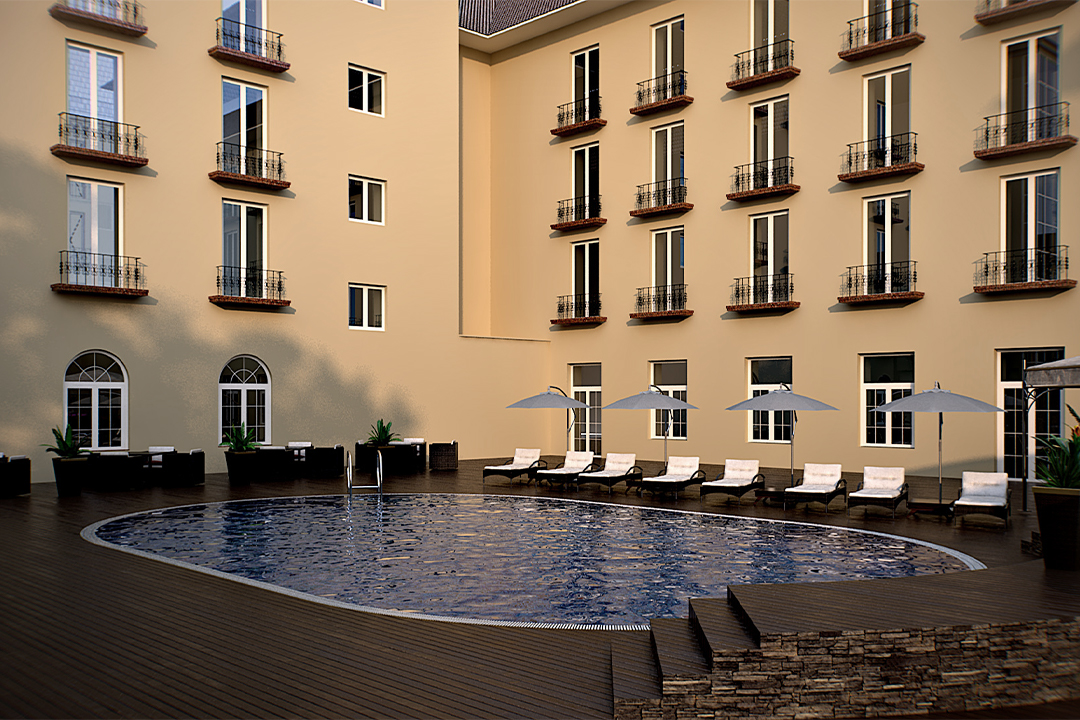 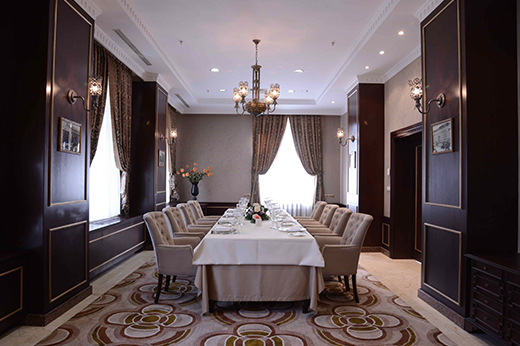 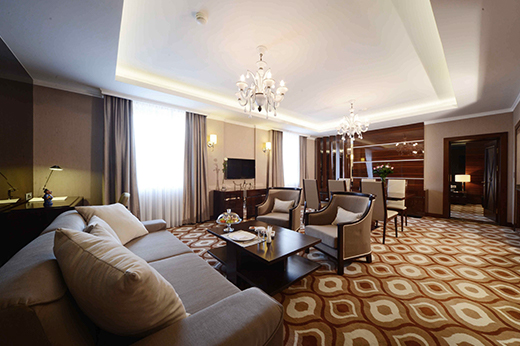 Where to Stay in Tashkent: LOTTE City Hotel Tashkent Palace
LOTTE City Hotel Tashkent Palace is located in the most trendy urban center of Tashkent, within a 10-minute drive from the airport. Built in 1958, the building that houses the hotel was designated as a national cultural heritage of Uzbekistan. The classic appearance of the hotel and stylish interior decor create a nice harmony. Various hotel facilities such as a beautiful courtyard, outdoor pool, and ‘6 Floor’ outdoor restaurant with the maximum capacity of 300 customers provide hotel guests with an exclusive, first-class service.