Immersive Art Captures New York
Art appreciation entails so much more than just seeing with your eyes. Seeing, hearing, and feeling, the entire body is thrown as a participant at immersive art exhibitions in New York City.
The heart of global culture and travel, the City of New York has various immersive experiences. In particular, its art market with museums, art dealings and experiences, is unrivaled.
The number of one-of-a-kind exhibitions offering more dramatic experience programs for more people, as opposed to a simple art viewing, is recently on the rise. Come to think of it, we are indeed living in the era of ‘Instagrammable moments’.  It is another reason why people are drawn more to immersive art exhibitions that provide unique experiences to the audience by making them become part of the artwork. Immersive art exhibition using digital media attracts viewers with supersized image projection, sensor-based interactive exhibits, and multisensory and virtual reality.
After a prolonged lull due to the pandemic, New York is gradually returning to normal, quickly jumping on the bandwagon of immersive art exhibitions, in time for the opening of new exhibition spaces designed for the specific purpose. As of the end of December 2022, three exhibitions dealing respectively with Klimt, Monet, and King Tut(Tutangkhamun) were underway in NYC. We are going to overview two of the events where you can immerse yourself in the worlds of European master artists. 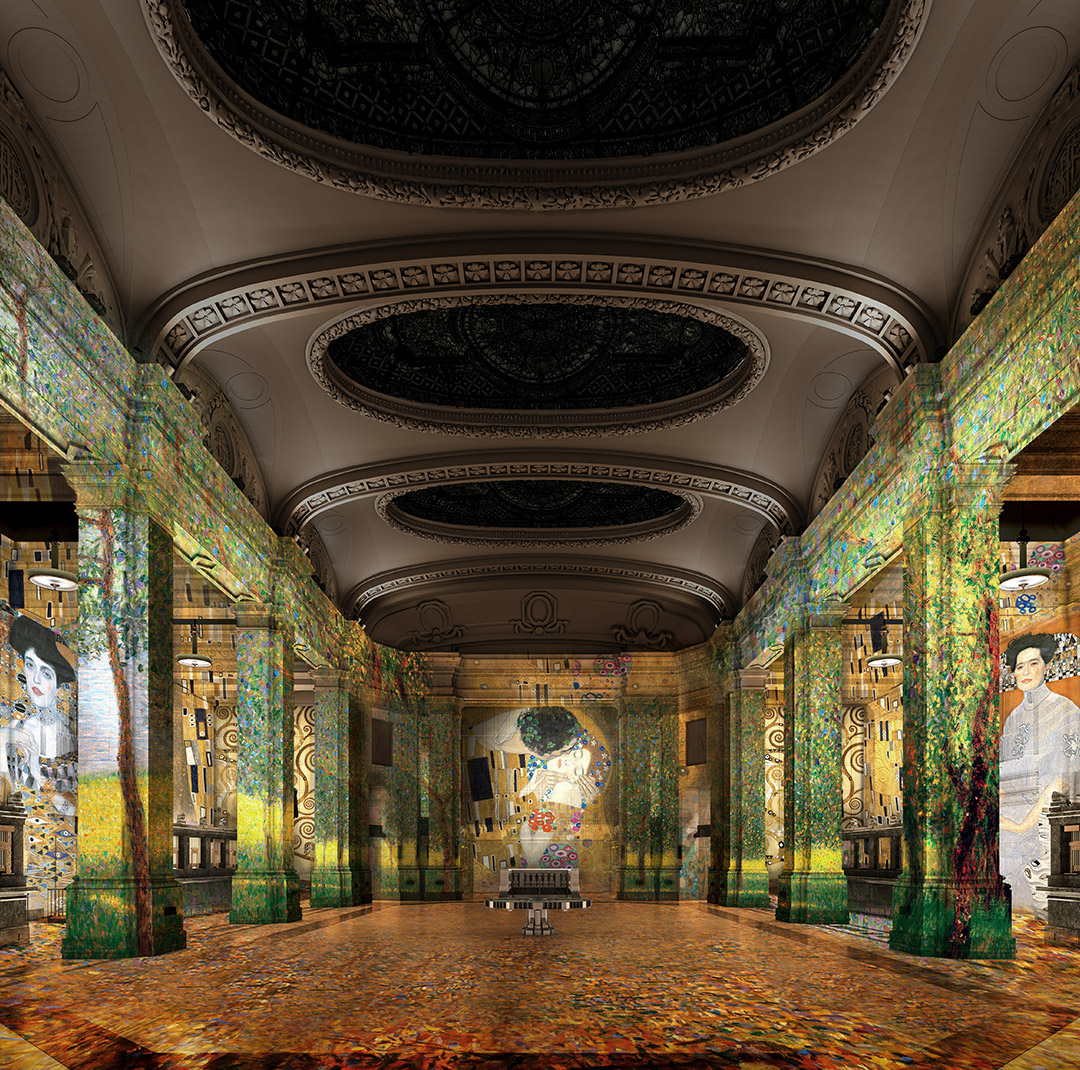 Emergence of Immersive Art Space, Hall des Lumières
"No matter what kind of space I’m working with, my primary focus is preserving its uniqueness, adapting to its architecture and its existing surfaces. Capturing the space’s own specific vibe and bringing it to life, using images to enhance it rather than detract from it."
[Gustav Klimt: Gold in Motion] Creative Director Gianfranco Iannuzzi

Debuted in September right across from New York City Hall Park, Hall des Lumières is a space that breathed fresh air into the immersive art scene of the city this fall. Culturespaces of France designed the new digital art center through joint work with IMG, an American entertainment, event, and talent management company. Culturespaces is the company behind a number of digital art spaces created as part of the ‘des Lumières’ series, including Bunker des Lumières in Jeju and Théâtre des Lumières in Seoul. 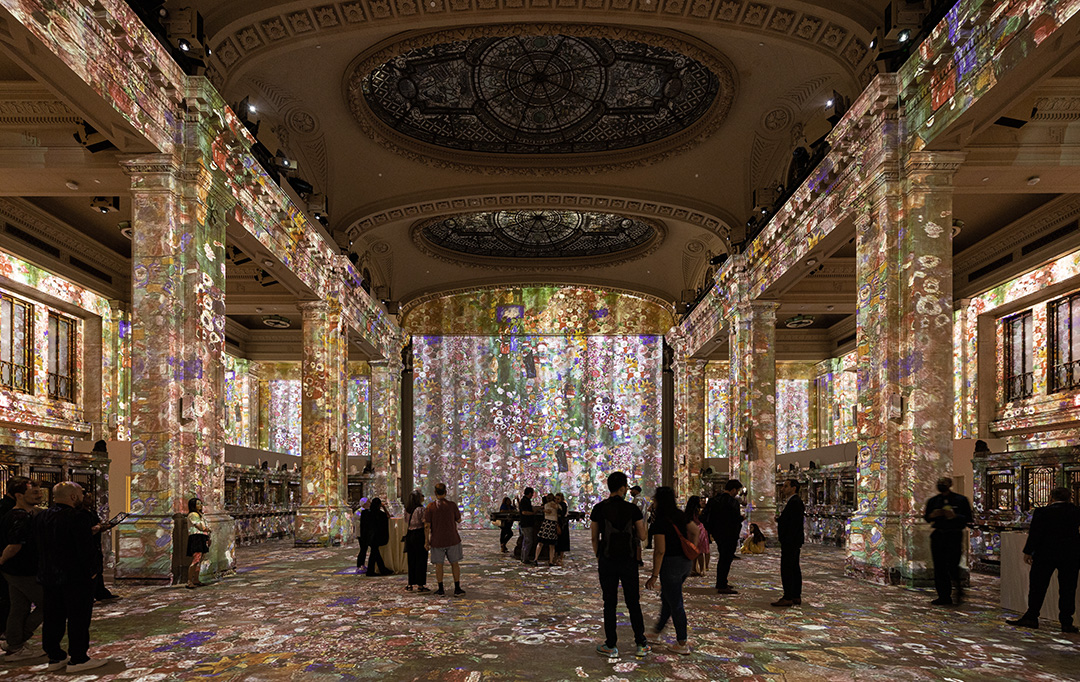 As can be seen in the design team’s previous work of creating a space for immersive art installations, including Carrières des Lumières, previously an old stone pit in French Provence, and Bassins des Lumières, decrepit submarine basins in Bordeaux, Hall des Lumières also presents a classic and decorative Beaux-Arts style space. The first floor featuring the 12m-high ceiling and expansive projection surface measuring over 13,000㎡, including the basement, is perfect for immersive art displays. The Emigrant Industrial Savings Bank building where Hall des Lumieres is housed was recorded as the largest bank building in New York City upon completion in 1912, and it still holds value in terms of architectural history. Currently it is listed in the American National Register of Historic Places and designated as New York City landmarks. 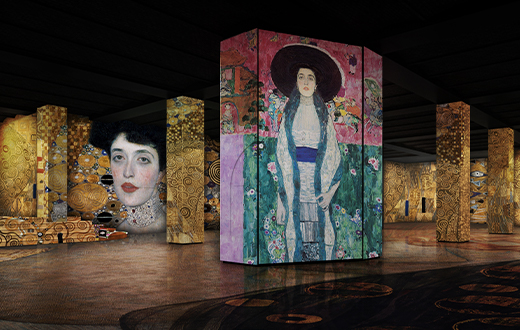 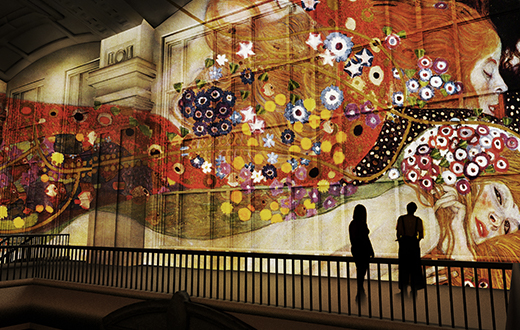 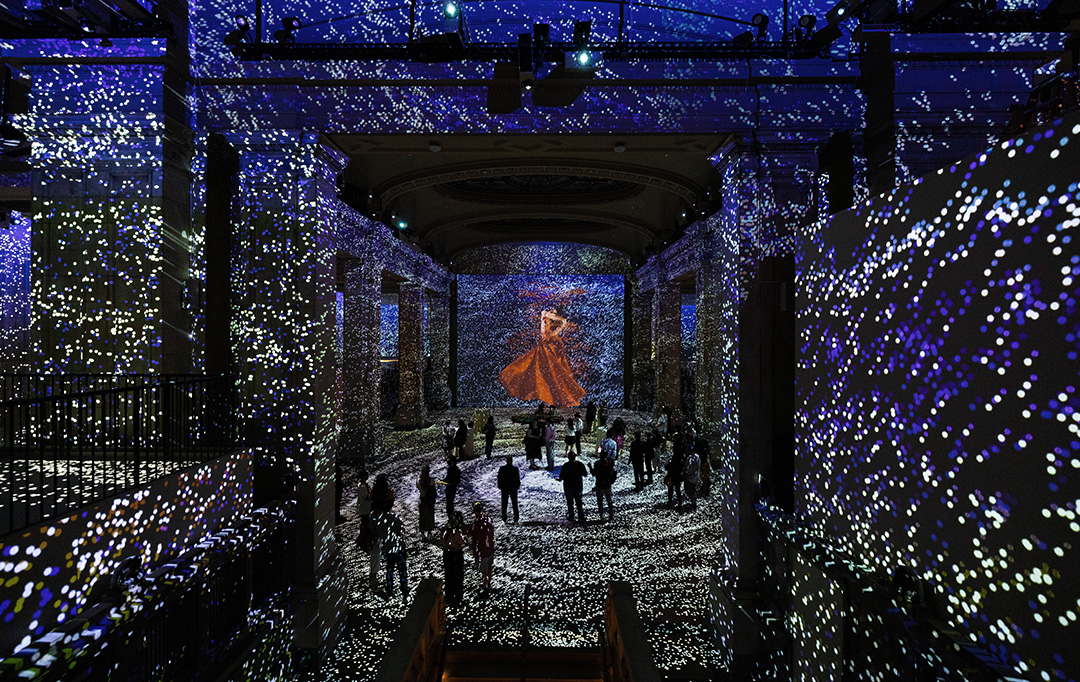 As an inaugural exhibition, 'Gustav Klimt: Gold in Motion' is underway at the hall, surveying the works of the Austrian painter who represents the art world of Vienna in the late 19th century. Gianfranco Iannuzzi who has overseen the production of immersive art exhibitions by Culturespaces is a creative director for this show. Having been introduced in various cities around the world including Paris and Seoul, Hall des Lumières presents an art show that quickly charms the audience by playing majestic classical music pieces composed by Beethoven, Wagner, or Chopin while projecting vivid, enchanting works by Klimt, such as "The Kiss" and "The Portrait of Adele Bloch-Bauer's Wife" on massive walls, against the backdrop of a NYC building just as historic as the paintings. Other ongoing exhibitions are: ‘Hundertwasser, in the Wake of the Vienna Secession’ depicting the art world of architect-cum-artist Friedensreich Hundertwasser, a successor of the Vienna secession art movement; ‘5 MOVEMENTS,’ an immersive audiovisual art produced by Nohlab on the theme of five dance performances captured as phases of motion; and ‘Recoding Entropia,’ a dizzying, futuristic graphic work giving the audience a moment in a life beyond comprehension. 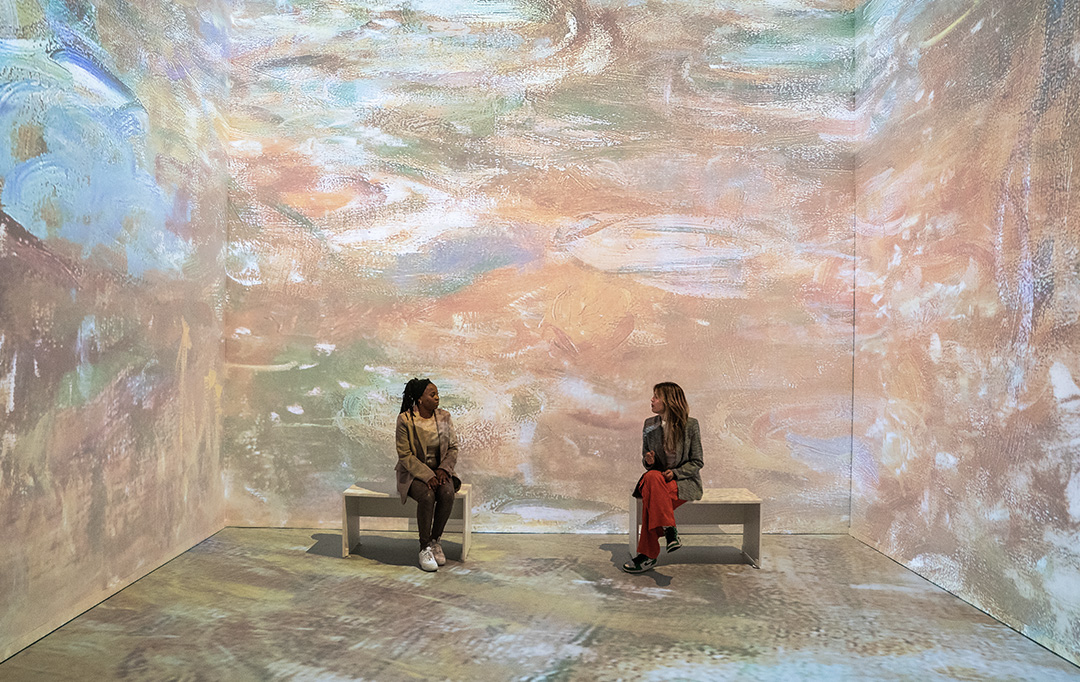 Master’s Art Felt Through Strolling, Monet’s Garden
"The exhibition is an experience for everyone - from young to old. Visitors wonderfully experience Claude Monet's world, his colors and famous works as if they were actually in the scenery. Colors, light, the projection of water - everything comes alive!"
[Monet’s Garden] Creative Director Roman Beranek
Opened in November on Wall Street in the heart of the Financial District in Manhattan, ‘Monet’s Garden The Immersive Experience’ explores the world of art created by Claude Monet who represents impressionist art. Creative director Roman Beranek is in charge of the exhibition taking place in the historic Seamen’s Bank building. The audience can have an immersive experience of walking in Monet’s Garden in a small French town of Giverny and viewing the artist’s paintings. In contrast to the large space provided for the exhibition, the audience goes through sensory stimuli that are small yet endearing through their eyes, ears, and even nose. 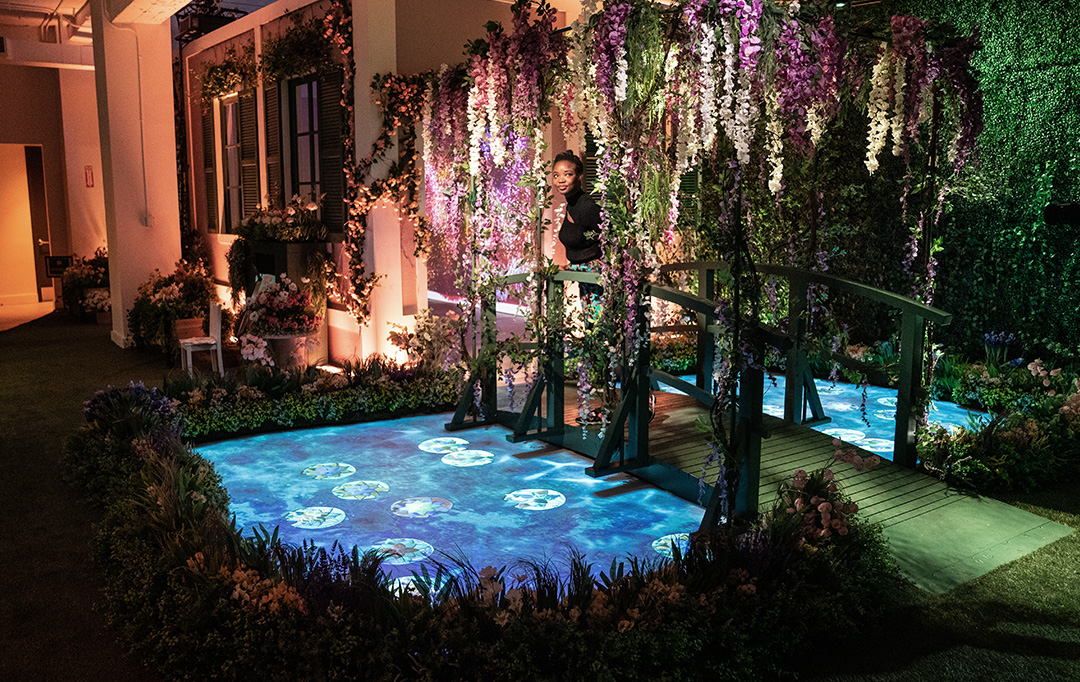 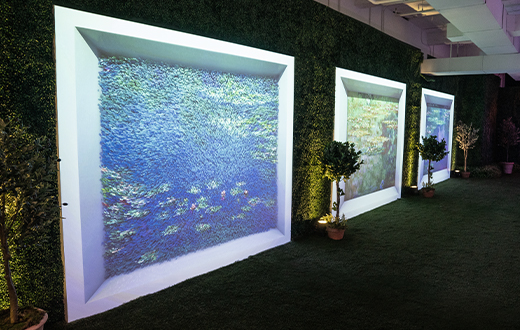 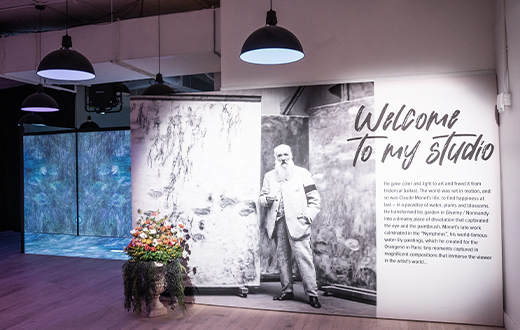 The sectioning of the exhibition hall, when compared to the Klimt exhibition, helps the audience hear the narrations about artistic inspirations that Monet had, while viewing his works. The space resembles Monet’s favorite place, the garden of Giverny, making it easy for the audience to imagine themselves in his garden filled with the real lavender scent as they listen to Monet’s story. 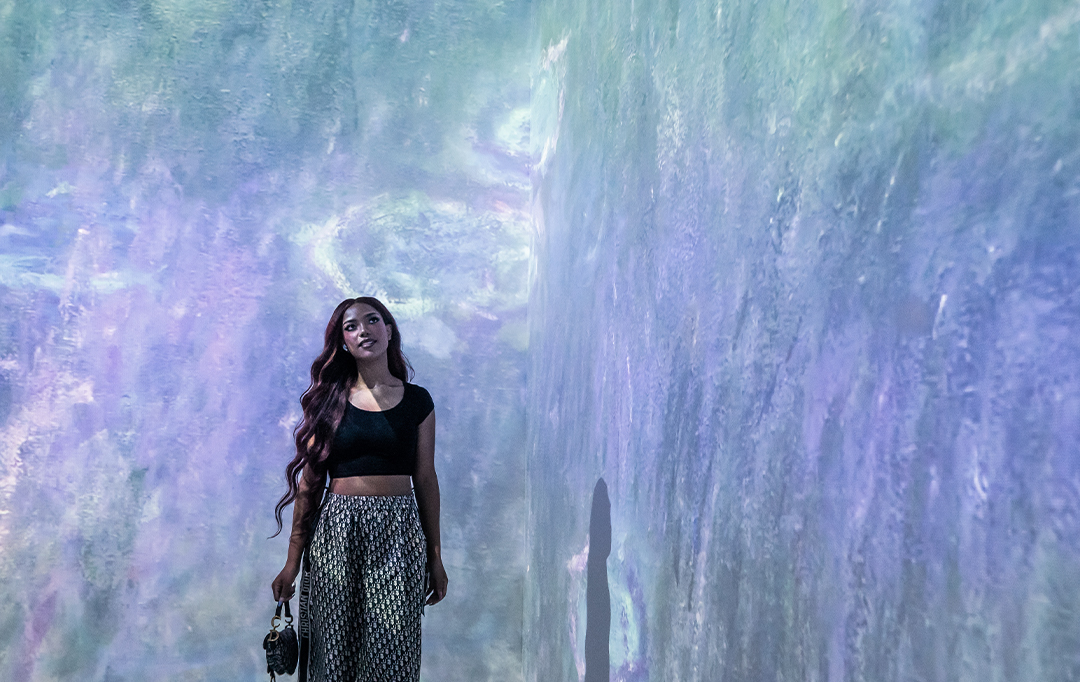 Starting with the 1874 painting titled ‘Impression, Soleil Levant’ which signaled the birth of the expression, impressionist art, the exhibition reaches the grand finale at the room of waterlilies, Monet’s most-acclaimed work covering the entire surface space of the room.
Swiss creative lab Immersive Art AG and German art and entertainment promoter Algeria Konzert GmbH partnered to design the event. The show will continue through February. 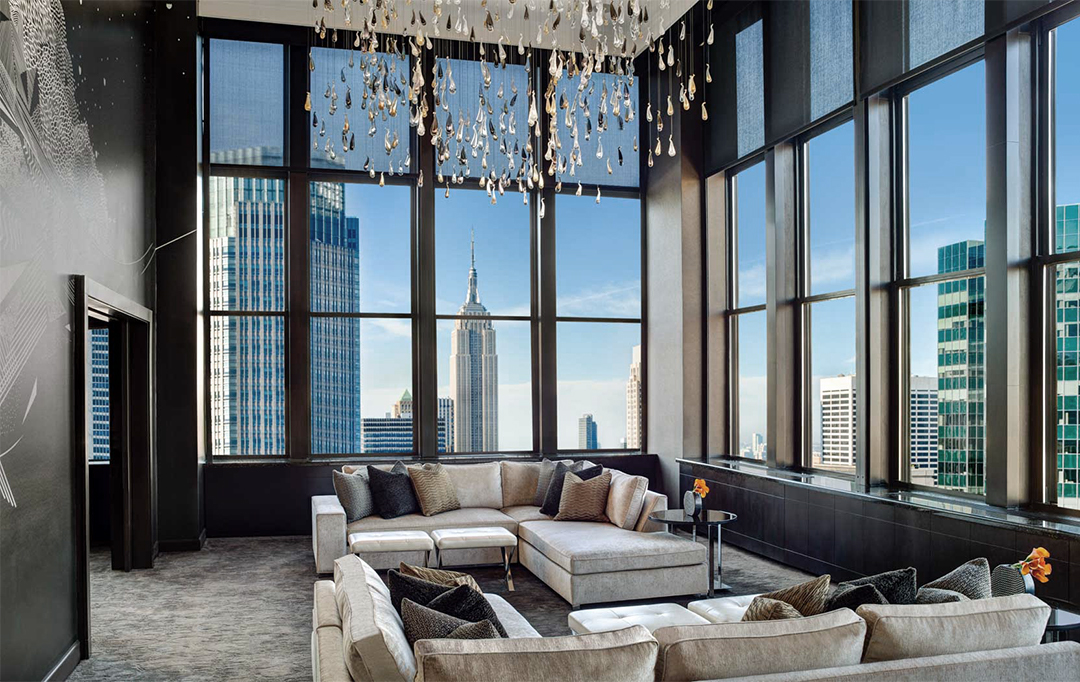