Gourmet Meals at Lotte Hotel
Seoul has emerged as the new gourmet destination for the 21st century. And Lotte Hotel in particular, boasting three restaurants with Michelin stars, is developing into a world-class gourmet hotel.
Making the right choice takes a lot of work. Even when we're trying to choose something small, we go on search engines and read reviews on blogs. And when it comes to food that we eat, we can be even pickier. There have been many guidelines to define gourmet food, and Michelin Guide has become the most influential of them all this century. Launched by the French tire maker Michelin in 1900, the guide gives out 'étoile,' or stars, to restaurants. And the competition to win one often gets heated all over the world. And Lotte Hotel boasts not one, but three restaurants with those coveted stars. Lotte Hotel Seoul's Pierre Gagnaire à Séoul received two stars from . Stay and Bicena at Lotte Hotel Signiel Seoul each earned a star from . Lotte Hotel is the ultimate gourmet destination in Korea. 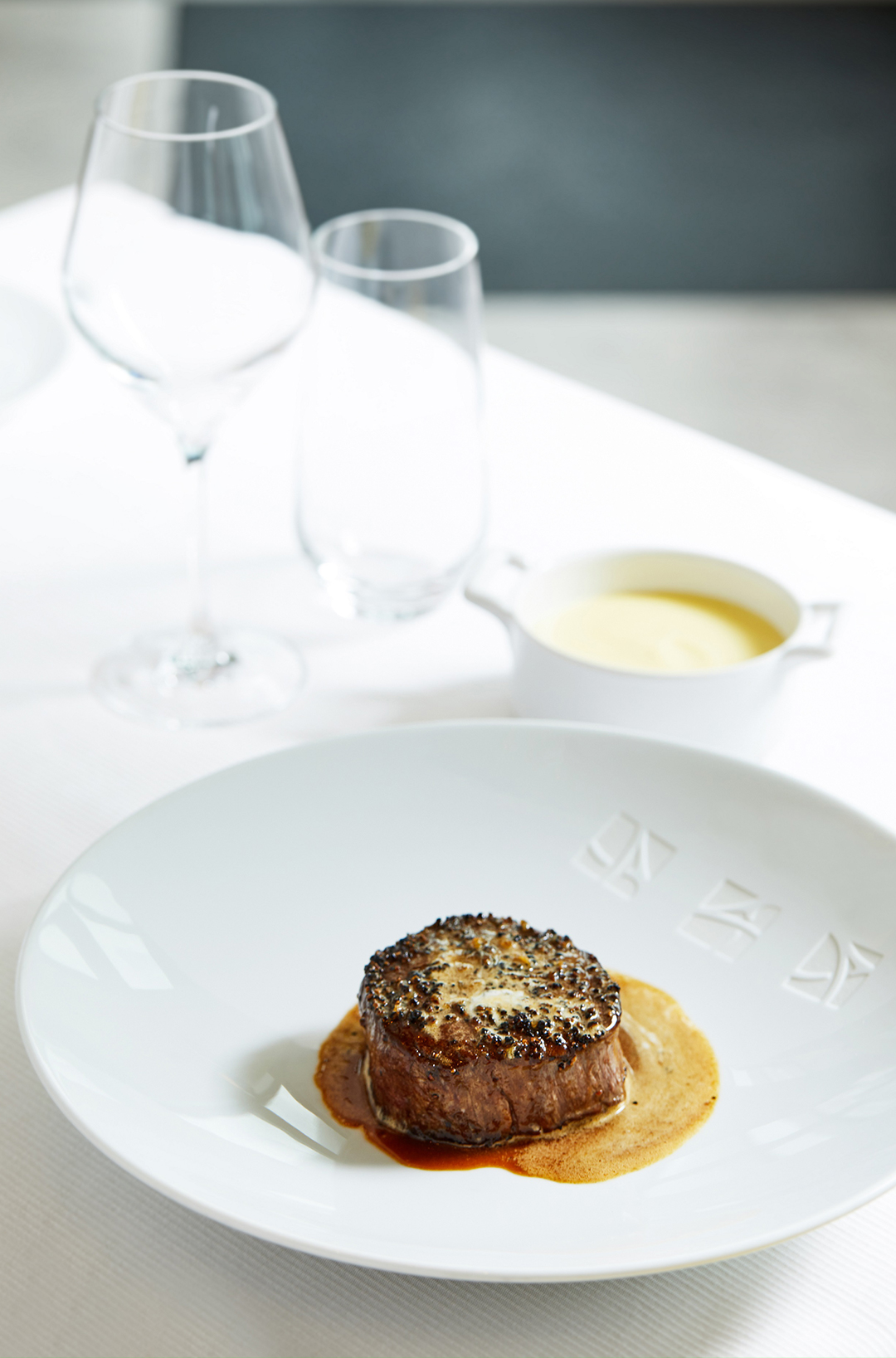 ‘Michelin Guide Seoul 2019’ 1 Star
France is a proud nation when it comes to its culinary culture, with its gastronomic meal having been honored as UNESCO's intangible cultural heritage. And the French chef Yannick Alléno is hailed as an 'emperor' of the cuisine there. In 2015, Alléno was listed as one of the world's top 10 chefs by the magazine. In 2014 and again in 2017, he won three stars from ,Signiel Seoul's Stay, which Alléno opened in April 2017, is a high-end modern French restaurant, and earned a star from just a year after its opening. It's located on the 81st floor of the tallest hotel in Korea. The interior was done in a black-and-white concept, with gold decors giving it a modern and elegant feel. Thierry Le Quéau, a protege of Alléno, is the executive chef today, and has followed in the footsteps of the master with creative and artistic dishes. Stay uses seasonal ingredients of Korea to reflect the latest French trends, and serves dishes more inspired and original than those at any other French restaurants in Korea.
Reservation:  STAY 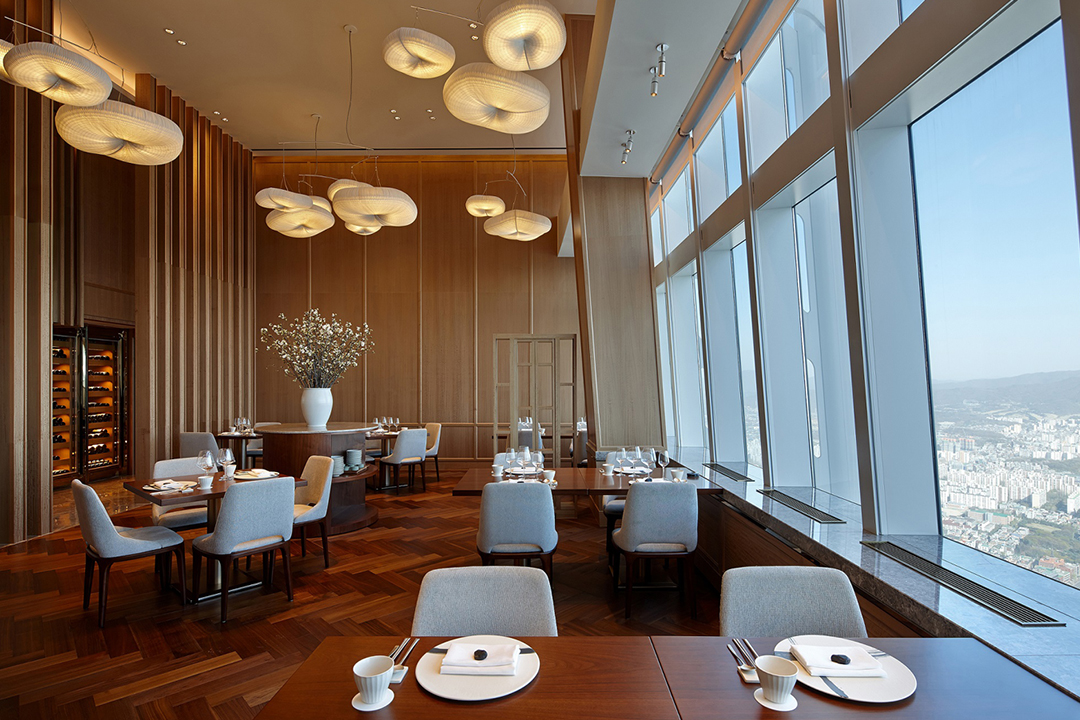 ‘Michelin Guide Seoul 2017, 2018, 2019’ 1 Star
The Korean wave is no longer confined to music (K-pop) and beauty (K-beauty). K-food has won over many taste buds in the U.S., Japan and other parts of the world. And Bicena is a Korean restaurant at the forefront of the globalization of Korean cuisine, as it serves international tourists in Korea. Alongside Stay, Bicena is located on the 81st floor at Signiel Seoul, and will allow you to experience the modern Korean food at a high level, both literally and figuratively. Bicena in Korean stands for 'emptying, sharing and filling,' and it serves dishes with authentic Korean tastes and flavors. It also brings forgotten dishes back to the table with a modern touch. Executive chef Jeon Gwang-sik is best known for traditional food for the nobility and royal court cuisine. His reinterpretation of traditional dishes has earned much acclaim from the and the rest of the gourmet community. His signature dishes are abalone dumpling, with abalone skin and stuffing of meat and vegetables, and shrimp gangeong, or fried shrimp ball covered in kuruma prawn.
Reservation: Bicena 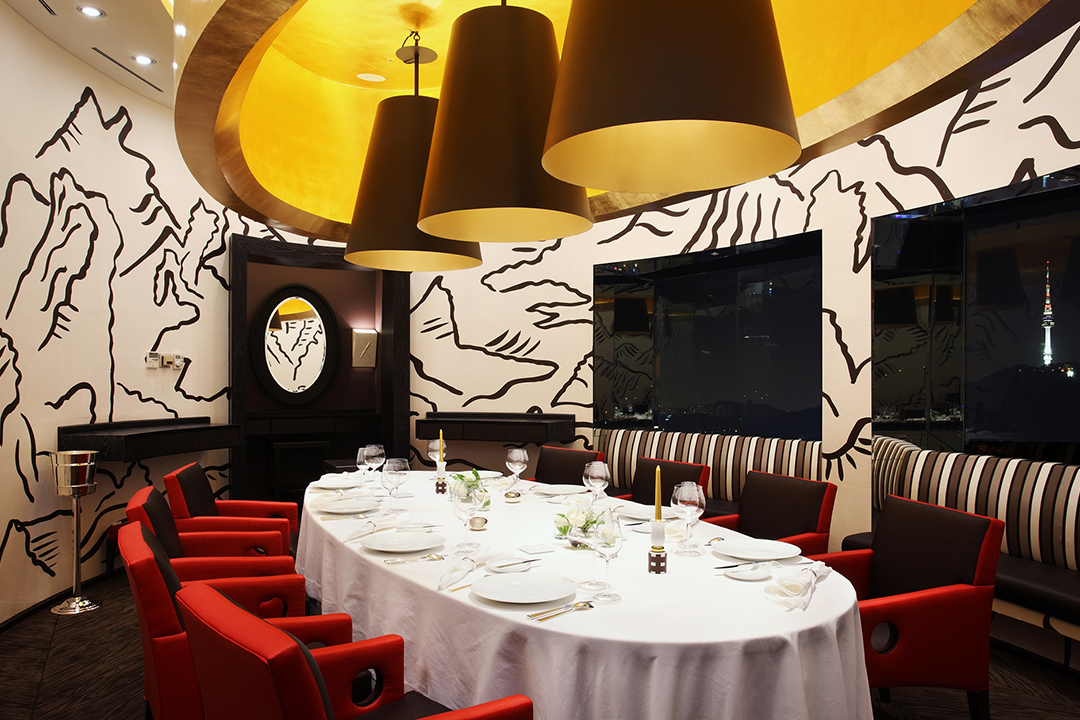 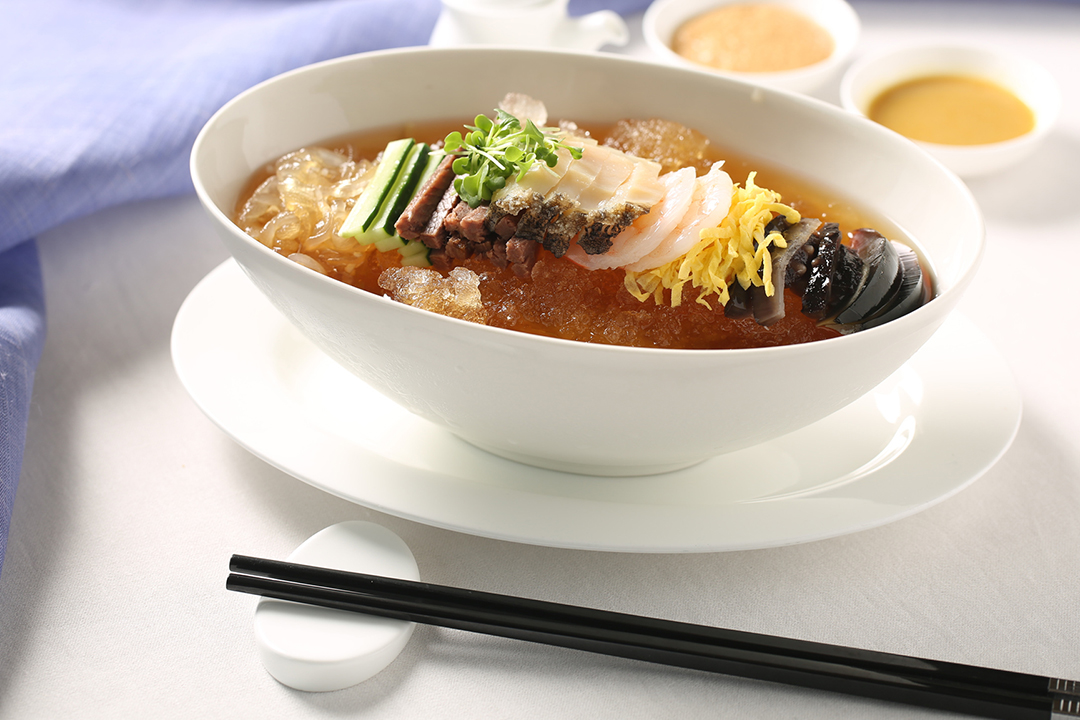 ‘Michelin Guide Seoul 2019’ The Plate
The Chinese restaurant Toh Lim and the Japanese place Momoyama have long been the faces of dining at Lotte Hotel Seoul. Toh Lim, situated on the 37th floor of Lotte Hotel Seoul's Executive Tower, is one of very few places in Seoul where you can enjoy quality, authentic Chinese cuisine. Executive chef Yeo Kyung-ok has been in charge since 2013, and Yeo has overseen a steady progress while demonstrating much creativity with his dishes, much to the delight of epicures. In , Toh Lim fell just shy of a star but earned 'The Plate,' awarded to places that serve quality food. The guide said, "Toh Lim offers a state-of-the-art Chinese fine dining. The restaurant is acclaimed for its expert handling of ingredients, whose natural flavors shine through in the individual dishes."
Reservation: Toh Lim

‘Michelin Guide Seoul 2019’ The Plate
Momoyama is a hugely popular spot for lovers of Japanese cuisine. The view from the 38th floor at Lotte Hotel Seoul will never fail to amaze you, especially at nights. Fishes used for sashimi change from season to season, and their plating will always bring a smile to your face. awarded Momoyama with 'The Plate' and said it is "a sophisticated Japanese restaurant" that offers a wide range of Japanese cuisine and an excellent service. Freshest of ingredients are used for the high-end omakase and the traditional multi-course kaiseki, and you can enjoy them with sake recommended by a sommelier from a list of some 40 choices.
Reservation: Momoyama 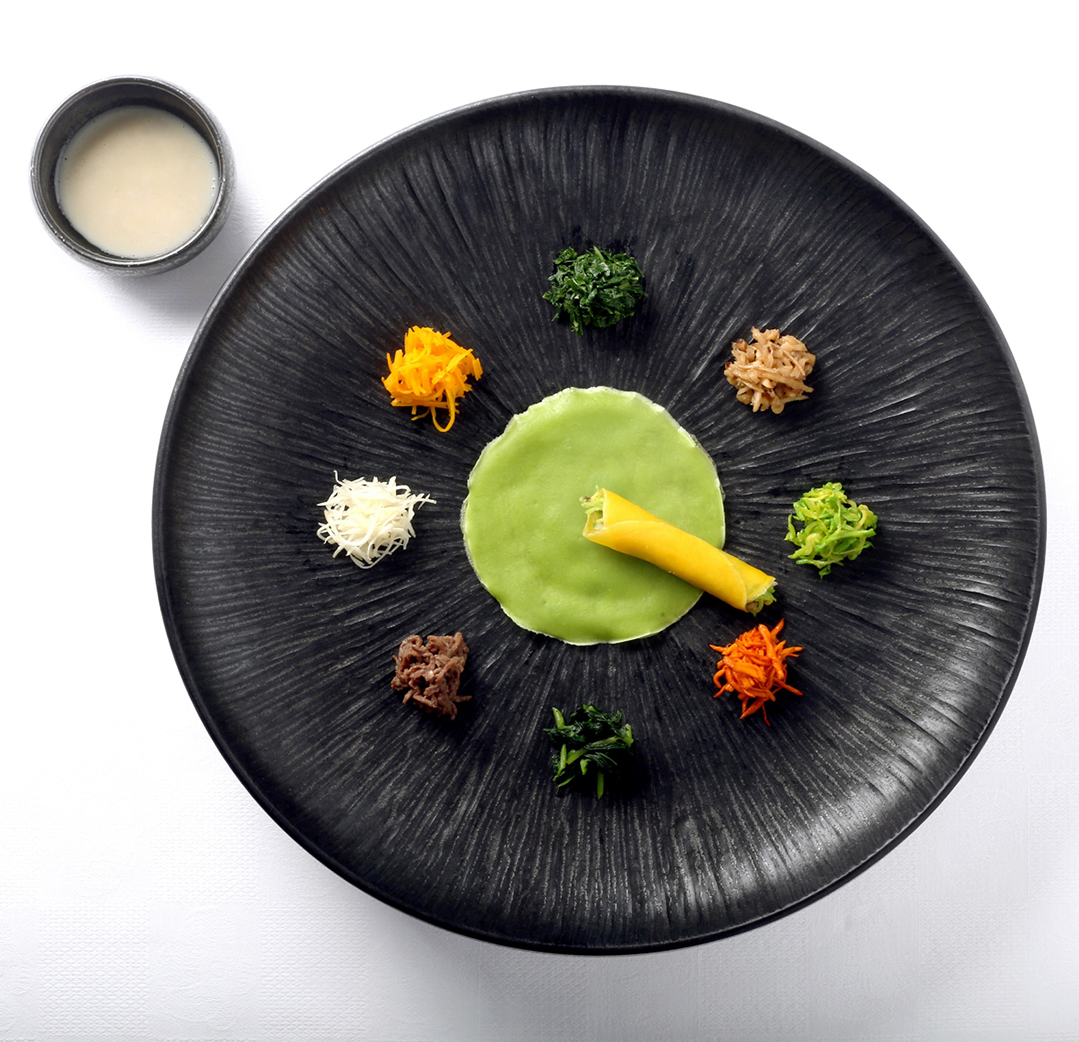 ‘Michelin Guide Seoul 2019’ The Plate
Lotte Hotel Seoul's original Korean restaurant Mugunghwa joined Toh Lim and Momoyama on the list of places with 'The Plate' from the . It's the oldest of the Korean restaurants at five-star hotels in Seoul. And it's taken on a contemporary look, in both its interior and menu, after renovation in 2010. noted: "Creating modern cuisine firmly rooted in traditional Korean fare, the chef is constantly studying to bring the tastiest yet also the healthiest food to the table." Mugunghwa operates on the principle and philosophy that food and medicine are essentially the same. Seasonal ingredients from across the nation help bring you quality modern Korean food.
Reservation: Mugunghwa

Aside from restaurants that made the , there are other places at Lotte Hotel that have won over epicures. Lotte Hotel Seoul's La Seine, the No. 1 buffet at a five-star hotel, is the one. La Seine can change its menus on a short notice depending on the quality of ingredients each day, and such versatility and flexibility allow it to always bring you the most delicious food. What makes La Seine truly special is that you get the best of Pierre Gagnaire à Séoul, Toh Lim, Mugunghwa and Momoyama all in one place.If you're just entering the world of gourmet meals, La Seine is a perfect starting point. From there, you can move on to Pierre Gagnaire à Séoul, Toh Lim, Mugunghwa and Momoyama. That way, you'll get a full experience of gourmet meals offered at Lotte Hotel.
Reservation: La Seine 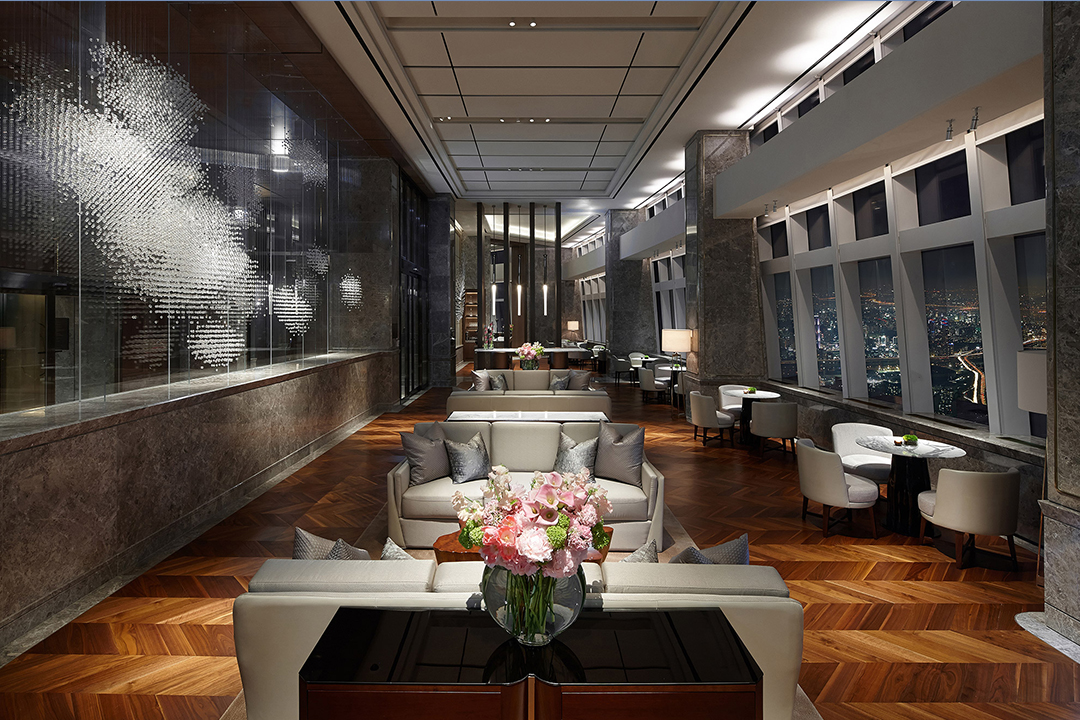 In addition to Stay and Bicena, Signiel Seoul is also popular for its lounge, bar and the deli shop Pastry Salon. The Lounge and Pastry Salon serve dishes and desserts following recommendations and consultation from three-Michelin-starred chef Yannick Alléno. And they're available at competitive prices, too, allowing more people to get a taste of Michelin-starred food. Sandwiches and pastas range from 20,000 won to 30,000 won. Le Gouter SIGNIEL, a French-style afternoon tea set, features a tea collection from Dammann Frères, the luxury tea brand of 320 years in history. Signiel's specialty coffee, with seven of the world's finest beans blended to perfection by expert baristas, is not to be missed.
Reservation: The Lounge