Korean Restaurant Mugunghwa, Satisfying All the Senses and More
Will Season 3 at Mugunghwa, the Korean restaurant at LOTTE HOTEL SEOUL, begin? We asked Mugunghwa's executive chef, Oh Tae-hyun, about the present and the future of his restaurant.
Mugunghwa has set a lot of "firsts" and "bests" in its history. It opened in 1979, together with LOTTE HOTEL SEOUL. At 40 years and counting, it's the oldest Korean restaurant at a five-star hotel. Season 2 began in 2010, when a 5 billion won renewal transformed Mugunghwa into a private dining Korean restaurant with seven rooms. The menu also went through an overhaul. Mugunghwa is no longer serving single dishes and is instead focusing on exquisite course meals. The restaurant relocated from the first floor to the 38th, the highest level at LOTTE HOTEL SEOUL, to give patrons a beautiful view of downtown Seoul. Housed in a hotel frequented by tourists, Mugunghwa has contributed to the globalization of the Korean cuisine, serving foreigners authentic Korean food of highest quality. While Korean restaurants at other hotels were shutting down under financial hardships, Mugunghwa took a major step forward with bold changes. 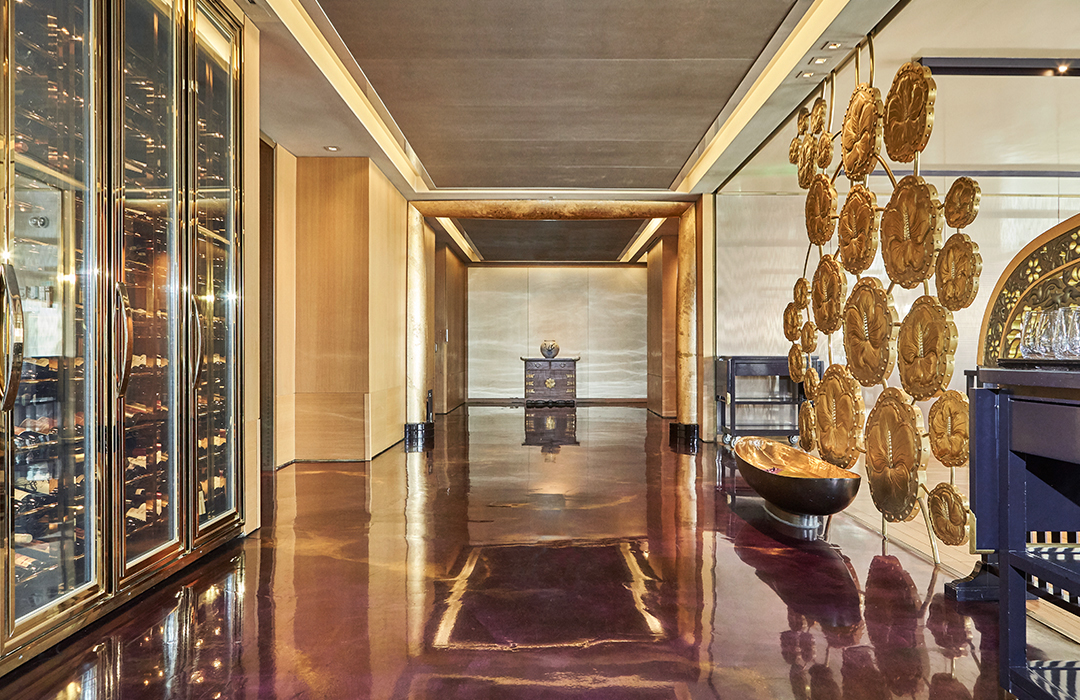 The gold-decorated entrance. The wine cellar is filled with wines that make perfect pairings with Korean food.

And it was around this time that Oh Tae-hyun, now Mugunghwa's executive chef, joined the restaurant. He arrived at LOTTE HOTELS & RESORTS in 1988 in the Western cuisine, and his switch to the Korean food may have raised some eyebrows. "I wanted to take on this challenge because I wanted to apply plating and cooking techniques of the Western food to the Korean cuisine, so that it could help with the globalization of the Korean food," Oh said. And he was at the forefront of Mugunghwa's transformation. In 2016, he traveled to Yangon, Myanmar, to help with the opening of Mugunghwa at LOTTE HOTEL YANGON for about a year and a half. To serve the Korean food in its most authentic form, rather than in Myanmar style, Oh visited farms in Yangon and brought ingredients from Seoul. Making naengmyeon (cold noodle soup) was the most difficult part, Oh recalled, but he laid an important foundation for the authentic Korean cuisine in Yangon. 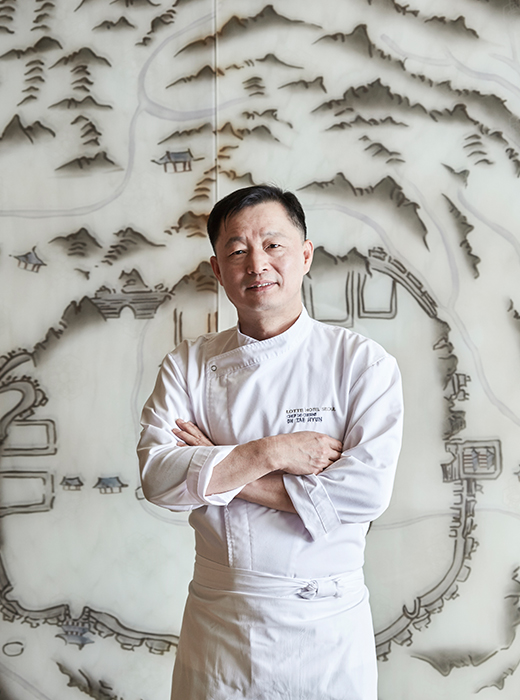 "By having our chefs approach guests personally, we go beyond satisfying all of their senses and allow them to enjoy a comfortable dining experience."
Executive chef at Mugunghwa Oh Tae-hyun
Oh's next step took him back to Mugunghwa in Seoul. He has been the restaurant's executive chef since February 2018. Oh, who said he's been cooking for three decades on the concept that good food can be good medicine, may just be the perfect chef for Korean food. Since the launching of “Michelin Guide Seoul” in 2016, Mugunghwa has won the 'Plate' every year. Oh said his goal is to win the coveted Michelin star this year, and he spoke to us about the restaurant he's running. He is an open-minded leader who eschews the top-down structure and who prefers to motivate his employees to be proactive at workplace. And he says nothing pleases him more than having a patron thank him for great food. How will Mugunghwa evolve on his watch? 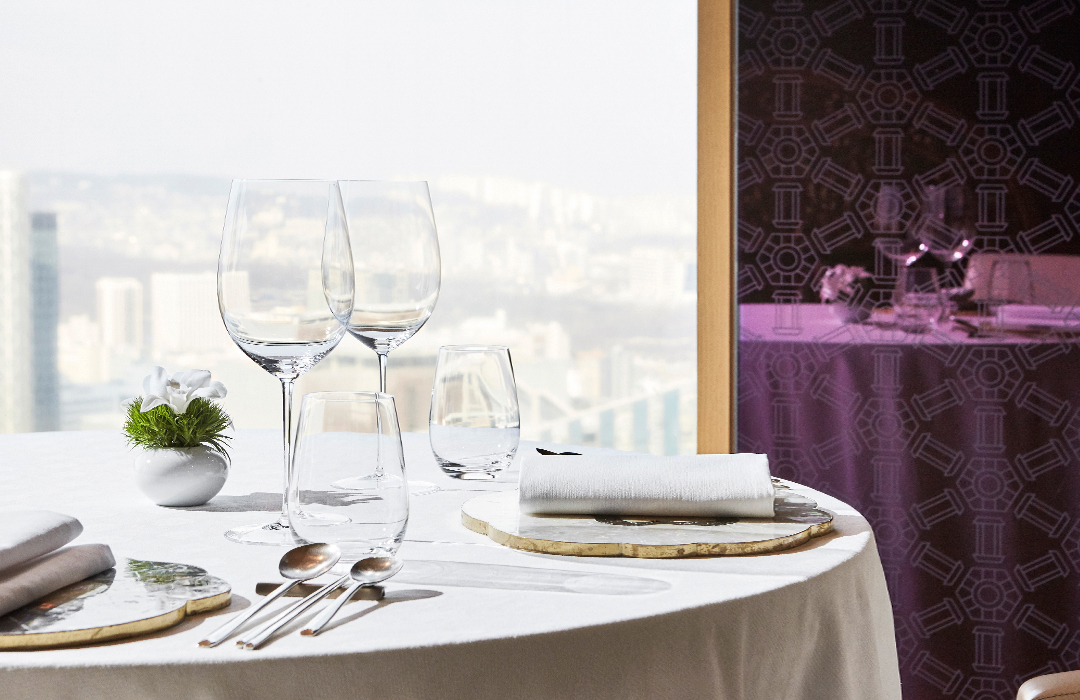 Q. The 'New Korean Cuisine' has been turning heads for several years now. Mugunghwa has stuck to the more traditional style. Has that changed at all?
A. We're still trying to stick to our roots of the traditional style without deviating too much. Mugunghwa has its foundation in the Joseon-era royal cuisine, and serves meals for the noble family and local specialties with a contemporary twist. We also serve samgyetang, nuts and red bean porridge for holidays or other special occasions.

Q What's the most important part of running Mugunghwa?
A. When I try to put together the menu, I think of the harmony of food. I carefully check food chain and environments in which ingredients grew. For instance, I use kelp for sauce or garnish for abalone dishes because abalone preys on kelp. The key is to continue to study these characteristics of ingredients so that we could retain their natural tastes and flavors.

Q. Selecting ingredients must be really critical.
A. We choose from seasonal ingredients from Korea. The Korean cuisine offers a lot of healthy dishes where ingredients offer beneficial nutrients through fermentation. Think of hot pepper paste, soy bean paste, salted, preserved food and kimchi. We use sauces made by masters and red bean paste, Jeju green soy bean paste and Ulleungdo red potato, listed on the Ark of Taste (an international catalog of endangered heritage foods compiled by Slow Food). For our kimchi, we pickle cabbage in bay salt, after having its bittern removed for two years, and add yeasted salt to give kimchi refreshing taste and crunchy texture. 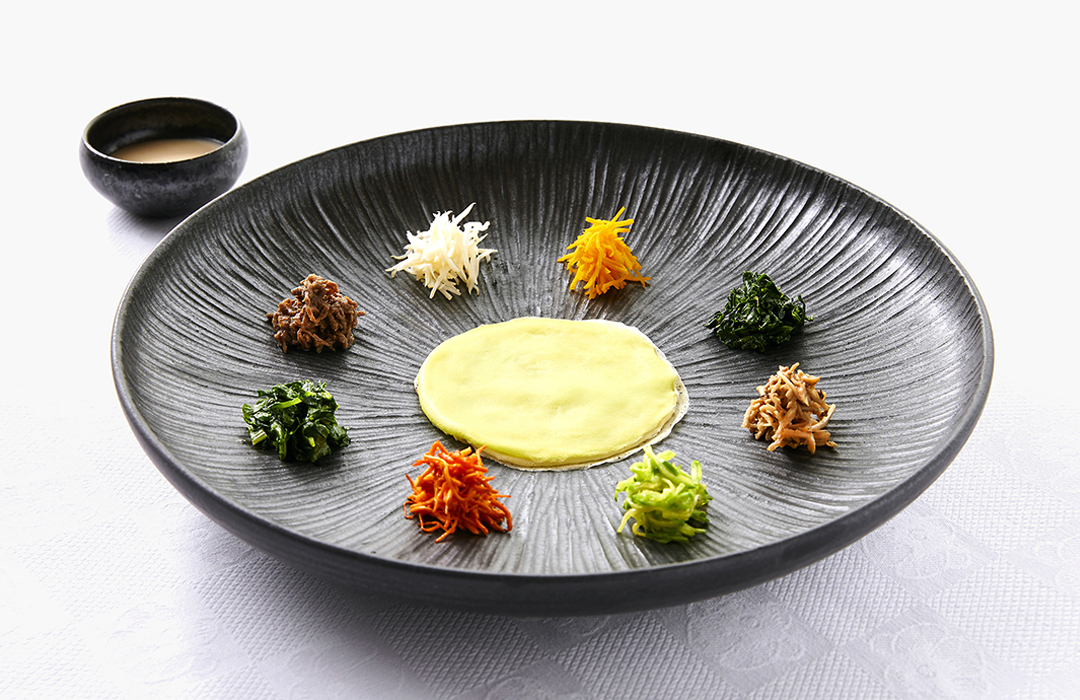 Q. You must have different menus for each season.
A. Absolutely. We come up with new menus every quarter. Last year, we served bangpung (coastal hog fennel) and young rays in spring, spotted cantaloupe and red potato in summer, white croaker and Siberian gooseberry in autum, and finally yellow tail and longevity spinach in winter. We form a task force each month to bring our patrons all types of ingredients. This year, we will travel across the country in search of new ingredients and serve different menus for each season.

Q. Have you created any new dishes along the way?
A. There are different styles of bibimbap in different regions. At Mugunghwa, we've been serving bibimbap with herring roes. I stumbled upon pickled herring roe while touring Gangneung area. It went great with rice, thanks to its rich taste and flavor, and I felt I could use it at the restaurant. For our bibimbap, we add some seasoning to pickled herring roe and top it with abalone seasoned for four hours and crunchy kimchi. Herring roe has some seasoning on its own and we ended up not adding extra spice or sauce to bibimbap. That makes our offering unique. 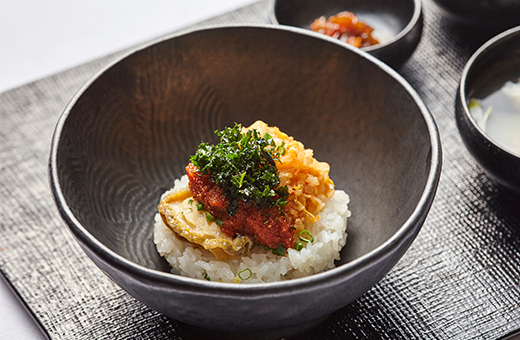 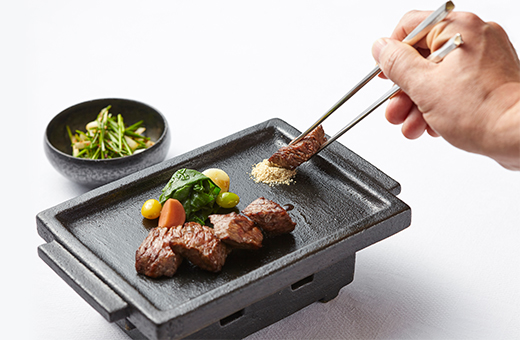 Q. What other dish would you recommend?
A. I would recommend roasted Daegwallyeong hanwoo beef sirloin. Mugunghwa only serves beef from cows bred in Daegwallyeong, which sits 700 meters above sea level. The National Agricultural Products Quality Management Service oversees every step of the way, from the raising of the calf to breeding, butchery and retailing, so you can really trust our hanwoo. This brand is of such high quality that it was served during the opening and closing ceremonies of the PyeongChang Winter Olympics. We added the scent of hardwood charcoal to maximize the beef's flavor. On the side, we serve 'Salt with 9 Flavors.' We mix bay salt from Shinan, with bittern extracted for three years, with ginseng, Chinese yam, onion, sesame seed and shiitake, among nine ingredients. It has a great flavor with low salinity, which makes it a fine dip for hanwoo.

Q. This year marks the 40th anniversary of Mugunghwa. There must have been some changes even as the traditions have been kept in place.
A. We've been trying to highlight a more humane dining experience and communication with our guests. Since the start of 2019, to promote interactions with patrons, our chefs walk up to our guests and greet them personally. And this type of communication at the restaurant helps lay foundation for new menus. We are able to go beyond satisfying all the sense for our customers. And we can also identify their needs and help them enjoy a comfortable dining experience. 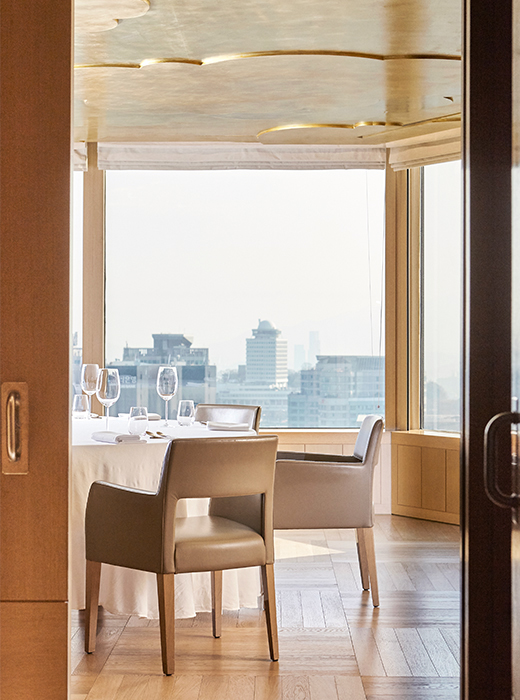 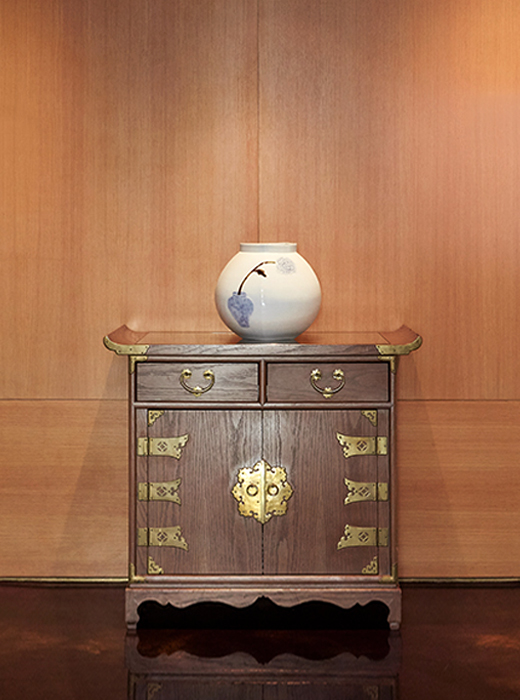 Ham box and pottery inside the restaurant

Q. Do you have special events scheduled to celebrate the anniversary?
A. Not only is this the 40th anniversary of Mugunghwa, it's also the 40th anniversary of LOTTE HOTEL SEOUL. To commemorate the occasion, we're planning a special event with the Japanese restaurant Momoyama for early May. We have collaborated with foreign chefs before but we've never worked with another LOTTE HOTEL SEOUL restaurant. We are proud to be part of this celebration. We're going to serve a course meal featuring Korean and Japanese dishes. We've been meeting once a week to discuss ideas. 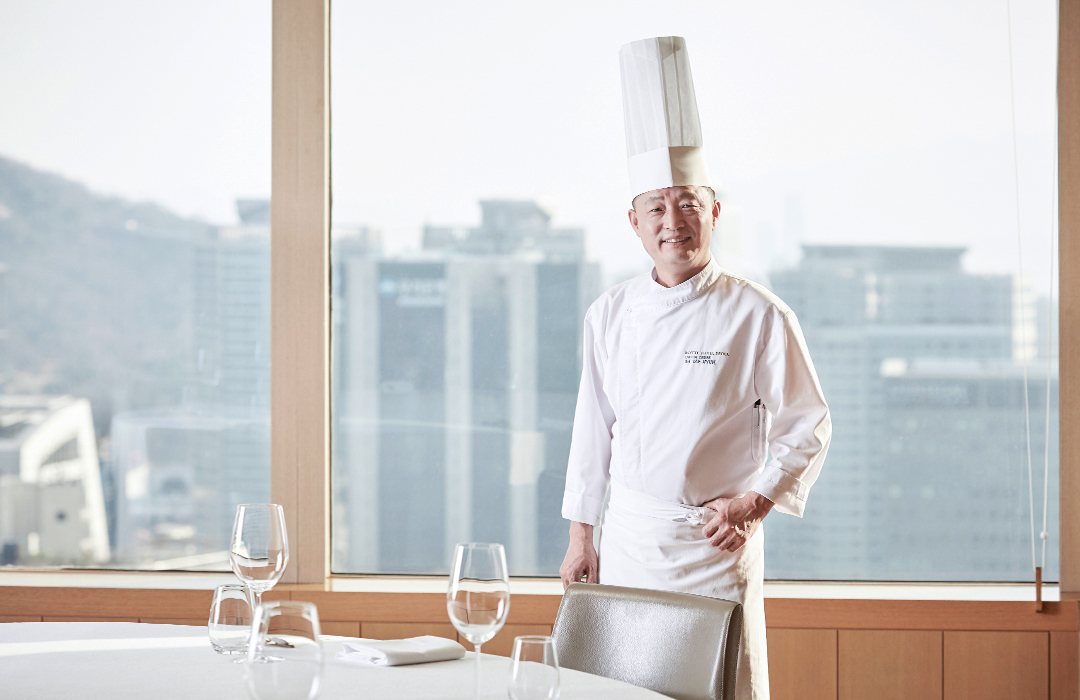 Q. Tell us about future plans for Mugunghwa and for yourself, and how you'd like to see the restaurant evolve in the future.
A. Modern consumers have become quite demanding about healthy food. Organic food and vegetarian meat have grown popular. And fermentation is a global trend for much the same reasons. As I said, the Korean food has its roots in fermented food, such as hot pepper paste, soy bean paste and kimchi. In terms of fermentation, the Korean cuisine is second to none. We at Mugunghwa will try to keep this tradition alive and will continue to serve you healthy dishes using natural, homegrown ingredients and sauces by masters. We'll also interact with our guests and keep improving our dishes. If we can keep coming up with fresh menus for each season, then I think both Mugunghwa and the traditional Korean cuisine will naturally get better and better. 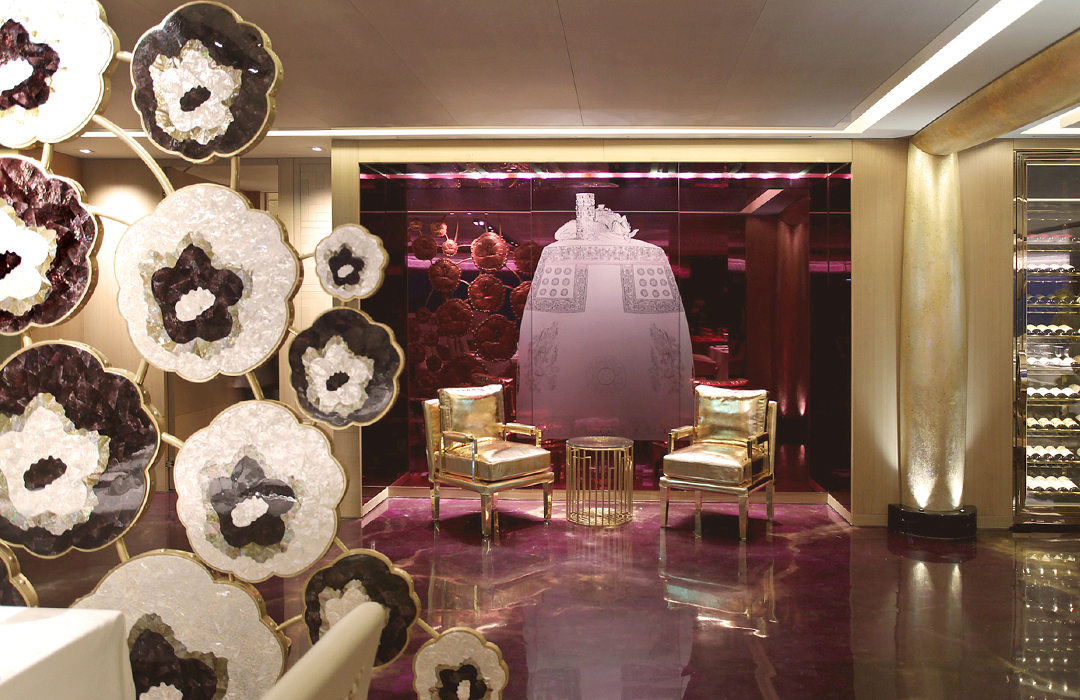