Why Lotus Flowers Bloom in Buyeo
Lotus flowers begin blooming in early summer and peaks in July. The lotuses and water lilies in full glory at Gungnamji Pond in Buyeo are not just for pleasure to the eyes. They are repurposed as an ingredient for a savory yeonnipbap, or sticky rice steamed in a lotus leaf.
Raison d’Etre of Lotus in Buyeo
Buyeo is a place tourists purposefully visit for the sighting of lotus flowers, as the Korean variety does not grow in wild but is raised in a pond or swamp. Hearing the word Buyeo, Koreans would think of the ancient kingdom of Baekje and then lotus flowers. In fact, the lotuses in Buyeo do not have that long a history. Compared with the history of Baekje founded 18 B.C., the time passed since the first lotus planting in 2001 feels like an instant. The traces of Baekje, however, make Buyeo’s lotus flower ever more special. King Mu of Baekje is associated with the lotus flower. Gungnamji Pond, the oldest artificial pond in Korea, has its surrounding 330,000-square-meter area filled with lotuses and water lilies. 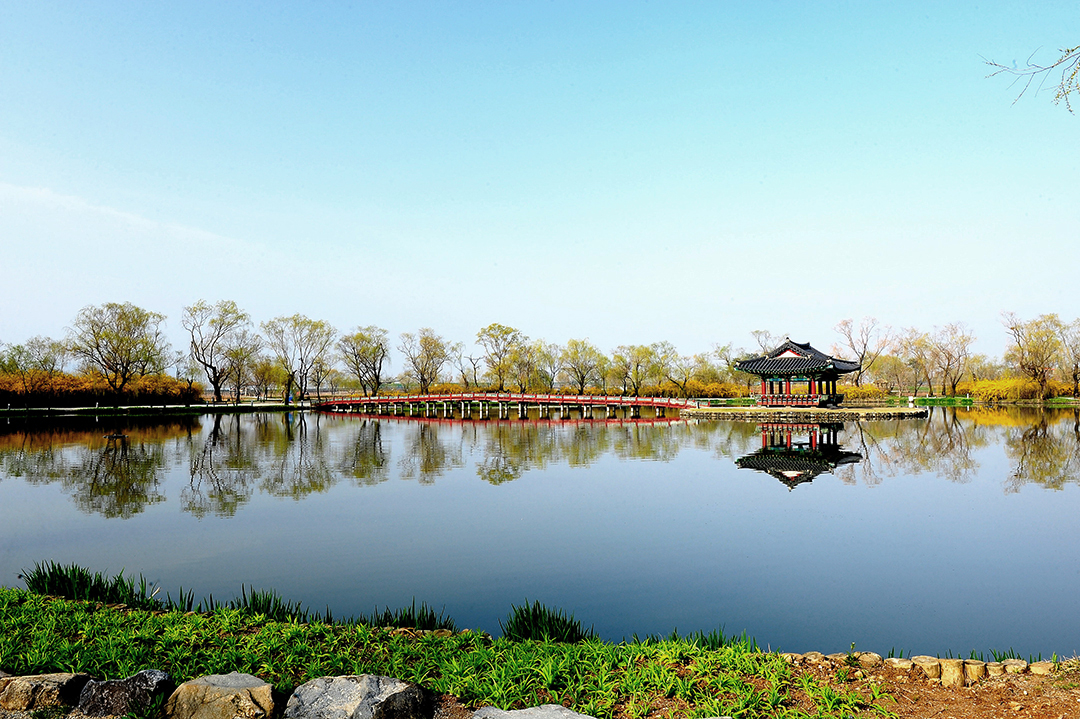 Before the lotus pond in Buyeo became what it is today, Gungnamji Pond and the surrounding area were extensive swamps. After going through maintenance in the 1960s and excavation survey in the 1990s, Gungnamji Pond was restored, and Buyeo County Office planted red lotuses in the swamp near the pond. There’s no record of Gungnamji Pond being intended for lotus flowers during the construction under the command of King Mu. However, the fact that the lotus flower is the symbol of Buddhism and that Buyeo was the capital of Baekje when Buddhist culture was thriving hints at a possible association. The water-purifying effect of lotus flowers must have helped clean the swamp that had been left untouched for a long time. The lotus flower, viewed in relation to the history of Baekje, has become a top attraction of Buyeo. There are currently various types of lotuses growing in Gungnamji Pond including the red lotus, white lotus, prickly waterlily, and Victoria lotus. 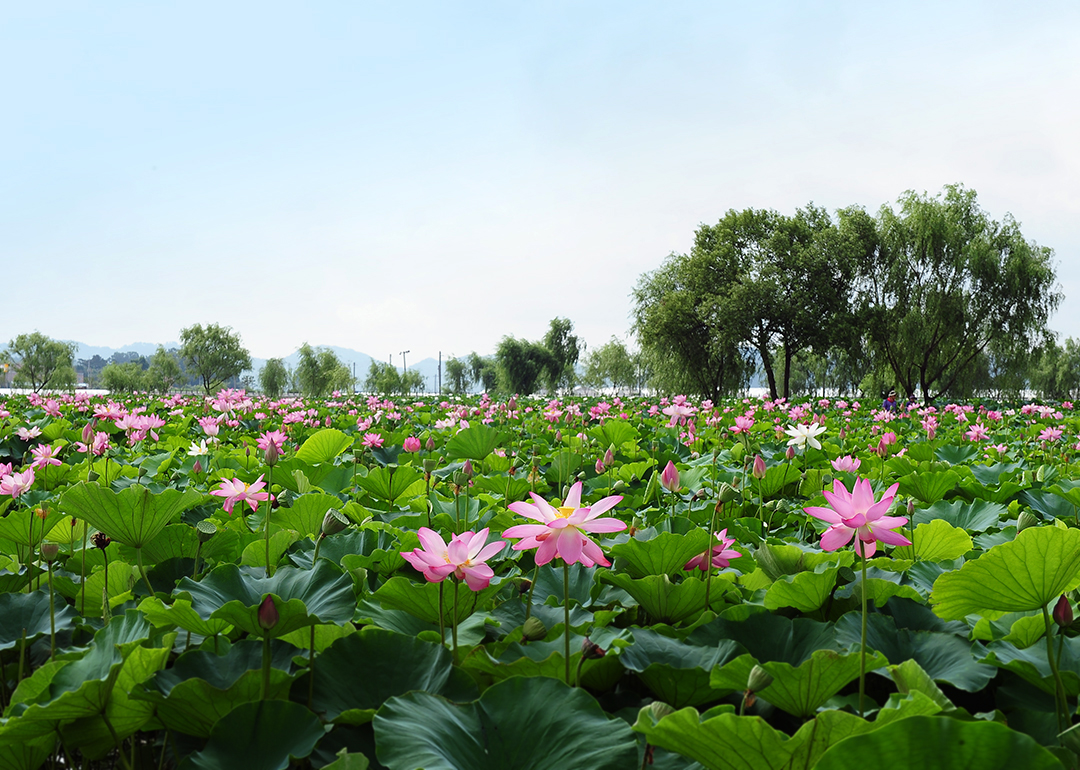 Enjoy the Lotus with Five Senses
The lotus flower starts blooming early summer, around June, and fully opens in July. Since 2003, every July when the lotus flower is most beautiful, the Buyeo Seodong Lotus Festival is held at Gungnamji Pond. A festival is not complete without food. With the inauguration of the lotus festival, local restaurants started using the lotus leaf as a delicacy. As a source of food, the lotus offers its entirety, from the root to the flower, for nutritious cooking. The most popular dish is yeonnipbap using the lotus leaf. It is known as temple food that monks would eat while going through discipline. Yeonnipbap, which translates directly into ‘lotus leaf rice,’ is sticky rice, lotus root, and pine nuts steamed together in a lotus leaf wrap. Restaurants in Buyeo offer a healthy meal featuring a savory yeonnipbap, and it is the best way to taste the rich flavor of the lotus. Lotuses at Gungnamji Pond recently began flowering. It is the perfect time to enjoy Buyeo’s lotus flowers with all five senses. 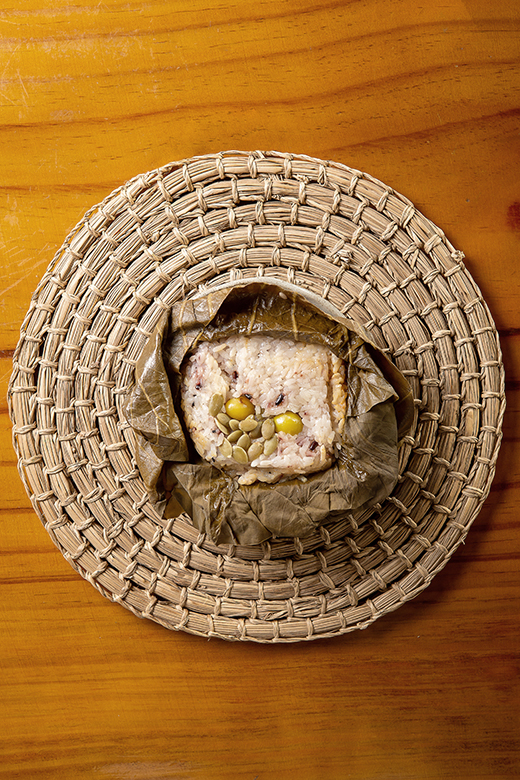 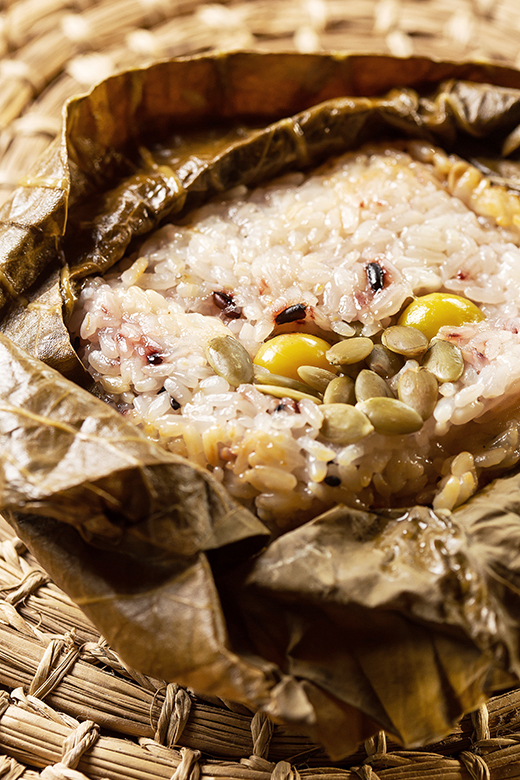 Yeonggot Iyagi
Once you visit Korean restaurant Yeonggot Iyagi, meaning ‘a lotus flower story’, it’s hard to forget about it. You can’t find another mushroom-shaped building in Buyeo. Started as a tea house, Yeonggot Iyagi is now a restaurant offering diverse lotus dishes. Yeonnipbap, chewy and savory, is a delicacy on its own, but you get an array of other dishes such as soybean paste stew, grilled mackerel, deep-fried ginseng and lotus root, and smoked duck with seasoned vegetables, just by ordering the rice meal. Yeonggot Iyagi directly sources the lotus from the lotus pond right next to the restaurant. Thanks to the reliable source, they use the lotus in the bean paste and salad dressing as well, albeit undetectably. In fact, that’s how they provide their customers with dishes that anyone can enjoy. Such an approach has led to the creation of other lotus recipes. Along with yeonnipbap, another recommendation from the menu is lotus mushroom hot pot using lotus root and lotus ovary.  It began as a seasonal item for winter, but became a staple due to the positive customer response. Popular to children is lotus pork cutlet. There’s no better place for men and women of all ages to enjoy the lotus meal together. 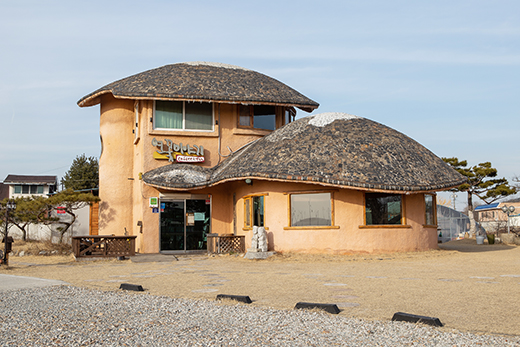 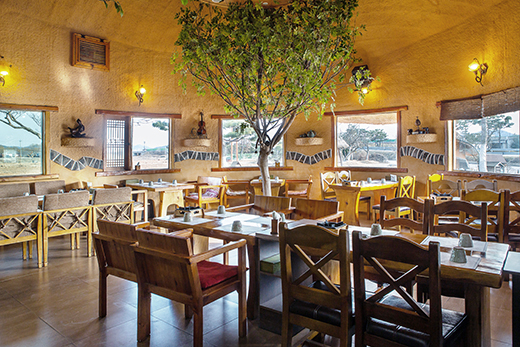 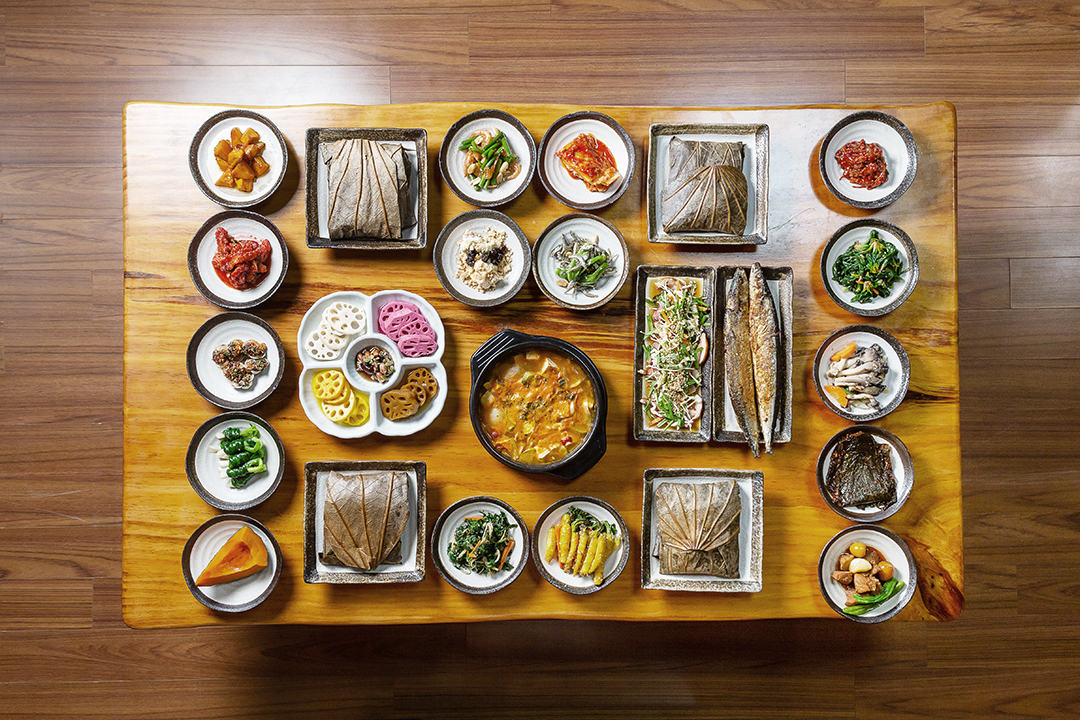 Yeonggothyang
You might wonder if you’ve ordered yeonnipbap as you intended, once you’re served with all the food they put on the table. One after another, over 10 side dishes are arranged. Yeonggothyang, once called Yeonhwahyang, is a Korean restaurant run by mother and son. The mother has 25 years of experience in cooking. Colorful lotus root dishes, grilled saury, and smoked duck are presented with seasonal vegetables and other side dishes. As of May, currently-served vegetables are spicy seasoned shepherd’s purse, blanched scallion sashimi, and seasoned sedum. All cooked with the ingredients raised by the owner herself, the vegetable dishes make you feel the loving touch of an experienced cook. The aroma of perilla oil will make your mouth water. Open the neatly-folded lotus leaf and gather the rice grains to the center. Take a spoonful and add seasoned shepherd’s purse to eat. The carefully-selected side dishes are not too heavy on the palate and soon enough, you will be surprised to find them emptied out. Healthy and satisfying, the meal at Yeonggothyang will get you to wholeheartedly say, “Thank you for the great meal.” 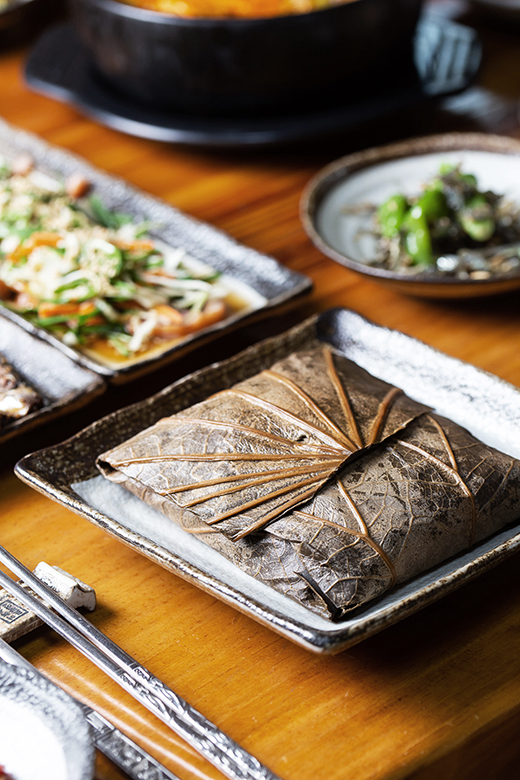 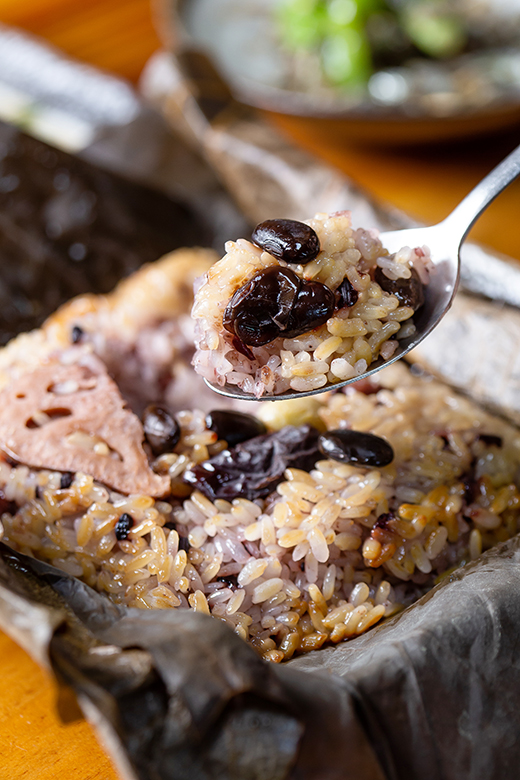 Address 25 Gungnam-ro, Buyeo-eup, Buyeo-gun, South Chungcheong Province
Phone +82-41-837-000
Where to Stay in Buyeo: LOTTE RESORT BUYEO
LOTTE RESORT BUYEO is a one-stop resort where shopping, leisure, and the culture of Buyeo can all be enjoyed. Within 10 minutes of walking is LOTTE Outlet Buyeo, and 5 minutes of driving will take you to Baekje Cultural Land as well as LOTTE Skyhill Buyeo CC. It takes 20 minutes by car from the resort to Gungnamji Pond where the lotus festival is held. The exterior of the resort using the color scheme inspired by nature adds a special touch. 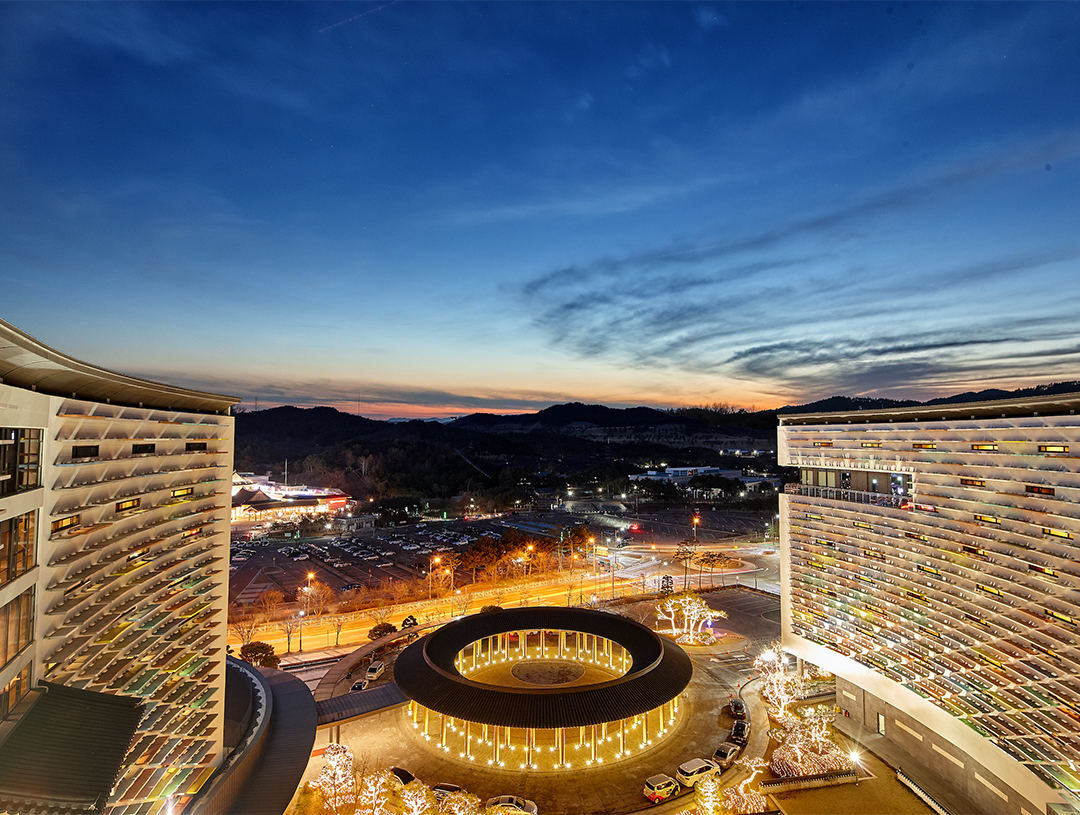 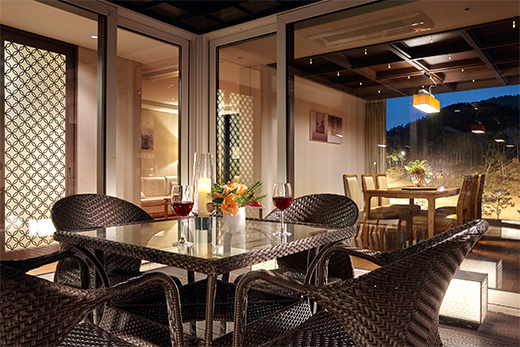 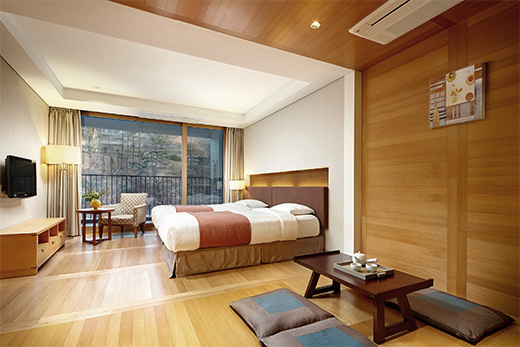