Black Pork, Nice To Meet You
It makes our mouth water. Time travel in search of black pig!
"In the late 1980s, at the height of research on natural breeds, four female pigs and one male pig were purchased for pure line breeding. More than 7,000 pigs were sent to farms, and 265 pigs are being preserved at the Livestock Industry Promotion Agency." 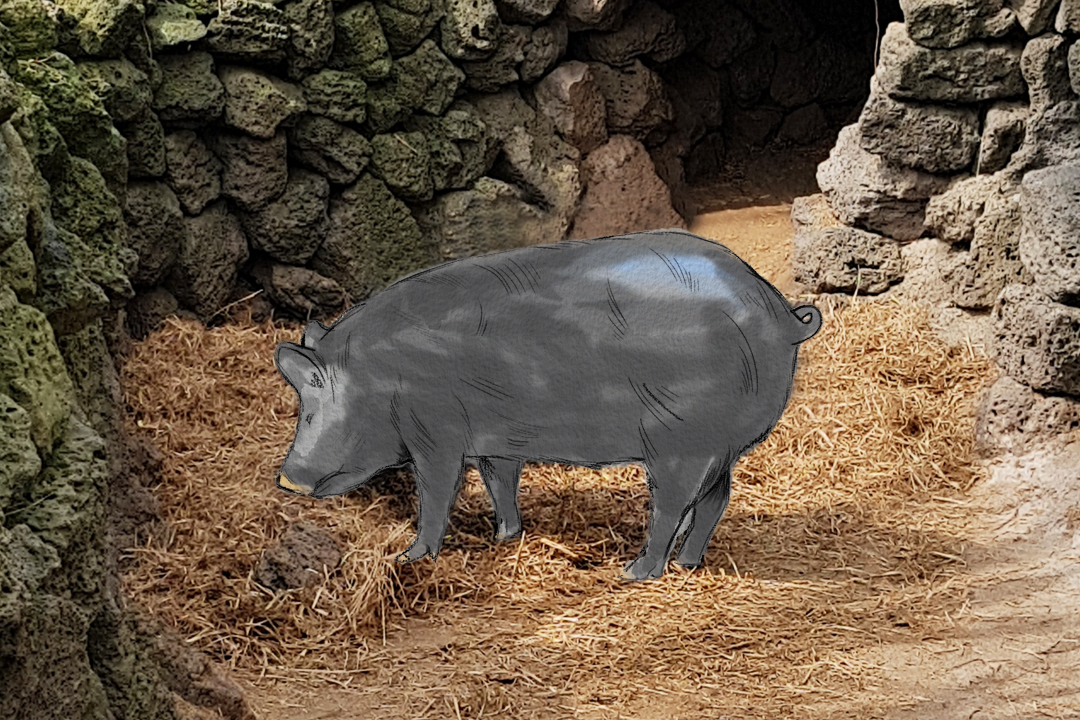 In Jeju, pork was served at town parties. When neighbors shared meat with one another, they chose pork over beef. By custom, people always gave liver, lungs and other intestines to their relatives or neighbors first.

Fun Food Tour Around Jeju
It's easy to see why tile fish, hairtail and mackerel, among other fish and marine products, would be so popular on an island such as Jeju, but it's quite something else that black pork is considered a delicacy around these parts.

The black pig has a smallish body with long legs and snout. It has wrinkled face with a straight jaw. It was originally a native Korean breed. There are records that these pigs were raised in Jeju, Ganghwa, Sacheon and Jeongeup, among other places across the country, up until the late Joseon Dynasty. But starting in the 1908, Japan complained of productivity issues with the local breed, and it began cross-breeding black pigs with foreign kinds. It led to a dramatic decrease in the native black pig population, to the point of near extinction. Similar things happened with cows and dogs, and many species were lost.
In the late 1980s, research on natural breeds reached its peak. Jeju Livestock Industry Promotion Agency purchased four female pigs and one male pig for pure line breeding. As a result, it sent more than 7,000 pigs to farms, and it is preserving 265 others (as of December 2017). These black pigs and the agency are collectively state-designated natural monument No. 550.
Jeju black pigs aren't entirely native to Korea. The pure breeds just don't have the feed efficiency. In Jeju, as long as finances permit it, black pigs that are as close to being native as possible are being raised. So it's not much of a stretch to call these pigs native or local breeds. Yang Hee-joo, author of  <Adventures Through Jeju Delicacies>, said, "Strictly speaking, they're not pure breeds. But in breeding, the mating ratio was such that there was plenty of the pure breed there, and the quality of meat is the closest it can be to the native breed. If you had to rank it, it may not be at the very top but it's close enough." 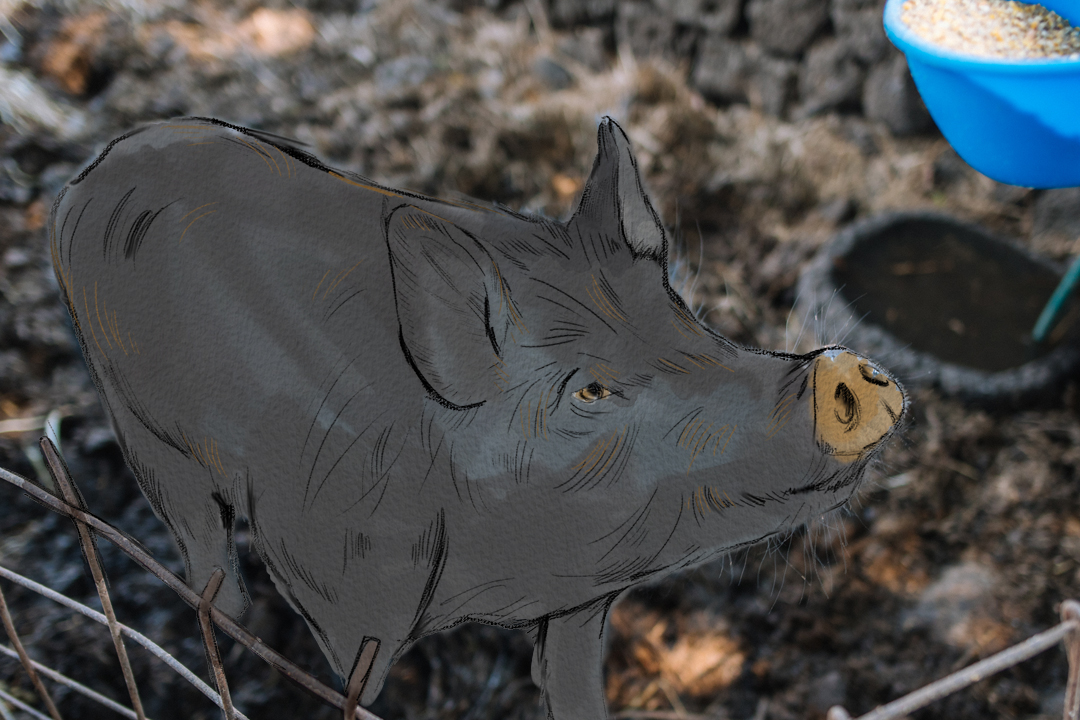 Place of Pig in Our History
People are believed to have started raising pigs around B.C. 10,000~6,000. Pigs first came up in Korea during the Paleolithic Age. Boar bones and fossils were discovered in Komun Moru Cave in South Pyongan, Mt. Seungri in Deokcheo and Durubong Peak in Cheongwon, North Chungcheong. From relics of the Neolithic Age, bones for dogs and pigs were uncovered together. It's believed that wild boars were began to be domesticated around this time. Our forefathers have long had close ties with pigs. A section on Dongyi in <Book of the Later Han> chronicles the story behind King Dongmyeong's founding of Buyeo. The king of Saekri ended up in jail after attempting to kill a pregnant maid, and Dongmyeong was born soon after. The king sent Dongmyeong to a pigsty to kill him but a pig breathed life into the baby. It shows people raised pigs in pigsties. Goguryeo also raised boars. A chapter on Goguryeo in <The History of the Northern Dynasties> offers this explanation of marriage customs in Goguryeo. "When a man and a woman love each other, they're to be married immediately. The groom's family sends pork and drink, but nothing else. If someone in the bride's family receives some gifts, then people will think it's shameful and accuse that family of selling off their daughter." In addition to their modest wedding customs, it's also easy to see how important pigs were in the life of Goguryeo people.
<The Chronicles of the Three Kingdoms> contains a section on people getting punished for severing leg muscles of a sacrificial pig. The Korean word for 'sacrifice' originally meant an offering to gods during a memorial service. From the term 'heesaeng' the first syllable of 'hee' meant a white cow without any spots, and 'saeng' was the dead offering. Over time, the term evolved to include prisoners of war among others. The Chinese character for a cow shows that in China, cows were used for sacrificial purposes. That Goguryeo used pigs is fascinating. 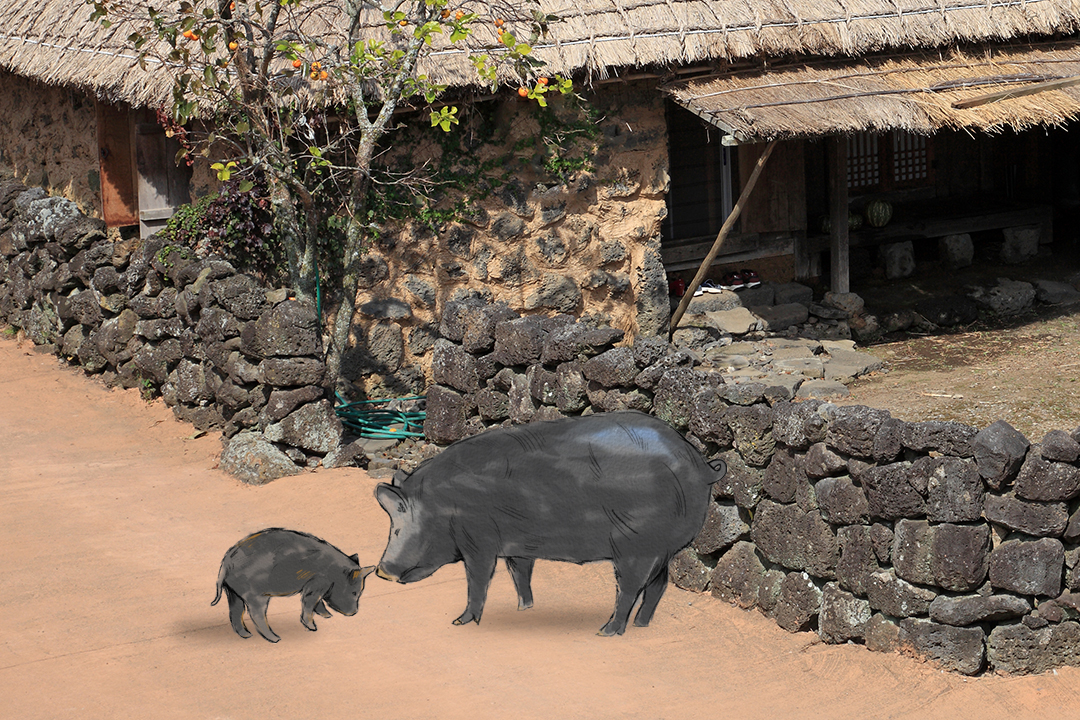 Black pigs are smaller than enhanced breed and they consume more feed while having fewer baby pigs. But for people of Jeju, black pigs are a source of pride. They say it's difficult to find other breeds that can replace black pigs and their chewy texture. 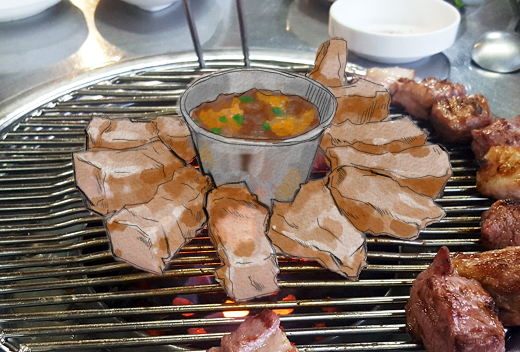 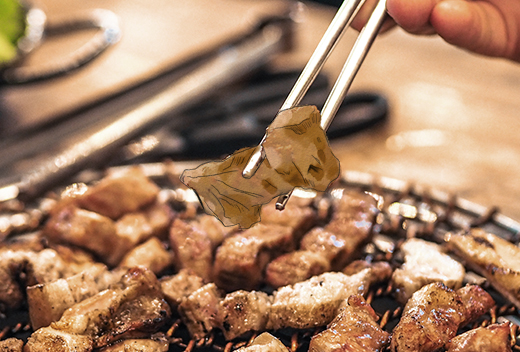 Black pork's fat is chewy and savory. You can have eat it grilled or boiled.

Variations of Black Pork
So is there a special way to enjoy Jeju black pork? Just follow the local way. You're supposed to dip Jeju black pork in fermented salted anchovies. Unseasoned ribs are especially popular. Black pork is typically grilled over charcoal, but places that serve thick meat use briquettes. Traditionally, black pork was boiled, not grilled. In Jeju, you can enjoy the local styles for bossam (boiled pork with wraps) and jokbal (pig trotters). In their local dialect, they're called dombe gogi and agangbal. Dombe means 'cutting board' and agangbal means 'trotters of a young pig.'
Back in the days, Jeju didn't have much to eat. Their soils weren't fertile enough for farming, and they acquired their food from the sea. Pork was reserved for special occasions, not for everyday meals. And in Jeju, people raised and butchered pigs for weddings. Parties were thrown for whole families when pork was there. And it was a matter of great importance to serve everyone an equal amount of boiled meat. One of the elder statesmen in the family had the honor. He would ration the meat, and also serve 'momguk,' pork soup with gulfweed. Only one person got the special treatment and that was the bride. She always got the soup with back ribs.
When you think of pork broth in Jeju, most of you would associate it with pork noodle soup. The soup is a mix of thick pork broth with anchovy broth. All restaurants have different ratios of these two in their soup. In Jeju, even yukgaejang, a spicy meat soup typically made with beef, comes with pork. With the Jeju style of yukgaejang, the soup is boiled until pig bones and bracket turn soft. Pigs are so precious that their intestines aren't just thrown away, either. Sundae (blood sauage) in Jeju is different from the one from inland, in its flavor and taste. Pigs' intestines are stuffed with ground barley, millet or buckwheat. There's plenty of seonji (clotted blood), too. For the uninitiated, this could taste too dry. But Jeju locals love their sundae with soy sauce. In other variations, you can get hot sundae soup with rice or noodle.
There are many different ways in which you can sample pork in Jeju. The greatest of them all just might be 'yeot' (taffy). Jeju makes yeot with pheasant. It may be the most famous type of Jeju-style yeot, but it also comes with pork and chicken. Pork yeot -- boiled in barley malt and torn into strips -- is absolutely the ultimate in what Jeju tries to accomplish with its delicacies.