Michelin-Approved Sesame Oil
Does sesame oil only go with Korean dishes? Queens Bucket’s sesame oil is taking a stride toward globalization, dreaming to be the next olive oil.
Sesame oil has shown off its presence in Korean cuisine, playing an important supporting role in many recipes. When seasoning vegetables or making bibimbap, a few drops of sesame oil are enough to add savory aroma to the dishes. Looking back, I remember the whole village smelled like sesame oil when the local mill was extracting sesame oil. The strong aroma of sesame oil actually prevents it from being used in certain dishes highlighting the native flavor of ingredients. Recently I heard there was a special kind of sesame oil used as a salad dressing. Enter Queens Bucket. 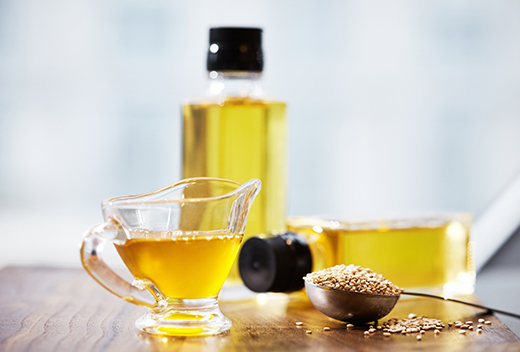 “The aroma wasn’t too overbearing as the existing sesame oil, and the flavor was fresh. I thought there must be consumers looking for this kind of sesame oil.”

Park Jeong-yong, CEO of Queens Bucket
Nutty Sesame Oil
“I didn’t plan to start the sesame oil business from the beginning. I was merely interested in the machinery used for extracting sesame oil.” Queens Bucket was launched by CEO Park Jeong-yong who questioned the standardized sesame oil extraction method, having worked in local specialty business for three years. With the mechanization of the food industry, the hot pressing method has become a standard in sesame oil production. Sesame oil is attainable by separating fat from the fibers of sesame seeds. Since it is difficult to do so using only pressure, sesame seeds are roasted at a high temperature. In this process, the temperature decides the quality of products. If you use high heat, you get better productive efficiency and the oil with stronger flavor and aroma. It is how sesame oil that we are familiar with is made. However, the heat could destroy nutrients in sesame seeds or generate harmful chemicals if the seeds are burnt. 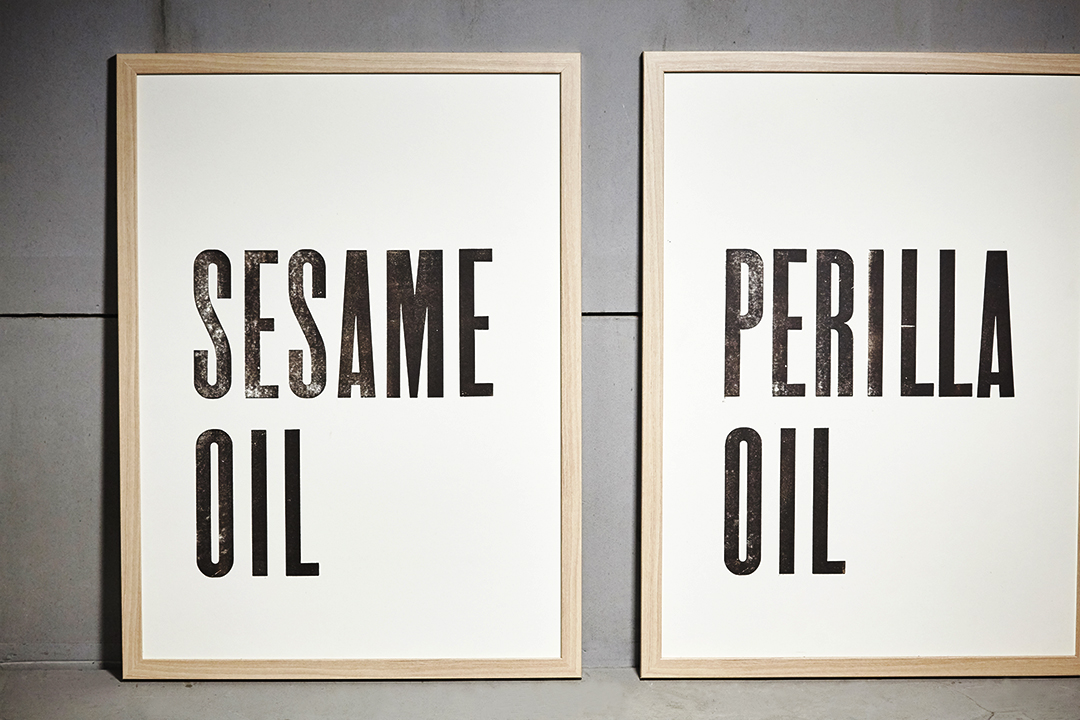 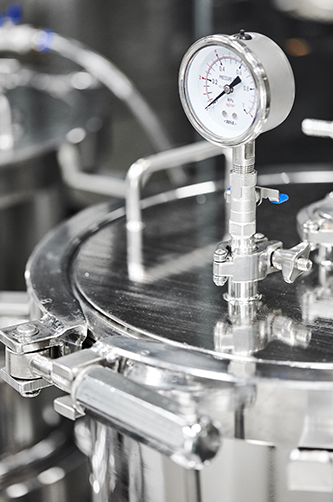 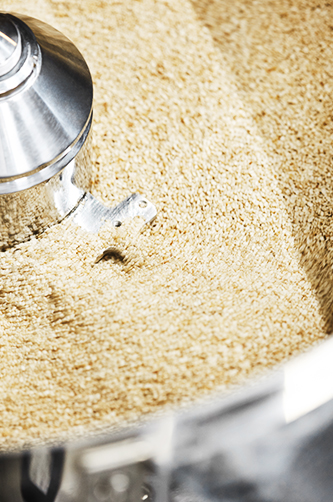 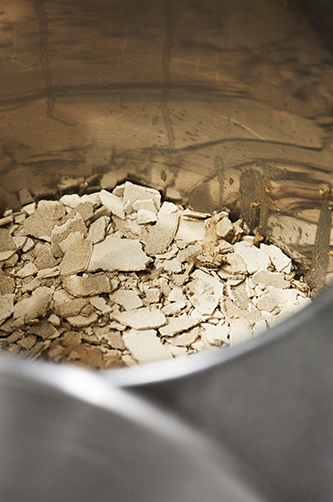 You can see how sesame oil is made at Queens Bucket's urban factory.

Park thought of cold pressing as an alternative. It is similar to how olive oil is extracted. He went to machinery manufacturers in Germany and Denmark to check out oil extraction machines, imported the most suitable model he found, and went through trial and error with oil extraction for about a year since 2012. From the construction of production facilities to the machinery setup, every single step was new to him and required adjustment. It wasn’t an easy journey but the end result was satisfactory. The filtering system he adopted prevented precipitation and the color of the oil was clear yellow. By roasting at a low temperature, the destruction of nutrients was minimized. “The first-ever batch of sesame oil tasted so good. The aroma wasn’t too overbearing as the existing sesame oil, and the flavor was fresh. I thought there must be consumers looking for this kind of sesame oil.” With this nutty sesame oil, premium natural oil brand Queens Bucket opened a small mill in Yeoksam-dong, southern Seoul, in 2013. 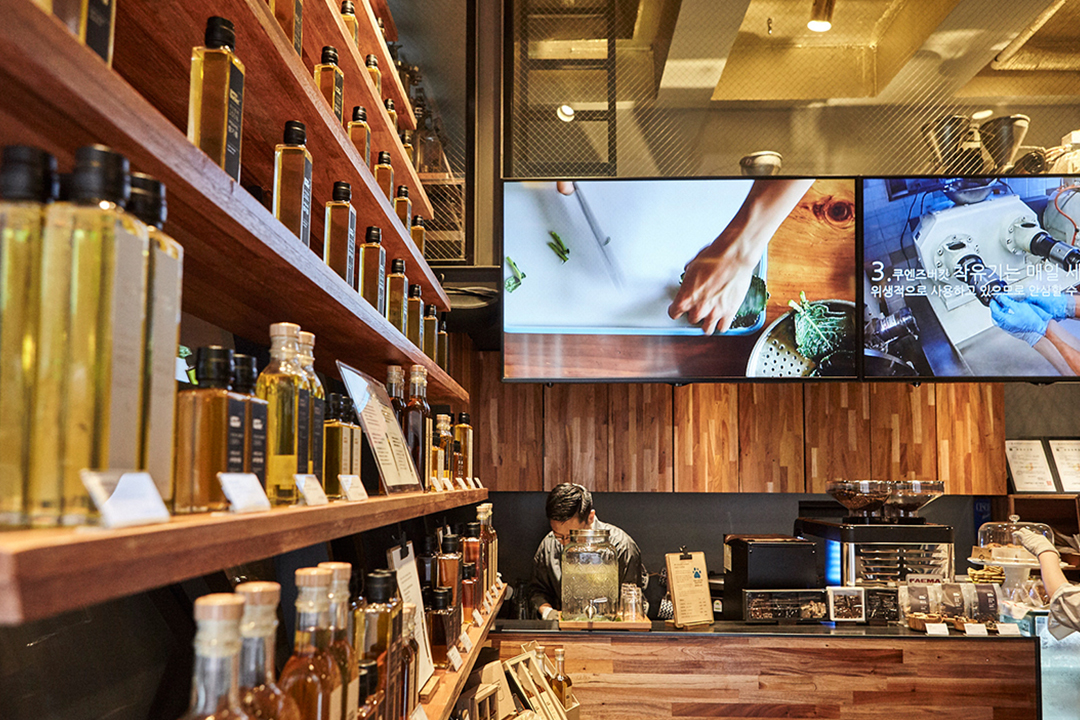 Inside the first floor at Queens Bucket's urban factory

Could Sesame Oil Become Favorite Food?
Among the customers who were new to Queens Bucket, some complained about the fact that the oil did not taste the same as the ones they were accustomed to. Cold-pressed sesame oil makes you feel like you’re chewing sesame seeds. It is different from hot-pressed sesame oil that accentuates the roasted flavor. Cold pressing highlights the flavor and aroma of the original food. Park compares sesame oil to coffee. “As people began enjoying coffee, they got to learn that coffee beans carry different flavors and aromas, and even the same beans taste differently depending on where they come from. Sesame seeds are like beans. Like coffee, they taste differently depending on their variety and origin.” Queens Bucket maintains consistency in product quality by contracting with local farmers and taking part in the cultivation process, starting with the selection of seeds to the harvest. In addition, the company advocates production in small quantities under expert care, hoping to present locally-grown items in the future. Currently, Queens Bucket has two main product categories of sesame oil and perilla oil, which include cold-pressed sesame oil and perilla oil extracted from the unroasted seeds and black sesame oil using black sesame seeds. 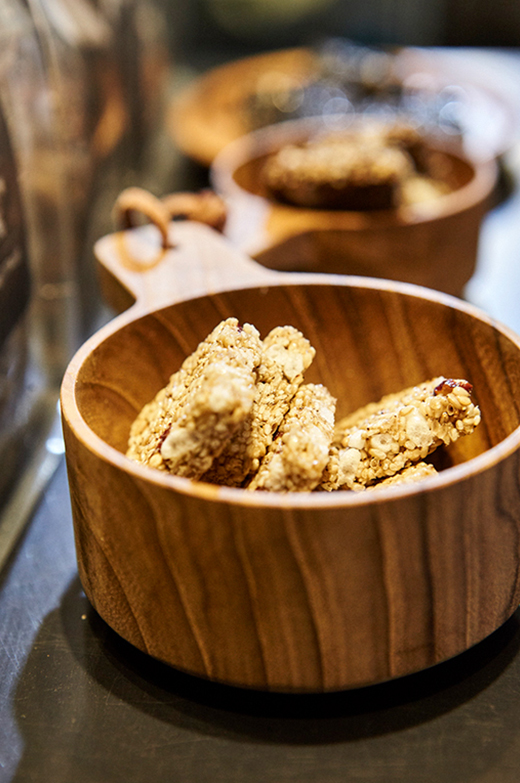 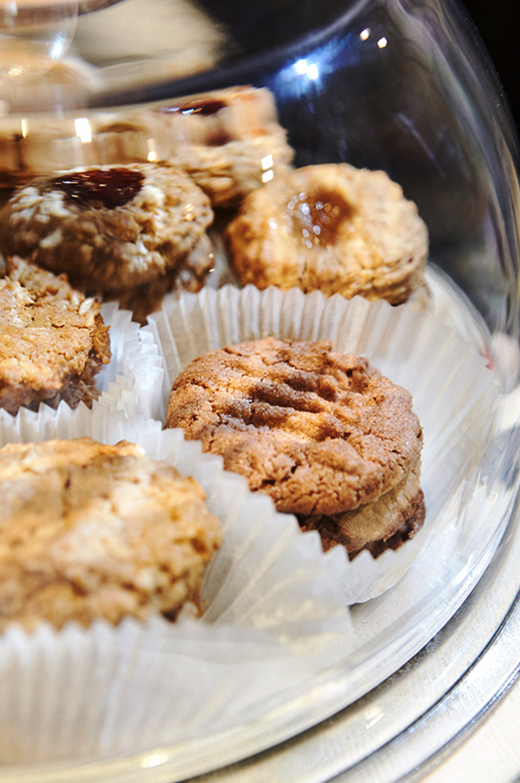 New and unfamiliar, Queens Bucket’s sesame oil still draws people in. Those who’ve tasted their oil keep going back. Many of them recommend Queens Bucket to other people, voluntarily joining in the word of mouth. Queens Bucket products are being used in not just ordinary households, but also Michelin-approved Korean restaurants such as Mingles and KwonSookSoo, as well as Dammi and Ilsang Dammi restaurants owned by Korean cook Shim Young-soon. Park has future plans already in place as he tries not to settle. His dream is for sesame oil to become the next olive oil, which is known as the healthiest vegetable oil. “Instead of settling at sesame oil and perilla oil, I would like to see the category of fat become more specialized. Most people think negatively of fat, but it is a basic element affecting people’s brain function, growth, and immunity. The overseas market has seen a huge growth of the “fat” industry, quality-wise. Sesame oil is just as healthy as olive oil. I wish Koreans will reevaluate fat and form a market where people buy sesame oil as their favorite food item.”

Extract in the Morning, Serve in the Evening
In foreign countries, sesame oil is getting positive responses. Until recently, the strong aroma of sesame oil prevented cooks from using it for foreign recipes. However, after sampling the oil made by Queens Bucket, Western chefs found it not so strange, rather enjoying its nutty flavor, according to Park. “It tastes like vegetable oil with a touch of animal fat. It is nutty and can even replace nuts as it poses no allergic threat.” The Queens Bucket store has a sampling of their “sesame butter” made from sesame dregs (not available for purchase) and it tastes and feels like peanut butter. Instead of using sesame oil or perilla oil only for Korean cuisine, Queens Bucket is carrying out various projects, such as marketing sesame oil basil pesto made in collaboration with chef Lee Soo-boo. 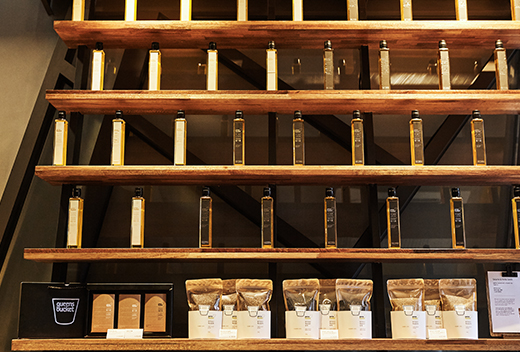 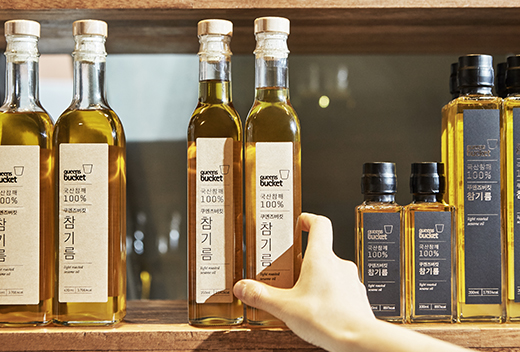 Sesame oil and perilla oil on display in the first floor

In March 2019, Queens Bucket opened a small “urban” factory in Dongdaemun, central Seoul, featuring their upgraded technology. The five-storey building, one underground and four above, allows visitors to see the entire process of oil extraction. Unlike the oil displayed in the market after going through mass production and distribution processes, you can get the sesame oil freshly extracted and bottled before your own eyes. Imagine a life where you can prepare the dinner with the sesame oil produced in the morning. In today’s society where buying food is not just for eating purposes but also for personal pleasure and satisfaction, we now have a wider selection of sesame oil to consider. If you are curious to know more about sesame oil and perilla oil that can be used with salads and pastas, or even for raw consumption, go visit Queens Bucket.